On Saturday I realized that I had planned my visit to Little Bighorn Battlefield two days before the anniversary of the battle—which meant I would be there on the weekend closest to the anniversary. I figured there would be reenactments and ceremonies and a lot of visitors, but there wasn’t anything I could do about it at this point except get there early.

The park opened at 8:00, and I arrived around 8:04. It cost $25 to get in, which surprised me. I entered the visitor center but then decided to see the battlefield itself before the crowds and heat arrived. I walked up Last Stand Hill past the Indian Memorial, to the 7th Cavalry Memorial. There was one other guy in the area, but he soon left, so for about 10 minutes I had the hill to myself. Later in the day, there were always at least 40 people  crowded around the monument and even more during the expected reenactment. 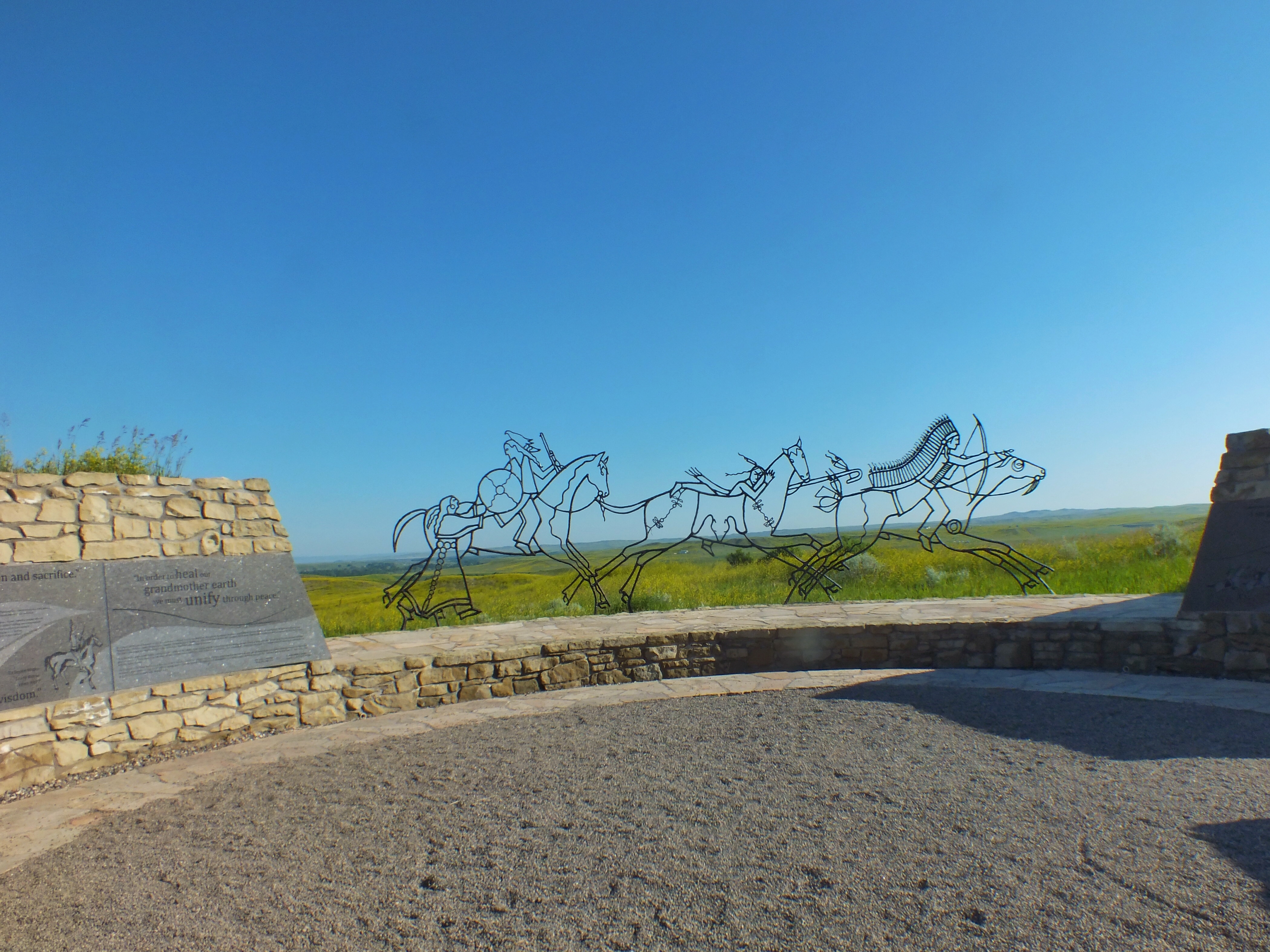 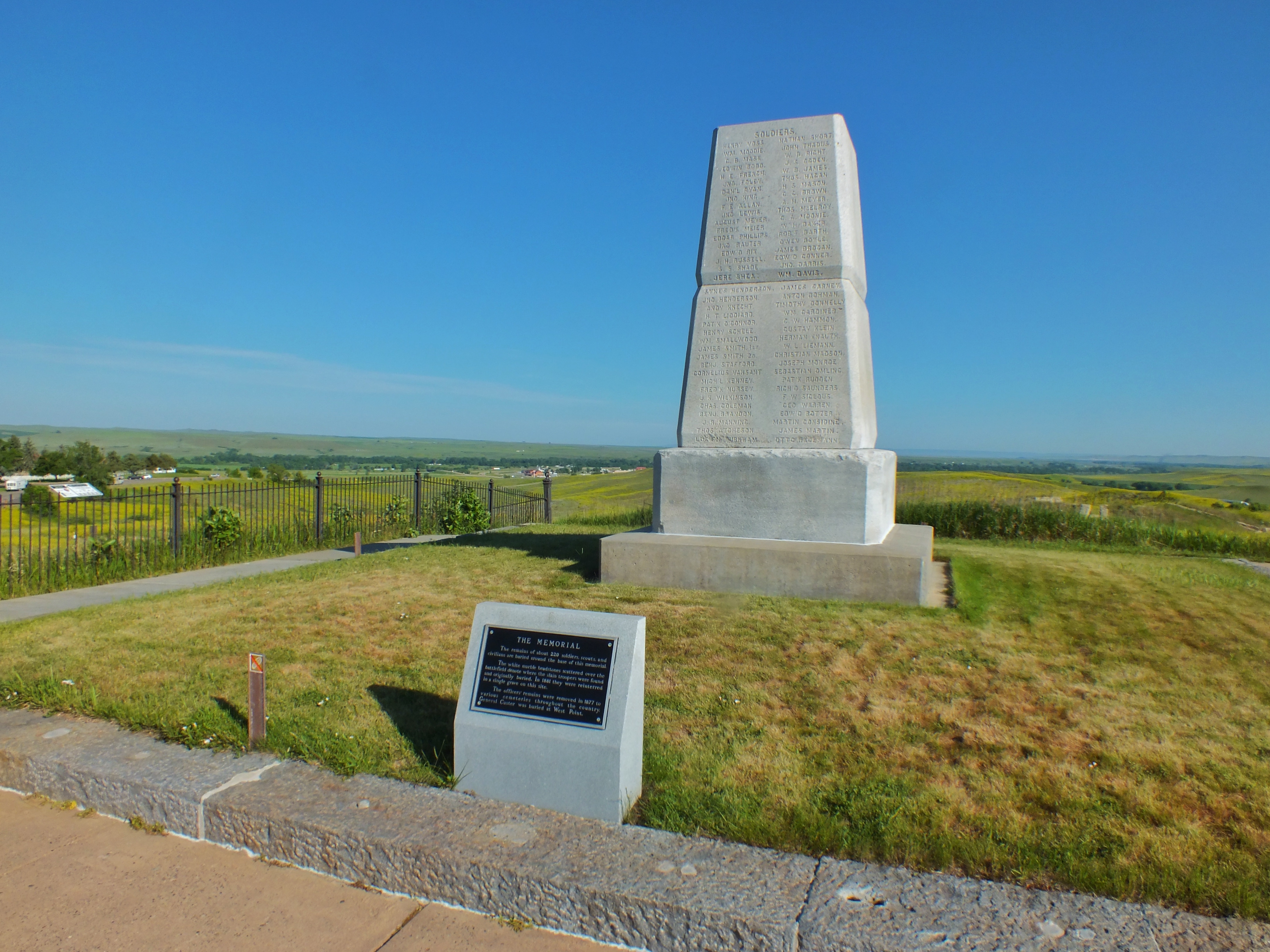 In the next photo, the visitor center is in the right distance. The deep ravine can be seen as a darker line of green leading toward the distant trees left of center. Custer’s marker is the one with black paint in the center of the cluster. These aren’t gravestones. Many of the men were moved elsewhere—Custer is buried at West Point. Others are buried under the 7th Cavalry Monument. The stones mark where the soldiers’ bodies were found. 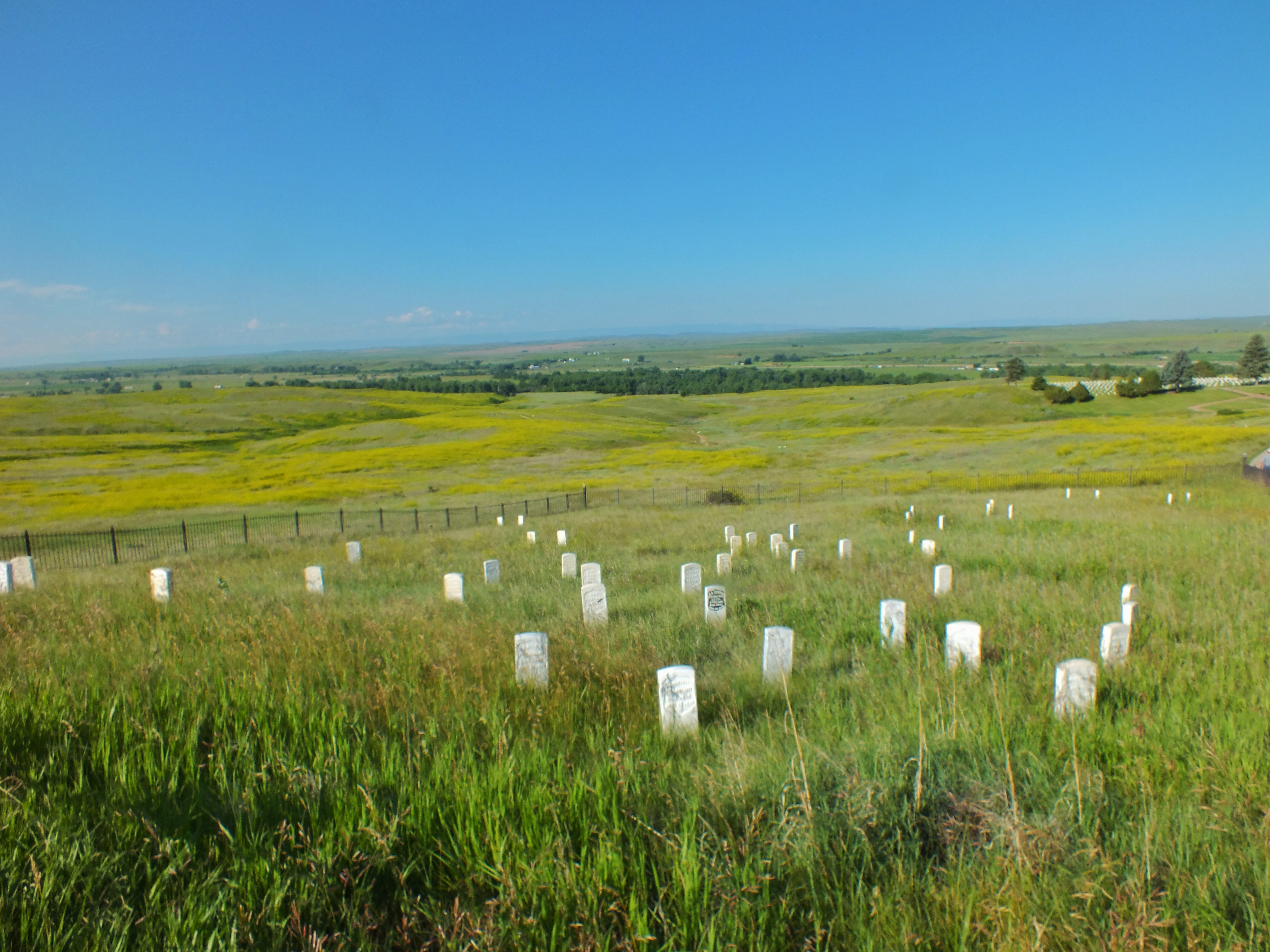 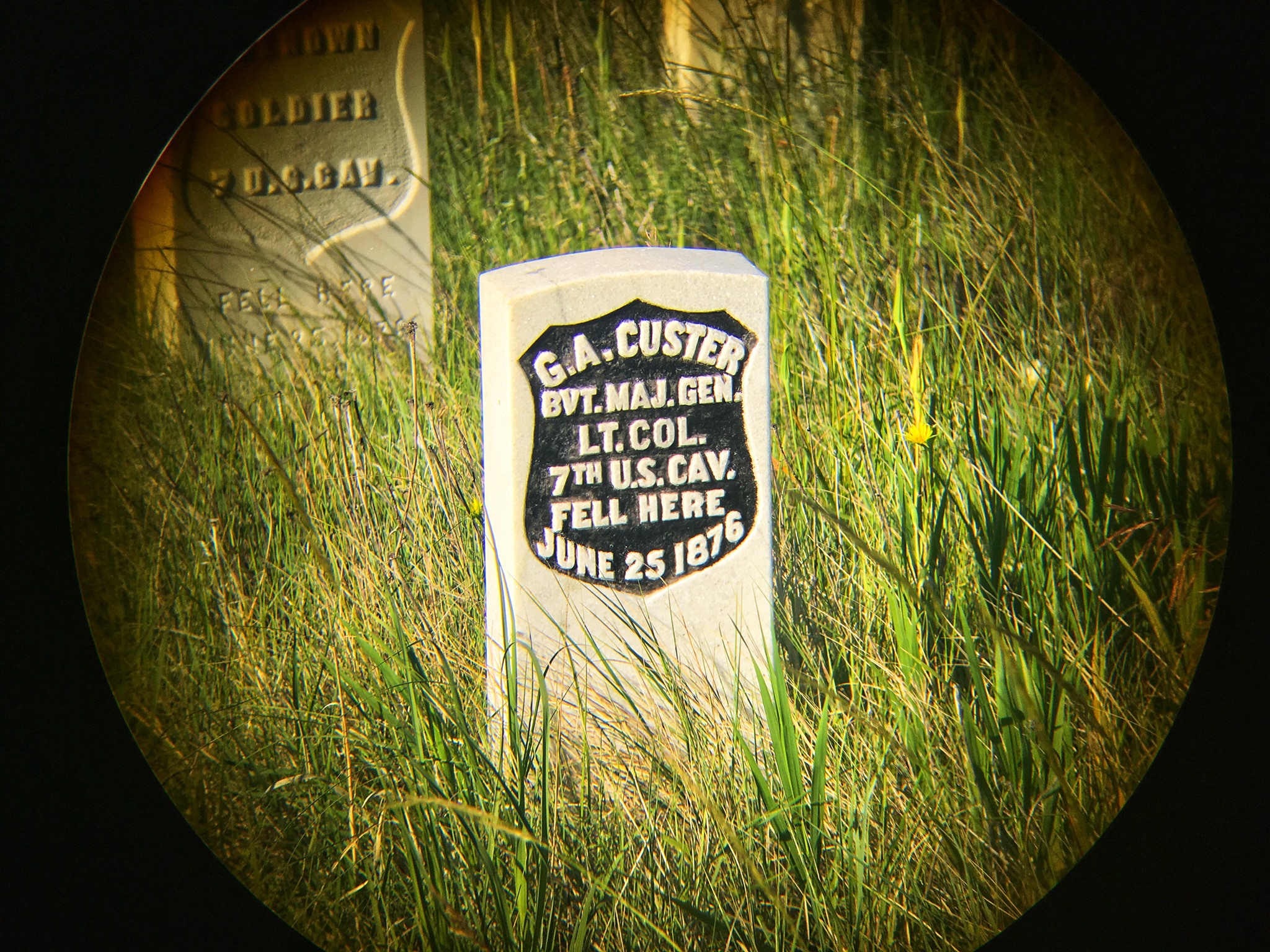 From Last Stand Hill I walked the Deep Ravine Trail. Three guys in yellow vests were spraying something on the vegetation along the path, but for the most part I was alone here too until the very end. The next six photos were taken on that trail.

I once read a book titled Custer Fell Here that contained pictures of the battlefield taken over the years alongside more recent ones. It was interesting, but I made fun of the author because he kept referring to the four-foot black fence around the last stand area. Now I understand. The battlefield sprawls over treeless rolling hills that all look very similar. Points of reference are the cluster of trees around the visitor center, the river valley, and the Last Stand Monument and fence. Without looking for these landmarks, it would very difficult to know where on the battlefield you were. 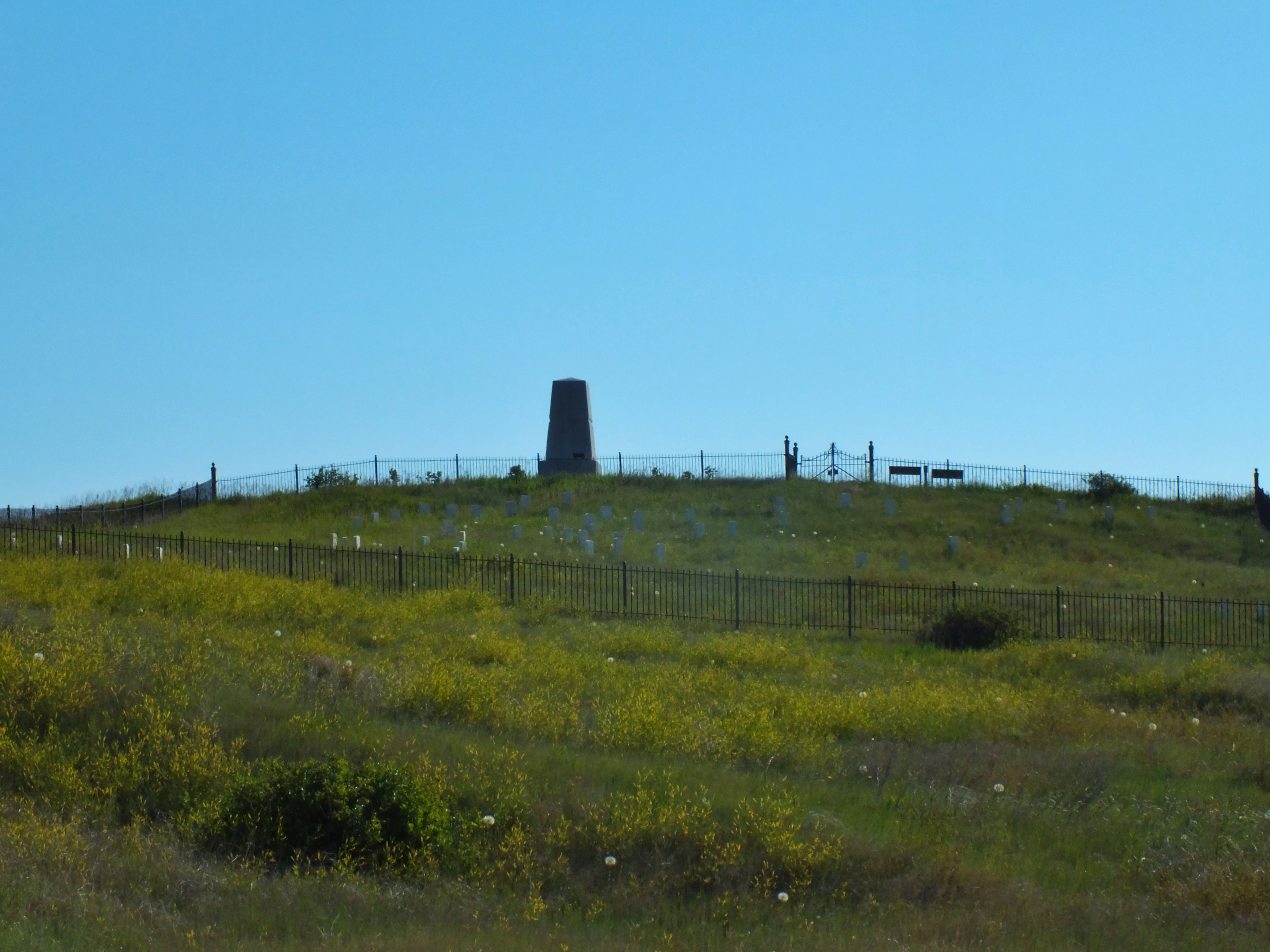 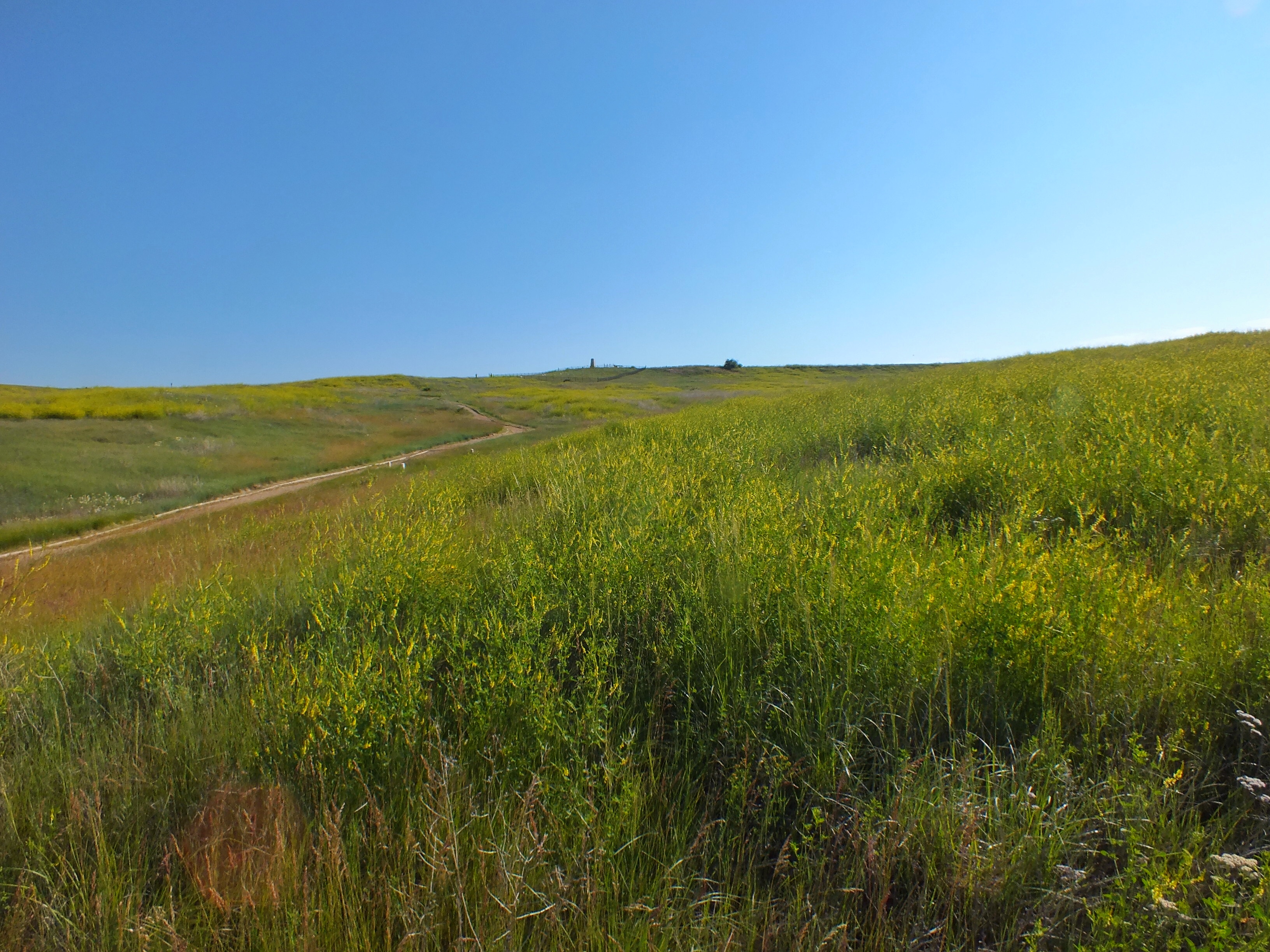 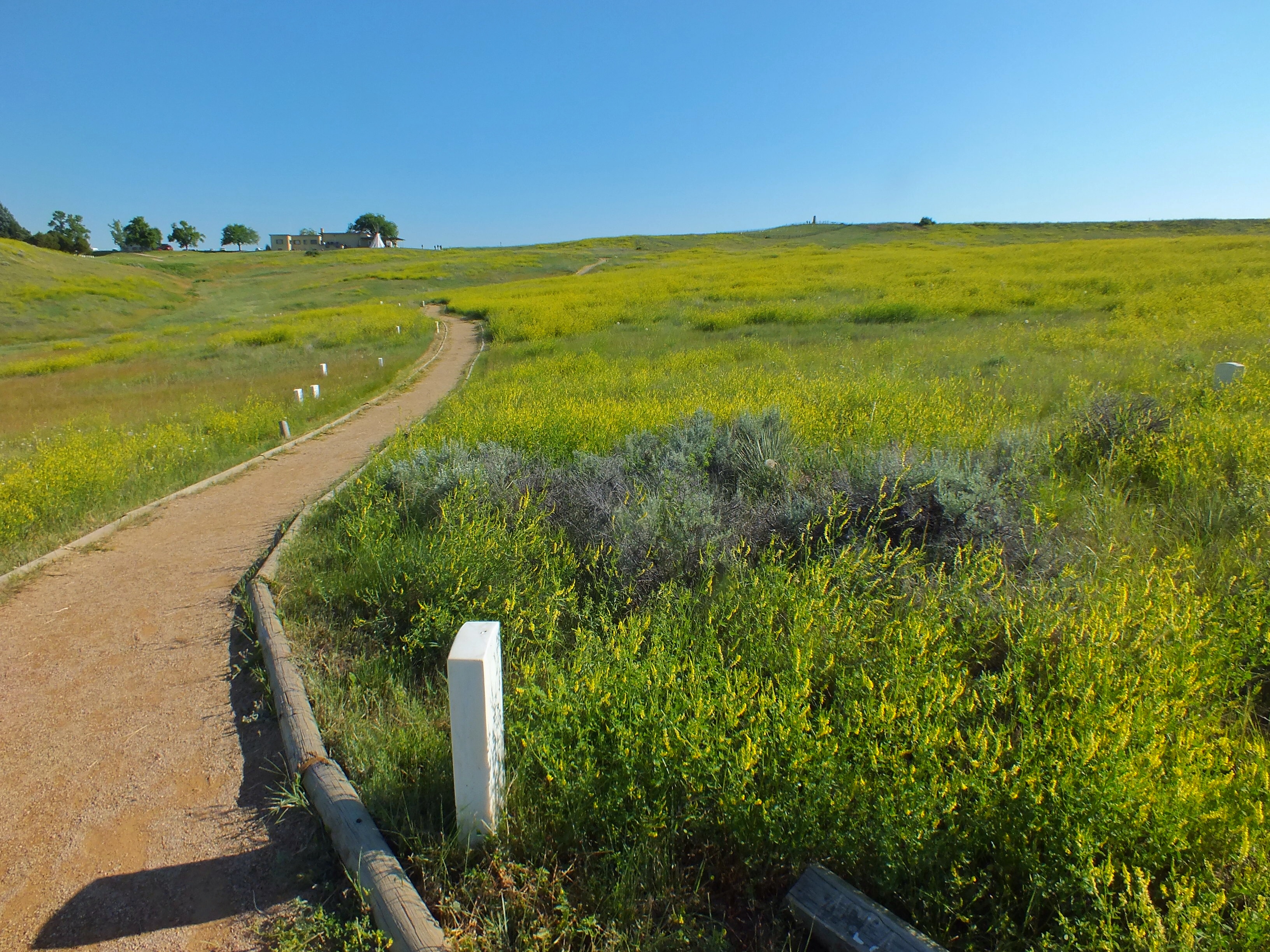 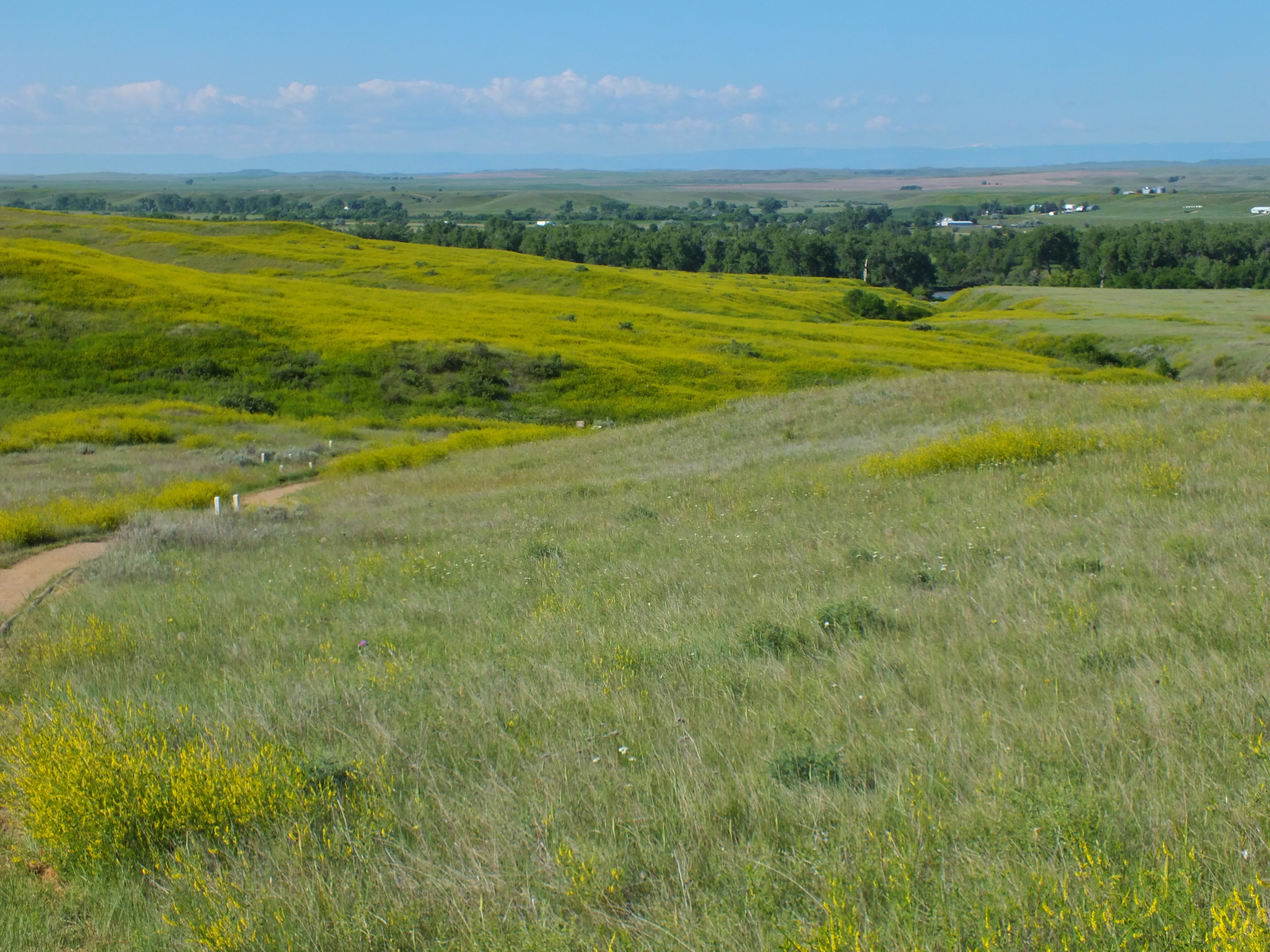 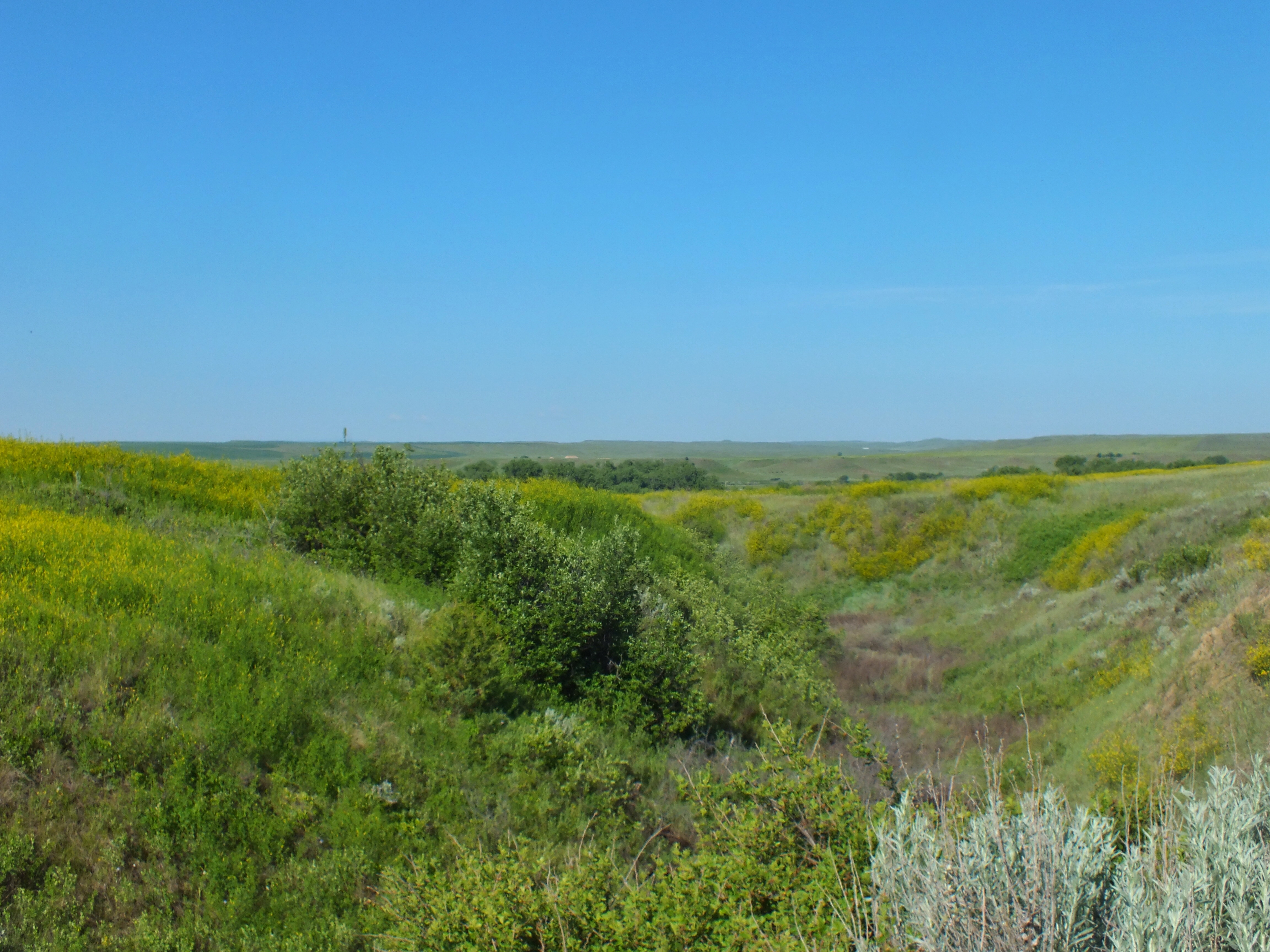 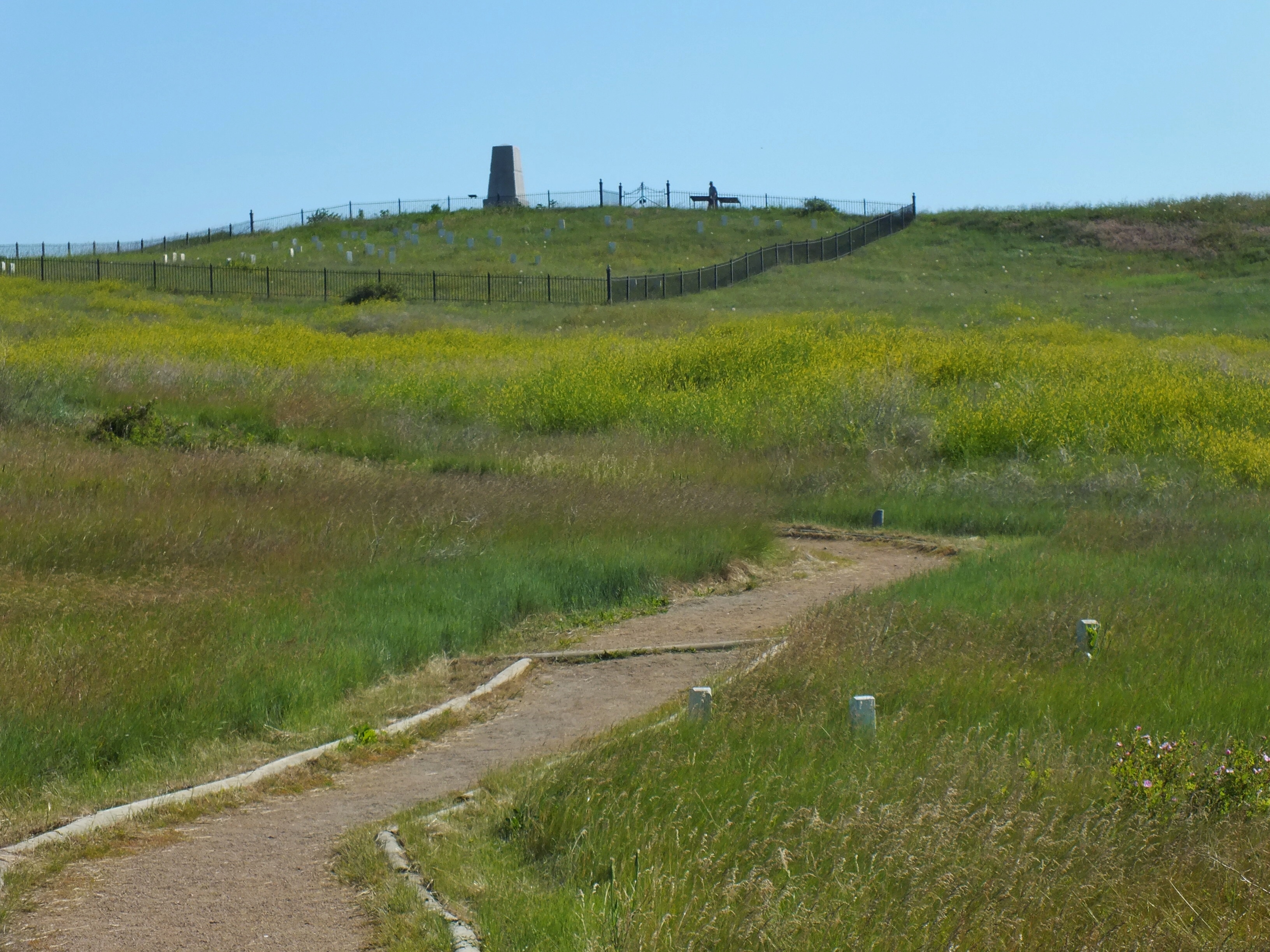 I got back to the visitor center just as a ranger was beginning a talk on the covered patio. I found a post to lean on in the shade. (The sun was already intense.) The guy began by telling us that he had been a history teacher so we would know he was a brilliant authority. Then he told us that we all misunderstood the battle. We all thought there were no survivors when, in fact, thousands of Indians survived. (Of course there wasn’t a single person there who thought all the Indians also died, but that didn’t matter to him. He had a point to make.) He told us that if we had visited in the 1960’s, a park ranger would have told us that Custer and his men were courageous heroes who died for their country in defense of the American way of life. We were allowed to think the soldiers were courageous if we wanted to, but none of the rest of it was true. He then launched into a diatribe on racism. At that point I left. A bit later, I walked through the cemetery where a marker explained how the men buried there were heroes who had died protecting my freedoms in, among other places, the Indian wars. I was a bit confused. Were the soldiers heroes or not? 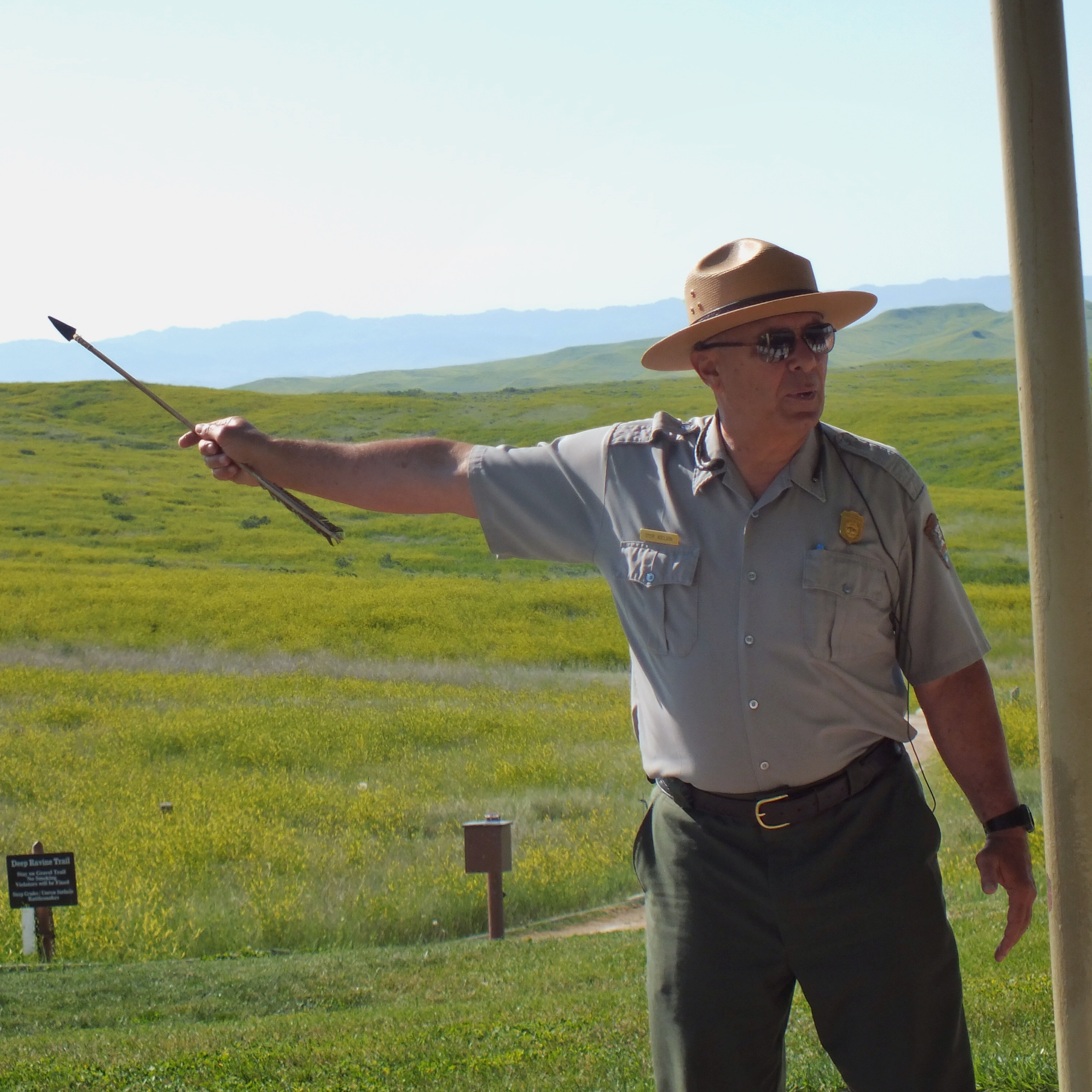 I wasn’t really confused. The National Park Service is in full political correct mode. I wish they would just present the facts and let visitors make up their own minds. But of course the government doesn’t think we’re capable of thinking for ourselves. Here’s my opinion: combatants on both sides were fighting for their ways of life. Both ways of life had good points and bad points. The Indians won the battle, but their culture was unsustainable in the face of developing technology and an increasing world population so they lost the war. There were bad men on both sides. There were also men on both sides who worked hard to find ways for both cultures to coexist peacefully. As bad as it was, maybe it was as good as humans are capable of. I don’t really see any of those who fought here on either side as heroes or villains. The battle was was just another example of humanity’s brokenness. 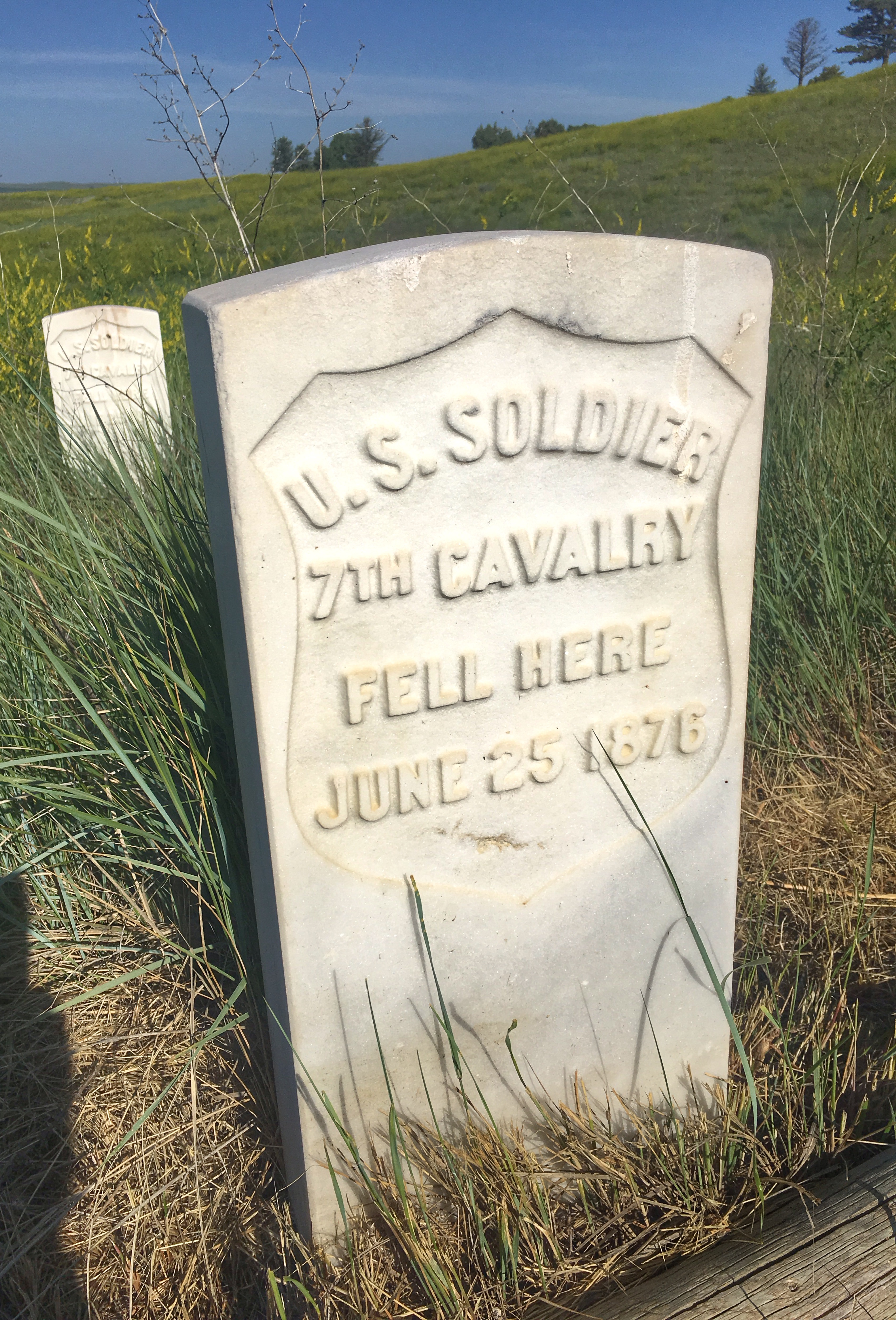 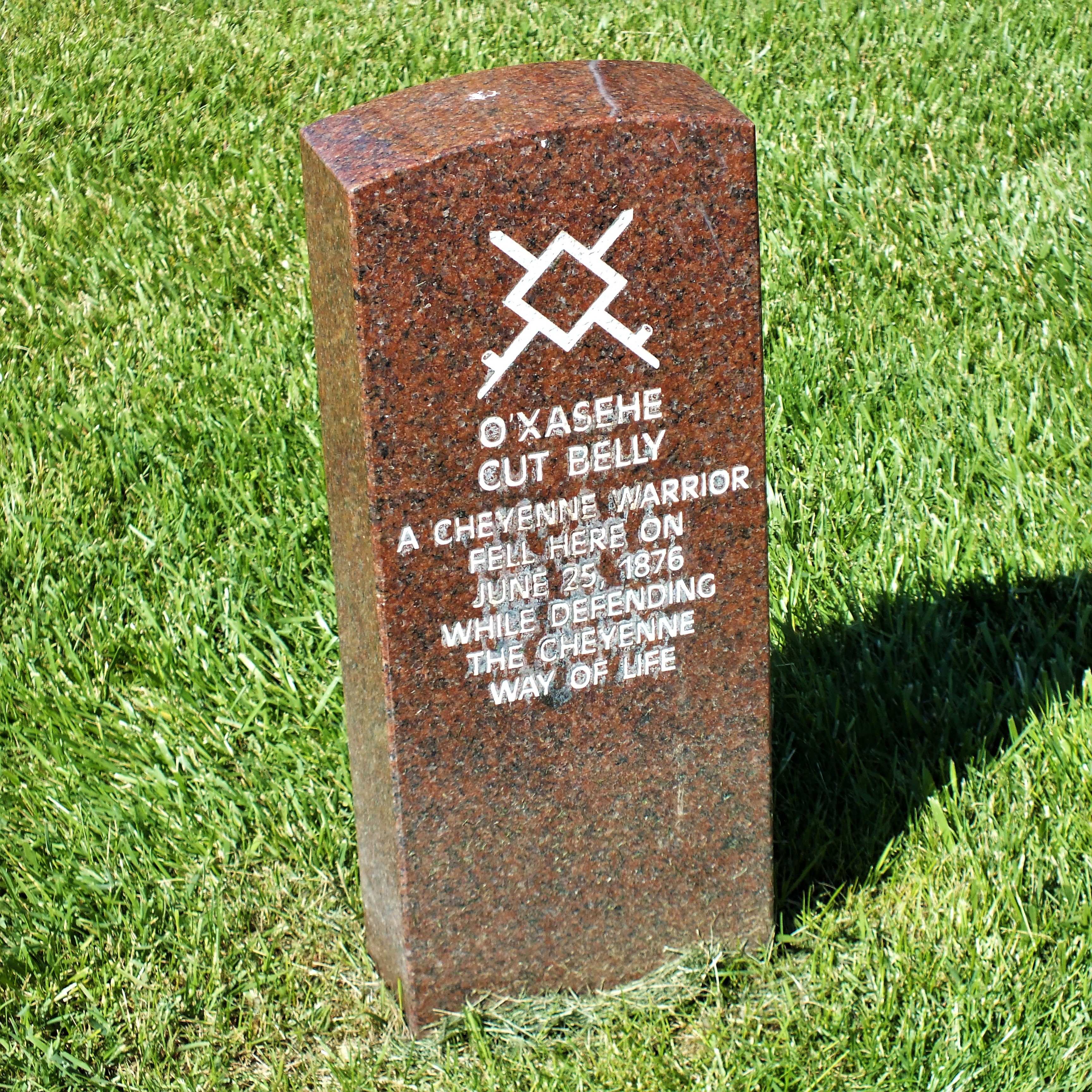 I made a quick trip through the one room of displays in the visitor center, bought a couple hats in the store, then walked through the cemetery. I spotted a nighthawk, which surprised me at that time of day. (It was around 10:00 by this time.) Over the next couple days I saw nighthawks flying at midday in a couple other places. 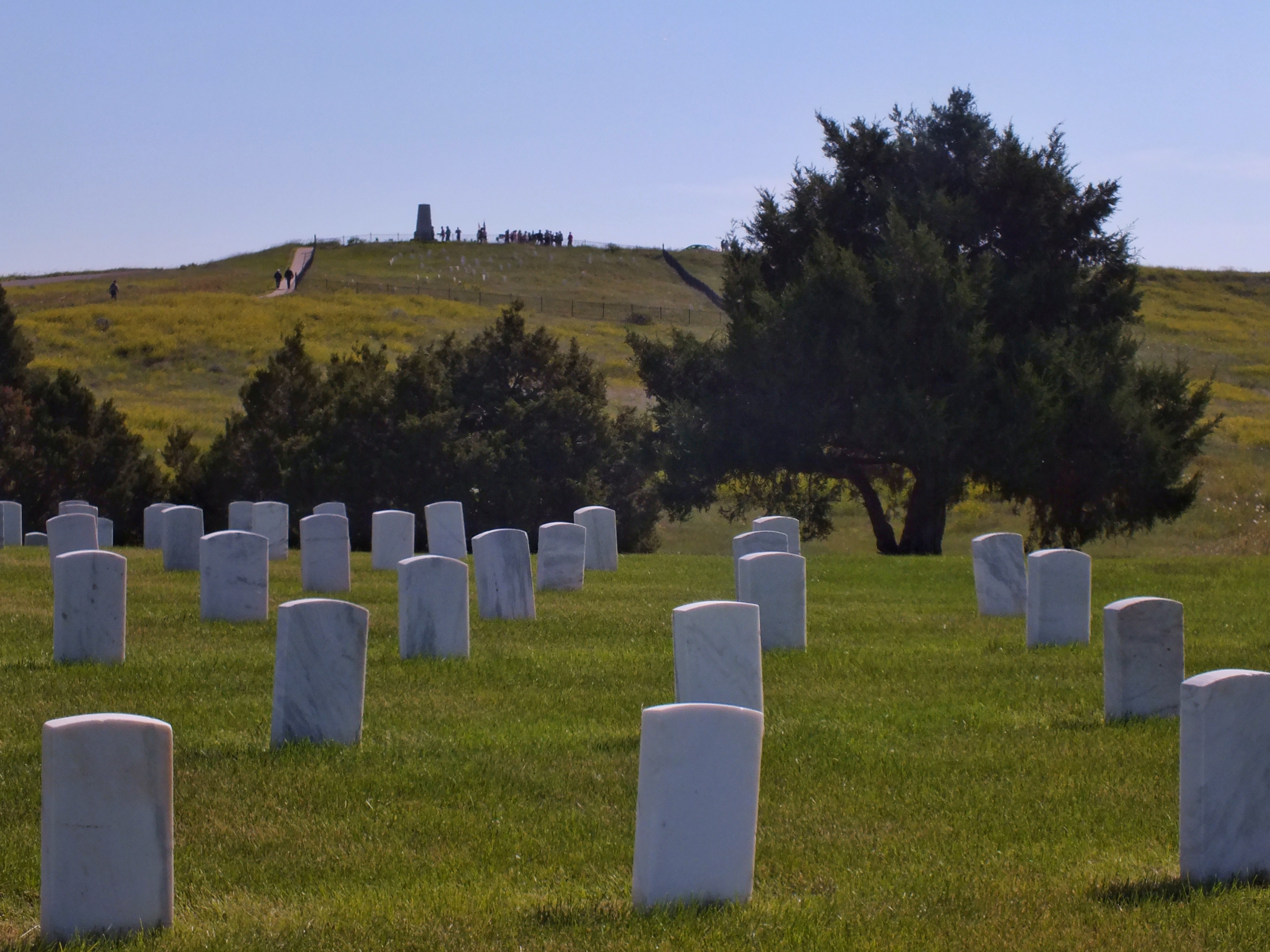 The photo below is a view of the whole battlefield from the cemetery. A bit of the Deep Ravine Trail can be seen right of center. Last Stand Hill is on the left. If you enlarge the photo, you can see the Wolf Mountains in the distance. One of Custer’s Indian scouts climbed to a lookout point in the mountains and spotted the Indian village along the river. On a nearer ridge, you can see a flat-topped butte. That’s Weir Point. Some of Reno’s men made it that far and saw that Custer and the soldiers with him were wiped out. They retreated across Sharpshooter’s Ridge back to the hilltop where Reno and Benteen were besieged. That hill is out of sight behind Weir Point. This gives some idea of the size of the battlefield. I believe I heard that it’s more than four miles from the siege hill to Last Stand Hill.

Last Stand Hill was packed with people as I drove by. I pulled over to allow about seven guys in soldier uniforms to ride past on horses. It wasn’t a very convincing demonstration. One of the riders dropped a piece of equipment and wasn’t familiar enough with horseback riding to get off and get it. A ranger had to pick it up for him. 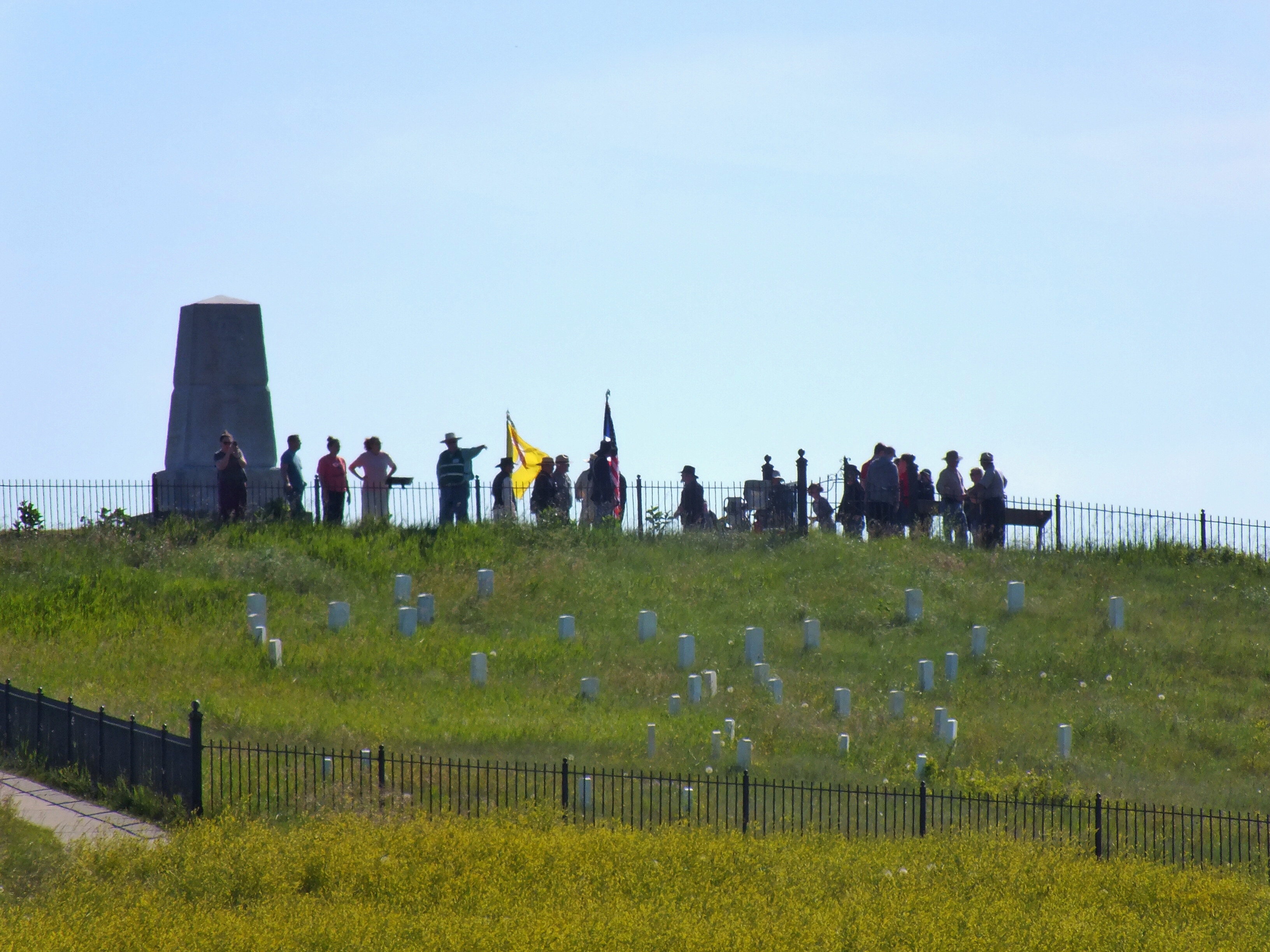 I drove the tour route, stopping at all the pull offs on the right side of the road and taking photos. Most of the battlefield is on the Crow Indian Reservation, but there were tour stops there too. I took the next photo to show some of the markers scattered around the battlefield. The white ones in the distance are soldiers. The two red ones in the foreground are Indians. 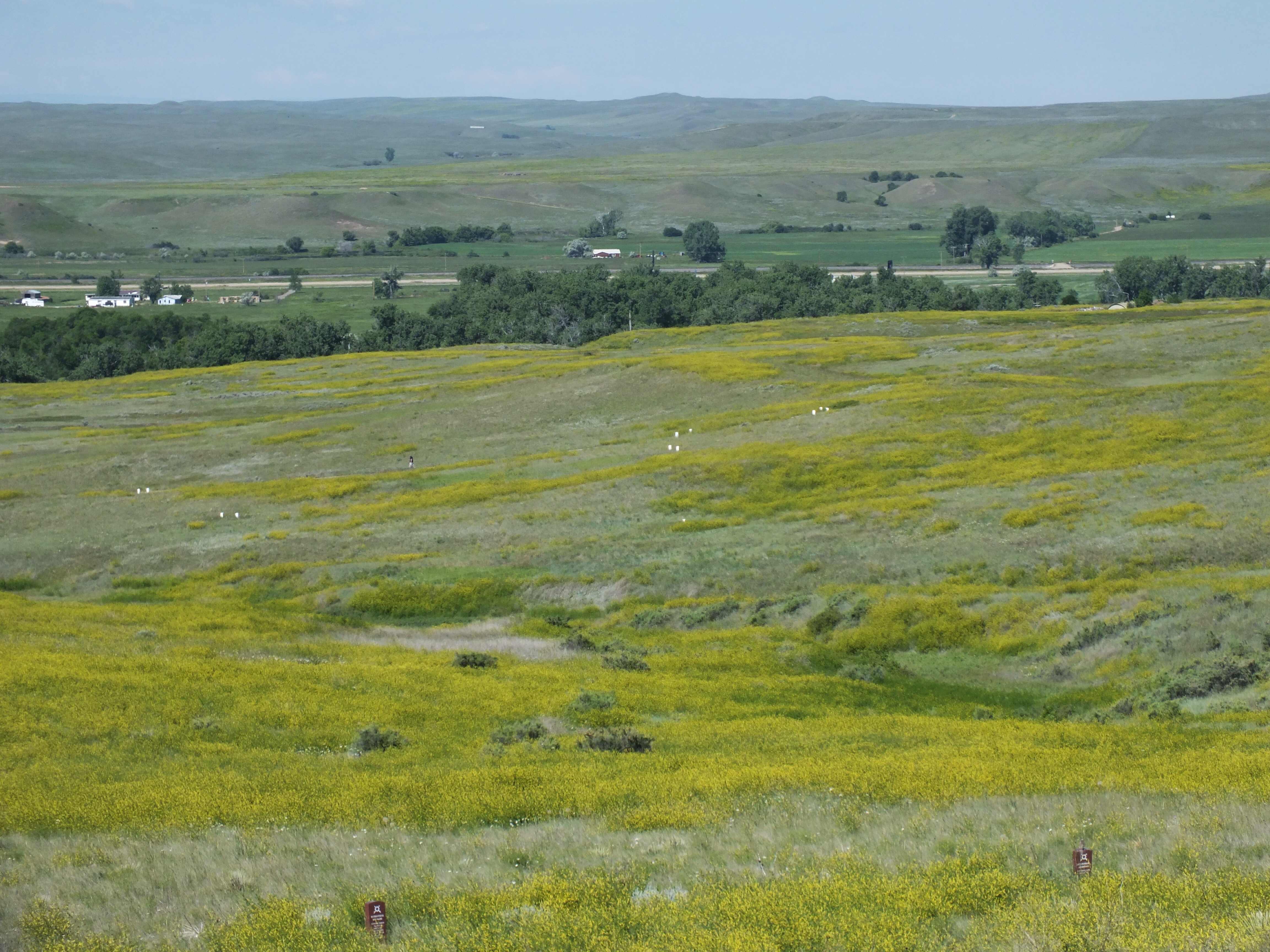 It’s hard to make out in this photo, but the rise beginning on the left and angling into the right distance is Greasy Grass Ridge 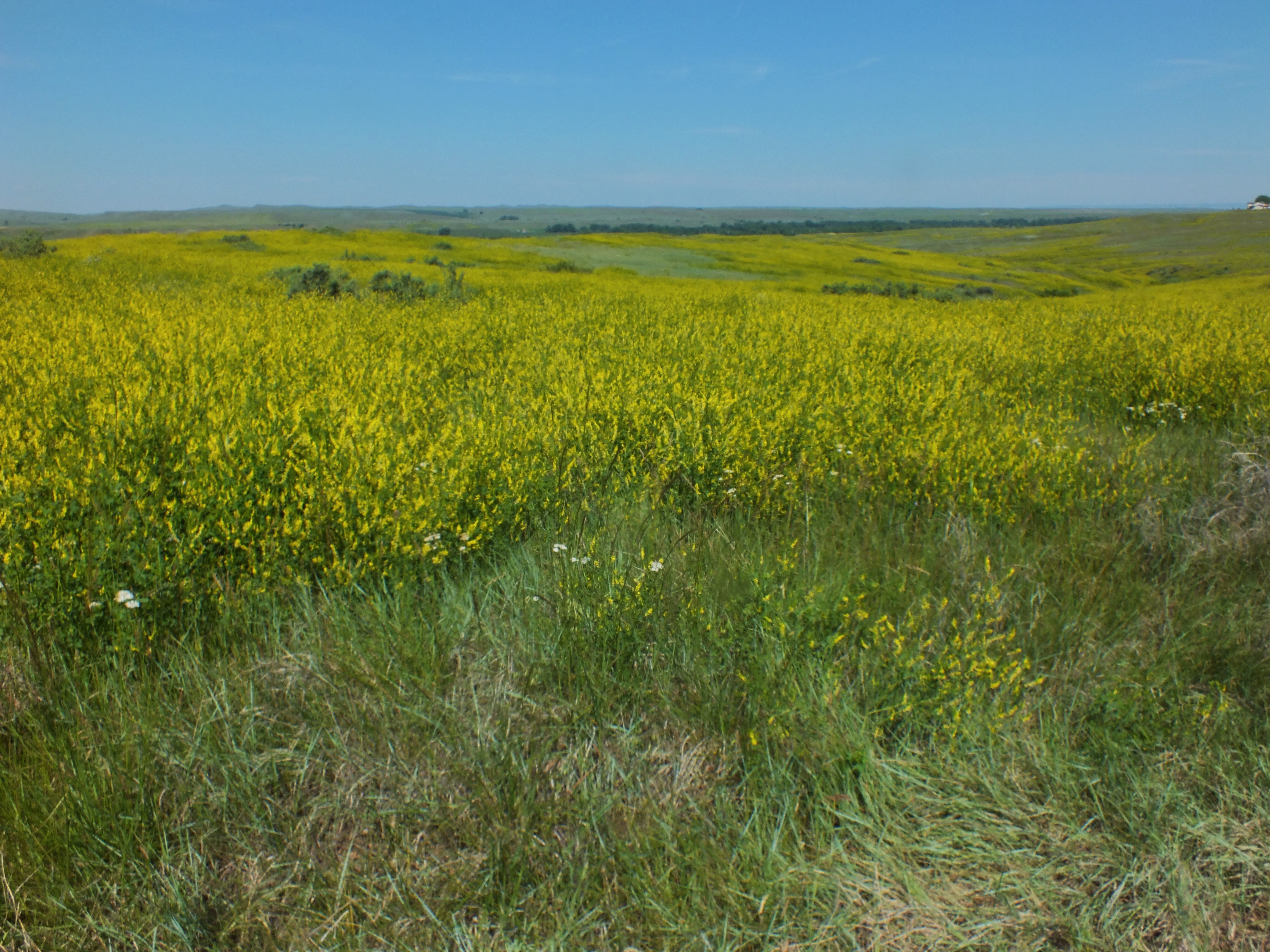 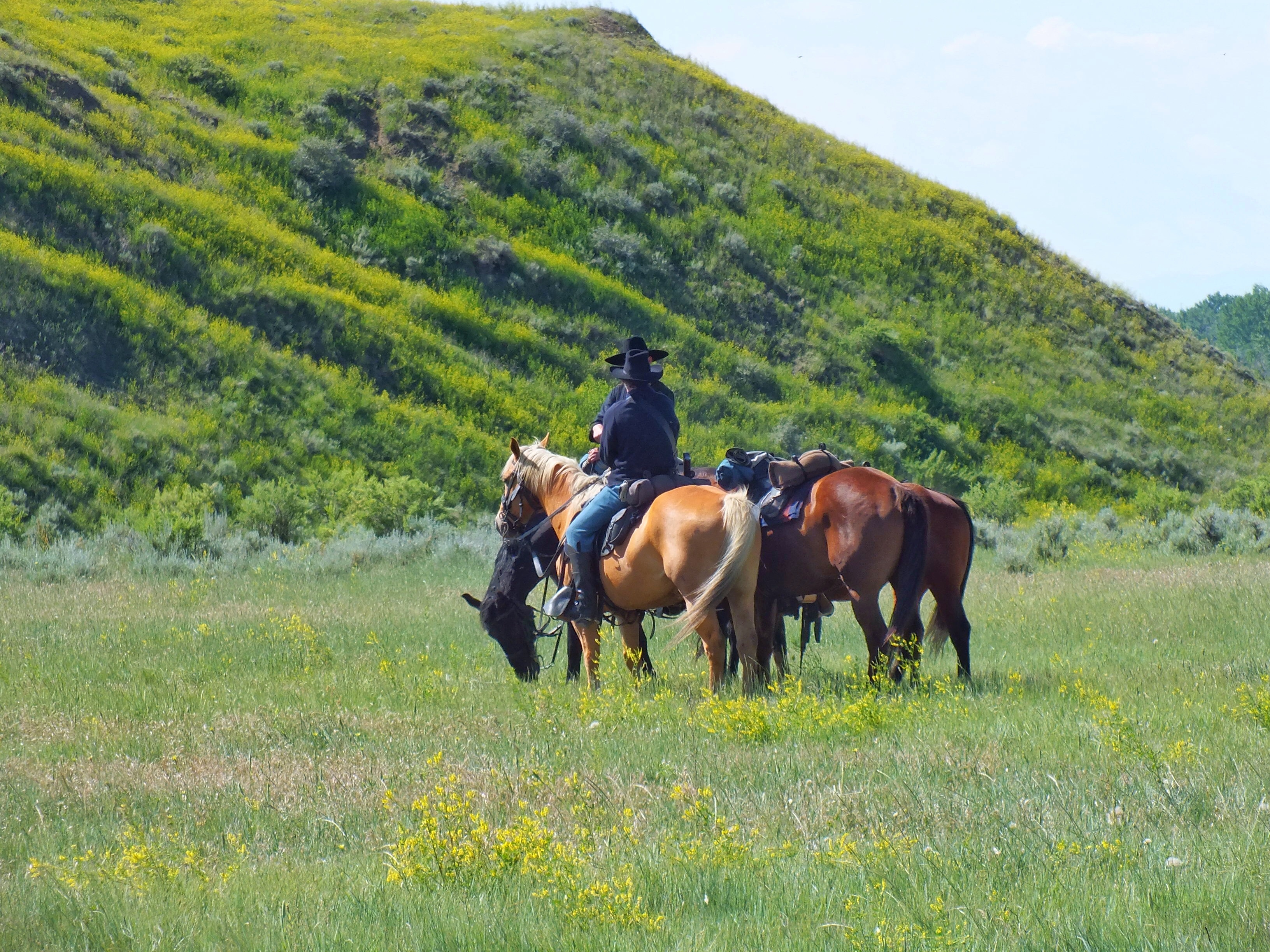 Looking west from Sharpshooter Ridge. Notice the fort-like building with the red roof. It shows up in several photos. It was from a point a little beyond that building that Reno made his first attack on the village. 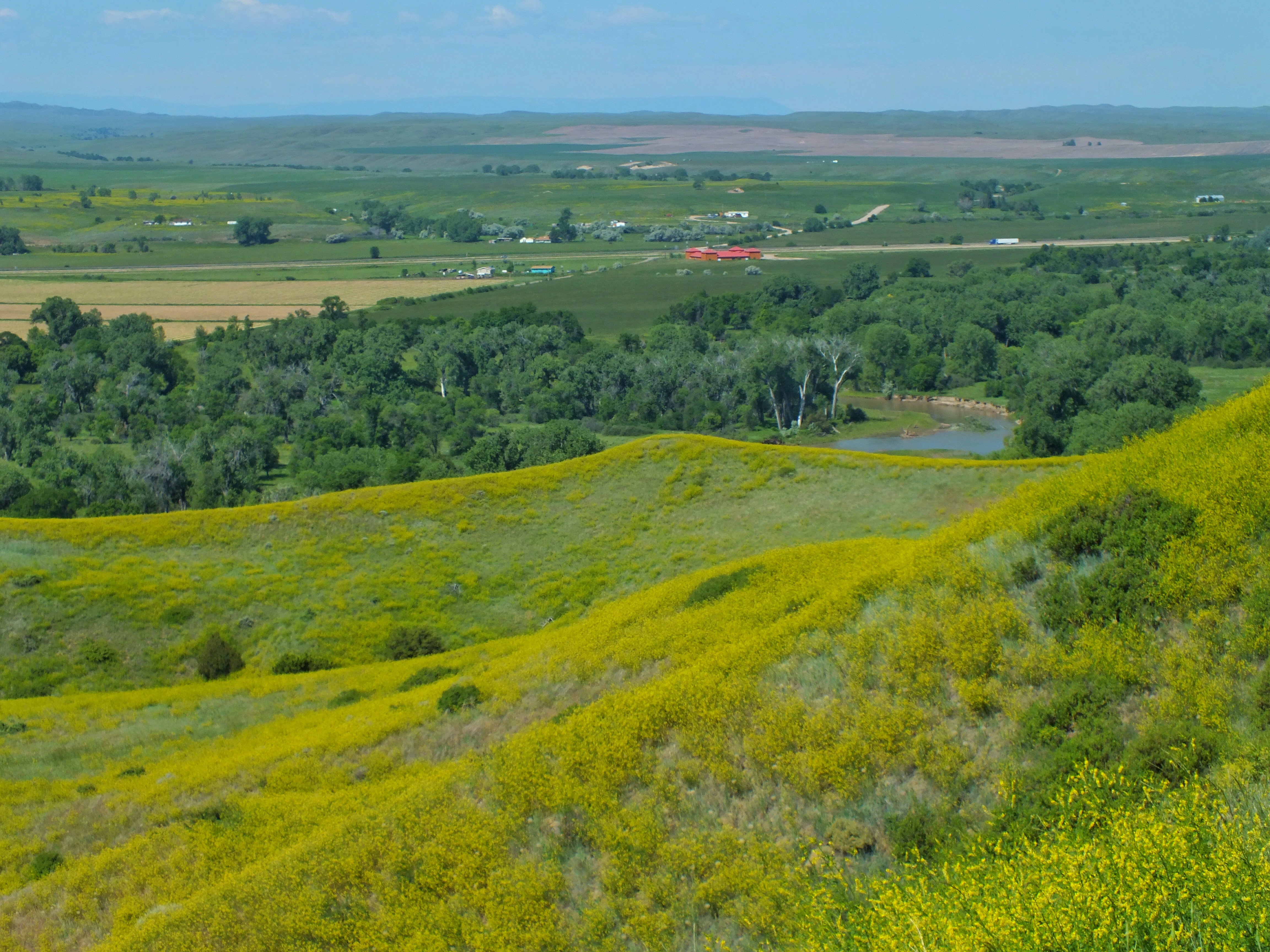 There was a trail at the Reno-Benteen battle site. I got out and walked the whole thing. At the top of the bluff overlooking where Reno and his men retreated across the river, a volunteer was standing by to answer questions. I was the only one there, so I chatted with him for a few minutes. He pointed to the places across the river where the battle began and where the Indian village was located. By the time I left that end of the park, all the spots in the small lot were taken. The next several photos were taken from the Reno-Benteen battle hill. 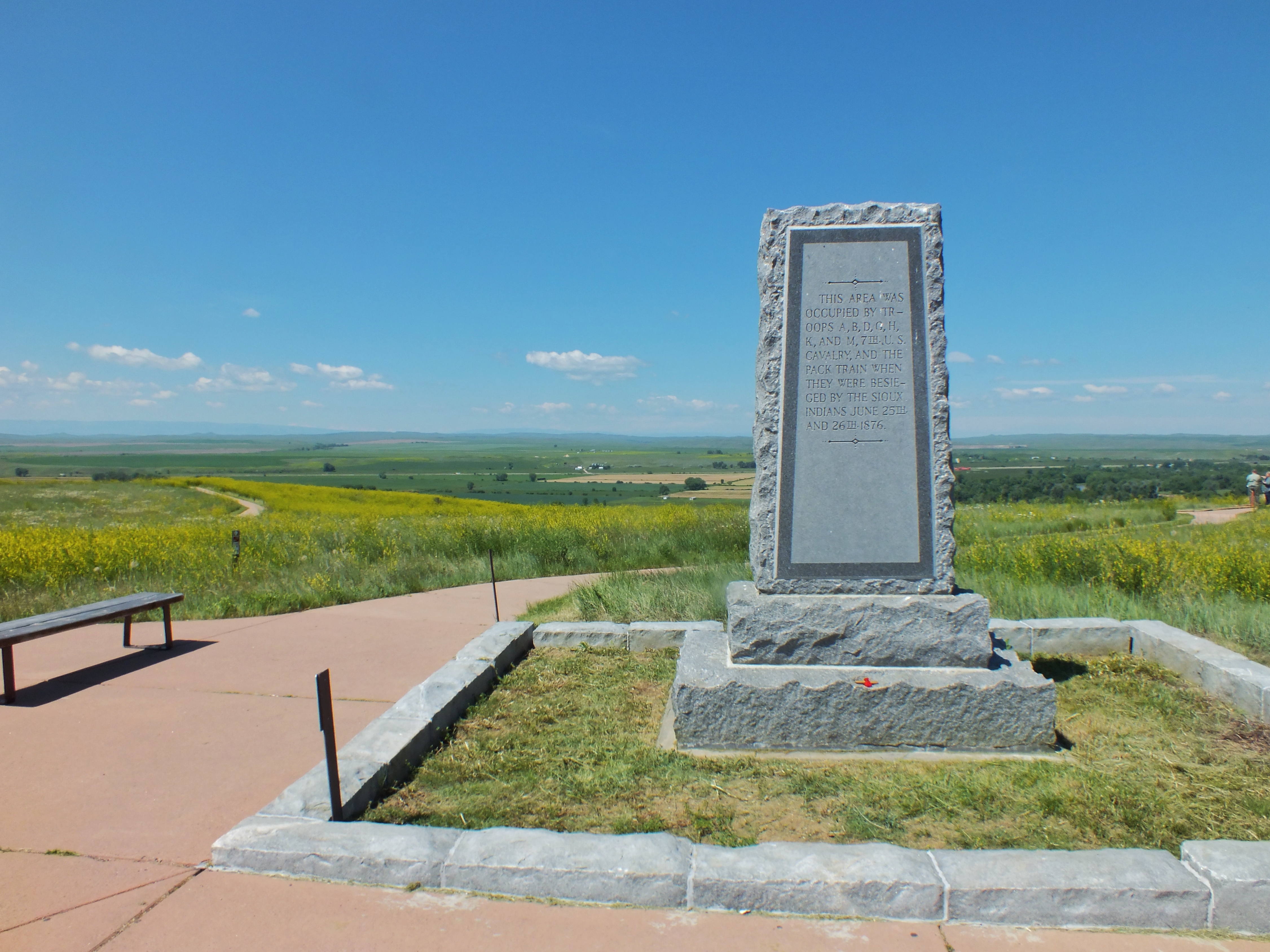 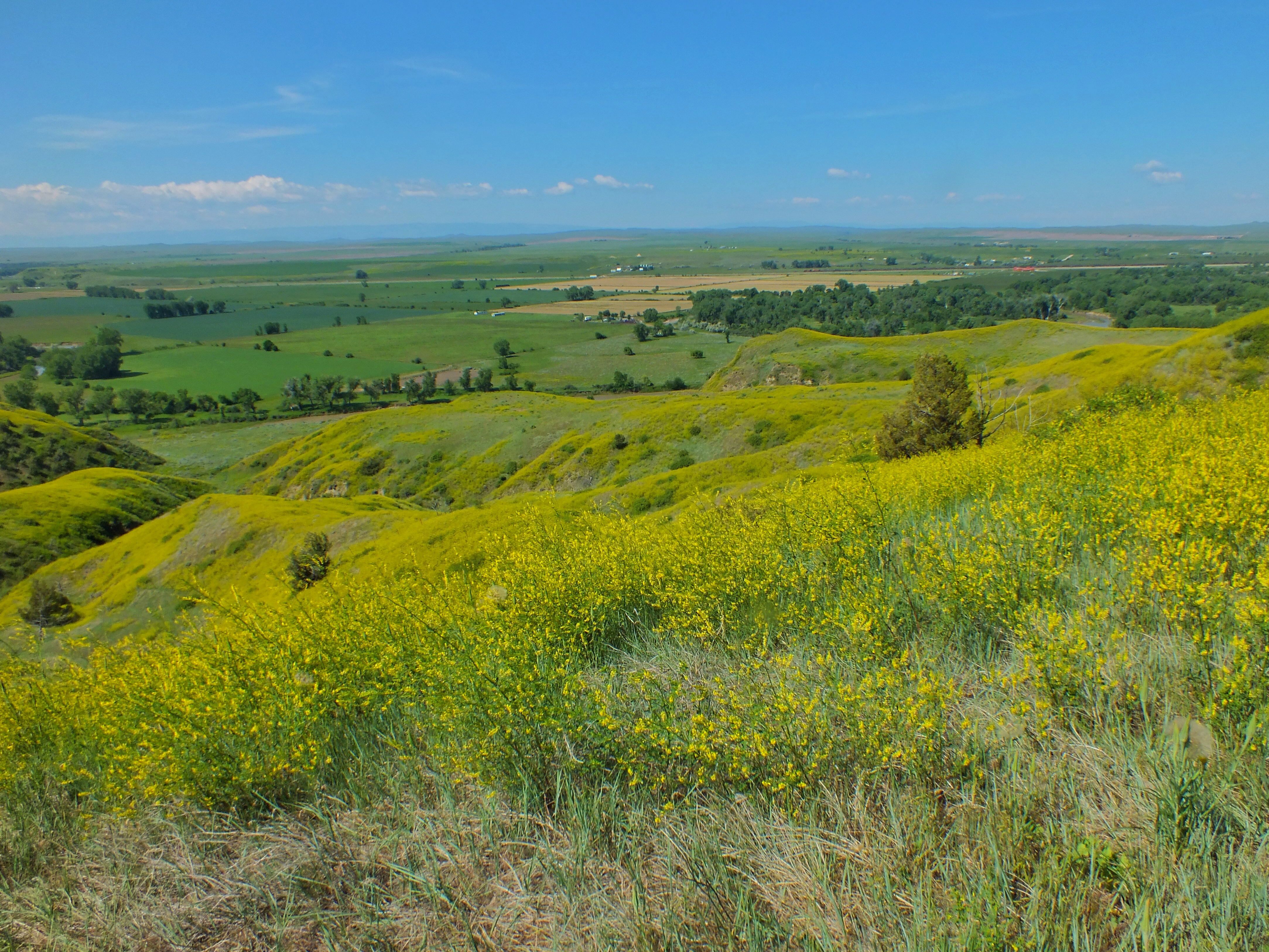 The flat area on this side of the river is where Reno and his men crossed during their retreat up the hill. If you enlarge the photo, you can make out a gas station right along I-90 (just to the left of the log buildings with green roofs). That is approximately where the southern edge of the two-mile long Indian village was located. Reno took up his second position in the trees between my location and the red-roofed building. 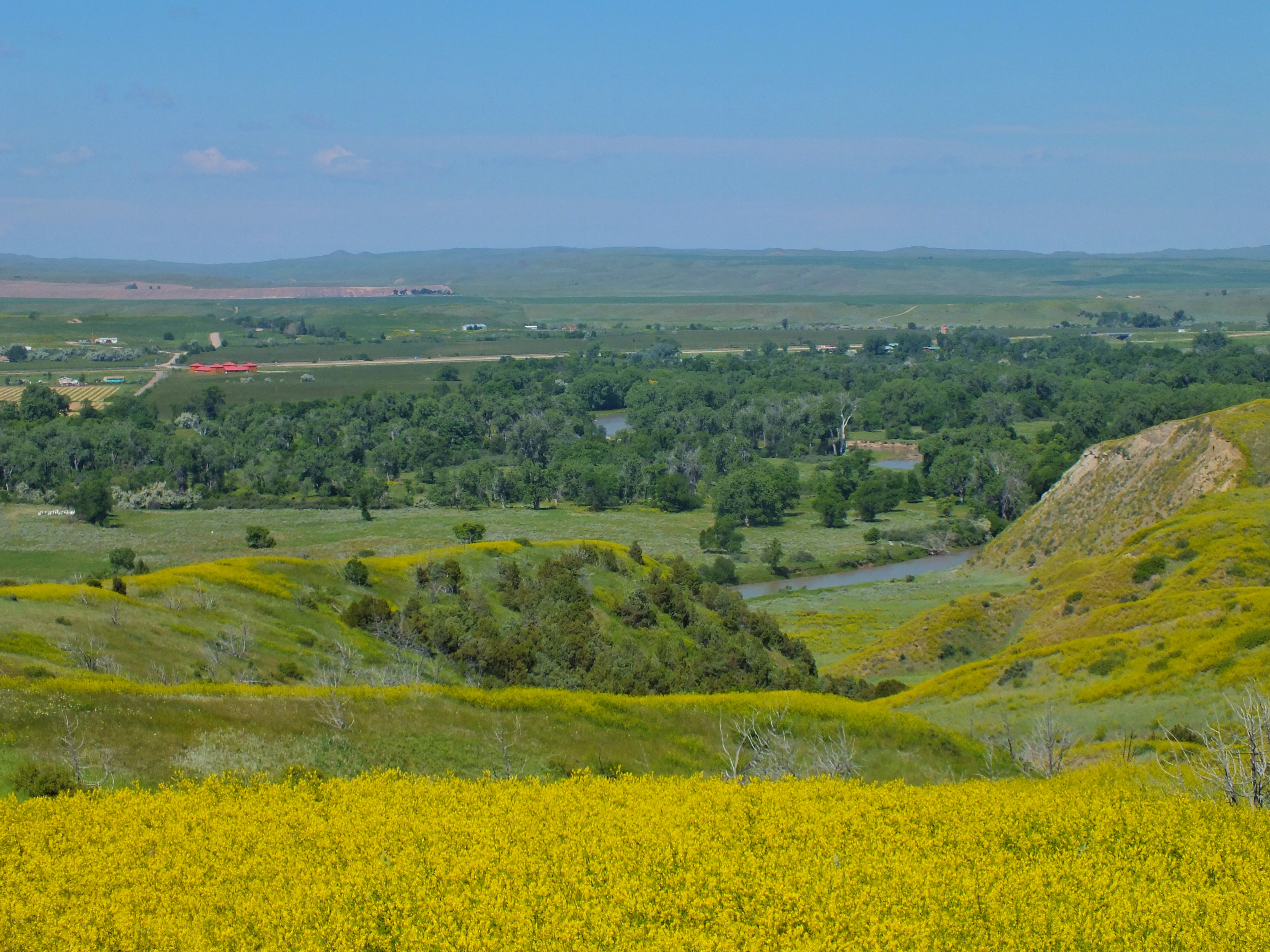 During the two days of battle on the hill, some of Reno’s men crept down this ravine to the river to get water for the troops while sharpshooters covered them. 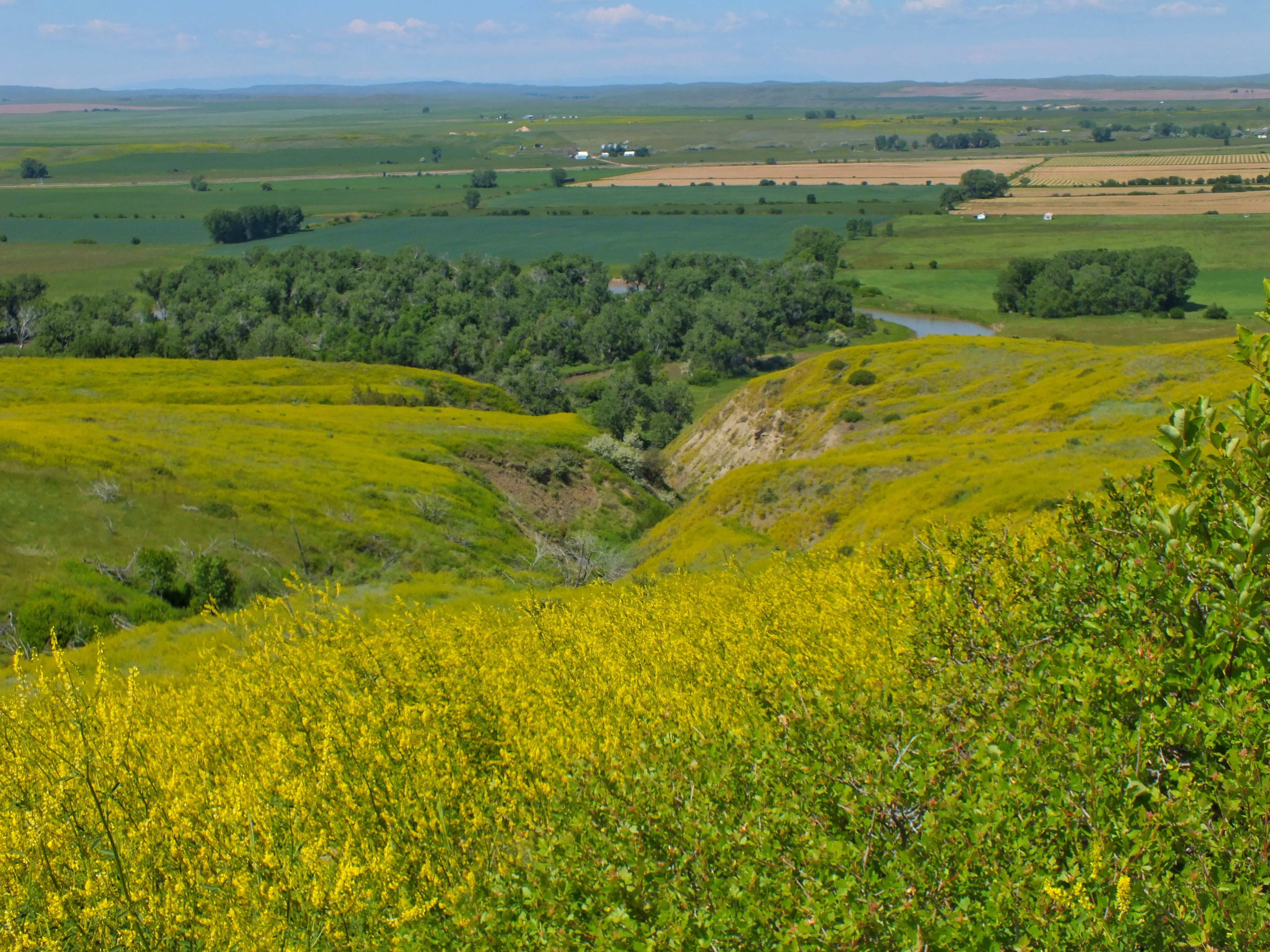 The southernmost point of Reno’s Hill looking toward the Wolf Mountains in the distance. 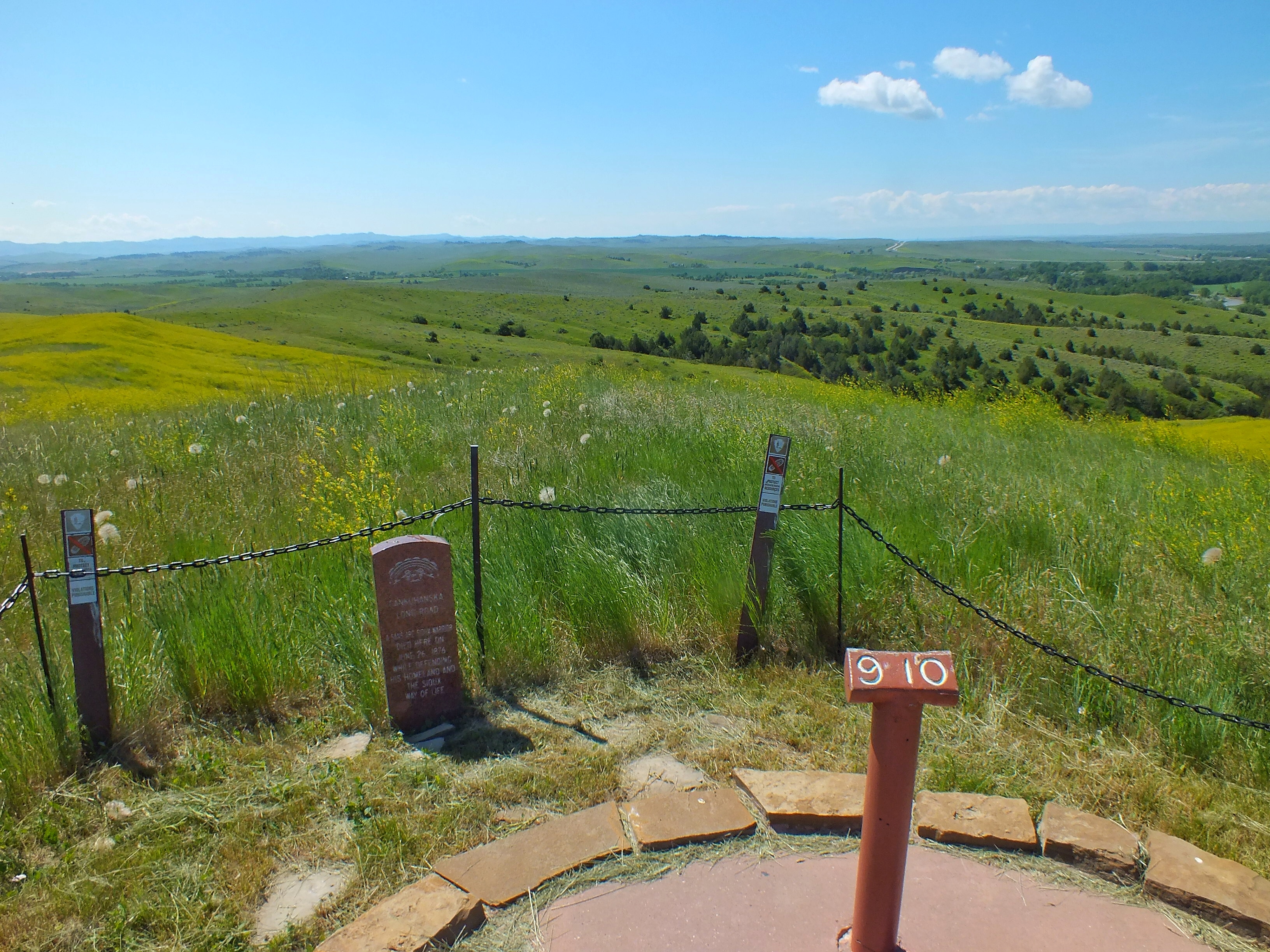 Looking southeast toward the Wolf Mountains. The depression in the grass just beyond the bricks is a reconstructed trench on the spot of a trench dug by Reno’s men. 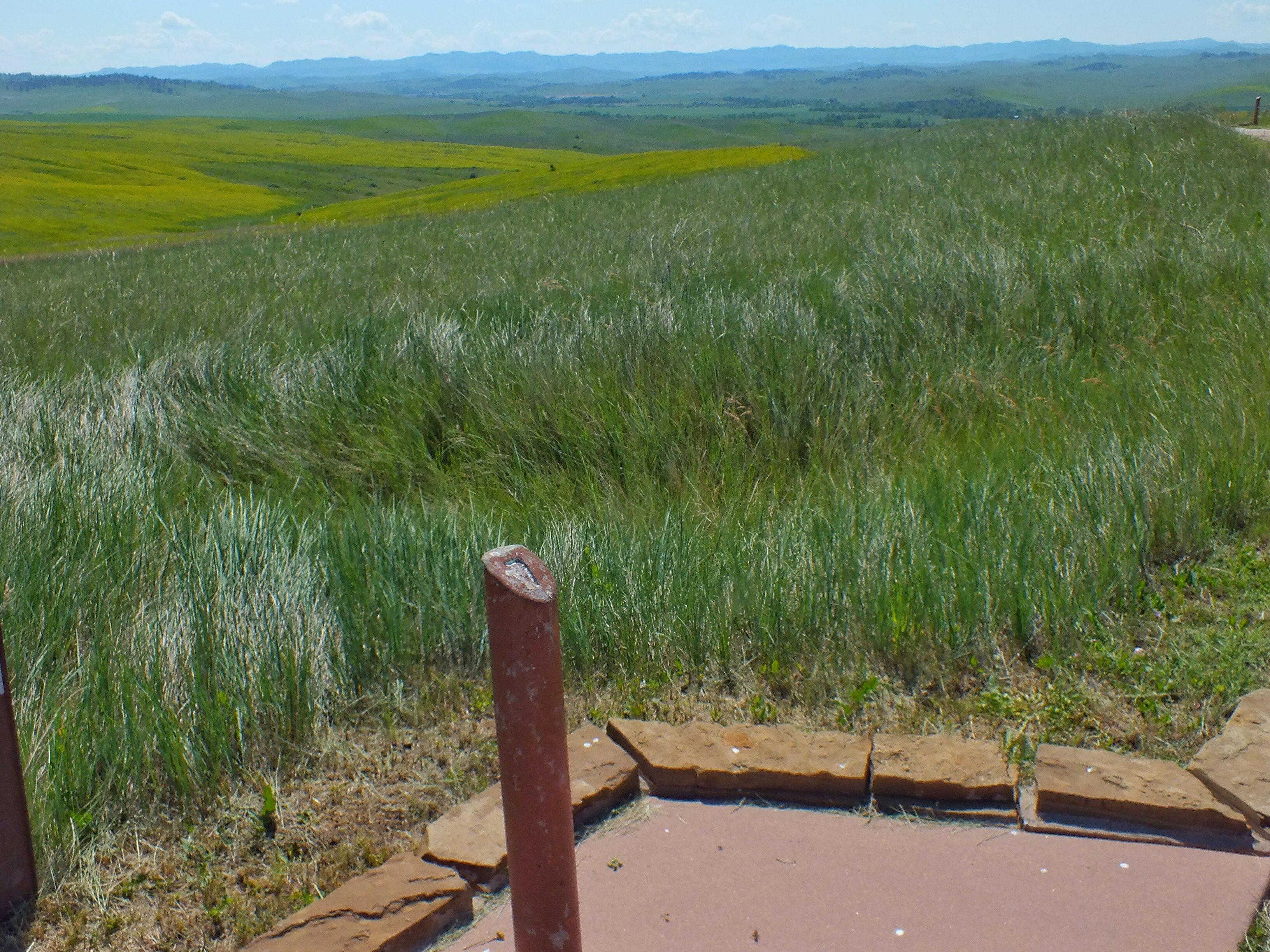 This panorama distorts the view, but it shows all of Reno’s hill from the southern rise on the left to the area just beyond the parking lot.

Cedar Coulee along which Custer advanced (toward the left) after locating the Indian village. 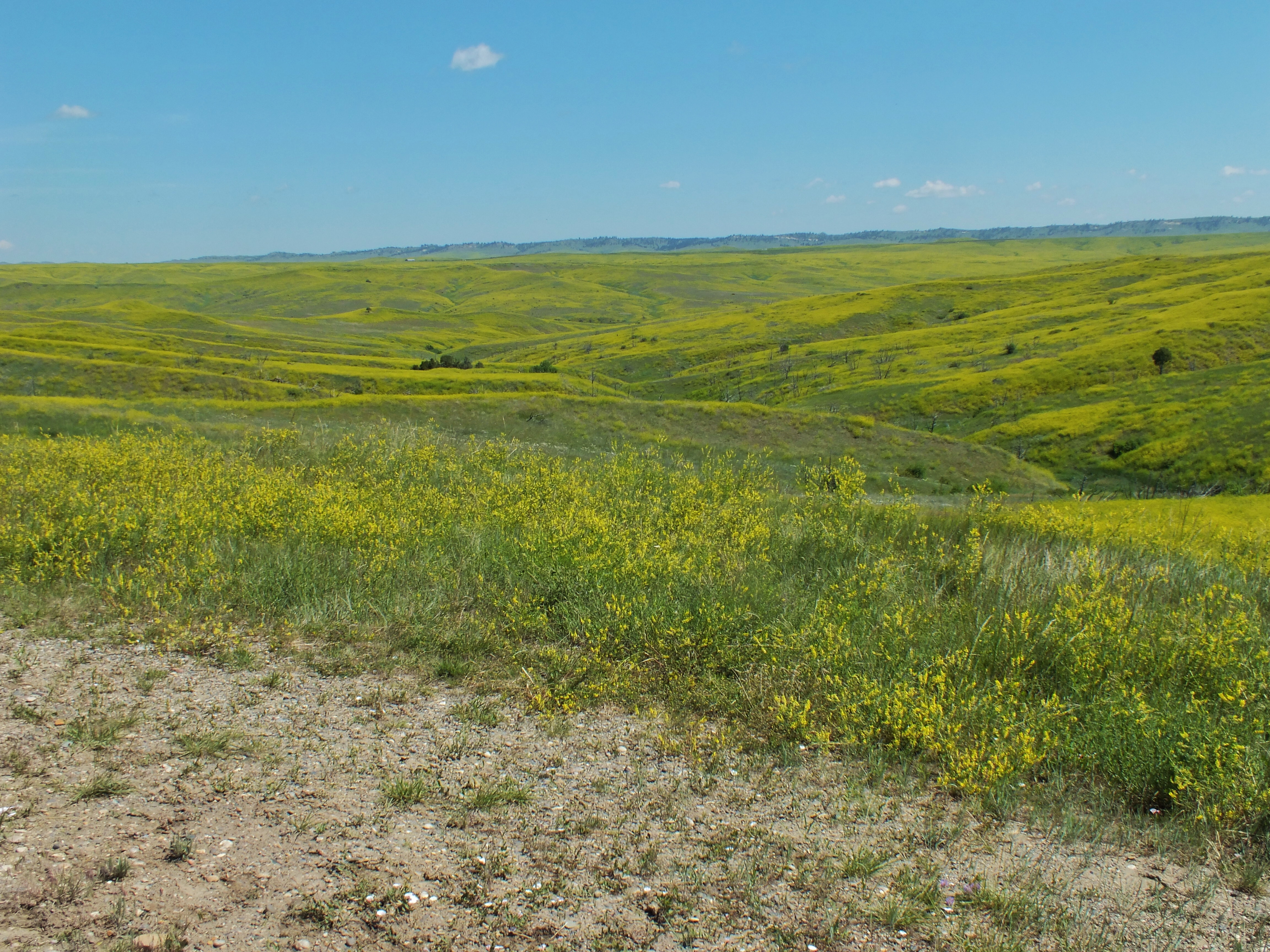 The view looking north from Weir Point. Enlarge it to see Last Stand Hill as a tiny dark spot to the right of the trees around the visitor center. 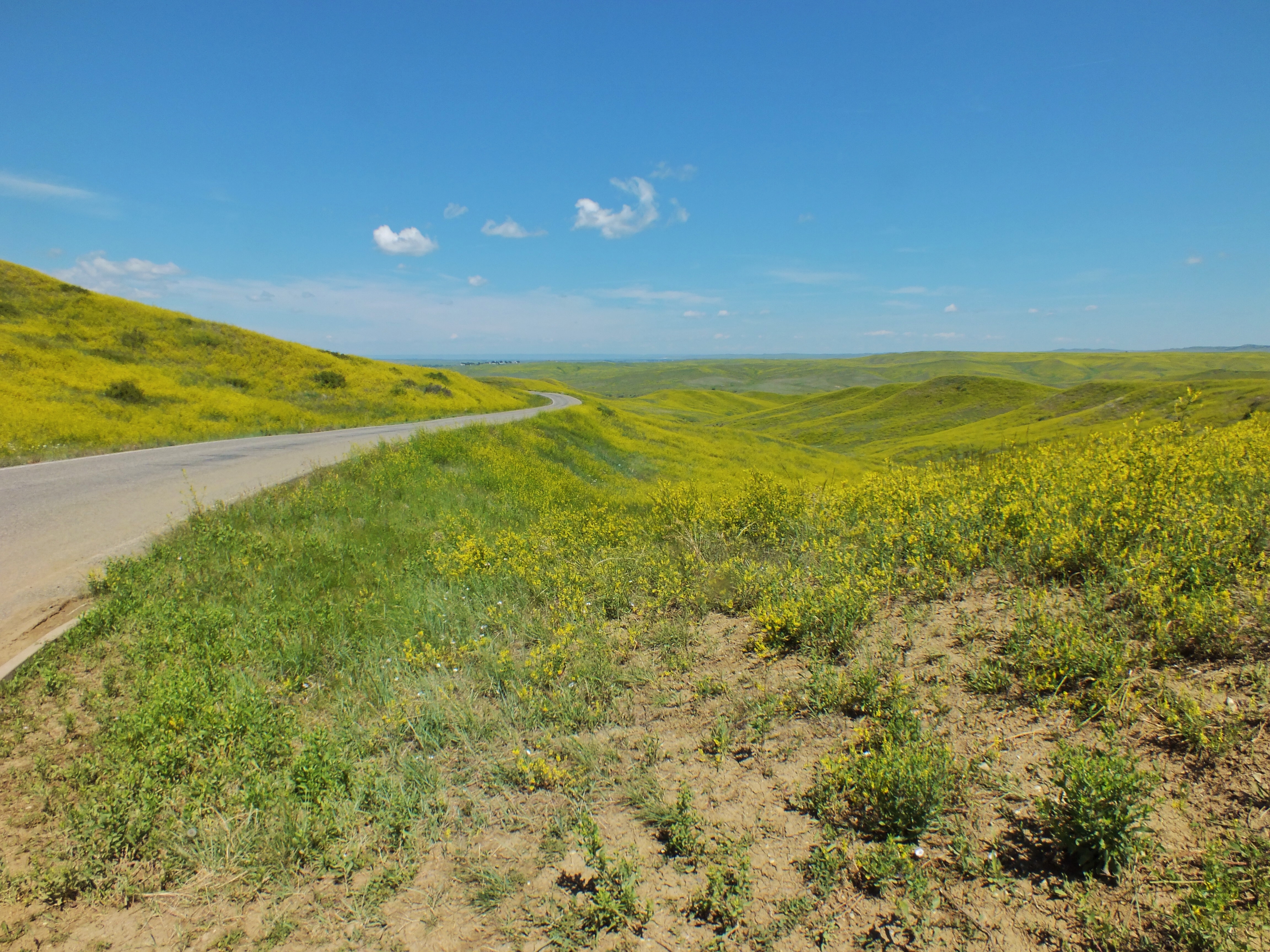 On my way back through the park, I stopped at all the pull offs on the other side of the road. At Medicine Tail Ford, I could see across the river out of the park. Two tepees were set up in front of a couple sections of bleachers. People were filing onto the seats to watch another reenactment. 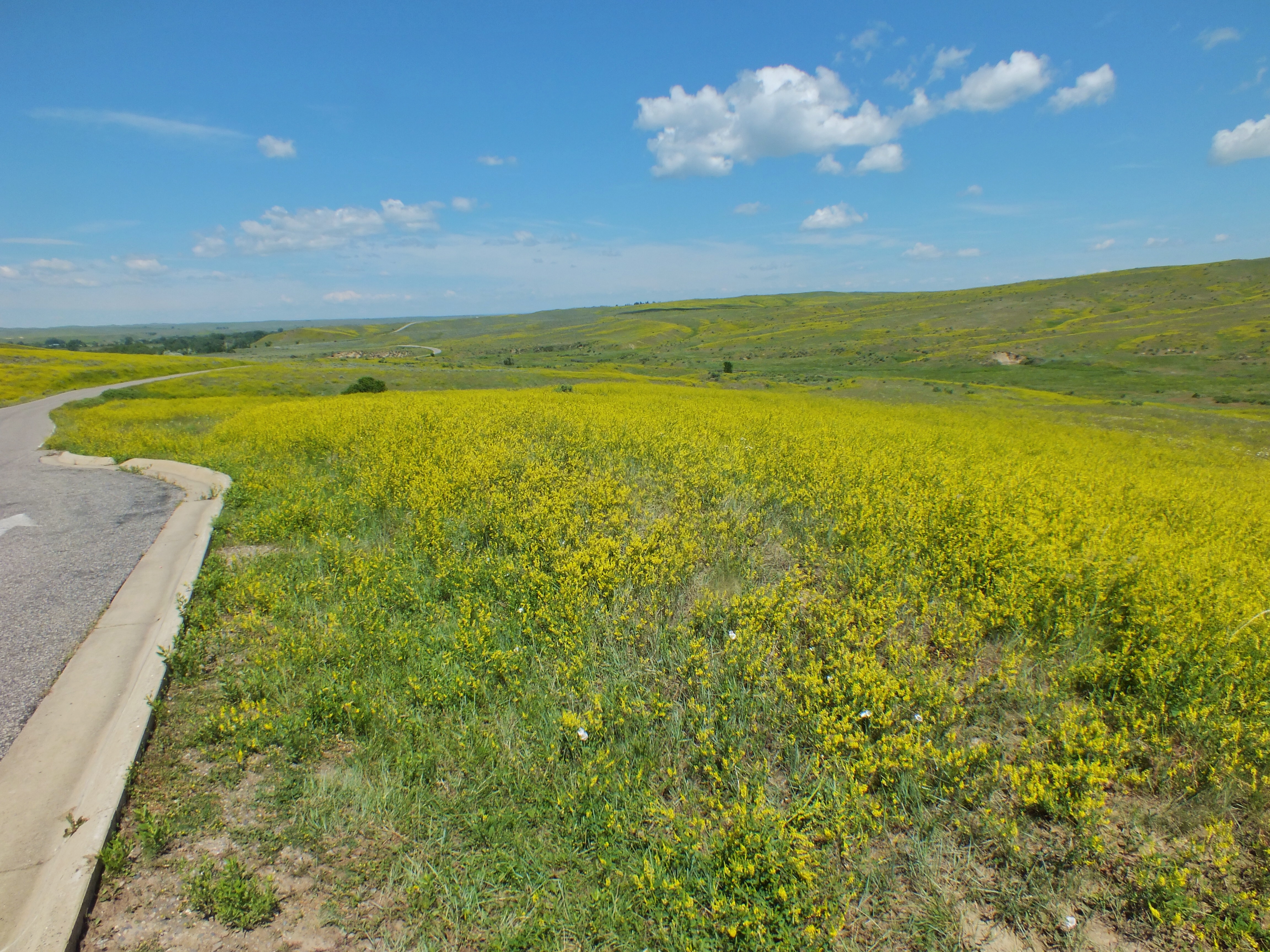 Last Stand Hill is on the left. On this portion of the battlefield, Myle Keogh and his men were overrun as they tried to join Custer.

When I got back to the visitor center, the main parking lot was jammed and people were sitting in their cars waiting for spots to open up.

I stopped in Crow Agency for something to drink and decided to buy a gas station hot dog for lunch. A pleasant guy who was also getting a couple dogs advised me to take advantage of all the available packaging because “you will place it on your car seat and take a corner too fast and there goes your hot dog onto the floor.” I told him he spoke with the voice of experience and thanked him for his wisdom.