We went to the second home game of the 2019 Air Force Falcons season. It was on a Friday night at 6:00. I expected a lot of traffic and hassle, but there was none. We were waved onto the Academy grounds without stopping and were parked in the south lot shortly thereafter. Our seats were on the visiting (east) side of the stadium, near midfield but high up on the bleachers. 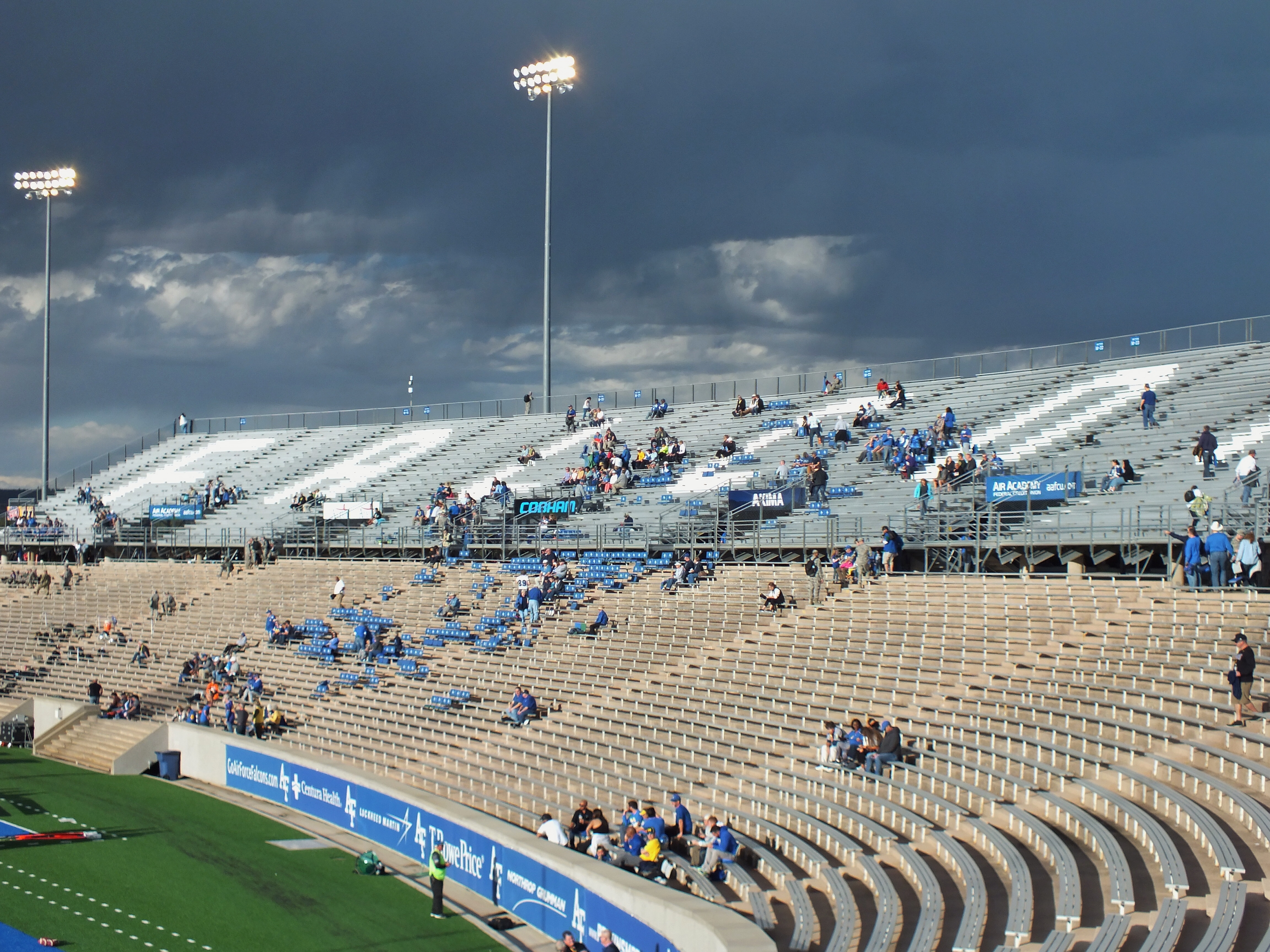 This was our view.

It was warm and sunny when we arrived. I wandered down to buy a mediocre supper from a food tent. I wasn’t back up on my seats long when the festivities began. Four jets flew over. 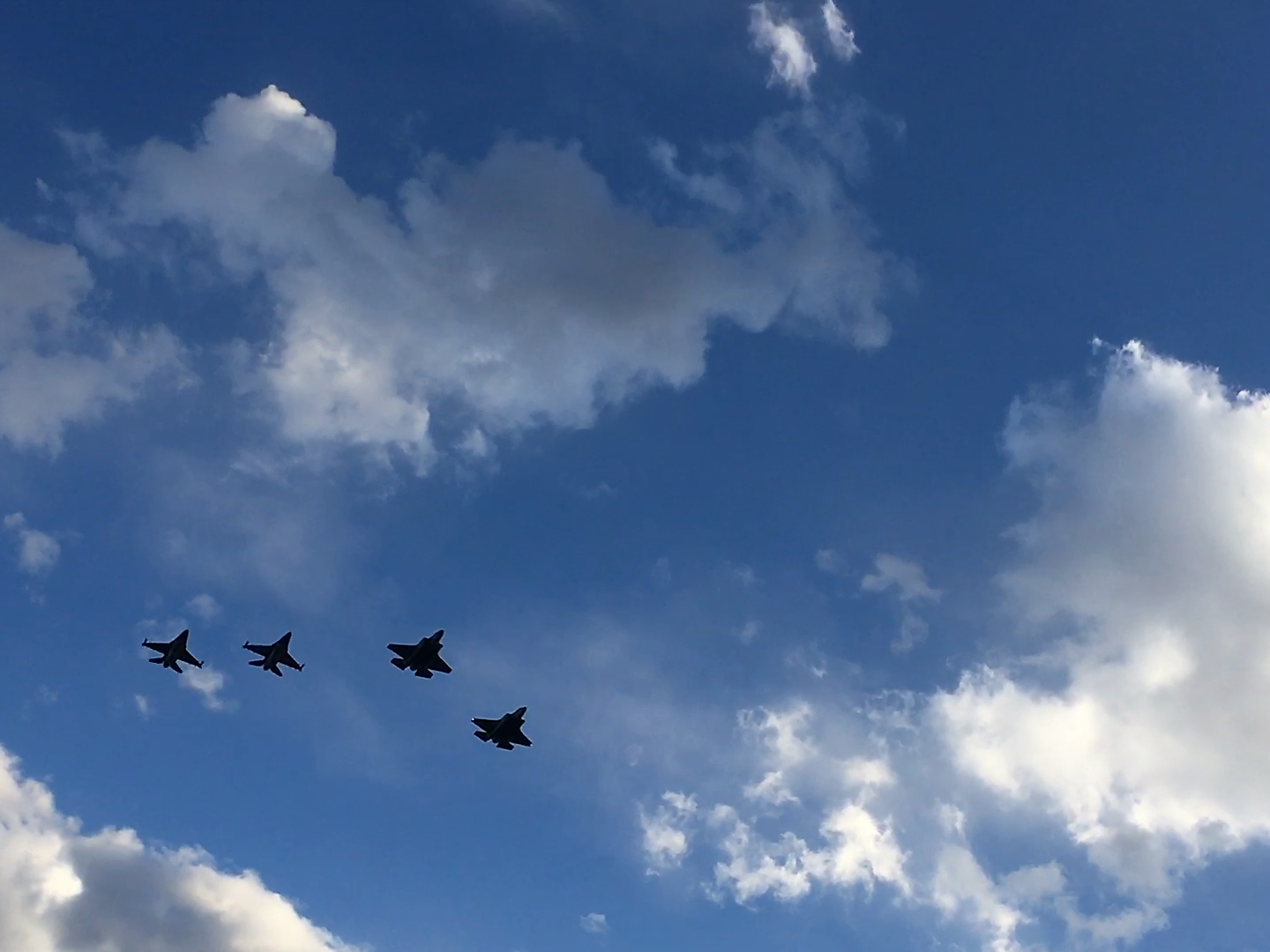 Six hang gliders parachuted down into the stadium. All the cadets marched out in formation. A guy dressed as a bird (and apparently called “The Bird” ran around frantically. There were two cheer squads and a pom squad and a couple of cows from Chick-fil-A. What there wasn’t was a large crowd. At its peak, I don’t think the stadium was one-third filled. 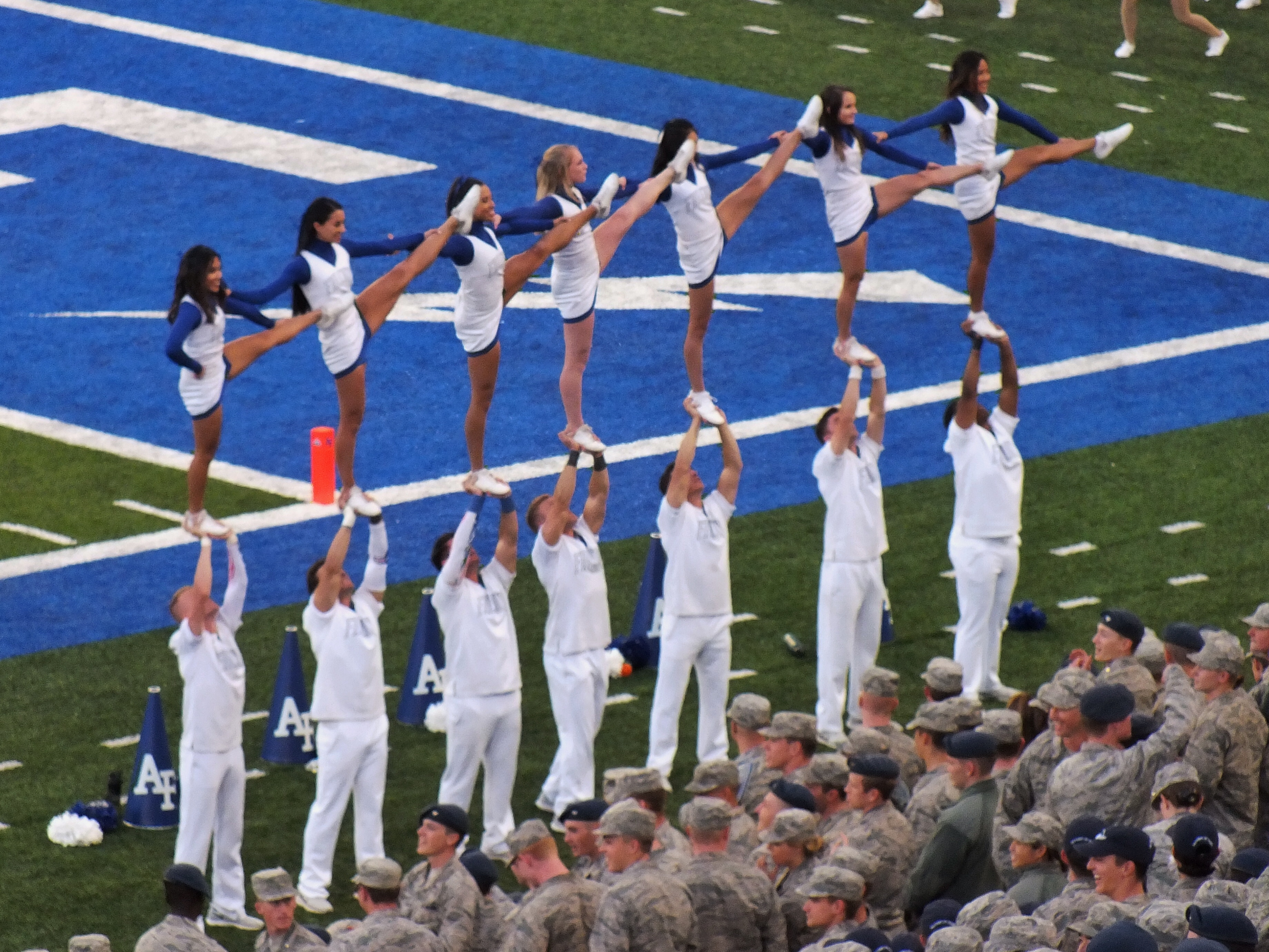 A weatherman appeared on the scoreboard to tell us that it might rain a few drops before the game started but then it looked good the rest of the night. He was wrong. 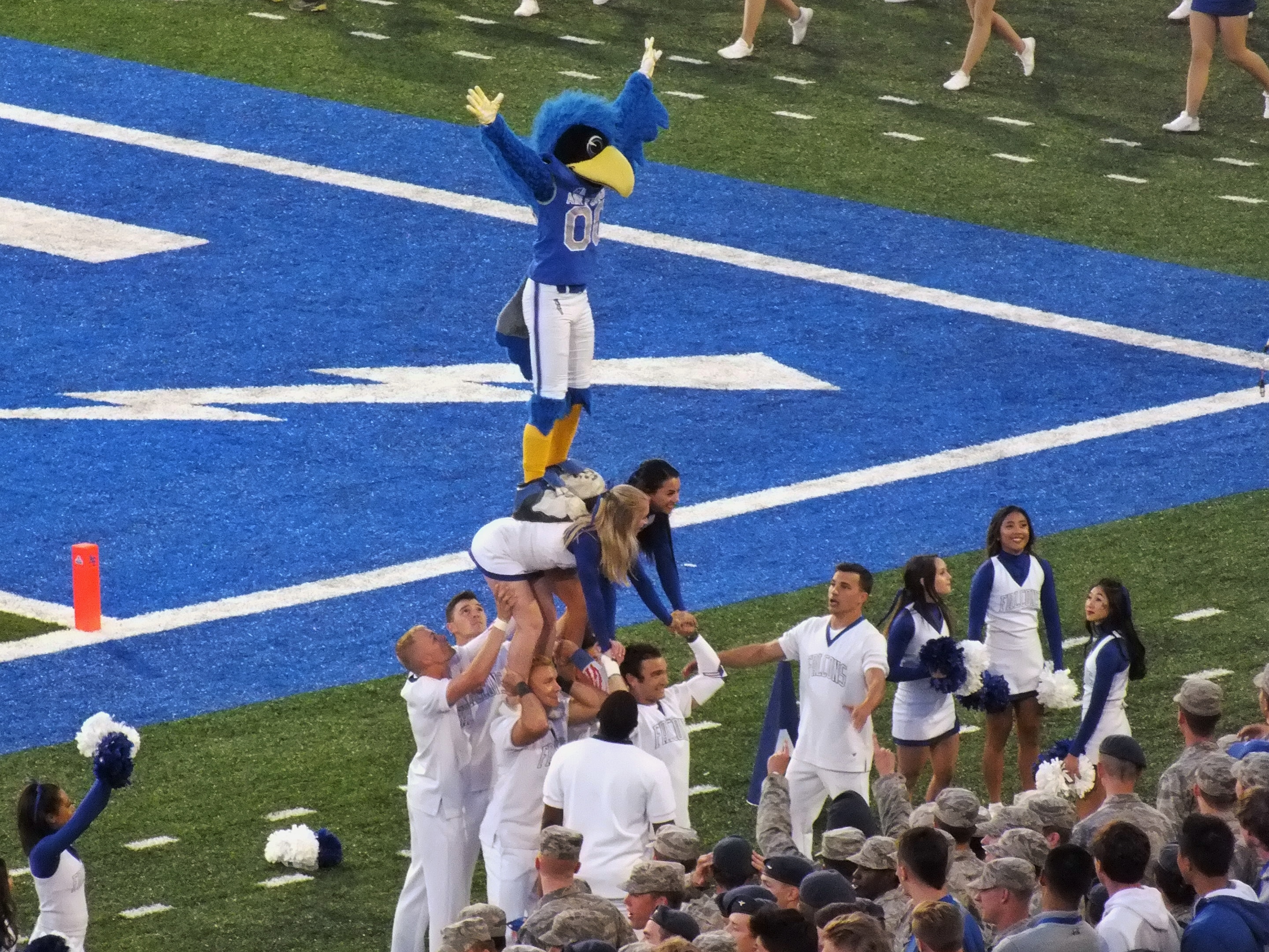 The Spartans scored on their first drive but then pretty much checked out. Air Force didn’t throw the ball often, but they didn’t have to. I can’t remember a single punt, although there may have been one or two. Air Force did complete one long fly pattern for a touchdown, but of course I didn’t catch it on video. The Falcons won 41-25, and the game was only that close because of charity. The Falcons quit playing defense in the fourth quarter. Seriously. At one point they tried for a 4th and 3 on their own 20 yard line when they could have punted with a stiff wind at their backs.

Whenever Air Force made a first down, the announcer would say, “That’s enough for an Air Force …” and then he would stop. An old guy two rows in front of us yelled “First down,” and I figured out that the entire crowd was expected to join in. For the next several first downs, it was just the old guy and me, but I nagged my wife until she began joining in too. Still, the three of us didn’t make much of an impact.

Whenever Air Force scored, a bunch of cadets ran onto the field and did a push-up for each point. This accumulated, so that when the last points were scored, they had to do 41 push-ups. Many Air Force personnel in the stands were also doing push-up, as you can see in the photo below. Four guys also ran out and did a loop of the north end zone carrying huge banners. 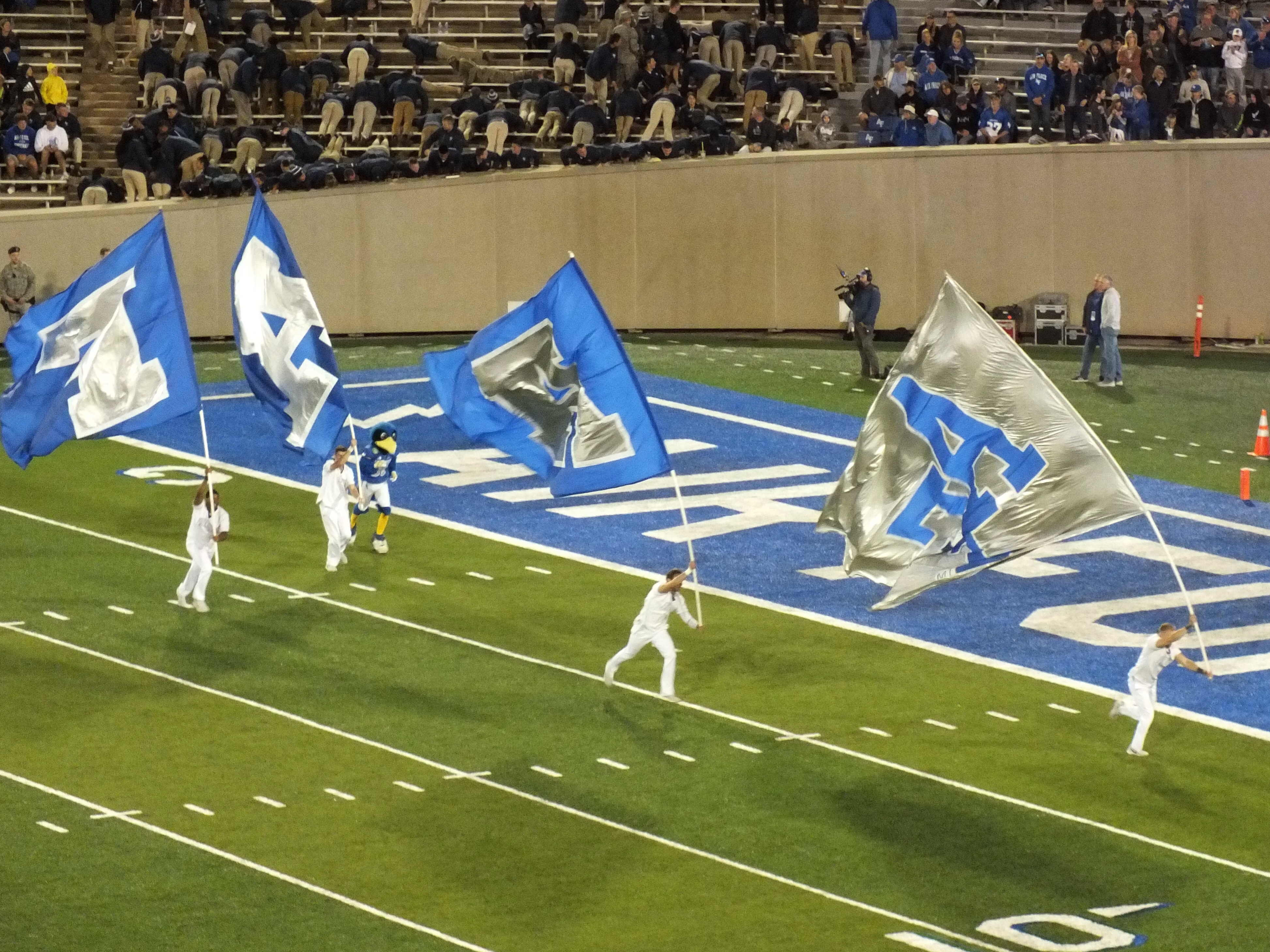 As soon as the sun went down, a cool north breeze came whipping down the front range and through the stadium. We were soon freezing, even though we’d had the foresight to bring jackets. During halftime, it began raining. We’d gone down by the food trucks and never returned to our seats. Most of the crowd left. We sheltered in the lee of a tent for the worst of it, then sat in the north end zone, somewhat out of the wind. This was our view from there.

Air Force was driving for the far end zone in the fourth quarter, so we walked down to the other end. We didn’t even bother finding seats. You can see how empty the stands were by then. We huddled behind a section of the bleachers out of most of the wind. My weather app said it was 60°, but it was far, far colder than any 60° I’ve ever felt.

We stuck it out to the very end because we figured we’d only do this once. But we enjoyed the hoopla and the game and the atmosphere and weren’t at all sorry we’d gone.

We got out of the stadium and the parking lot with zero wait at any point. Because we were in the south lot, we were forced to exit the academy through the South Gate, which meant a long drive lined with cones and traffic directors who were standing in the dark with no traffic to direct.

This entry was posted in Sports. Bookmark the permalink.