I pondered the idea of seeing a Broncos game the next time the Bears were in town. Tickets are still too expensive, but I have a bit more discretionary income these days. When I found out the Bears were visiting during week 2 of the 2019 season, I went for it.

I had nothing with me except my camera case. As I walked up the steps to the gate, a guy in a uniform told me my case was too large. I questioned his decision. He held up a 8½ x 5½ piece of paper and told me that my case was larger than that. He held it up to my case to prove his point and discovered that he was wrong. He waved me through.

I went through security and was given a towel to wave. I didn’t notice many of these being waved during the game, but I saw a lot of people wearing them on their heads as protection from the sun. It was hot. Game time temperature was 91°, with 41% humidity.

I walked an entire loop around the lower level of the stadium, buying a burnt cheeseburger and fries on the way. I also stopped in the very crowded Broncos merchandise store and stood in line for 20 minutes to buy a $6.75 pin. I then walked up the ramp to the very top level. I came out as far from my seat as I could possible get, so had to make another loop around the upper level, which was packed.

I’d purchased a souvenir cup with lunch that came with free refills. Before I found my seat, I took it to another stand. The guy explained that health code restrictions prevented him from taking my cup into the stand. I had to place it on the counter in front of the registers while He filled another cup and then poured it into mine. I was getting lemonade. The guy said it looked like water and asked me to check it. I told him it was cold and wet, so it was fine.

My seat was on the west side of the stadium, exactly in line with the south end zone. I was maybe six rows from the very top of the stands. I don’t know what percentage of the crowd was Bears fans, but there were a lot. Most of the people in my immediate area had Bears gear on. I was in the middle of a row between a large older guy and a younger beer drinking guy. I didn’t speak to either of them, but had no issues. In fact, the beer drinking guy left at halftime and never returned. There was one Bears fan a couple rows behind me who shouted some obscenities at the beginning of the game, but otherwise everyone seemed pretty good-natured. 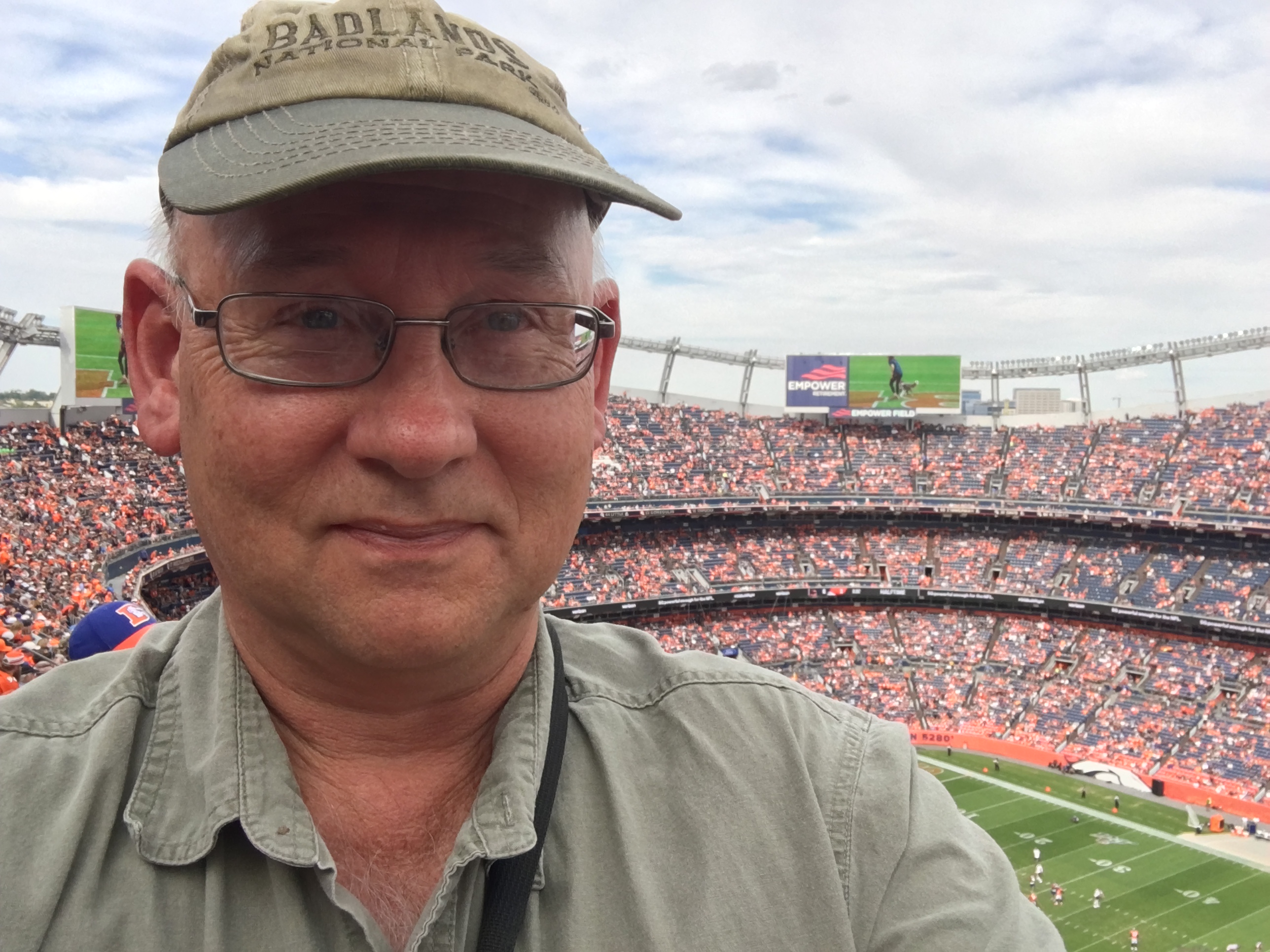 The sun was beating on my head for the first hour but then went beneath the stadium behind me. It was still warm, but there was a breeze so it was quite bearable. The pre-game festivities included the Broncos cheerleaders, sky-divers, a horse, an Air Force flyover, and a huge American Flag.

The game itself wasn’t overly exciting. It was 6-3 Bears at halftime. The entertainment was frisbee-catching dogs. I stood up for a couple minutes, but I never left my seat until the game was over.

Two fan things during the game that were pretty cool:

Whenever the Broncos scored, huge bursts of flame shot out from the top of the scoreboard. It was quite a ways off to my right, but I could feel the heat. The flames were followed by fireworks as the Broncos horse ran across the field.

The Bears finally got the ball down to the Broncos five-yard line in the third quarter. They made three attempts to get into the end zone and failed all three times. But the Broncos kindly committed a penalty that gave the Bears a first down and three more tries. Finally on the sixth attempt, Bears running back David Montgomery managed to just barely push the tip of the ball over the line for a TD.

The way both teams were playing, it looked like the Bears had it. But the Broncos had three long drives in the fourth quarter. They scored a field goal on the first. On the second, Kyle Fuller intercepted the ball on the goal line. On the third, the Broncos scored a touchdown to make it 13-12 Bears. The Broncos were setting up for a two-point try when they committed a penalty that moved them back. They tried for an extra point to tie the game. The kicker missed it, but the Bears were offside, which moved the Broncos up to the goal line again. They changed their minds again and went for a two-point conversion. They made it. It was now 14-13 Broncos with 31 seconds left.

The Bears completed an early pass. A dubious roughing-the-passer call on the Broncos moved the ball another 15 yards. Several pathetic incompletions later, it was 4th and 15 with 9 seconds remaining on the clock. The Bears had to get at least 20 yards to be in field goal range, and had to complete the play in time to call their last time out. Trubisky scrambled and completed a pass to Allen Robinson and called time out. The clock said the game was over, and the Broncos were pouring onto the field. The fans in the stands were going crazy. But the refs determined there was 1 second left.

As time expired, Eddy Peiniro kicked a 53-yard field goal into the wind to give the Bears a 16-14 victory. As I took the long walk back to my car, Bears fans were screaming and giving each other high fives. I didn’t have any Bears gear on, so I was ignored, but it was fun to see.

It is very unlikely that I’d ever spend that much money to go to another NFL game, but the huge stadium, the large and enthusiastic crowd, the spectacle, and the outcome made it a lot of fun.

This entry was posted in Roadside Attractions. Bookmark the permalink.