This was a strange morning. I didn’t have to be anywhere for the convention until noon, and my coworkers didn’t want to use the car so, of course, I went birding. I drove south to Imperial Beach and parked in front of the southernmost house on the California Coast. The refuge consisted of a flat field covered with sand and low scrub and bisected by muddy channels filled with muddy, smelly water. The Pacific Ocean beach was separated from this field by a long ridge of rocks about four feet high put there, I presume, to protect the marsh. A fence ran along the top of this ridge with frequent signs warning that the area beyond was off limits to protect nesting Snowy Plovers and Least Terns. There was another sign saying that the water was highly contaminated and all contact with it should be avoided. I wasn’t surprised. The place reeked. The Tijuana River, which forms the marsh, empties out of Mexico, and the refuge itself is only a mile or two north of the border. 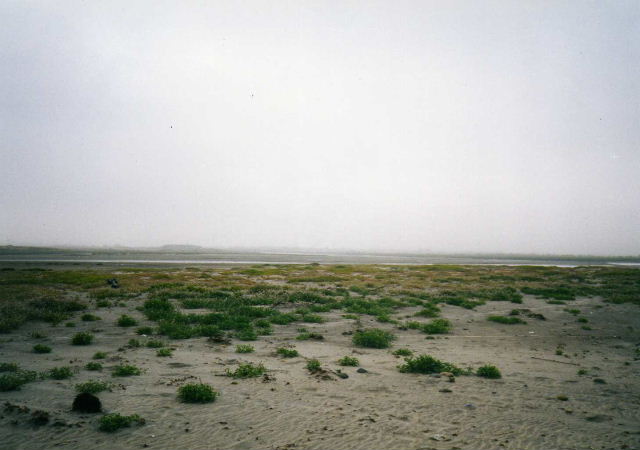 I walked over the ridge and began heading south along the beach. I had the entire beach to myself, which added to the strangeness. Being that close to the border, alone, surrounded by contaminated water in the fog along the Pacific Ocean was a bit out of my comfort zone. I wondered for a moment if I wanted to continue, but I scanned down the beach and saw several shorebirds. One of these birds turned out to be my first Whimbrel since 1980. There was also a Willet and a flock of Sanderlings. After a half mile or so, the ridge got lower, and I stepped up on it to look in the field beyond — avoiding the rotting seal carcass on the beach. Least Terns were everywhere, flitting and screaming over the beach and field. 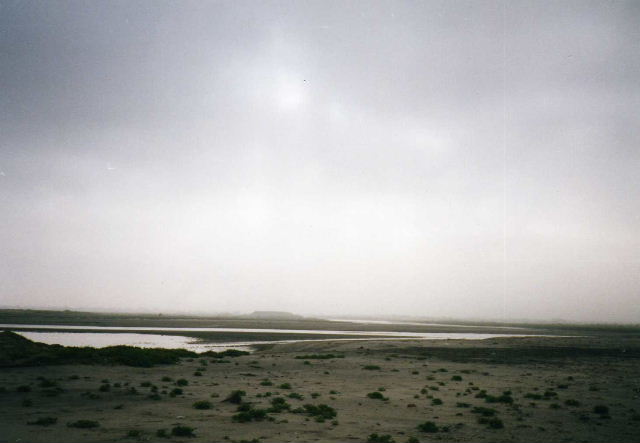 About 100 yards from the mouth of the river, the area beyond the fence was more sandy with gaps between the clumps of brush. I scanned the ground carefully and soon saw a Snowy Plover standing next to a clump. It didn’t move for a minute or so, then walked off out of view. I started back down the beach and soon saw two more on my side of the fence. They were high up on the beach where the sand was dry, maybe 30 yards from the ocean. They ran along in typical stop-and-go plover fashion, making quick picks at the sand and keeping about 15 yards ahead of me. They were very small.