Chalk this one up to eBird and a friendly birder—and some stubborn persistence on my part. An Eastern Screech-Owl has been hanging out in the same hole in the same tree for each of the past two winters. The tree is in a small park in the Denver suburb of Littleton. When I saw on eBird that people were seeing it again this fall, I decided it was time for me to go.

I drove up on Saturday, October 26 and arrived around 8:00 am. I had seen photos of the owl in its tree, so I knew I was looking for a hole with a sawed-off branch stub on the right. I also knew the hole wasn’t terribly high because of the angle of the photos. But I had no idea where in the park the tree was. I began wandering around, checking each tree carefully. I’d made it about halfway through the park when I saw an older gentleman with a pair of binoculars (and a small dog). I asked him if he knew where the owl hung out. He did, but before he would show me, he asked me if I was going to annoy the owl. He said he’d seen people walk right up next to the tree with their cell phones. I told him I’d be good.

We walked about 200 yards to the other side of the park. (At least I had the satisfaction of knowing I hadn’t looked in the right tree yet.). We walked quietly through a cut in some bushes and came upon a clearing with two trees in the center. The one on the right had the hole I was looking for, but the owl wasn’t in view. I thanked the guy, and he took off (to say nothing of the dog).

I walked the loop trail around the park, which is maybe a mile, and checked the hole again. Still no owl. The Littleton Museum is in the park. In addition to some inside displays on local history, they have two restored working farms from the 1800’s, complete with animals. I wandered around there for an hour or so, then checked on the owl again. Still not there.

I drove about two miles away to an antique mall and wandered for a couple hours, then went back to look for the owl. Still not there. I made another loop of the park and then looked for the fifth time. Nope. I gave up for that day and headed home. I knew I’d see it eventually, as long as I was willing to continue making the drive to Littleton.

This morning I birded around Colorado Springs and drove to Littleton around noon. I headed straight to the park, but the owl wasn’t out. I walked the loop around the park and checked again. Still no owl. I drove to Duffyroll Cafe (where the cinnamon rolls and sandwiches are amazing) and had lunch, then drove another four miles north to check out Fifty-two 80’s, a store that specializes in 1980’s pop culture. I got back to Ketring Park a little after 2:00. As I walked toward the place where the owl hangs out, I saw an elderly couple head back into the clearing. They came back to the path less than a minute later, so I figured I’d struck out again.

I didn’t. There was the owl, pretty much taking up the entire hole. 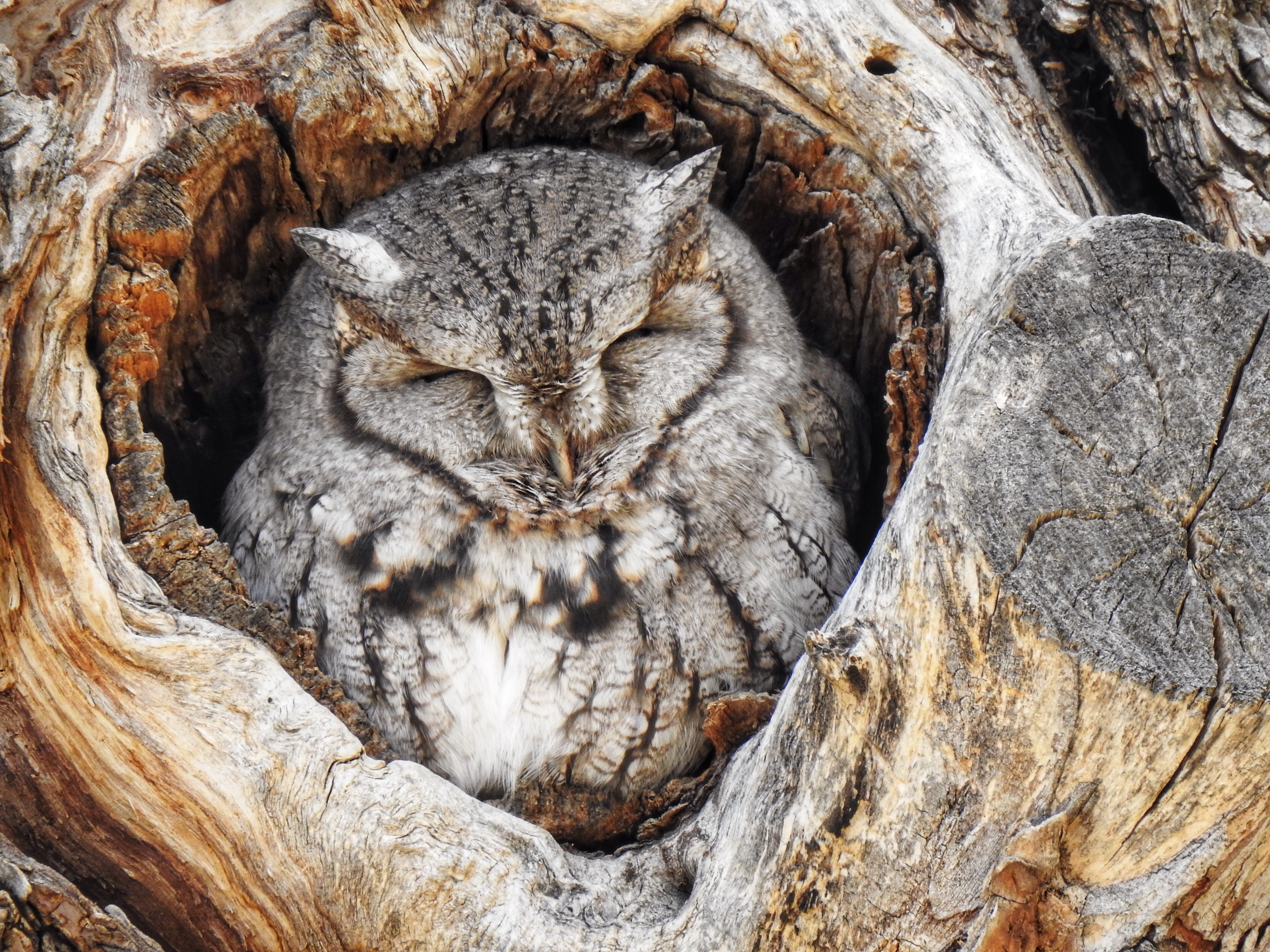 You can tell it’s an Eastern  Screech-Owl as opposed to a Western Screech-Owl because the base of its bill is light grayish-green. On a Western, it would be dark gray or black. Also, the horizontal streaks on its chest are more noticeable whereas on the Western, they’re very thin.

If you look at a map of Colorado, you’ll see that the state is divided nearly in half north to south by I-25. If you draw another dividing line straight east to west so that it intersects the city of Castle Rock, you’ll have four roughly equal quadrants. Eastern Screech-Owls are generally resident in the northeast quarter of the state. Western Screech-Owls are generally found in the other three.

It so happens that the Eastern Screech-Owl is the only regularly-occurring bird in Illinois that I had never seen. I was OK with that as long as I lived in Illinois because it meant that I could see a lifer anytime I went outside, even if it was just in my own backyard. But I never saw a hint of a screech-owl there. I had heard them in central Arkansas years ago, and may have even had one or two flash across the night darkness in front of my car, but nothing I could count. But once I moved to Colorado, I decided it was time to add the species to my list.

I had my new camera with me for the first time and so I was able to get these amazing photos while never getting closer than this to the tree. 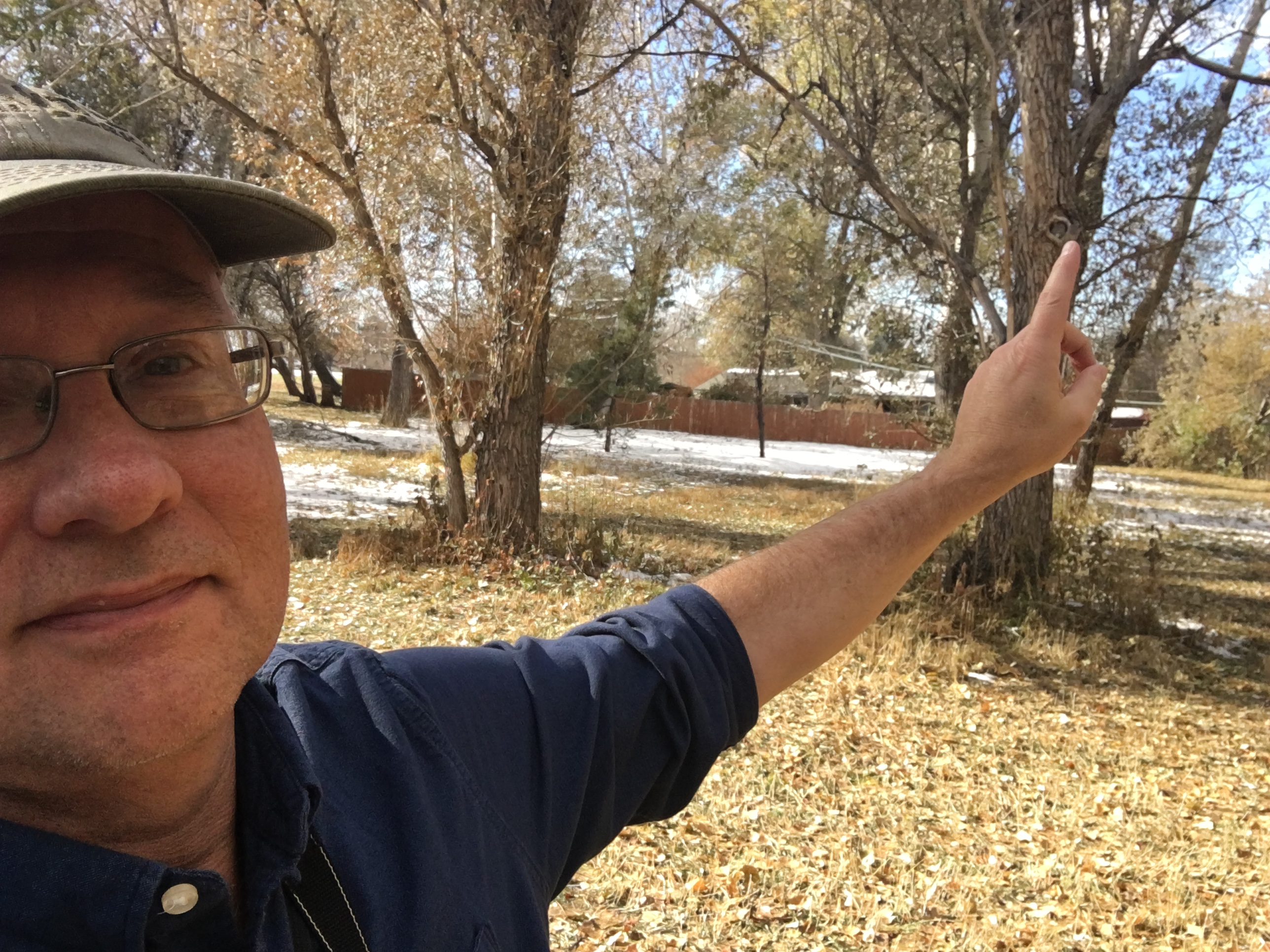 The owl paid me no attention whatsoever. It sat motionlessly for the first five minutes with its eyes closed. Then it preened its belly feathers which made it look like it had two large white tufts sticking out. But when a couple of crows flew over calling nearby, the owl began to get nervous. It looked up and around in all directions. (You can hear the crows through the background noise in the video and see the owl looking around.) After another two or three minutes, it turned and ducked back down into its hole out of sight. 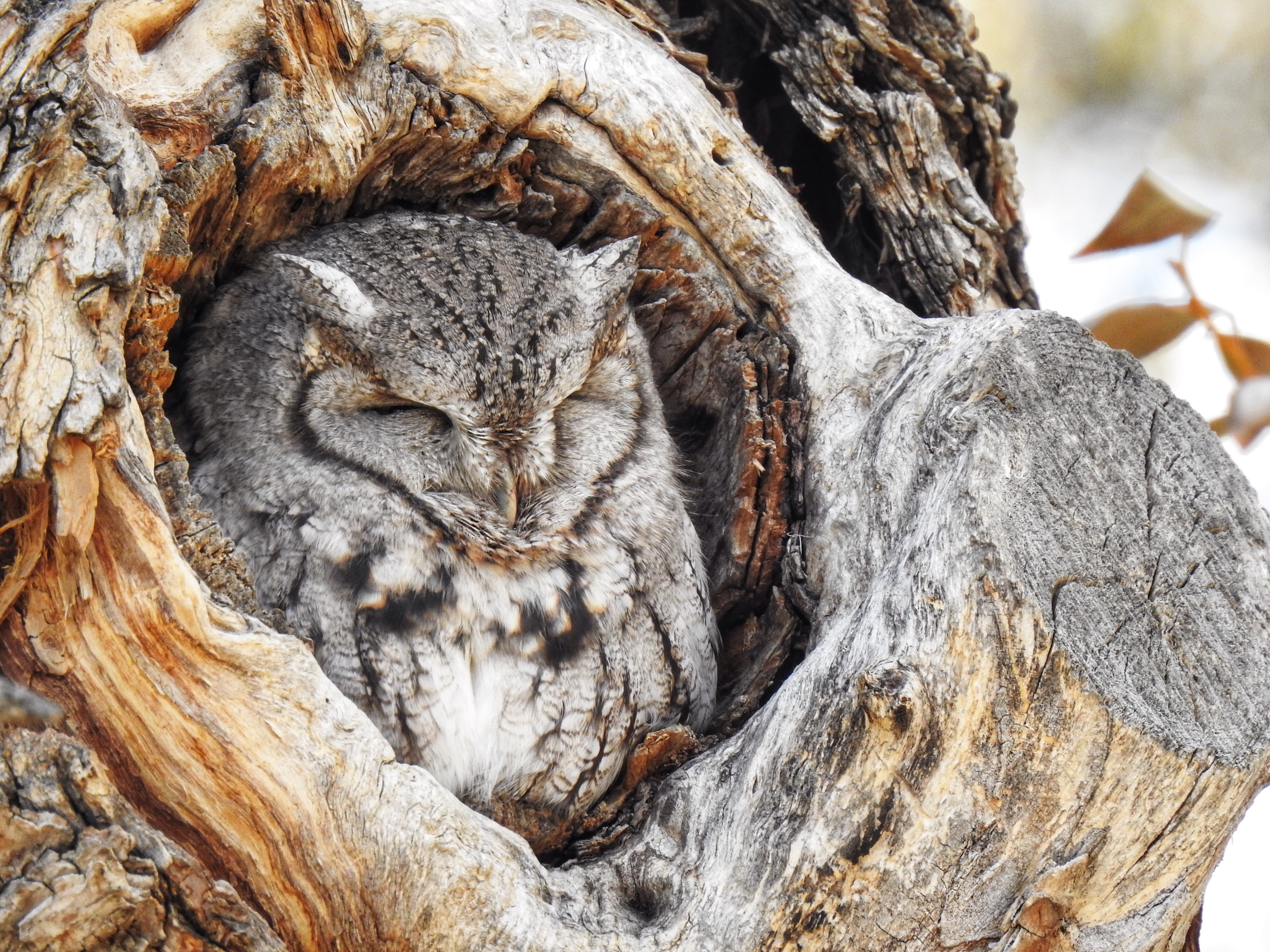 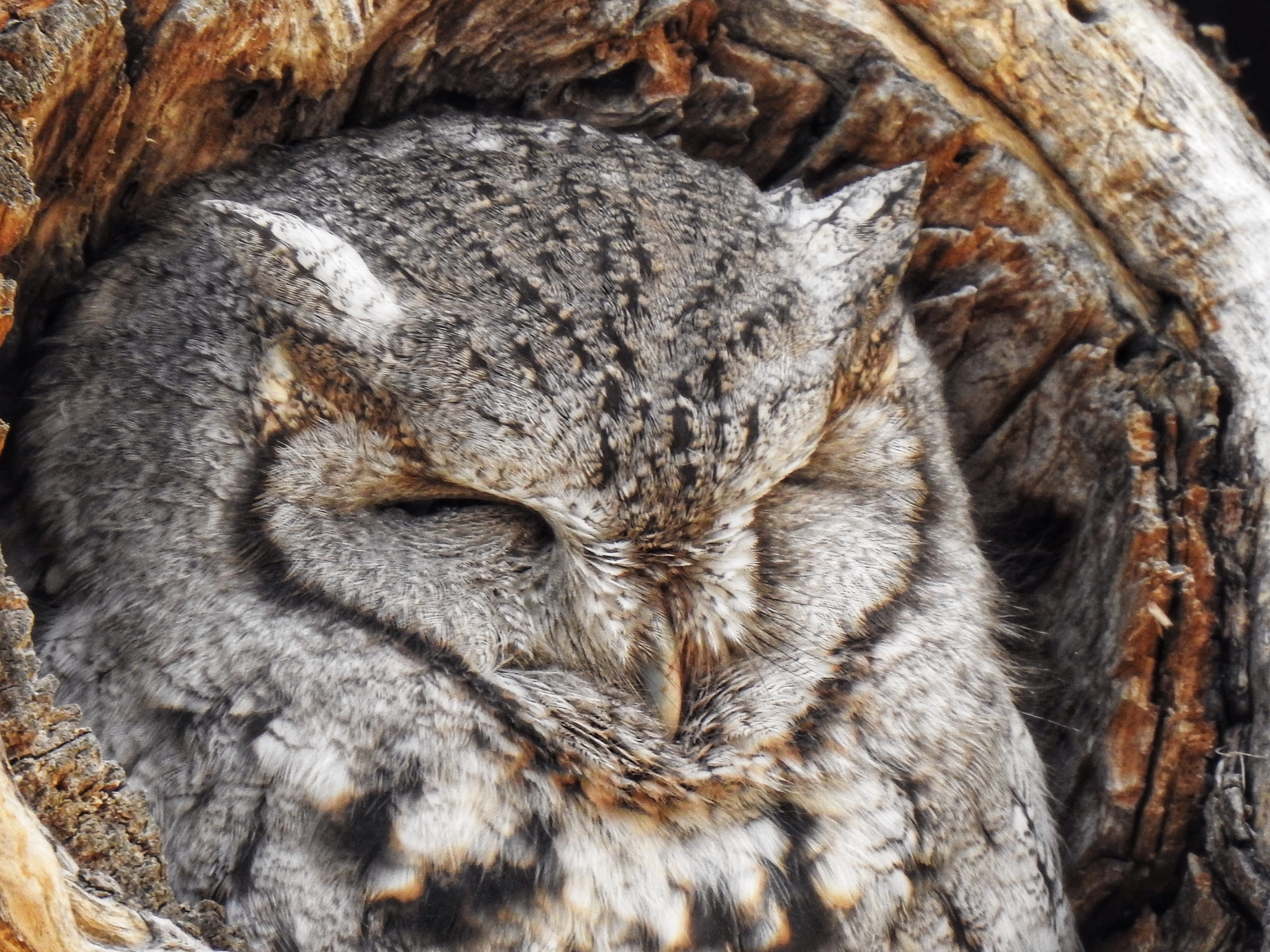 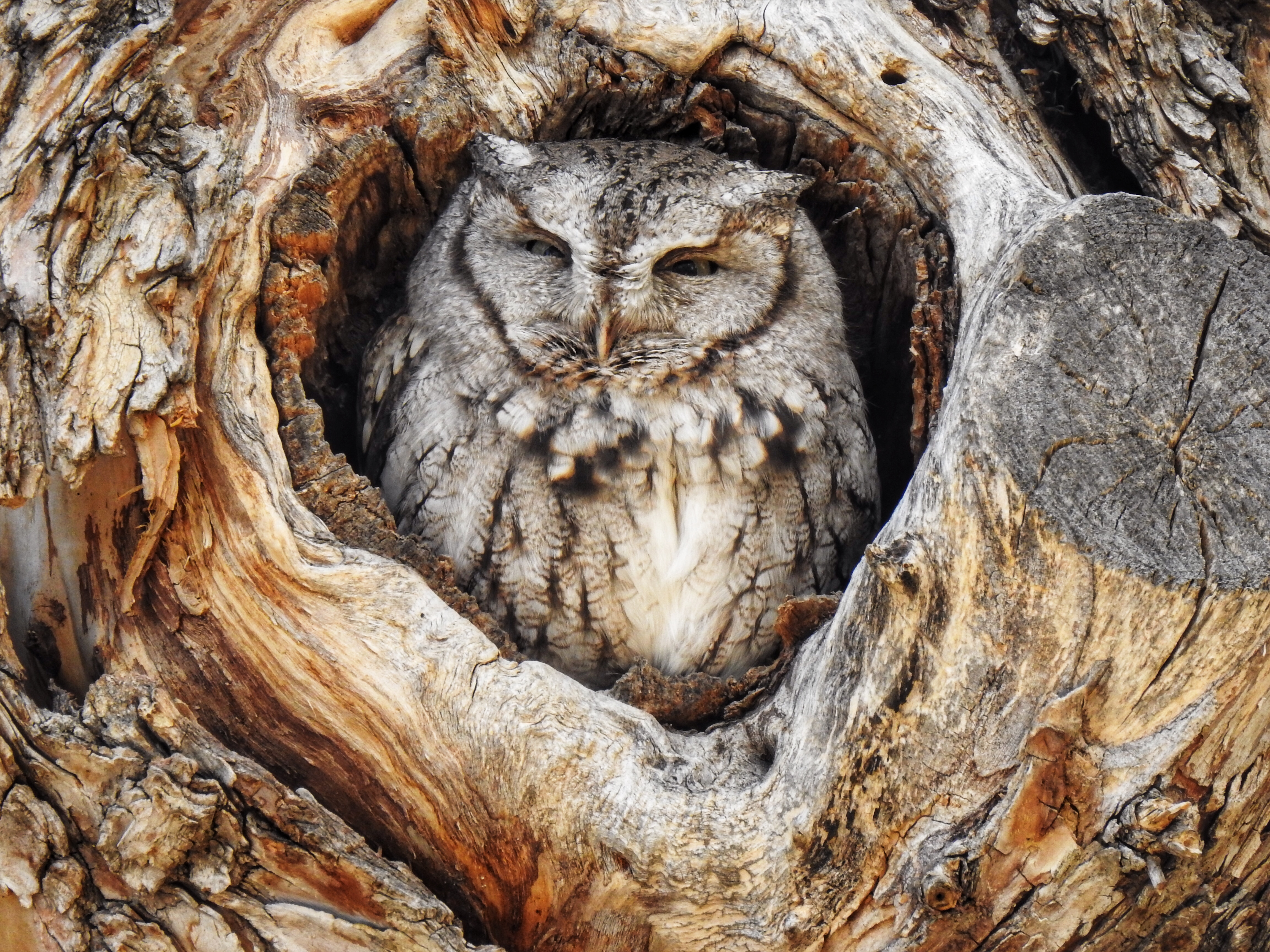 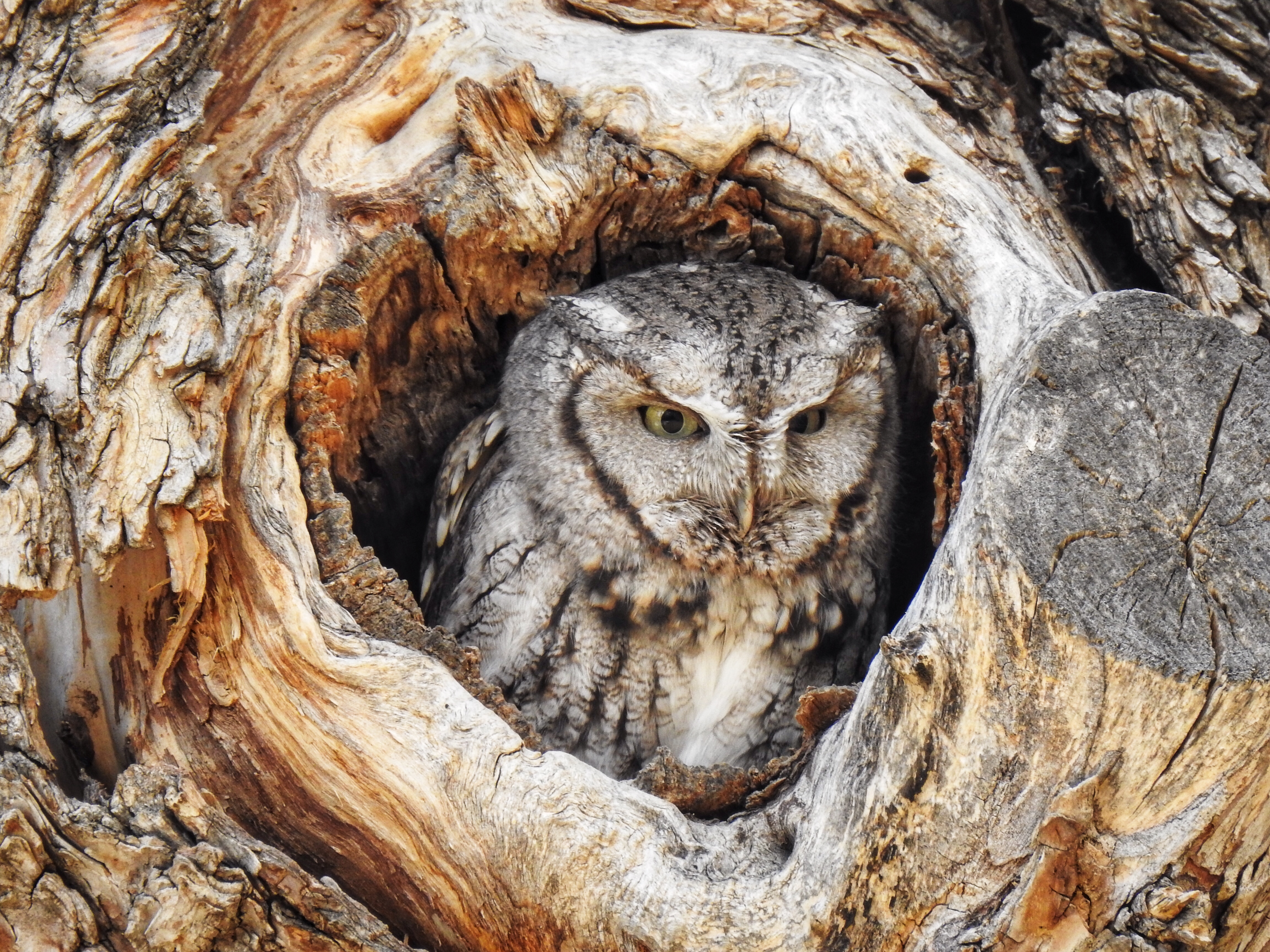 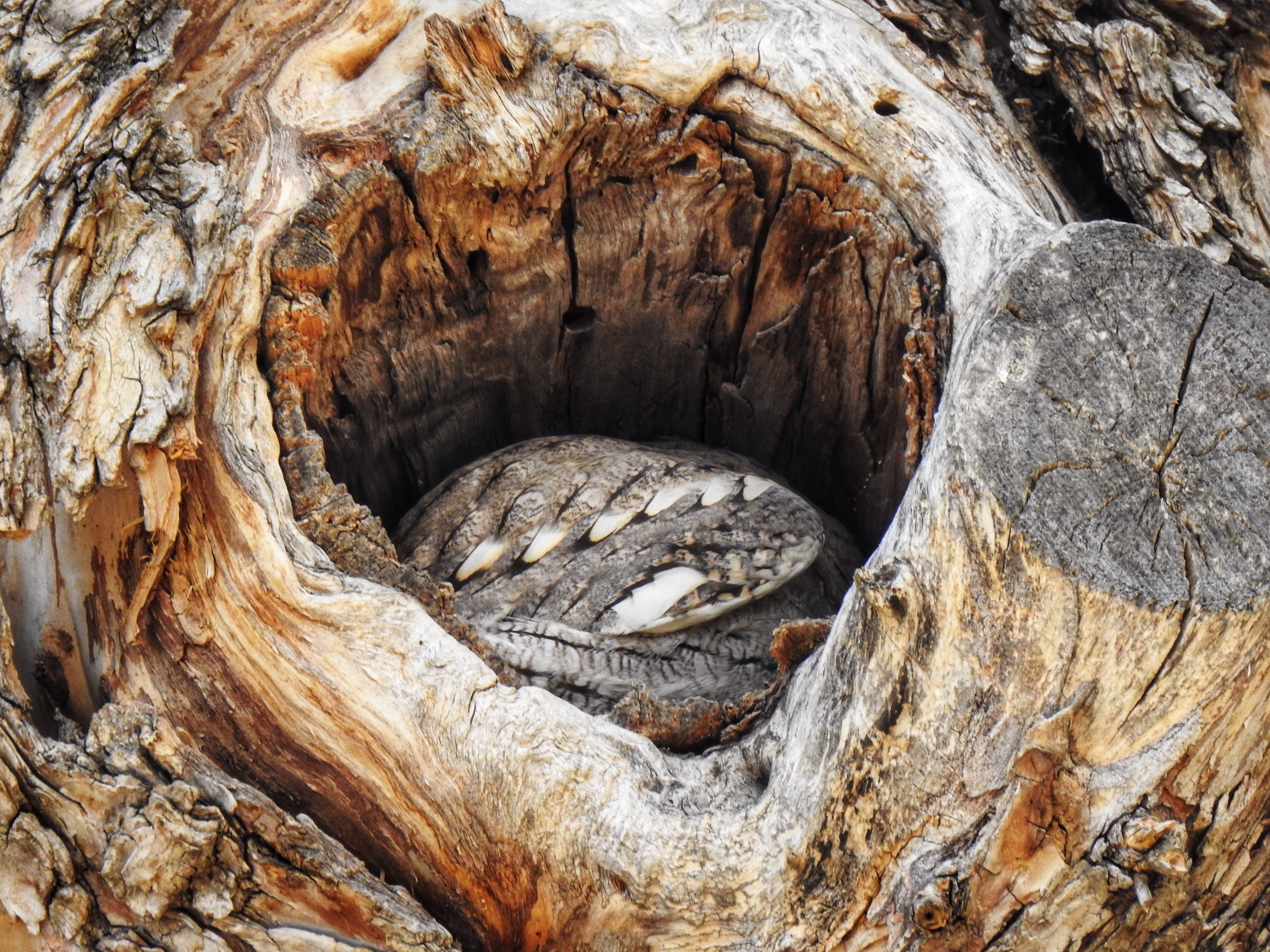