artemisiospiza (from artemisio, sagebrush, from the Greek myth of Artemis, the moon goddess skilled in the use of hallucinogenic plants, and spiza, finch) nevadensis (of Nevada)

This lifer sighting was a combination of effort and luck. The effort was the time and energy to get to the appropriate habitat. Sagebrush Sparrow is fairly common in Nevada, Utah, and Wyoming, but not in Colorado. A few are found along the Front Range during spring migration, but they’re rare enough there to make the rare-bird reports, and I’ve missed on my few attempts to see one. They breed on the western edge of the state and in the San Luis Valley. The closest area where they’re seen with any consistency is a three-hour drive from my house near Great Sand Dunes National Park. The specific location where they’ve been sighted most recently (on June 2, three days before) is 50 miles south of the park near Costilla, New Mexico. I left home at 6:00 and arrived in Costilla a few minutes after 9:00.

The luck was in seeing the bird at all. I found County Road B-051, a dirt road through sagebrush flats and cropland. I had the exact location where they’d been seen mapped out, but I kept my eyes open as I drove to it. I wasn’t on the road for five minutes when I saw a small bird fly about 50 yards in front of my car. Although I was still moving, I managed to follow the bird’s flight and see it land on top of a sagebrush bush. I braked and while still behind the wheel, looked through my binoculars and knew I had my lifer. I got out for a closer look. For perhaps three minutes, the Sagebrush Sparrow flew from bush to bush, never closer to me than 20 yards away. Then it disappeared down into the brush, chasing another bird which may have been a second Sagebrush Sparrow. It paid no attention when I played its song, although its closest approach came in response to the pishing noises I made. I managed to get a few mediocre but diagnostic photos but figured I could do better when I got to the places where others have seen them in recent days.

I drove slowly and even got out and walked along the road, but I never found another one. I read later that Sagebrush Sparrows just sing early in the morning and are secretive at other times. I was lucky I spotted the one I did since it wasn’t doing any singing or even acting conspicuously. Six hours (round trip) is a long way to drive to see a bird for three minutes. But it would have felt a whole lot longer if I hadn’t seen it. 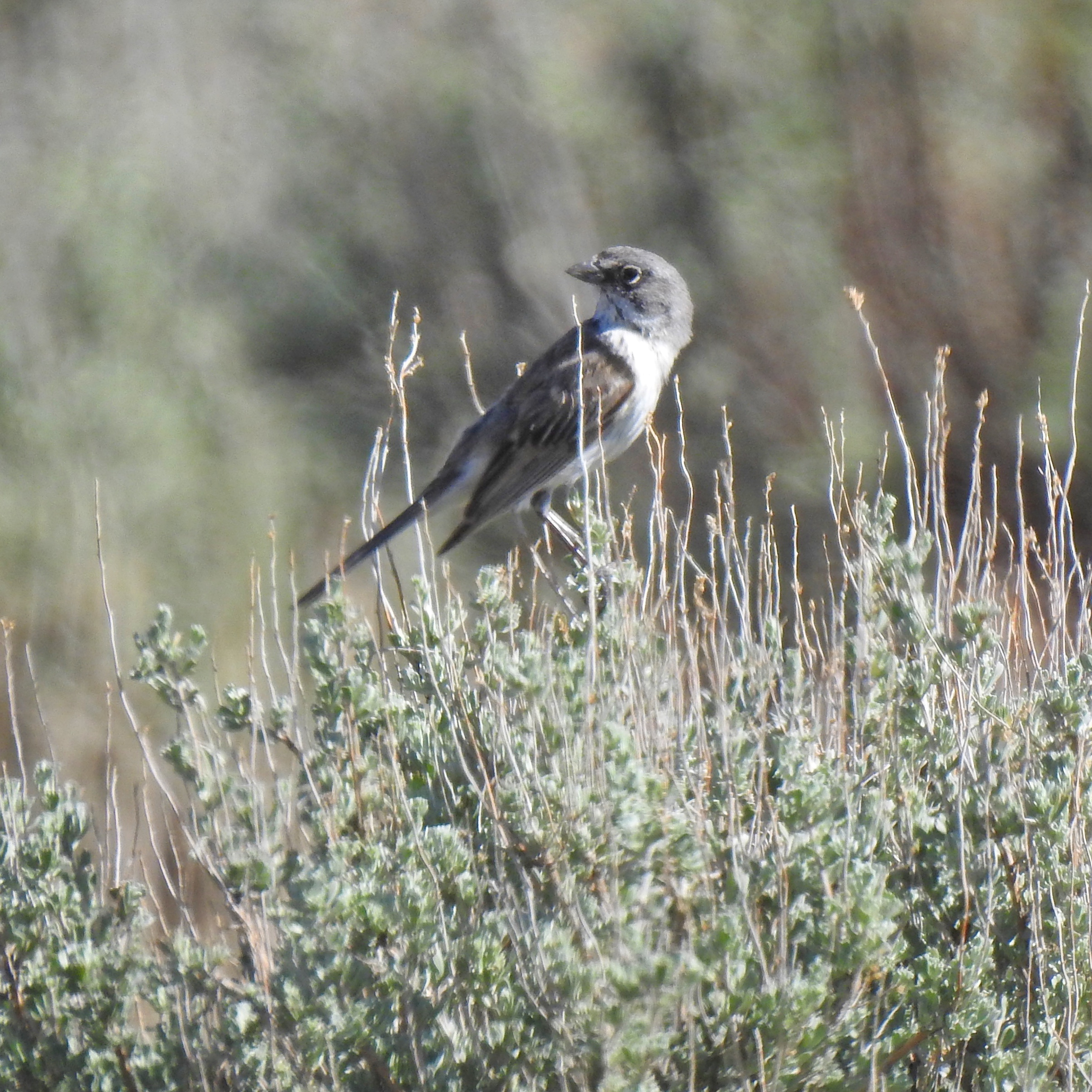 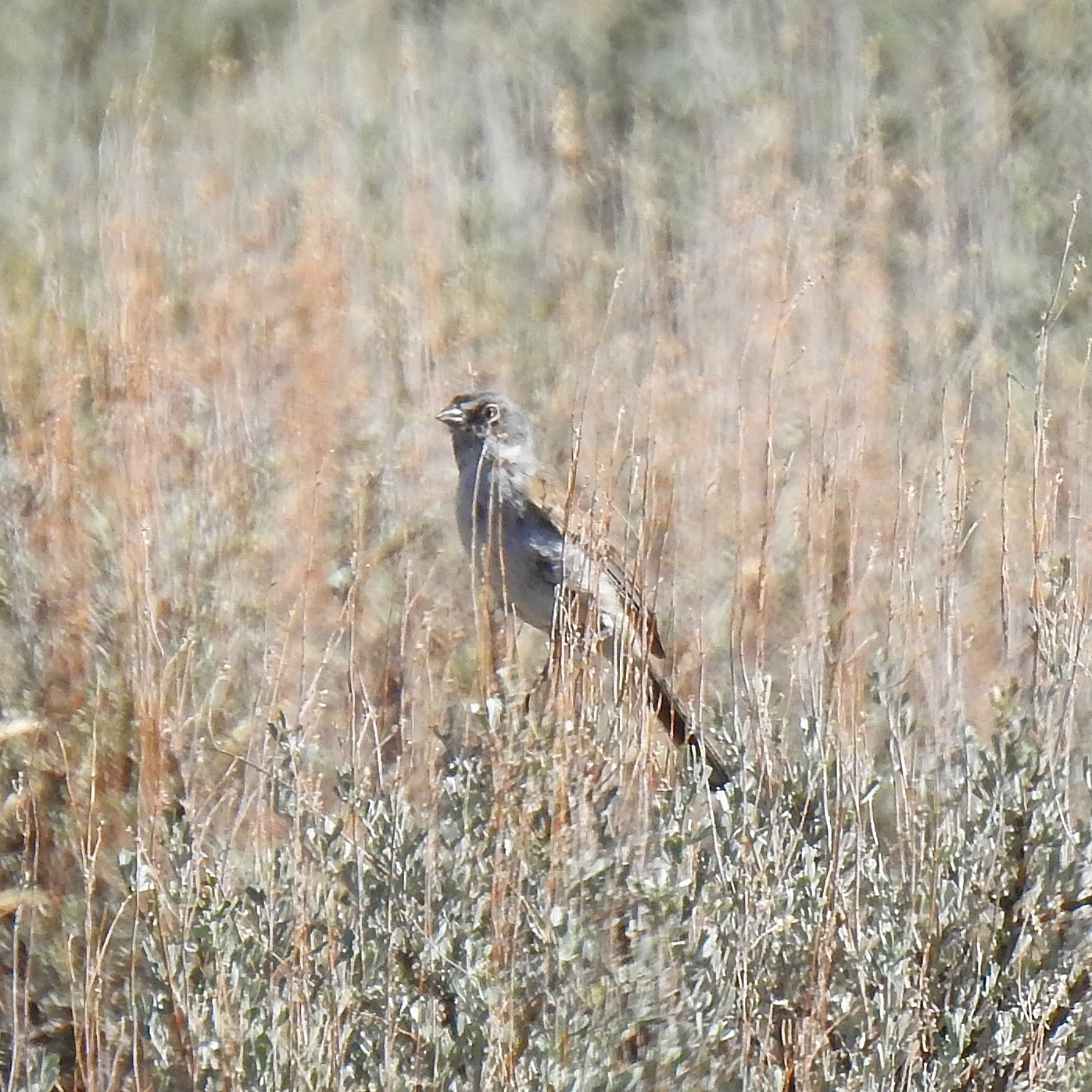 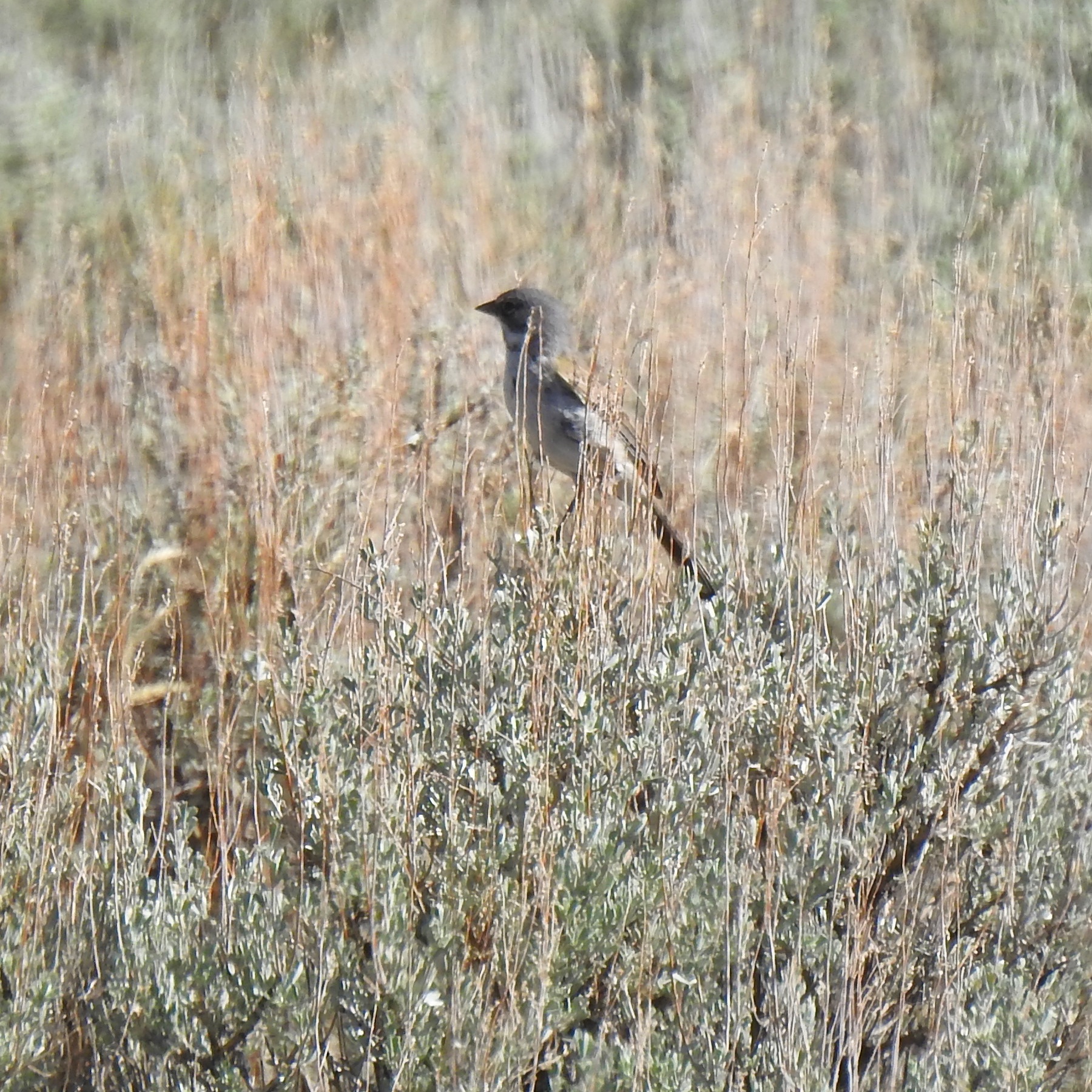 Sagebrush Sparrow and Bell’s Sparrow were considered a single species—Sage Sparrow—until 2013. I saw a Bell’s Sparrow in California in 2015.  The Sagebrush Sparrow is a medium-sized sparrow with a long tail, a streaked brown back, and a gray head. It has a narrow black throat stripe, a white eye-ring, and a white spot in front of the eye. The breast and belly are white with a dark smudge on the breast. It lives in extensive sagebrush flats and spends most of its time running on the ground, generally only perching in the open to sing early in the morning.