This was a very cooperative bird. It was first found along the shore of an artificial lake in the middle of Pine Bluff, Arkansas, over a year ago—on December 12, 2019, to be exact. We didn’t get to Arkansas for Christmas last winter, but the bird stuck around, and I hoped it might still be in the area when we went camping in March. But camping was canceled due to stupid, and the bird was last seen on March 16 anyway, so …

But then the same bird was found in the same place again on December 7 of this year and we were heading that way for Christmas. Would it stick around? I drove down to find out on Christmas Eve. It hadn’t been seen for six days, but I figured it was worth a shot. But there was another problem. The day I chose was very windy, with gusts up to 40 mph. Not at all ideal weather for birding. I walked the path along the lake and froze in the damp, cold wind off the water. There were a few pelicans hunkering against the lee shore, but otherwise, I wasn’t seeing much.

I decided to think like a flycatcher. Even if it wanted to be out-and-about in that wind, it wouldn’t be finding any flies. But down below the levy, out of most the wind, there was a strip of swampy woods. I walked along a road through the trees where I was much more comfortable and saw some actual birds.

And a Tropical Kingbird. I first spotted it when it flew to a mid-level perch back in the trees. After flitting here and there a few times, presumably catching flies, it landed on a low branch right along the road and posed for pictures. 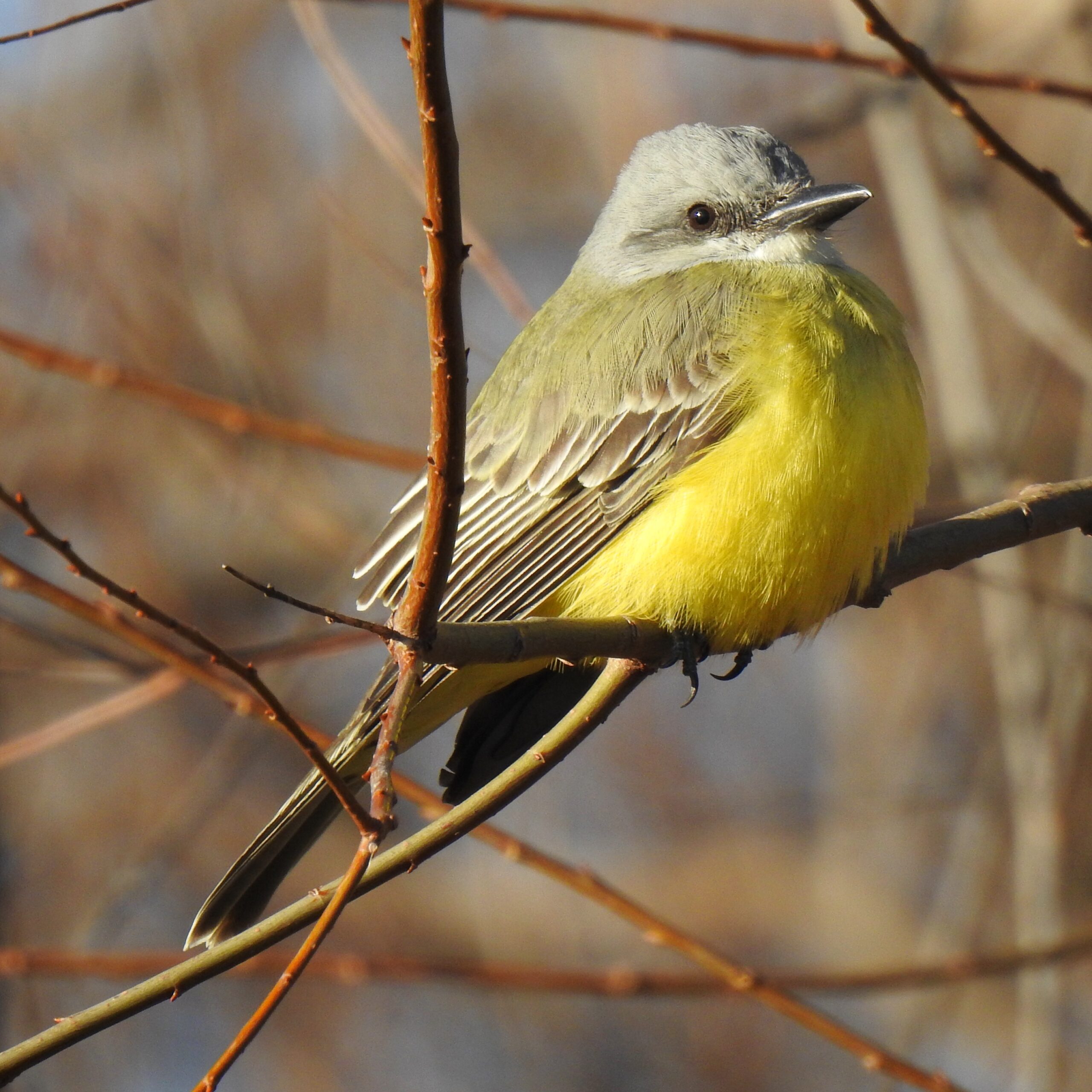 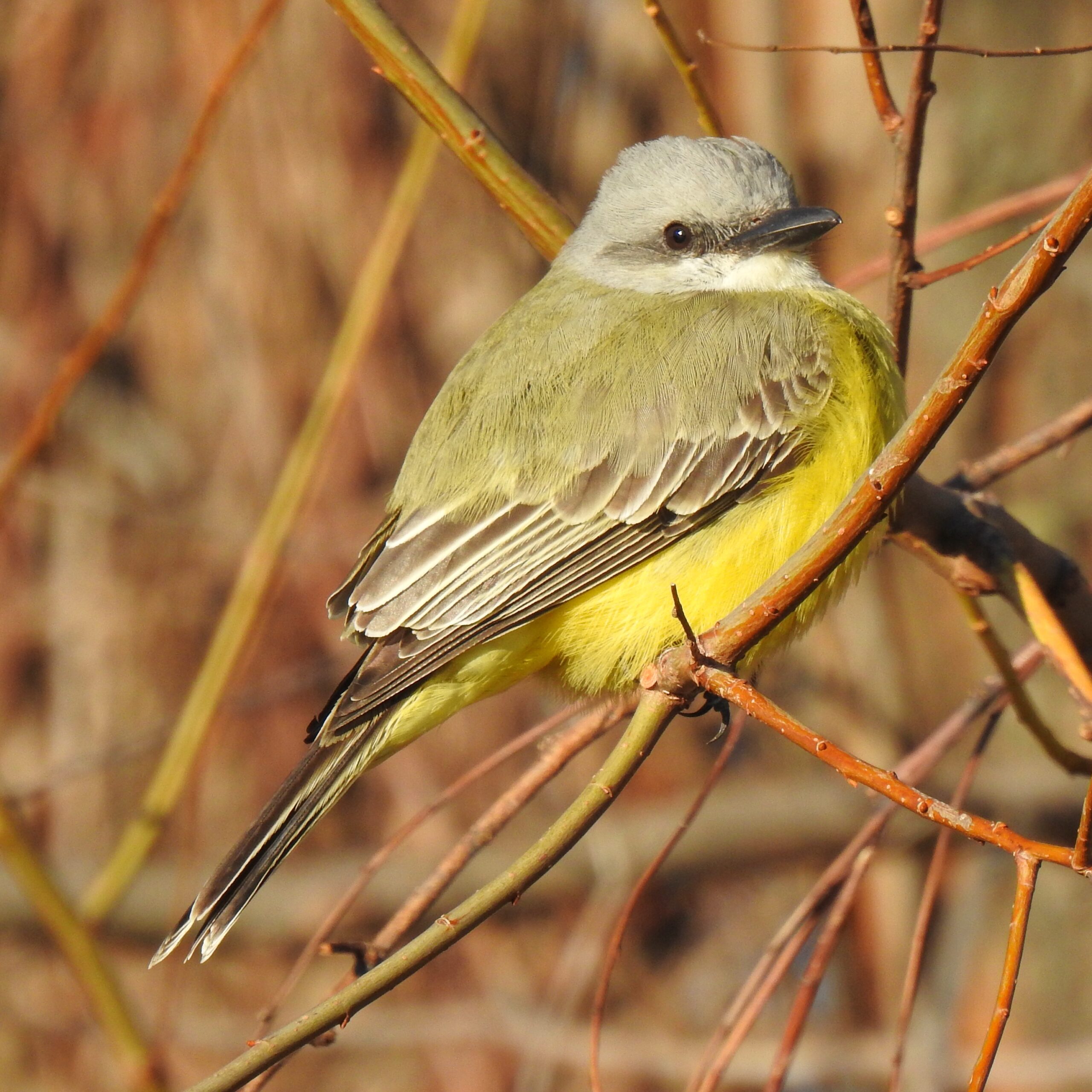 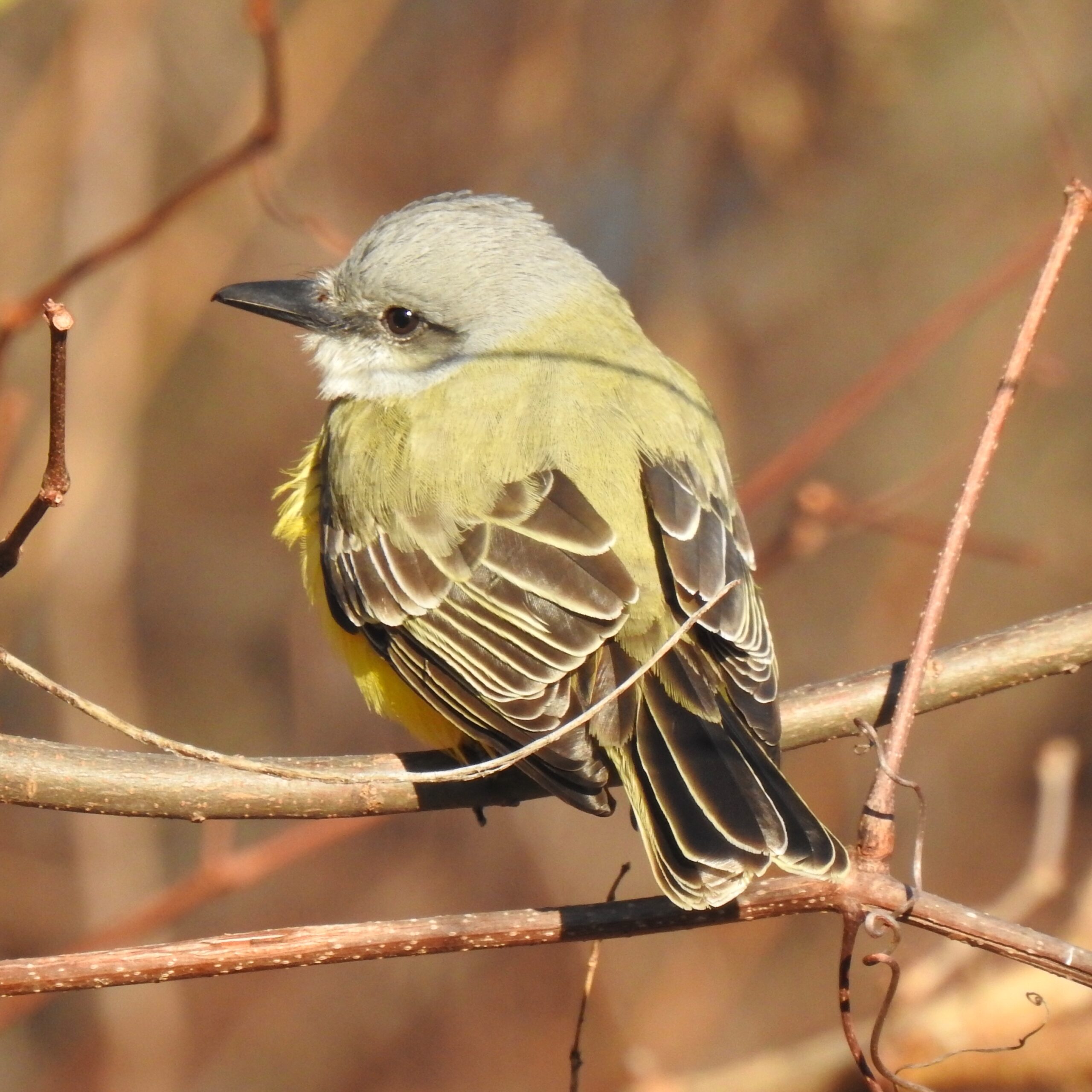 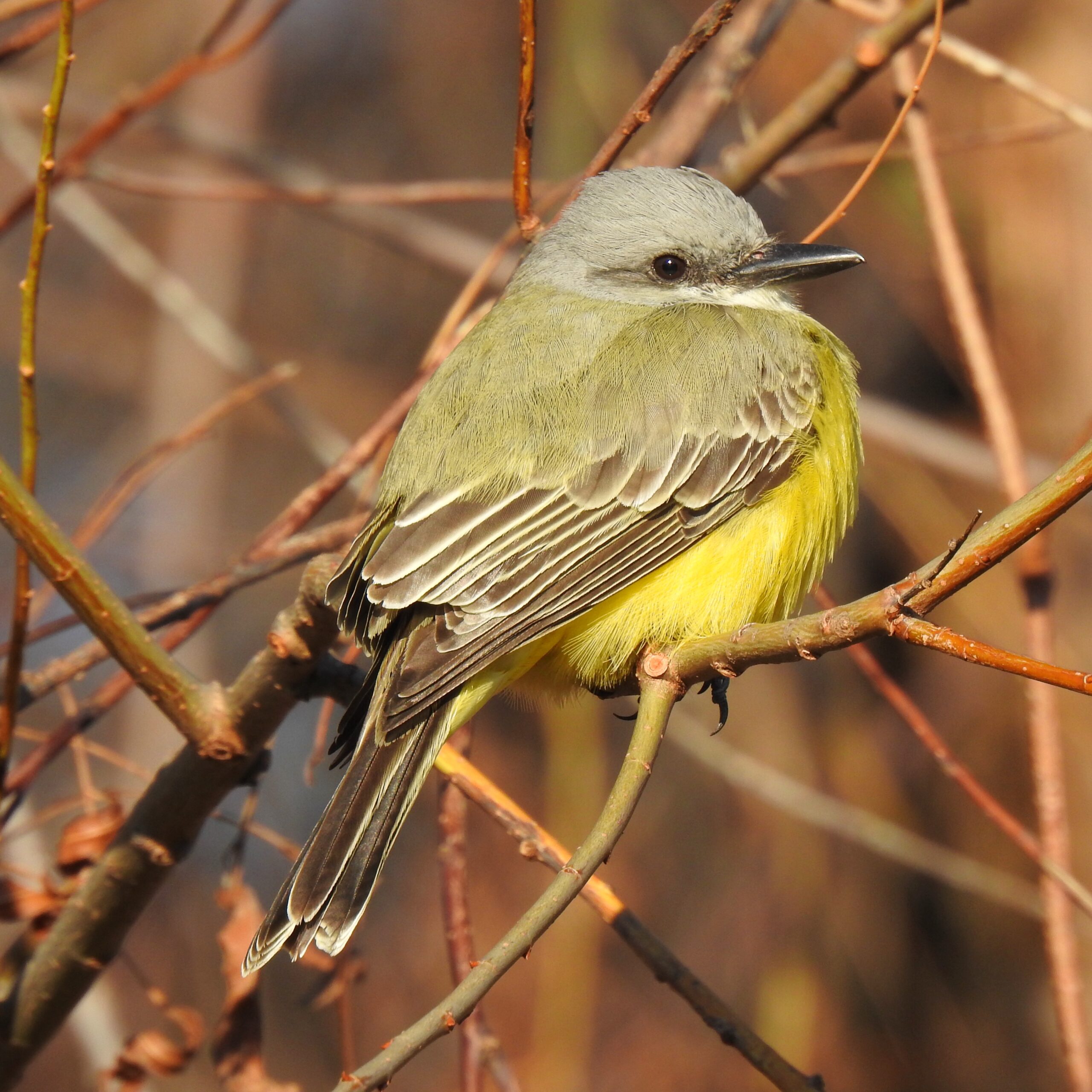 Tropical Kingbirds are found throughout Central and South America. They are commonly only seen in the United States in Texas, Arizona, and California, but they occasionally wander—even as far north as Canada.

The key marks are the size (large for a flycatcher), the long bill, and the bright yellow belly. The wings and tail are brownish rather than gray. The tail is notched and without white edges. It’s almost impossible to distinguish a Tropical Kingbird from a Couch’s Kingbird by sight, but this particular bird has been verified by vocal comparisons. (It made no noise when I was there.) The buffy edges on the wing feathers are also a Tropical mark.

The flycatcher is the tiny greenish-gray spot near the direct center of the photo. The lake is beyond the trees to the left, and that’s the direction from which the howling winds were coming. 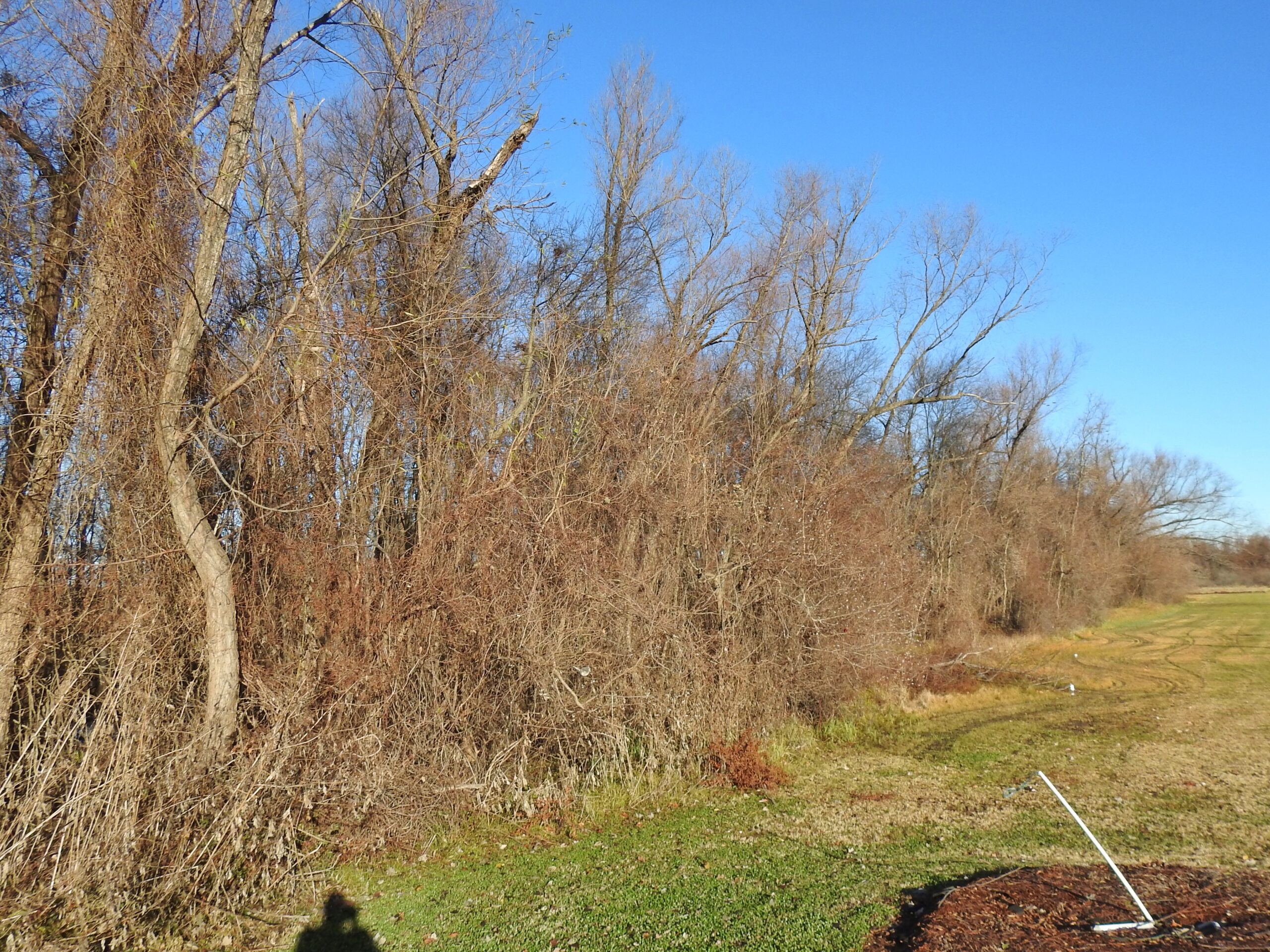 I stuck around for perhaps 15 minutes, but after its initial flurry of flying about, it pretty much just sat on the branch, out of the wind, and looked around.