The wisdom on Flammulated Owls is that they are rare and very difficult to find. They live in mountain ranges around the west from Mexico up into Canada. The “difficult to find” part made sense—they are tiny (about the size of a cell phone), strictly nocturnal, and their call is very soft. To add challenge to this, they are the exact color of the trees they live in.

The rare part may not be true. It may just be that nobody sees them. There’s a guy in Colorado who tracks a population near Woodland Park and I hoped, someday, to drive up to the area some evening and hear one—I didn’t expect to actually see one.

Then I happened upon a website for a guy named Tim Avery who runs Pitta Tours out of Salt Lake City. For $100, he takes people up into the Wasatch Mountains east of the city and all but guarantees an owl sighting. We were planning a trip to Dinosaur National Monument this summer, so we decided to extend it by a couple days and a few hundred miles.

Tim picked me up at our hotel at 8:45 pm. We drove most of an hour up Big Cottonwood Canyon and into Pine Canyon. We parked in a small dirt lot and walked about 100 yards up a path to a grove of aspen. The field guides say that Flammulated Owls live in mixed oak and conifer woods, and they do. But Tim has discovered that they also live in aspen woods, which are much more open, and therefore a much easier place to find owls.

We stood in the dark and Tim played the owl’s “song,” a low “who” repeated every couple seconds. Before long, he said he heard one. I heard nothing. He then switched to the territorial call. A minute or so later, he shined his flashlight about 25 feet up an aspen and lit up an owl.

I knew it was small, but I hadn’t expected it to be that small. My first attempts at photos didn’t work, but Tim patiently told me how to set my cameras. The owl flew over our heads and landed in another aspen, and this time I got photos. 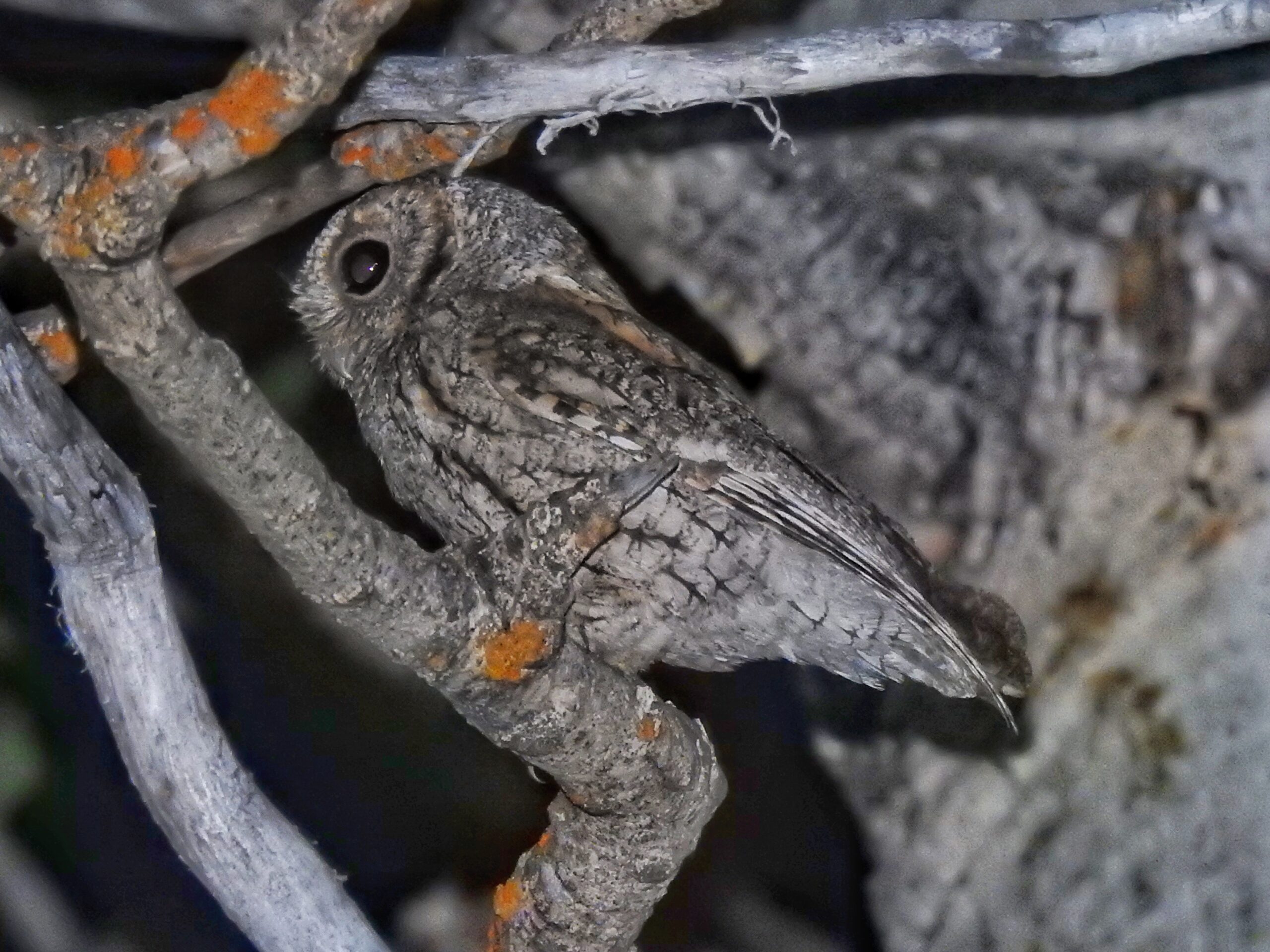 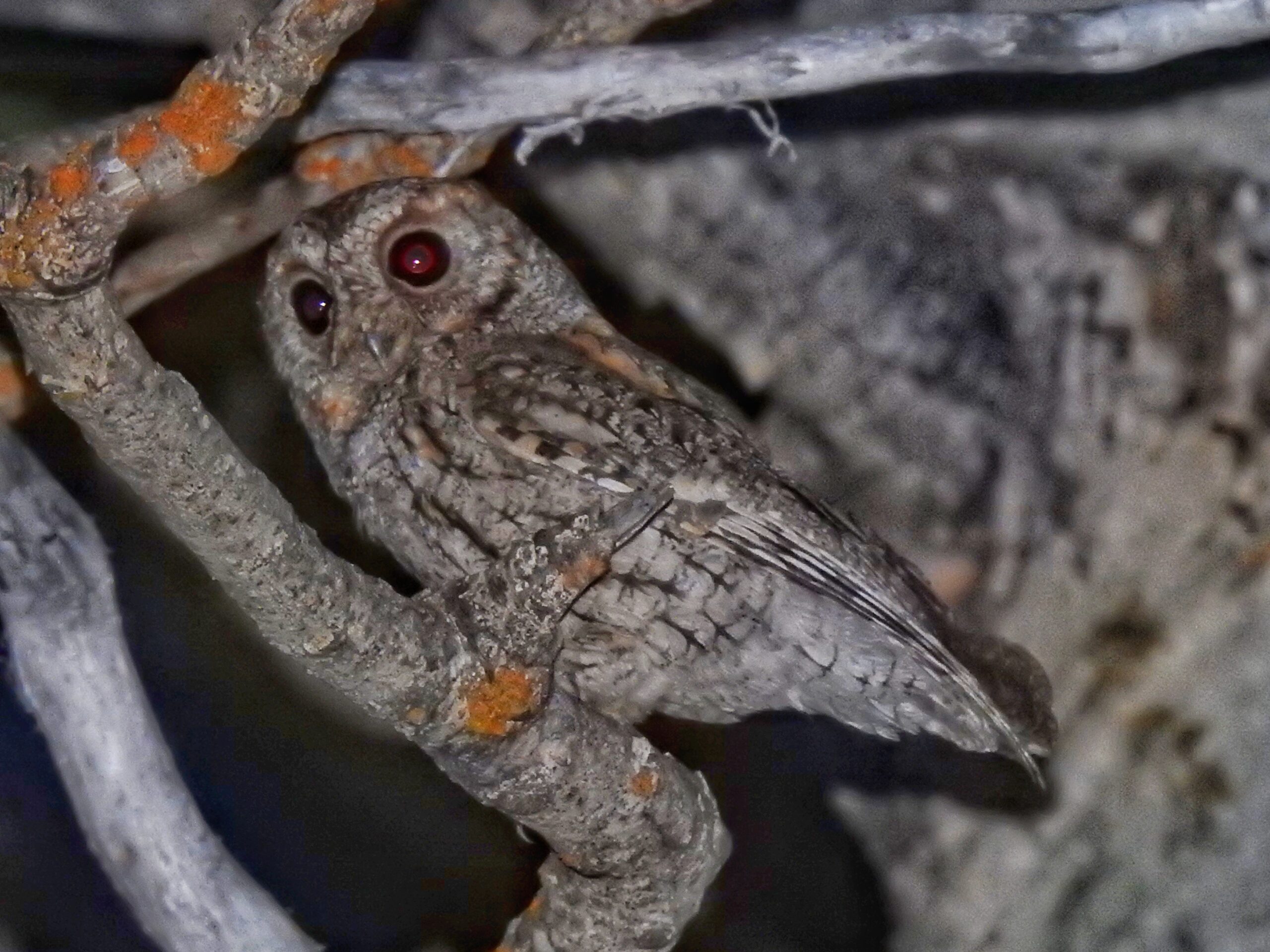 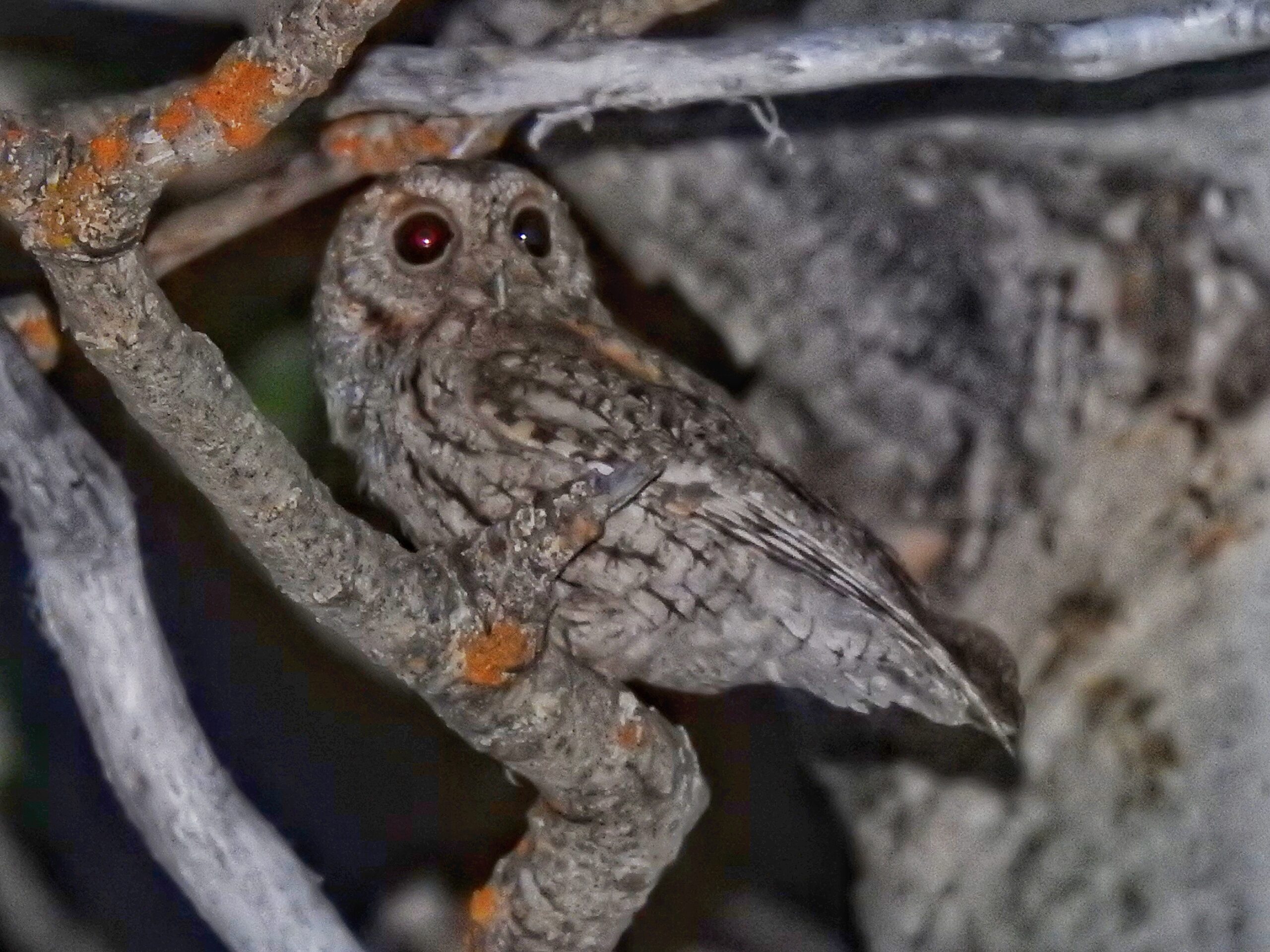 The owl continued giving its soft hoots, but even then it took me a while before I picked up on the sound. After a minute or so, it took off.

Tim and I exchanged fist bumps. It’s a big relief to him when a client gets a lifer and photos. We walked back to his van and headed back toward Salt Lake City. We stopped about five other places. I finally began hearing the owl’s sound and was a bit of help to Tim as we tried to locate other owls. There was a ridiculous amount of traffic at 11:00 pm on a remote mountain road that went nowhere. I think I heard two Flammulated Owls that we didn’t see.

We finally saw a second one along the paved road in a taller stand of aspen. This one was higher up—maybe 40 feet up the tree, so my photos aren’t as good. After a minute or so, it flew over our heads to another aspen across the road and stayed there for a couple more minutes. 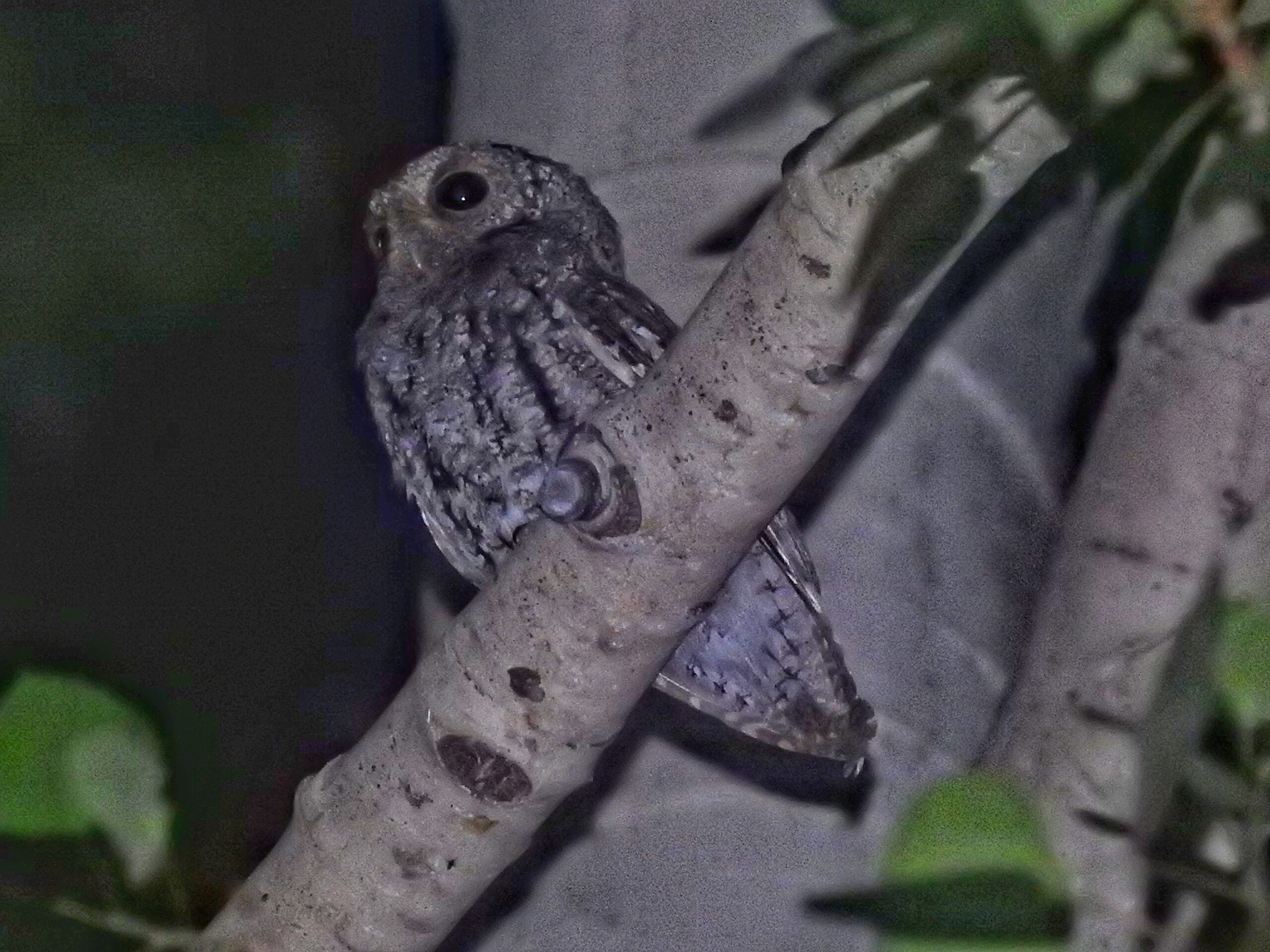 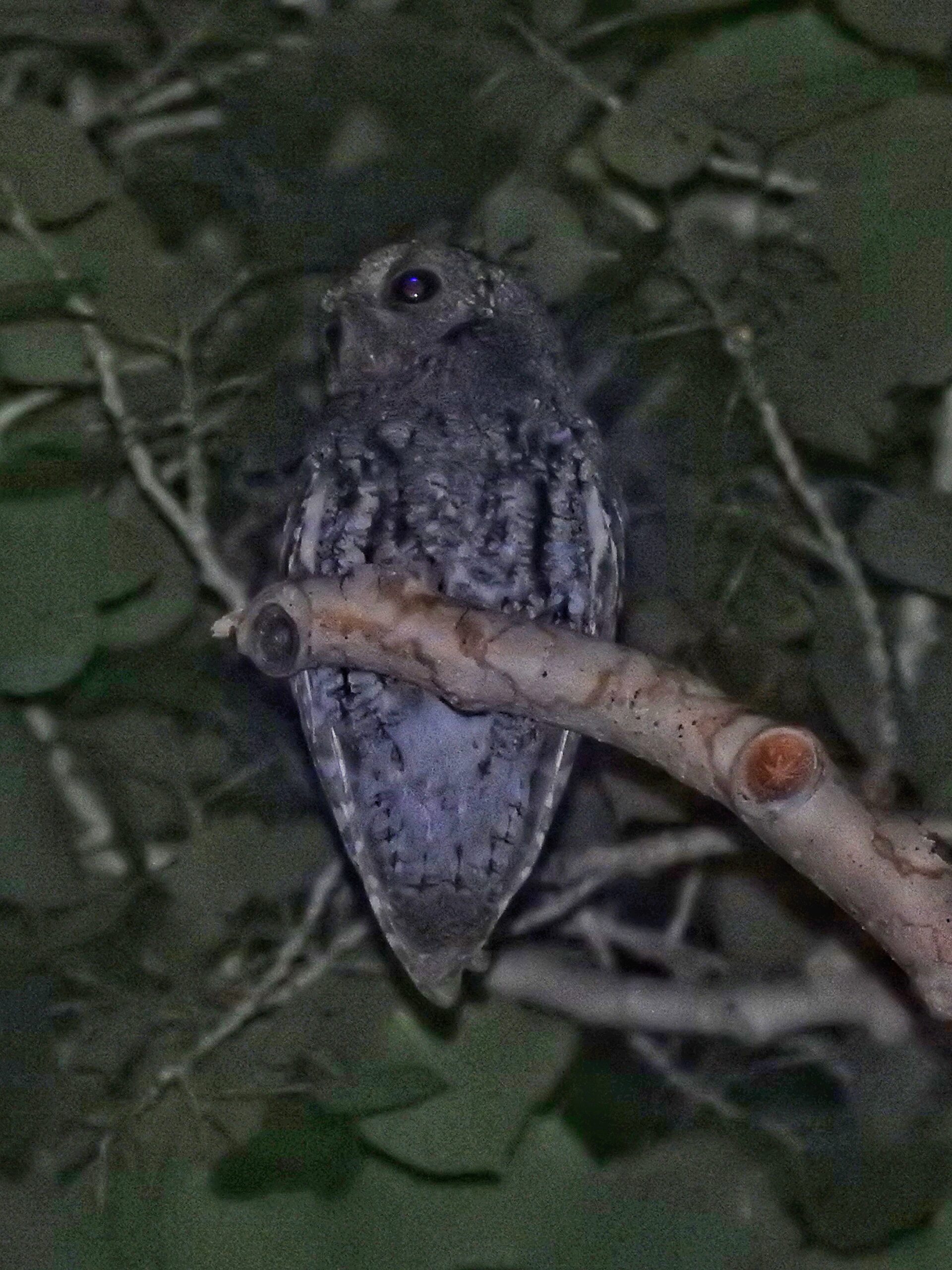 We made one more stop in Big Cottonwood Canyon and heard, but did not see, another one.

Although I’ve managed to spot many of the North American owls over the years, I’d never been owling at night before. I’d also never paid a guide to take me to a bird. I’d much prefer to find them on my own, but in the case of the Flammulated Owl, I doubt I’d have succeeded.

The Flammulated Owl has a redder (more flame-like) phase, but the two we saw were gray with just a little bit of rufous around the face and on the wings. I didn’t see the ear-tufts on either bird we spotted. The eyes are dark and reflected red (which I’ve muted in my photos). The call is not only very soft, but very hard to pinpoint. Tim’s ability to locate them amazed me. You can hear the owl calling in the video, along with Tim’s clicking noise to make it look at us.

He dropped me off back at my hotel at midnight. It was a long day that began at 5:00 am when I set forth in search of my lifer Gray Vireo, but it was a riot.