I’ve been hearing for a while now that ornithologists have identified 10 different types of Red Crossbill. None of them are distinguishable by field marks, but they each have their own call notes. There are some scientists who believe they may all be separate species. Since I have a difficult time distinguishing between pitches, it sounded like a muddle to me, and I wasn’t really looking forward to potential splits.

In 2017, one of the types was designated as a separate species. It was named the Cassia Crossbill for Cassia County, Idaho, where it lives. While most Red Crossbills are nomadic, moving to wherever the pine cone crop is good, this particular type is sedentary, sticking exclusively to the South Hills and Albion Mountains in southern Idaho. They feed on lodgepole pinecones. This pine produces a more steady crop of cones than other pines, providing food year-round. In addition, there are no Red Squirrels in these mountains, so the crossbills don’t have to compete for food.

When I heard about the new species, I figured it was very unlikely I’d ever get to that part of Idaho to see it. But then we rearranged our vacation to get to Salt Lake City and suddenly we weren’t that far away. I decided to book a night in Twin Falls and take a stab at the Cassia Crossbill.

I left my wife sleeping in our hotel at 5:15 am and headed south. It took me about an hour to get to Diamondfield Jack Campground in Sawtooth National Forest, where Cassia Crossbill is most easily found. The drive through the South Hills was stunning, although about 10 miles of the valley had recently been burned by a forest fire.

The campground itself is just a four- or five-acre clearing in the woods. Most of the 10 or so camping spots were filled, and I felt conspicuous walking around and staring with my binoculars. Fortunately, at 6:15 when I arrived, nobody was up and about. I parked by the entrance, listened to the recording of the crossbill’s call, and set out.

I had only been there about two minutes and hadn’t gone more than 50 feet from my car when I heard the crossbills. I spotted two high on a pine branch and a third on the very top of a pine about 50 yards away. I didn’t bother trying for photos because the birds were silhouetted against the sky. But I had my lifer.

A few minutes later, two flew down to the base of a pine. One of these was a female and one was a juvenile. Here’s the juvenile. 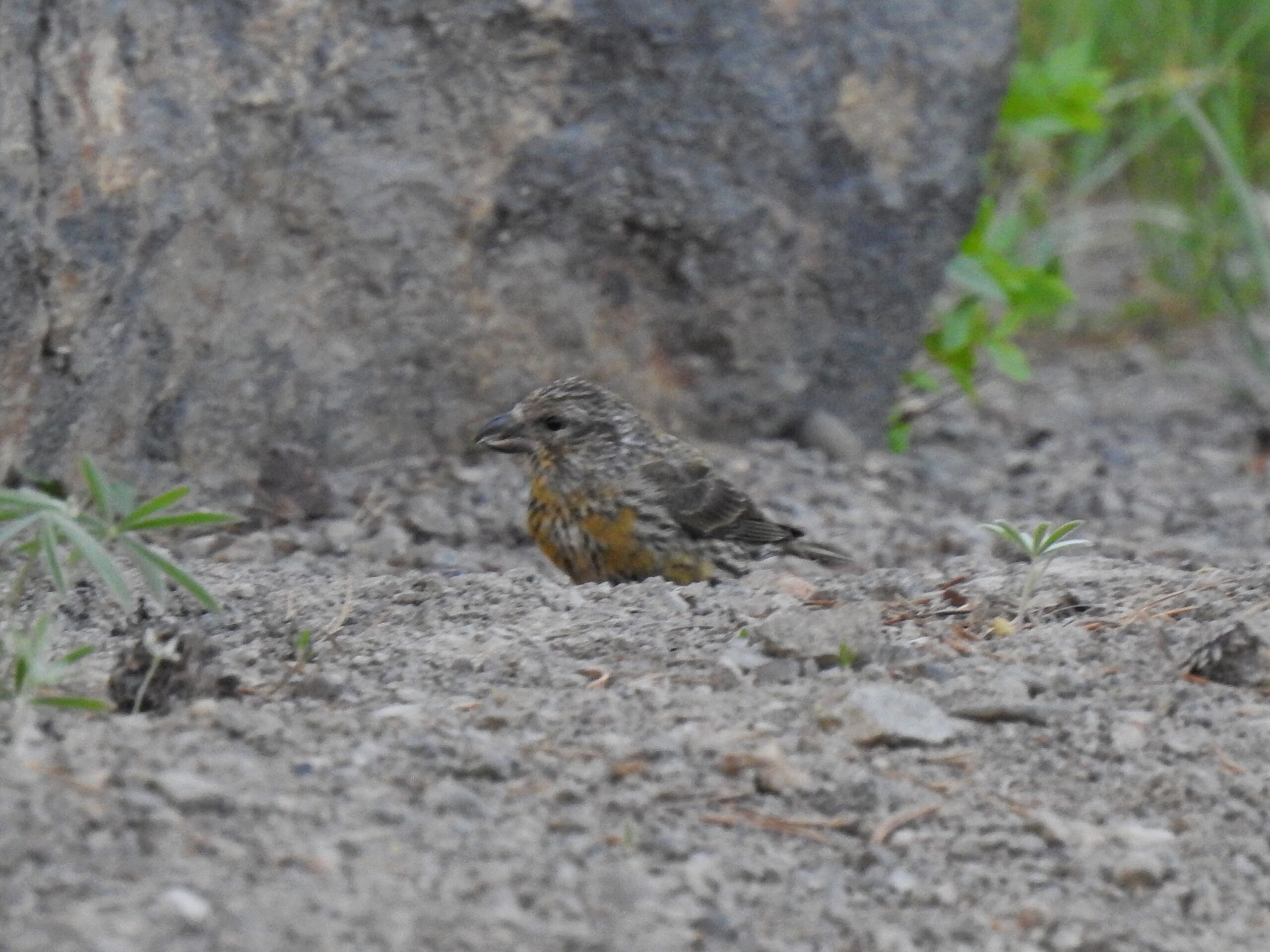 Soon, a male joined them. He flew down to the ground where he was joined by a female. 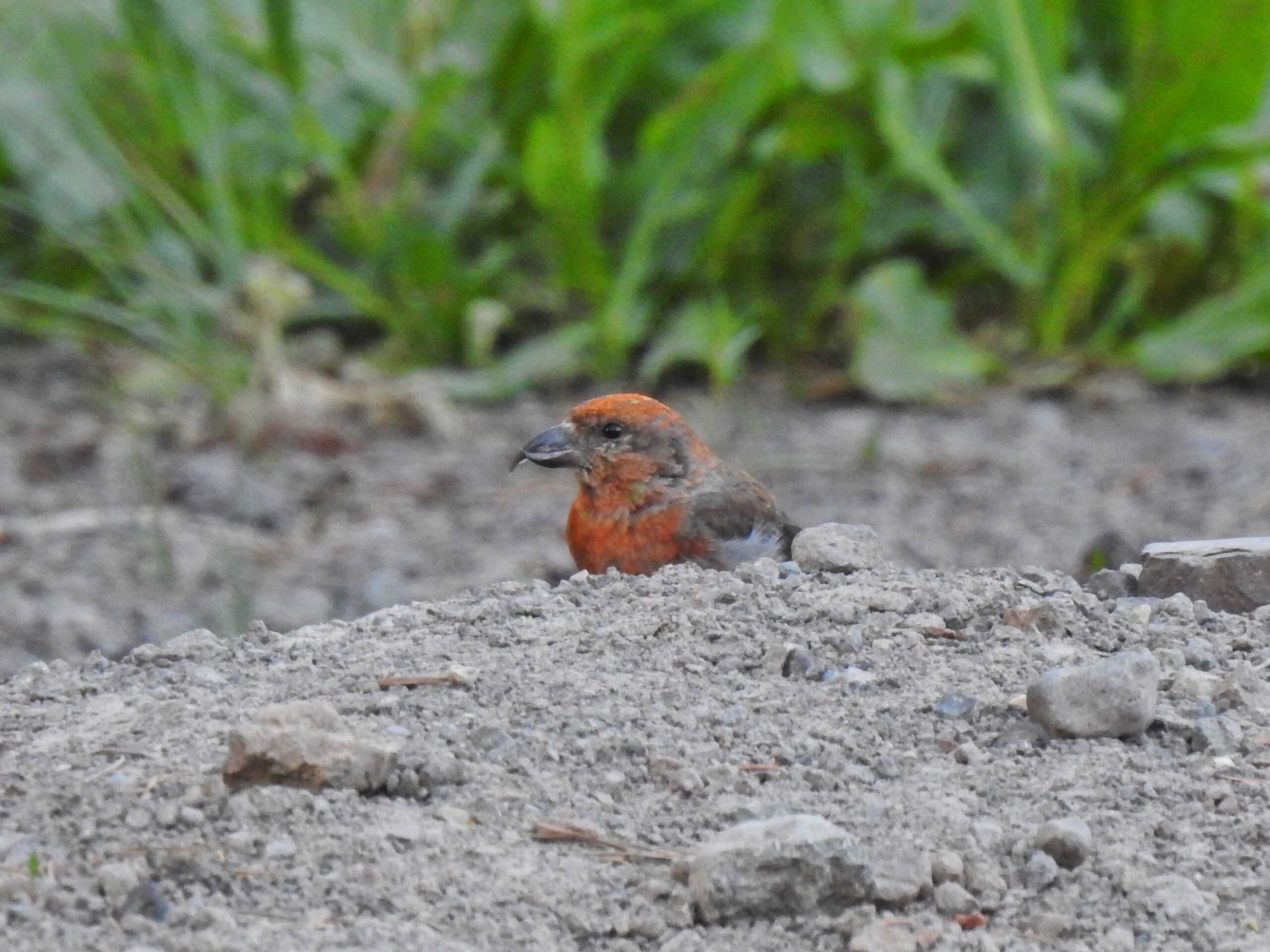 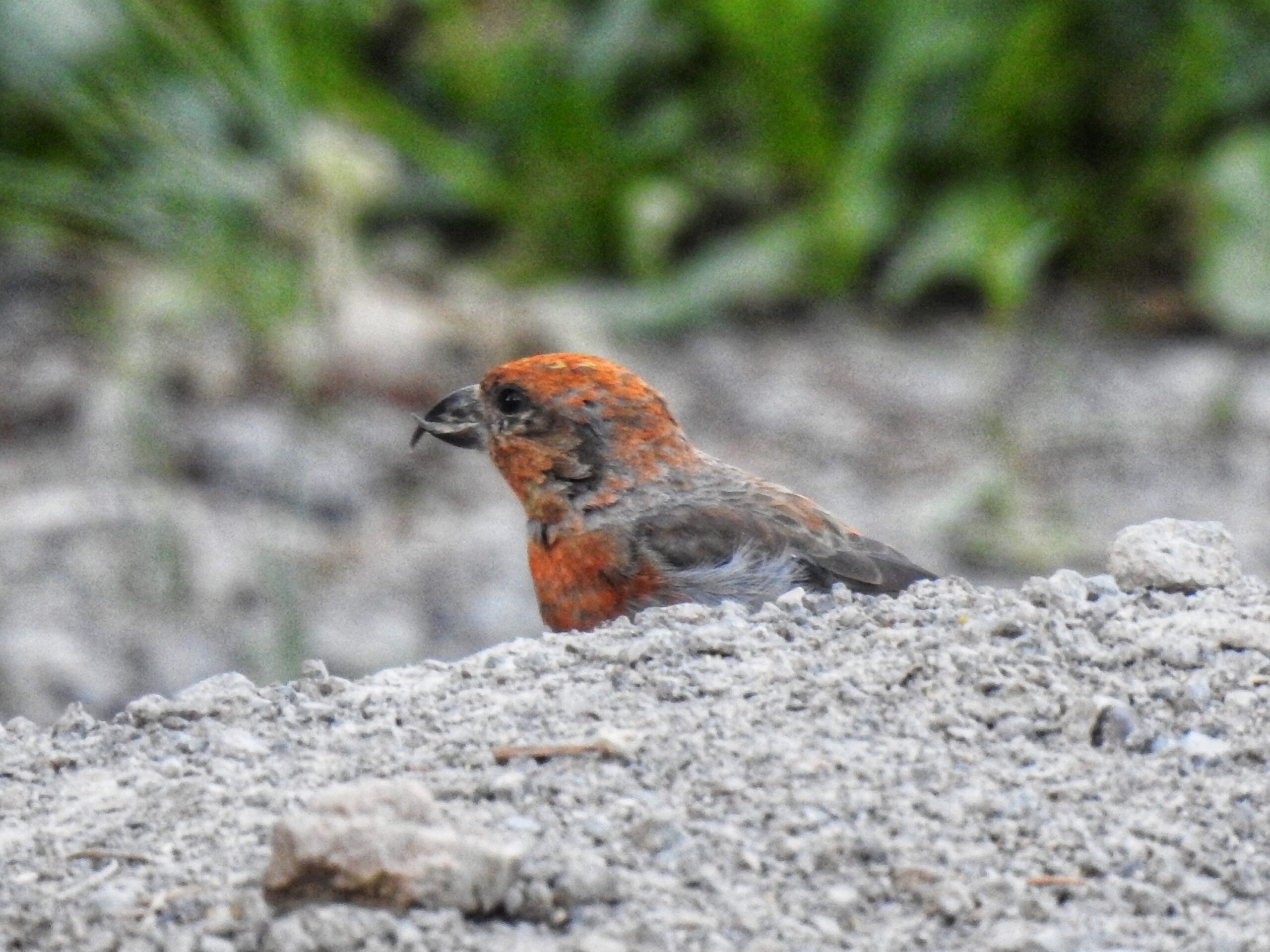 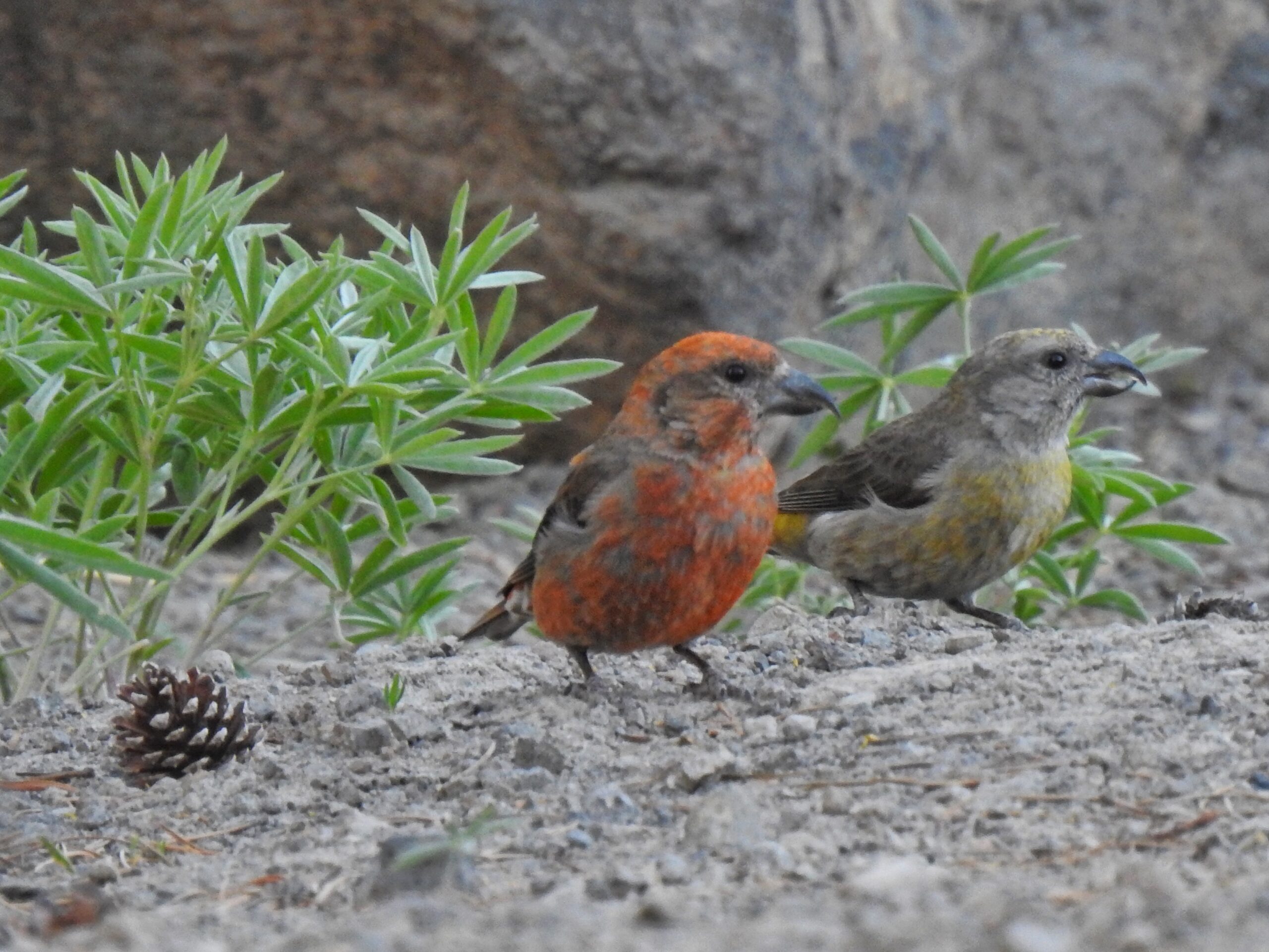 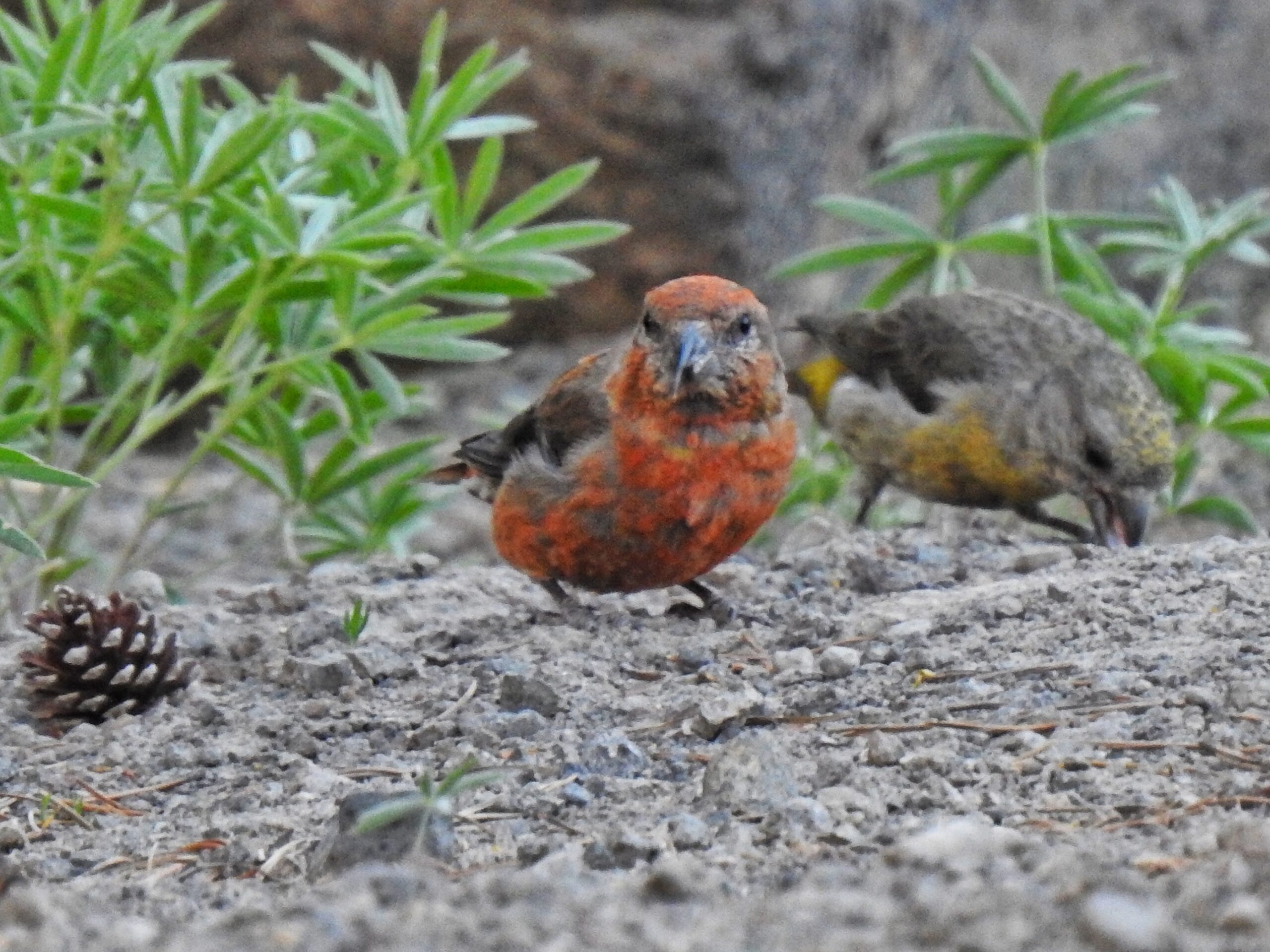 The one in the treetop was still there, so I know I saw at least four. I think I saw two different females, but I’m not sure. After about a minute, they flew back into the trees out of sight and hearing. I wandered down the campground and soon heard them again. They were in the pines behind a couple of RVs, and I didn’t want to intrude. I did manage to record their calls, but I didn’t see them again.

This video of some of my poorer photos has the calls playing in the background. It’s the four- and five-note chip that’s repeated every second or so.

I figured people would be up and about soon, and I wanted to take a shot at the Gray Partridges seen recently along my route back to Twin Falls. (I was unsuccessful.) But I had my lifer.

Other types of crossbills occasionally move through the South Hills. Here’s why I think I saw Cassia Crossbills.

On the far left of this photo of Diamondfield Jack Campground you can see part of a camper. I actually saw the crossbills to the left of that campsite, giving you an idea of just how close to my car they were. I’ve lightened this photo considerably. It was still very much in the morning shade on this end of the campground. 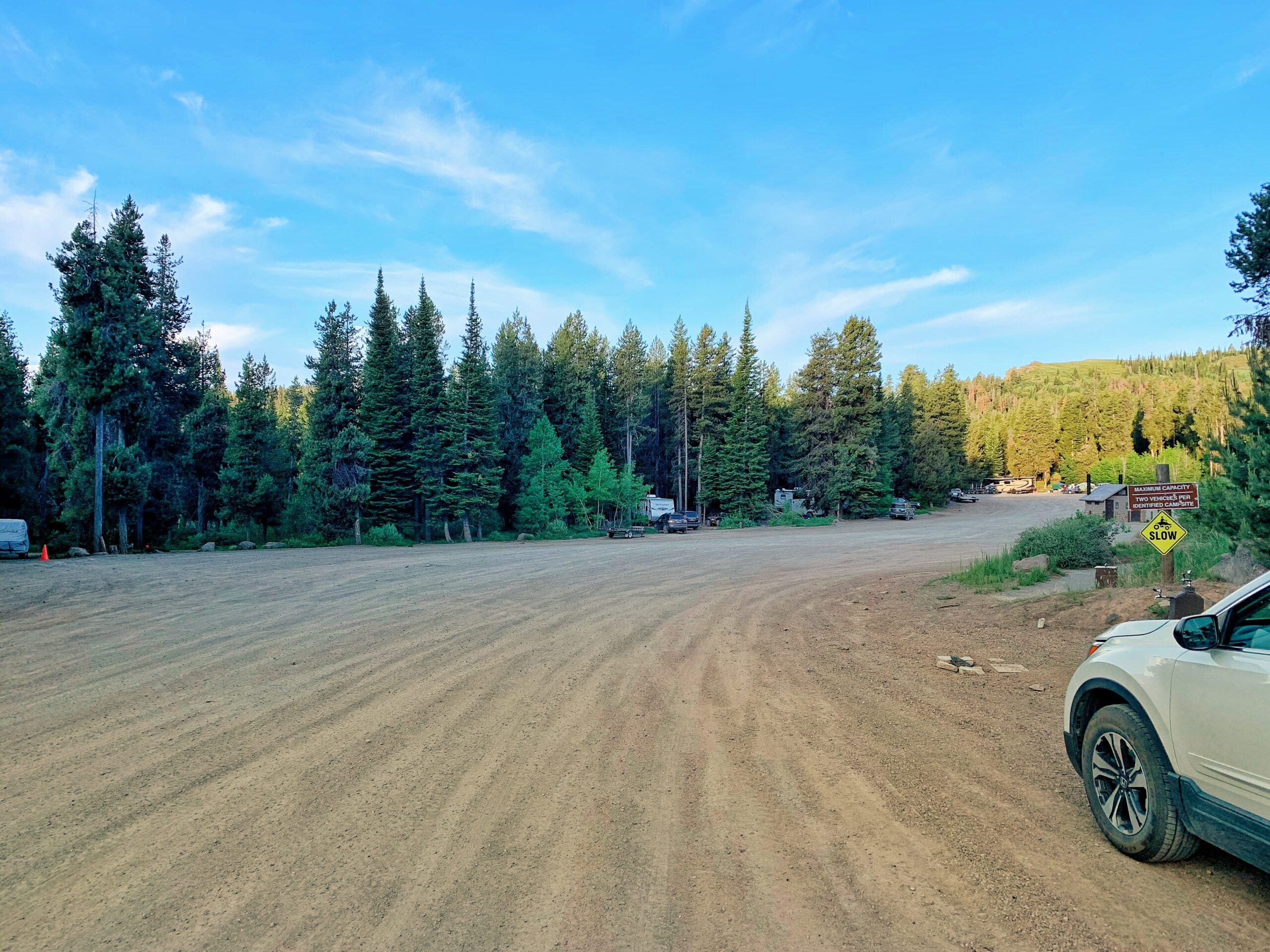 Even with an hour-long search for Gray Partridges, I was back at hour hotel by 9:00 am.

The part of Idaho I drove through this morning was beautiful.