Tympanuchus (from tympanon, kettle drum, and echein, to have) pallidicinctus (from pallidus, pale, and cinctus, belted, encircled—probably in reference to the barred feathers)

Lesser Prairie-Chickens can be found in Kansas, Oklahoma, Texas, New Mexico, and Colorado, although their numbers are dwindling and most (70%, probably) live in four counties in western Kansas. There are two ways to see them. Either drive a whole lot of back roads and hope to get lucky with a quick view of a running or flying bird, or visit a lek where the males when the males are performing their courtship dances. Most, if not all, the leks are on private or protected property, so the way to see a lek is to sign up for a tour. Which is what I did—or tried to do.

I signed up for a tour in 2020, but I managed to pick a date a week before everything shut down for Covid. I inquired about a tour in 2021, but was informed that the only available tours were for groups—not individuals—and the groups didn’t want anybody along who wasn’t part of their group, again because of Covid. This year, finally, I managed to sign up for the last spot on an open tour.

I drove to Oakley, Kansas on Saturday, birding and exploring on the way. On Sunday morning at 5:50 (4:50 Colorado time), Jim Millensifer, the tour leader, picked me up at my hotel. It turned out that three others on the tour had stayed at the same place.  Jim drove us south through the morning darkness, then headed west on a dirt road. He opened a gate beyond which was a rutted track. Another mile brought us to an old horse trailer parked in the middle of nowhere. Jim unlocked the door and let us in—then left us. He had to go back to the gate to pick up four other birders who had followed us in a car.

The four of us stranded in the trailer laughed at our situation. We had been picked up by a total stranger, driven to who-knows-where, told to get in an old trailer, and then abandoned. It felt like a scene from a horror movie.

Jim and others did return, and we all sat on a long bench that ran the length of the trailer. It was a chilly morning—around 45° with a bit of a breeze—but it could have been a lot worse. We stared into the darkness and waited and listened. Jim had told us we would hear the birds before we’d see them. We heard several Horned Larks and some distant Coyotes and Ring-necked Pheasants. A beautiful male Pronghorn wandered by, coming within about 30 yards of the trailer before hearing or smelling us and taking off. 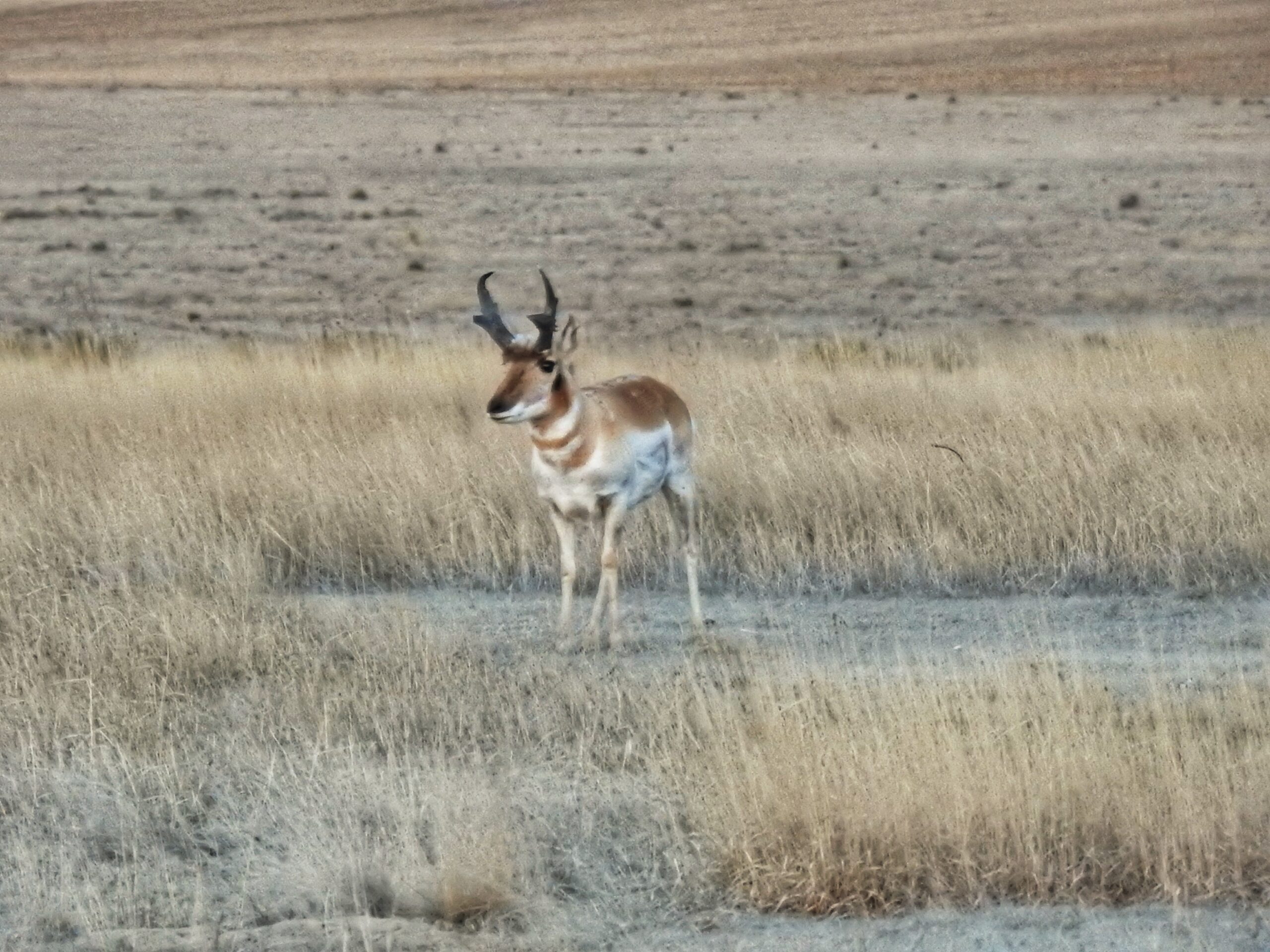 After about 20 minutes, we heard the prairie-chickens. The Lesser-Prairie chicken gives off a variety of gurgles and squawks as it dances, but the main call—when the males puff out their air sacs—is a short burbling. They expand their sacs and make the noise, they stomp their feet, they strut around, and they make little flutter-jumps—all to impress the ladies.

We had a bonus on the tour. Jim told us a Greater Prairie-Chicken had been joining the Lessers on the lek. This wasn’t a lifer for me—I’d seen a hen and chick run across a highway in Minnesota back in 1991—but that was a long time ago and, of course, I didn’t manage any photos.

Moments after the Lessers began calling, Jim pointed out the sound of the Greater. Although the birds look—and dance—very much alike, they sound very different. The Greater’s call, as it’s puffing out its air sacs, sounds like somebody blowing across the neck of an empty bottle. You can hear both species in the video and the difference will be obvious.

By this time, we could begin to see the birds. For the next hour, we sat spellbound as 9 male Lessers and 1 male Greater strutted their stuff. For much of the time, they were performing without an audience (apart from us), but two female Lessers showed up after a while and wandered around ignoring the males.

After about an hour, Jim made sure we’d all seen what we wanted to see and had gotten the photos we wanted to get. He took the first group back to the gate. As they exited the trailer, the prairie-chickens all took off. Before he got back, four or five of them had returned. As we left the trailer, three Lessers froze in place—not moving a feather.

Since the Lesser Prairie-Chicken was the lifer, I’ll start with photos of them. (I’m not going to post my photos in the order I took them. The bluer ones were taken before the sunrise.) 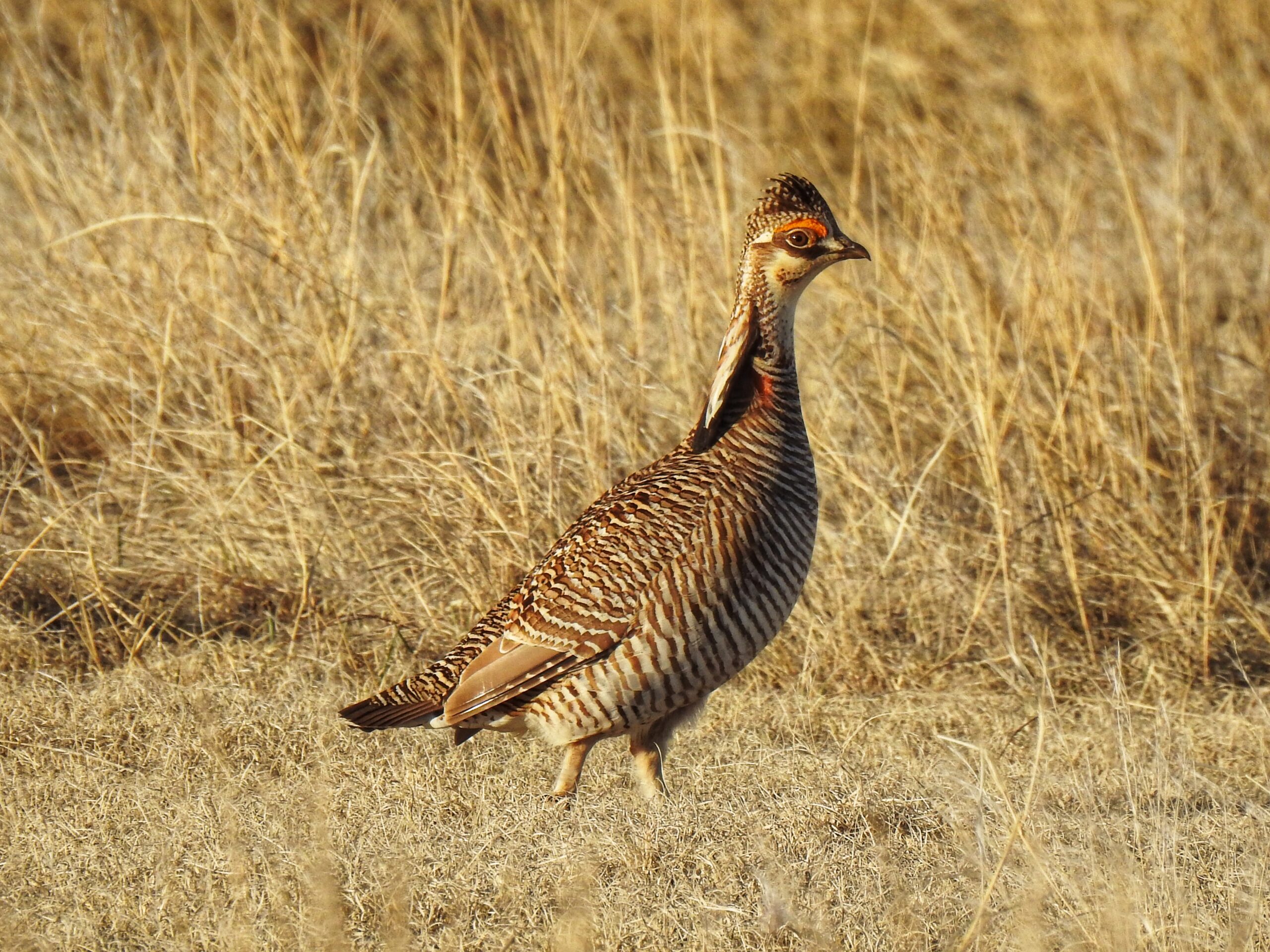 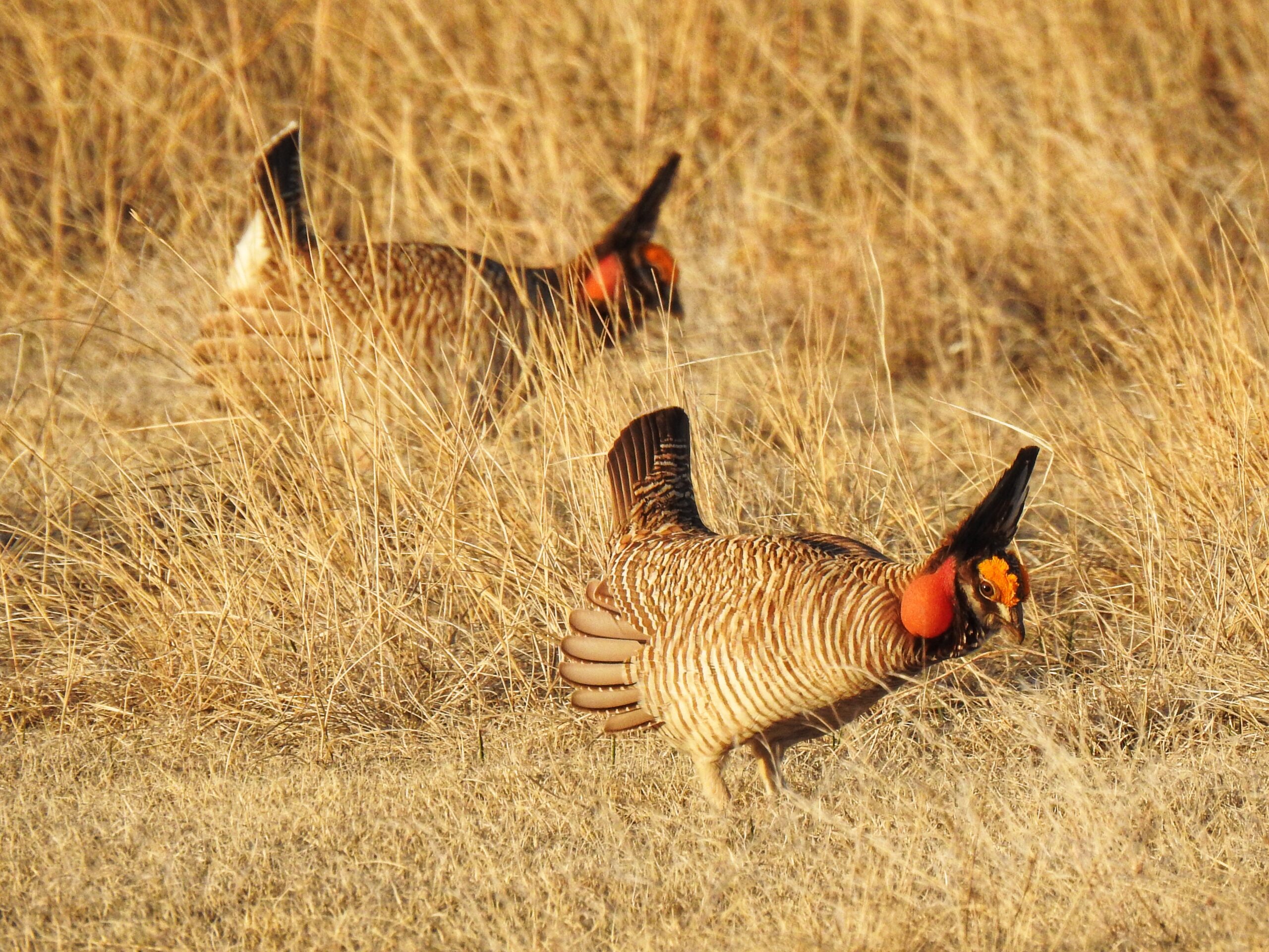 A male Lesser with a female in the background. The air sacs on the Lessers have a reddish-pink tinge. The sacs on the Greater are more orange/yellow. The barring on the belly of the Lesser is thinner—almost disappearing in the center of the belly. Lessers are also slightly smaller than Greaters, but this isn’t easily noticeable. 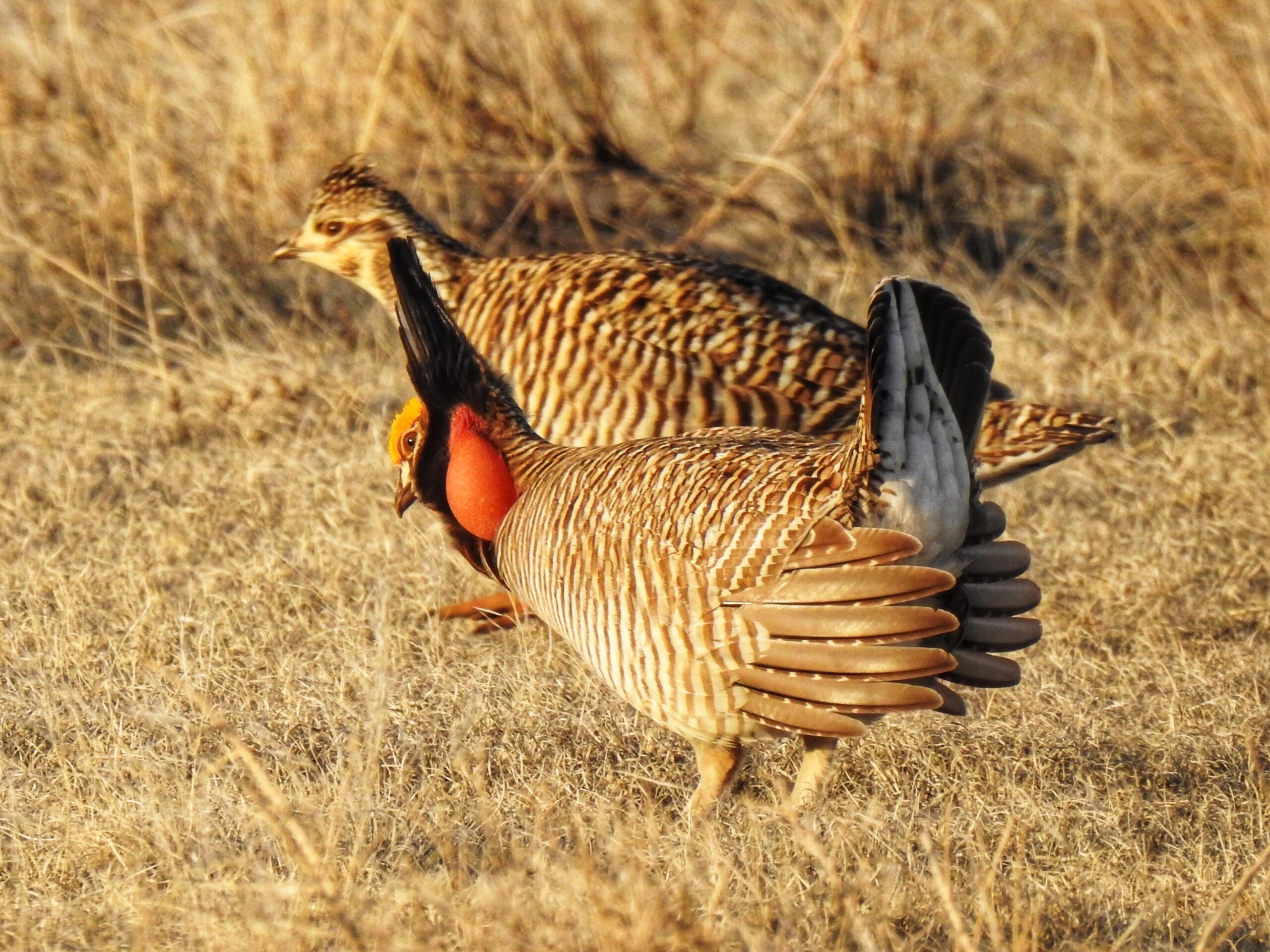 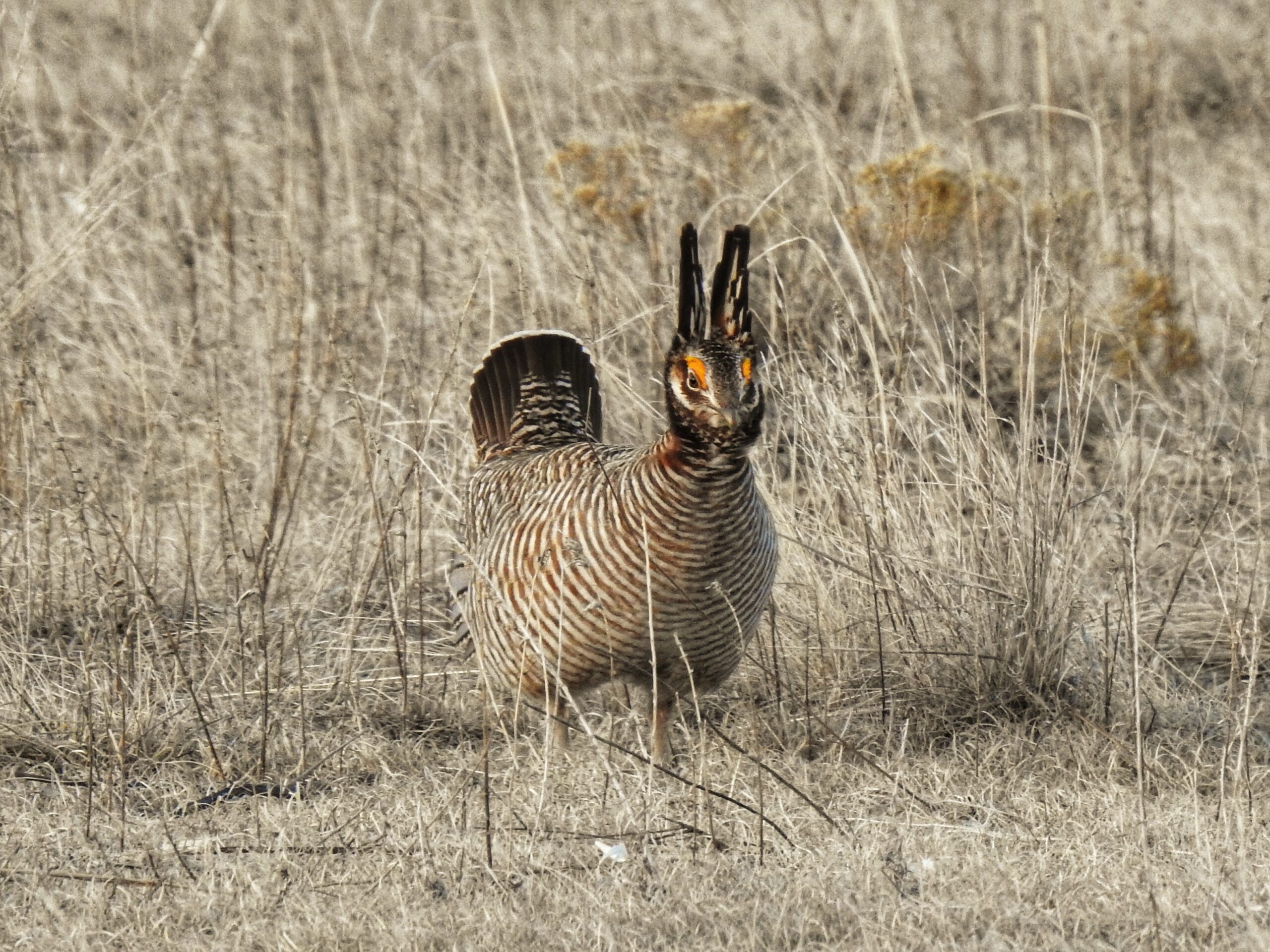 Two photos of a female Lesser with a male in the background. The pinnae on the neck of the female are much shorter than on the male. Those are the feathers that look like ears when the males raise them up. 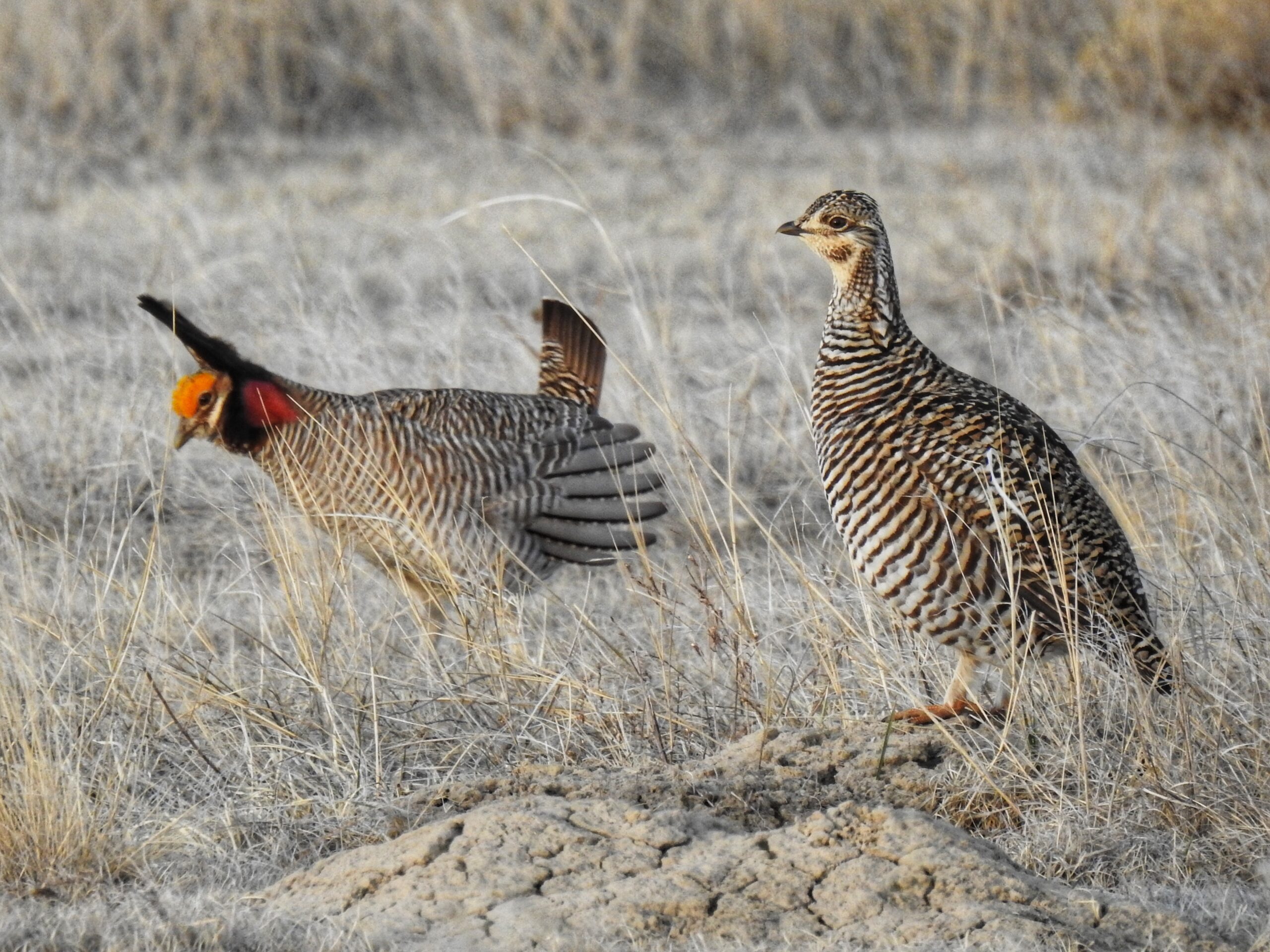 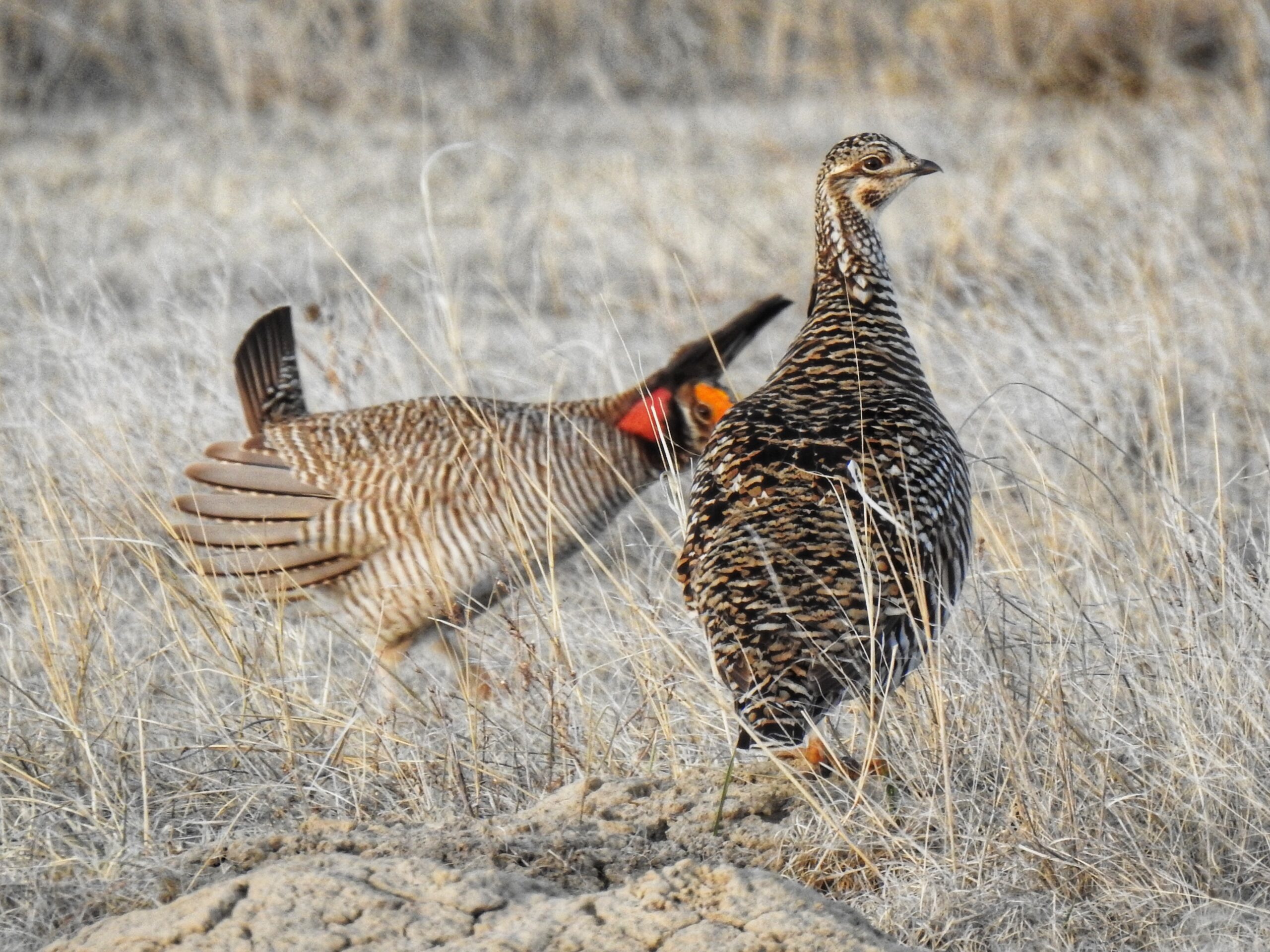 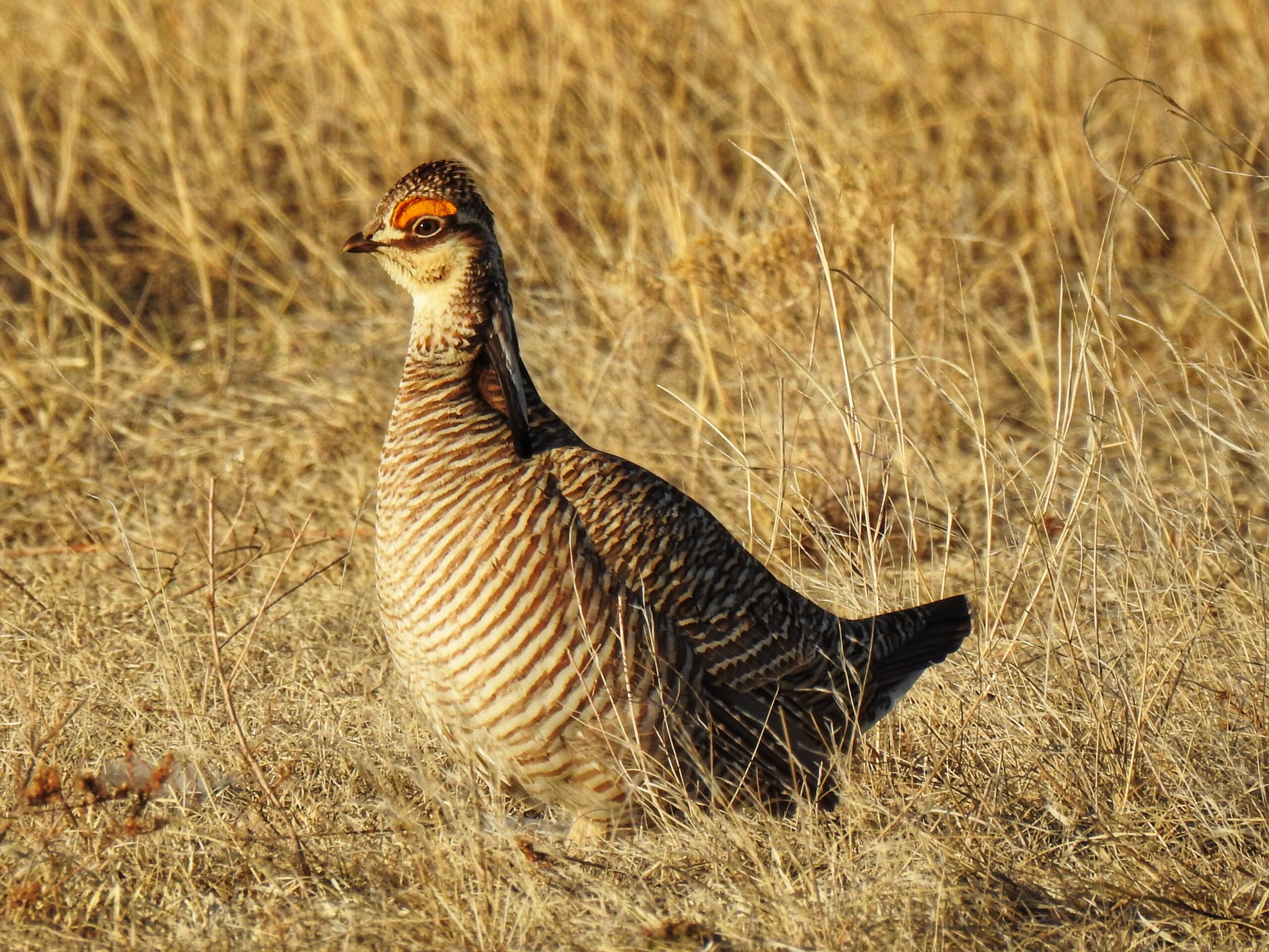 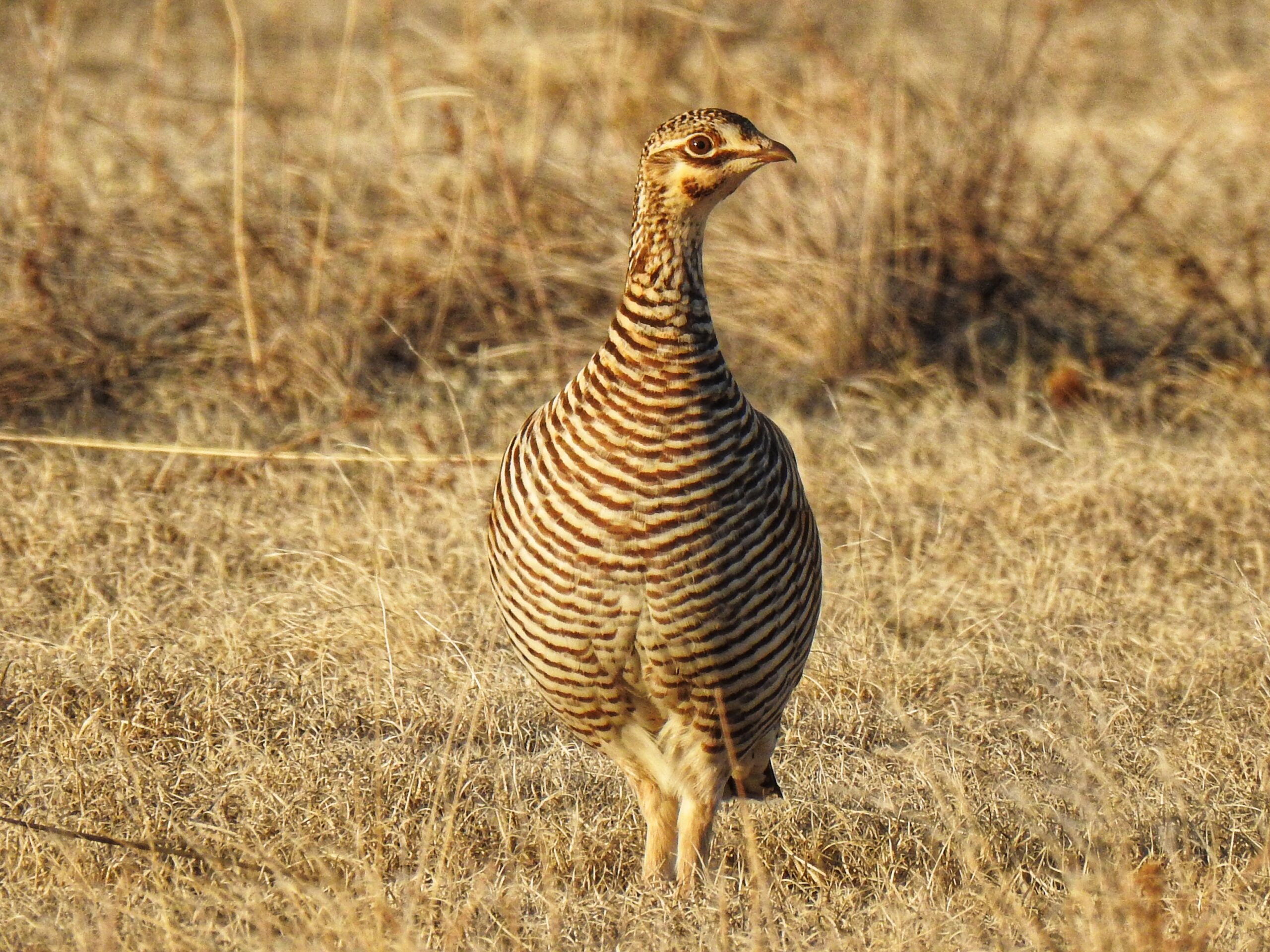 Another shot of a male Lesser being ignored by a female 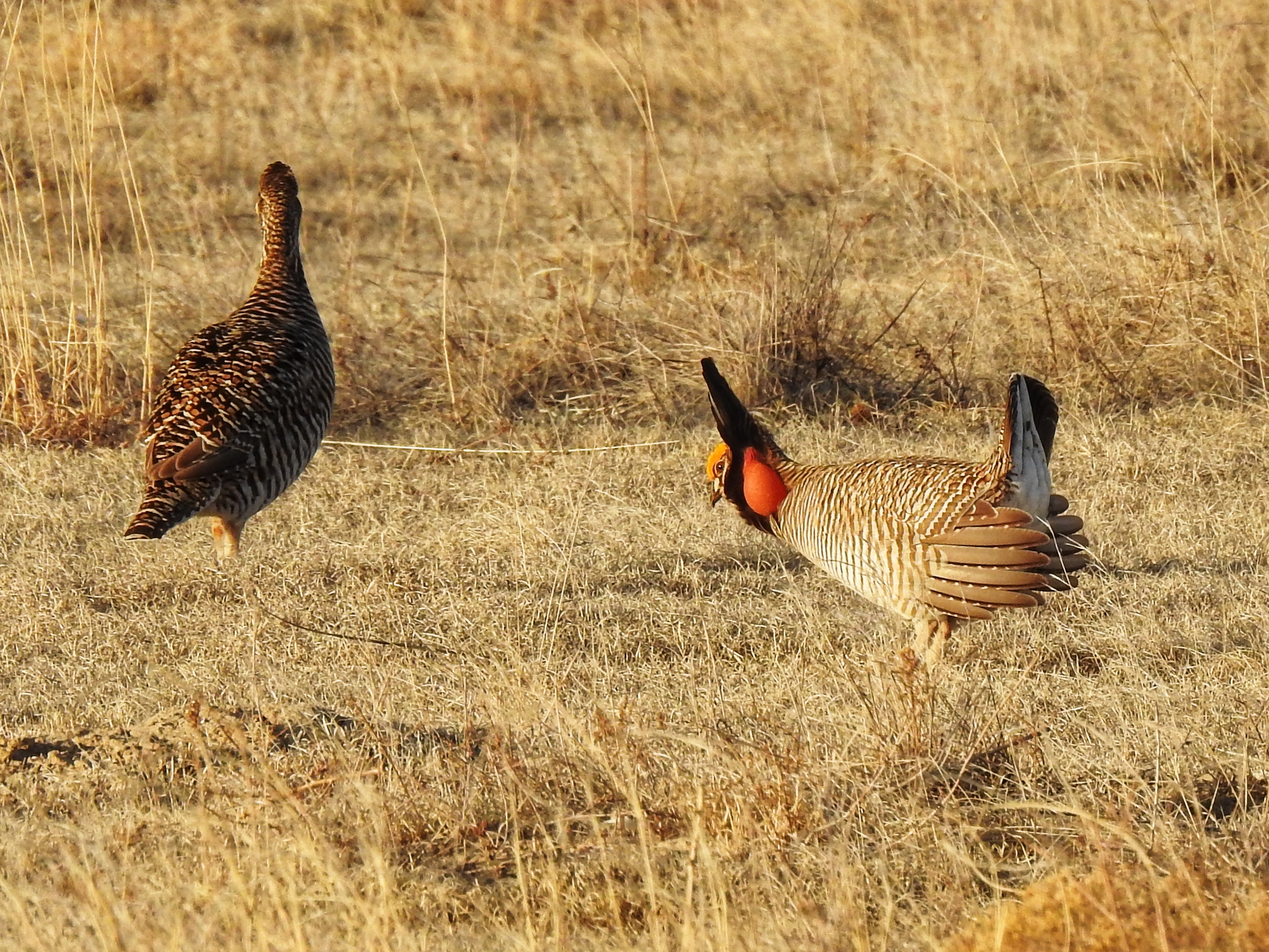 The Greater set up shop right in the middle of the lek, closest to the trailer, and defended his territory with vigor. Apart from the actual field marks, we could identify the Greater because he was missing a tail feather. Jim said there was one Greater on this lek last year that was also missing a feather, and he’s positive its the same bird. Greater and Lesser Prairie-Chicken ranges only overlap in a very small area in this part of Kansas. They occasionally hybridize. This guy didn’t act like he was aware he was in the wrong lek. 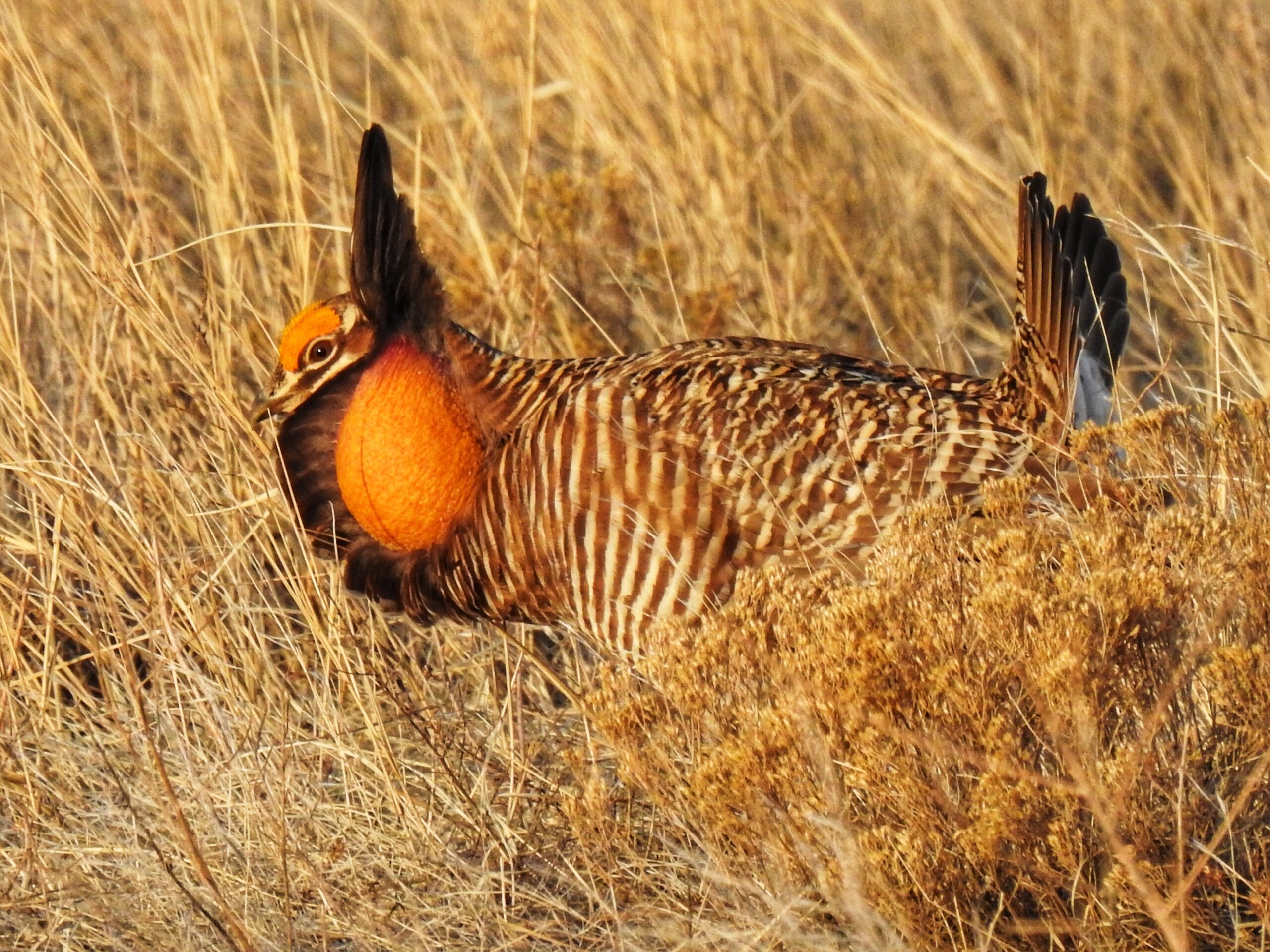 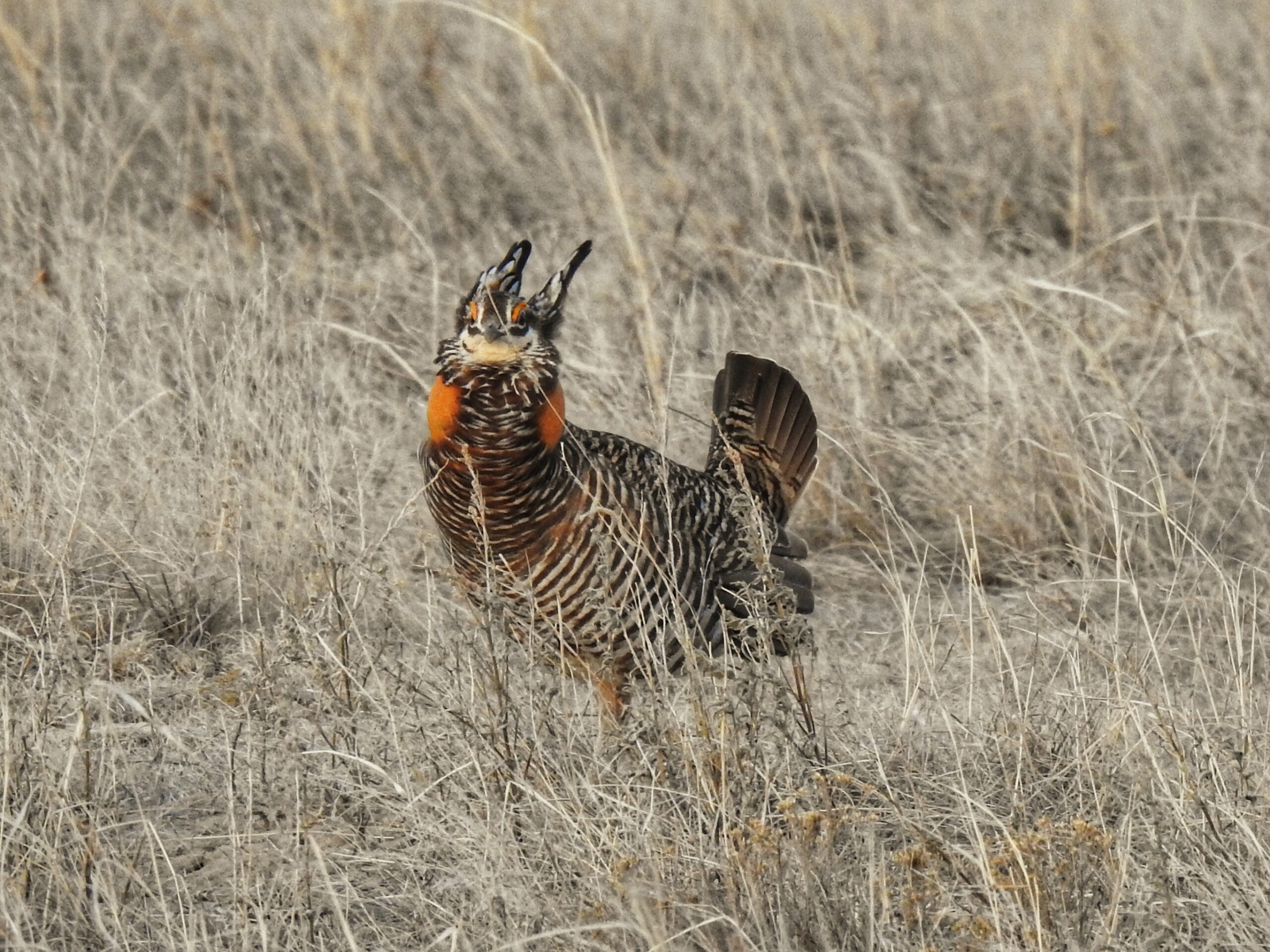 The male Greater in one of his few moments of repose. You can see the darker, thicker barring on his belly. 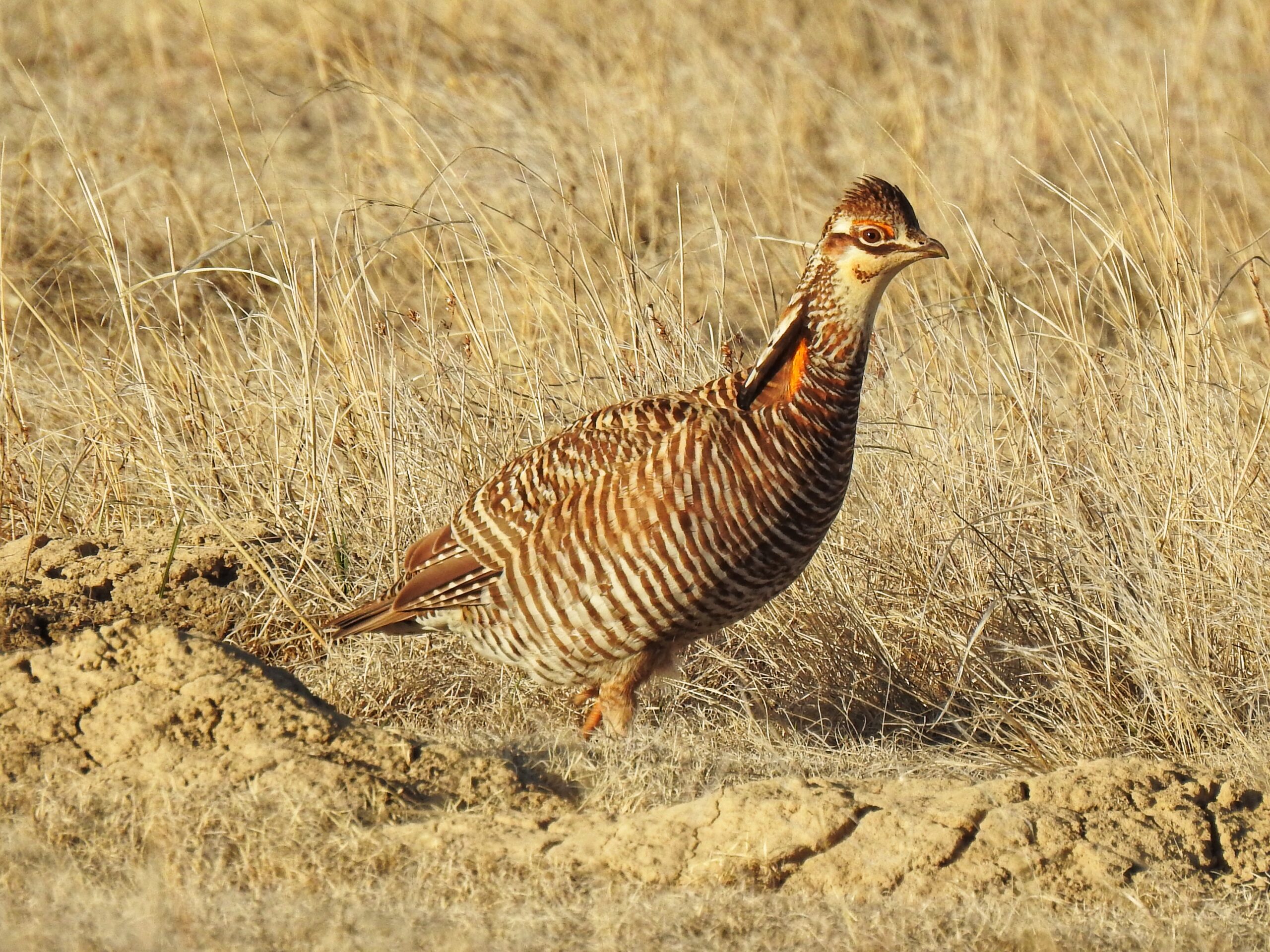 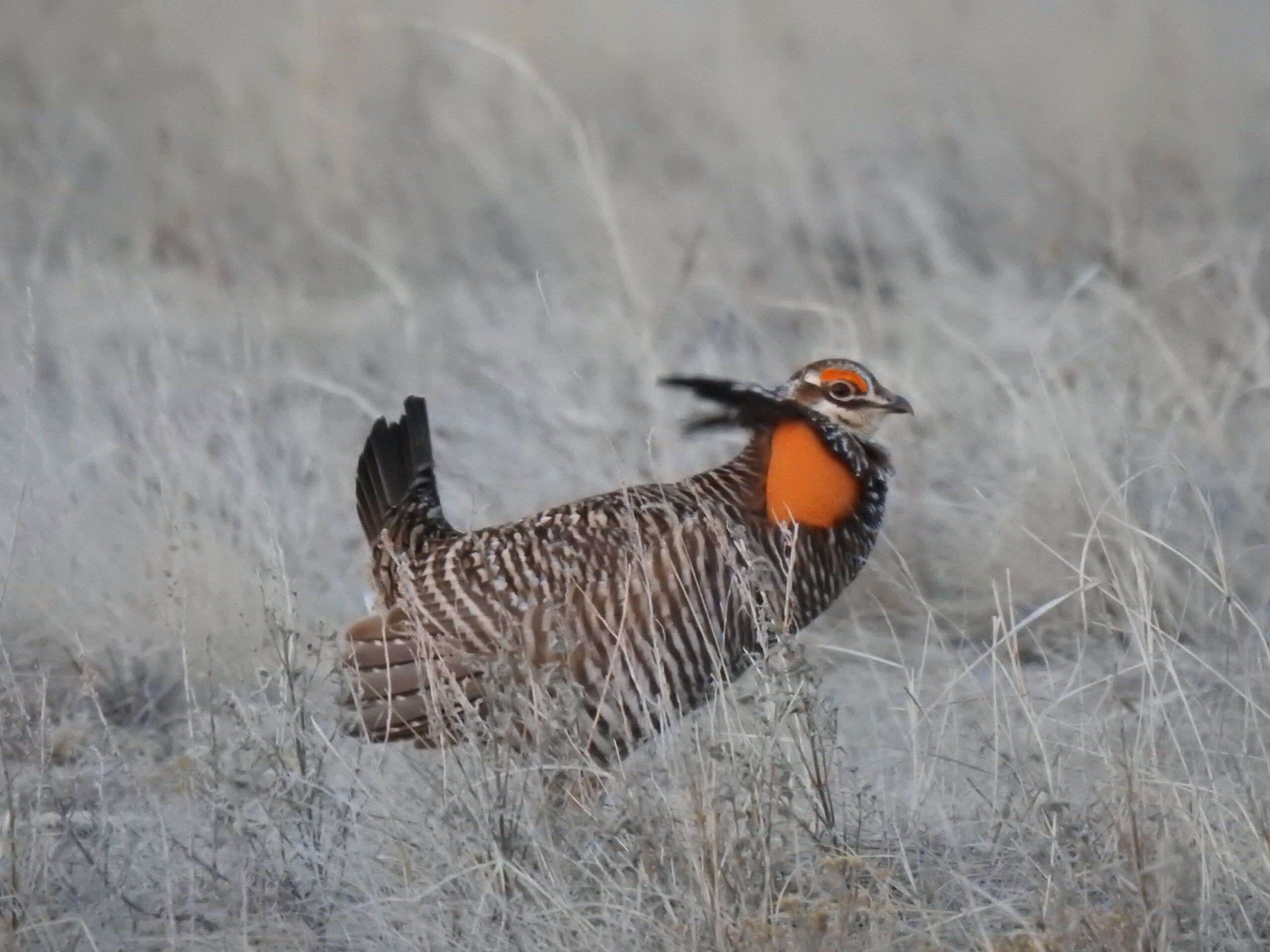 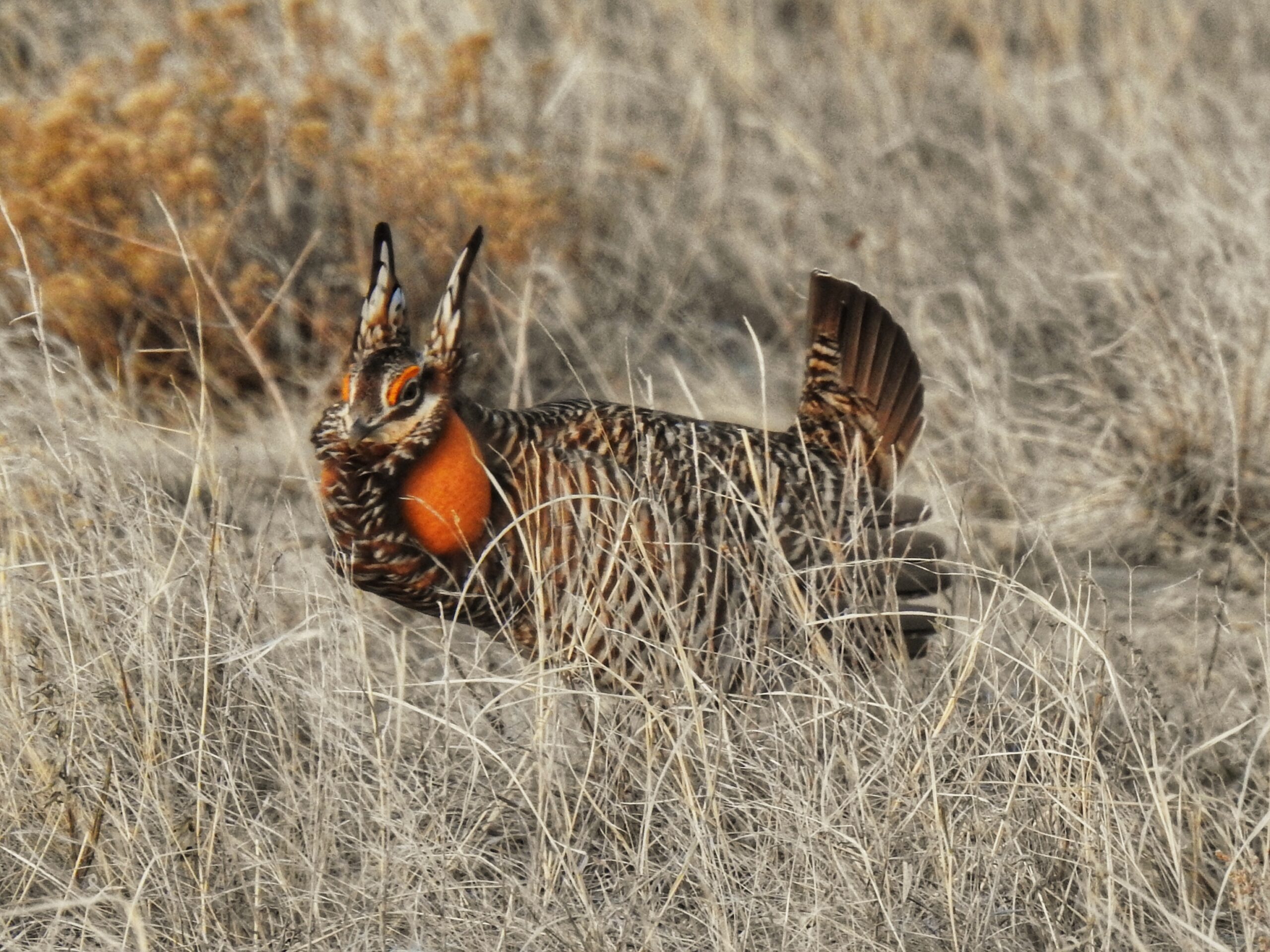 Most of my attempts capturing the flutter-hops came out too blurry to post, but I got lucky with this one of the Greater. 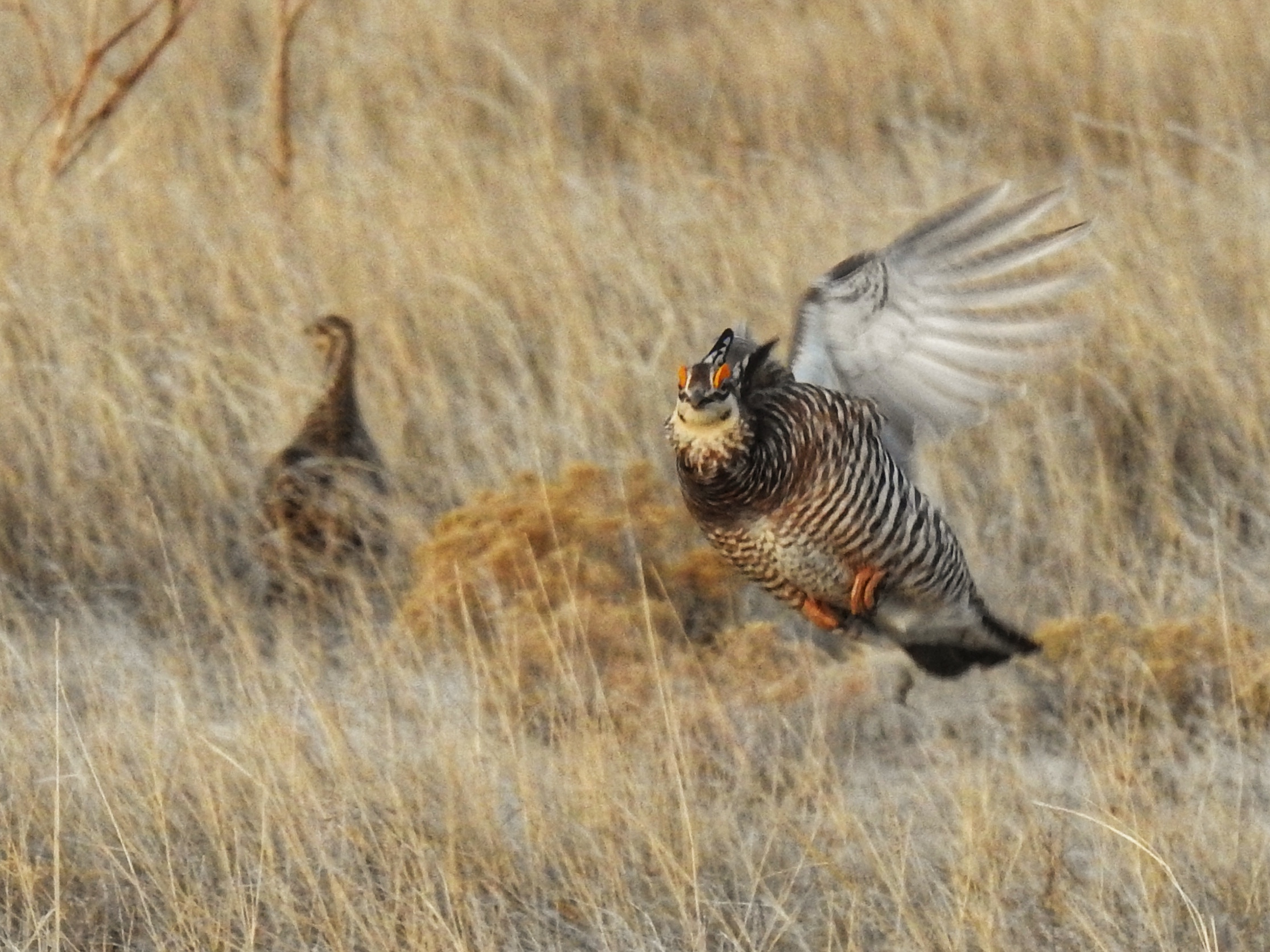 It seemed like the territorial dance stage of the Greater and one of the Lessers was marked by a dried cow pie. The two birds were constantly facing off right next to it. Most of the time, the confrontation consisted of both birds crouching down and staring at each other. Occasionally they would jump around and flap their wings. I never saw actually physical fighting like I did with the Greater Sage-Grouse last spring. The Greater is on the right in this photo. 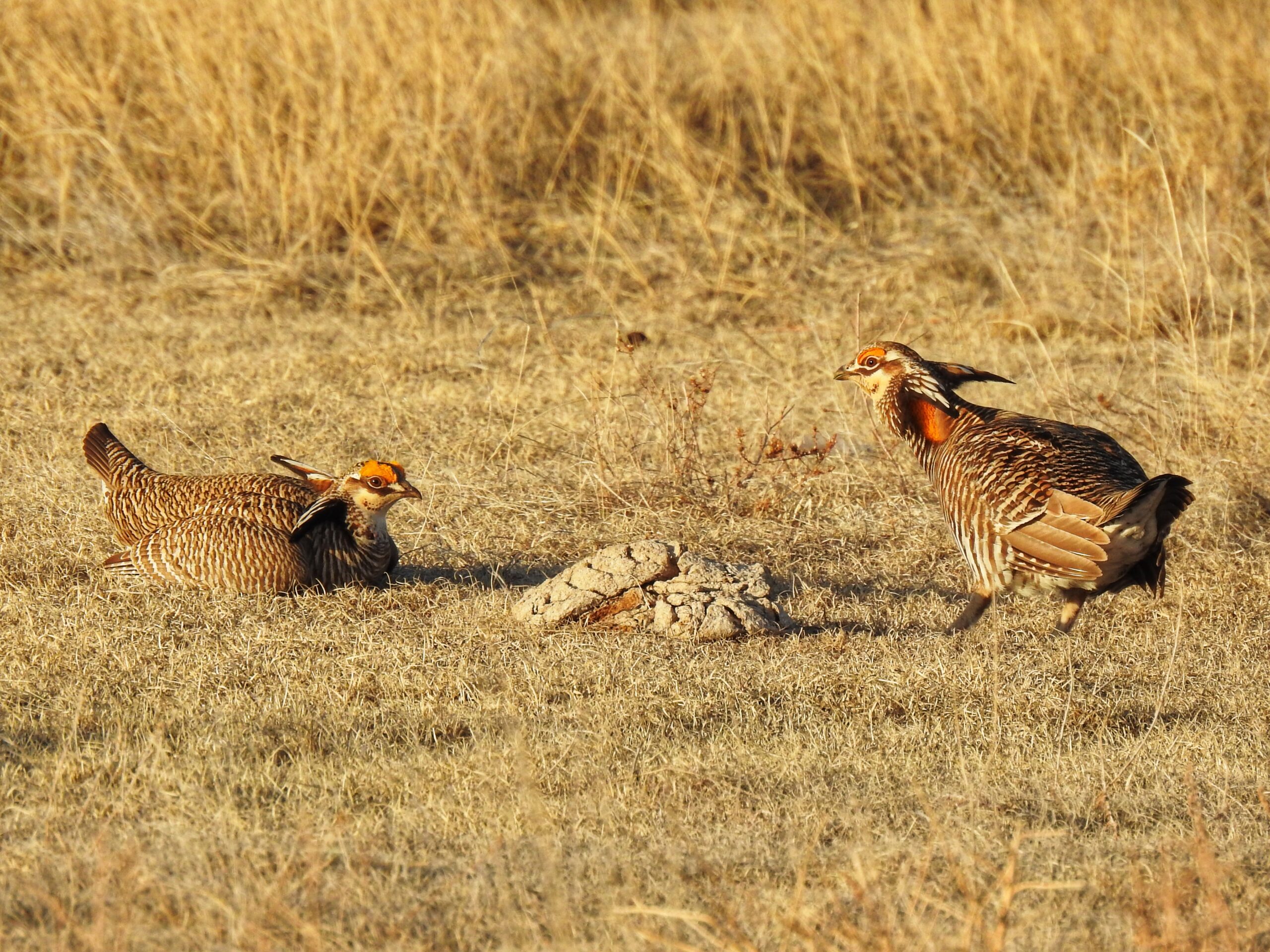 The Greater is on the right. A Lesser male is on the left. And a Lesser female is between them, ignoring both. Typical. 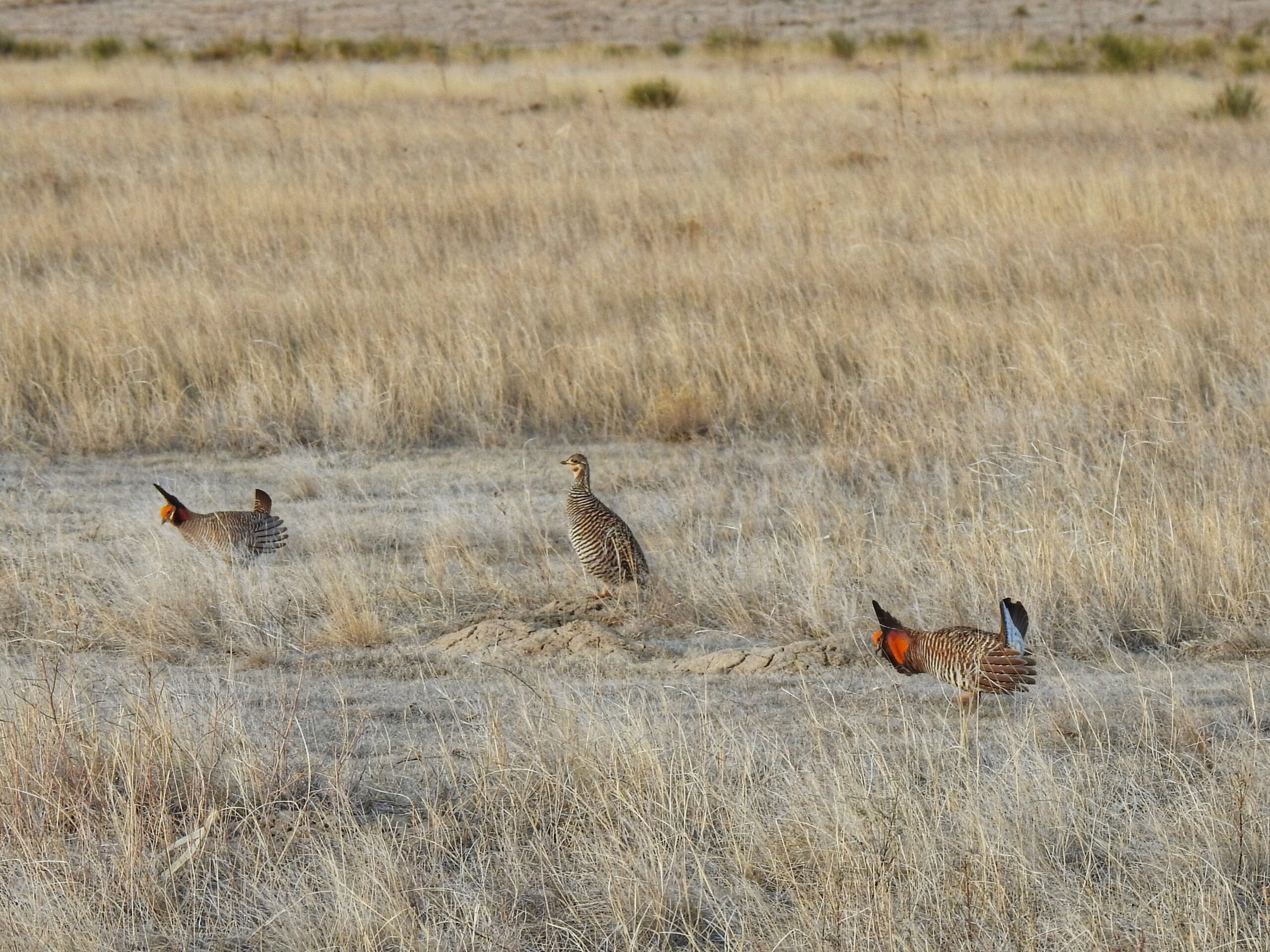 Again the Greater is in front, with three Lesser behind. 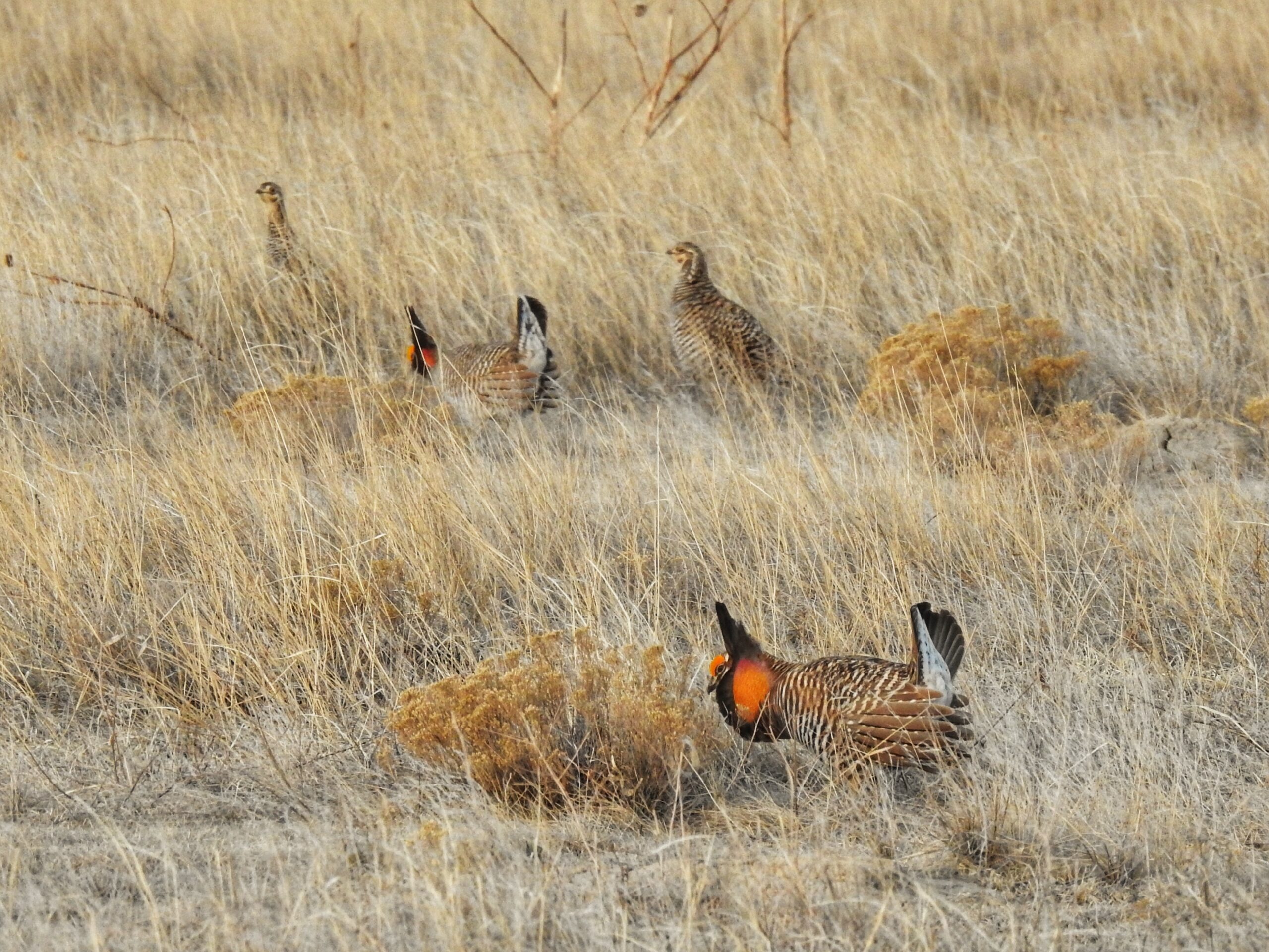 Two shots of them flying when Jim and the first group left the trailer. 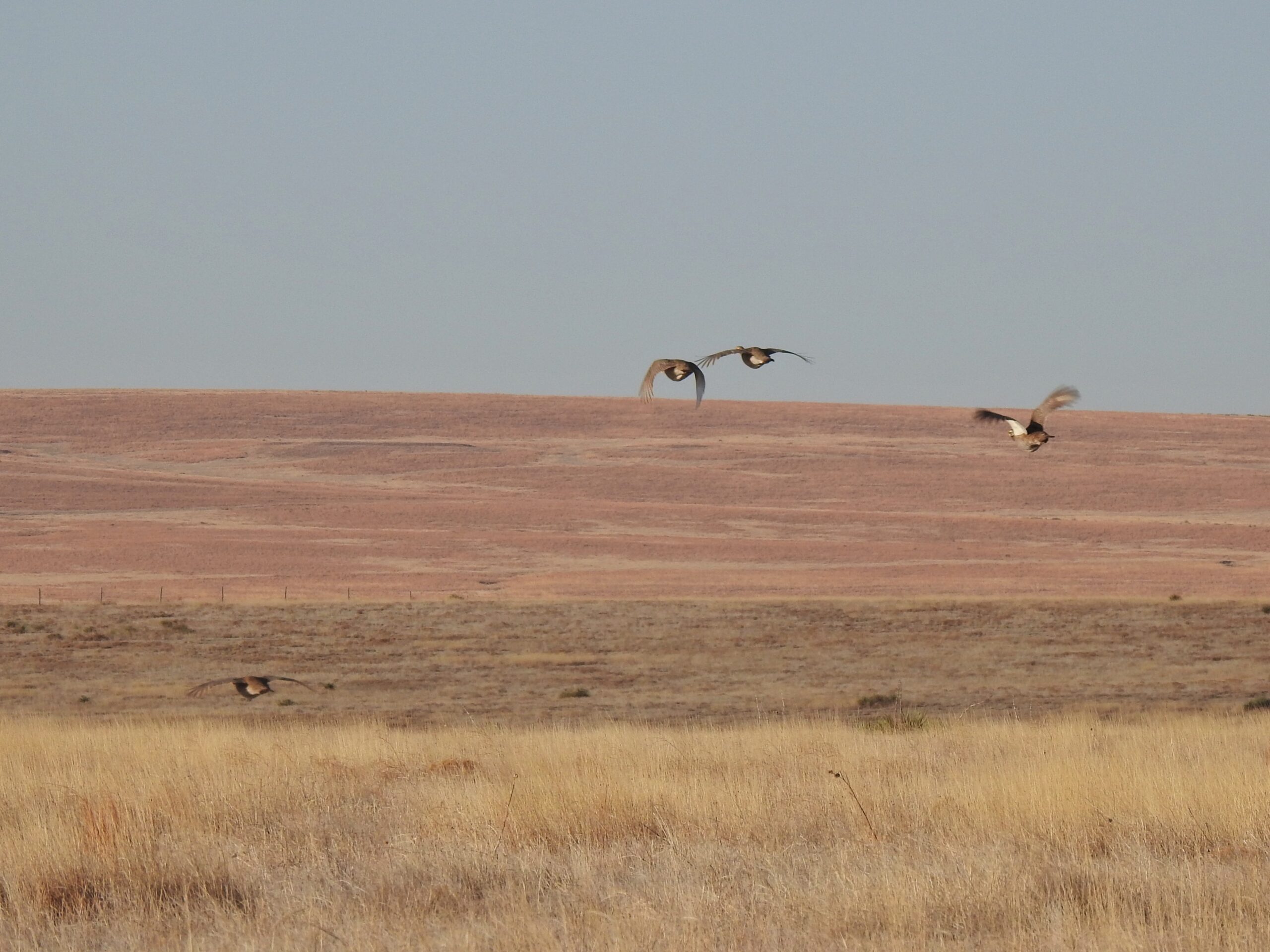 In this one, you can see how the Greater (right) is darker than the Lessers. 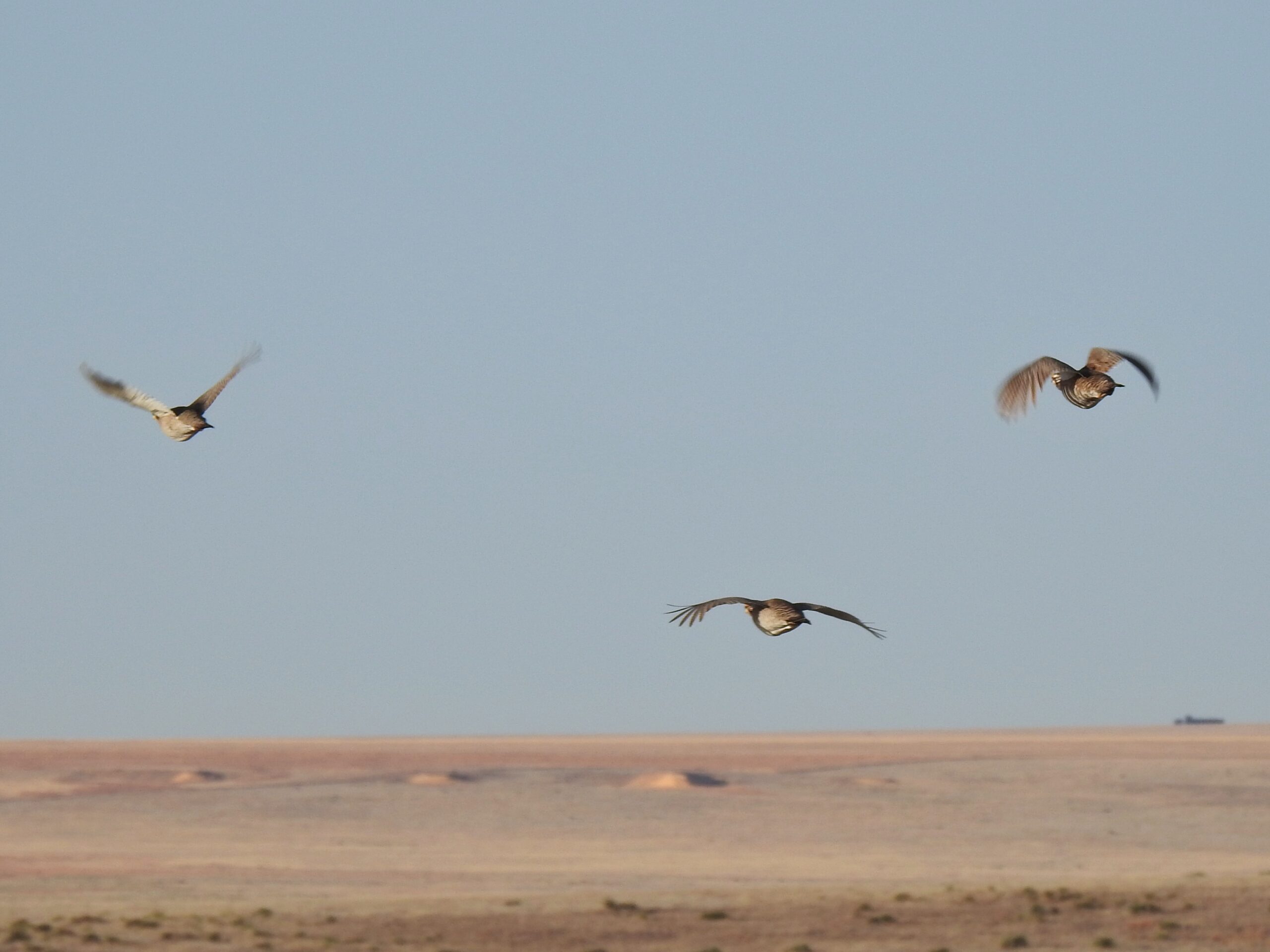 Here’s the view of most of the lek. The Prairie-Chickens appear as small dots in the middle-distance. They were as close as 20 yards from the trailer.

A Horned Lark showed up just as we were leaving. 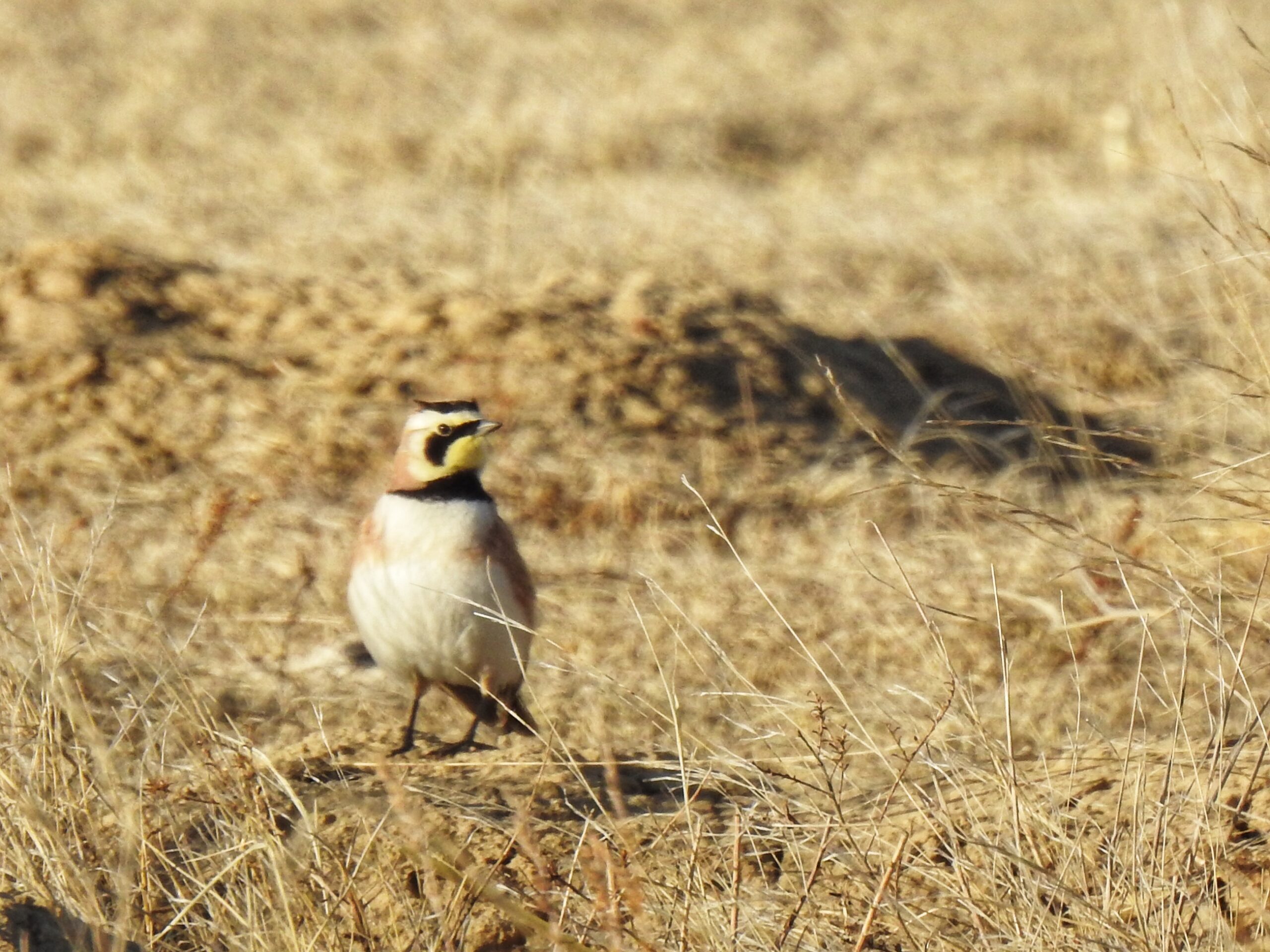 And the trailer. Jim is closing the door on the right. 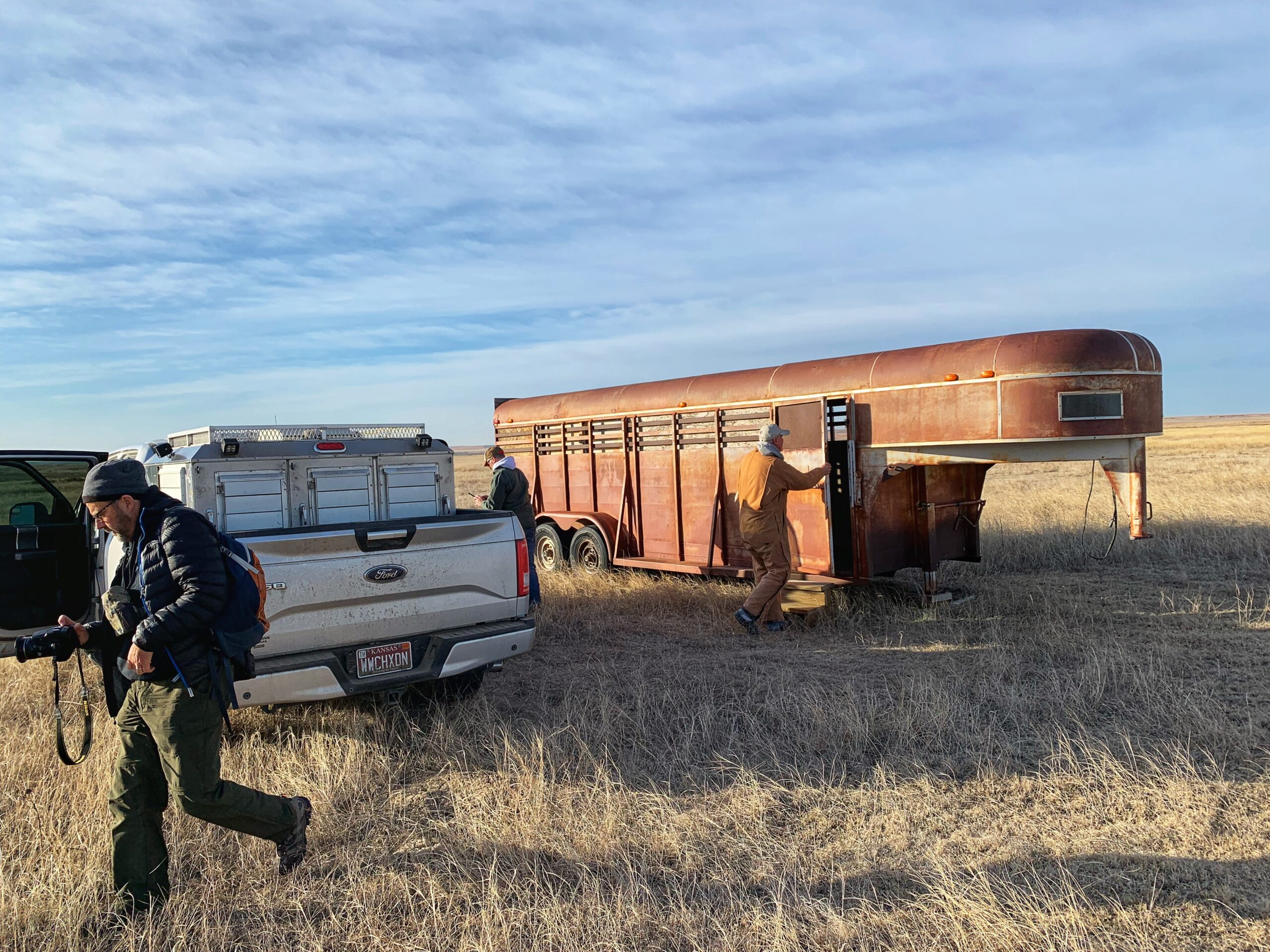 On the drive back to the hotel, Jim told us that the Lesser Prairie-Chicken might be classified as endangered in the next year. If it is, nobody would be allowed to get as close to a lek as we did today. It would be more like the experience I had viewing the endangered Gunnison Sage-Grouse four years ago—where the lek was half a mile away and the birds were little dots. That would not have been nearly as enjoyable. At least this was one thing not messed up by Covid.