On Sunday, when I was on the way home from Kansas, a Slaty-backed Gull was found at a state park near Loveland, Colorado. I found out about it that night when it showed up on rare-bird reports. I thought about driving up Monday to see it, but Monday was rainy and windy. I decided to wait for better weather and to see if the gull stuck around. The weather on Tuesday was worse, and most people who looked for the gull didn’t find it. Nobody found it on Wednesday, when the winds were 70 mph at times. Thursday was forecast to be a pleasant day, but the gull hadn’t been reported in a couple days and four hours of driving for nothing didn’t sound exciting.

Instead, I headed down to Fountain Creek and wandered about. After a couple hours, I decided to complete my five miles of walking and then head home. How quickly things change. I checked the Colorado birding group and saw that the Slaty-backed Gull had been refound at a lake in an open space about six miles from where it was originally seen. I was two hours away, with the entire Colorado Springs and Denver metropolitan areas between me and it. But it was a lifer, and lifers are hard to come by these days. I headed north, curbing my urge to rush madly by repeating the mantra “It’s worth trying for, but not worth dying for.” I’m not sure where I came up with that, but I didn’t die, so it worked.

The Slaty-backed Gull isn’t just any lifer. It’s an Asian species that breeds along the east coast of that continent from Siberia down through Japan. It’s uncommon along the Alaskan coast and rare elsewhere in North America. This is only the fourth or fifth time one has been seen in Colorado. So this was likely my only chance to see one.

On the other hand, it’s a gull, my least-favorite category of bird. All the gulls are very similar, with difference between species coming down to the amount of black on a particular feather or two, the color of the ring around the eye, or some similar obscure point. Which wouldn’t be bad except that they’re often at scope distance and packed in close together in huge flocks so that it’s hard to see an entire bird, much less see the details of plumage. My strategy, which I employed to perfection today, is to let someone else pick through them and find the good ones, then look where they’re pointing. I’m guessing I would have missed the Slaty-backed Gull if I had come upon the flock by myself without prior warning that something rare was hiding in plain sight.

When I was half a mile away from the reservoir, I could already see a couple birders with scopes staring out at the lake, which was a good sign. I parked and walked as close to the water as I was allowed to get, which was probably 150 yards from the mud bar where 200 or so gulls were sleeping (visible on the right in this photo). The two birders (one of whom was the guy who first found the gull on Sunday) assured me the target bird was still around. 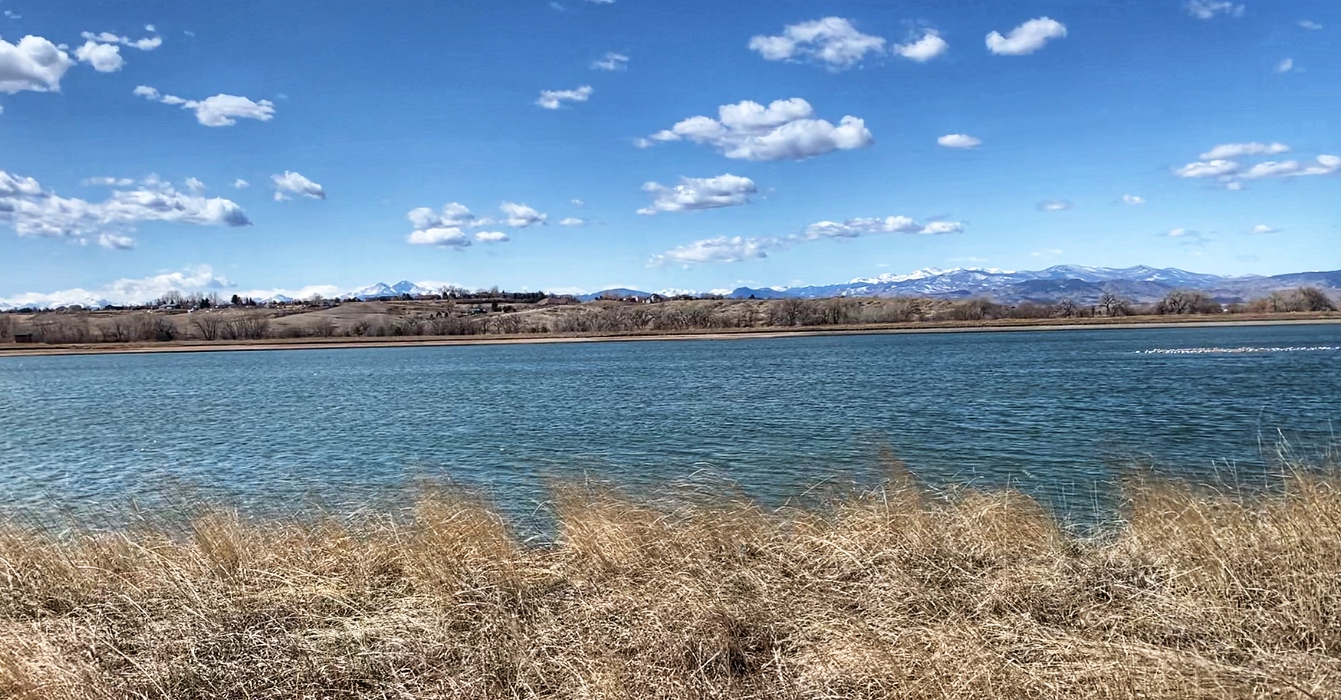 The Slaty-backed Gull was sleeping when I spotted it. It was larger than the Ring-billed Gulls that surrounded it, with a darker mantle. (That’s a Herring Gull on the left in the photo below, picking at its feet.) In addition, I could see that the Slaty-backed Gull had a blocky-shaped head and a dark smudge through its eye (a key mark). Two similar sized and colored Lesser-Black-backed Gulls were also in the flock. They were sleeping in a very similar position and showed almost no white on the black portion of the wing tip that showed. 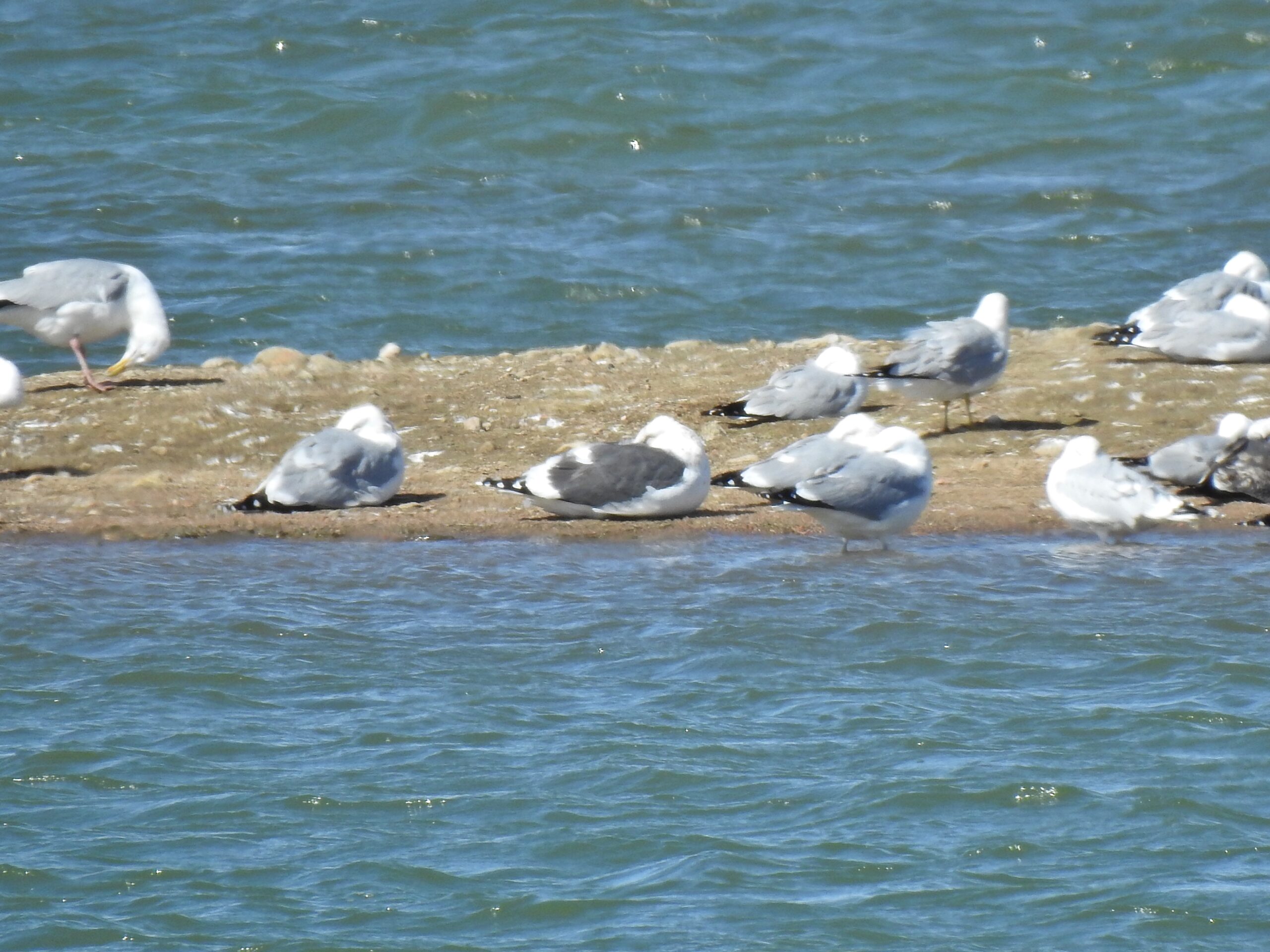 After perhaps 15 minutes, a hawk scared up the gulls. They all took off, drifted in the wind for maybe 30 seconds, then settled back down. The Slaty-backed landed on the far side of the island and stood just long enough for me to get one photo (below). I could see that the legs were a rather vivid pink and that it had a pinkish-red spot on its bill. When it took off, I could also see its wing pattern—a broad white trailing edge and a limited amount of black feathers near the tip—but I didn’t get a photo of it. 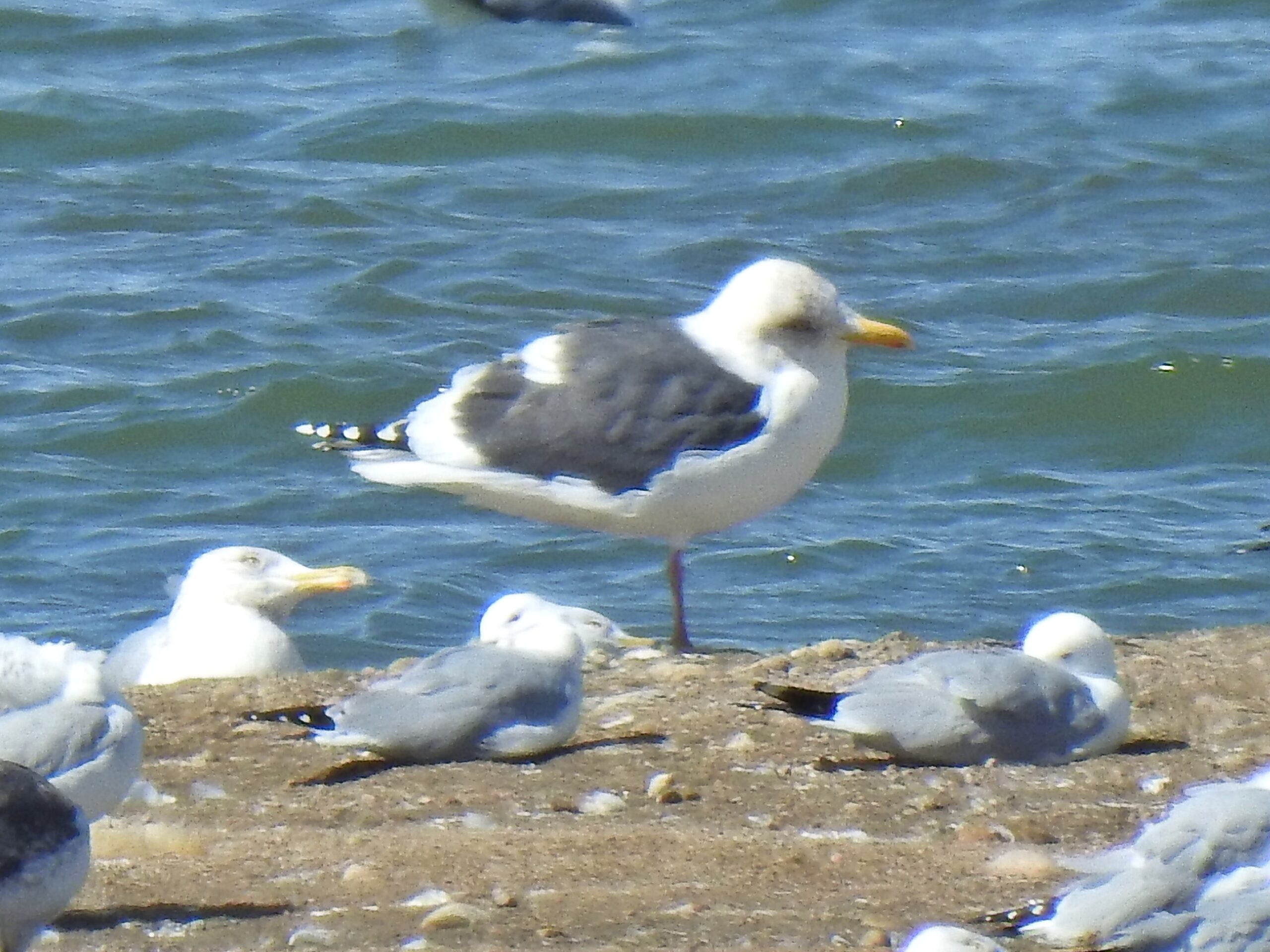 The gull then sat back down, tucked its head and didn’t move for 25 minutes or so. The two birders there when I arrived soon left, but others came. I heard at least two of them joke that they’d be sleeping too if they’d traveled all the way from Siberia.  We spent the time scoping the rest of the reservoir and comparing what we saw. Finally, the Slaty-backed Gull stood up. 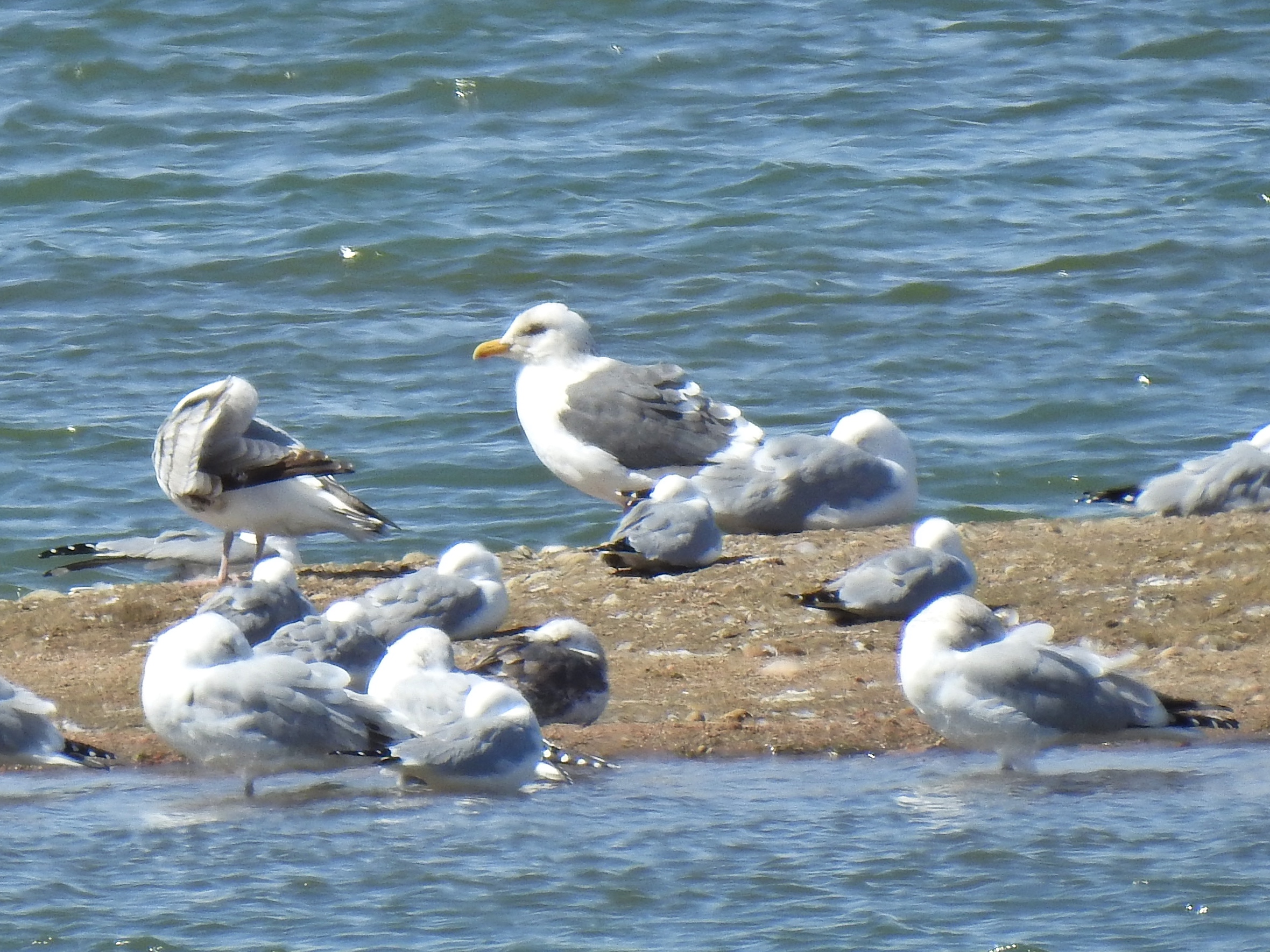 It acted a little indecisive—a few steps here, a few steps there, then walked slowly down to the edge of the island and swam out into the lake perhaps 40 feet from the island, then turned around and swam back. 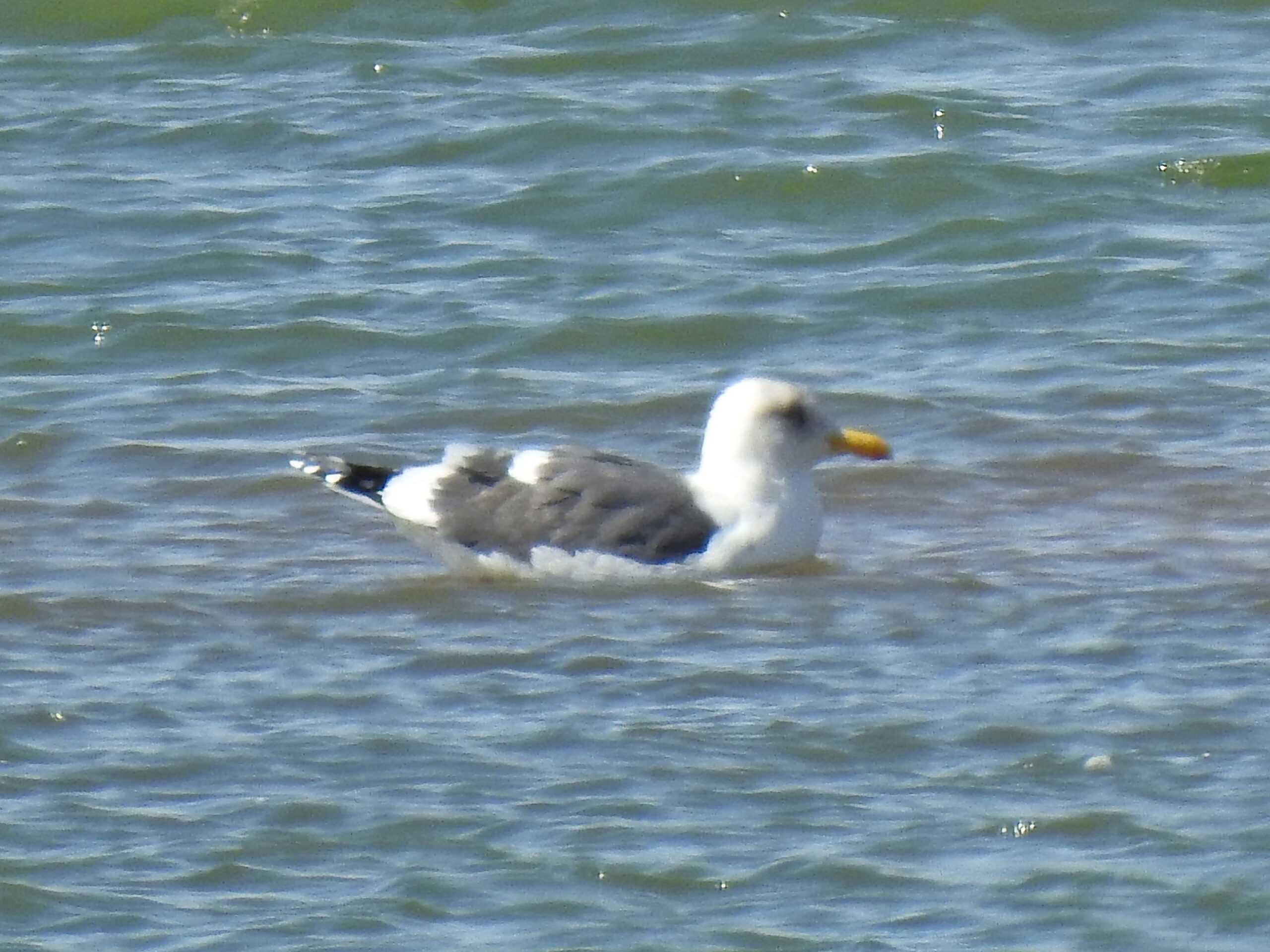 When it got to shallow water, it did a little preening and splashing. I was taking a video and managed to catch the few moments when it spread its wings. These next four shots are stills from the video. They’re fuzzy, but clear enough to show the limited black on the underwing and the “string of pearls” effect of the white spots near the tips of the wings. 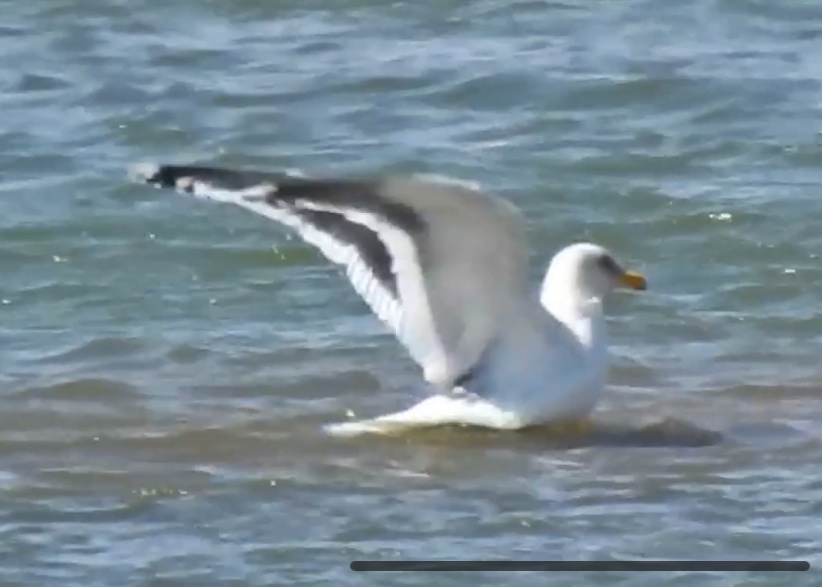 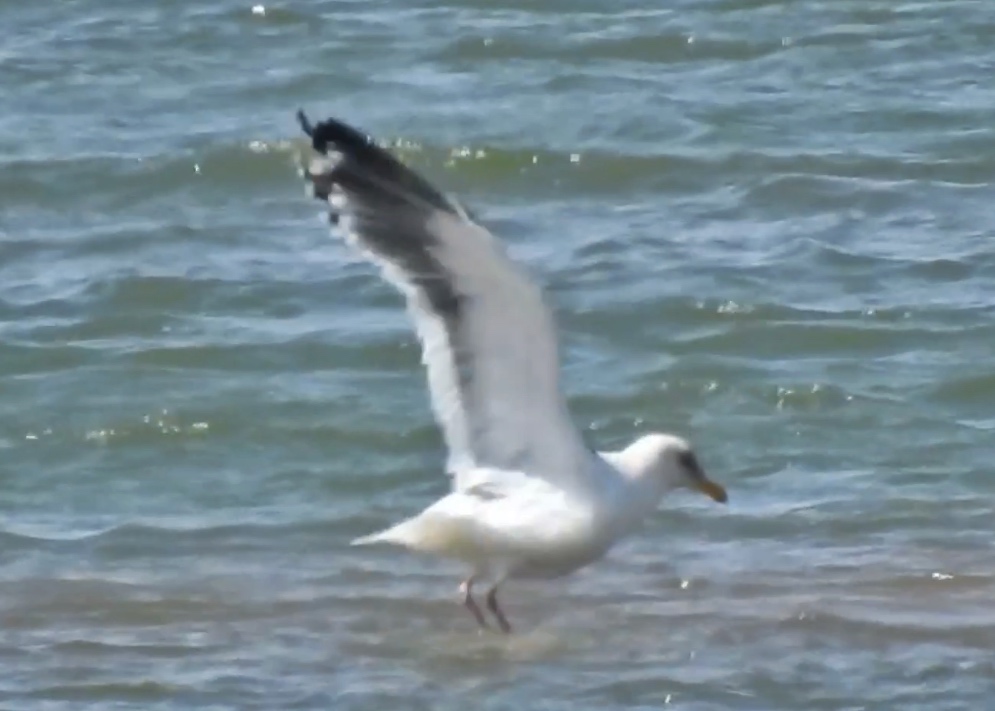 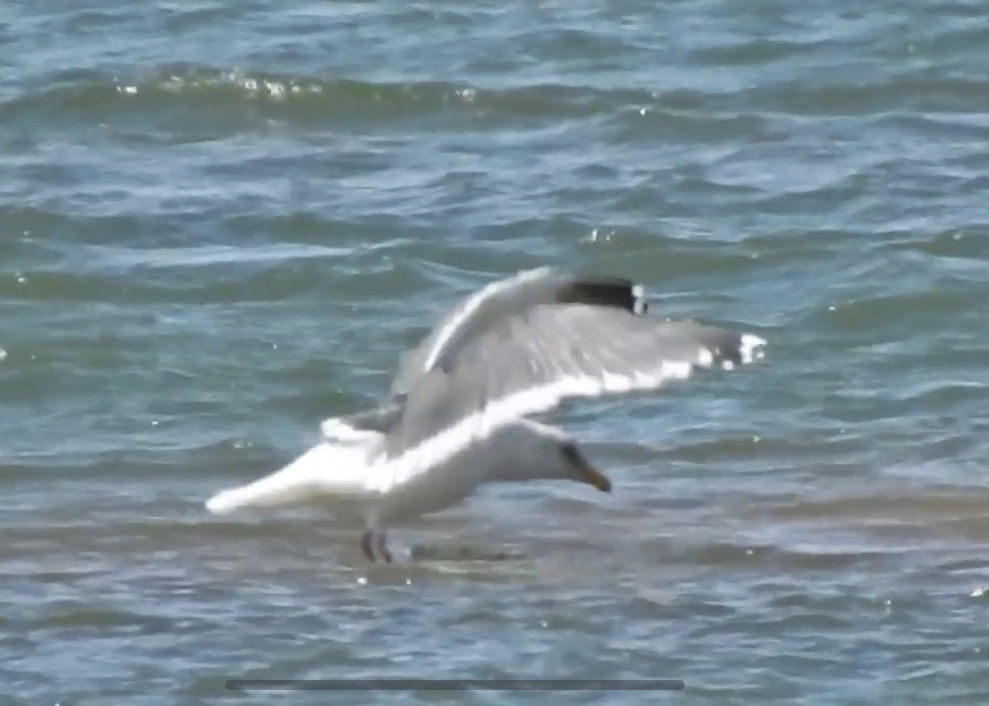 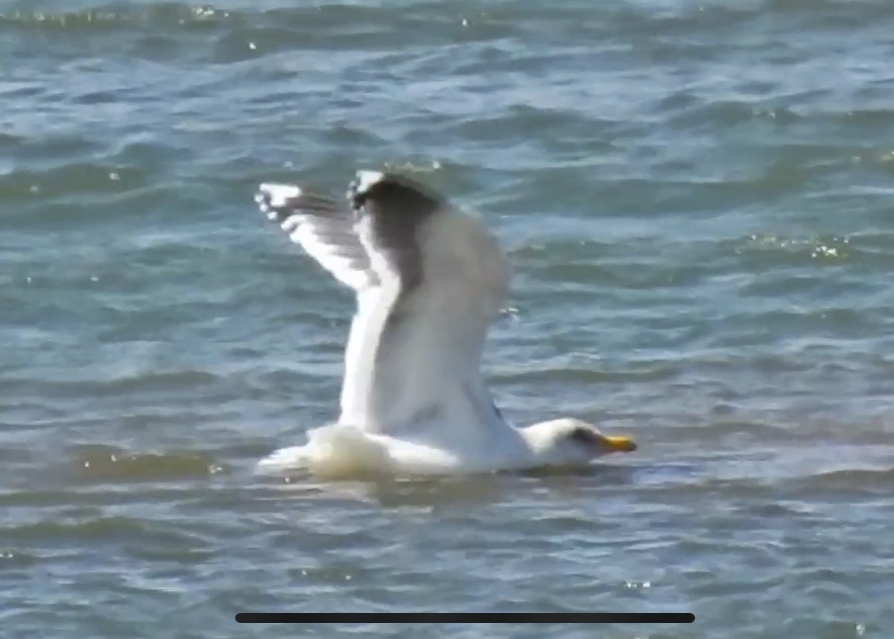 The gull stood in shallow water and looked around and did a little more preening. 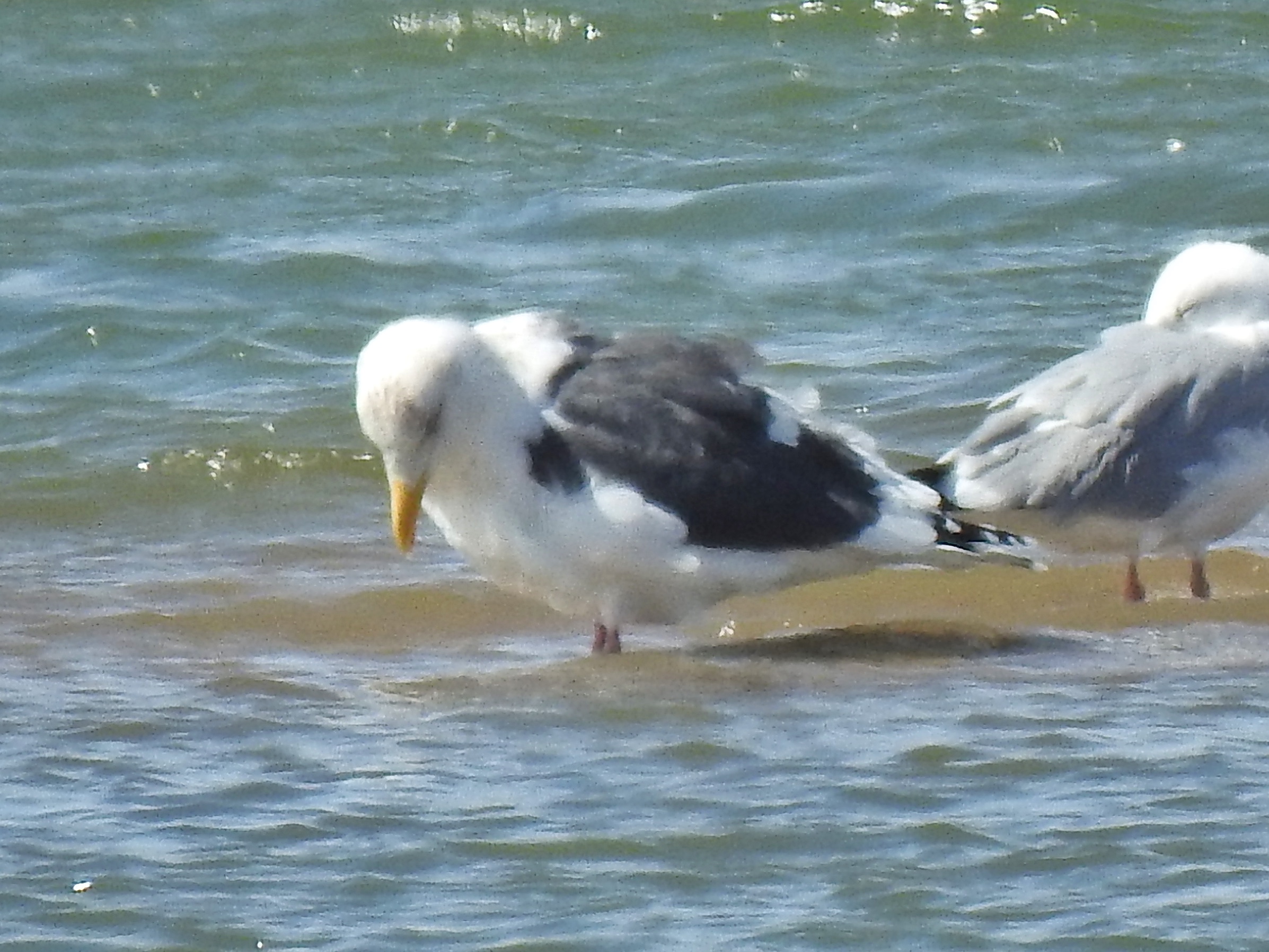 This is the best shot I got of the pink legs, the eye smudge, and the yellow bill with the pinkish spot. The Slaty-backed Gull is also described as “pot-bellied,” and that shows up in these photos. 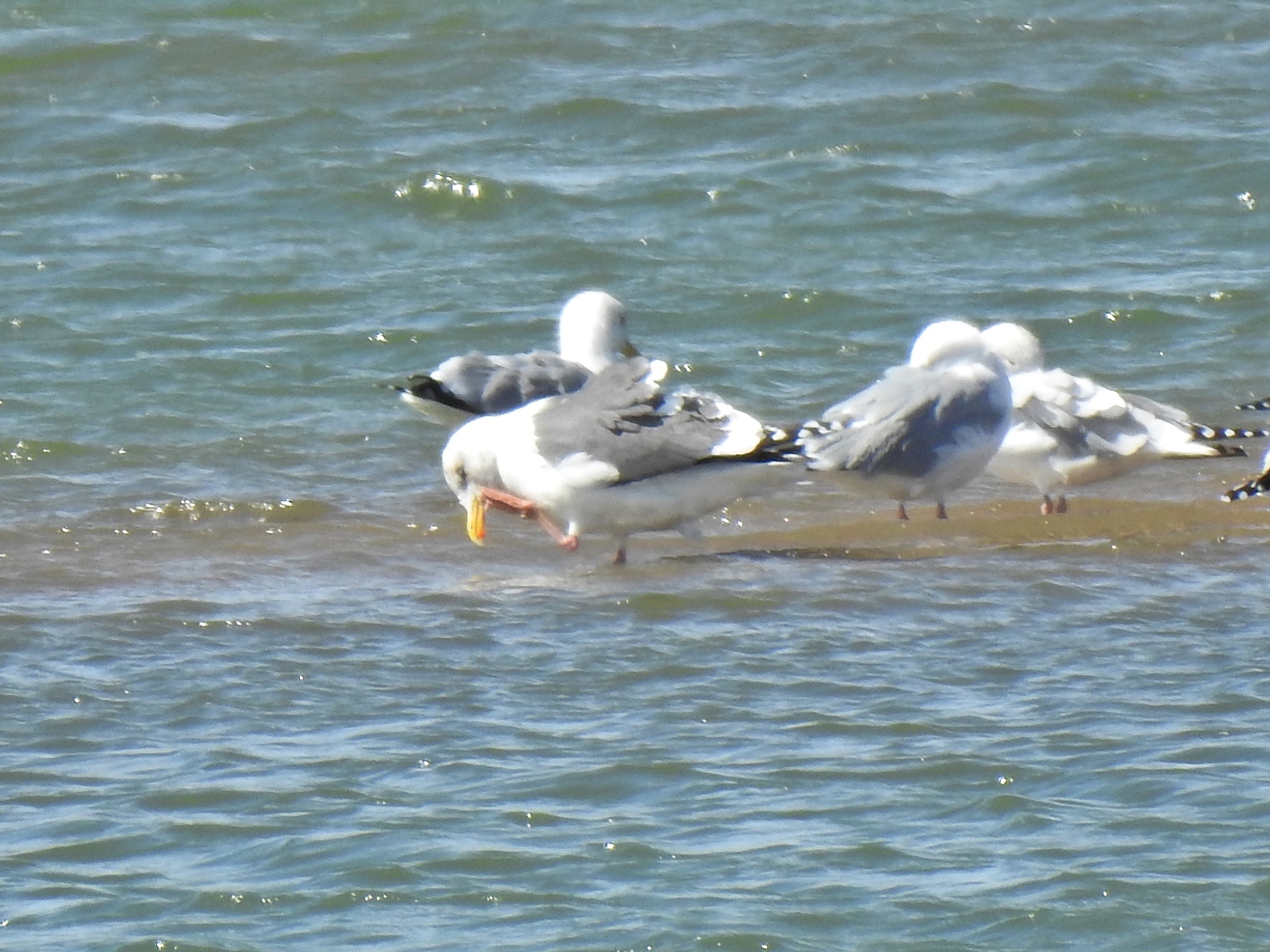 While still standing in the water, the gull tucked its head into its wing again. I decided I’d seen what I needed to see, so I left. I saw reports later that said the bird left about 20 minutes after I did and wasn’t seen again at that location again on Thursday. It was found in subsequent days back at the original lake and at one other location. But from what I hear, it was a lot closer to the viewers here, and the weather was a lot better.