The Elegant Trogon was on my “really want to see” list for this trip. As I sat on the porch at Cave Creek Ranch watching the feeders, I grabbed the opportunity to ask a couple birders where I’d be most likely to see one. They said they were seen daily along the South Fork of Cave Creek, about five miles from where we sat. They said the birds were most active beginning around 8:00 am when the sun finally got down into the canyon, but that they were sometimes heard and seen earlier. One guy said he and his wife had see a pair by a hole in a tree just that morning.

I still hadn’t figured out that Arizona doesn’t observe Daylight Savings Time, so I got to South Fork road the next morning around 6:00. I had to place to myself for the first half hour. It was certainly one of the prettier places I’ve birded, but there weren’t a lot of birds around yet. 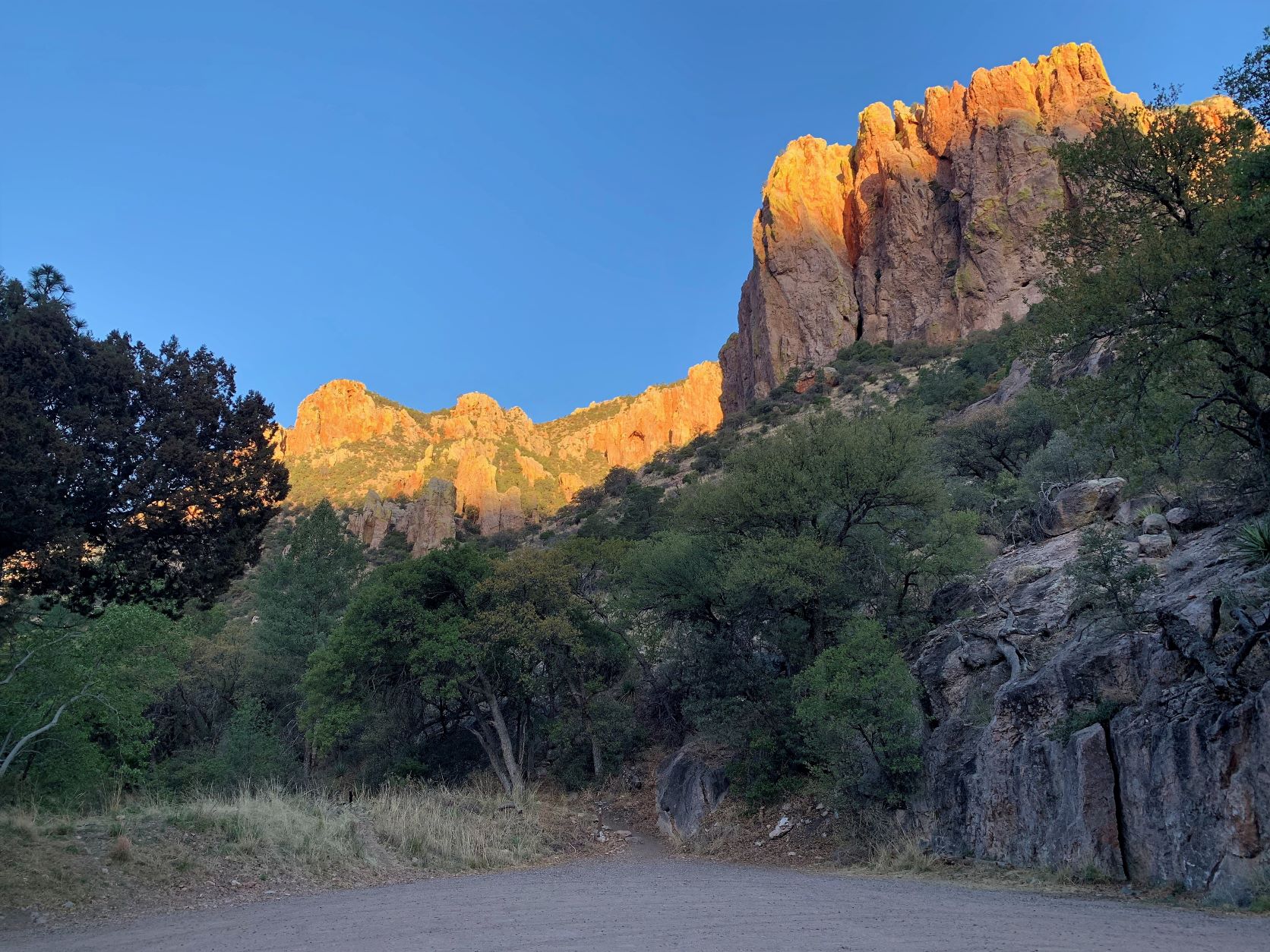 For the next hour and a half, I wandered up and down about a third of a mile of road, listening for the odd barking call of the trogon. Other people began arriving shortly after I got there, and I suppose there were 20 who came and went. Most of them gathered on the bridge over the creek, so that’s what I did. The FOMO was strong—I didn’t want to be elsewhere when someone spotted it so I stuck with the crown. I figured these people must know that they were doing.

I finally decided they didn’t. The guy who told me where to find it was there, and I asked him where, exactly, he’d seen it the day before. I directed me to a trail that headed up the canyon from the turnaround at the end of the road. You can make out the trail in the photo above at the far corner of the pavement. I walked up that way, leaving the crowds behind me. There was a couple by the start of the trail who were looking at a Scott’s Oriole. I got to chatting with them, and as I did, I heard a trogon calling from up the canyon. The three of us began walking toward the sound. After about 150 yards, I could tell the birds was off to my left, along the creek, and not on the trail. I cut over through the woods and actually circled the bird. I expected it to be 20-30 feet up in the trees, but I was looking in the wrong place. I was walking back down the canyon in the creek bed when I spotted it low in the understory next to the creek—maybe two feet off the ground.

It is a stunning bird. It’s easy to see why it’s the main attraction to birders in Arizona. It’s large, about the size of a flicker, but it seems larger. In some ways, it’s parrot-like. It had four notable characteristics: 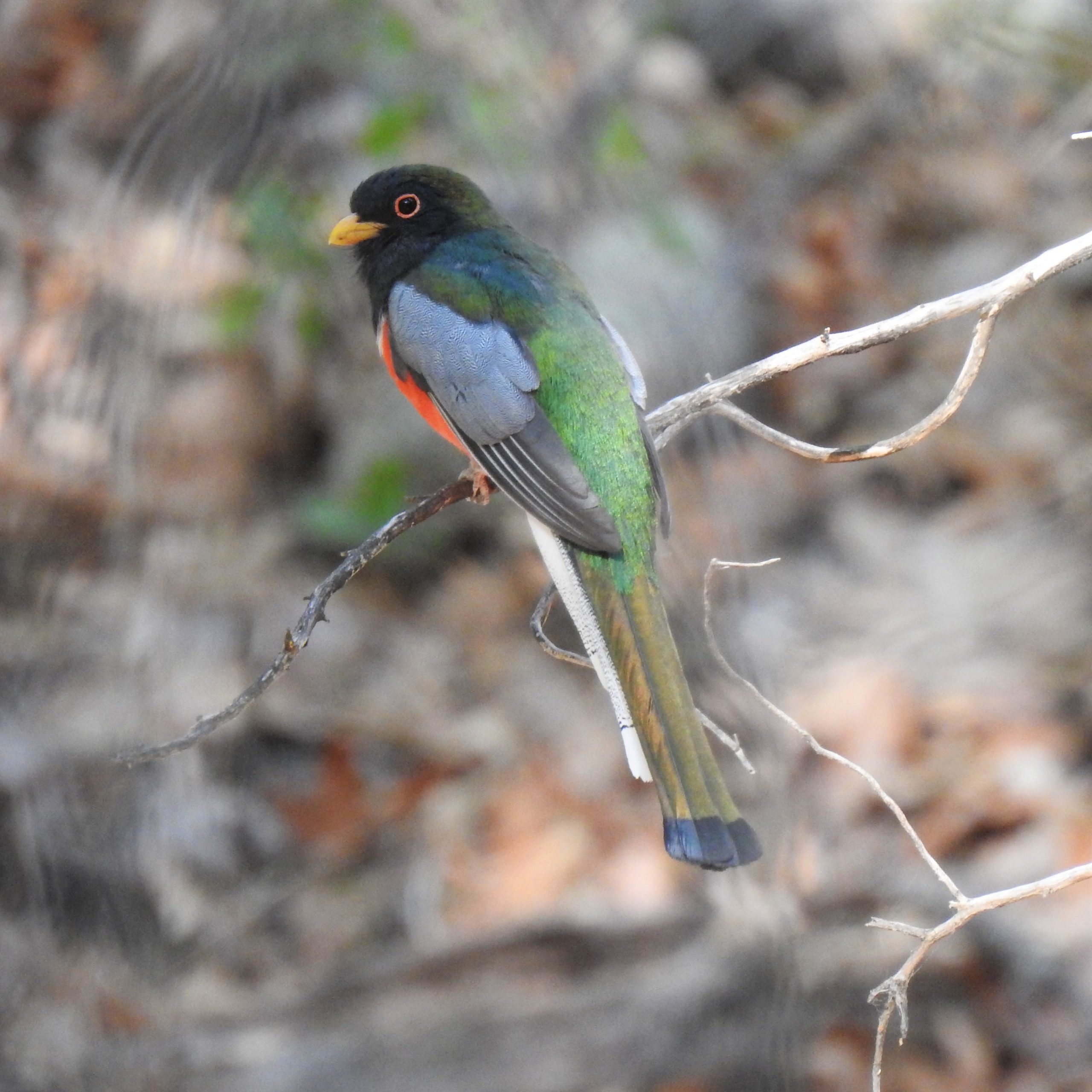 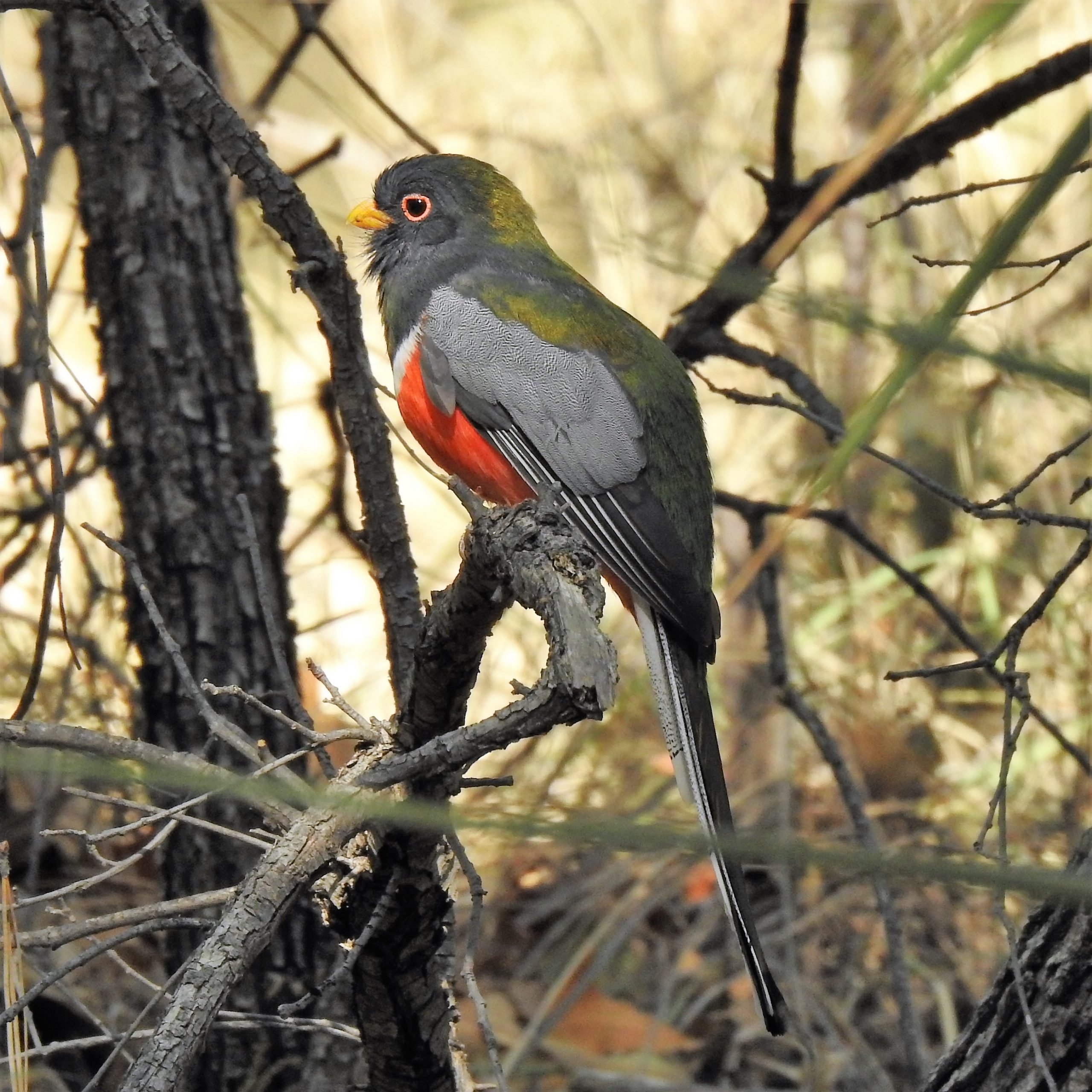 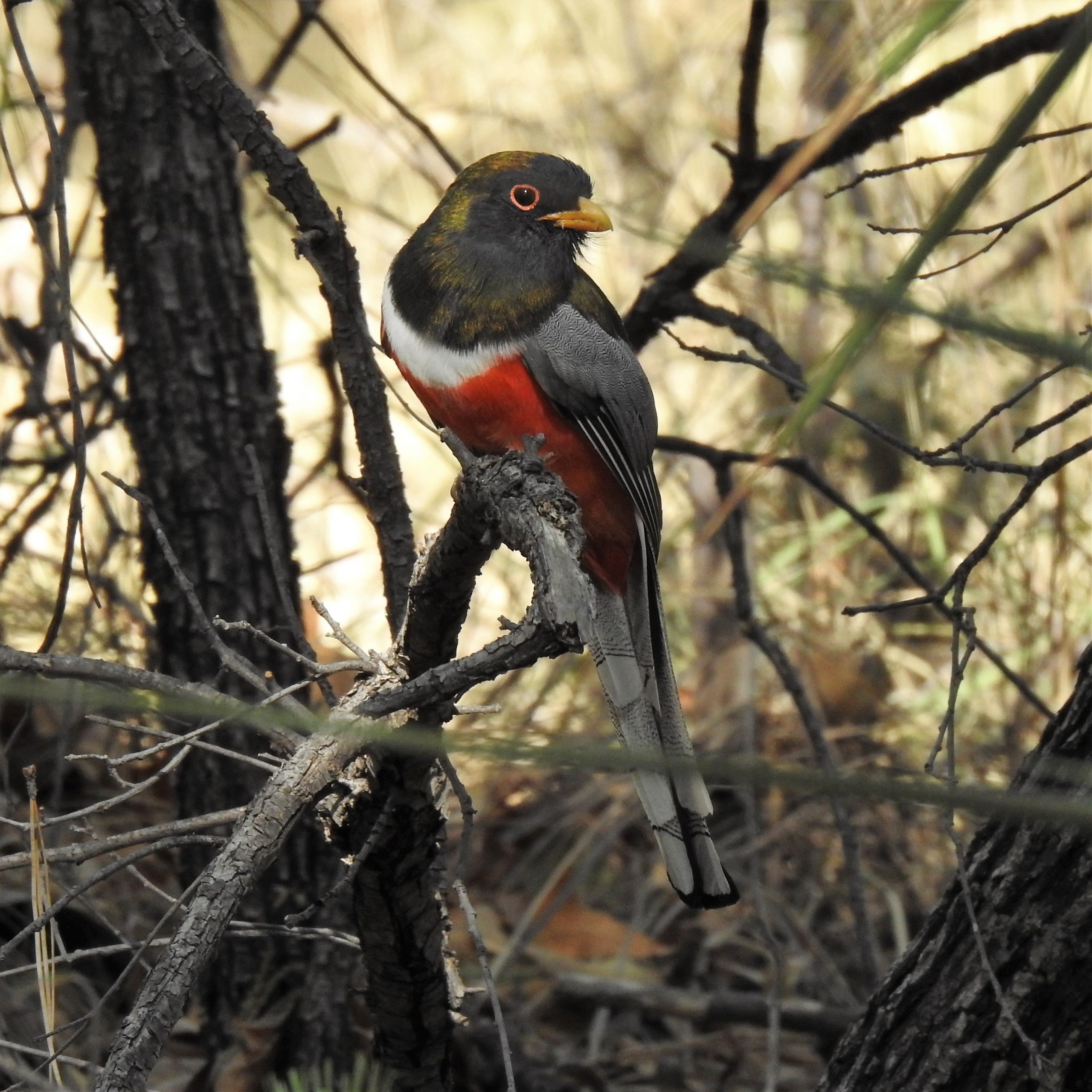 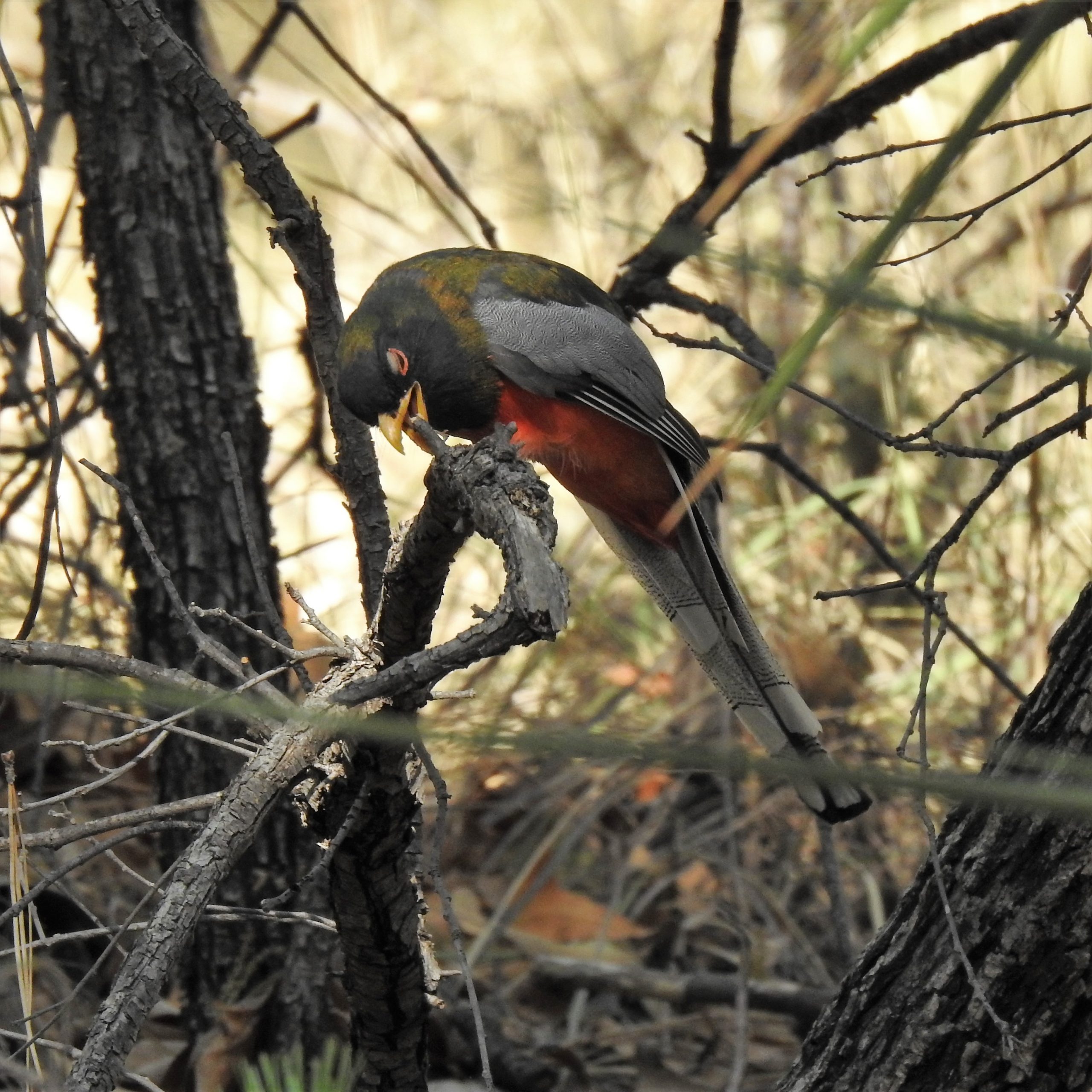 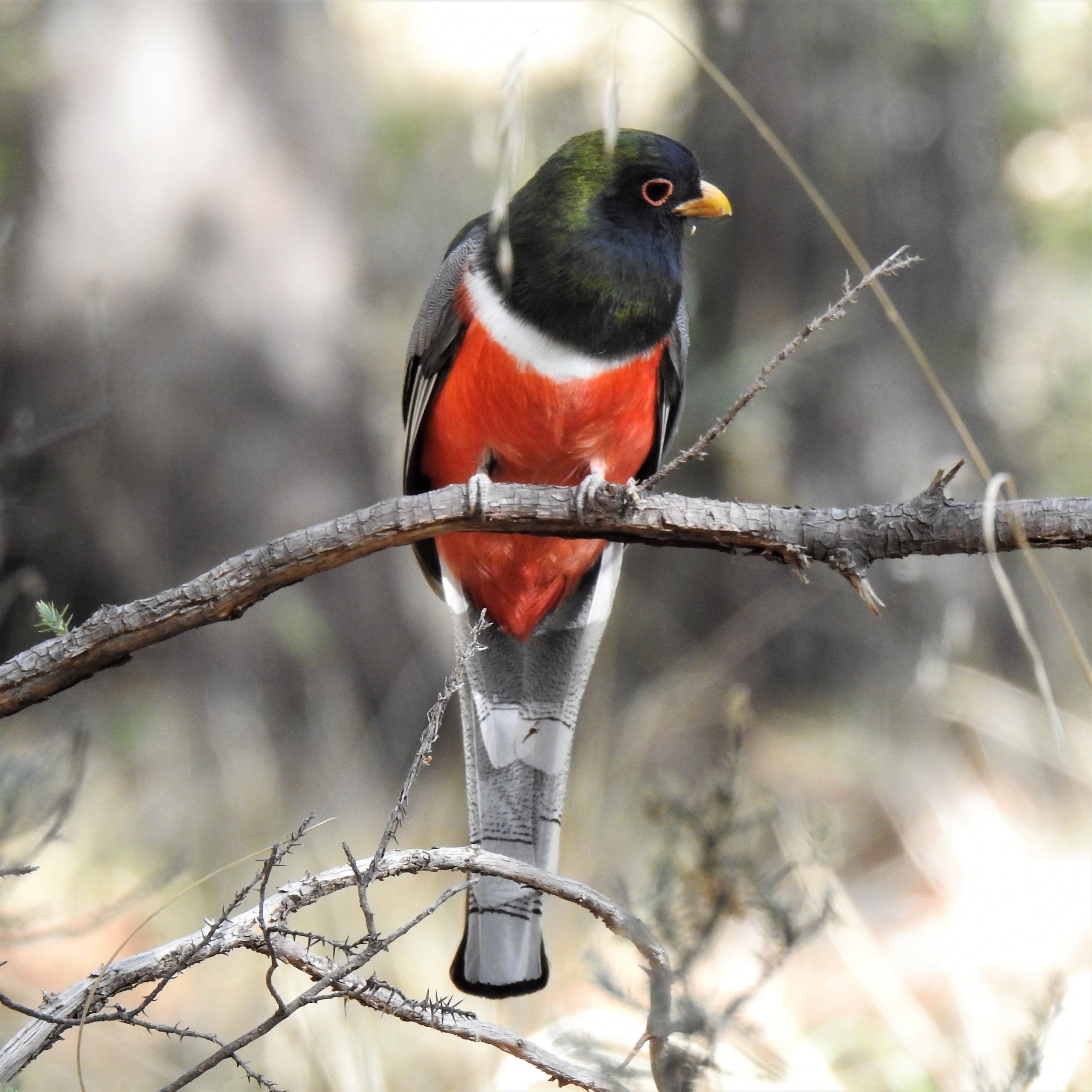 For the next 10 minutes, I followed it through the trees. So far as I could tell, it never paid the slightest bit of attention to me. I spotted the couple zeroing in on the sound from the other side, so I waved to get their attention and showed them the bird. After getting good looks, we stopped following as the bird continued working its way down the creek. So far as I know, none of the rest of the people in the canyon that morning saw it.

I went back to South Fork in the afternoon to look for warblers and anything else that might show up. Three other birders who I’d run into in four different locations throughout the day were there also. I was hunting for new stuff, but they heard a trogon, so we followed the noise through the woods to the creek and soon spotted it. It was probably the same bird I’d seen in the morning. People told me there’s a pair in this section of the canyon and another pair farther up.

This time the was further off the ground. It was behaving the same way it had in the morning except that it only called maybe every four minutes now. 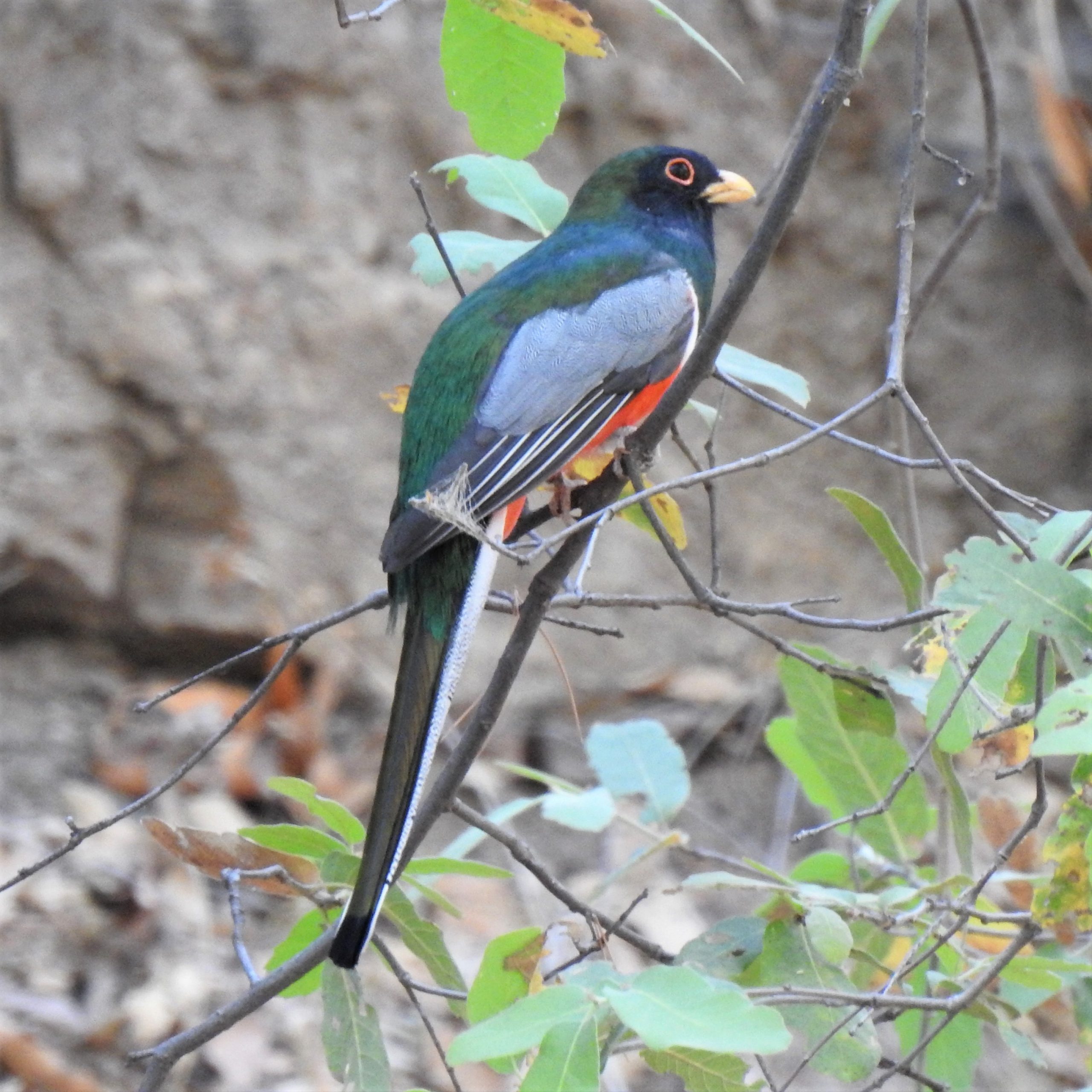 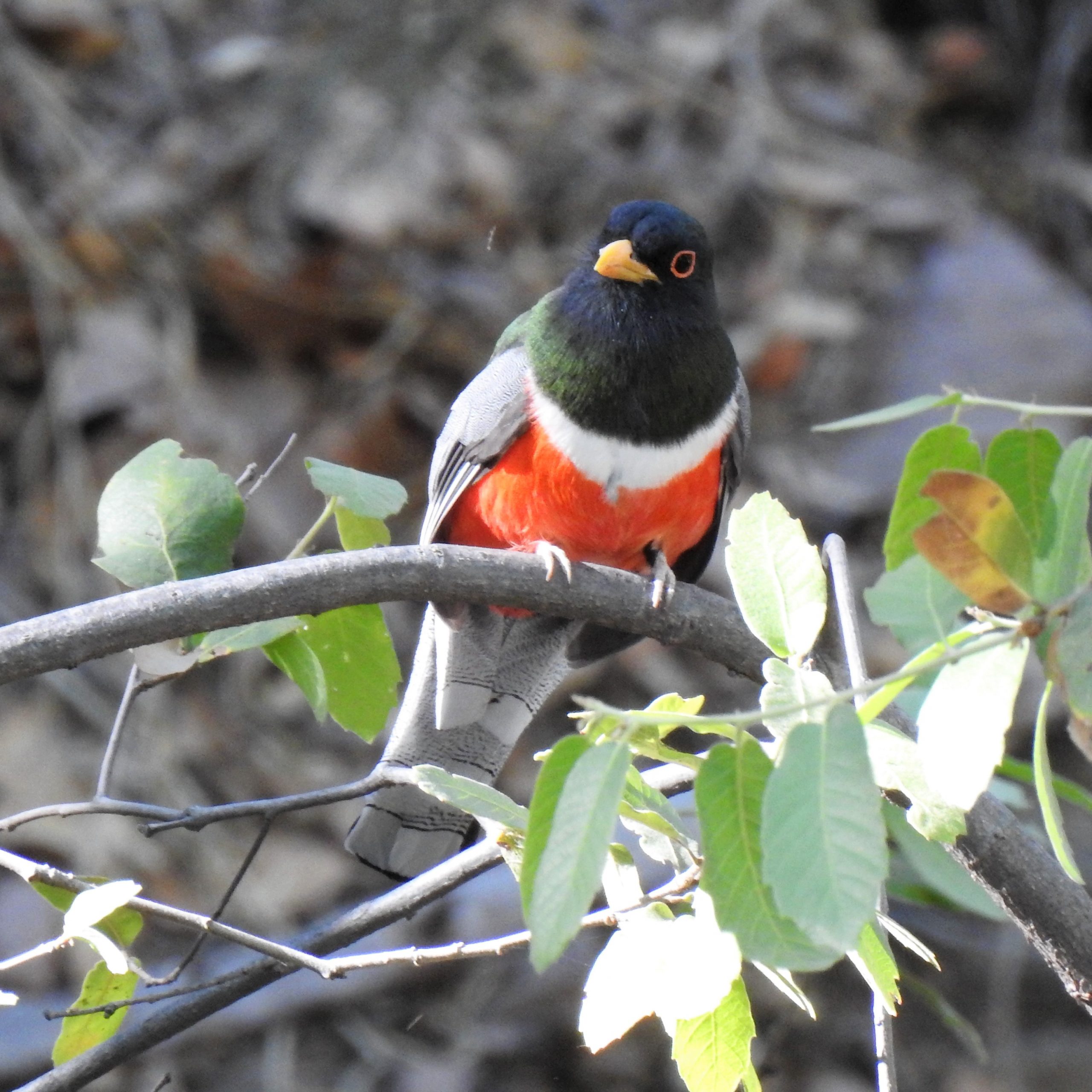 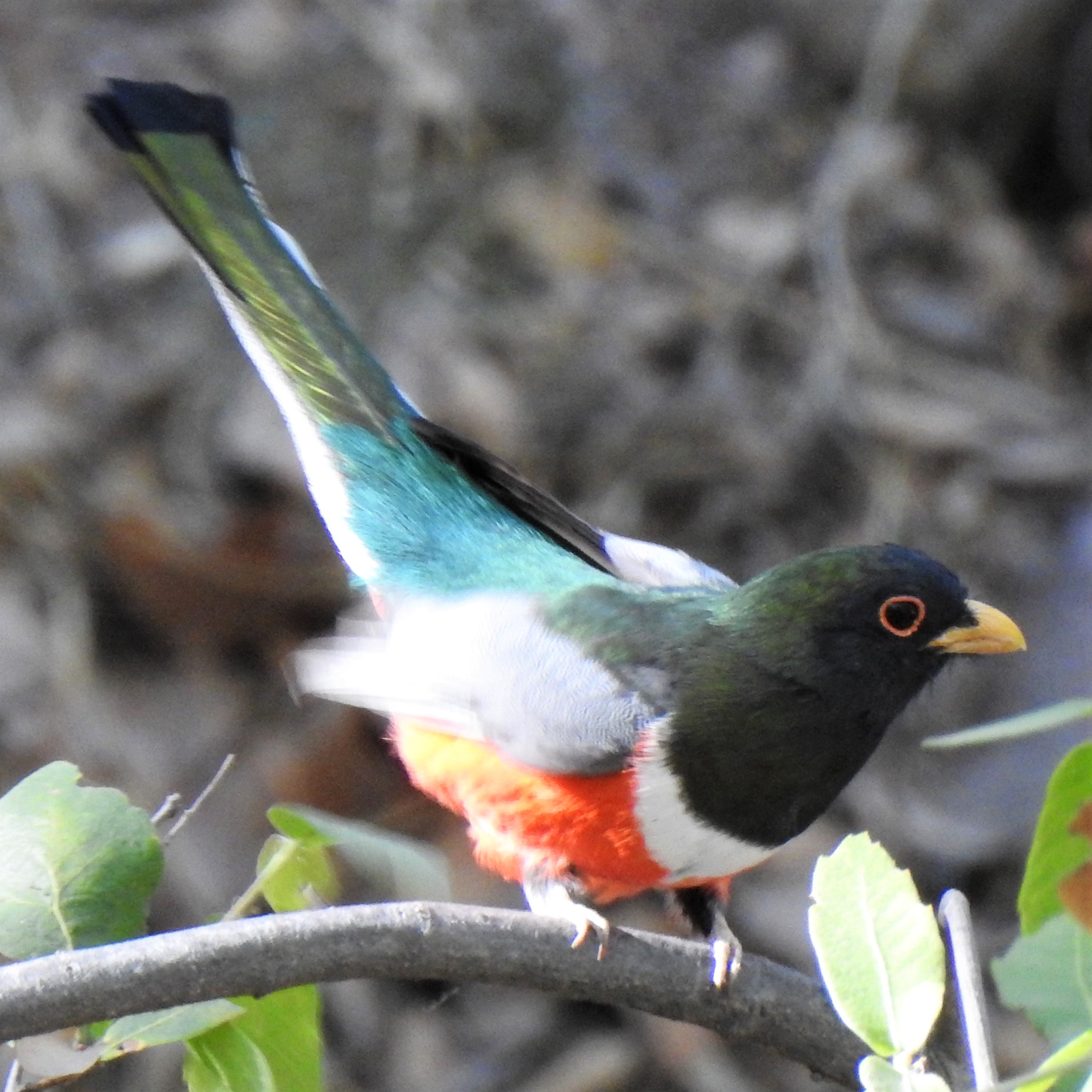 It stayed in the same location for so long that we left. We’d just gotten back to the road, about 20 yards from where we’d been standing, when another couple showed up. We tried to show it to them, but it was gone. We left and they hung around. By myself, I continued wandering along the road up the canyon. I soon heard and saw the trogon by the bridge. I walked back down and found the new people. I told them where it was. I met them the next day and they said they’d seen it, not as close as we had, but they were happy. They thanked me for finding it for them.

And that’s the funny thing about this bird. I had to work to find it the first time, but after that, it kept finding me. The afternoon sighting I just described happened without any effort on my part. I was looking at other birds when the trogon came close. I even have a video of a Painted Redstart on which you can year the trogon in the background.

The next morning I went back to South Fork because I’d been told it was a good place to see Arizona Woodpeckers. (It was.) I parked far down the canyon from where I’d seen the trogon the day before and immediately heard and saw it in the branches right above the road. I watched it for a while until it moved back into the trees out of sight. Half an hour later, I was stalking a pair of Dusky-capped Flycatchers through the woods even farther down the canyon when suddenly the trogon flew over and landed in clear view about 40 yards away. All this time, other people were driving and walking up and down the canyon looking for it—some successfully and others not. It was weird the way I kept happening upon it.

The whole rest of the week, birders kept talking about trogons to me. I’d ask if they’d seen a Red-faced Warbler and they’d say, “No, but we saw a trogon.” I saw one couple staring intently into a tree. I said, “If you tell me you’ve found a Varied Bunting, you’ll be my favorite people ever.” They said they were looking at a vireo, but if I could show them a trogon I’d be their favorite person.

Another shot of Cave Creek Canyon and the road where I saw the trogon. 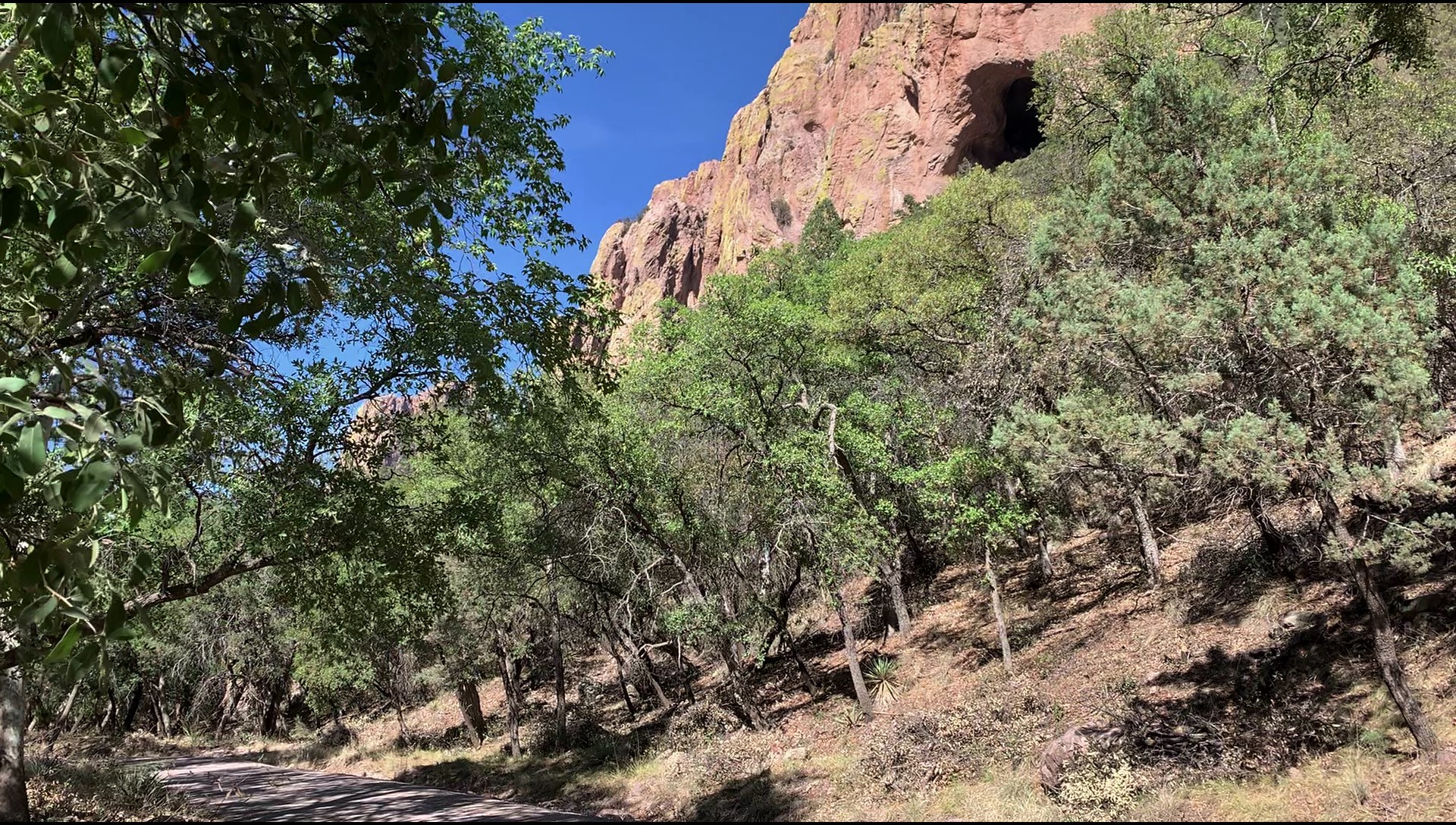