After easing my car back down the mountain from Rustler Park, I returned to South Fork Road because it offered my best chance to see lifers and I liked the place. I parked and walked up the canyon. There weren’t a ton of birds around, but the ones there were cool ones—the trogon, Acorn Woodpeckers, four kinds of warblers, Hepatic Tanagers. Around 4:30, the sun dipped behind the western canyon wall and it felt like evening. I was strolling slowly back toward my car, enjoying the day when I heard the unmistakable sound of a whip-poor-will in the nearby oak/sycamore woods. I taped the call with the Merlin app and it immediately identified the bird to be what I already knew it was.

I made a brief effort to cross the creek and look for it. After about 10 repetitions of the call, it stopped singing. I figured I’d scared it and returned to the road. I’d gone perhaps 30 yards when it began singing again. I walked back to the closest spot on the road and took the video above. At one point, I heard it give a few single-note calls. Again it stopped singing and, a few minutes later, I heard it or another one way off in the distance.

The Mexican Whip-poor-will used to be considered a subspecies of the Eastern Whip-poor-will. It was split off in 2010 because of slight differences in song, size, and other things. It ranges from Arizona and New Mexico down through Mexico into Central America. It is one of the birds I asked the guide to show me when I went owling in Patagonia three days after this “hearing.”

That owling trip took place in the woods near Patagonia, 92 miles southwest of Portal as the crow flies. It wasn’t hard to locate Mexican Whip-poor-wills in the pine/oak woods. We heard at least four. The guide, Matthew, and I got out and tried to draw a couple of them in with recordings of their calls, but only one responded. My guess is that you have to be very close to a nest to get it excited since they’re used to hearing other whip-poor-wills in the distance.

Matthew played the call, and a whip-poor-will began singing aggressively and close by. On two occasions, I saw its silhouette as it flew low over the road and over our heads. It looked large in the night—It has a wingspan of a foot and a half. It landed frequently and three times, as Matthew shined his light into the woods, he saw eye shine but I never caught a glimpse of it because the bird was light shy. After 10 minutes, we left the area to find another one and a Whiskered Screech-Owl. We saw the owl but couldn’t get another whip interested.

In our pre-trip emails and on our drive into the woods, Matthew had talked a lot about the need to use recordings responsibly, but his definition of what that meant was flexible. We went back to the spot where we’d stirred up the whip and got it riled again. It was hanging close by, moving frequently, and Matthew spotted it buzzing us again. Suddenly he shined his light into the woods right in front of us. The whip-poor-will was about 10 feet away, about three feet off the ground, and hovering in one spot facing away from us like a giant gray moth. We could see the white tail spots prominently and I wondered if this might be a threat display. It landed on a parallel branch not 15 feet away and I tried desperately to get a flash photo while Matthew urged me on and wondered why I didn’t know how to use my camera. (I never told him, but I’d actually forgotten to put the flash up.) After maybe a minute of posing the bird flitted off. Matthew continued to play the calls and make it fly around the area long after I was satisfied and had told him so. He was on a mission to show me the bird. Or to see it himself—I got the impression he’d never had one respond like this one was. We finally gave up after maybe 20 minutes and headed back to town.

Later, when looking at my camera, I realized I had been taking photos by the light from the flashlight, even though the flash wasn’t going off. With considerable lighting on my computer, I came up with this photo. You can tell its a nightjar with a lot of white in its tail (meaning that it’s a male). 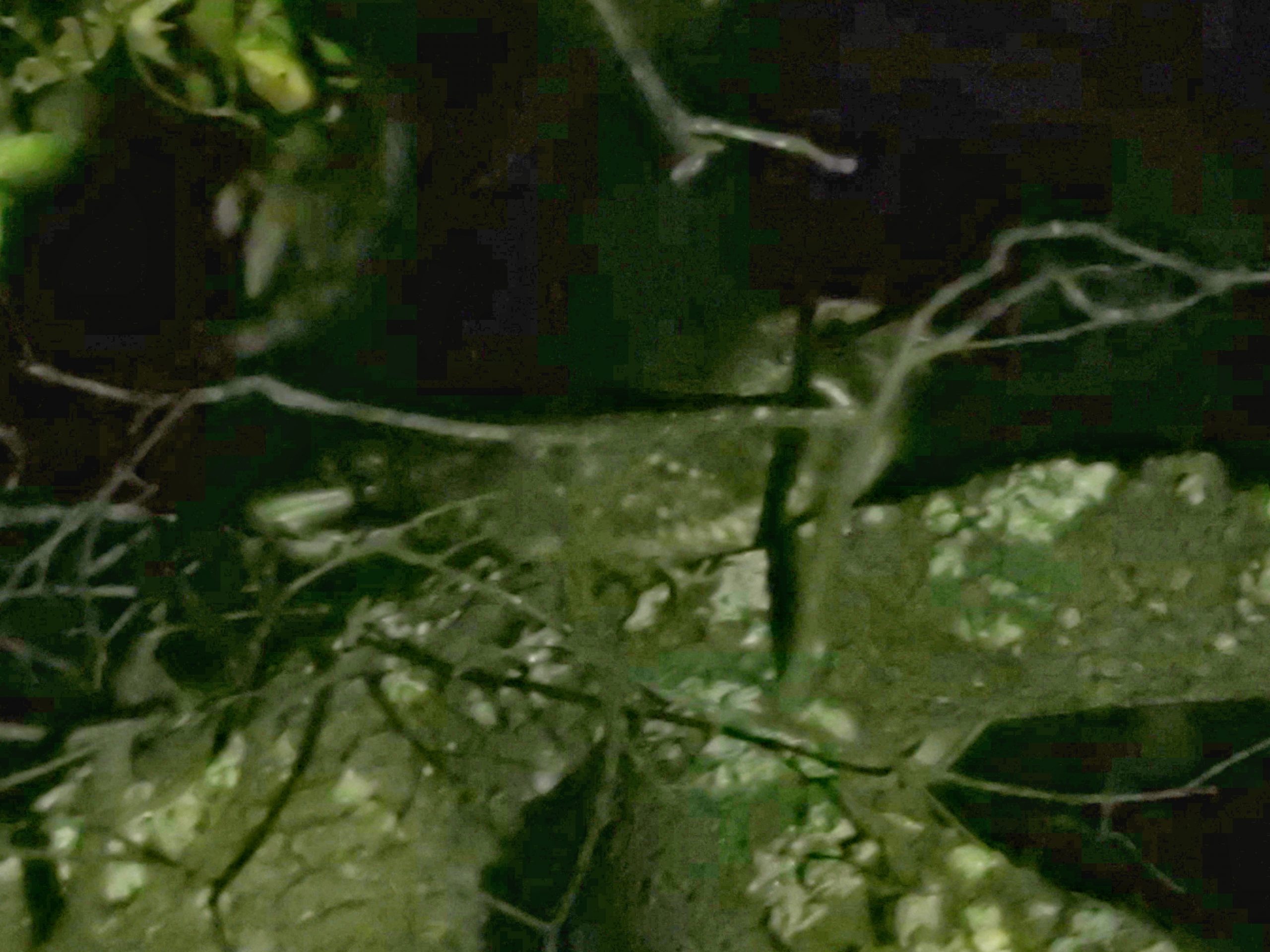