This sparrow had flown under my radar until I compiled a list of Arizona specialties. It’s seen regularly at Paton’s in Patagonia so I figured I’d pick it up there. But after an evening at Paton’s and skeptical looks from other birders I asked, Paton’s didn’t seem like a likely place. On Monday, I met David at Rio Rico. While we were waiting for the Green Kingfisher to make one of its quick fly-bys, I asked him where I could see the birds I still needed. He suggested Santa Gertrudis Lane in Tumacacori for this sparrow and the Thick-billed Kingbird. 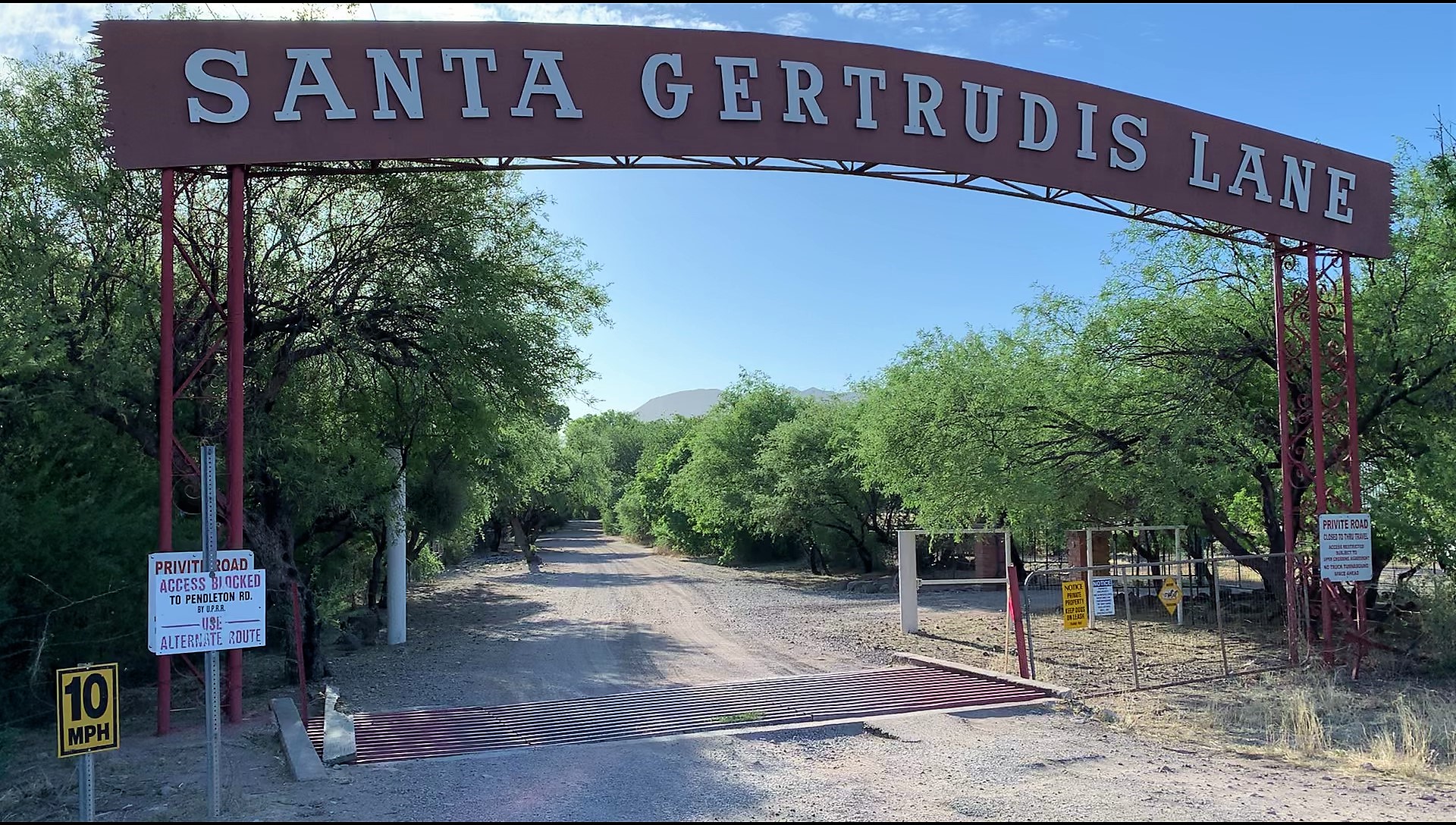 I started walking east along the dirt road toward the river through an area with small trees with grass below. David had told me the Rufous-winged had a song that sounded similar to a Spotted Towhee and I heard it within 20 yards of where I parked. I played the song on my phone and a Rufous-wing flew out of the scrub on the south side of the road and landed in a tree on the north side about six feet above my head. It didn’t move a lot, just a few short hops to different branches in the same tree. It made some very soft chip notes and then began singing again, looking around and seeming pretty relaxed. At one point it turned around, giving me a good look at its back. It then moved to an even more open branch, giving me great views. I never saw the rufous on the wing that gives it it’s name (and which the field guides say hardly anyone ever sees) but I saw and got good photos of the rest of its marks. After maybe five minutes it flew off into the trees. 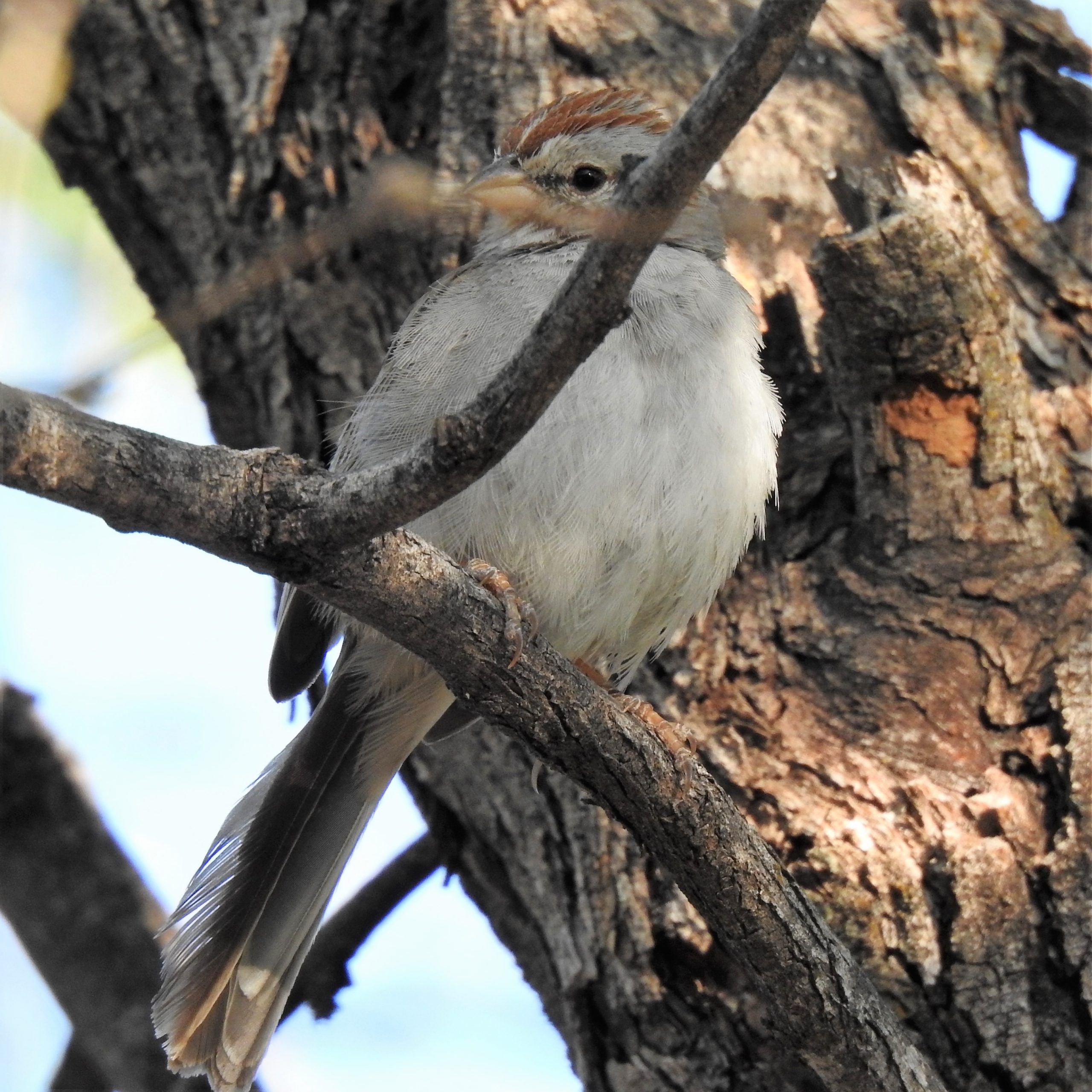 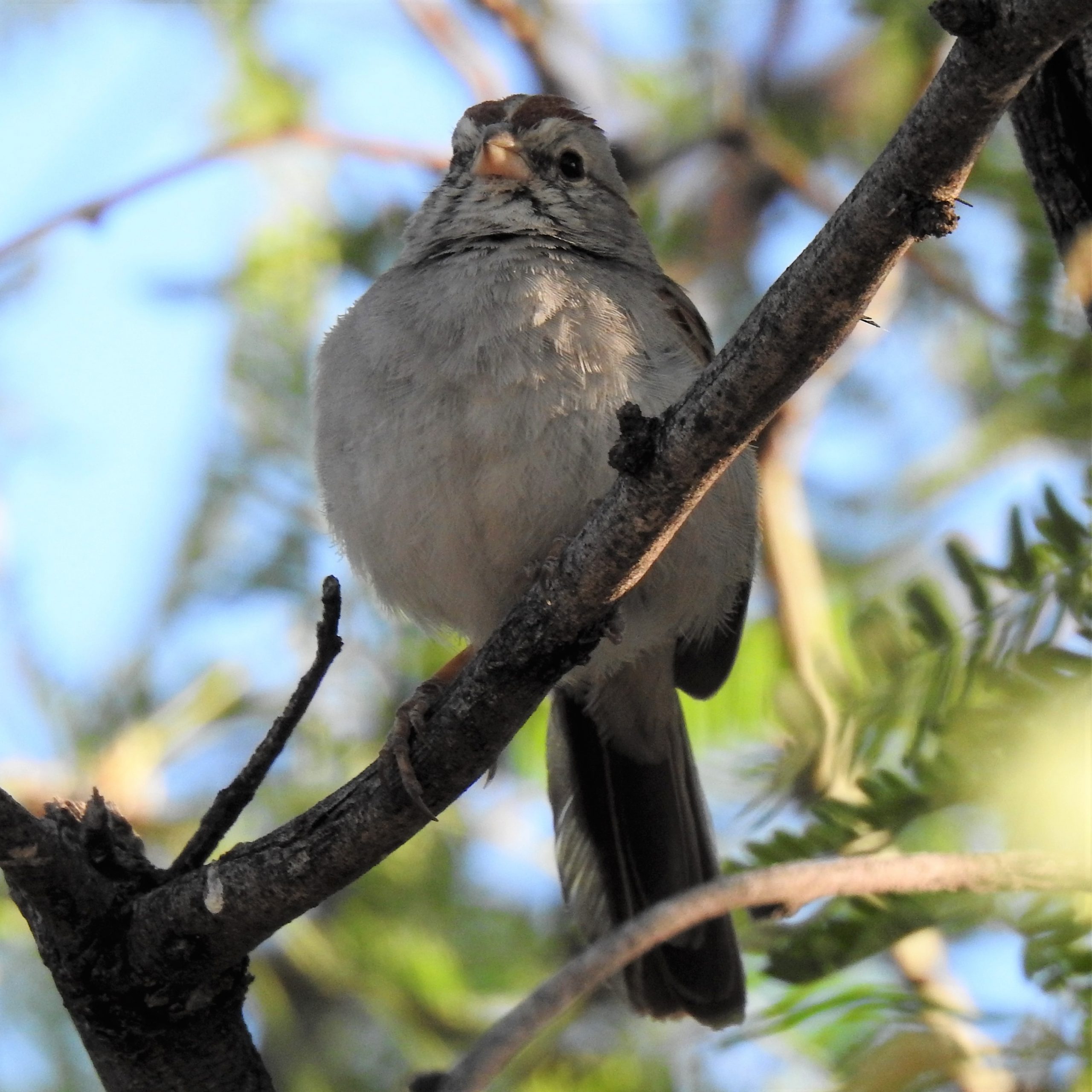 It looks a little like a Chipping Sparrow with its red crown, but the eye line is reddish, not black, the belly is gray, not white, and the tail is rounded. The dark throat stripes, visible particularly well in the photo above, are also a mark. 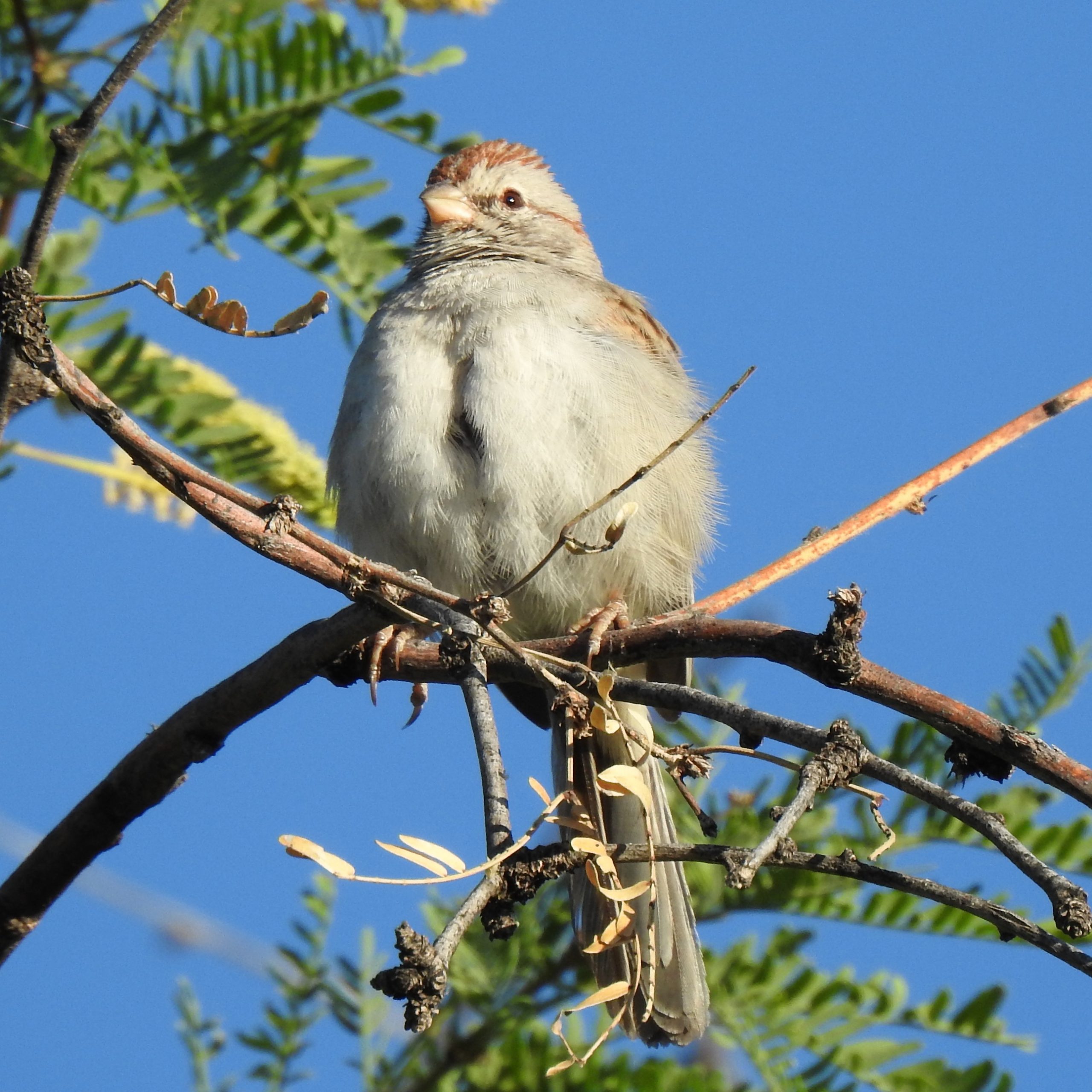 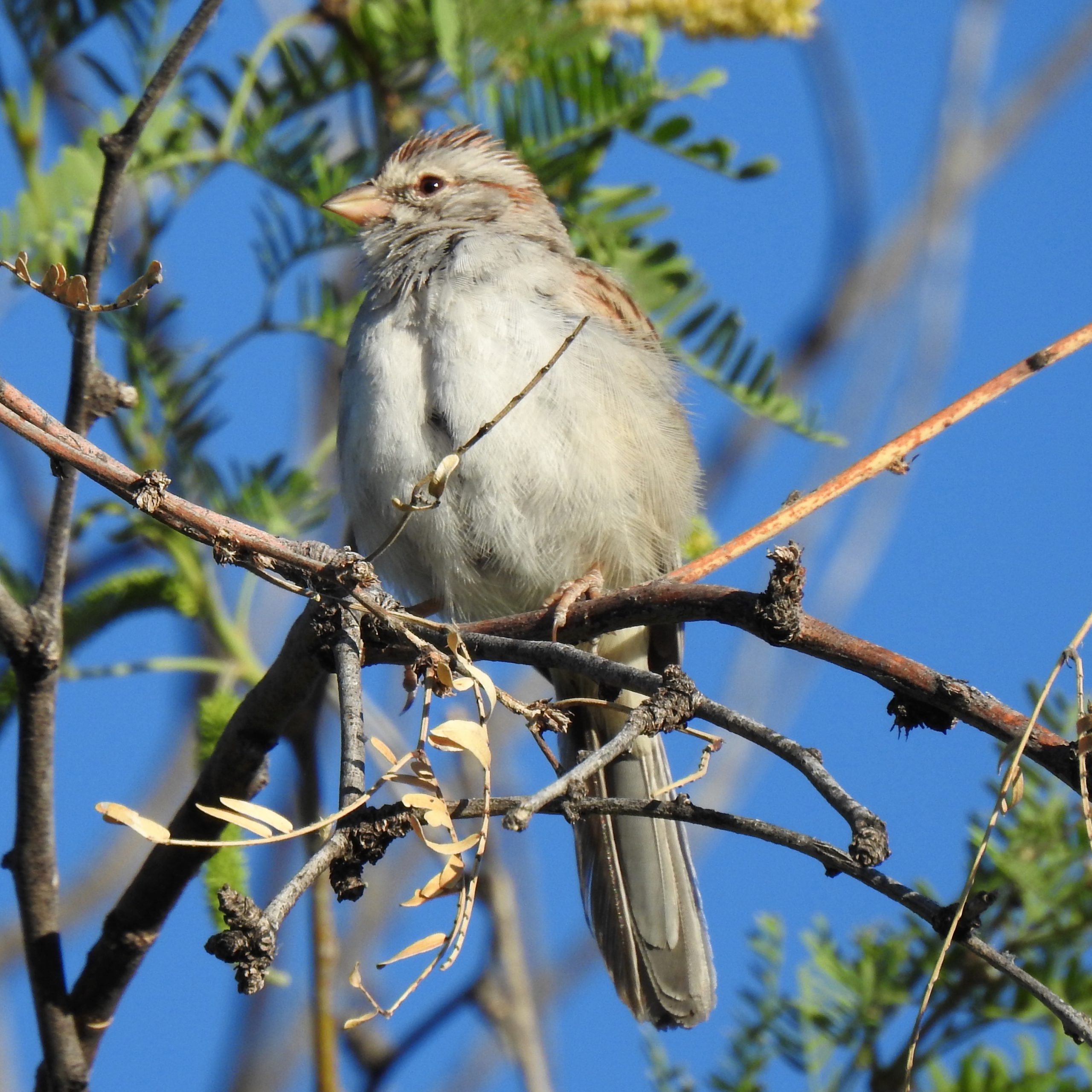