I sat in my room on Wednesday night and wondered if I’d stayed in Patagonia too long. I had a list of target birds for the trip, and I’d see all the ones I had a practical chance of seeing except for two—Varied Bunting and Botteri’s Sparrow. A bunting had been seen a few days earlier on the Lake Patagonia birding trail. I’d tried to find it on Tuesday and missed it. I found out later on Thursday that it had been seen again that day. I wish I had gone back—this is the one miss of the trip. The other birds I didn’t see all involved long drives on rough dirt roads and/or being out late at night.

That left the Botteri’s Sparrow.  The problem was that the best spot was at the foot of Madera Canyon, where I’d just been on Wednesday. It meant an hours drive each way, but I’ve gone a lot further than that for a lifer and I felt like I’d exhausted the immediate Patagonia area. I woke up at 5:00 (no alarm) and by 7:00 I was in the Proctor Road parking lot where the birds have been seen regularly and as recently as the day before—when I drove right past the place.

Botteri’s is a big, plain sparrow that lives in desert grasslands with scattered mesquite and ocatillo. People had been seeing it right from the lot. I’d only been there about 15 minutes when I saw two birds chasing low through some brush. One landed low in a bush where I could see it through a gap in a closer bush,  but by the time I got my camera on it, it was gone. It looked like a big, plain sparrow with rufous coloring on the wings, a pale bill, and plain grayish white on the breast and belly. Was it a Botteri’s? I think so. Was it a good enough sighting to count? No.

I spent the next hour and forty five minutes walking back and forth in the parking lot and on the entrance road without so much as a glimpse or peep of a possibility. Finally, after two hours, I gave up on Proctor Road. There was another spot on Madera Canyon road —that I’d have to pass anyway—where someone had see one recently, and I was going to try there but I didn’t like my chances.

But as I was heading toward that spot, I passed an unmarked paved side road. On a whim, I stopped and backed up and turned. After maybe 150 yard, the road ended at a turnaround circle. I stopped the car and before I got out, I could clearly hear a Botteri’s Sparrow singing from a large stand of ocatillo. I took a video of the area with the bird singing to prove I’d found one. I tried to see where it was but couldn’t find it. I looked up the song on eBird and found a recording that I think, by the description, was made at that exact spot—maybe by that exact bird. I played it a few times and the sparrow landed first on an ocotillo stalk about 10 feet away and then in a mesquite not much further off. I got good looks and photos and am pretty sure the bird I’d seen earlier in the morning was a Botteri’s.  But I know this one was. I watched as it moved around the cul-de-sac for about 10 minutes, then headed back to Patagonia happy with my 24th lifer of the trip. 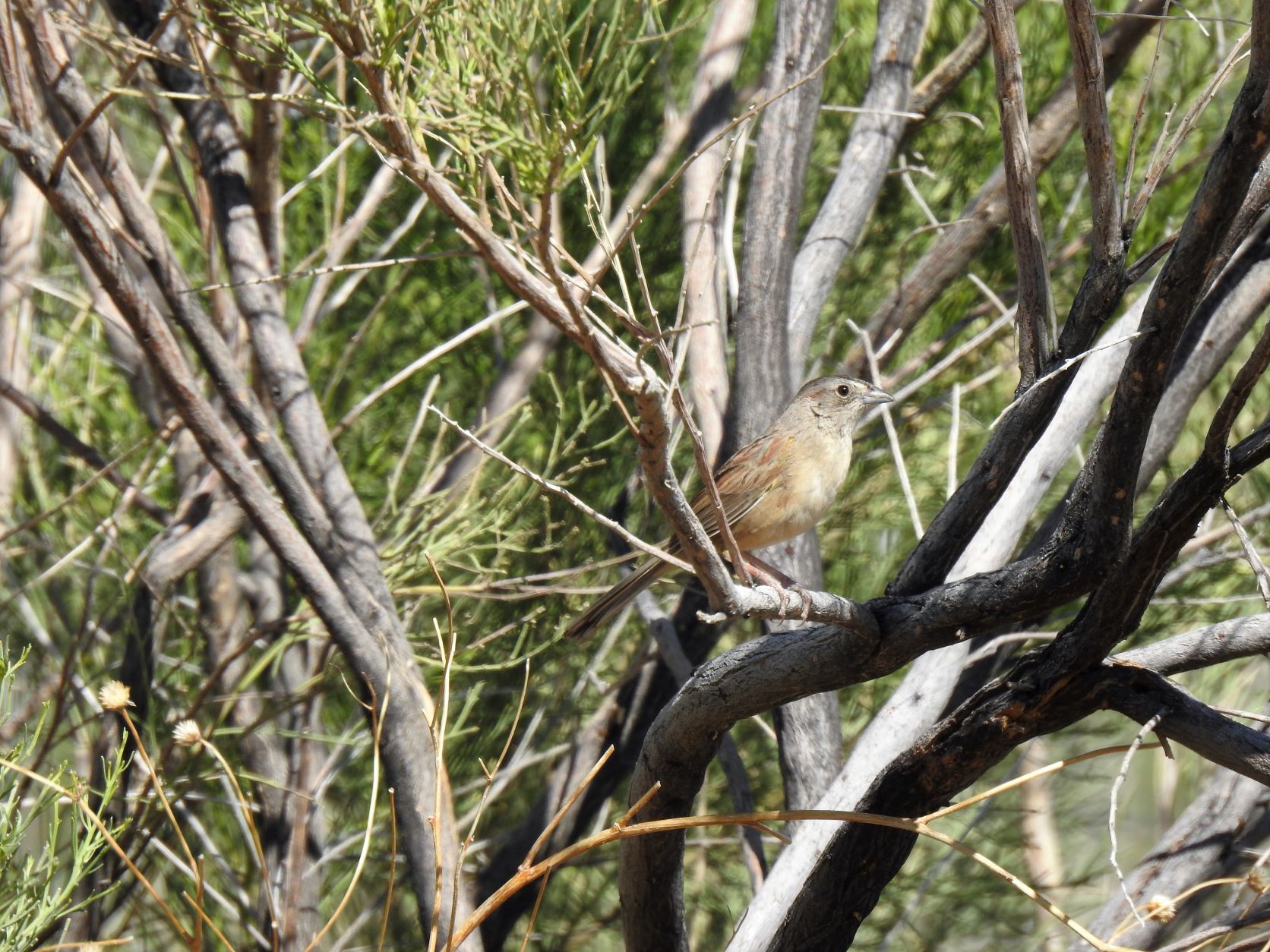 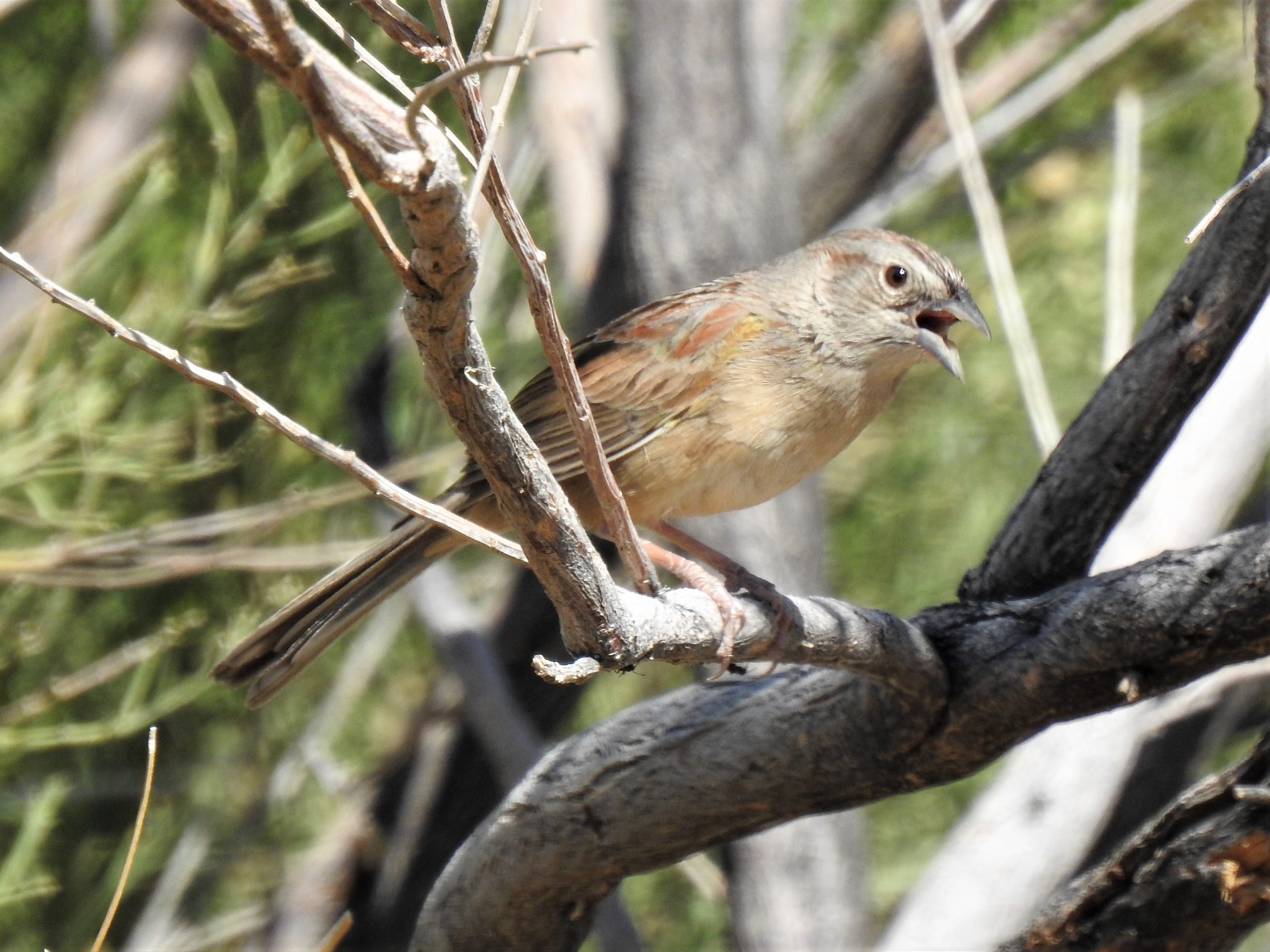 Botteri’s Sparrow is a large, plain looking sparrow with a long bill and buffy-gray belly.

The sparrow can be heard singing (faintly) in the first clip of the video, and making chip notes in the second and fourth. The singing in the third clip, I’m pretty sure, is the recording on my phone.