When the 2016 baseball season began and it became immediately apparent that the Cubs were very, very good, I decided I couldn’t let the year go by without seeing at least one game. Miller Park, in Milwaukee is almost twice as far from my house as Wrigley Field (74 miles vs. 40 miles) but the time it takes to get to both of them is almost identical. Brewers’ tickets are also cheaper. I picked a Tuesday in September because … I don’t remember.

As it turned out, I managed to get to Wrigley twice during the year but I didn’t mind a third game. My wife came along. We drove up and arrived about an hour and a half before game time. 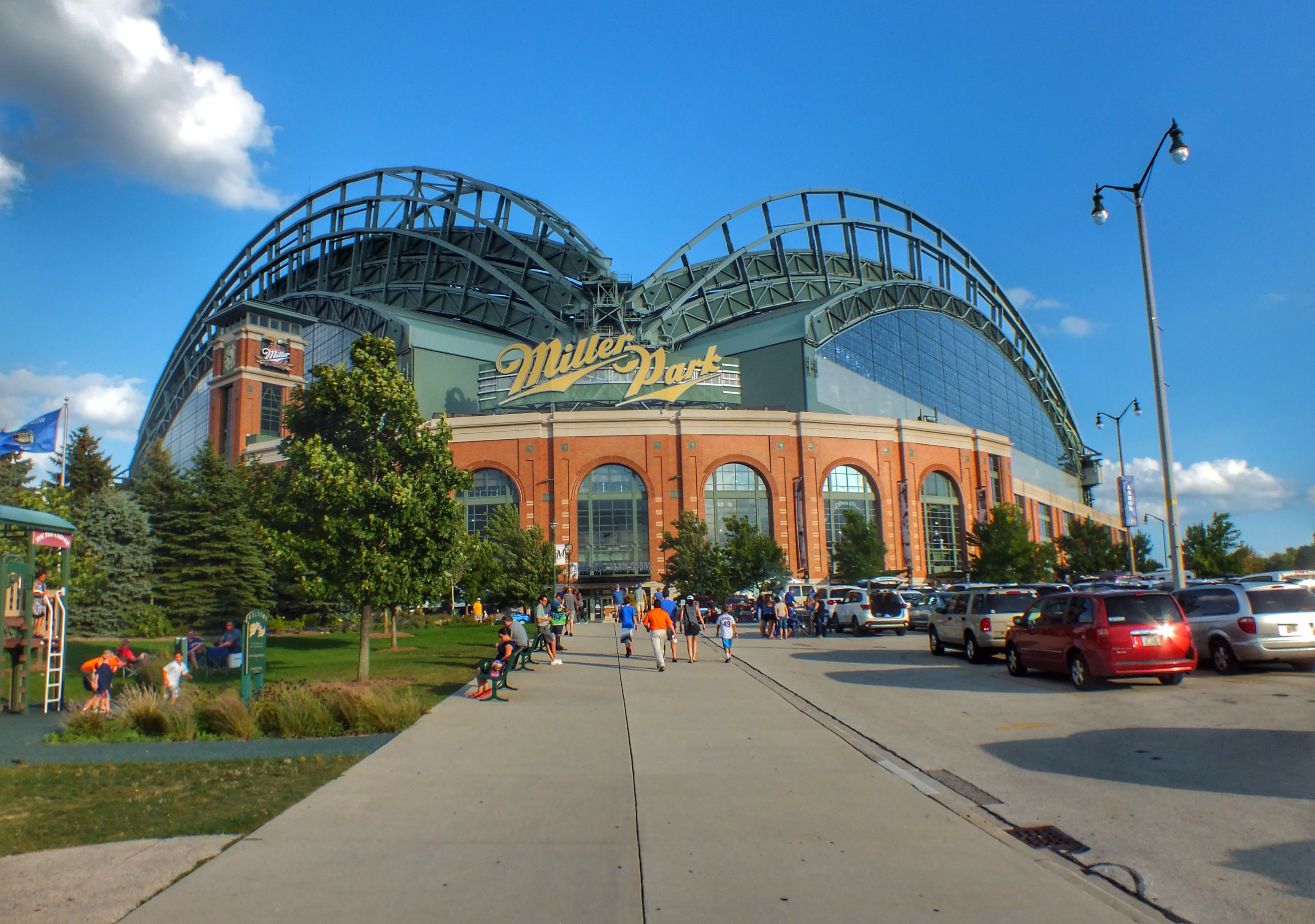 Statues of Robin Yount and Hank Aaron outside the park. 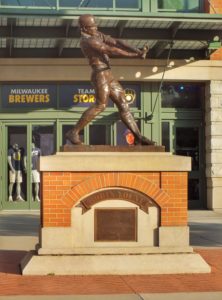 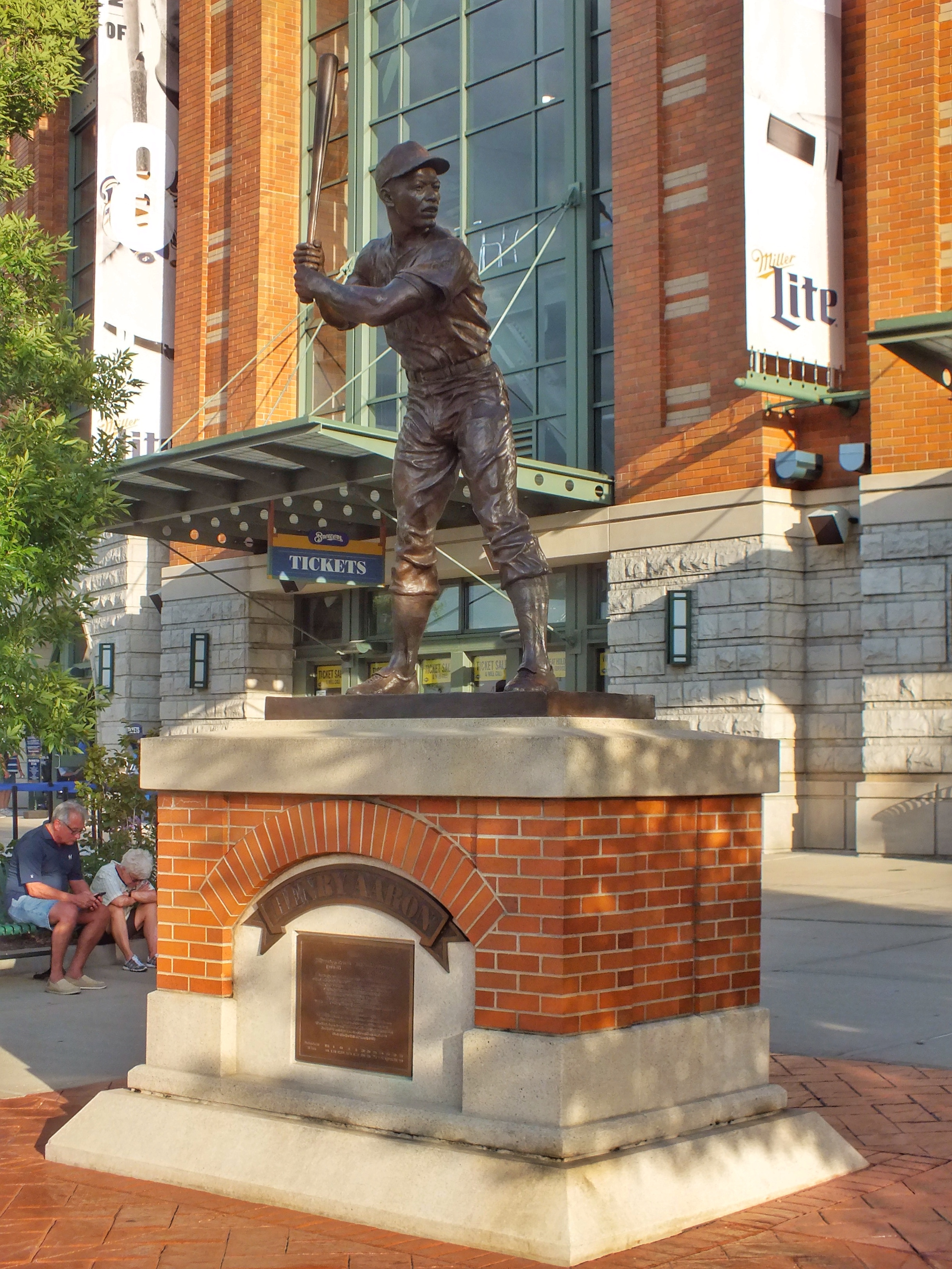 We strolled all the way around the park on the main level. 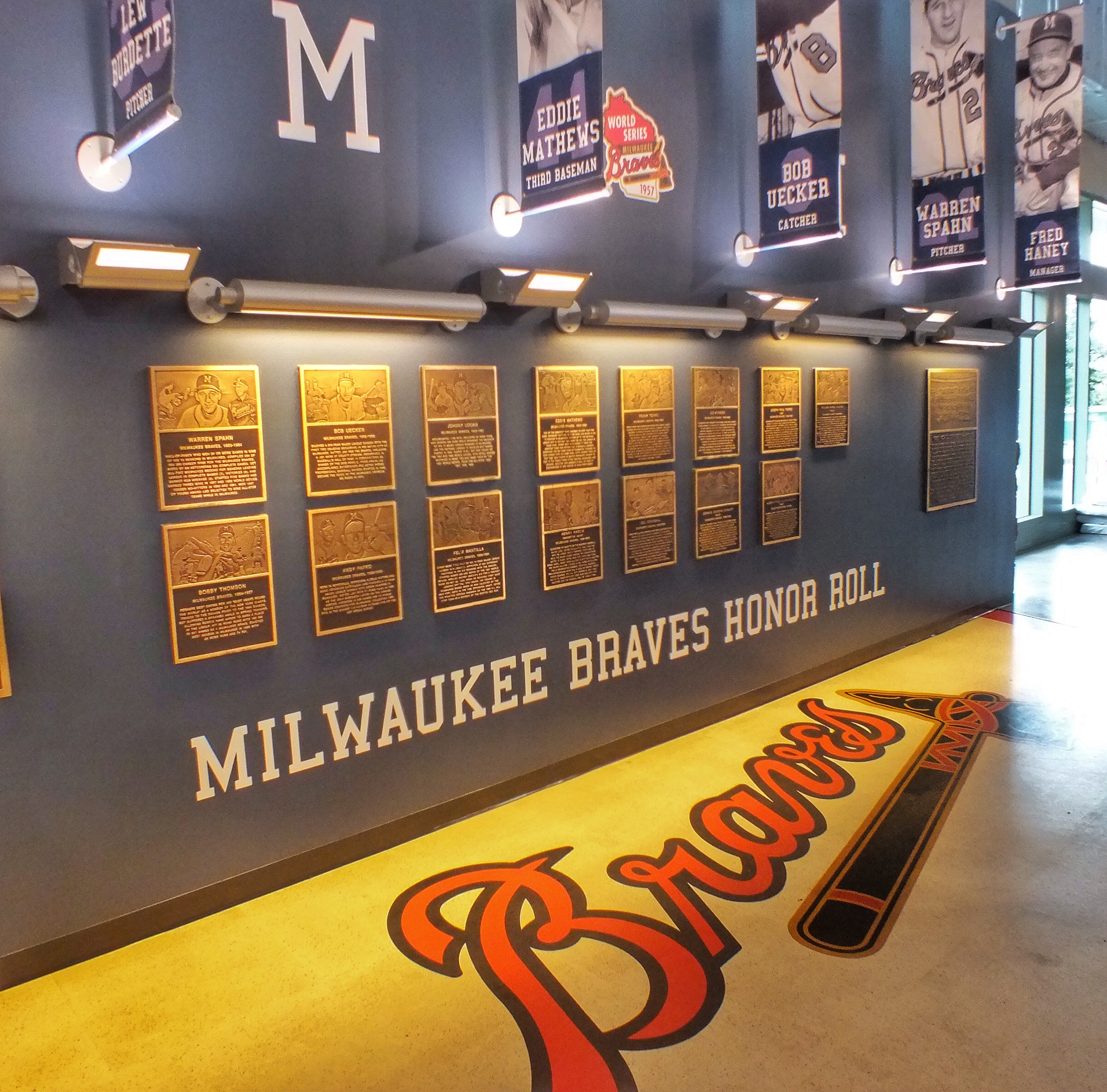 Looking in from center field at Cubs batting practice. 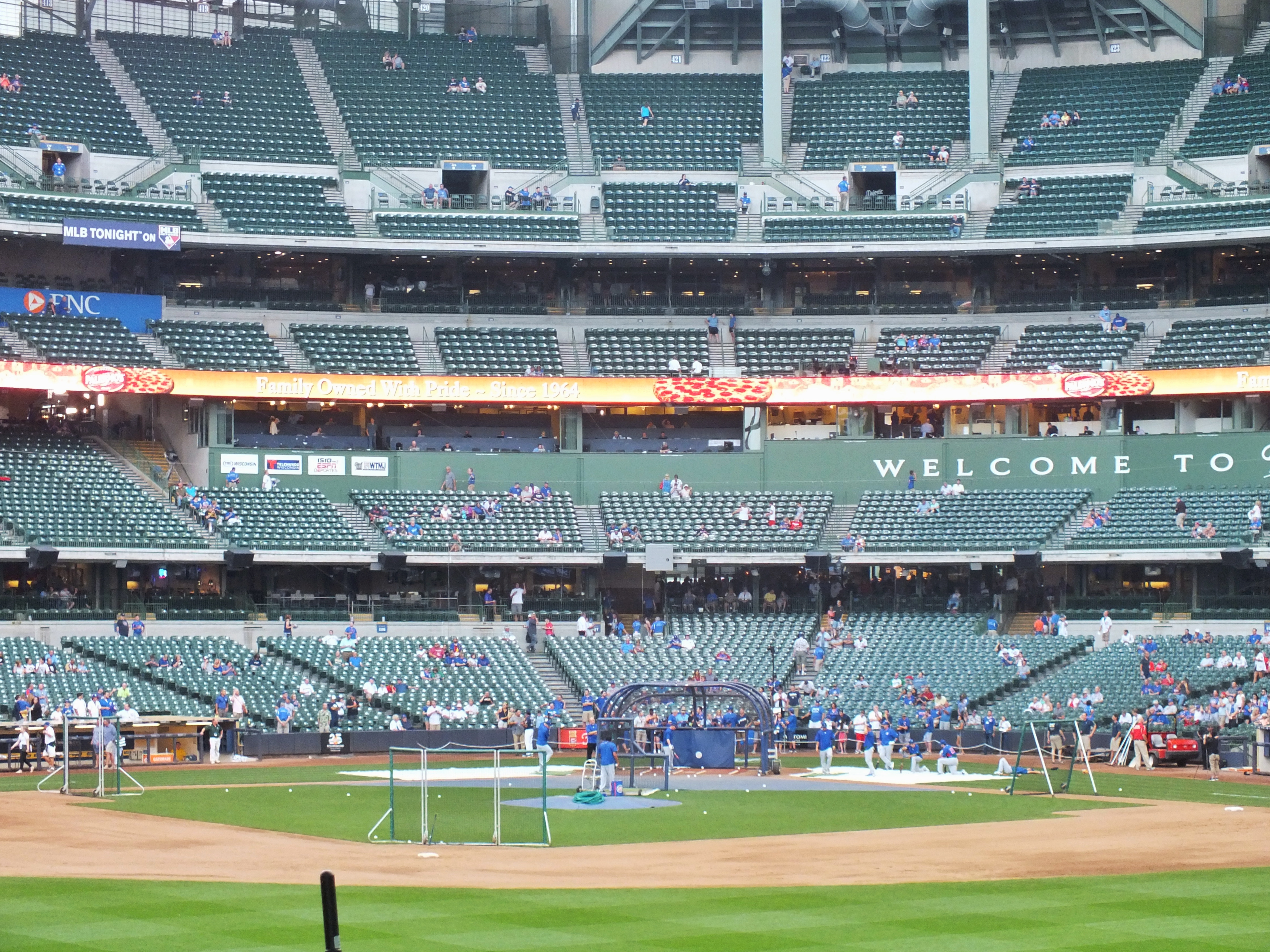 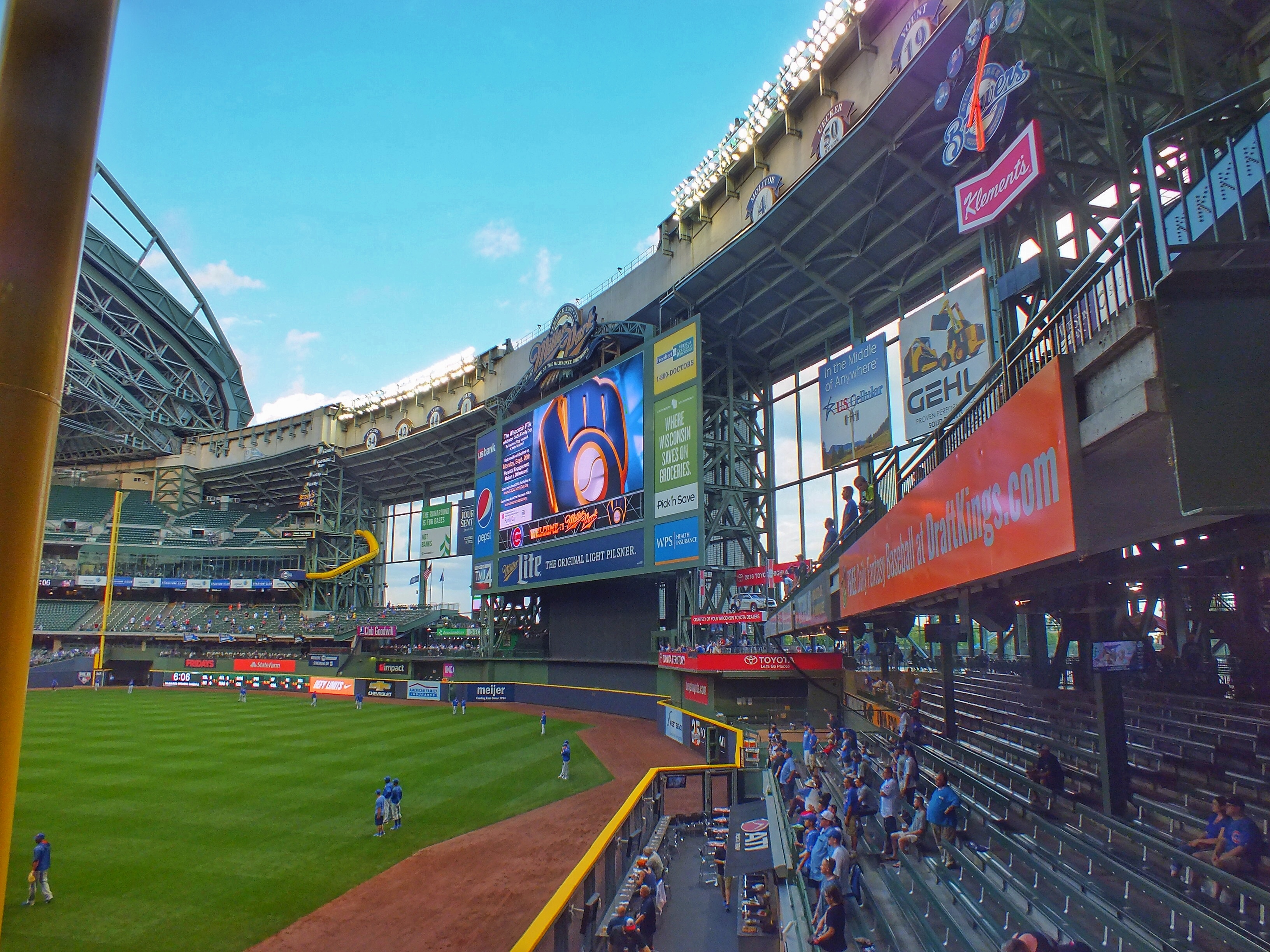 Our seats were in the upper deck above third base. We were on the aisle and our view of much of the field was blocked by the railing around a stairwell.

I heard an announcement about a statue of Bob Uecker, Brewers’ broadcaster. It’s a take-off on a famous commercial. I headed up to get a photo and found myself in a short line. The young woman in front of me apologized for taking so many photos of her family and then volunteered to take one of me. 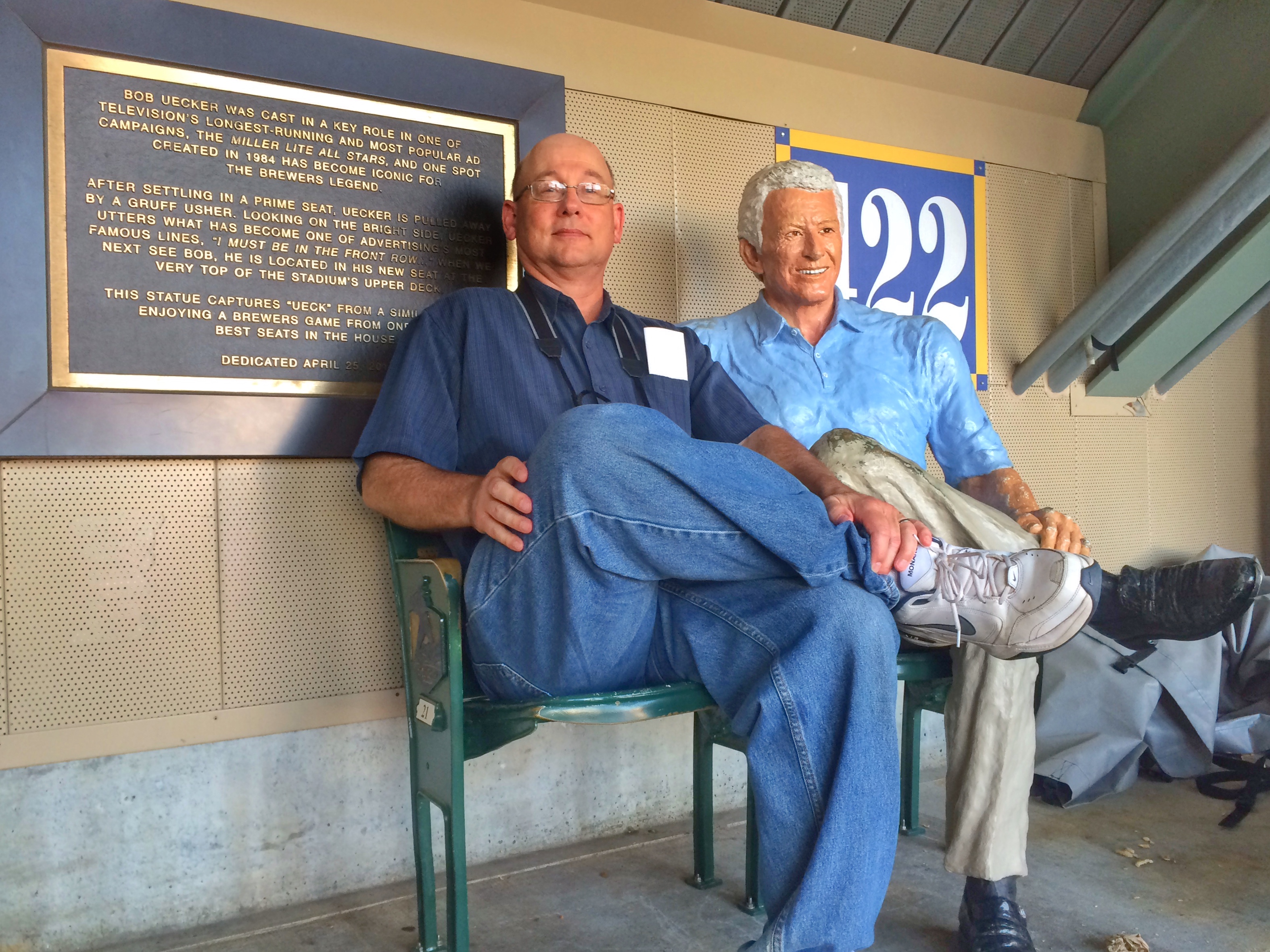 It was very humid and we were dripping wet. As game time approached, nobody sat in the row in front of us. We moved down, expecting to have to move back up soon, but nobody ever came to sit in those seats so instead of a blocked view, we had this. 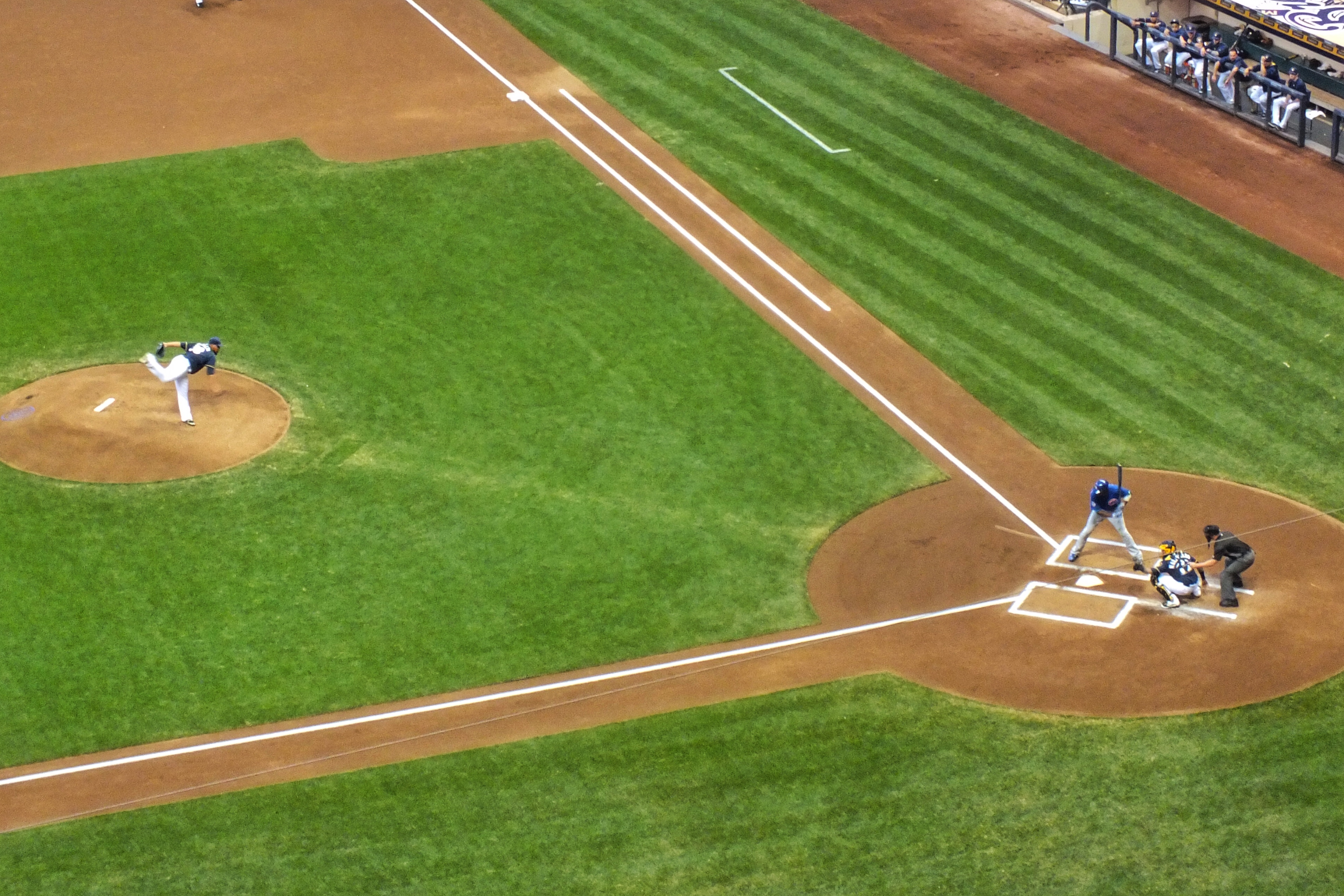 The game started out well. Anthony Rizzo hit a solo home run. I happened to take a picture of the very swing. 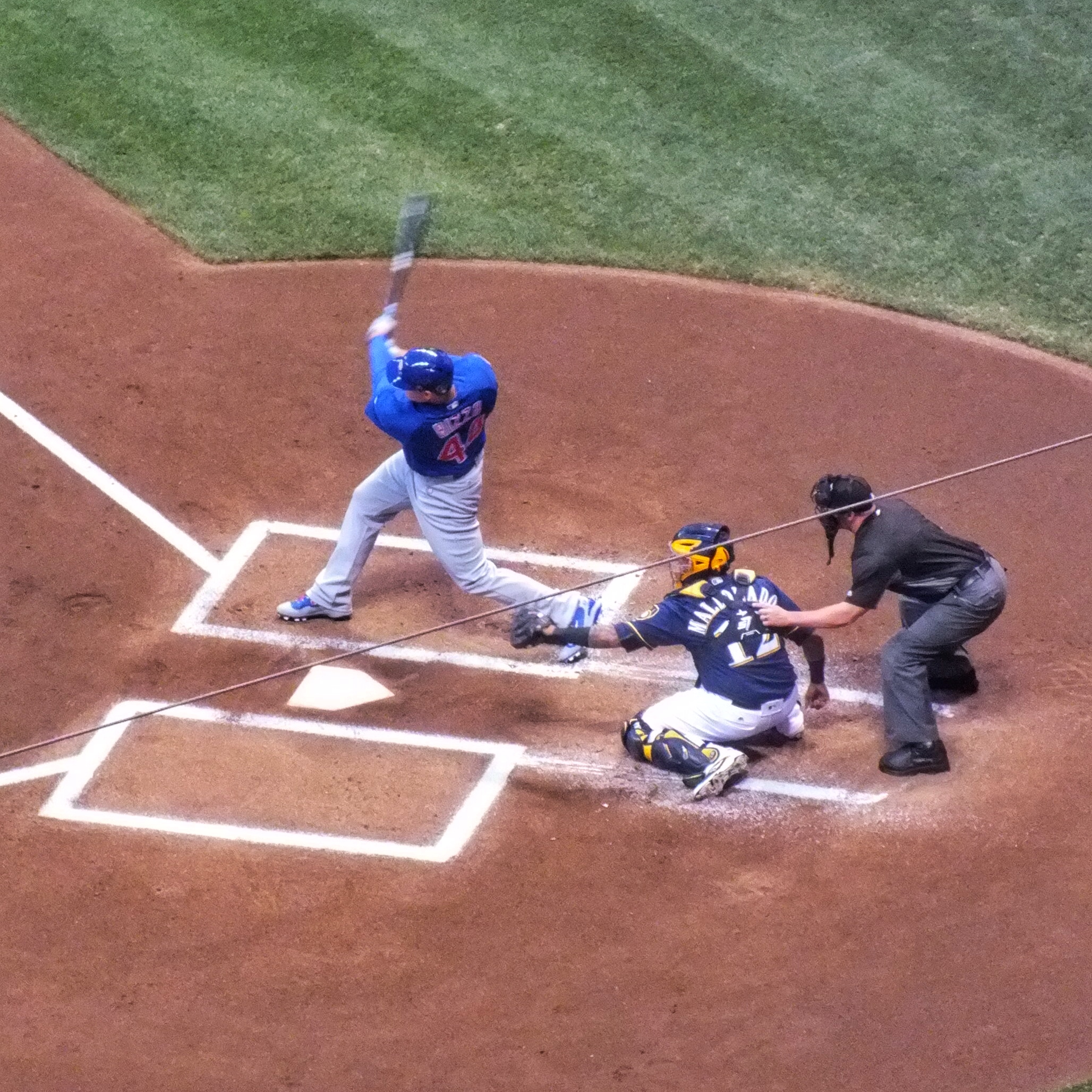 From there on, it was all downhill. Jason Hammel pitched for the Cubs and he did not have his good stuff. His first pitch in the bottom of the first was hit for a home run by Jonathan Villar. Tommy LaStella at third fumbled a ground ball that should have been a double play (although it was scored a hit). In the photo below,  the bases are loaded with Domingo Santana at the plate. He singled to drive in two. Five Brewers scored before the inning was over as the Brewers sent 10 batters to the plate. 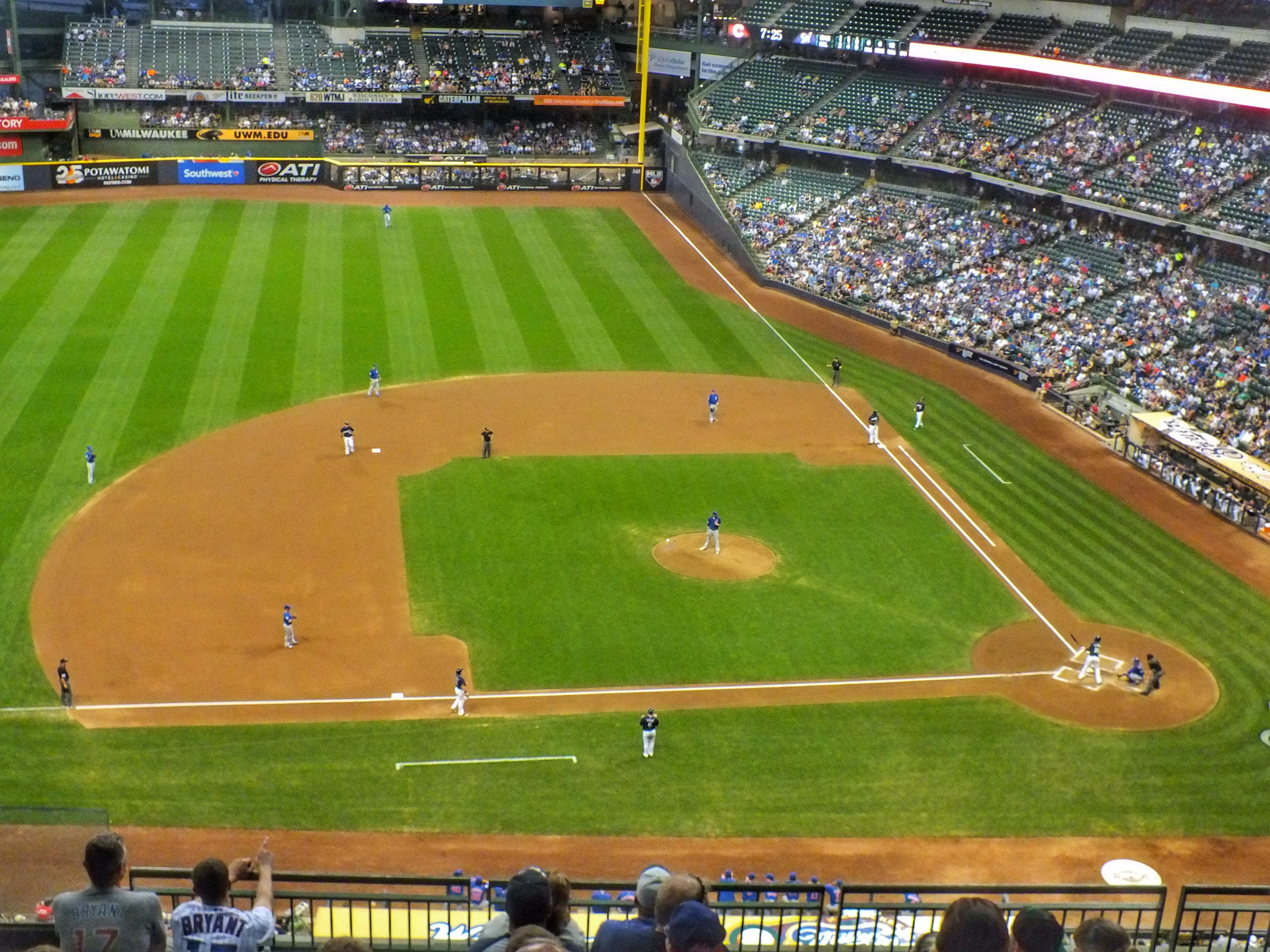 In the top of the second, Miguel Montero hit a solo home run to make it 5-2 and the Cubs fans in the stands were given a little hope. Here he is rounding third. 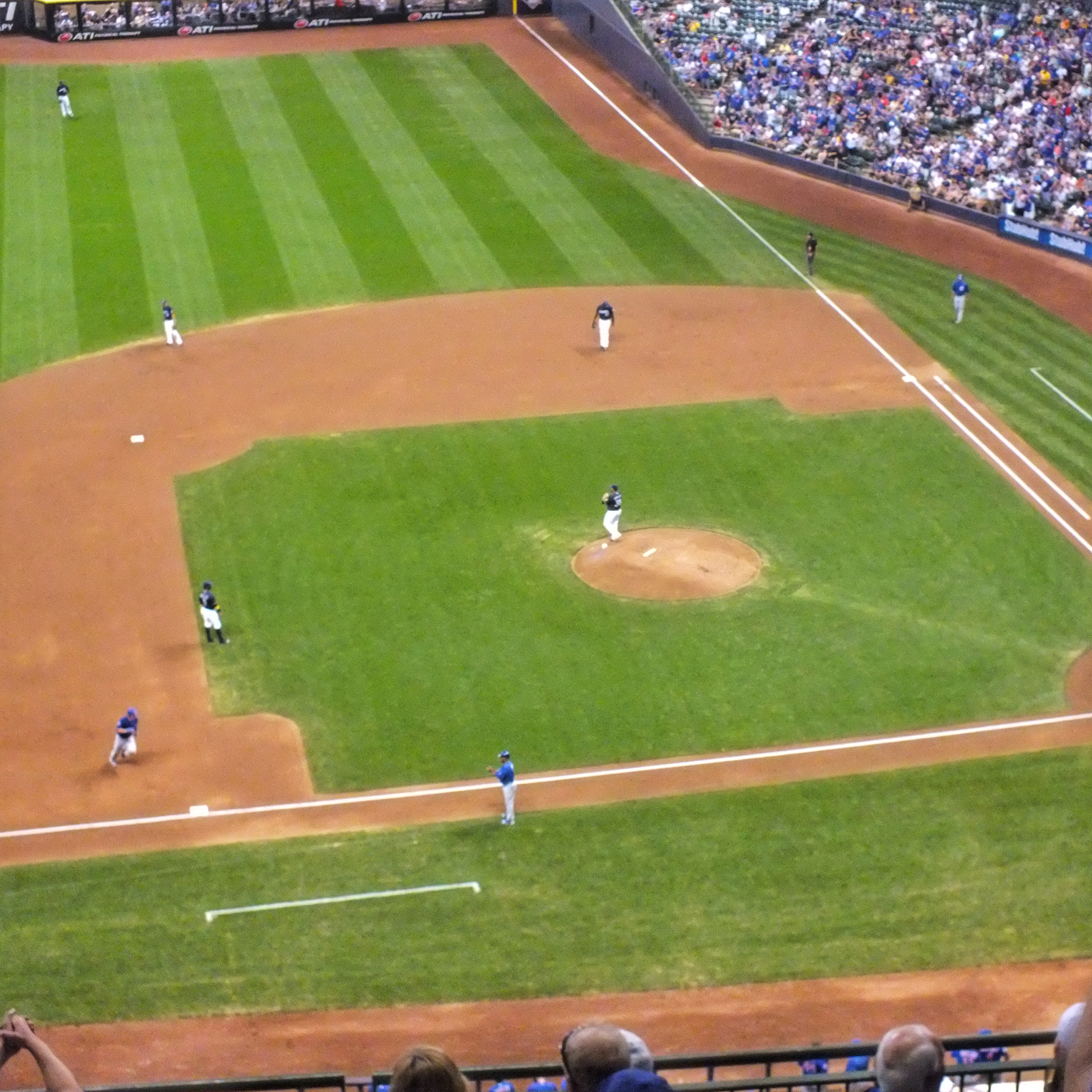 Milwaukee scored again in the fourth to go up 6-2, but I still felt like the Cubs could make a game of it. Until the sixth when Ryan Braun hit a three-run home run off Hammel who was still, inexplicably, in the game. But not for long. 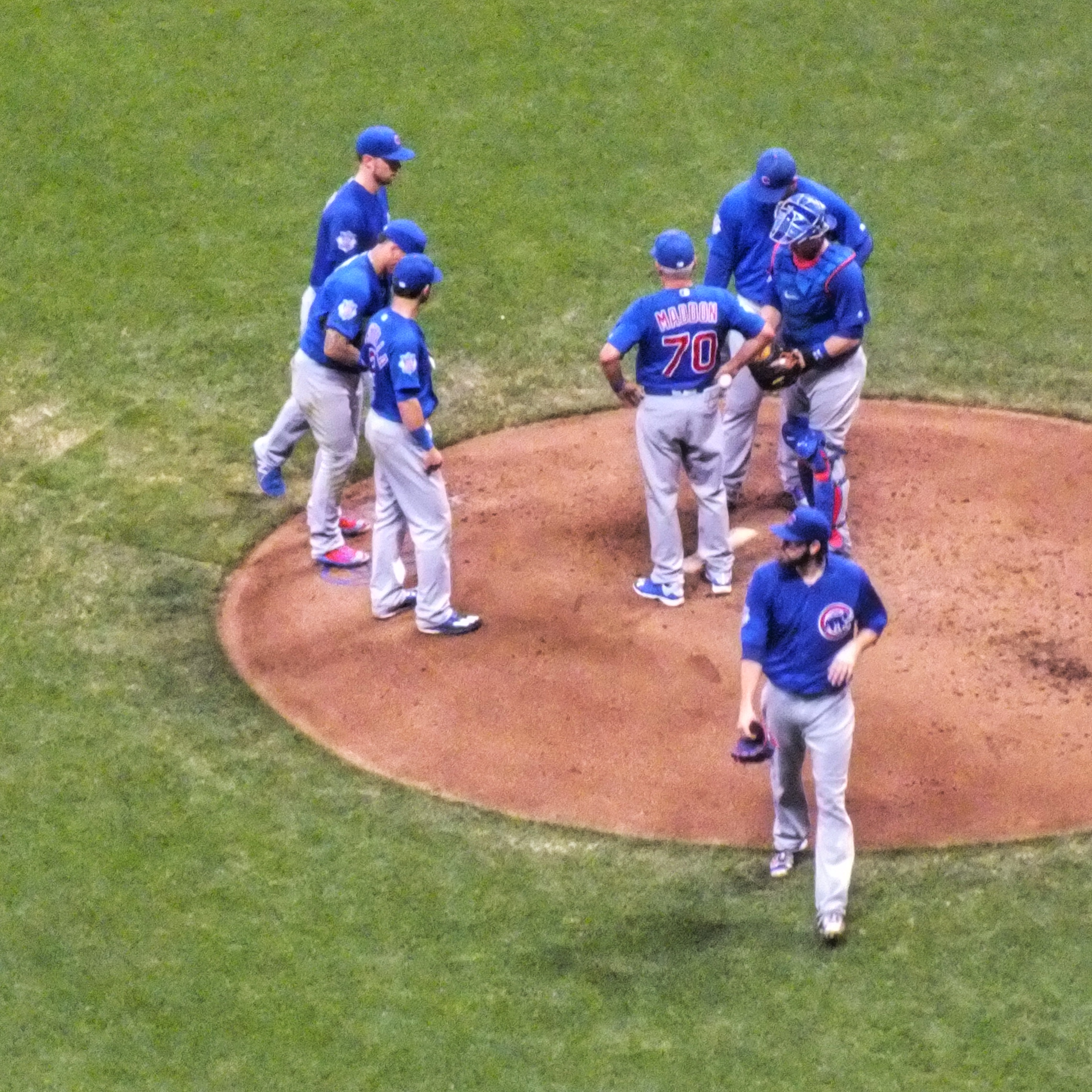 The Sausage Race took place after the sixth. The hot dog won going away.

Rizzo homered again in the eighth — hitting the right-field foul pole. Here he is being congratulated by Ben Zobrist who had doubled in front of him. That made it 10-4, Brewers. 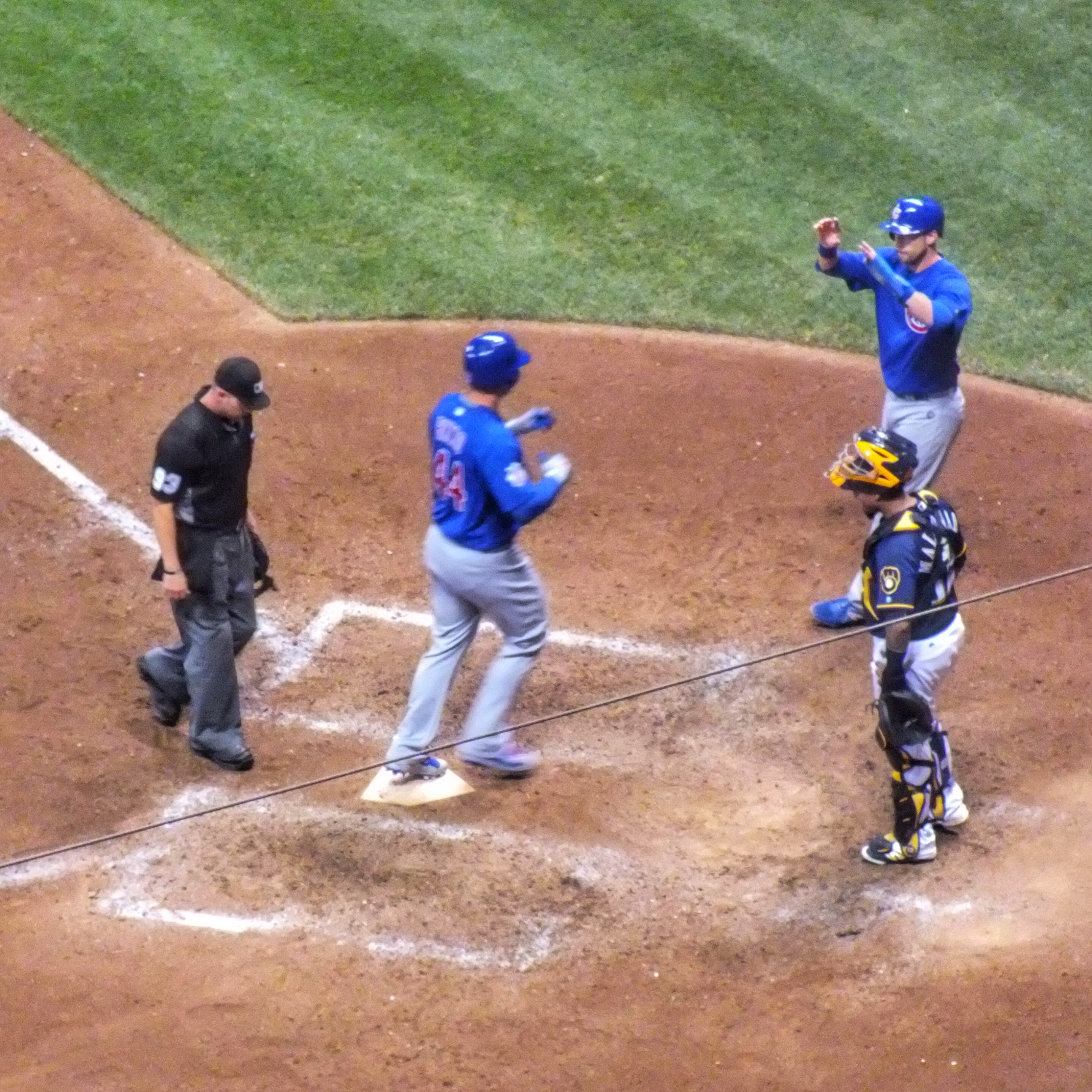 The Brewers scored two more in the bottom of the eighth to make it 12-4 and most of the Cub fans left. We stuck it out to the very end. We got to see Albert Almora Jr. bat. 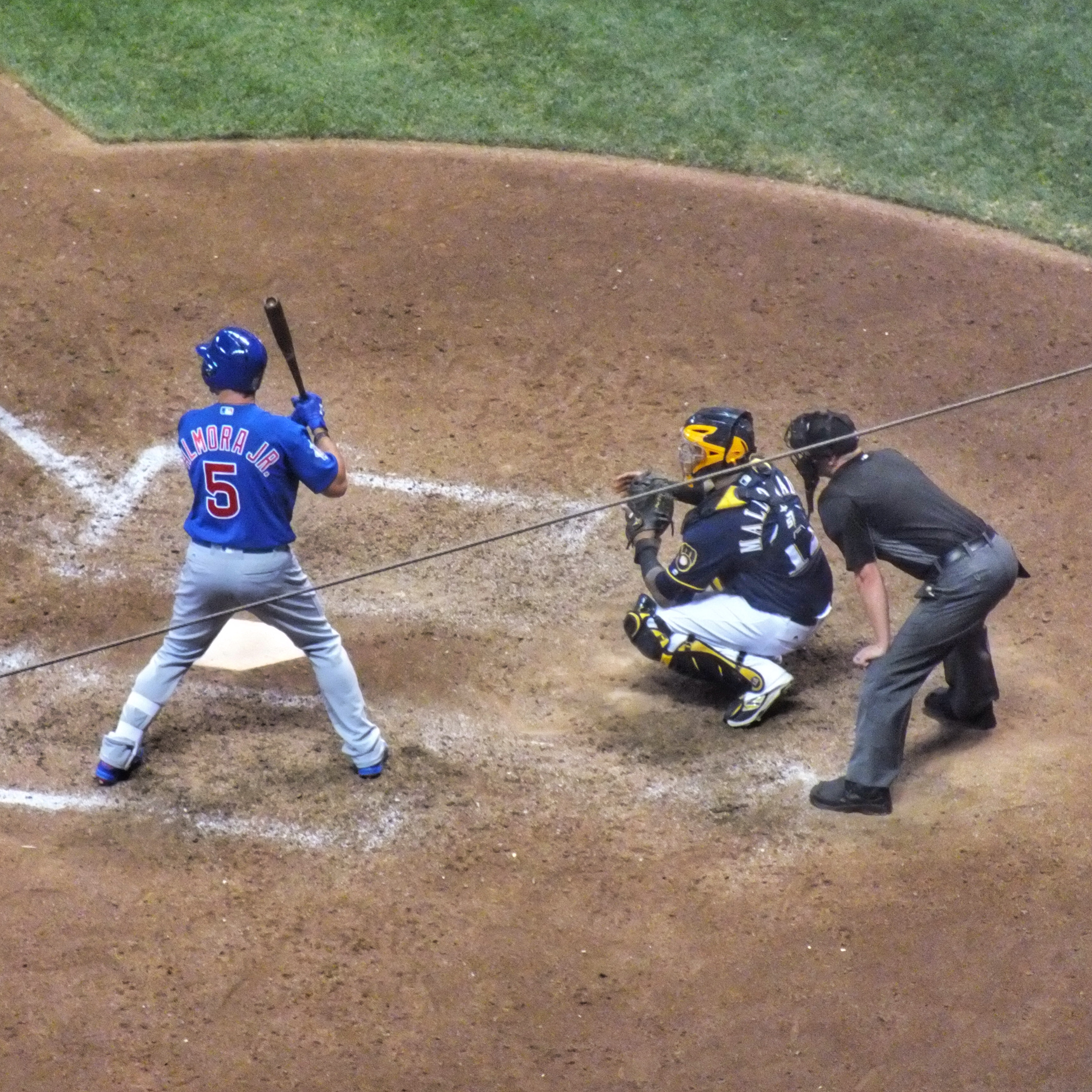 We also saw journeyman Munenori Kawasaki, just called up from the minors. He knows very little English but somehow manages to be one of the funniest guys in baseball. He managed to slap a double to left to score Montero who had doubled. 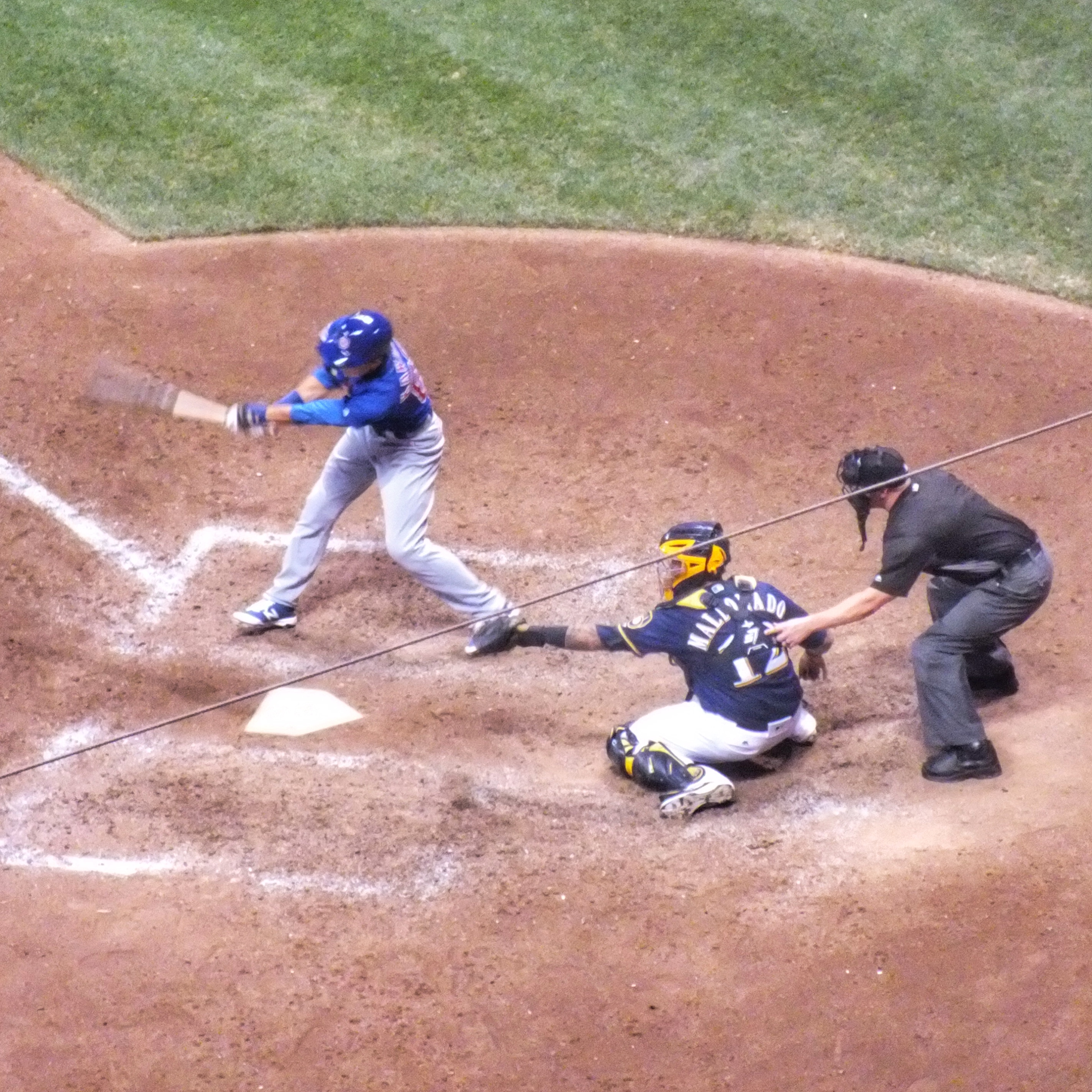 Here’s Kawasaki on second talking with Brewers’ shortstop Orlando Arcia who also speaks very little English. That must have been a fun conversation. 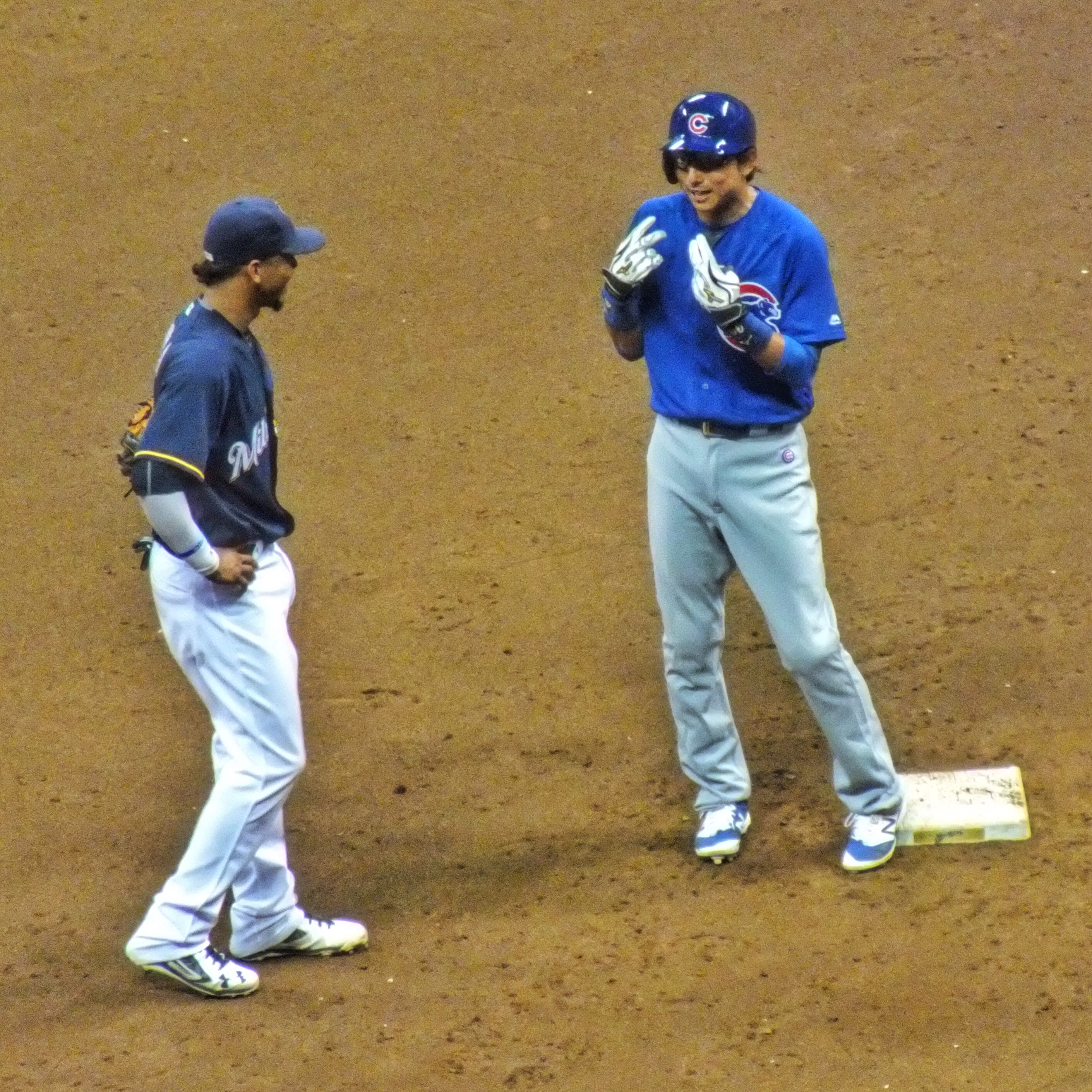 That was it. Brewers won 12-5. Cubs were sloppy, with a couple wild pitches and two (should be three) errors. 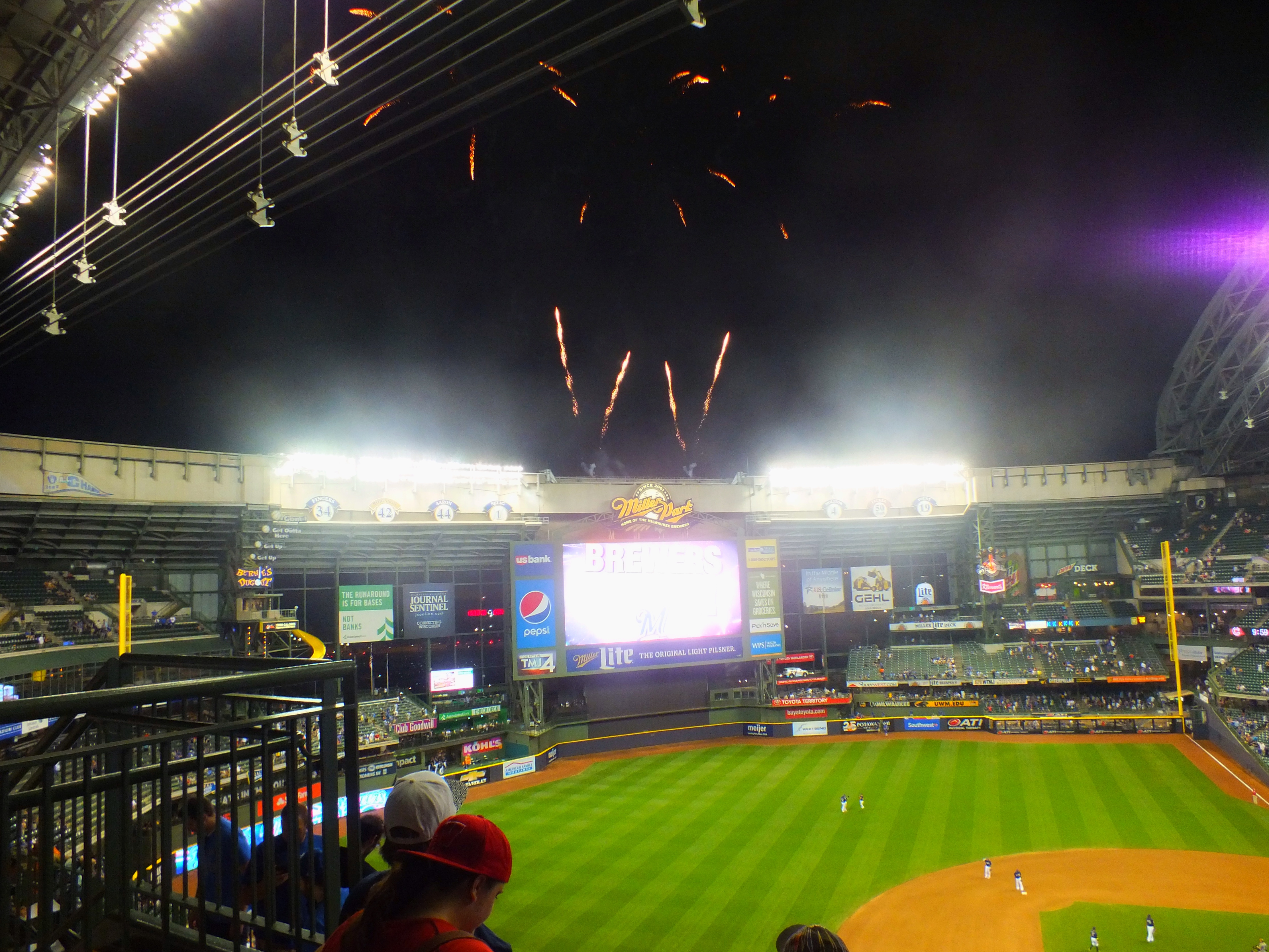 As we were walking through the parking lot, several Cub fans were singing “Go, Cubs, Go.” The man walking next to us with his wife said, “Do you think we’re the only four sober people in the lot?” I agreed that there was a good chance. 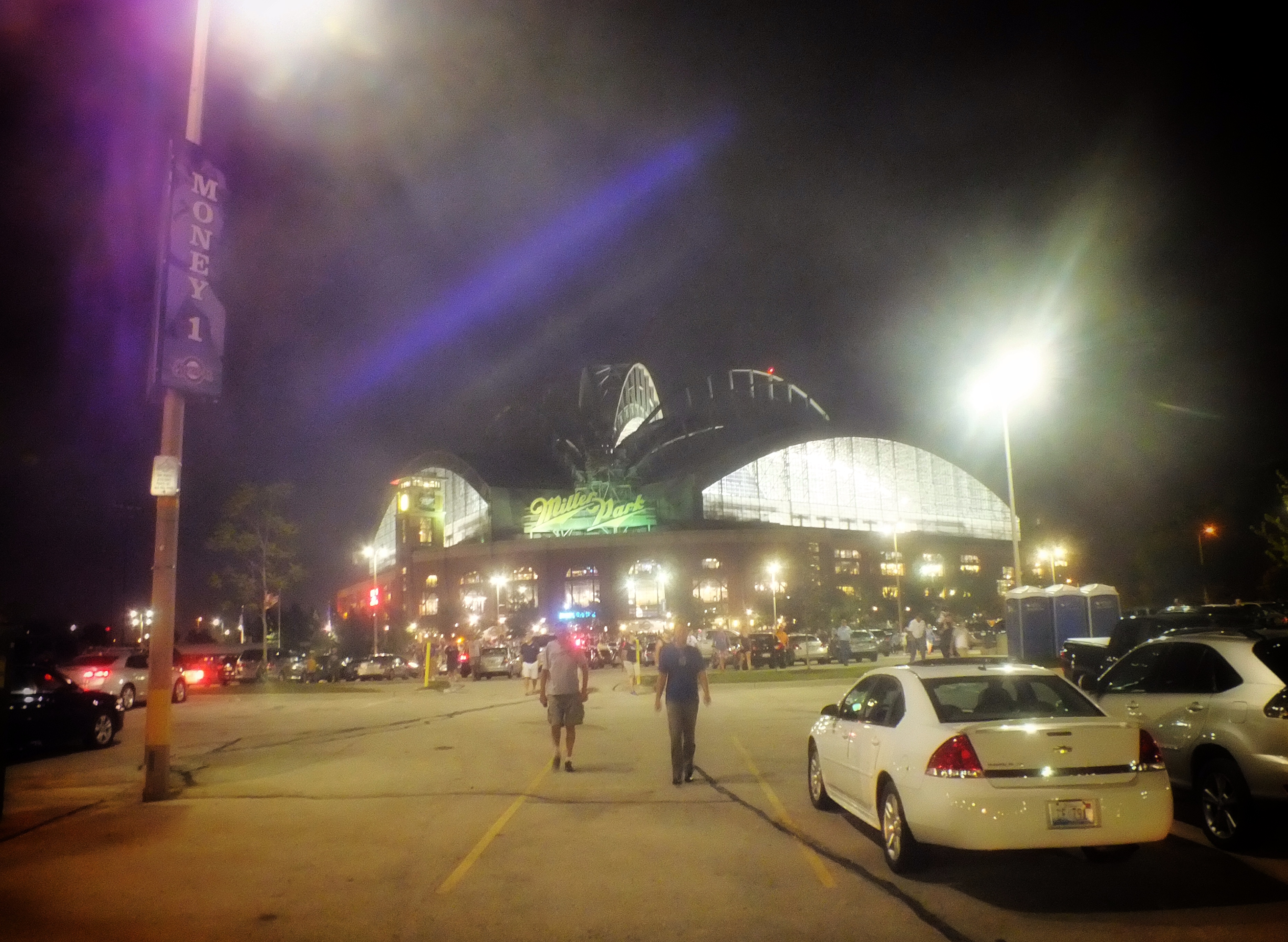 I had the red chair along but didn’t feel like taking it inside with me because it was so damp and miserable out. I settled for pre- and post-game shots on the roof of our car. 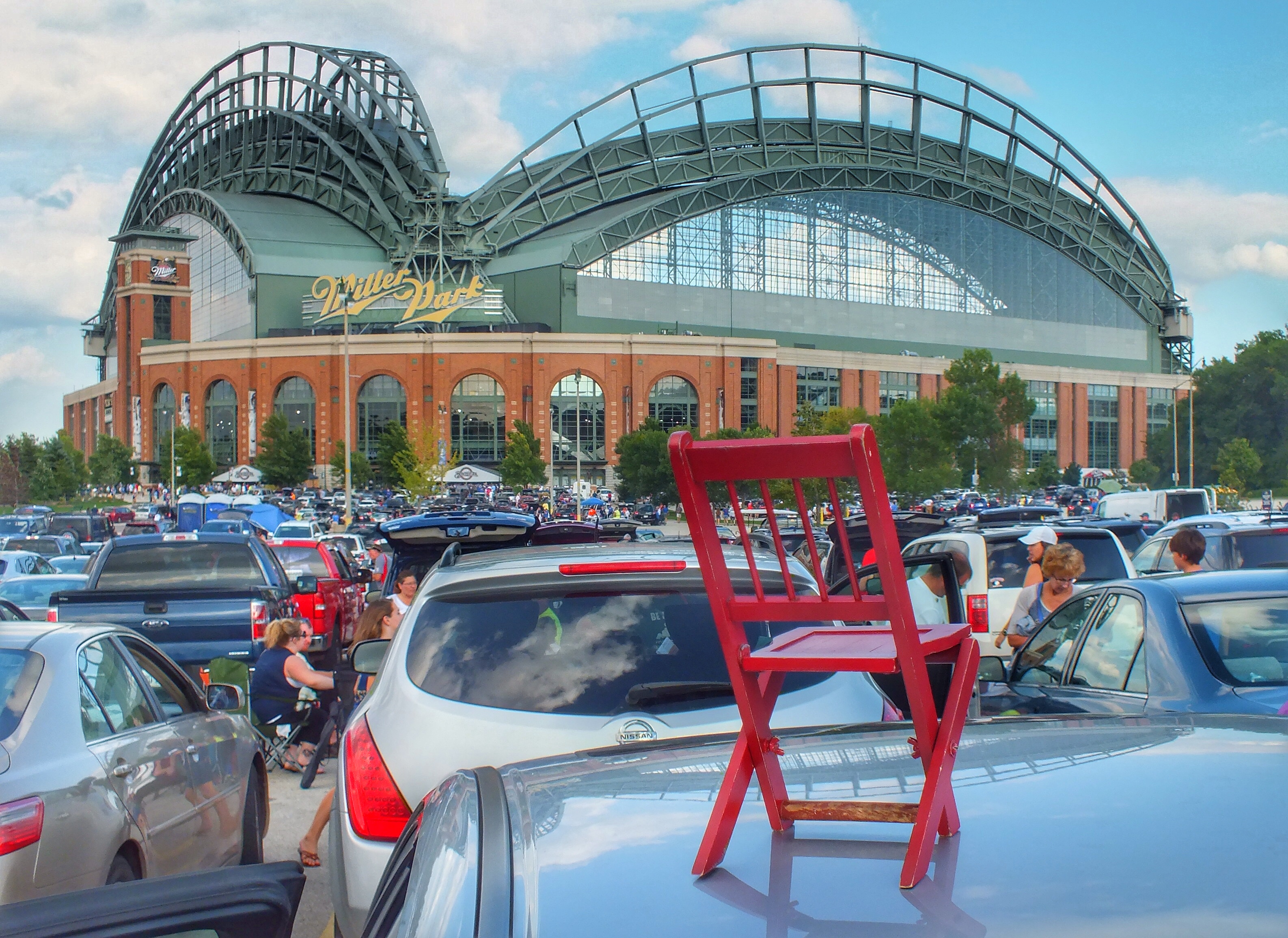 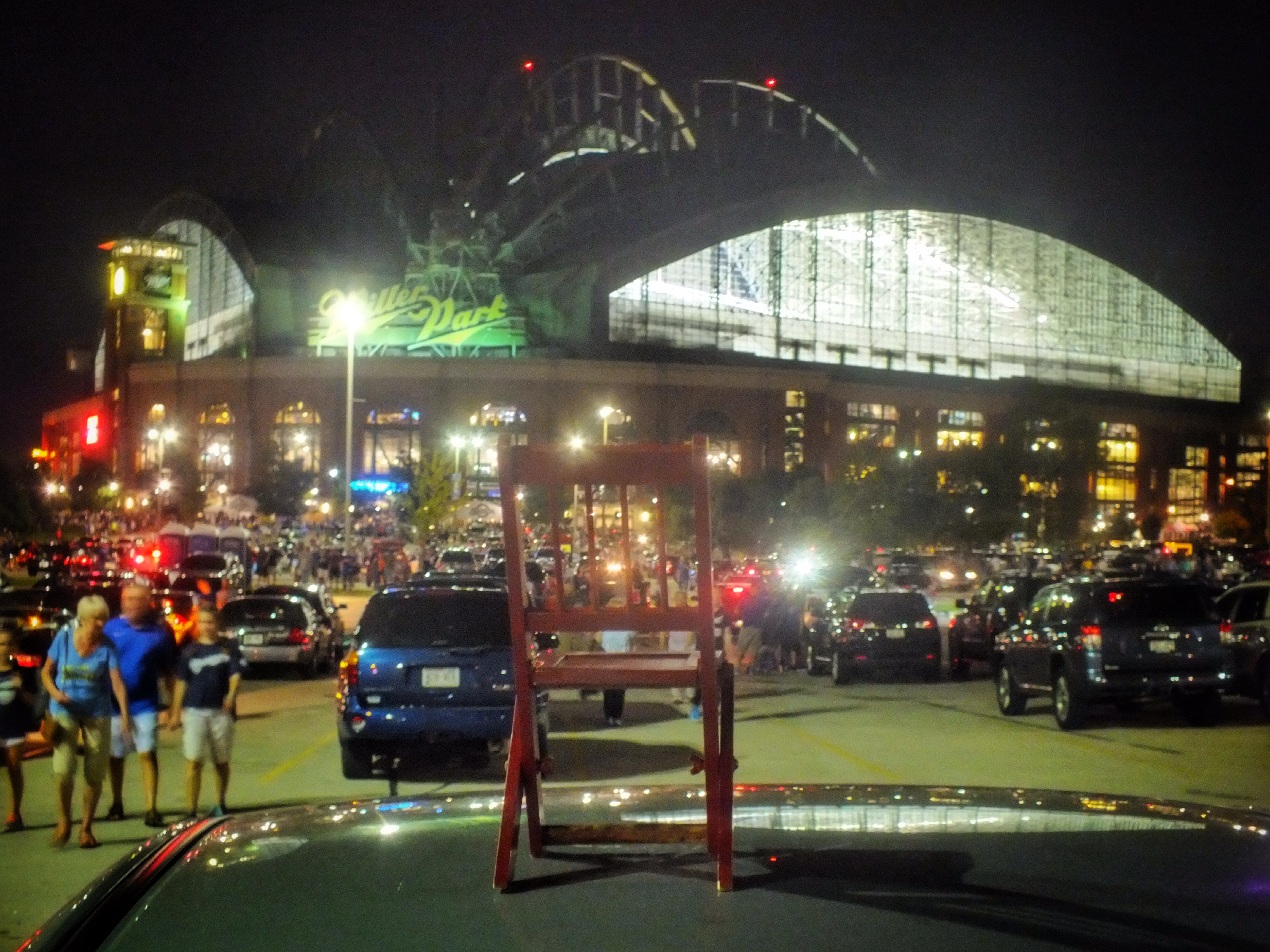 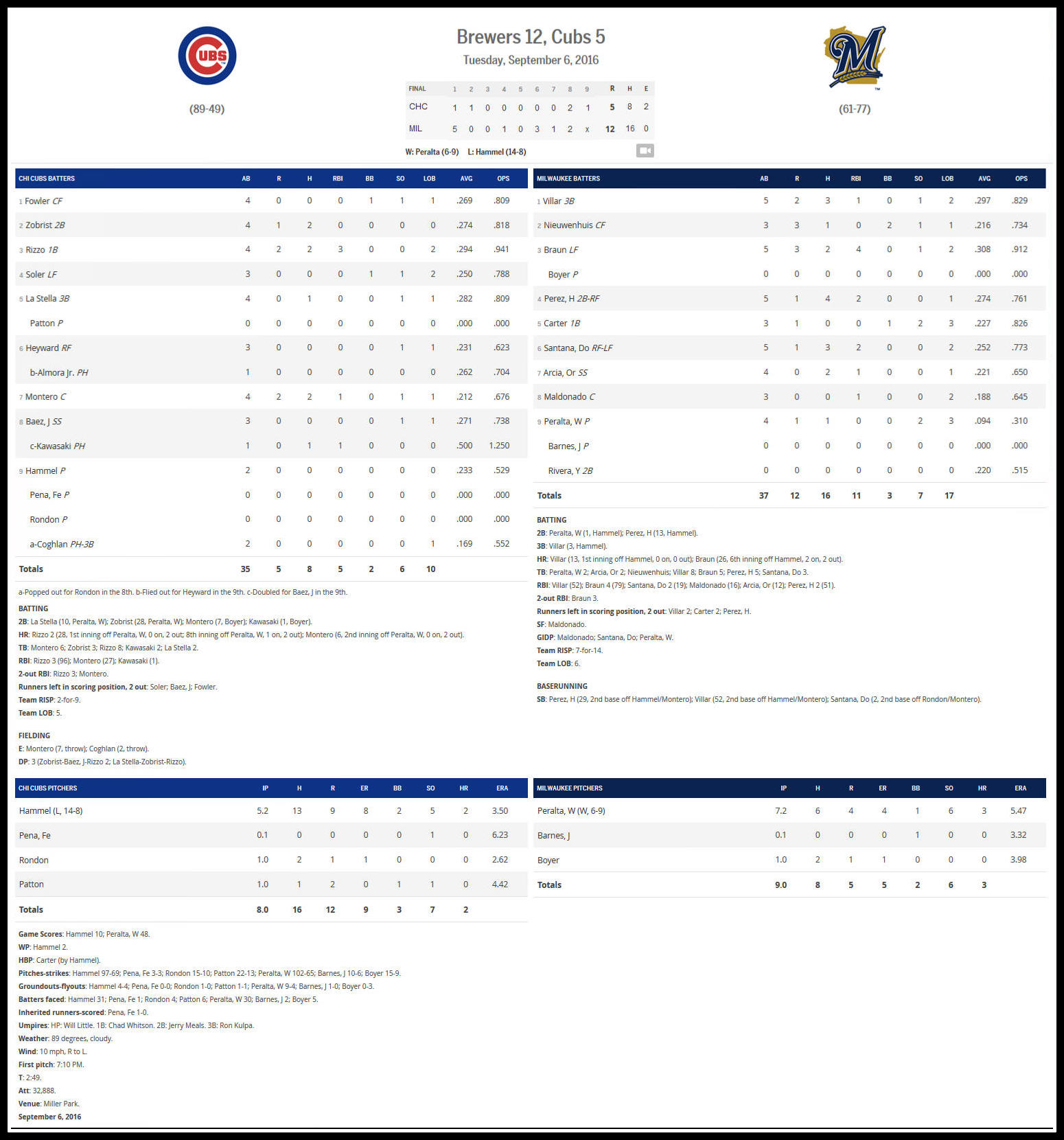 We got home at 11:30. It would have been nice if the Cubs had won, but we saw Rizzo hit two home runs and had a good time.