My sister called me on Wednesday evening and said friends of hers had given her a couple free tickets to the Cubs-Brewers game on Thursday afternoon and did I want to go? I had to rearrange my schedule a little. (Fortunately, I have a mother who understands when her son cancels a lunch date to go see the Cubs.)

I took the Metra train downtown, then walked to State Street and caught the Red Line subway/el to Addison Street, a block from the park. It took two hours and 45 minutes to get from my house to Wrigley. I waited by the Harry Carey statue outside the bleacher gate and ate one of the Blue Bunny ice cream bars that a pleasant young lady was handing out for free. 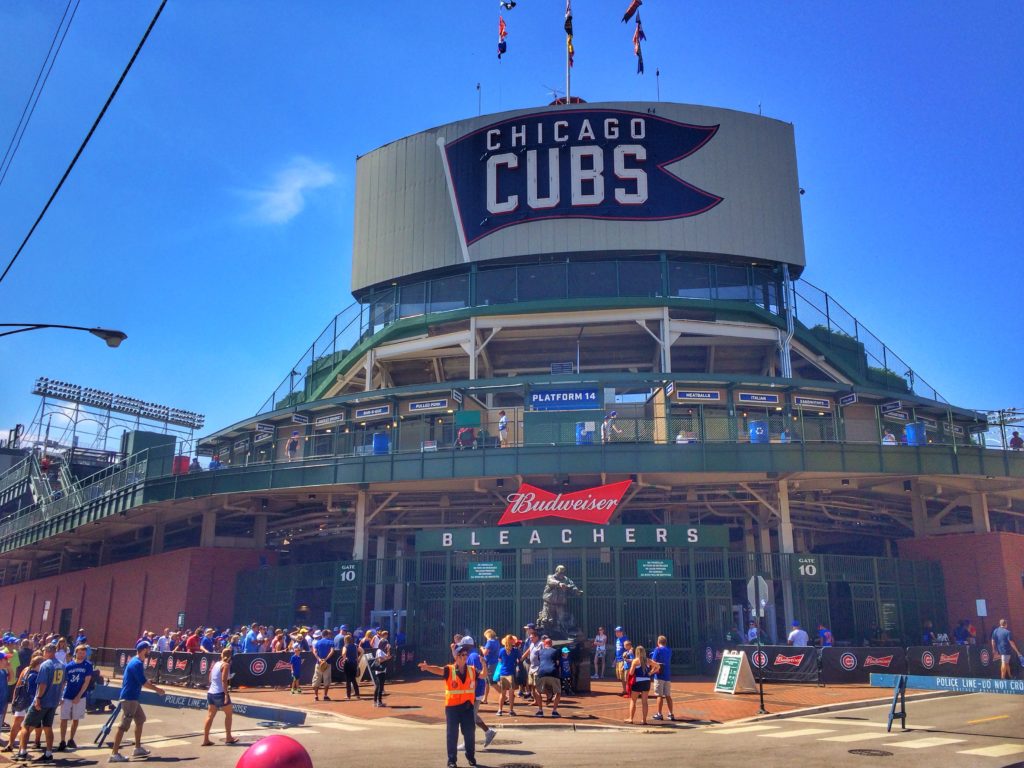 When my sister and her friends arrived, we headed to our seats.  We were one section over — maybe 40 feet — from where I sat for the first game of this home stand. It was a hot day — the temperature/humidity index sat at 90º — and there wasn’t much breeze where we were, but I was very glad we were out of the sun.

I purchased a hot dog, fries and a Diet Pepsi. I expect to pay more at the park, but this was ridiculous. 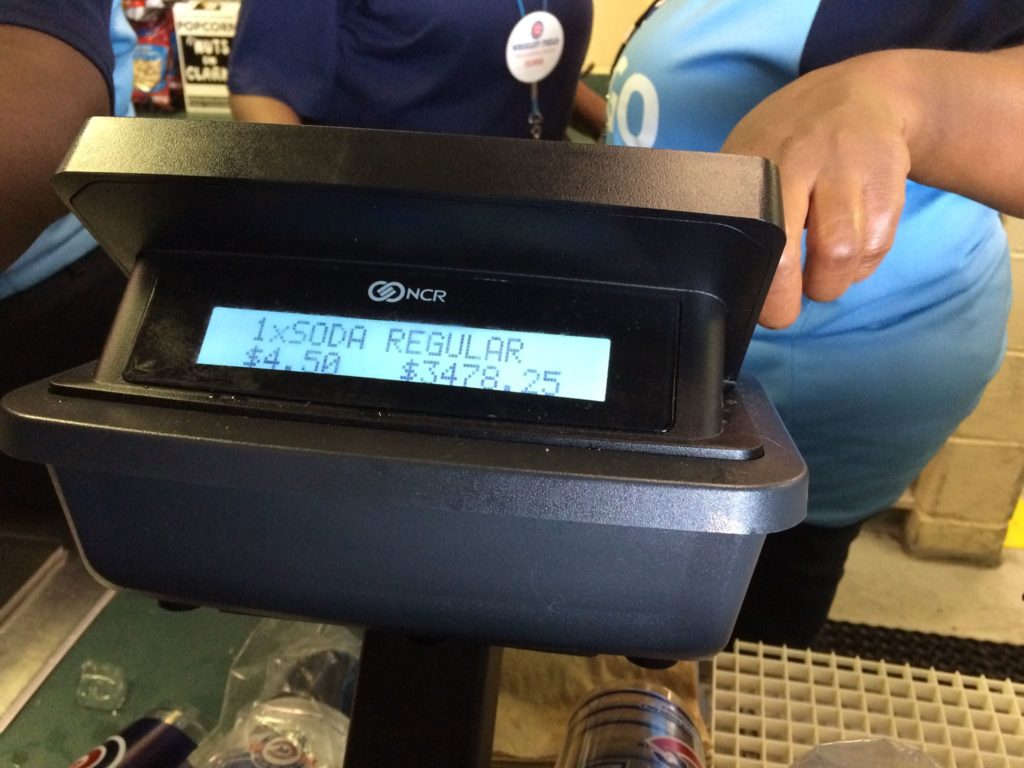 The Air and Water Show was taking place on the lake front a couple miles away. A Navy team parachuted into the park during the National Anthem. 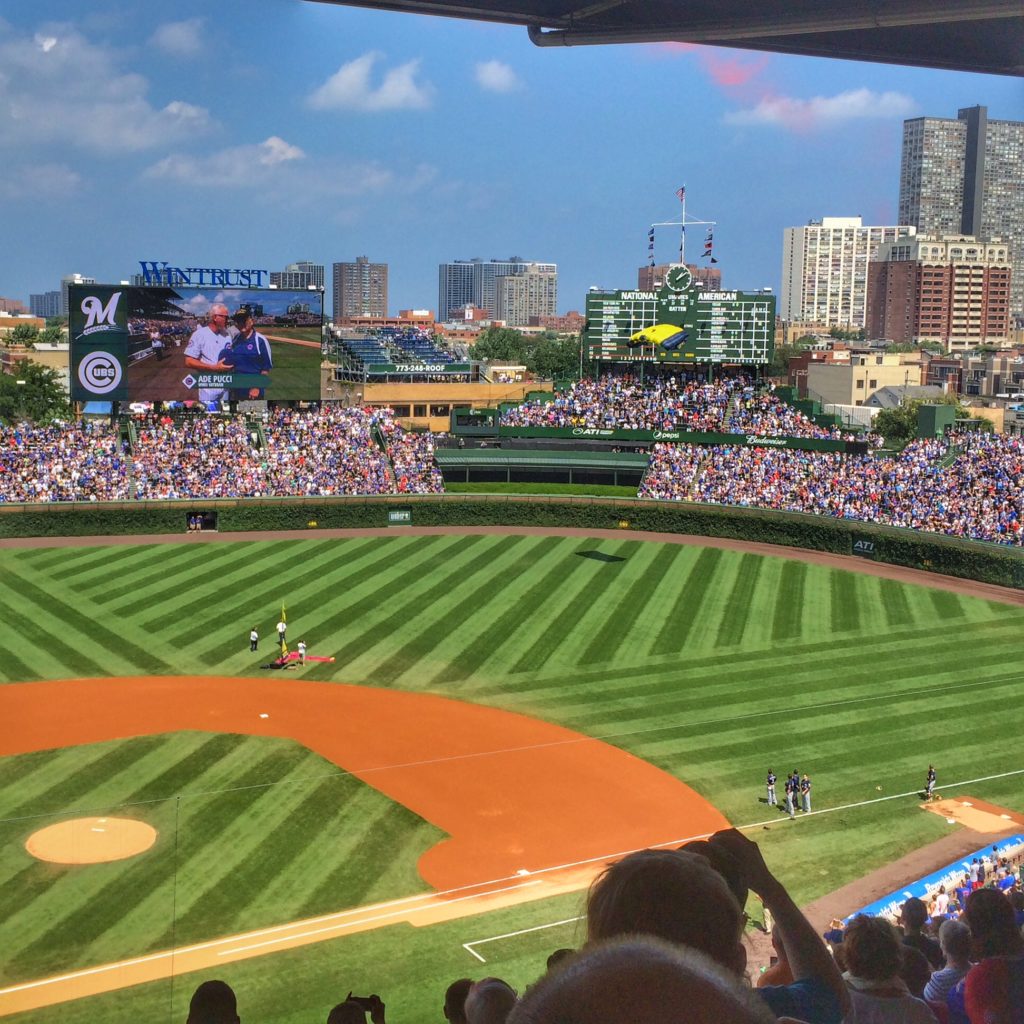 The Cubs, who had won the first three games in the series, got off to a good start in this one, with two runs in the first. Kris Bryant singled and scored.

In the third, Bryant hit a long home run to left, driving in Matt Szczur. Here he is approaching third. 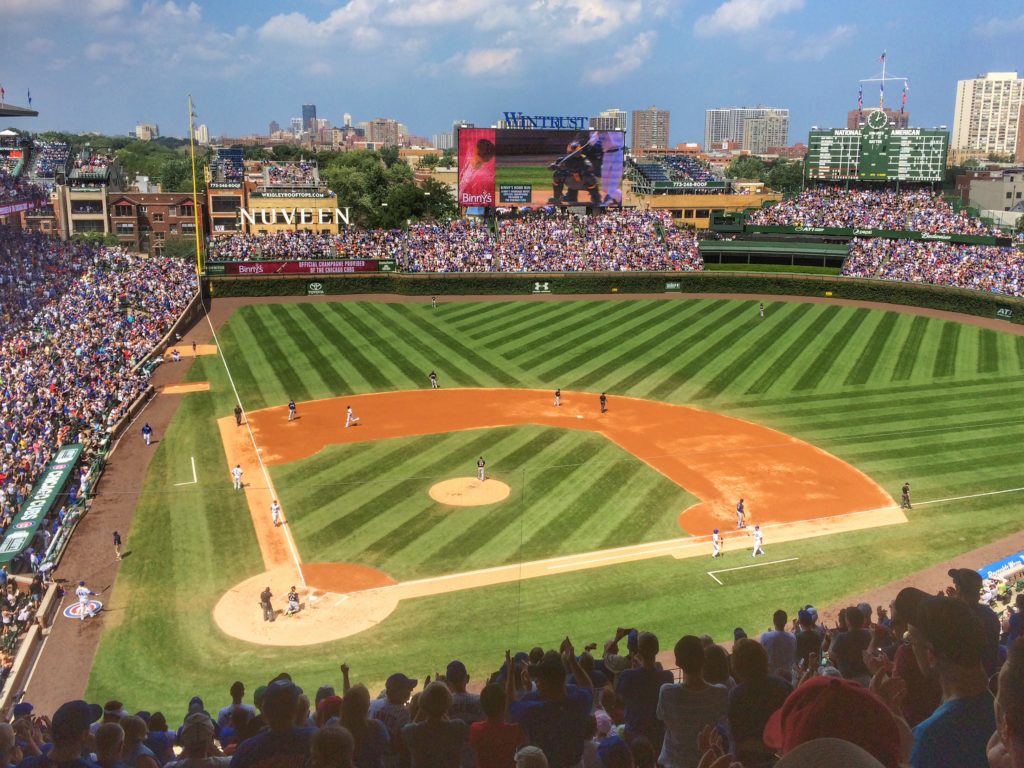 A walk and a couple hits resulted in another run. Cubs were up 5-0 and it looked like a cake walk.

The couple in the seats next to me sat down in the third inning and left about six minutes later, never to return.

Jake Arrieta had a no-hitter two outs into the fourth, but he walked two batters and then gave up a home run to Kirk Nieuwenhuis and suddenly it was a game again.

Not to worry. The Cubs came back with two in the bottom of the inning on back-to-back-to-back doubles by Szczur, Bryant and Rizzo. Here’s Bryant’s.

Arrieta walked two in the fifth but escaped without giving up any runs thanks to a pick off at first by catcher Willson Contreras. Arrieta then gave up a lead off homer to Hernan Perez to begin the sixth, walked two more Brewers and was out of the game after 5²⁄³ innings. (He walked seven in the game.) 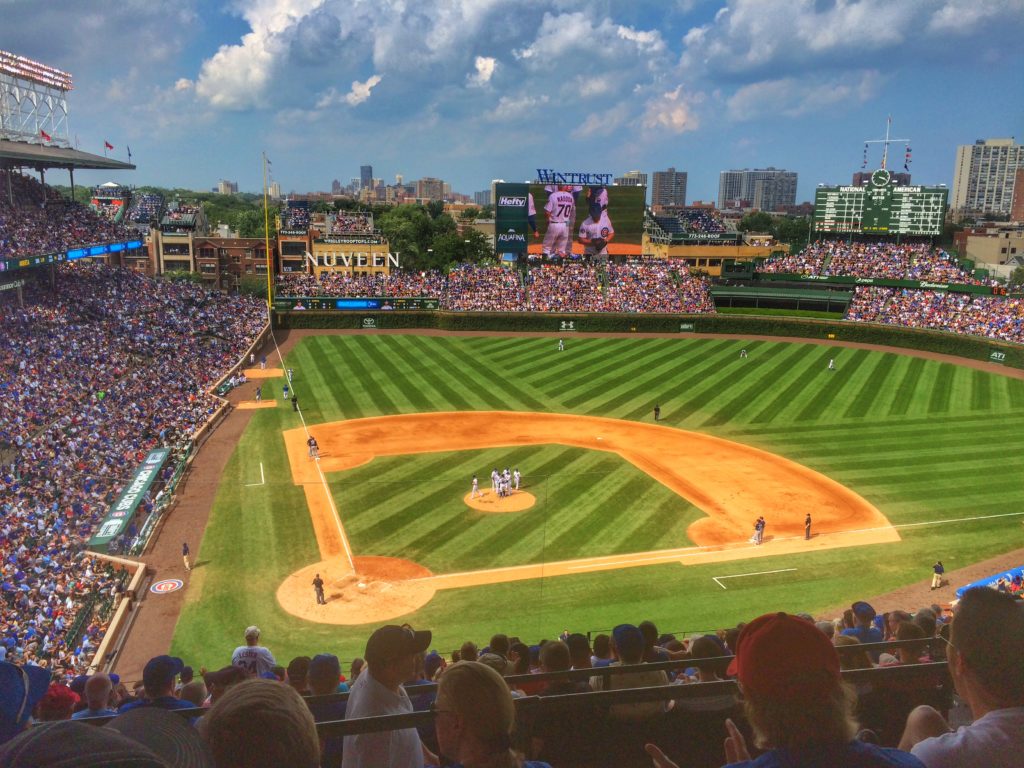 Spencer Patton entered and walked two more to score a run. It was now 7-5 and the Cubs lead didn’t seem very secure. Never fear. Bryant came up again and hit a homer to dead center. Here he is nearing home. 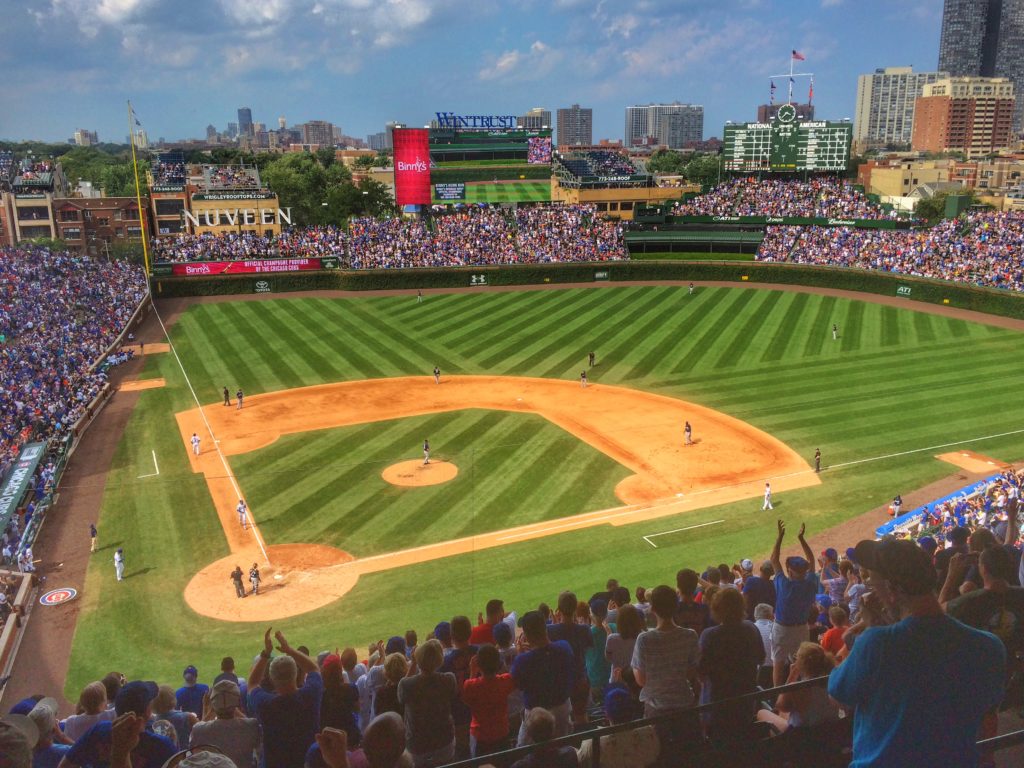 Both teams scored a single run in the eighth. Bryant drove in Baez with a single. It was his fifth hit in five at-bats, including two home-runs. This was historic. He had a three homer, two double game against the Reds earlier in the year. He is the first National Leaguer and only the second player ever to have two five-hit, two-homer games in a season. Only 17 players have two in their career. Here’s his final hit.

Aroldis Chapman came in for the save in the ninth. Here’s Nieuwenhuis grounding out to Rizzo on a 101 mph fastball to end the game followed by the post-game celebration and the raising of the “W” flag.

The game ended at 4:40, three hours and 21 minutes after it began. I headed off into the crush of people jamming onto the el. I detrained north of the river and walked along the new Riverwalk back to the station where I just had time to buy a bottle of pop and catch the express. I walked in the door of my house at 7:30, about as sweaty and sticky as a man can be. 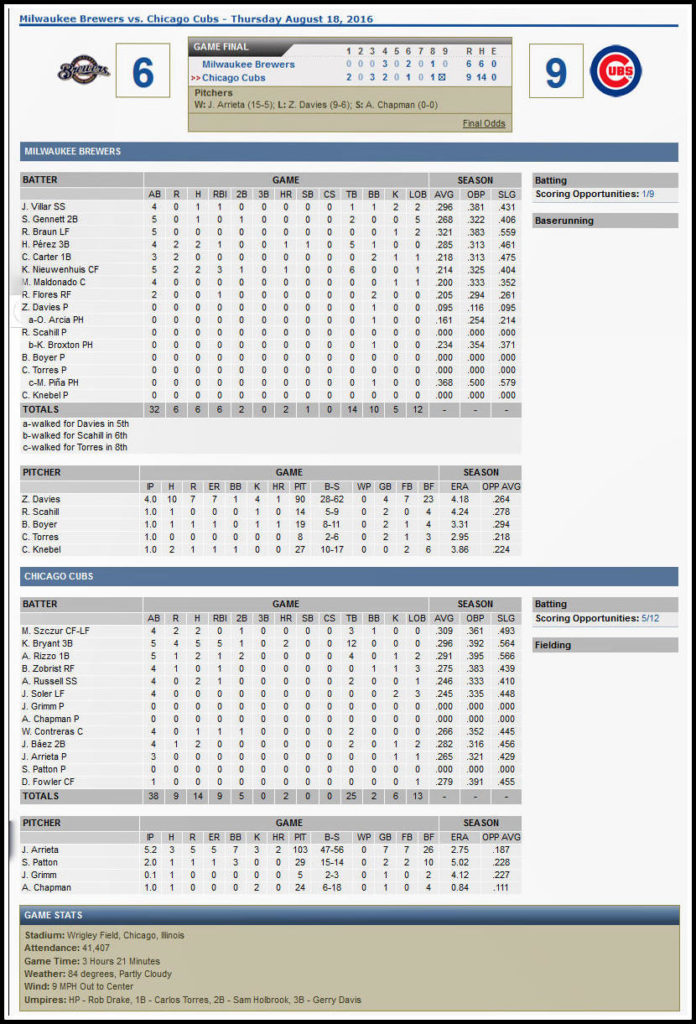