Although we knew it would be sobering, we decided to visit Dachau. 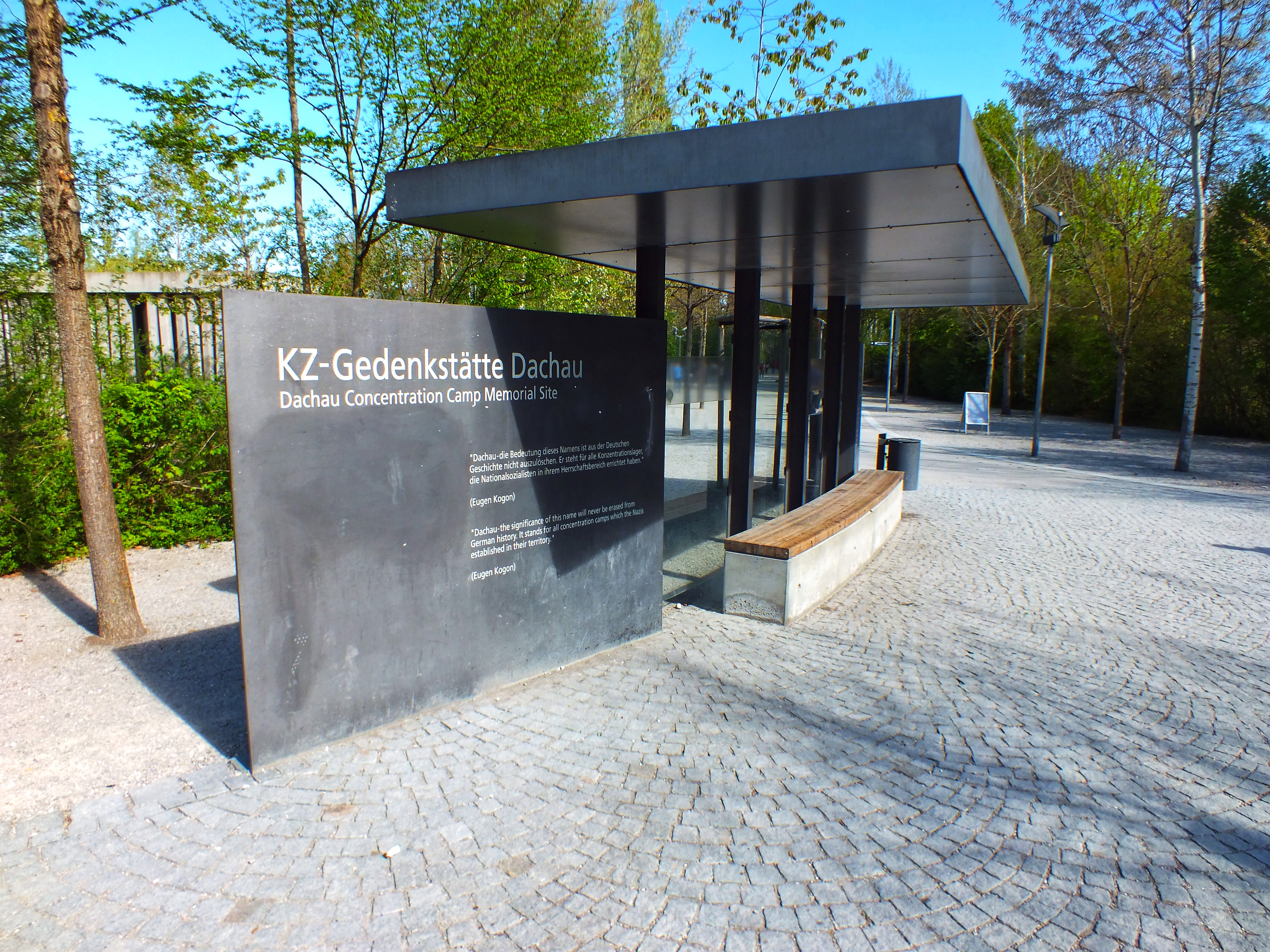 The memorial, which feels huge, only covers maybe a quarter of the war-period footprint. The rectangle in the far right, with the U-shaped building and the rows of barracks make up memorial 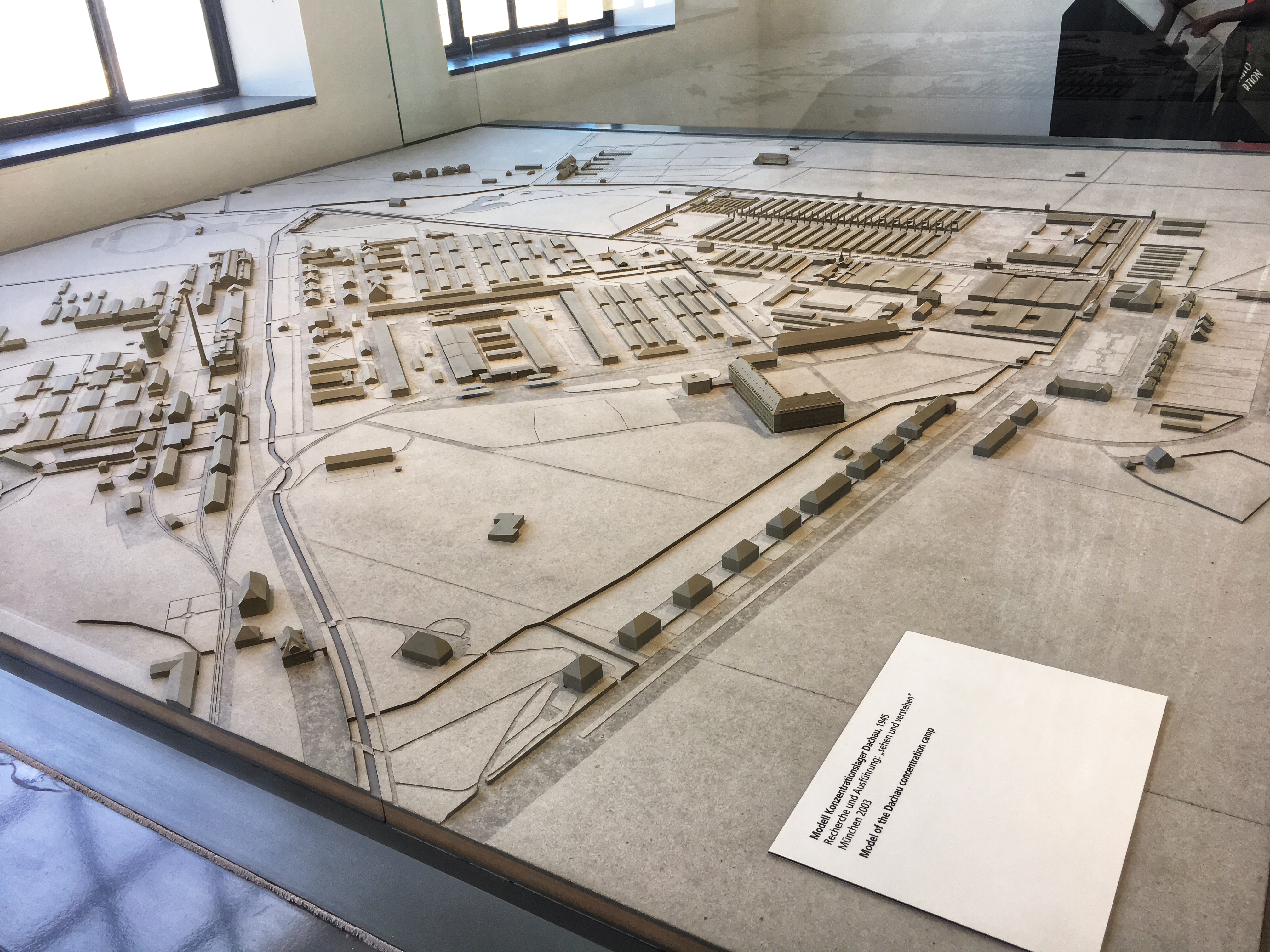 The camp was established in 1933 to house Hitler’s political opponents. It was used as a work camp and became the model for other camps who adopted the violent methods developed by the SS guards. Dachau was never primarily an execution camp, but of the 200,000 people sent here, more than 40,000 were murdered though outright violence or overwork.

This is the gate house. The original gate was stolen, then found and is on display in the museum. It says “Work sets you free,” a Nazi lie to convince arriving prisoners that they had some control over their fate. 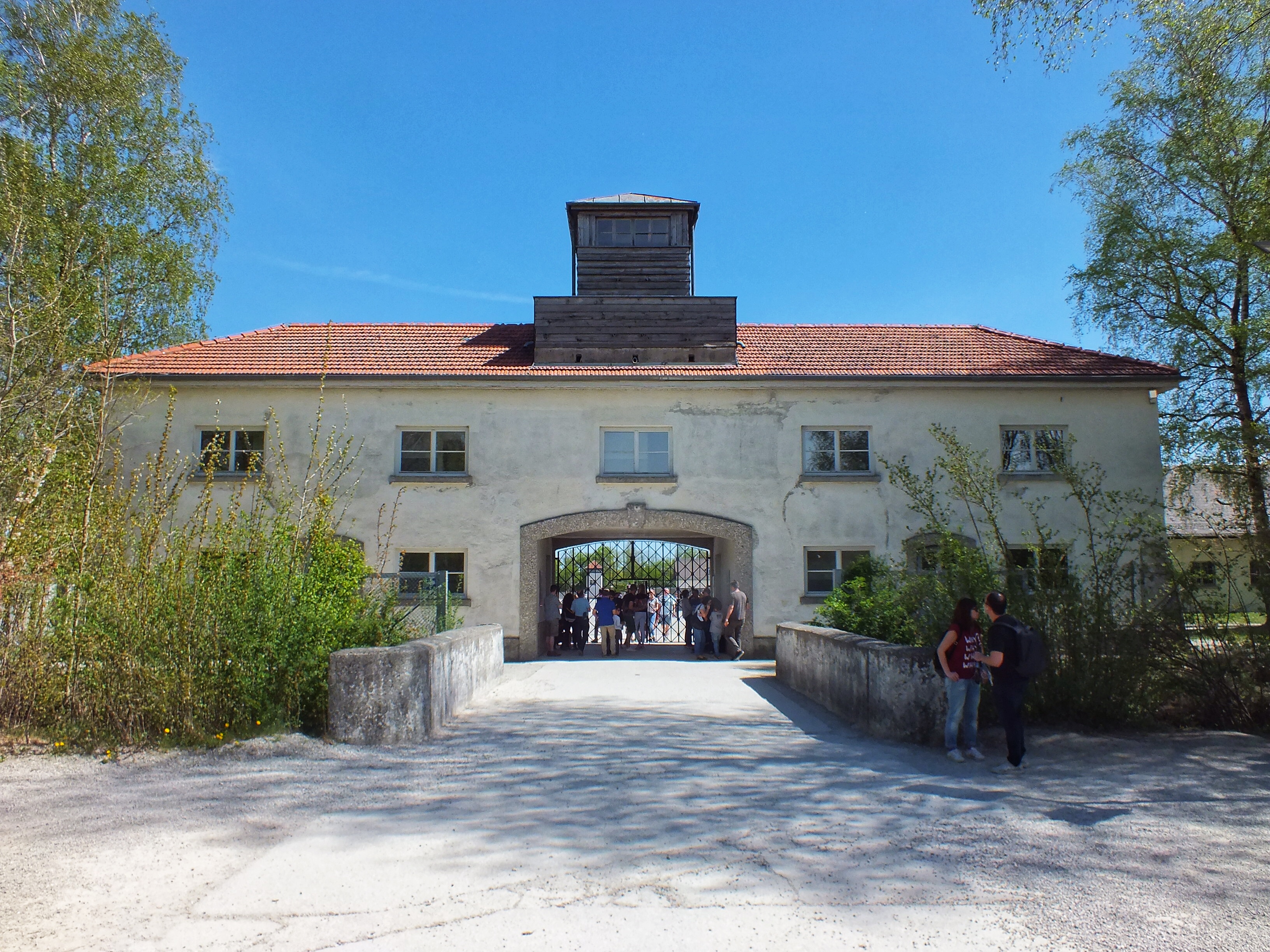 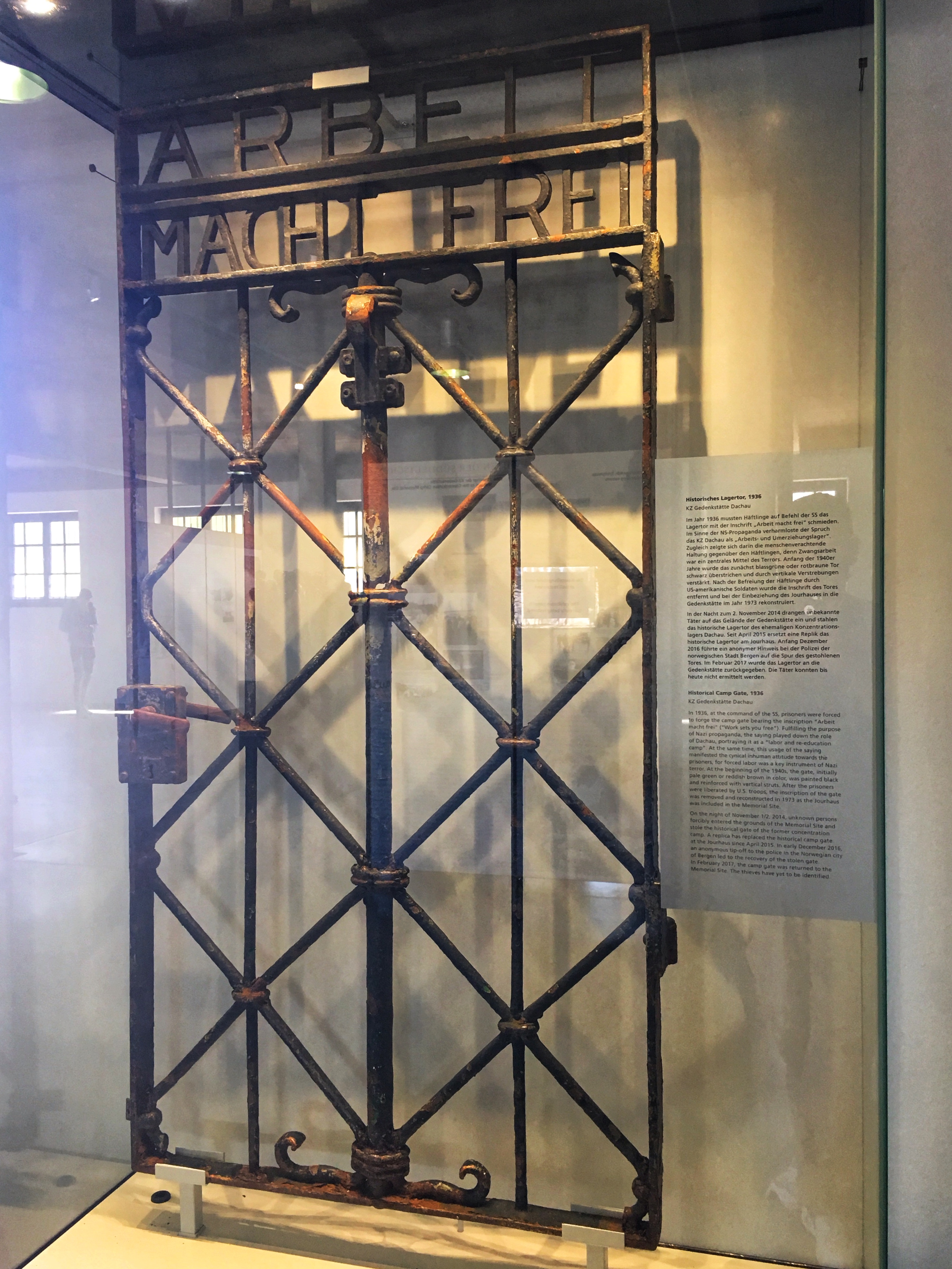 The large maintenance building houses a museum. It’s the building that surrounds my location in the photo below. Some rebuilt barracks can be seen in the distance.

This is the room where arriving prisoners were made to surrender all their belongings. 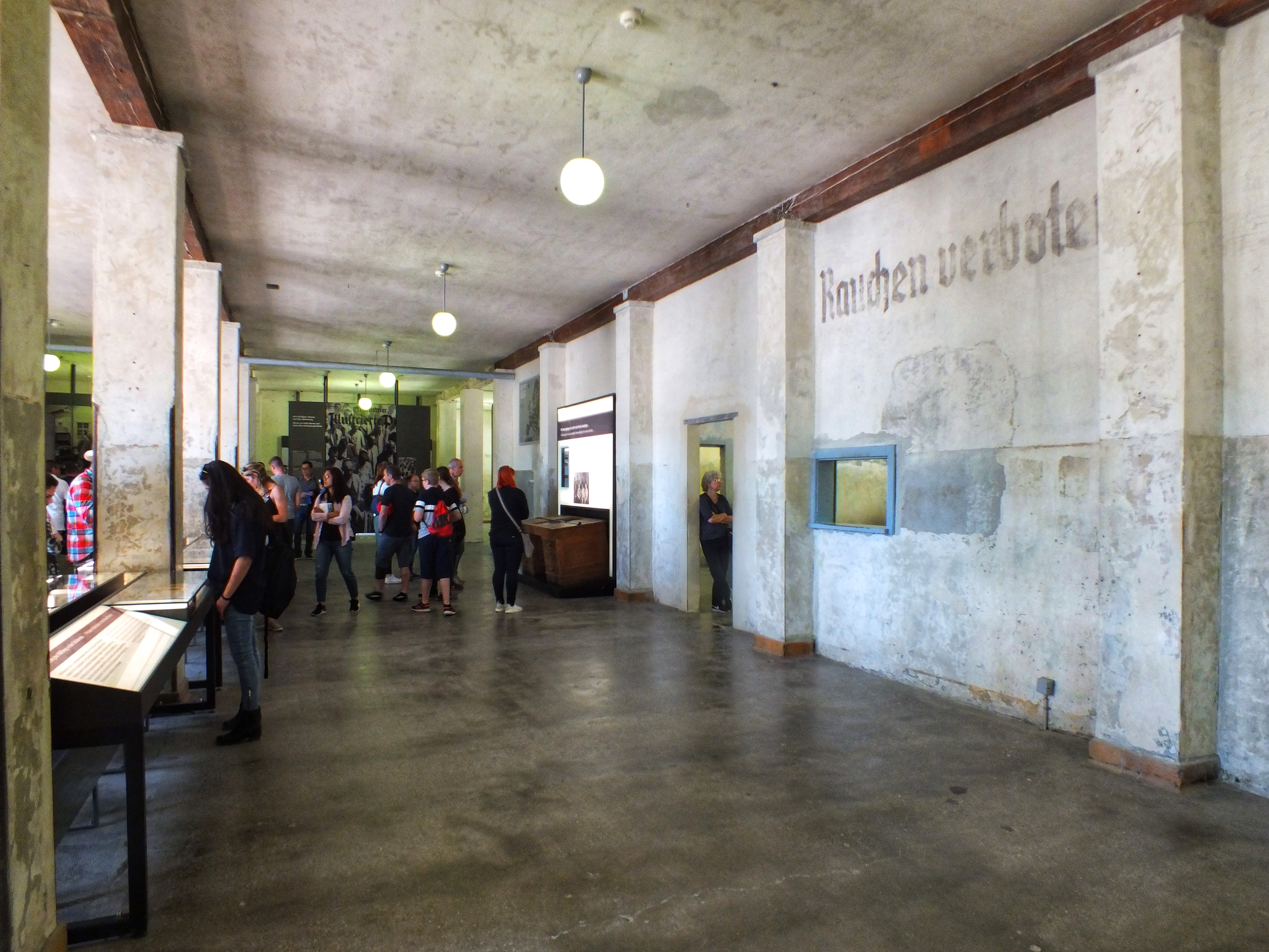 The museum went on for room after room. There were some artifacts, but mostly it signboards with pictures and history. It wasn’t very well curated. It seemed design to fill the massive amount of space rather than tell a concise history. After a while, I found myself reading the same information three and four times. There was a decent size crowd, but it wasn’t packed. 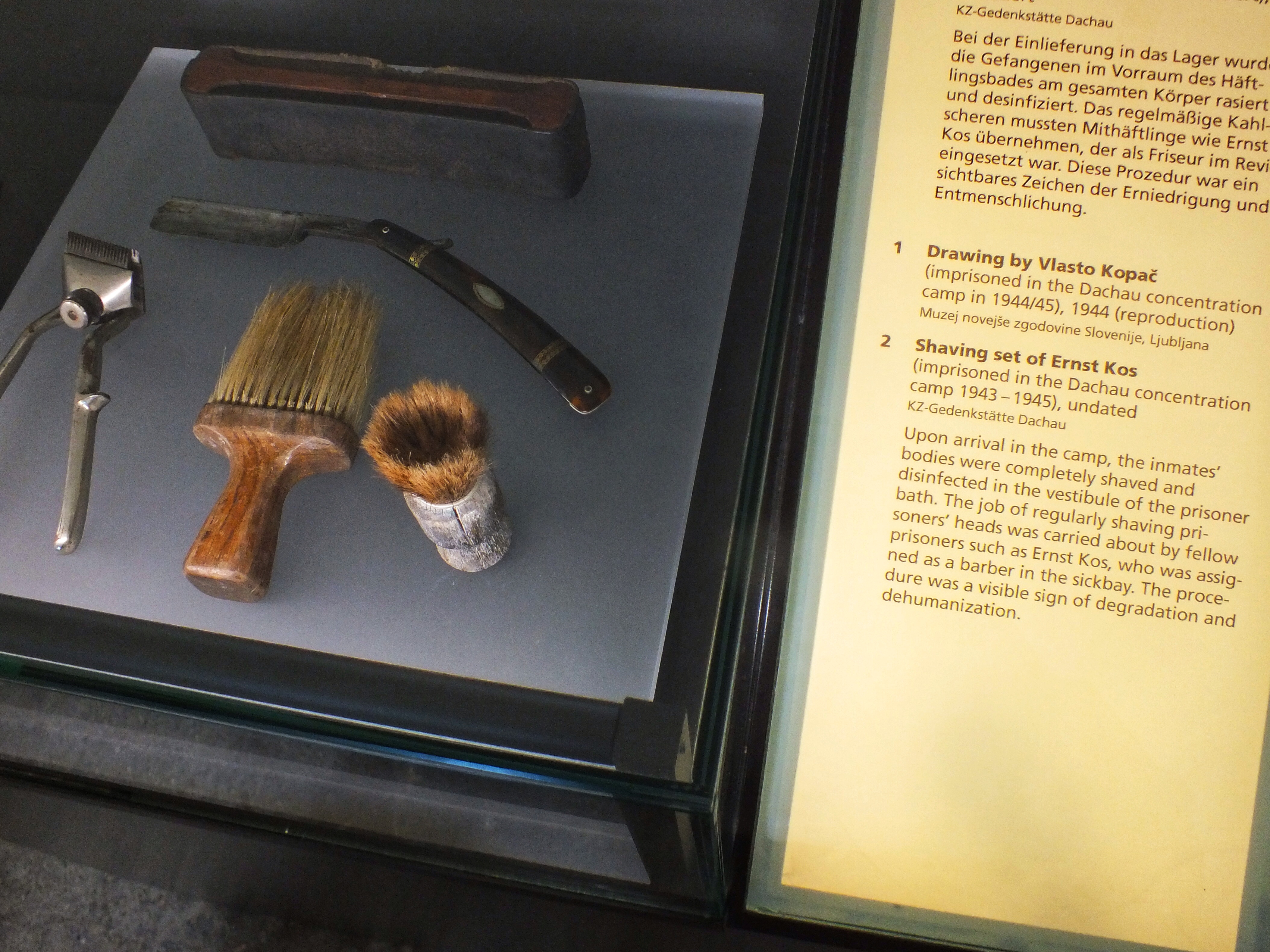 A rebuilt section of the wall around the camp. Many prisoners entered the forbidden zone, not as an attempt to escape but so that they would be shot and put out of their misery. 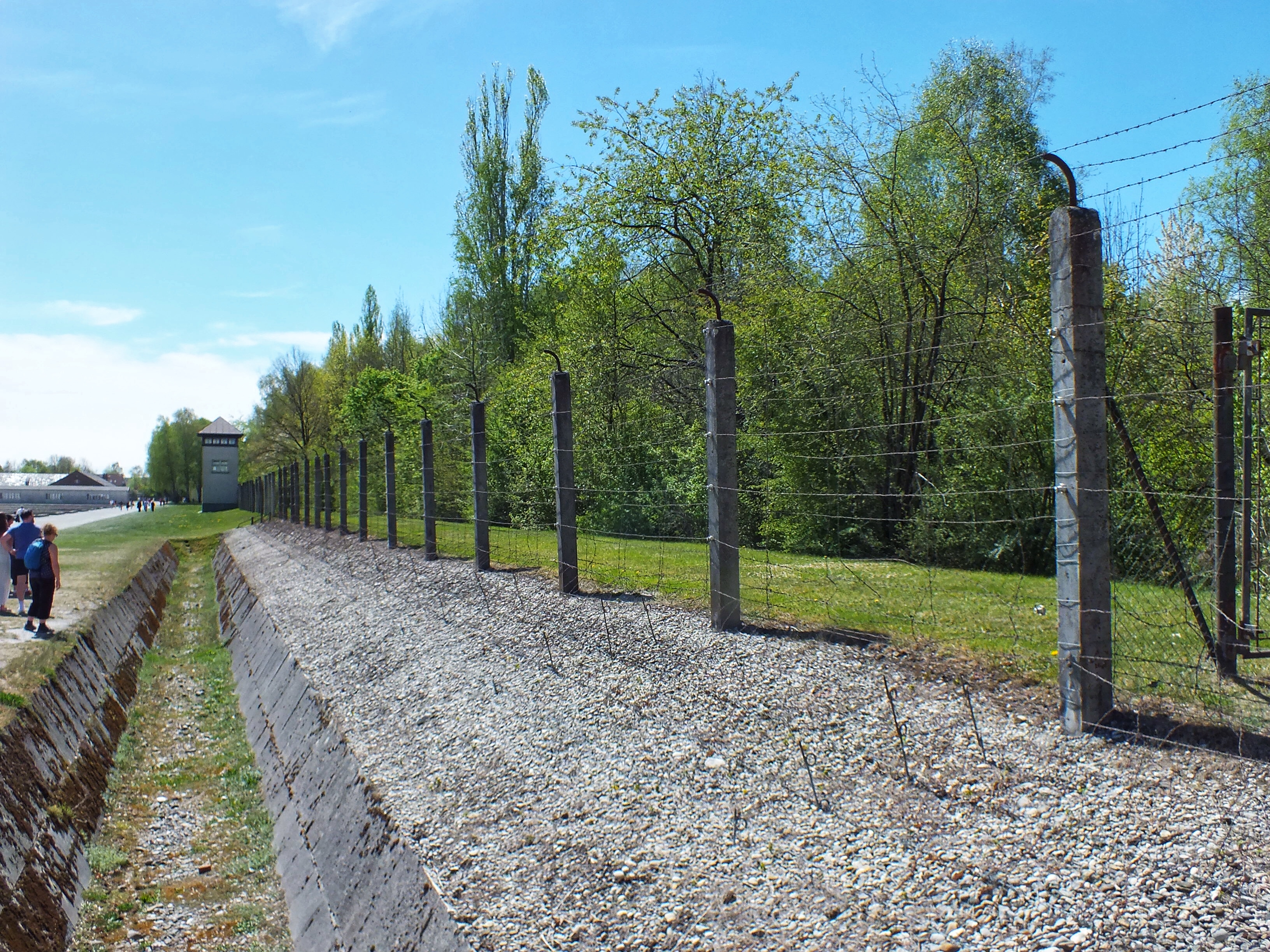 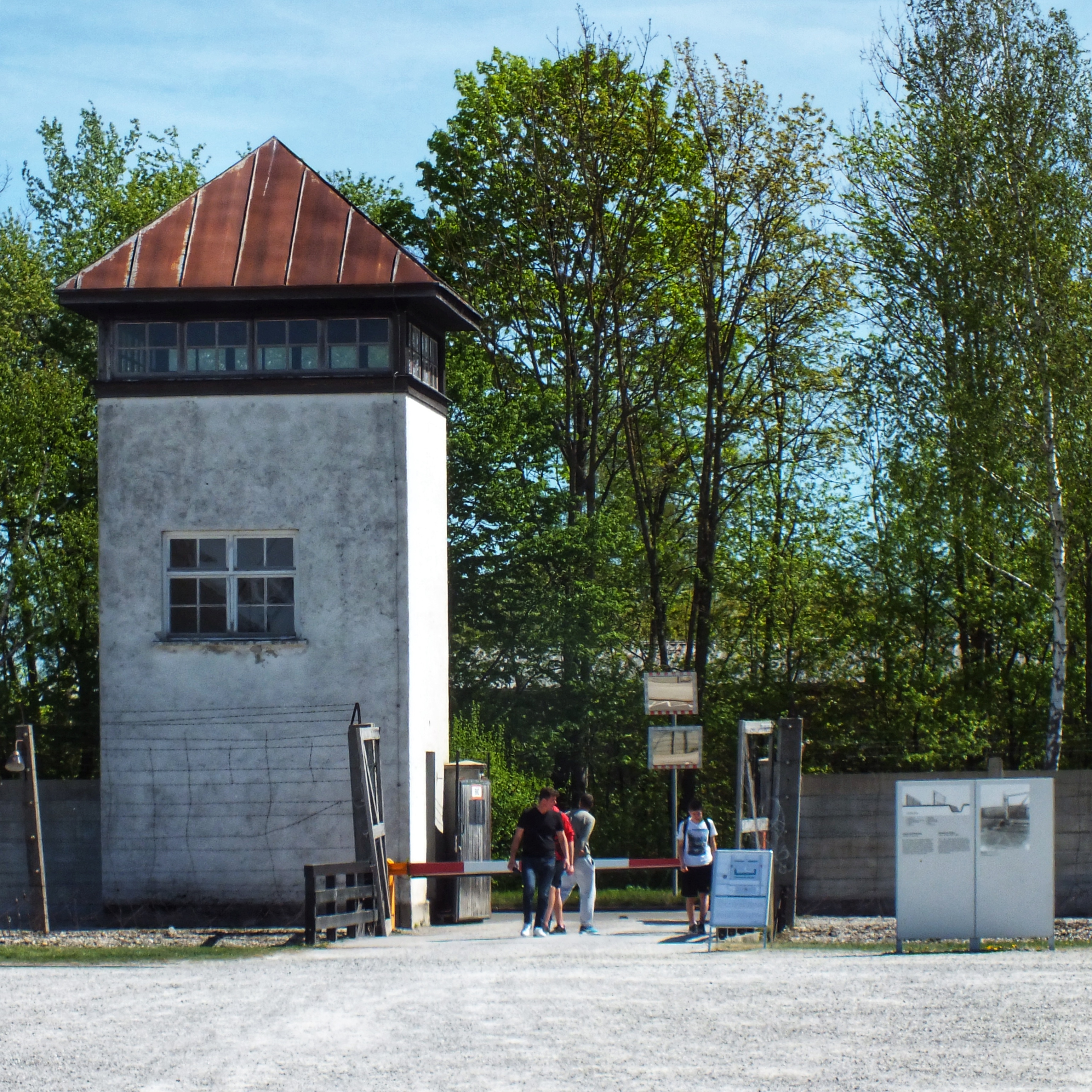 The Crematorium, where bodies were disposed of. 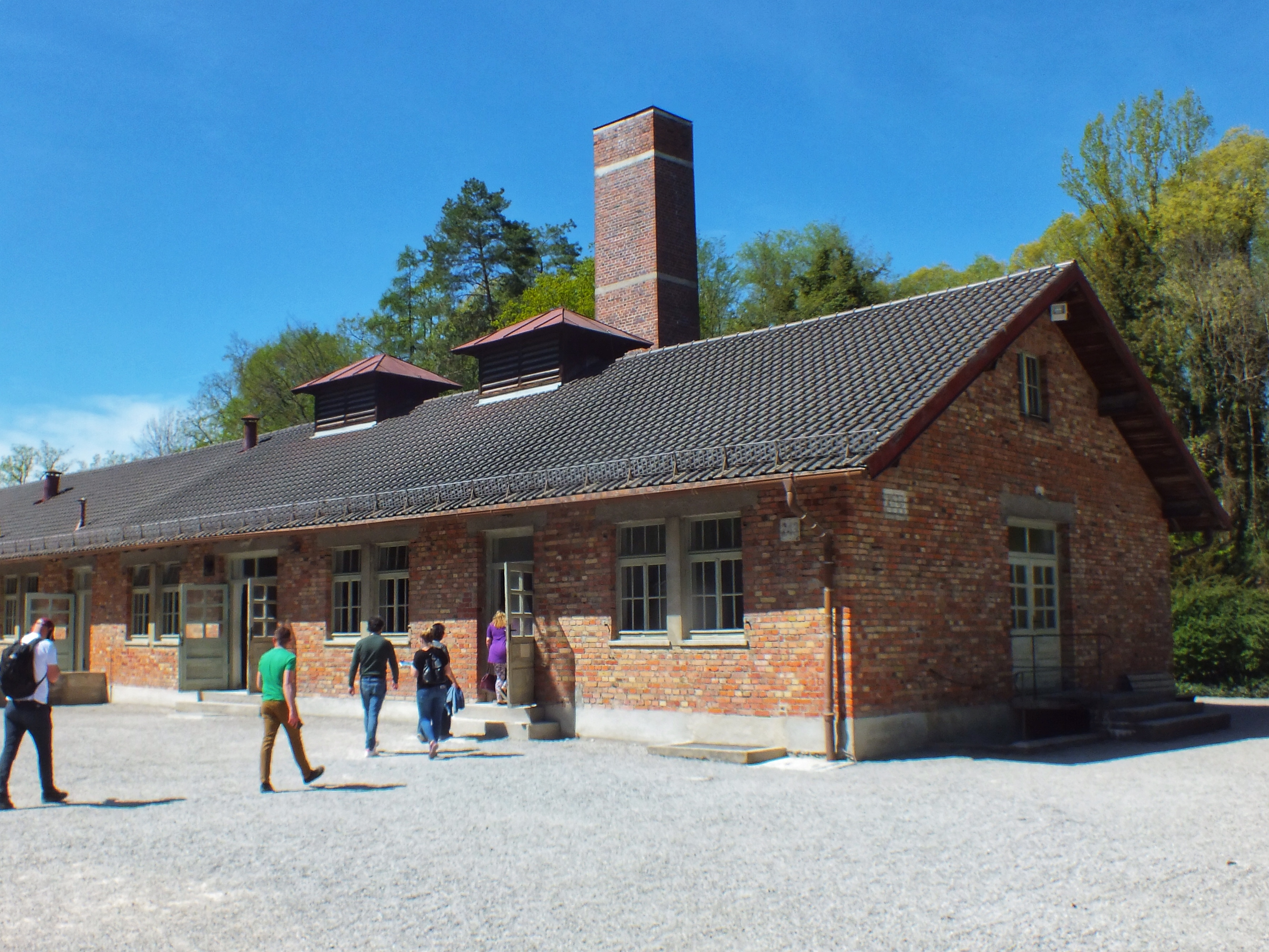 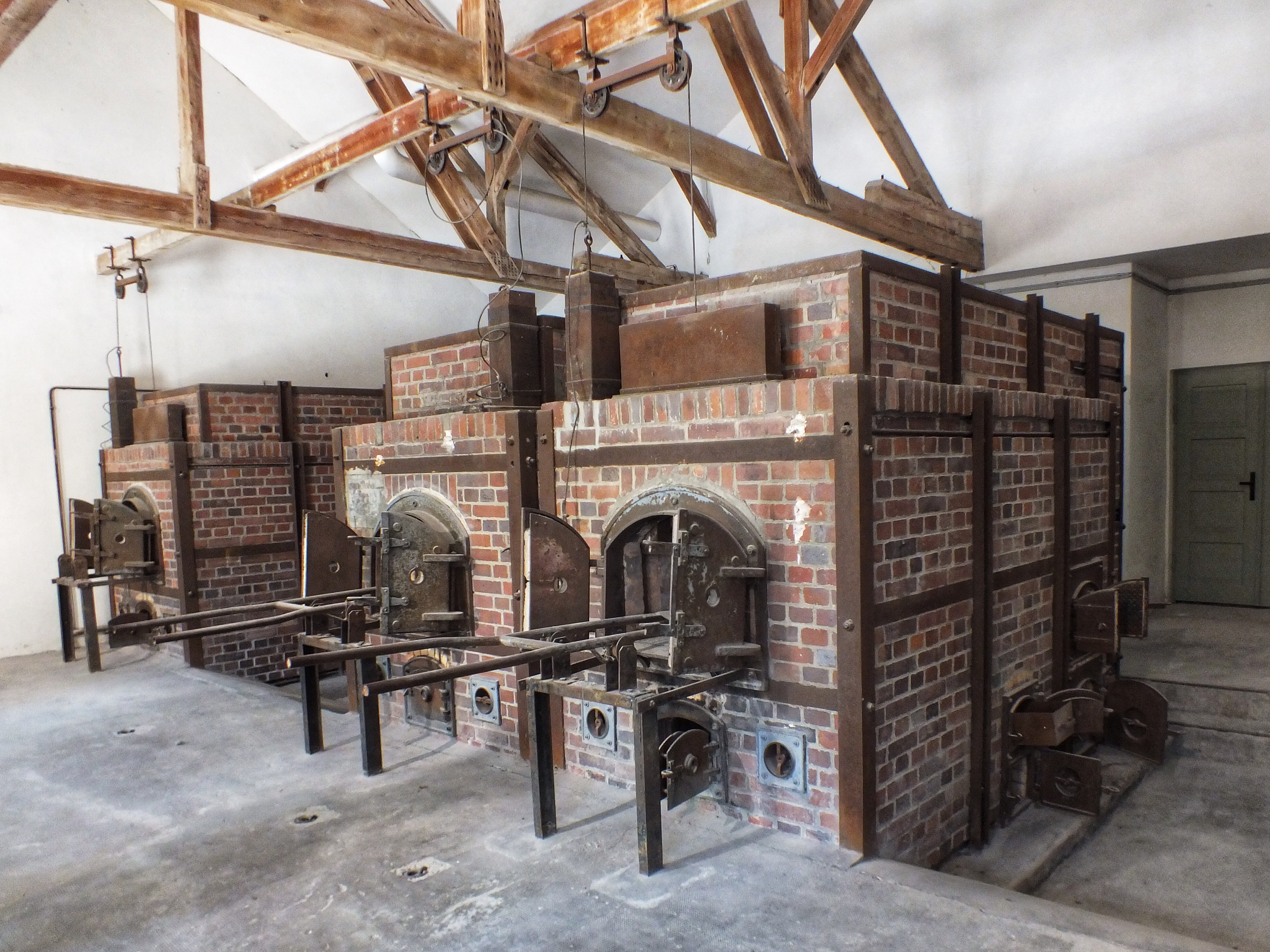 On the left is the back of the maintenance building. The building on the right was the camp prison were more important prisoners were held and also where the SS conducted their experiments on prisoners. 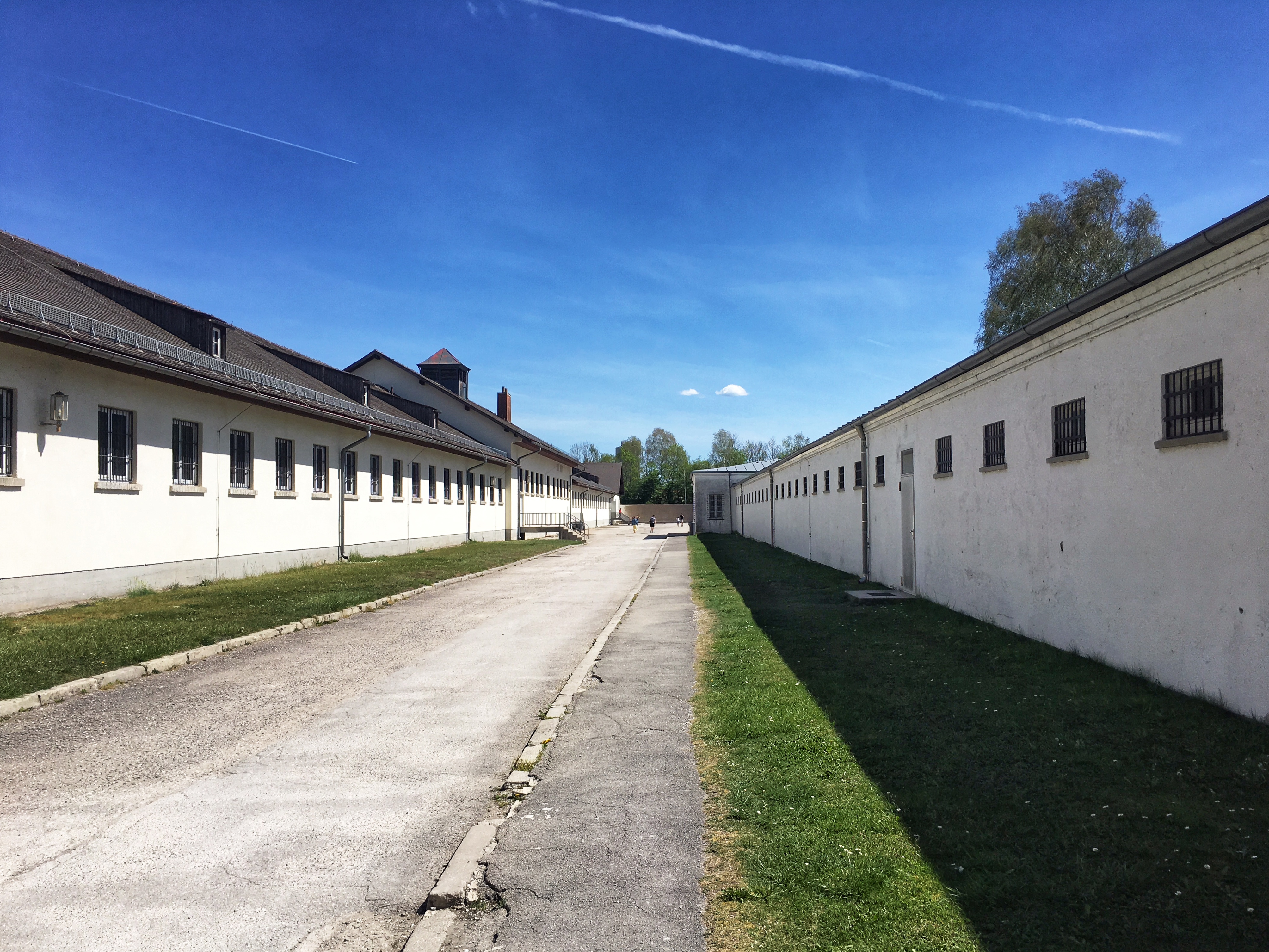 We were there for maybe three hours and left physically and emotionally exhausted.

On the previous evening, I had a sore throat just before I went to bed. On this day, I was feeling a little off, although I couldn’t point to anything specific. This evening, the sore throat came back with a vengeance and kept me awake most of the night.

This entry was posted in Historic Buildings, Museums. Bookmark the permalink.