Eagle Peak is one of the more notable mountains along the Rampart Range west of Colorado Springs. It rises like a pyramid behind the Air Force Academy, with a bare rock face that stands out among the other tree-covered mountains. A friend encouraged me to climb it with her on a warm Saturday morning.

We drove in through the north gate of the Academy with no issue—we just had to show our drivers’ licences. We parked in the lot for the visitor center. Here’s what the peak looked like from there. 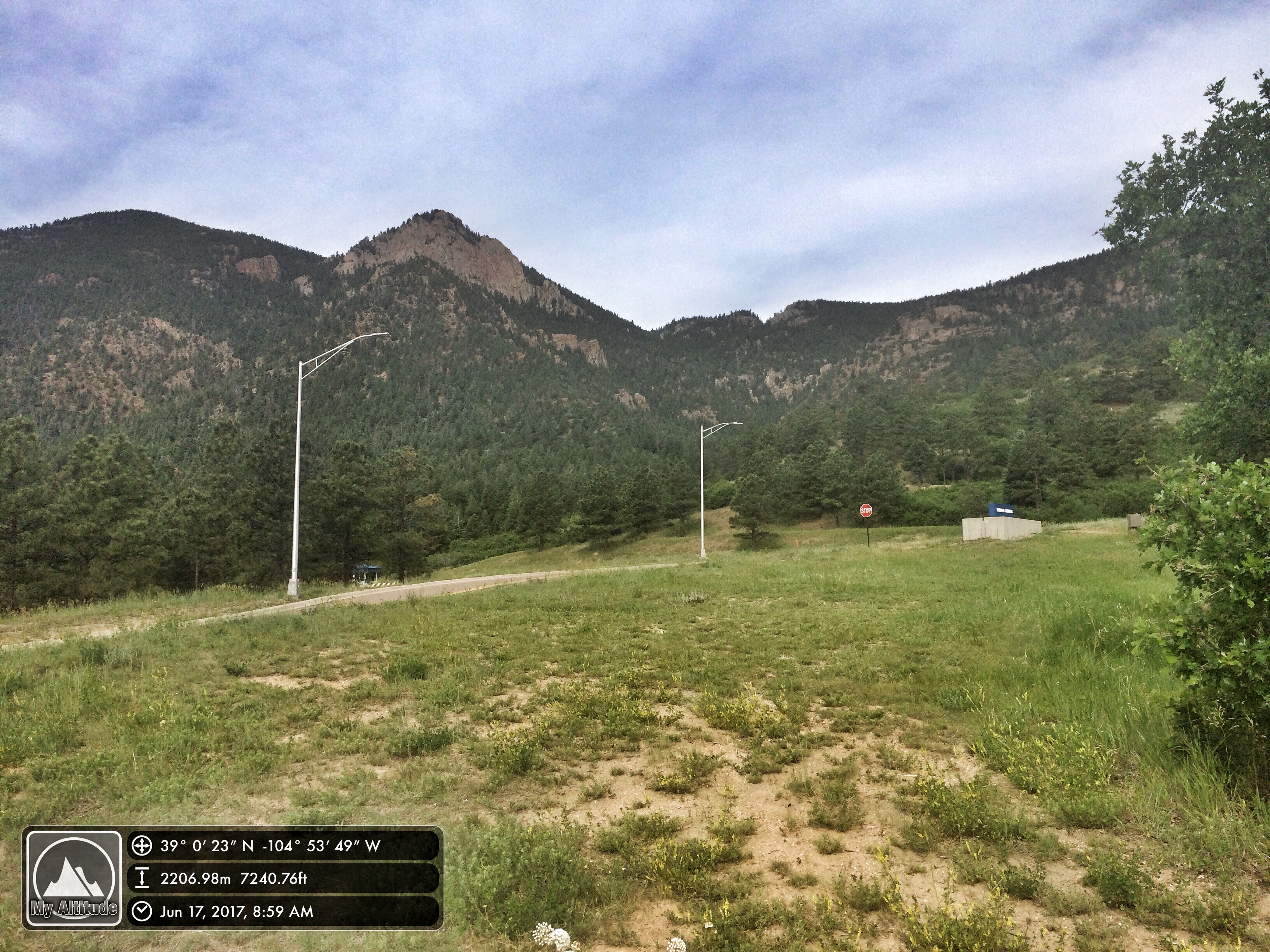 We hiked up a dirt road for about a quarter mile to the trail head, then cut off into the woods. We followed Goat Camp Creek, a small stream that could be heard more often than seen. 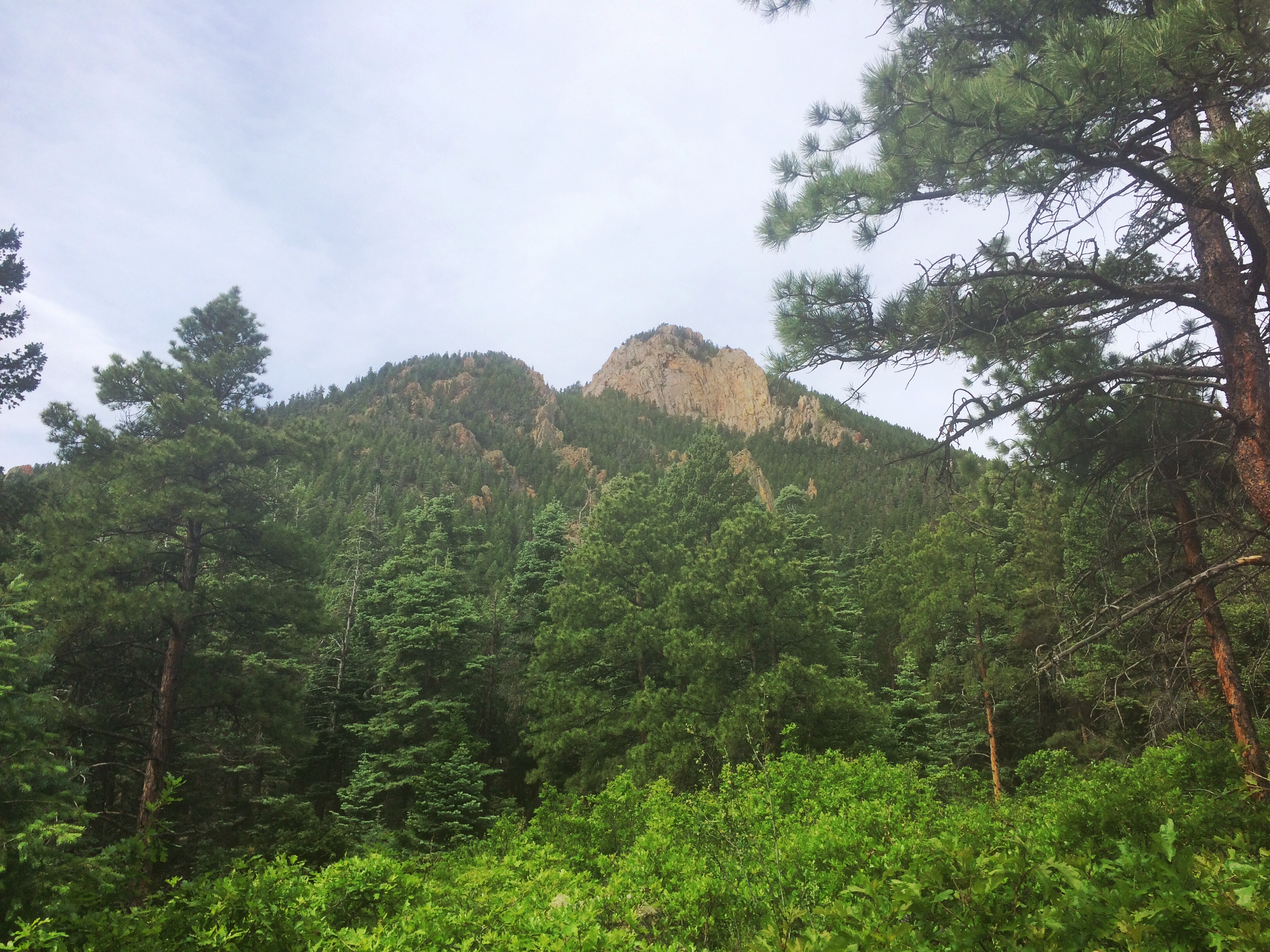 This was the most impressive view of the stream. 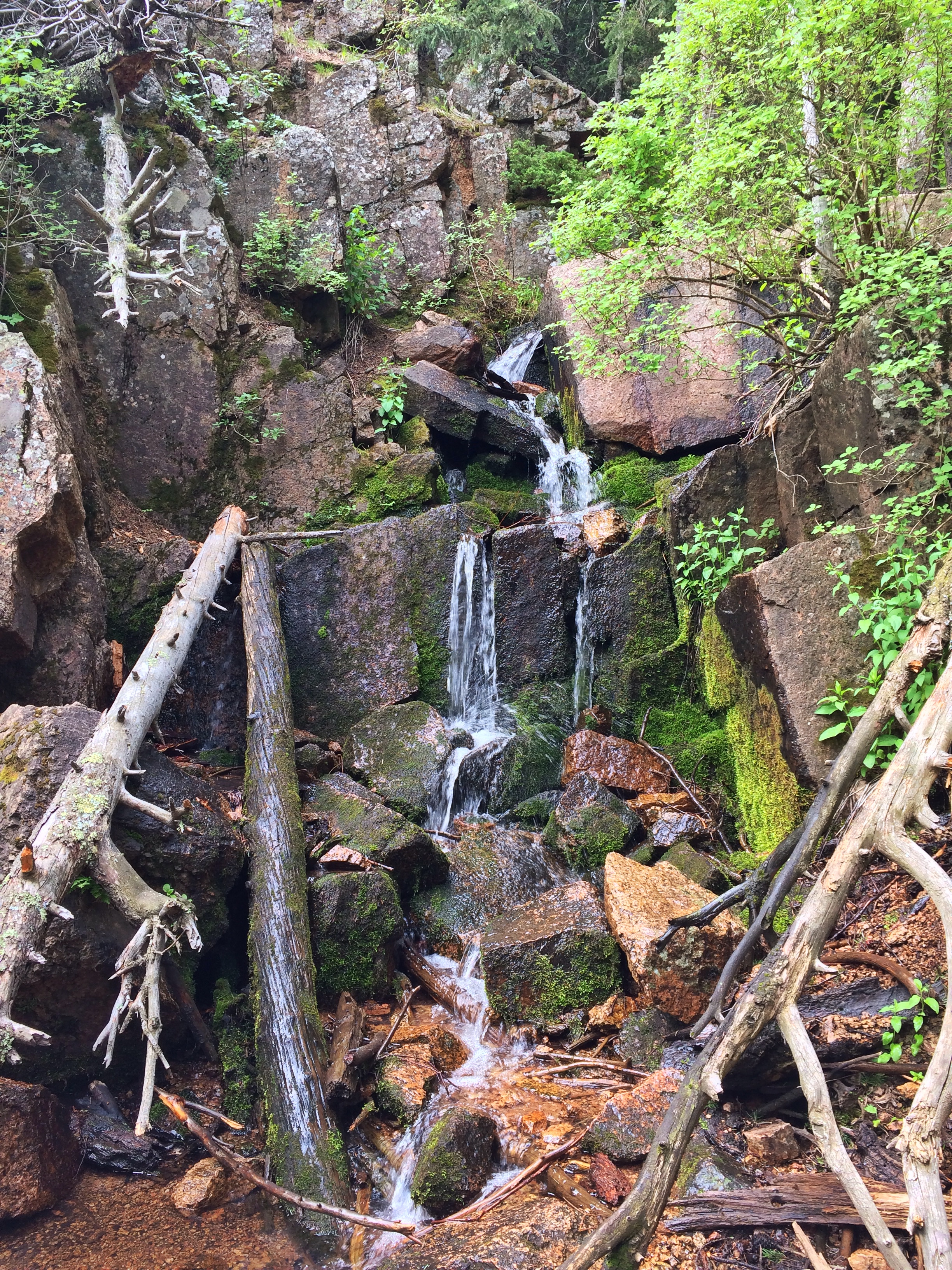 The trail was steep and uneven. I had to clamber over rocks and tree roots in many places. I had the same issues as when I climbed Mount Herman—I felt fine but frequently got dizzy. About half the way up, the trail flattened out for several hundred yards through an aspen grove. 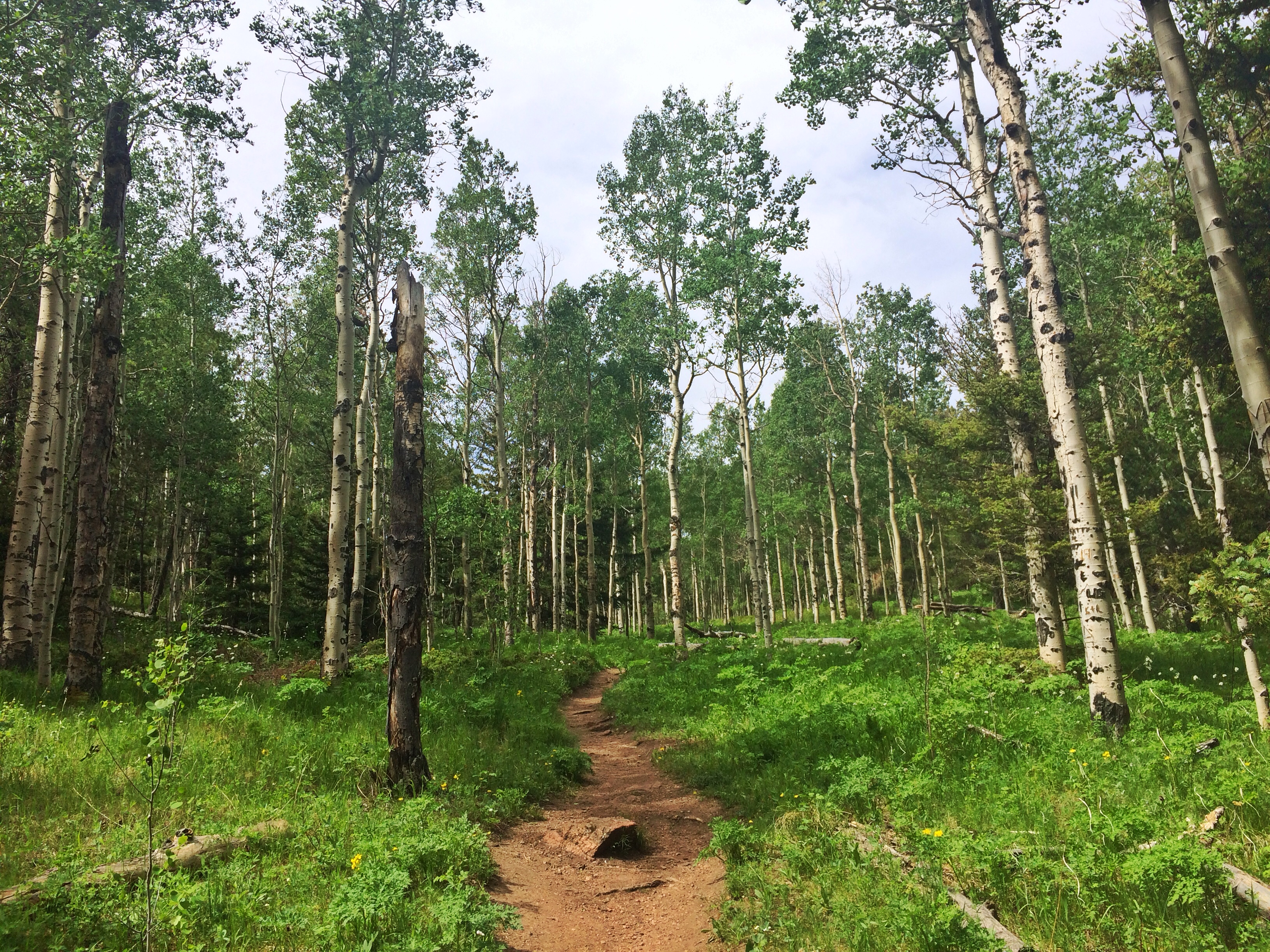 The path then climbed steeply through a long patch of scree. The surface was loose gravel on which it was hard to get a solid footing. There were rocks scattered throughout, some of which were firmly planted and some of which moved. I caught a bit of a second wind on this stretch and made my best speed of the day. Something unbelievable happened along about here—we caught up with and passed two other hikers. 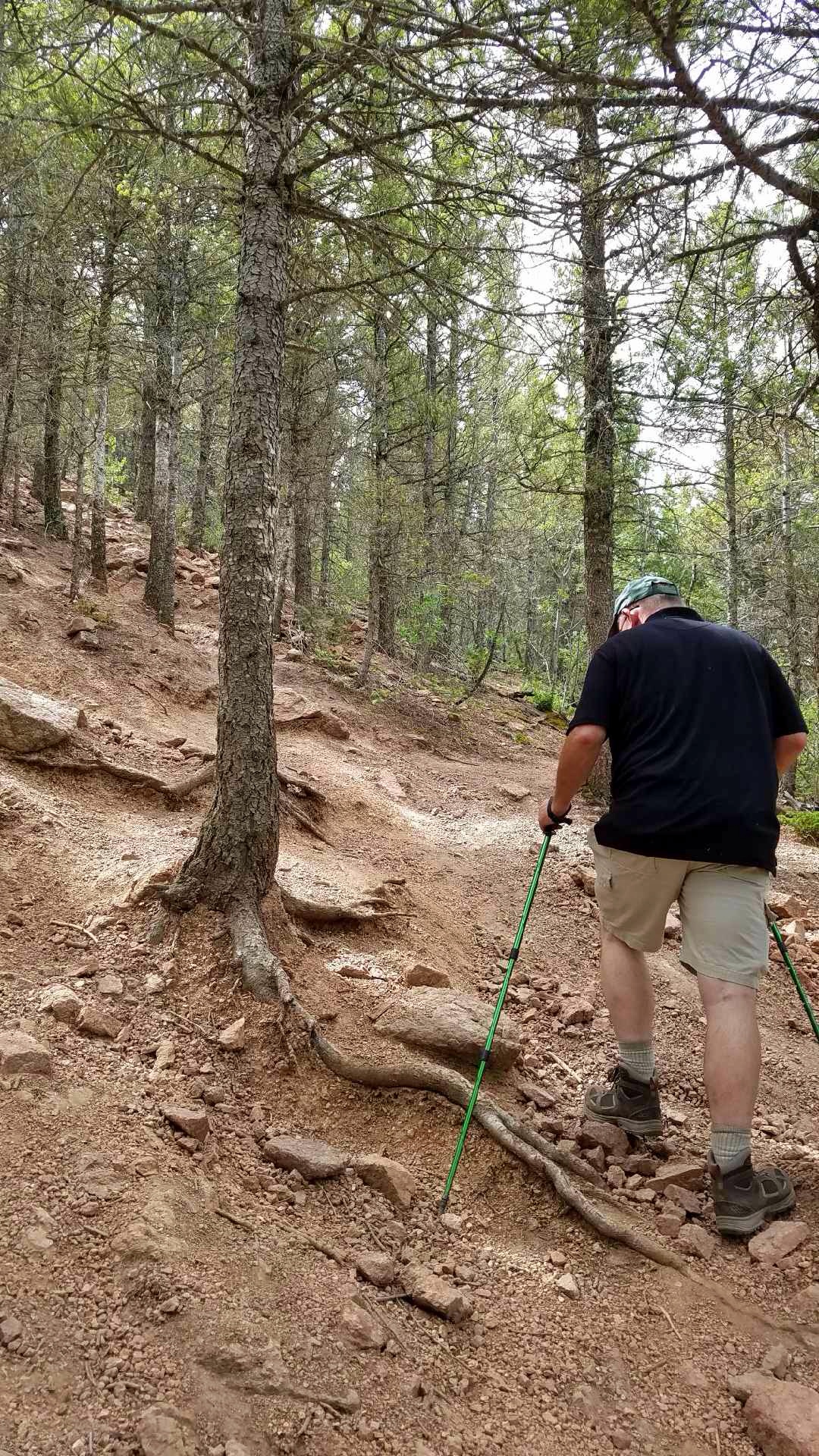 For the final hundred yards to the summit, we were bouldering. The blue dots mark the trail, such as it is. 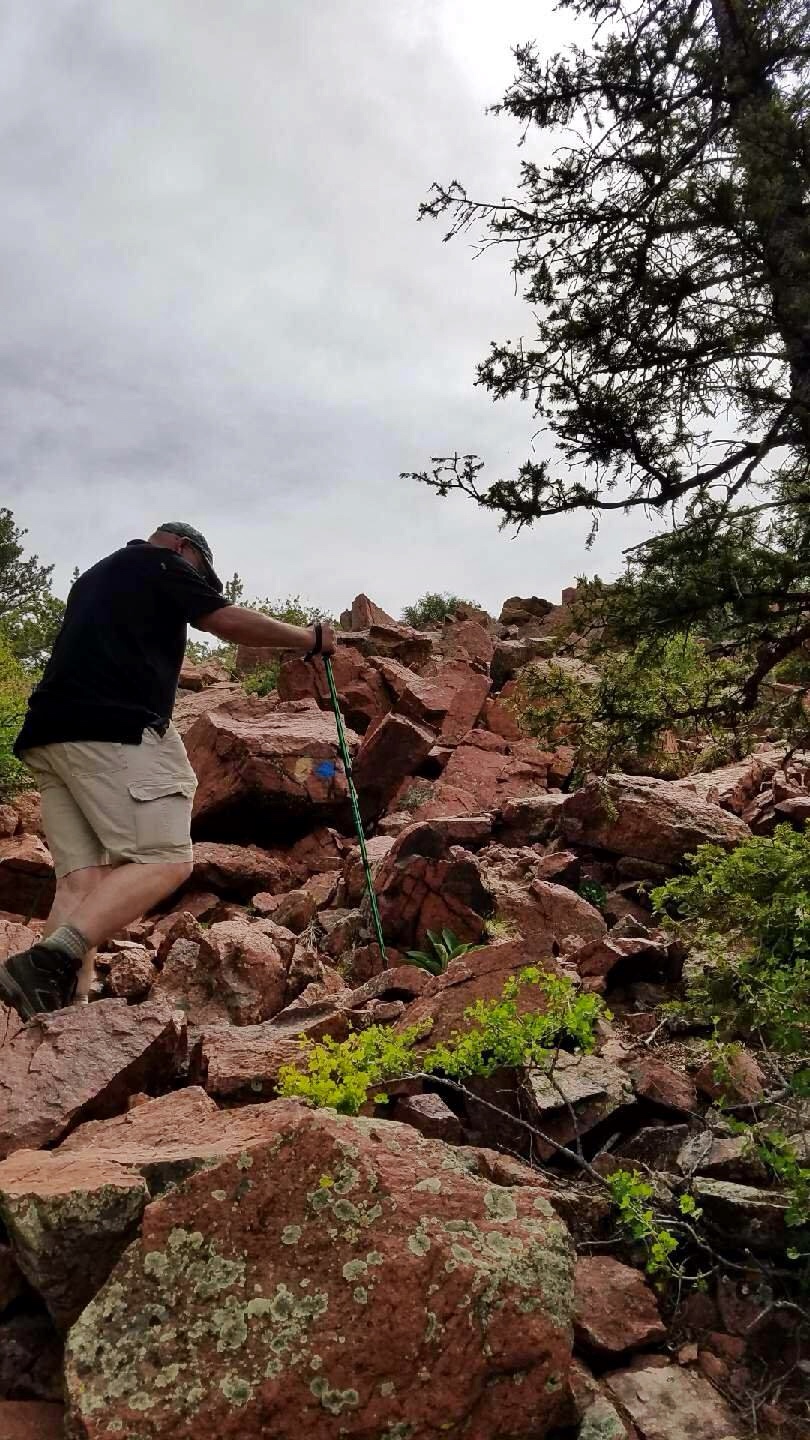 The view from the top was amazing. Pikes Peak stood out to the west. The altitude at the summit of Eagle Peak is 9,368 feet, a climb of 2,128 feet in just over a mile. 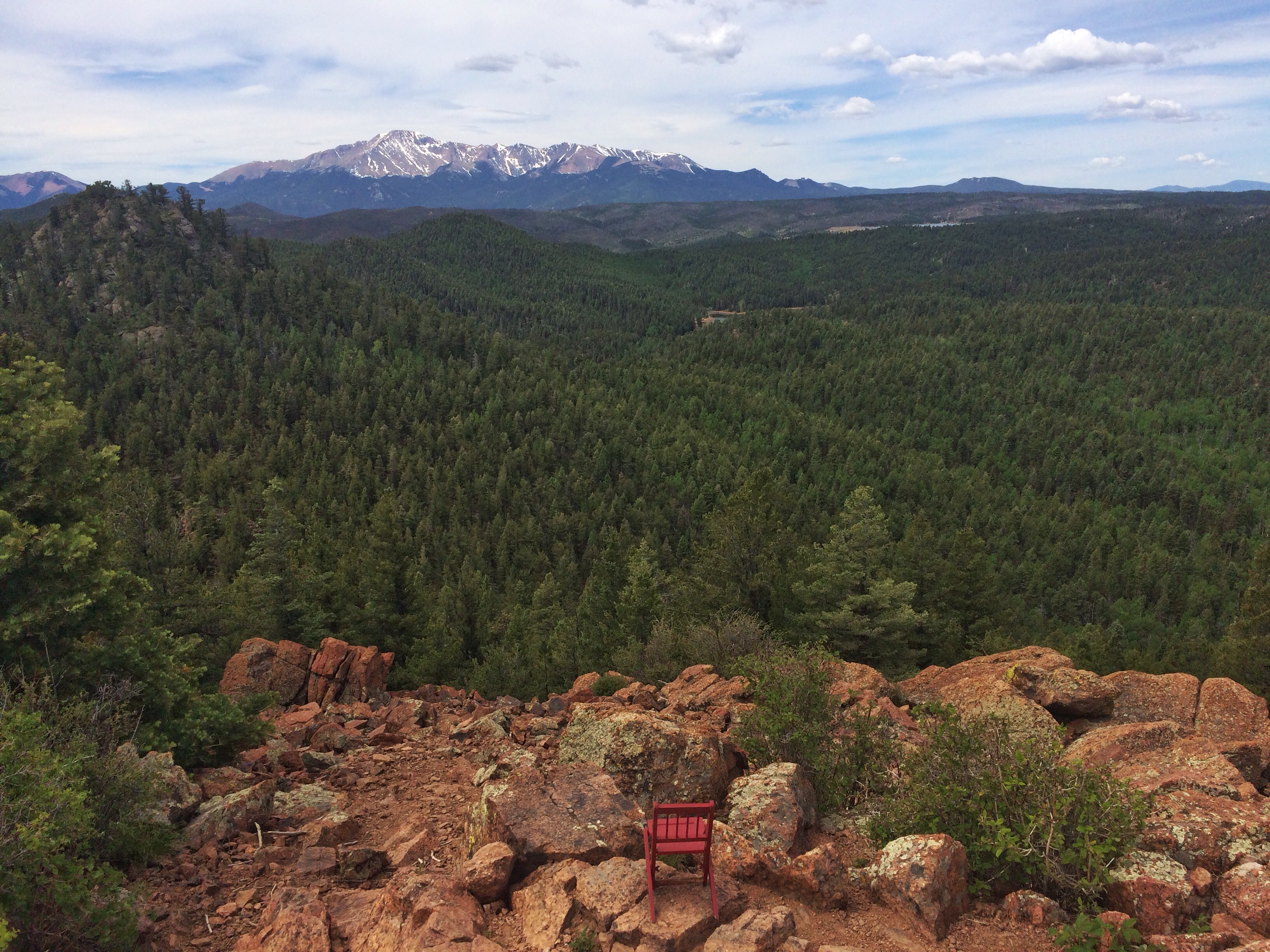 We could see a lot of other high peaks way off to the north. 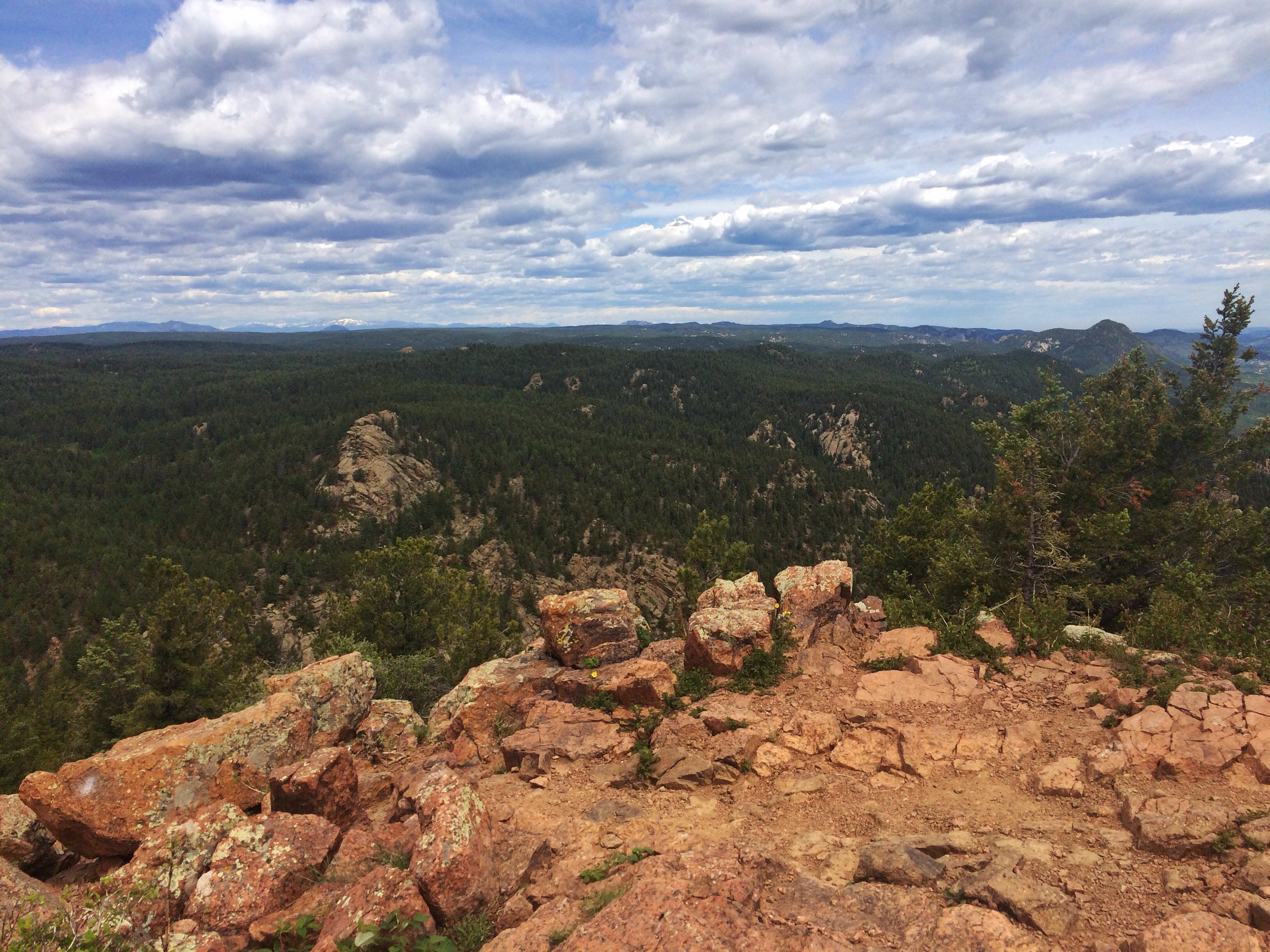 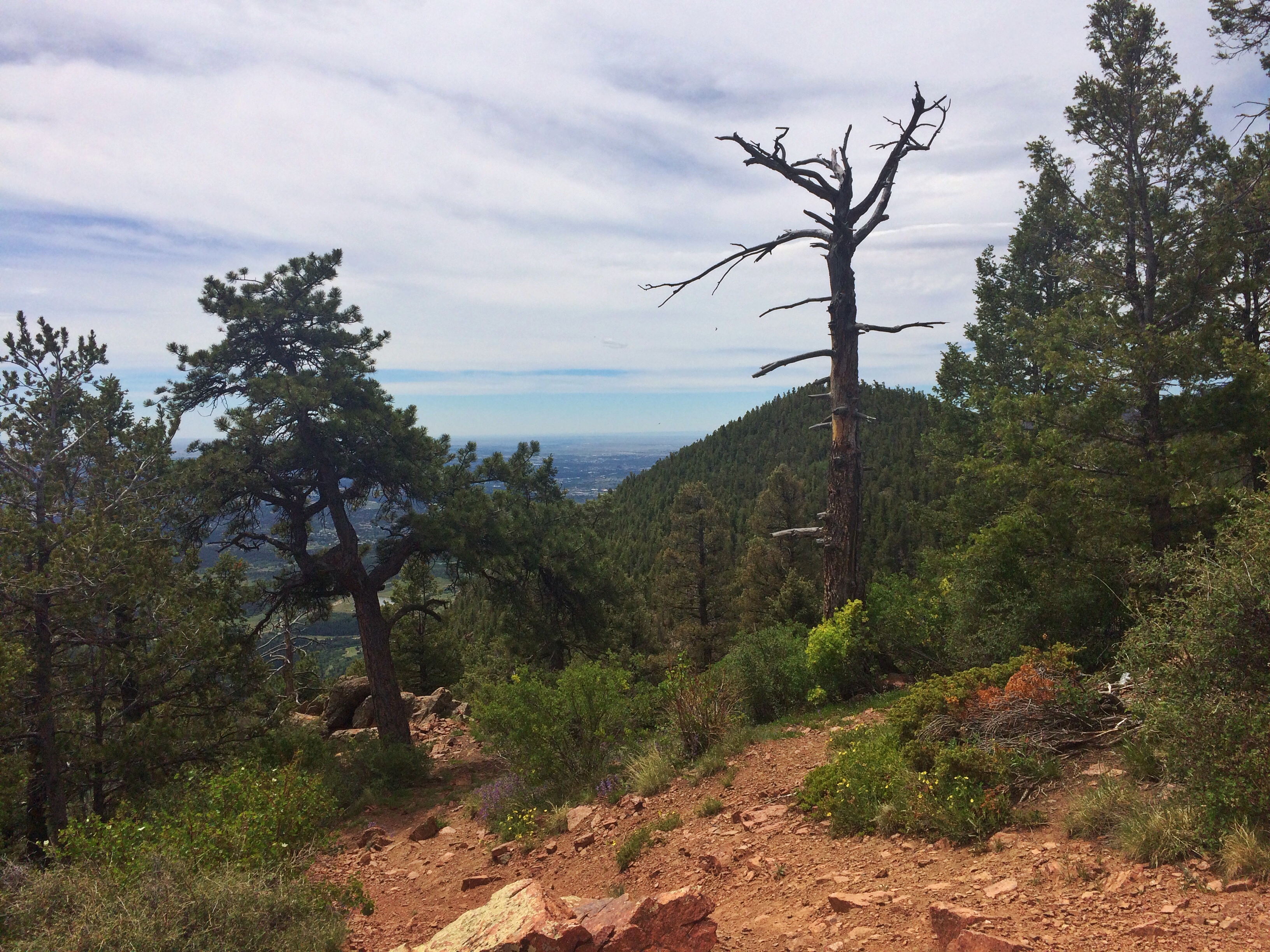 The view to the east was the most impressive, with the Air Force Academy spread out below. 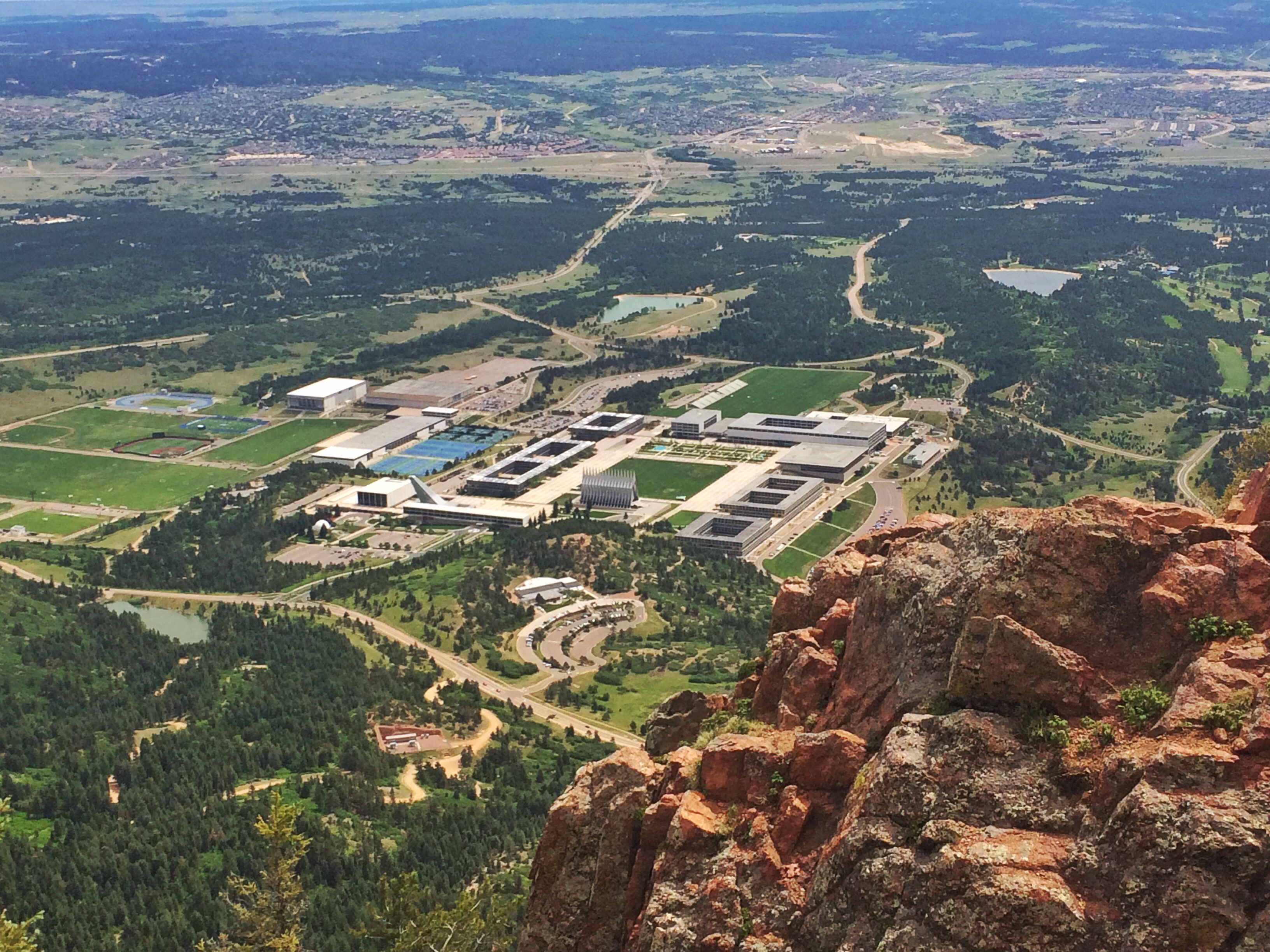 We stayed on top for maybe 15 minutes. The sun was intense, but a brisk wind kept things pleasant.

Going down wasn’t as tiring, but it was harder going. I slipped several times on the steep, loose gravel and only just kept from wiping out. 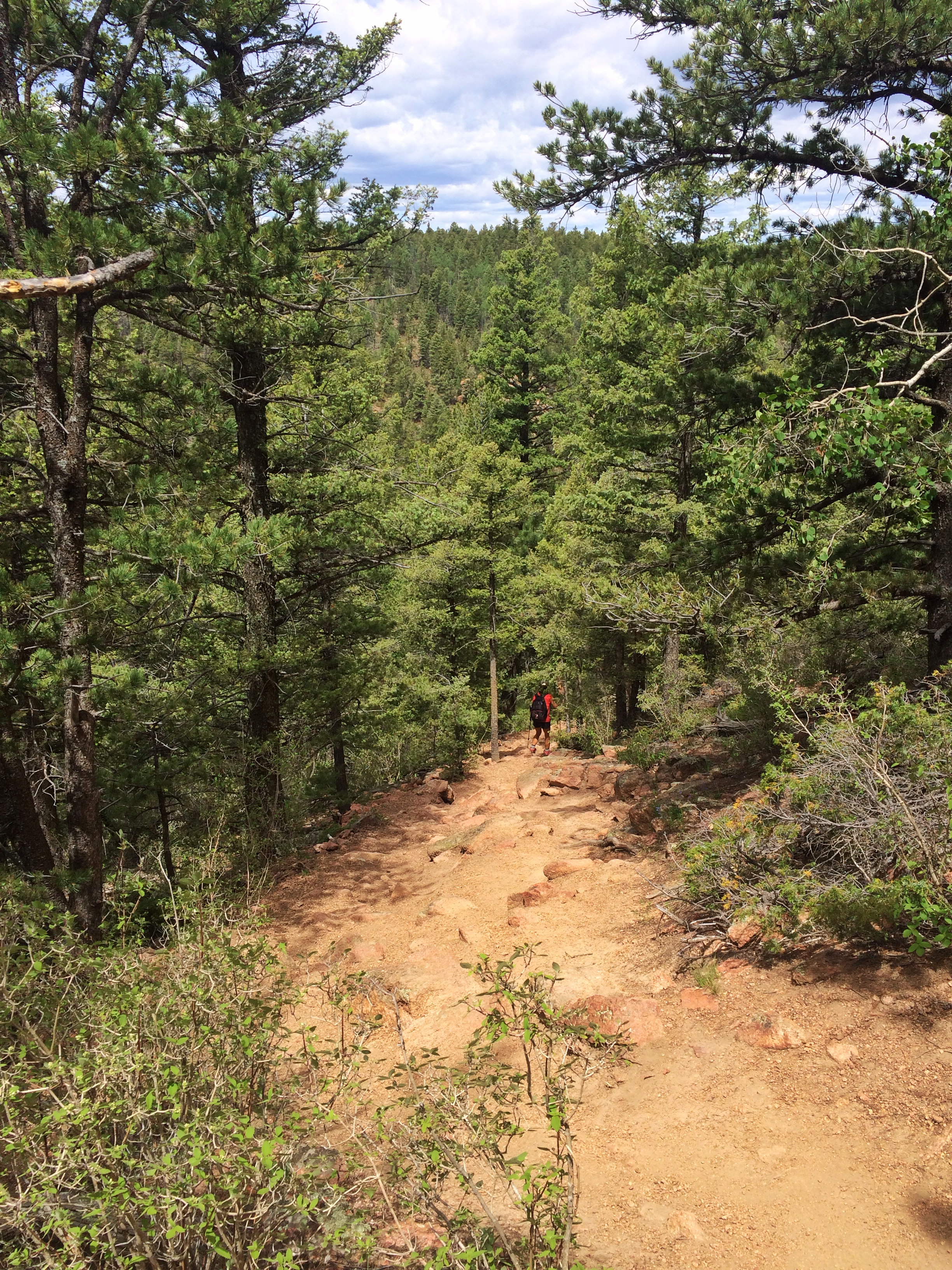 On the way down, I spotted a lifer, a MacGillivray’s Warbler (next post).

About where I saw the bird, my friend insisted on taking a photo of me. The fact that I look like an old man on crutches isn’t just a pose. 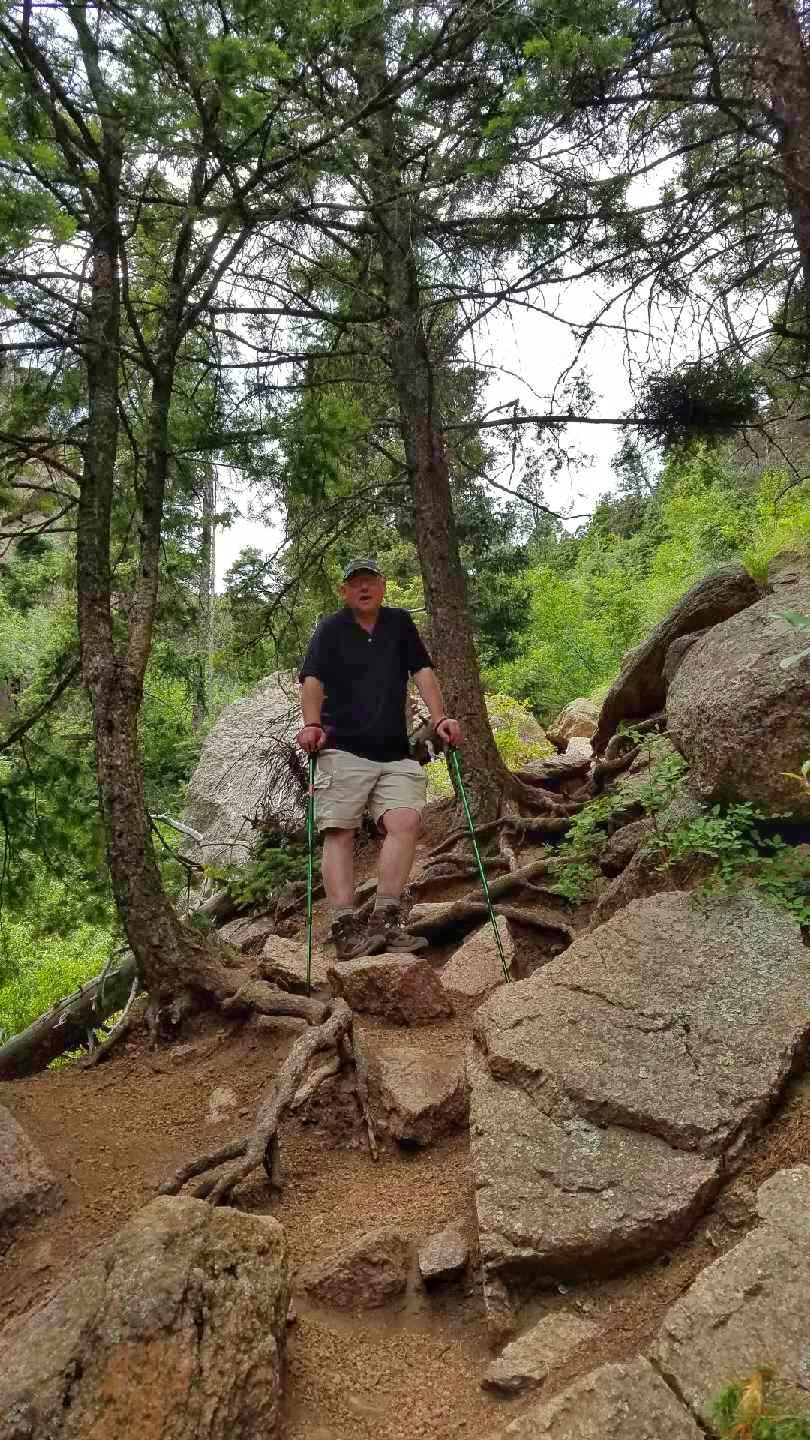 The hike wiped me out. It was close to 90° once we got out of the breeze on top. I had two bottles of water, which weren’t nearly enough. I had to take a seat on a rock for a couple minutes not long after this photo was taken because I was feeling light-headed and came close to taking a header on a rock.

When I got home, I looked up Eagle Peak Trail on the internet. Here are a few of the comments I found.

After reading all that, I didn’t feel so bad about my slow, stumbling pace.