I arrived  at Fort Laramie around 1:30 on a warm, sunny afternoon. I stopped to see the old Army Bridge over the Platte River, built in 1875. At that time, the river was much wider and so the bridge is now much longer than the river is wide. The bridge was impressive, but the chief attraction was the huge flock of Cliff Swallows that nested under the modern bridge 30 yards or so downstream. 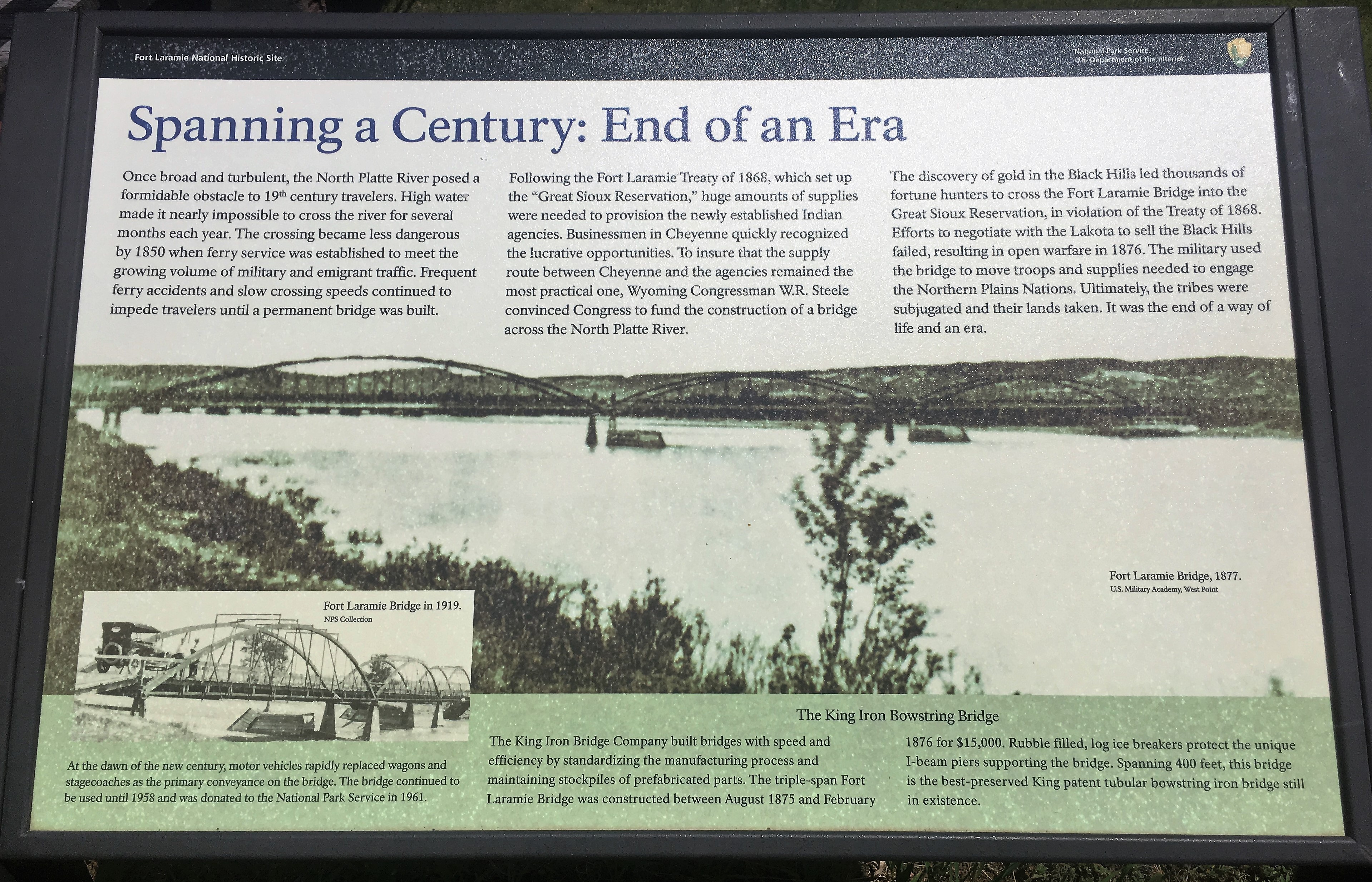 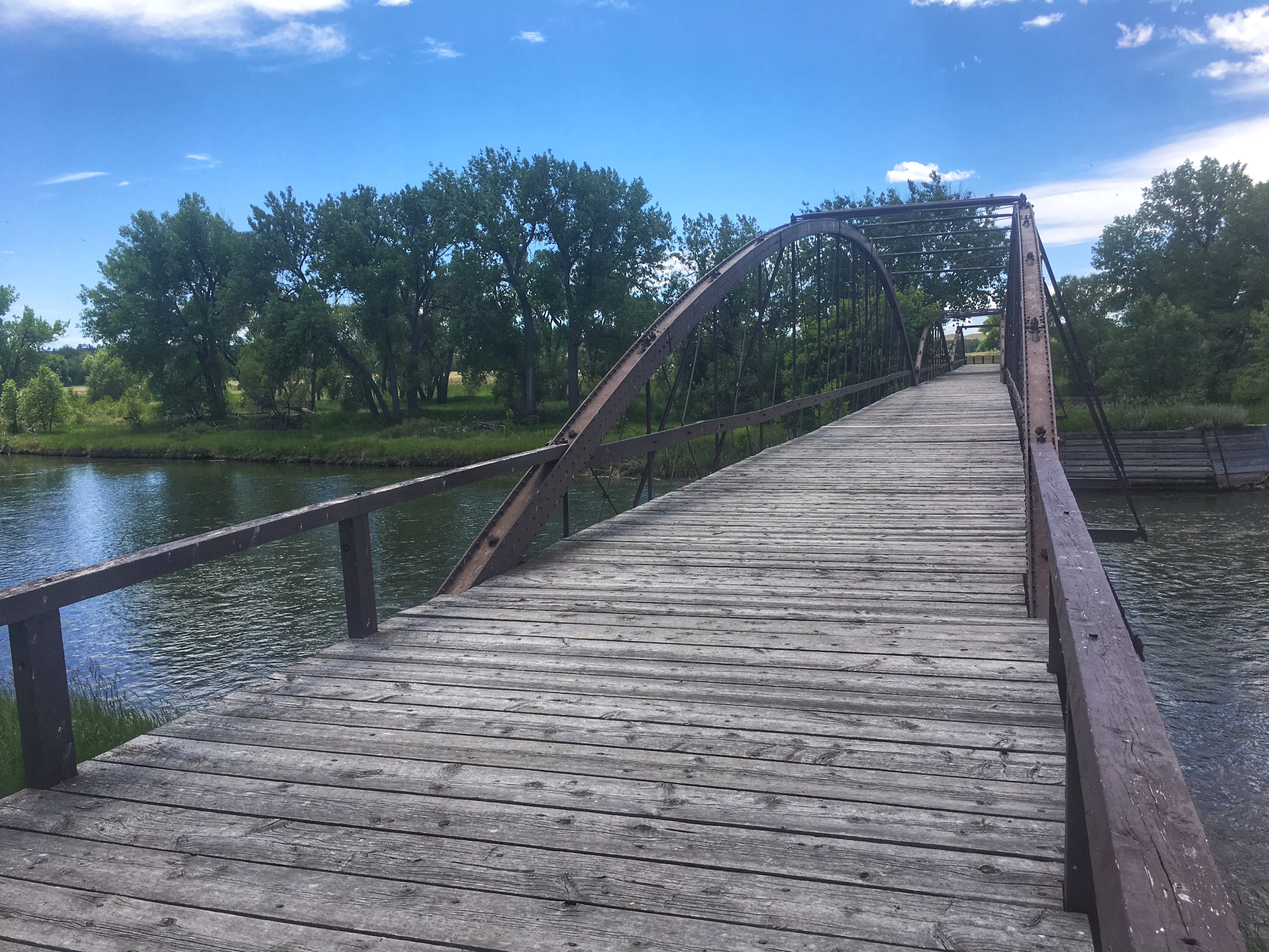 The fort itself was a mile or so further on. There were other visitors, but it certainly wasn’t crowded. I over-thought and parked in a picnic area which meant that I had a longish walk across hot parking-lot pavement to get to the fort. I was hoping the large cottonwoods would cast shade over my car before I returned. It didn’t happen, so I had a second long walk and a hot car at the end of my visit.

The first fort here—Fort William—was built as a trading post in 1834. It was replaced by a larger adobe fort—Fort John—in 1841. in 1849, when the Army decided it wanted a fort on this spot, it bought Fort John, renamed it Fort Laramie, and expanded it. It remained an active fort until 1890 when the Army moved out and sold the buildings at auction. Many of the original buildings are gone. Eleven remain and have been restored next to the ruins or foundations of several others. It was a large fort, so seeing it all involved a lot of walking. I spent two and a half hours, visited every building, read every sign, watched the video in the visitor center, bought some stuff in the gift shop, and, in short, did everything there was to do.

The Commissary Storehouse, built in 1884 and now housing the visitor center. The building in the right distance is the New Guardhouse. The flagpole is in the center of the parade ground. 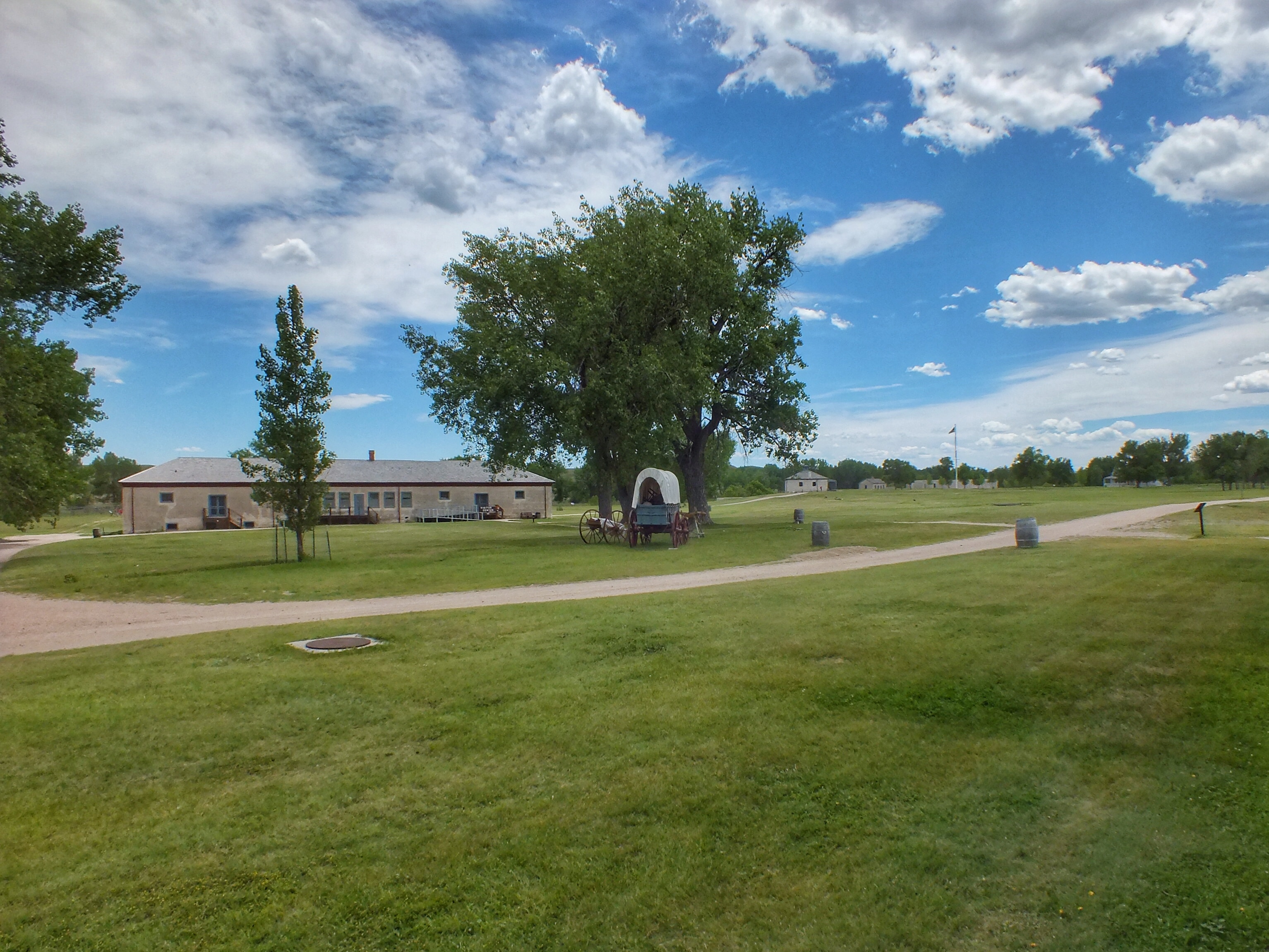 The Cavalry Barracks, built in 1874. The soldiers slept upstairs. Mess rooms and kitchens were downstairs. 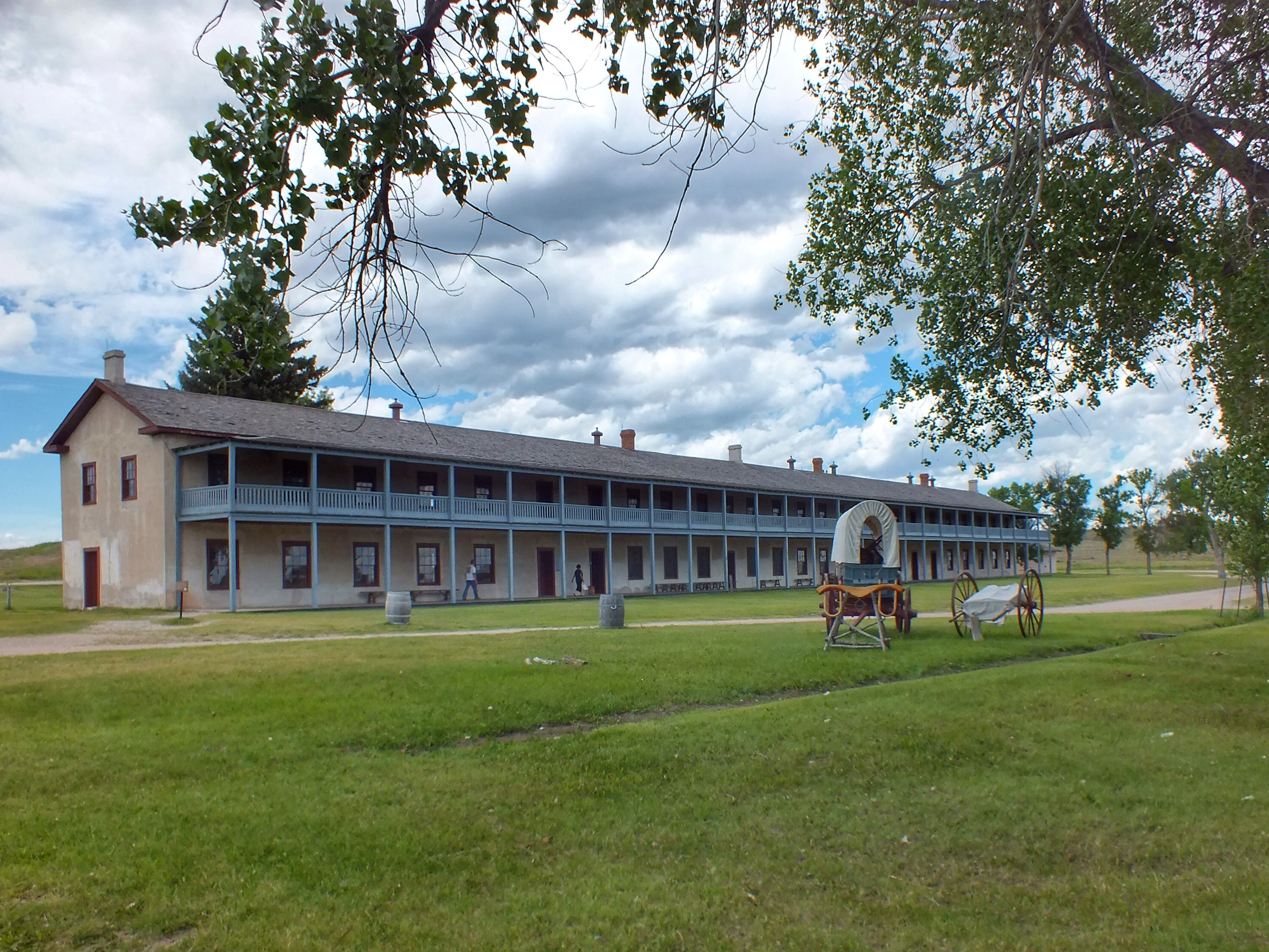 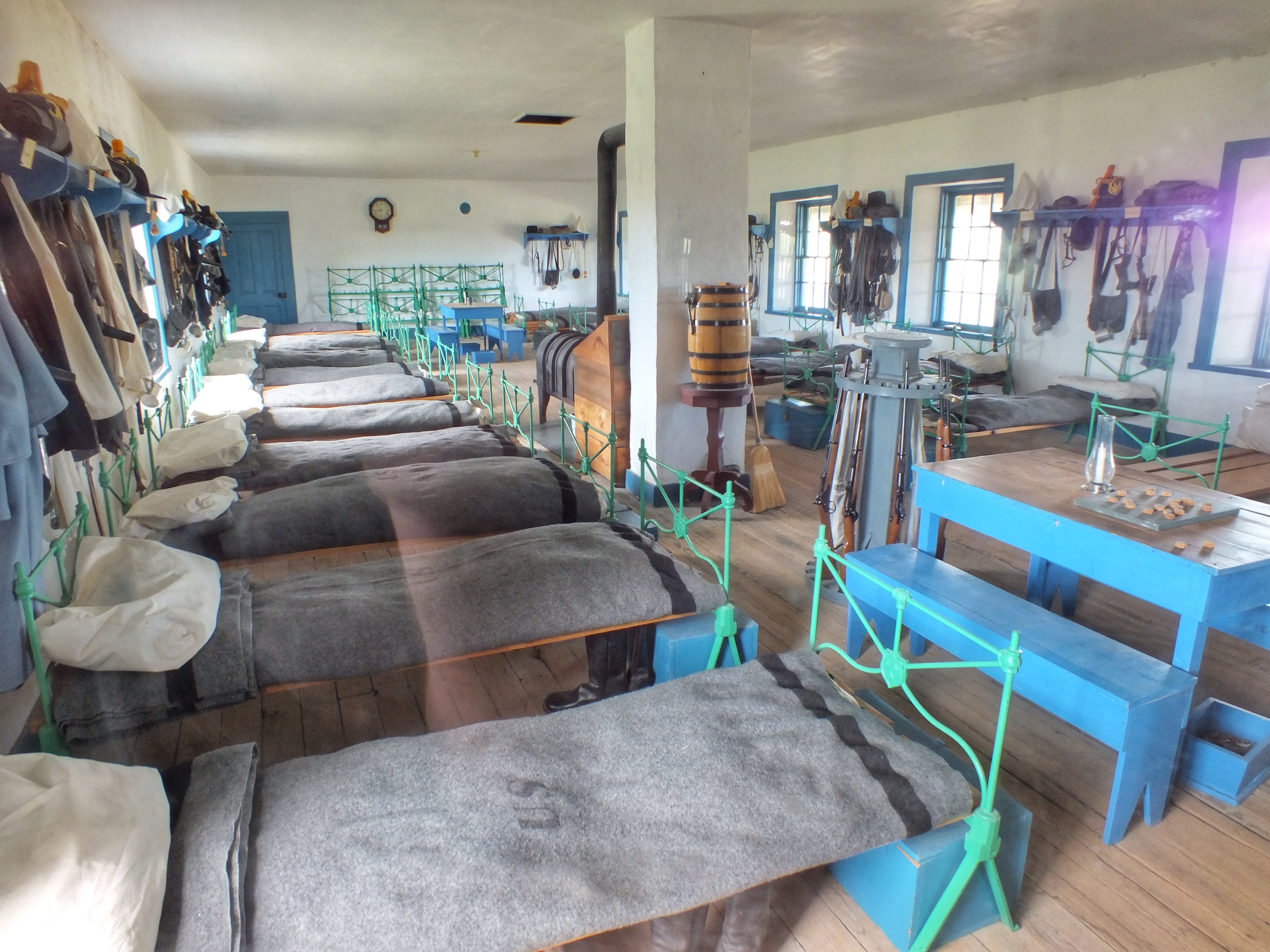 General Sink (latrine) ruins. It was built in 1886. The sewage drained into the Laramie River in the background. 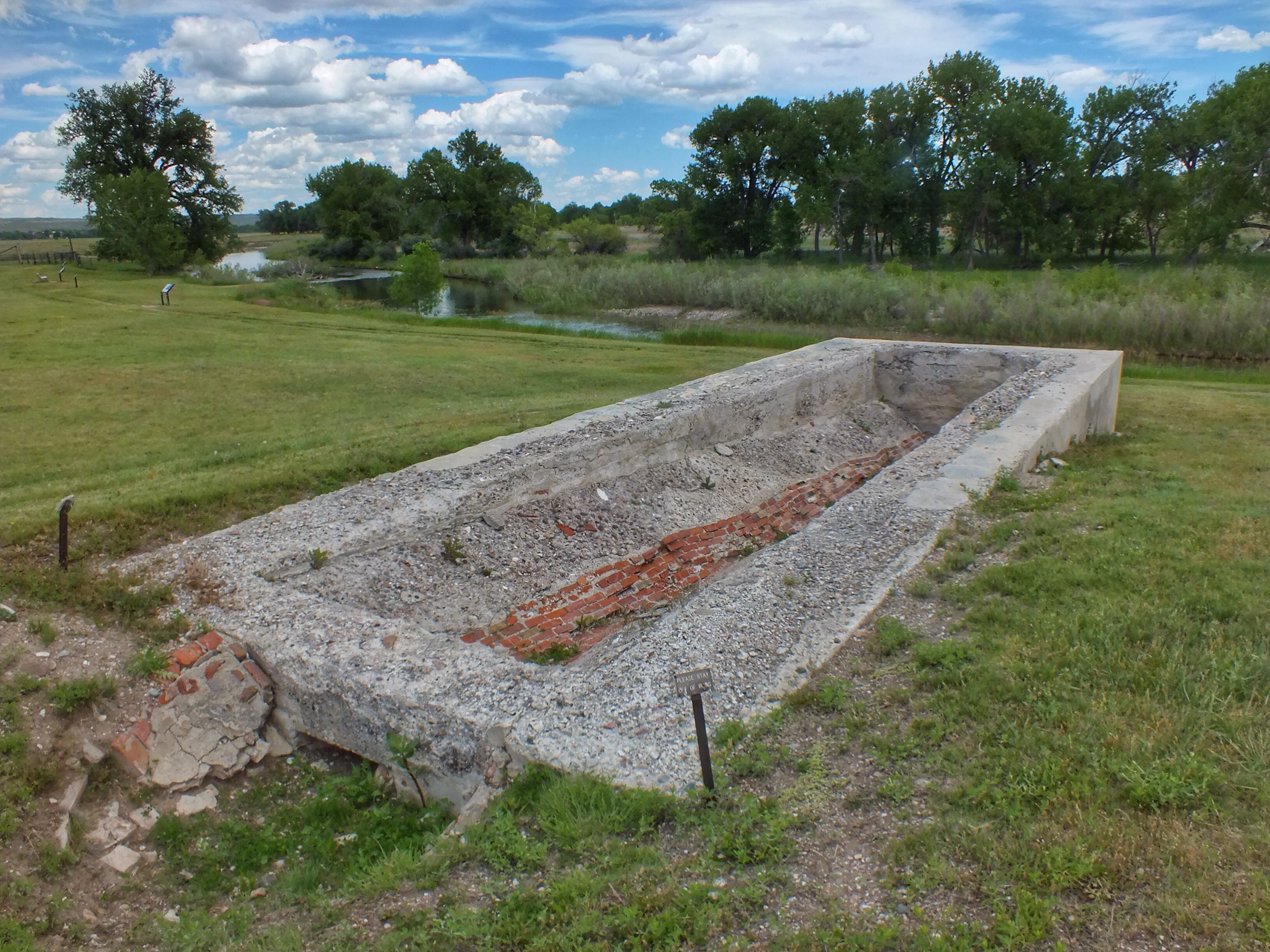 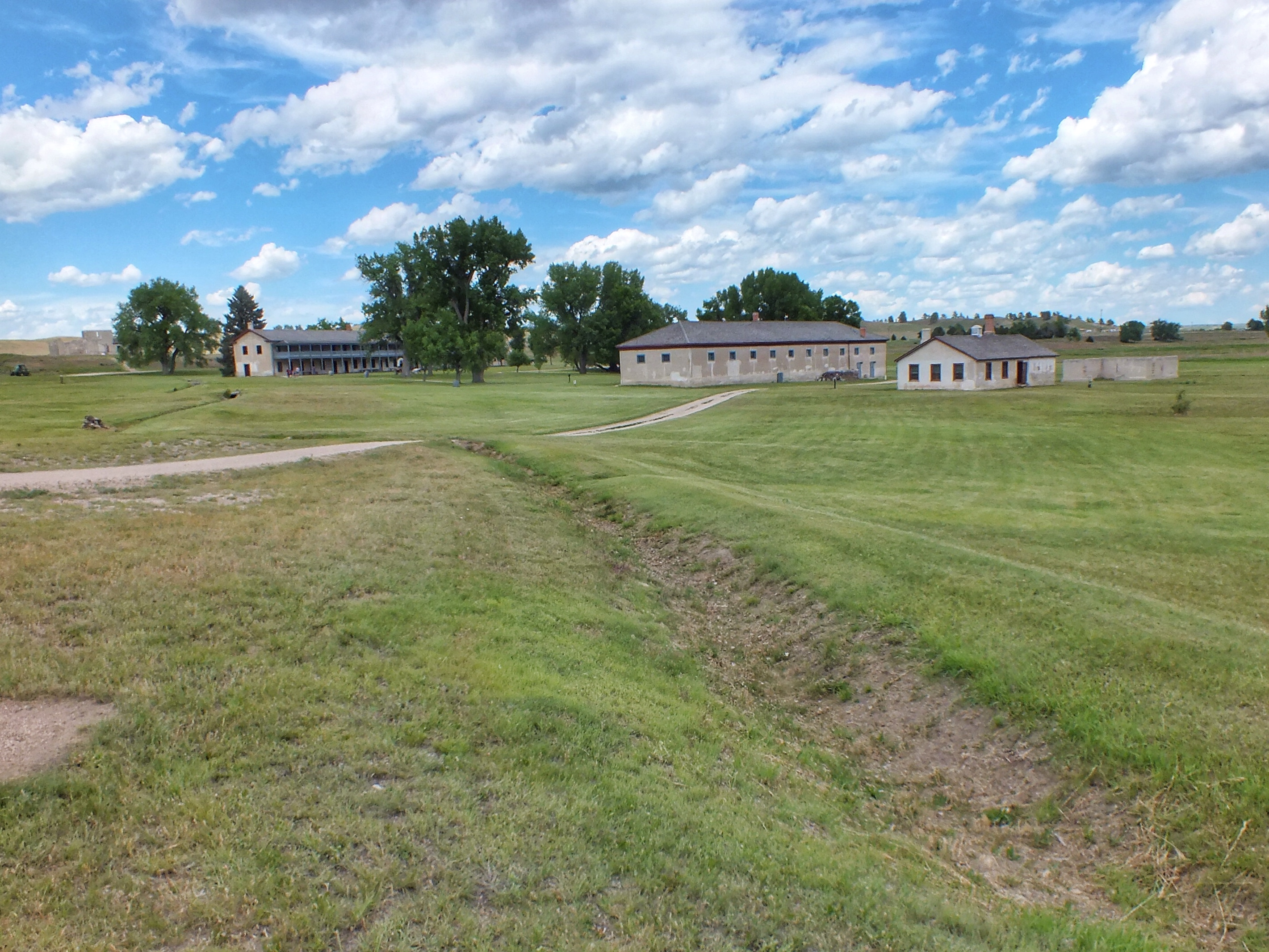 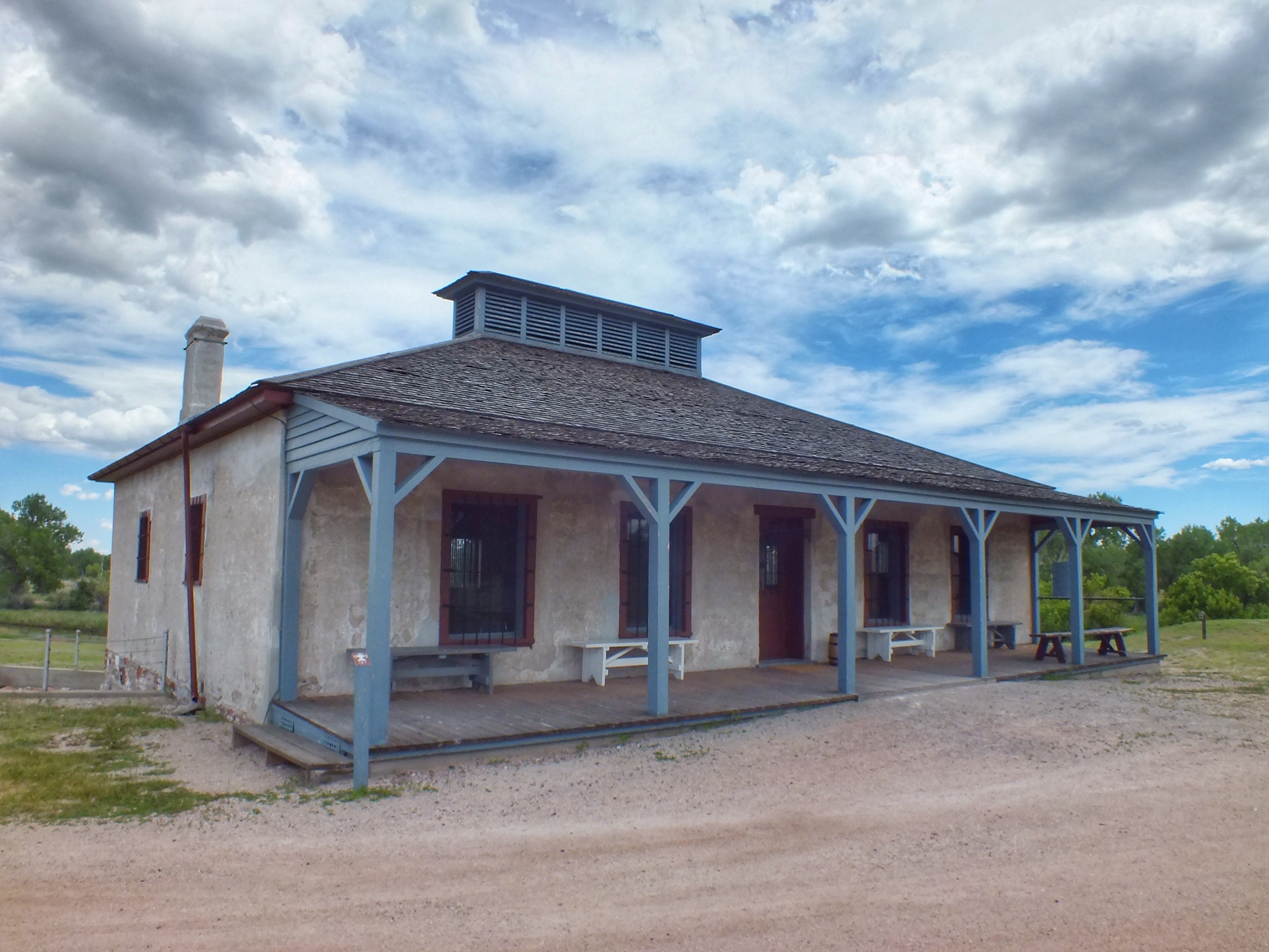 In the photo above, you can see a chained off area to the left of the guardhouse. That’s the foundation of an older guardhouse (below). That small area contained five cells which were five feet high, five feet long, and (I’d estimate) about two feet wide. 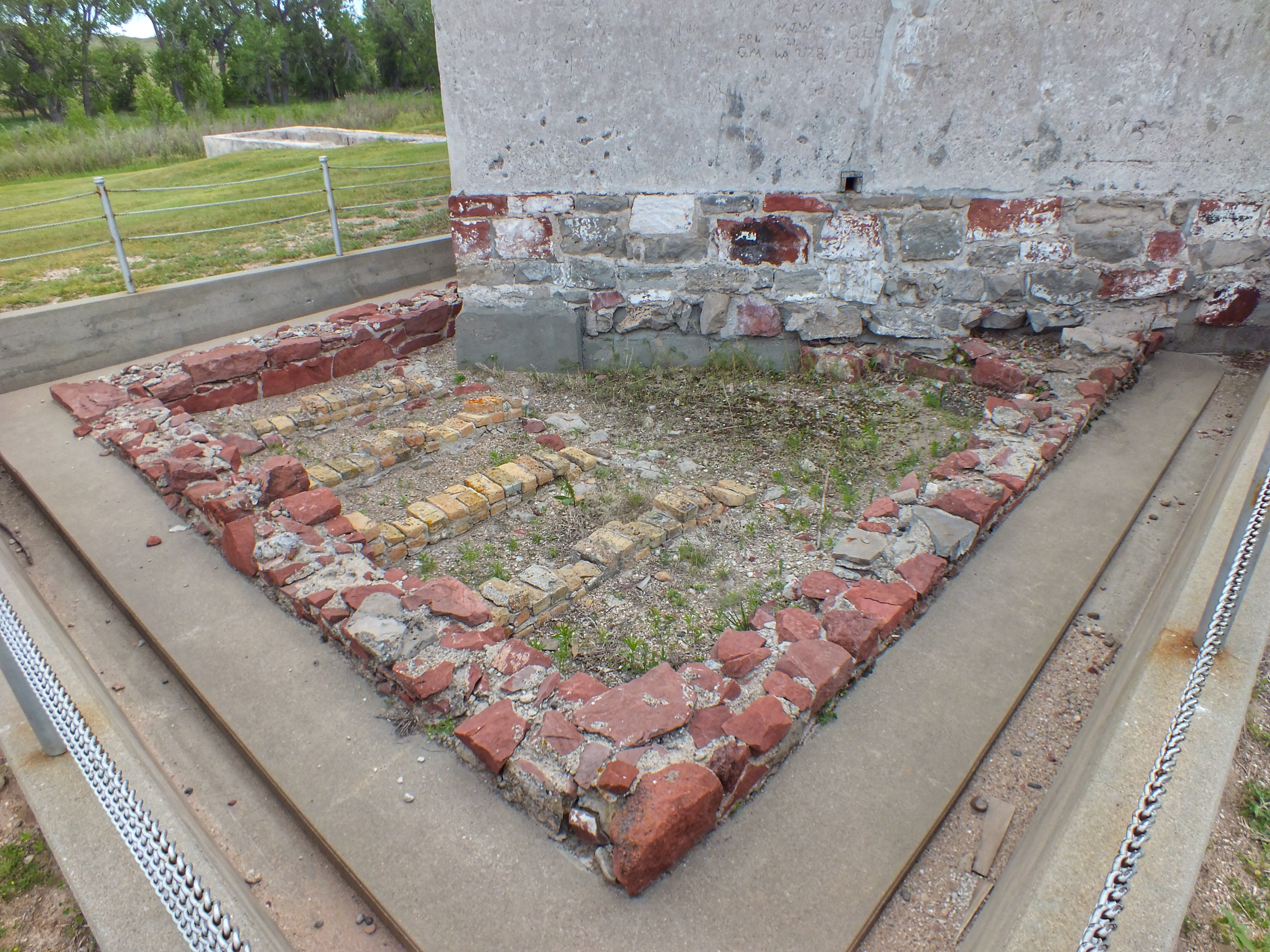 Foundation of the Infantry Barracks, built in 1867. The buildings are (l. to r.) the Magazine, the Post Surgeon’s Quarters, the Lt. Colonel’s Quarters, and the Post Trader’s Store. 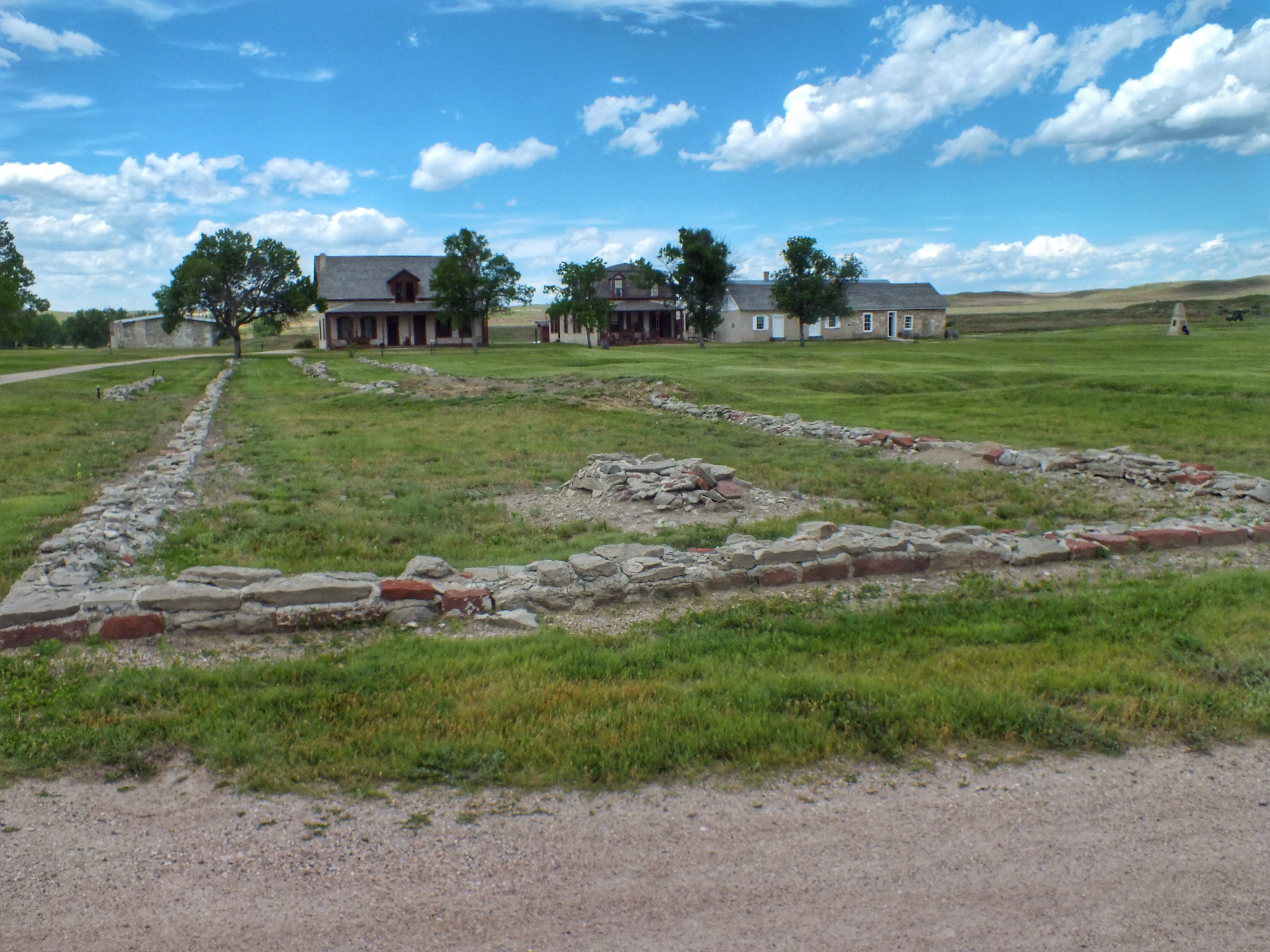 Old Guardhouse, built in 1866. This is the back view—the side facing the river. The cells were downstairs. The quarters of the guards were upstairs. The upper floor is now an exhibit of wagons and artillery. 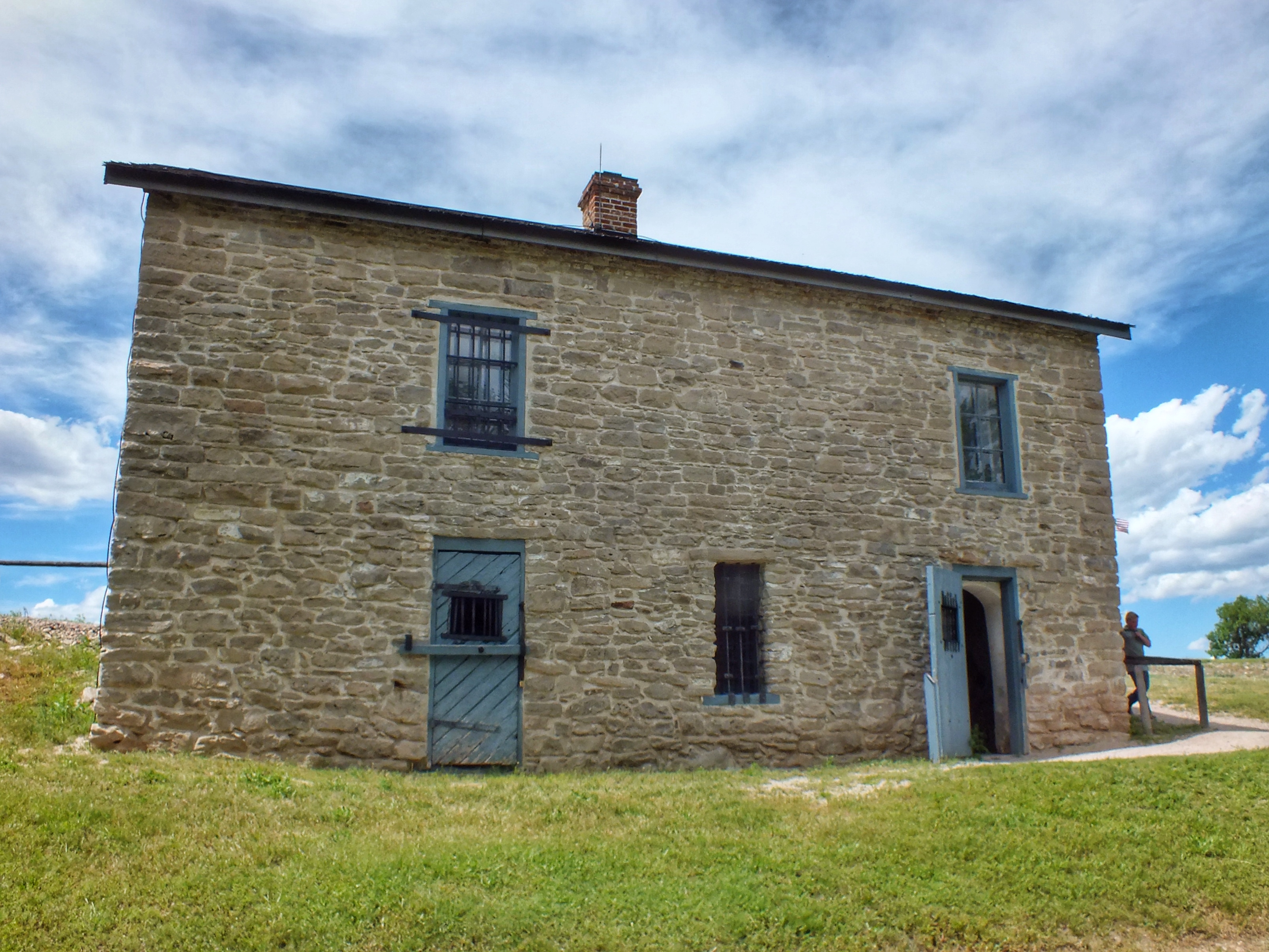 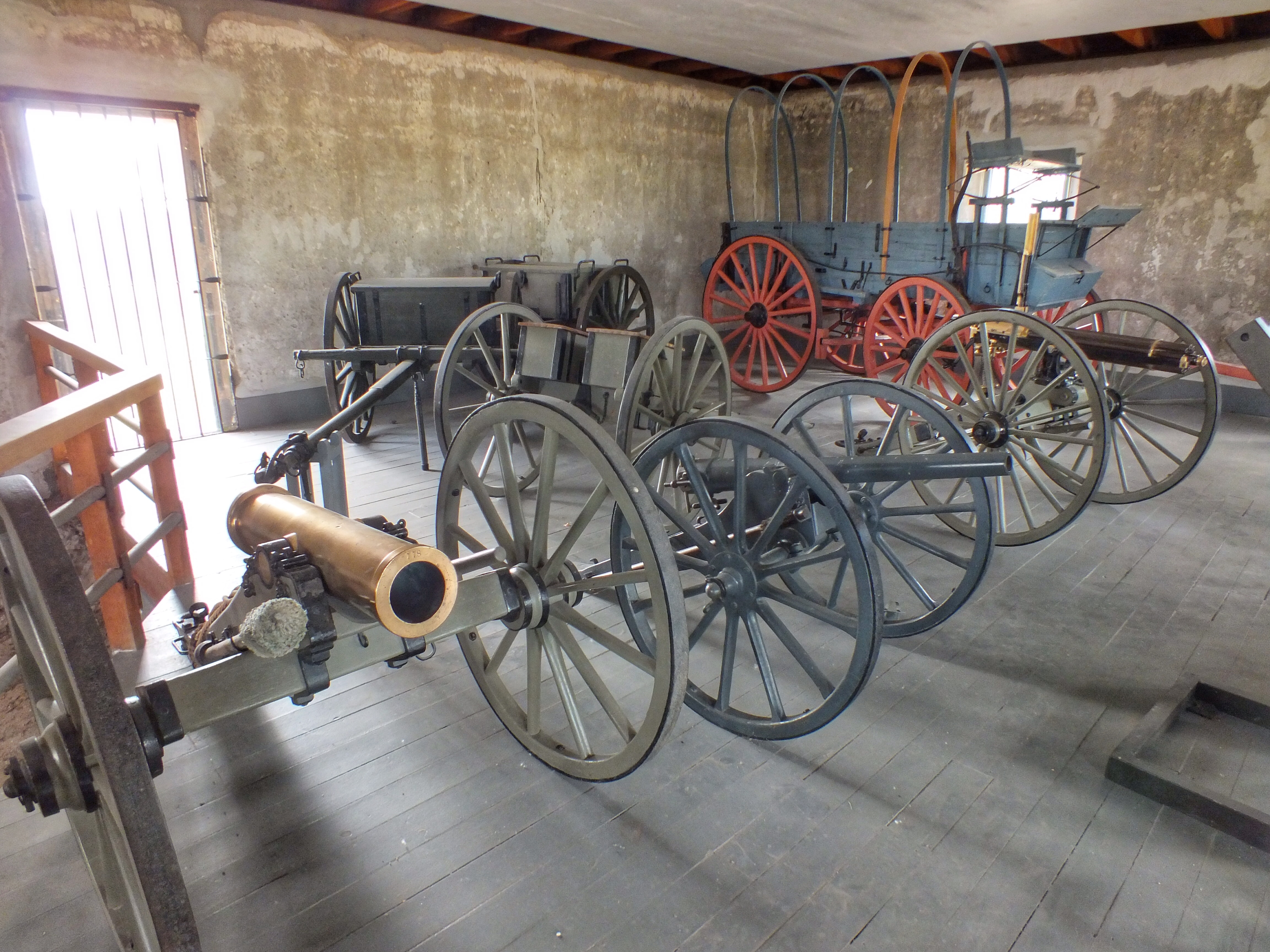 Captain’s Quarters, built in 1870. Two guys on cranes were scraping paint off the upper story while I was there. The second photo is the view from the front porch looking out toward the ruins of the Administration Building (built in 1885). 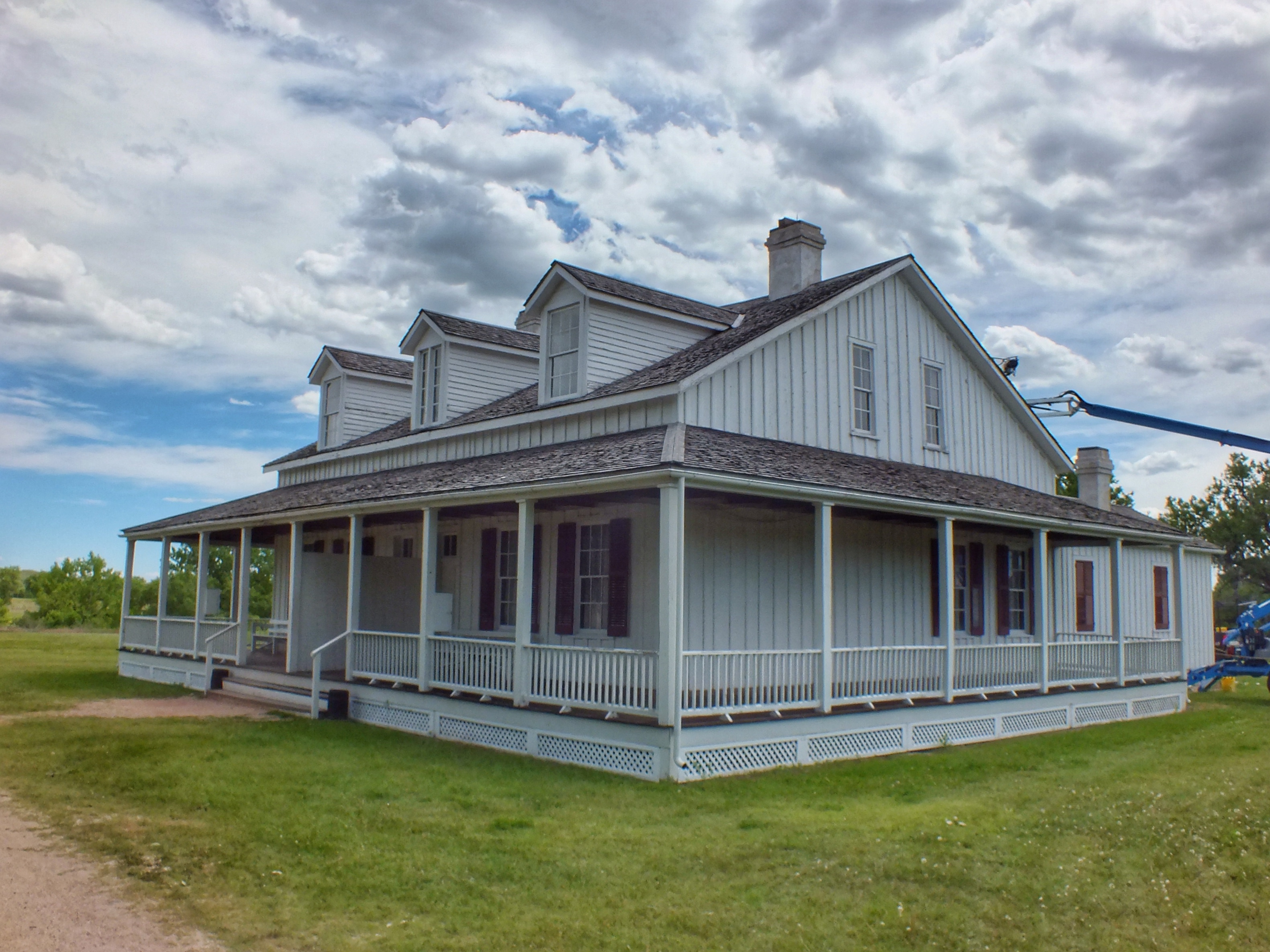 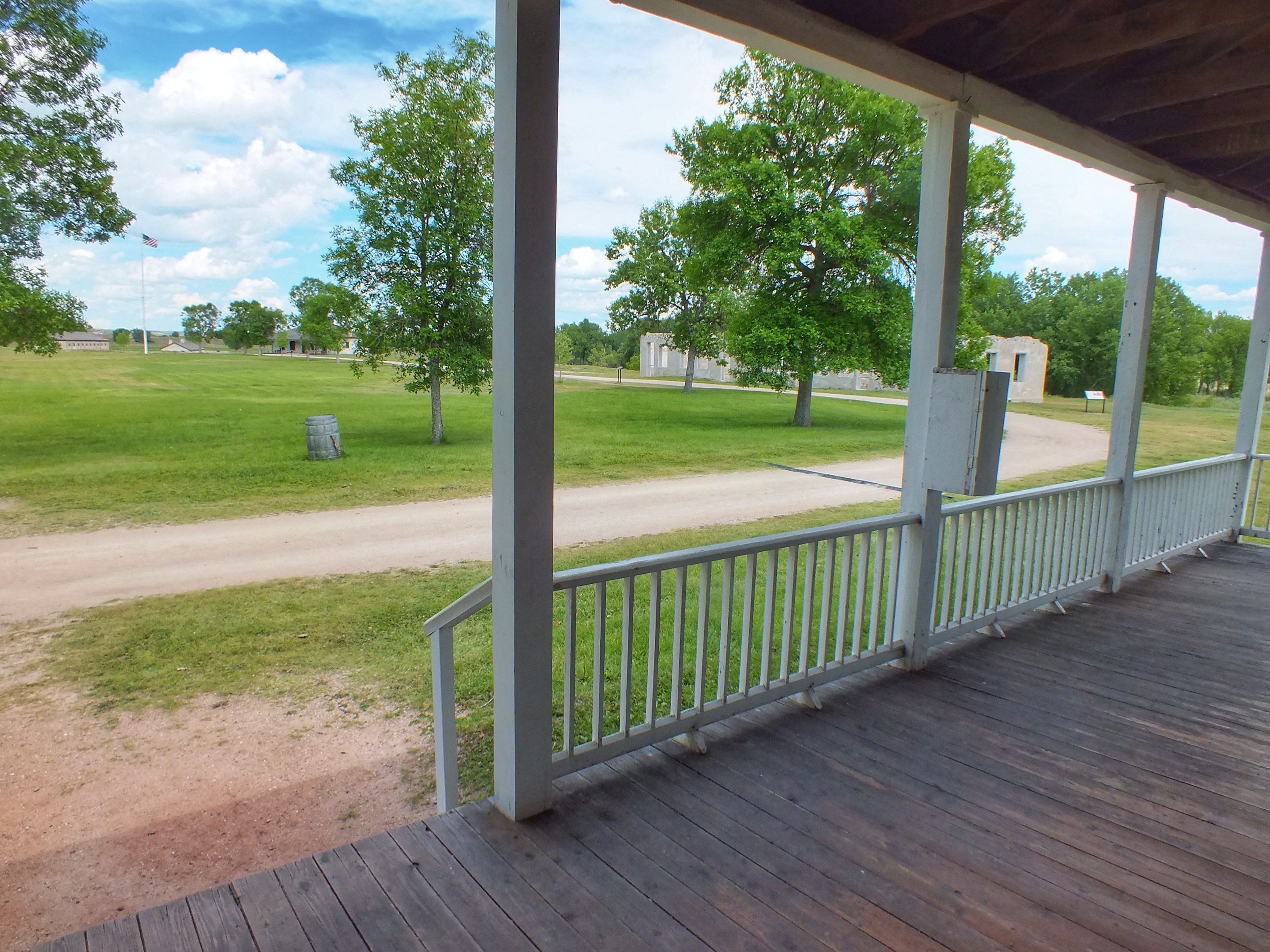 Ruins of Officers’ Quarters with “Old Bedlam” (bachelor officer’s quarters) in the background. 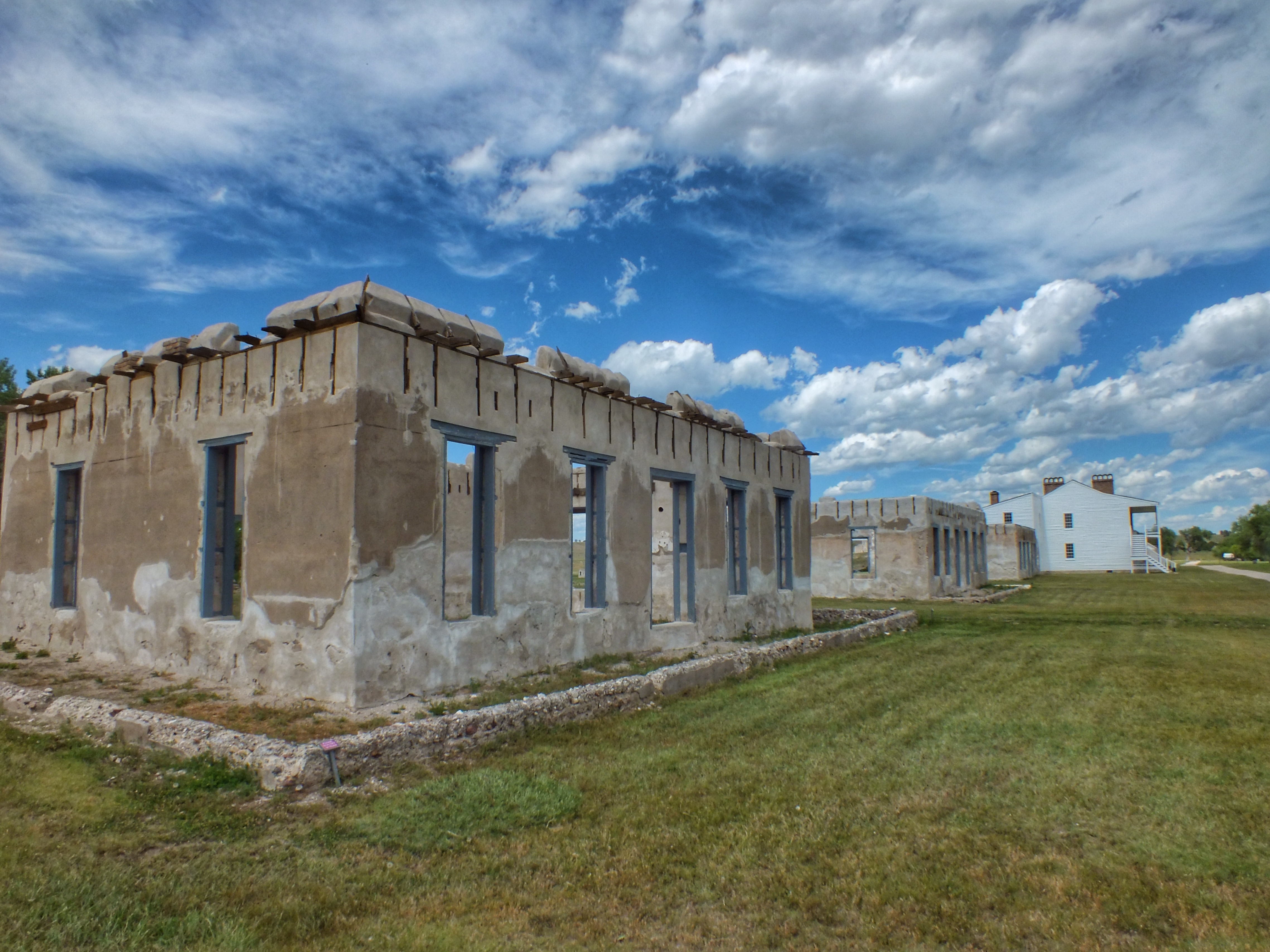 Bachelor Officers’ Quarters, built in 1849. It was known as “Old Bedlam” after the insane asylum in London. It is the oldest standing building in Wyoming, although before it was restored, it was barely standing. 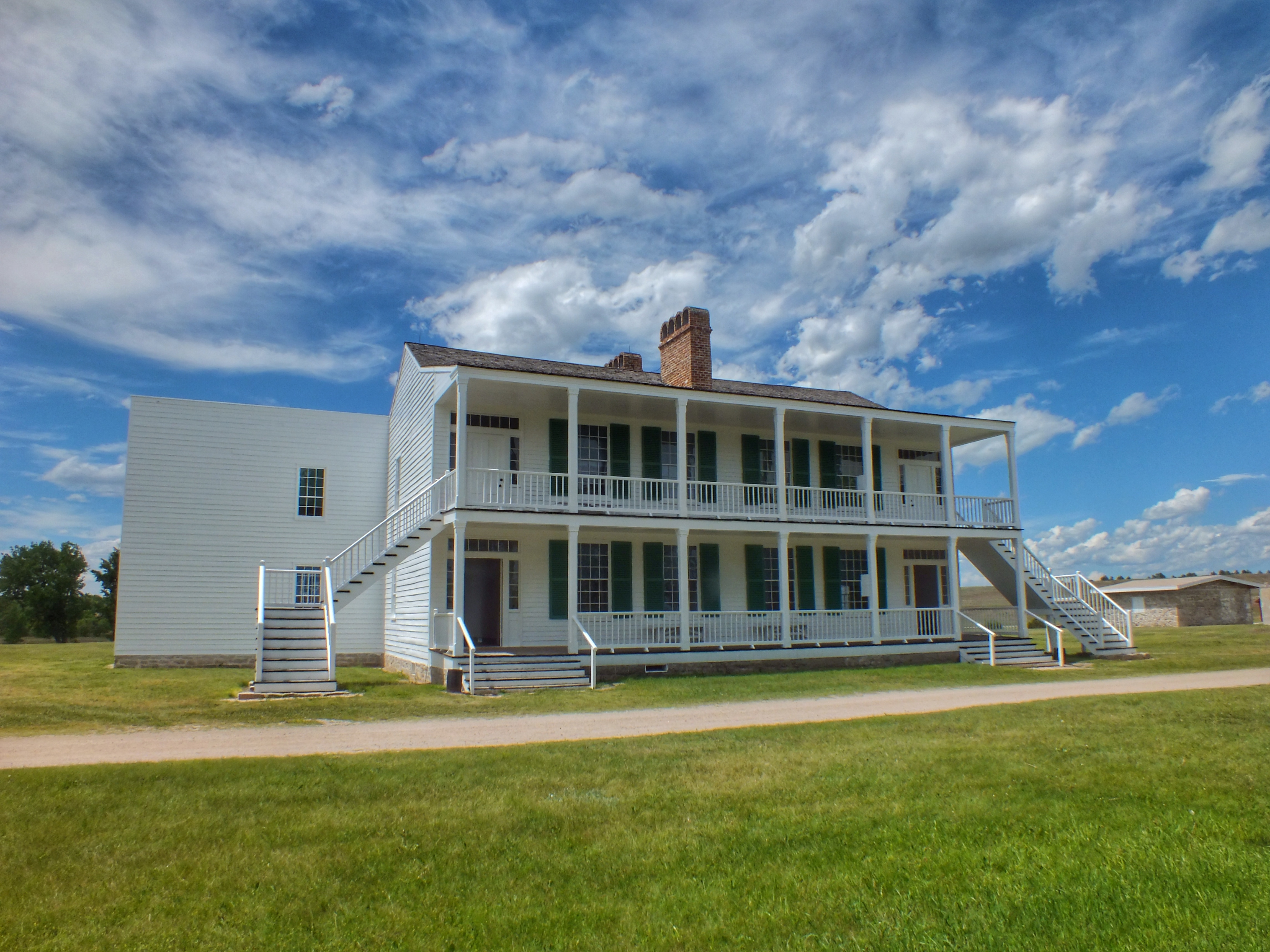 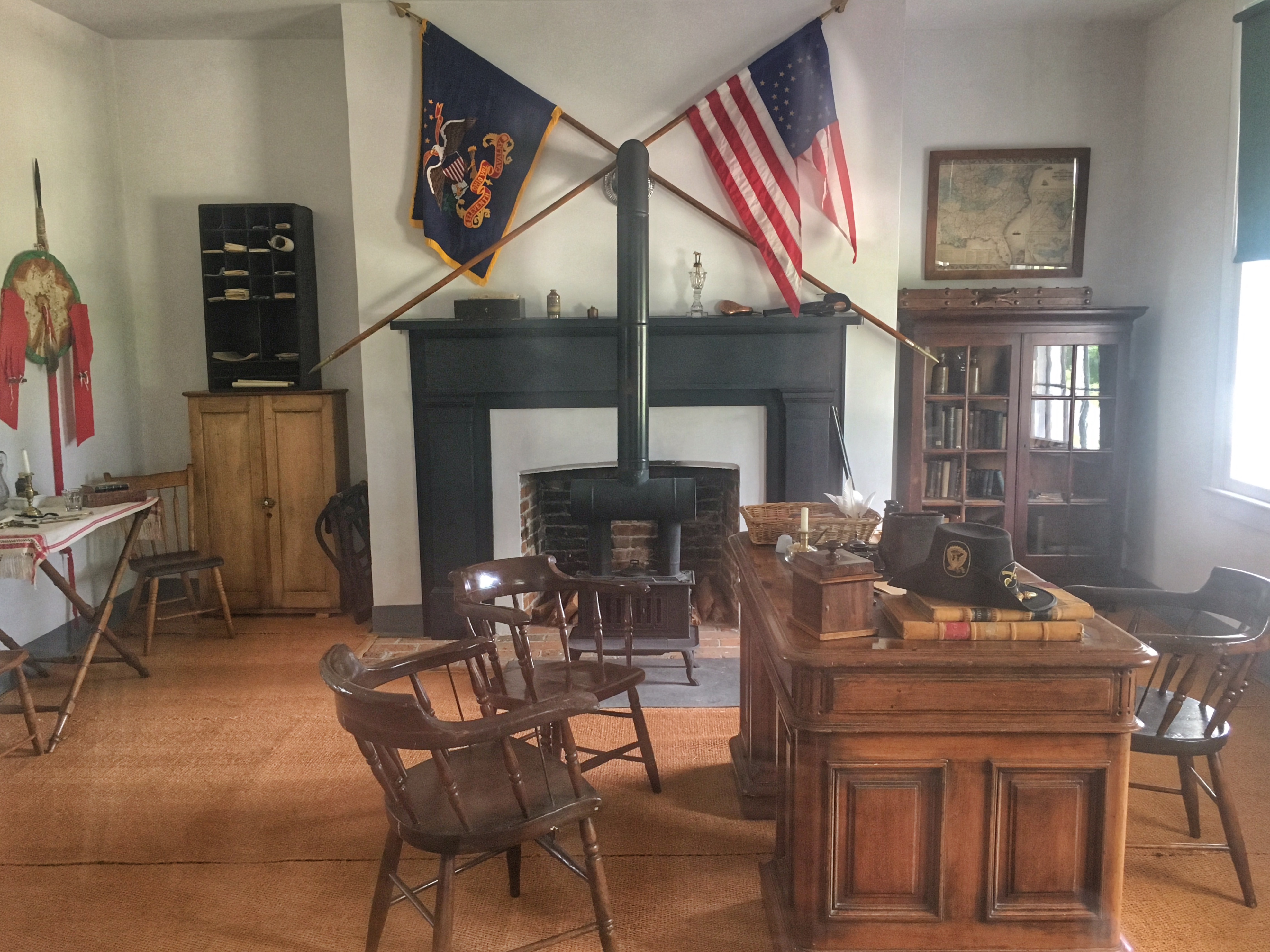 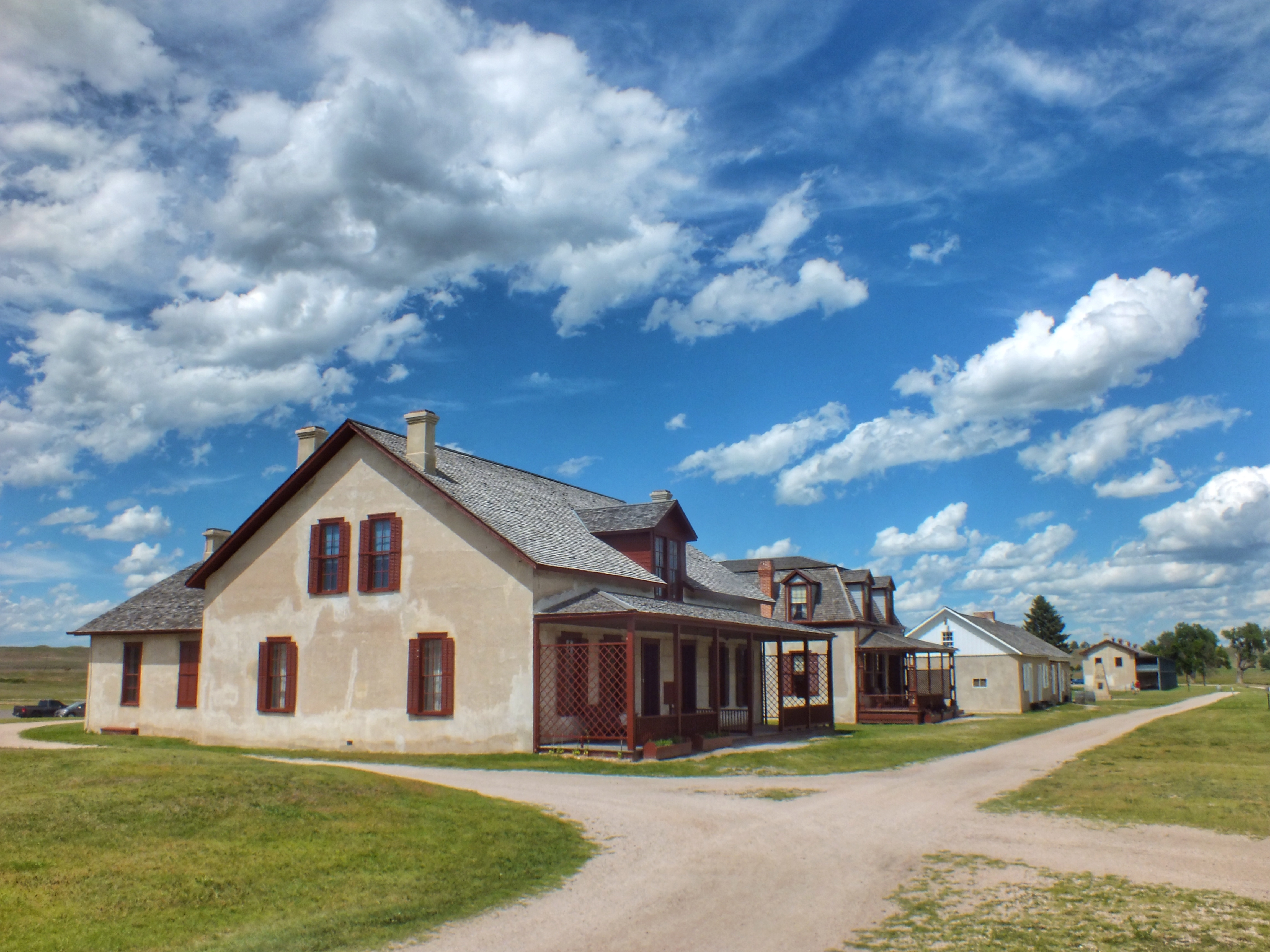 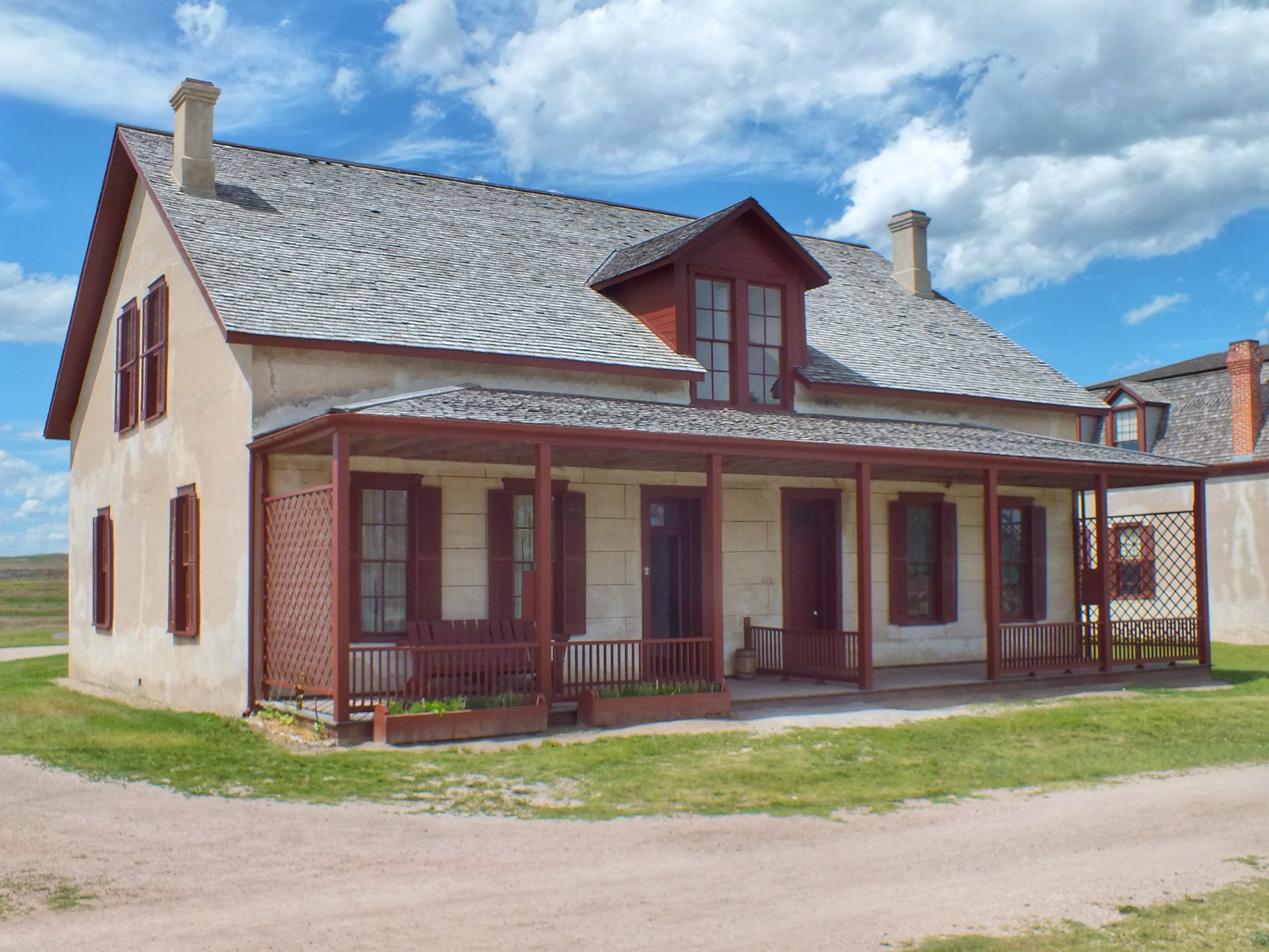 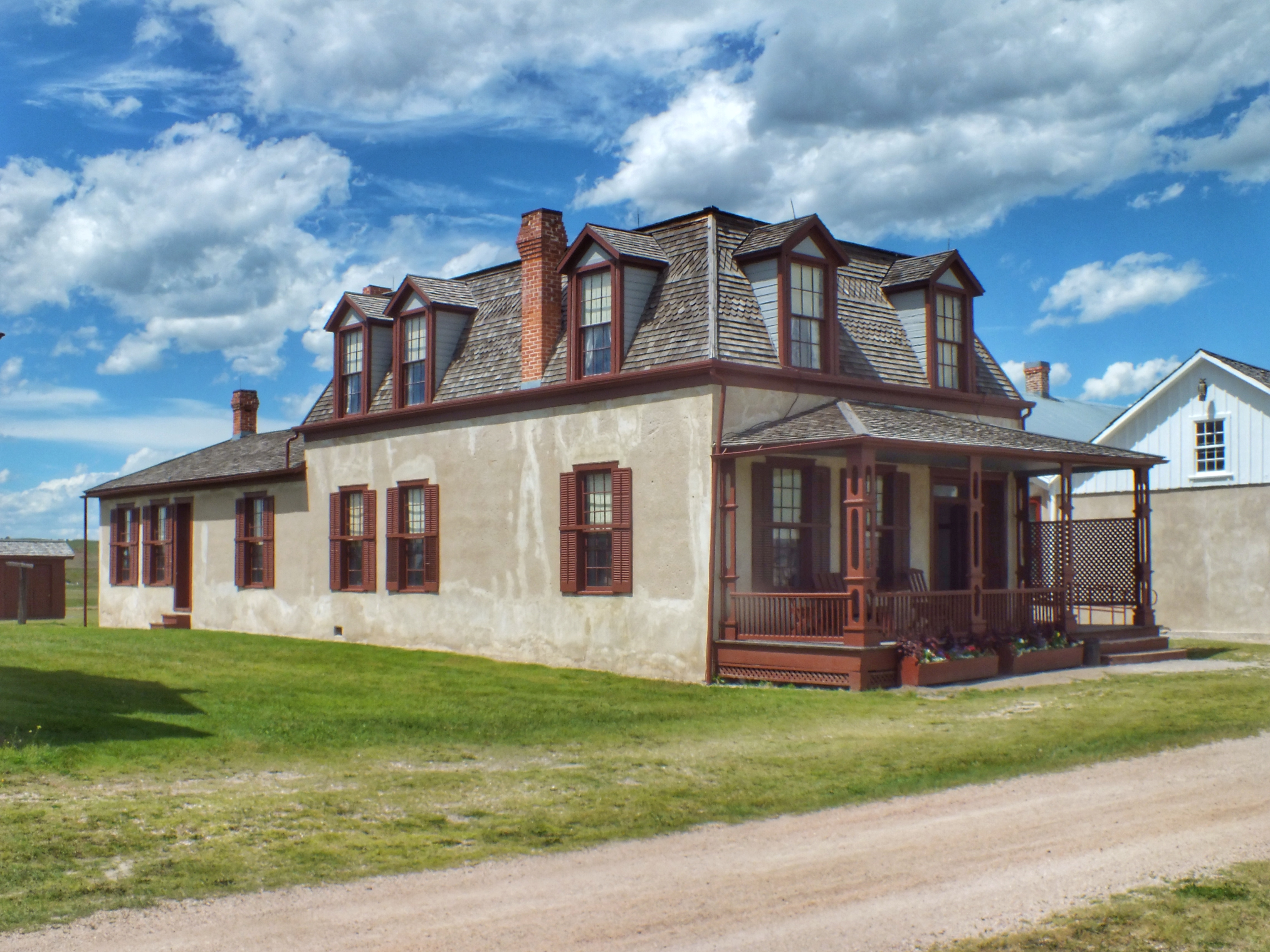 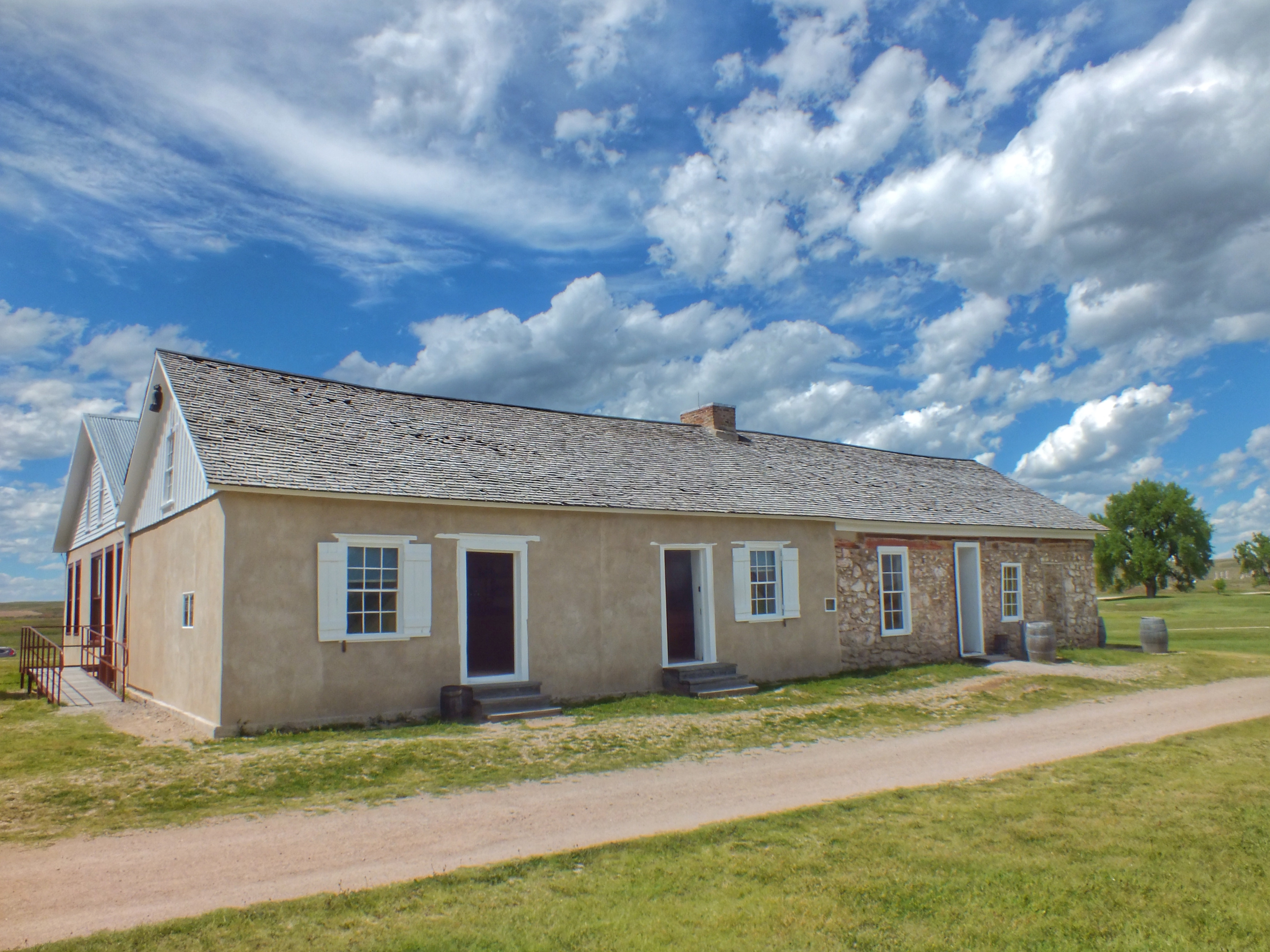 The Post Trader’s Store is only open when a ranger is present, but I happened along at the right time. (I didn’t want him in the photo, so after chatting with him for a few minutes, I walked out a second door. He walked out the first door on the other end, and as soon as he did, I immediately turned around and took the photo. When he realized that I was back inside, he hurried back in to make sure I didn’t steal anything.) 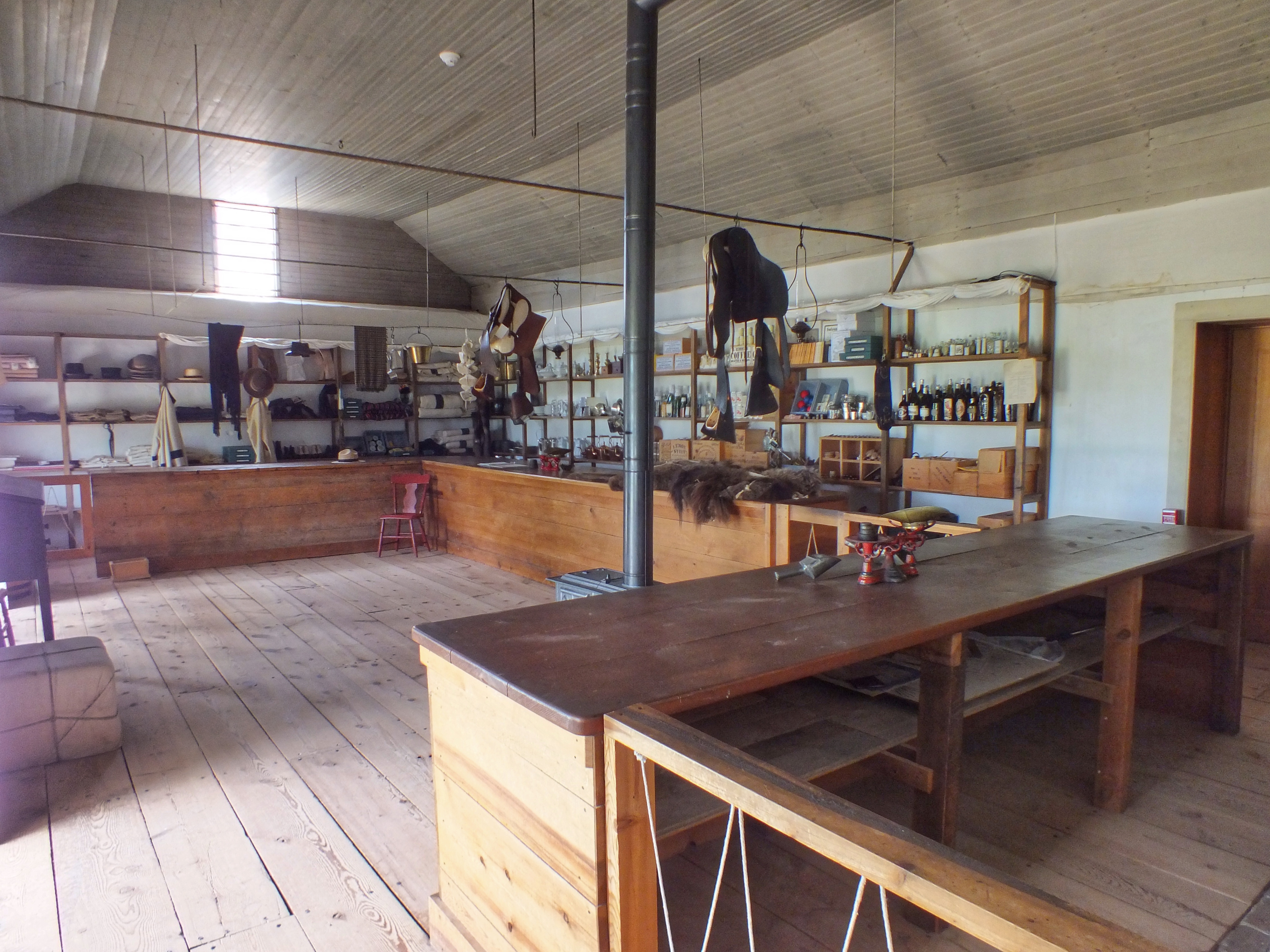 Behind the store was an 1883 addition housing the officers’ club and an enlisted men’s and civilian’s bar. I stopped and bought a birch beer. 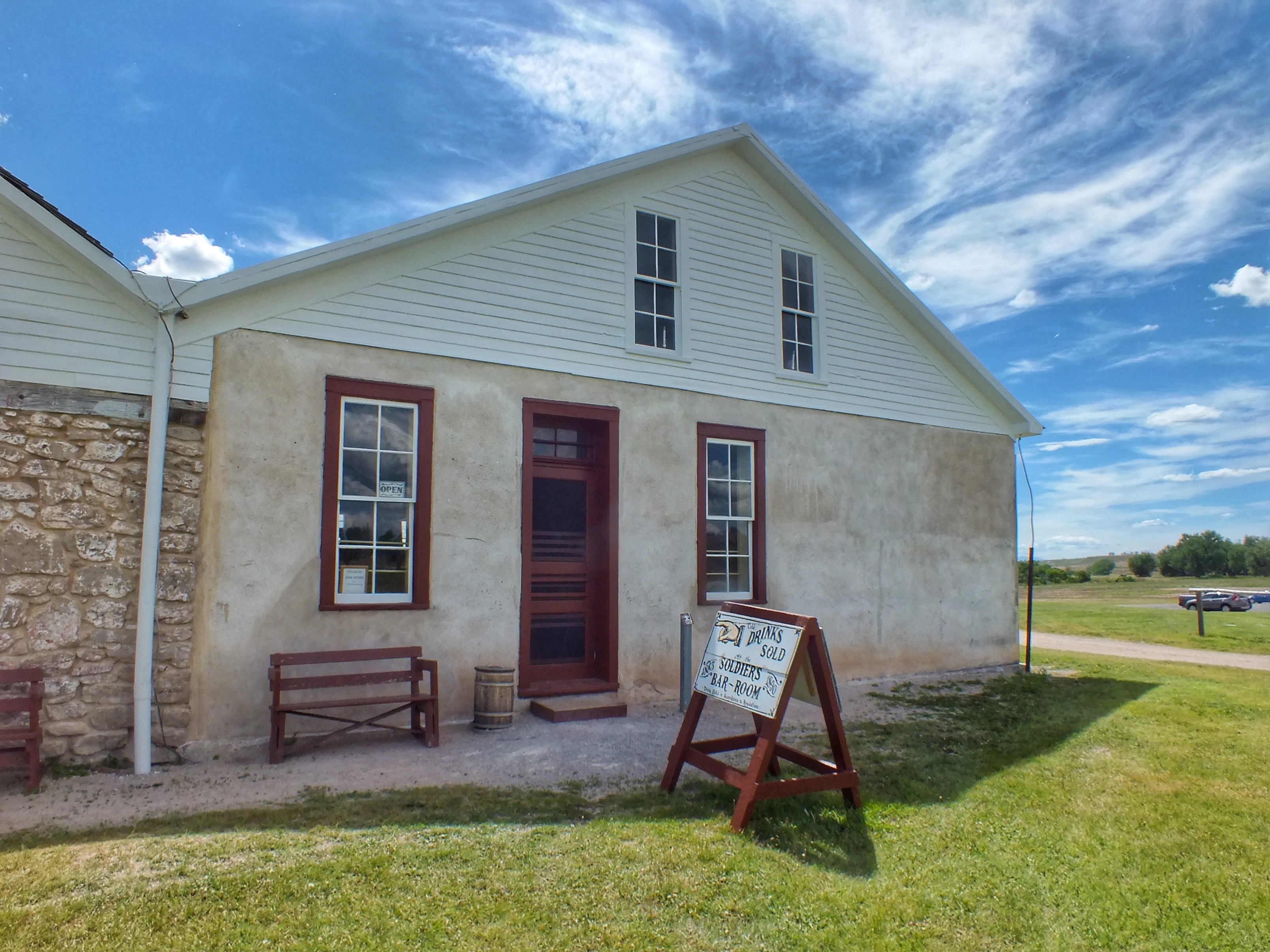 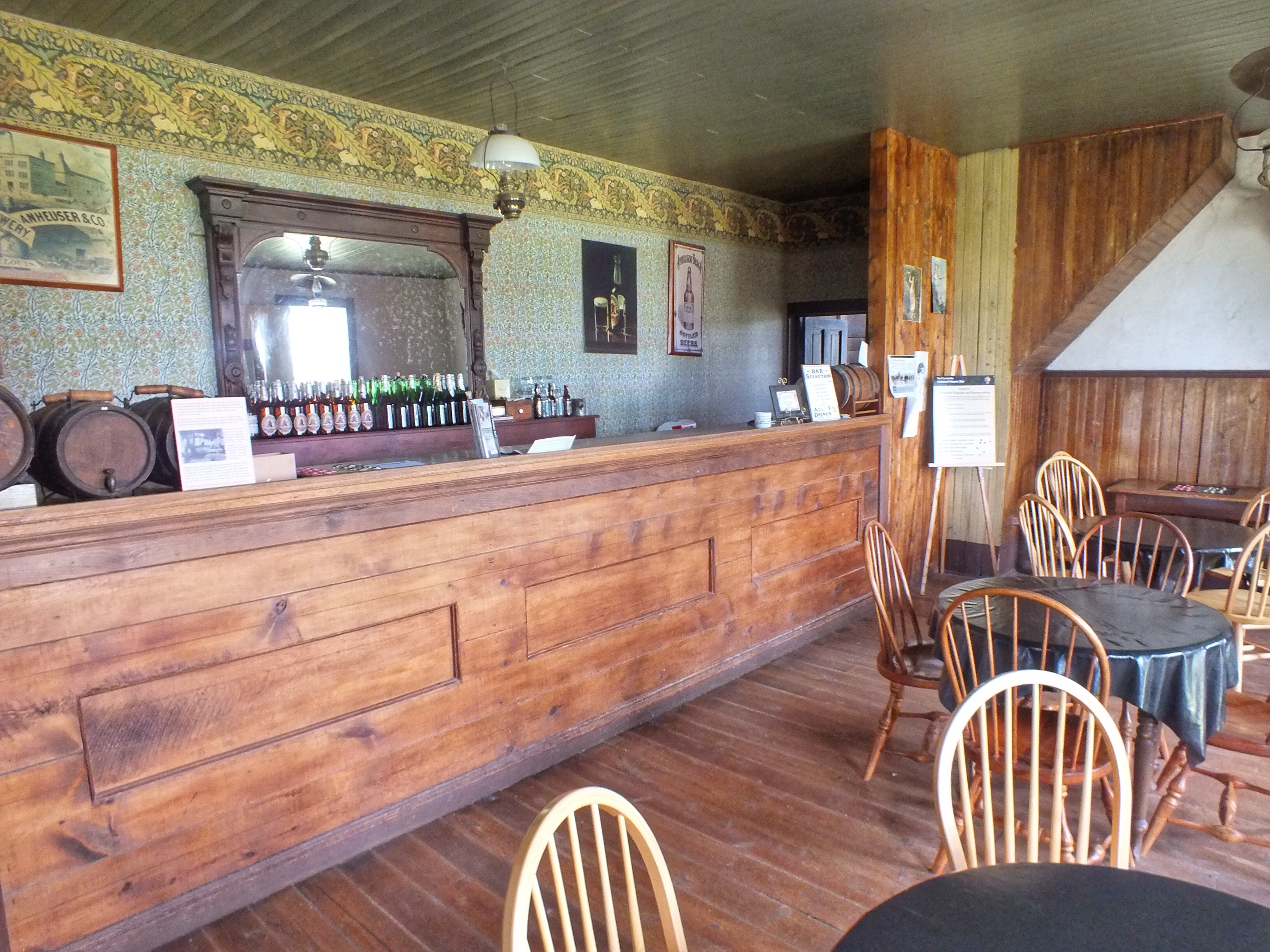 Ruins of the Post Hospital (1873). Beyond it were the ruins of  barracks for non-commissioned officers. 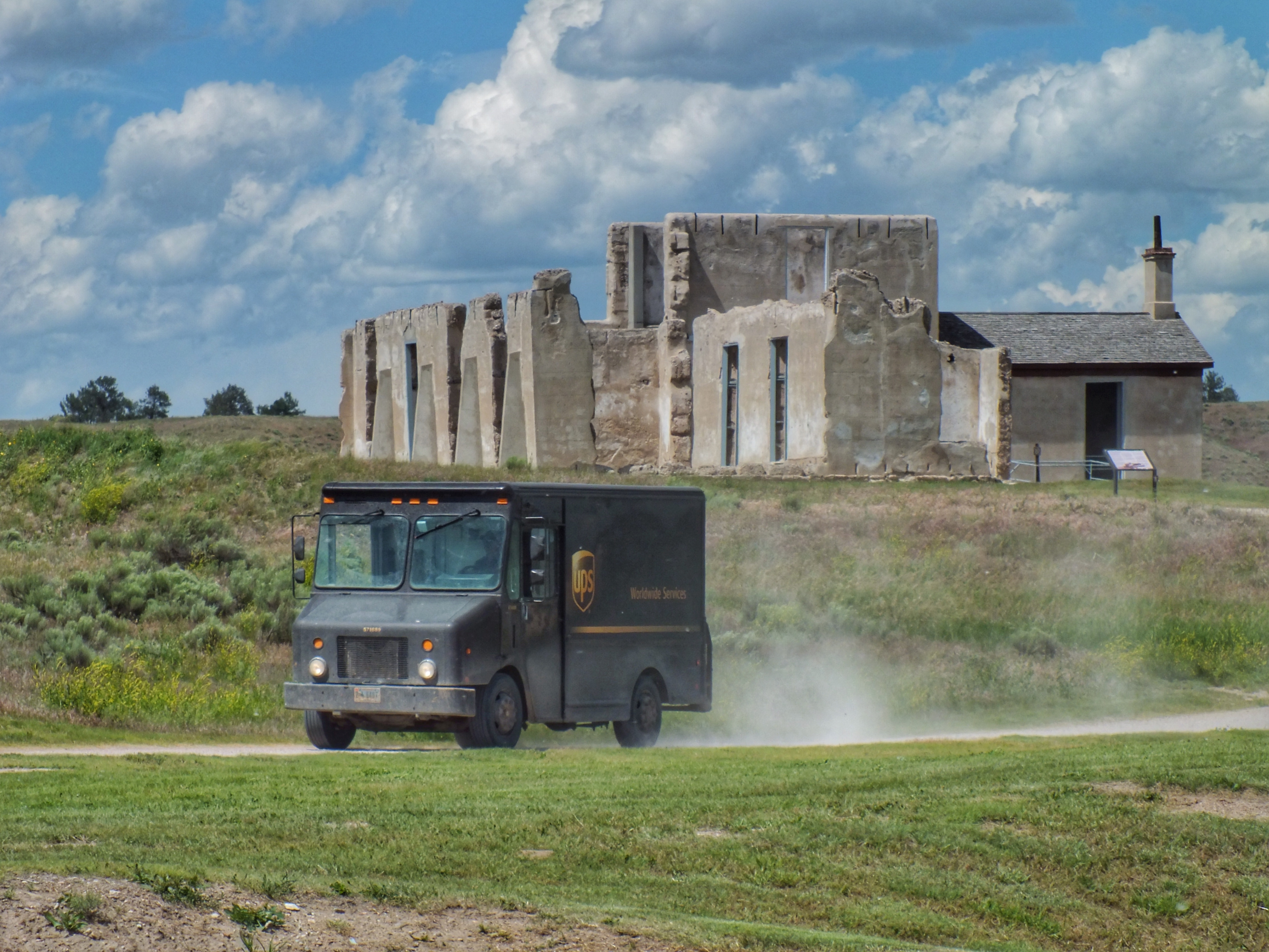 Toward the end of it’s run, after the Indian threat was gone, the railroads were carrying most westbound traffic, and the Army didn’t have much to do, Fort Laramie took on the feel of a town. Three places—in the visitor center displays, in the orientation video, and on one of the signs on the grounds—I was informed that the fort had street lights and even birdbaths! Whoever was in charge of interpreting the fort for visitors evidently thought this was significant.

After I left the fort, I stopped at an antique store in the town of Fort Laramie. The woman who ran the place had a strong German (I think) accent. When she found out I was from Colorado Springs, she told me she used to live there but moved to Wyoming because there was no traffic. Her store was a random collection of mildly interesting junk with no price tags. She wanted to deal, but I couldn’t find anything I wanted. But her store was a palace compared to my next stop.

I stopped at another antique store in the small town of Lingle that turned out to be one small room. It looked like it hadn’t been cleaned or tidied in the last 30 years. In the four minutes it took me to see there was nothing I wanted, the woman who ran the store told me about an autographed cowboy hat. She obviously wanted me to buy it but I hadn’t heard of the guy who autographed it. When she saw I wasn’t interested, she began giving me an item by item inventory of her shop. I escaped quickly, but not before she told me there was another antique store right down the block. I think it might have been run by her husband. When I walked inside, the lights were off. A drunk-looking guy slipped something into a cooler as I walked in. I made a quick survey of the two aisles in the dark while he stared at me. This store too was filled with total junk that hadn’t been tidied or cleaned—ever. I was a bit relieved to escape with my life.

It took me the better part of two hours to get to Cheyenne on nearly empty roads. My plan was to stay the night and then go birding at a prairie in extreme north Colorado in the morning. But Monday had been hot and Tuesday was supposed to be the same. I decided to hit a couple Cheyenne museums instead. I found a Panera and ate supper while making plans. Then I looked for a hotel. My first choice was filled. I sat in the lot and looked for other options. Everything was filled or very expensive, except for La Quinta, which received terrible reviews. Since Cheyenne is close enough to be a day trip, I decided not to force things. I headed home. This was a little challenging because I had already mentally shut it down for the night, but I played my music loudly and sang along and made it safely  home around 9:30 after three extremely interesting and fun days.