The weather on Christmas Eve was beautiful — finally. We headed for Fort Pillow State Park, a Civil War site I’d never visited even though I’d passed it probably 30 times in my life while heading to visit family in Arkansas. There’s this thing called the Mississippi River in between I-55 and the park and no bridges between Dyersburg and Memphis.

But we were on the right (east) side of the river this time. I checked the web site to make sure it was open on Christmas Eve. It clearly stated that it was open seven days a week except Thanksgiving and Christmas. You know where this is going, don’t you? 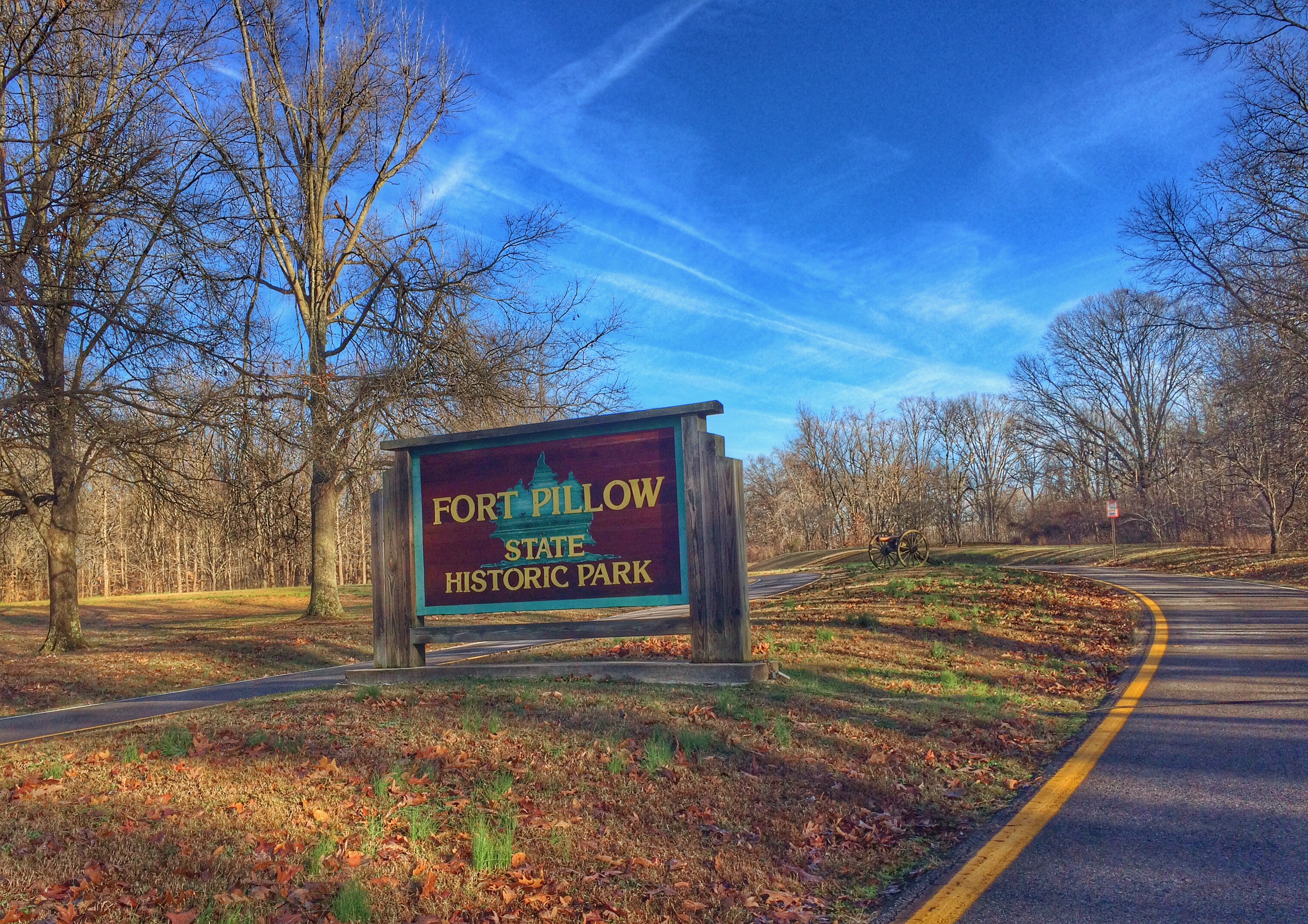 The park entrance is 19 miles off the main highway, and the visitor center is another three miles from the park entrance. The highway passes through the middle of the West Tennessee State Penitentiary. We drove the 22 miles in a state of high expectation and arrived at the visitor center to find a small sign that said “Closed.” That’s all. No explanation. There was a box with brochures nearby. I took one and turned it over and read 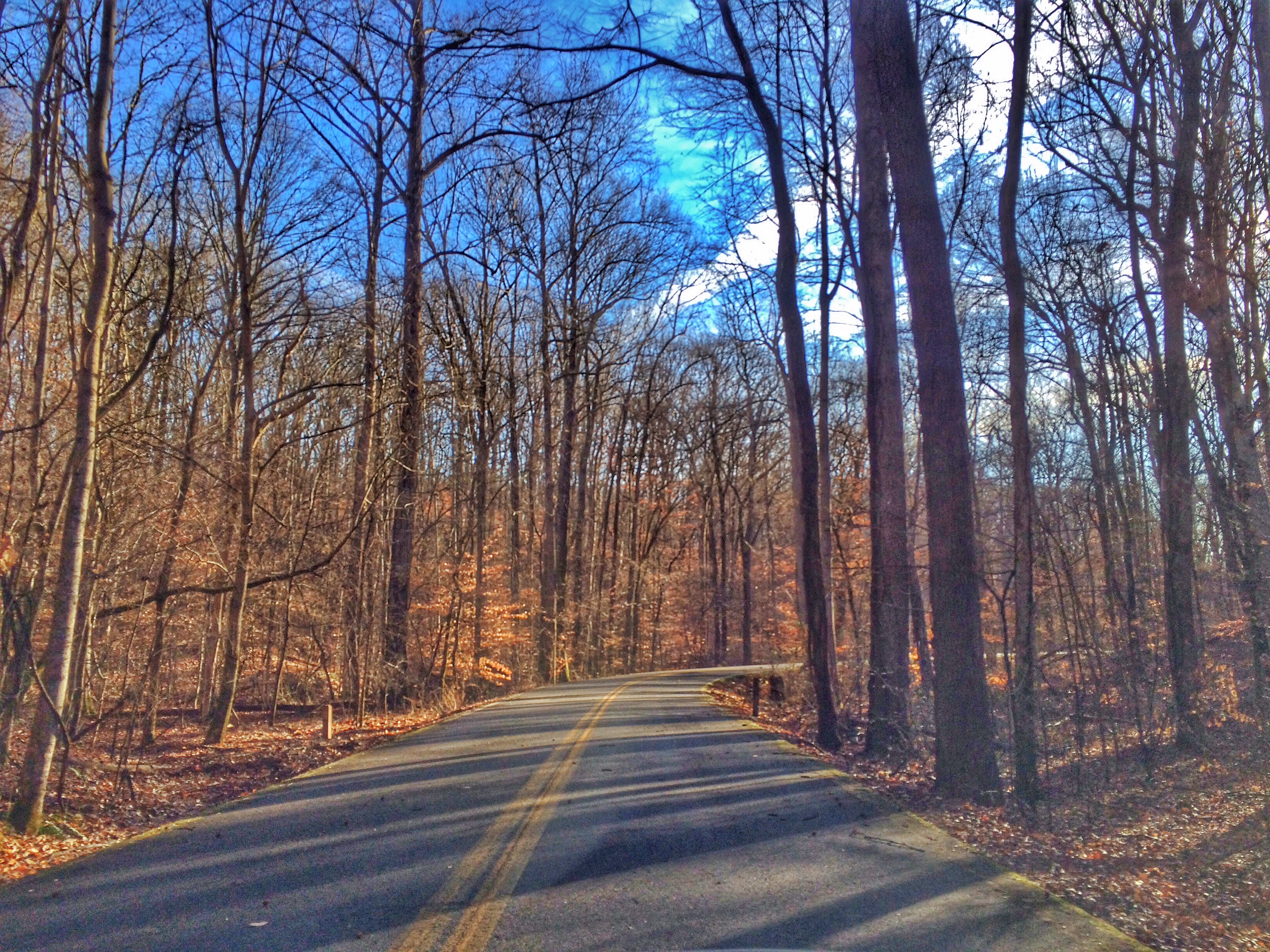 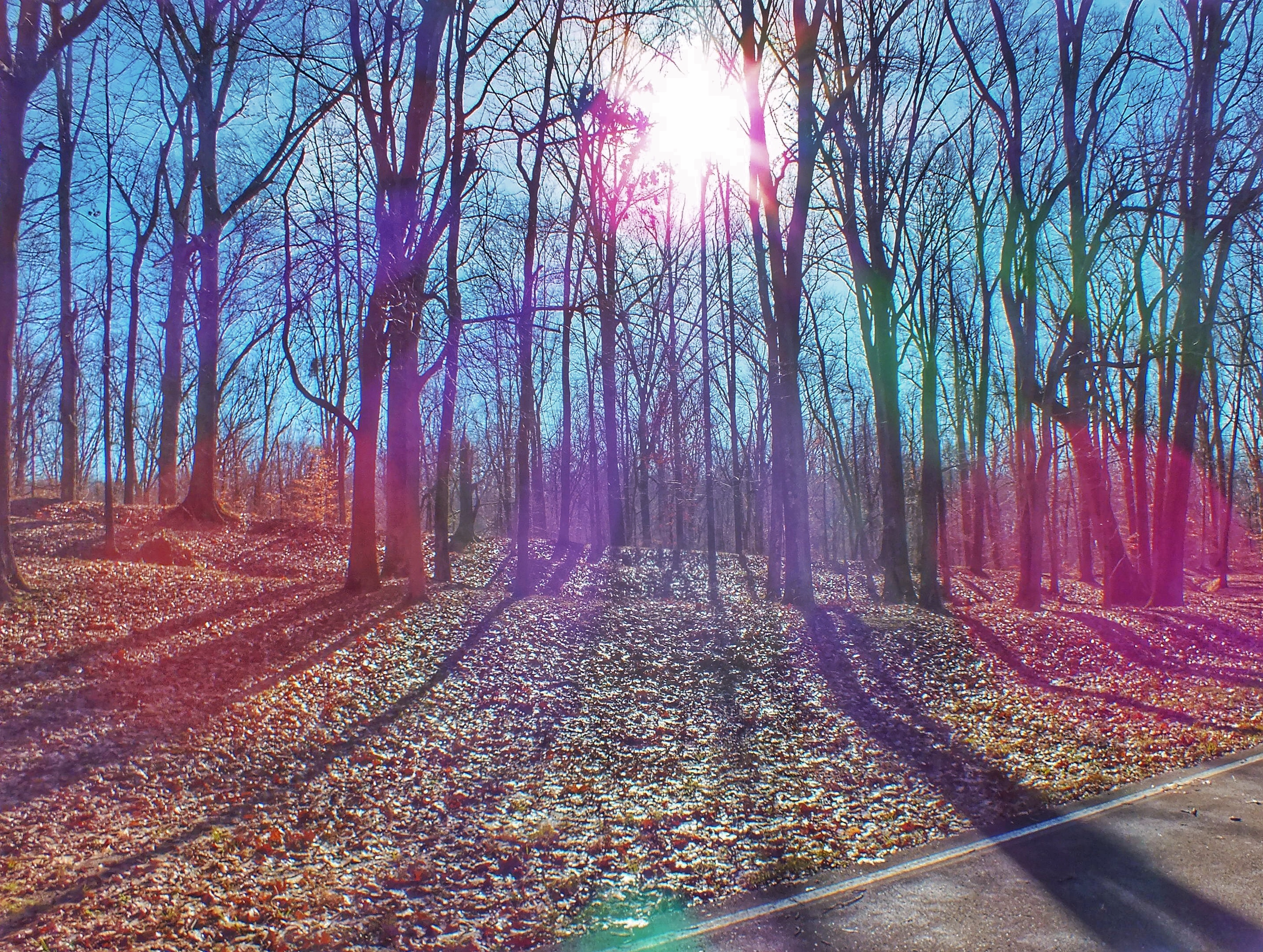 Anyway, it was a nice day and there were remains of the fort walls all around and a sign at the beginning of a trail pointing to a section of restored fortifications where the primary battle took place. We decided to take a walk.

In short, the Confederates built the fort here in 1861 to guard the Mississippi. They named it after General Gideon J. Pillow. They evacuated the position in mid-1862 after the Battle of Shiloh. Union troops, many of them from Black units, occupied the fort in 1863, using only a portion of the works and a much smaller force. On April 12, 1864, the fort was attacked by a force led by General Nathan Bedford Forrest. With the advantage of surprise and elevation, the Confederates overwhelmed the defenders. A huge percentage of Black troops were killed, and the battle is generally considered to have been a massacre. 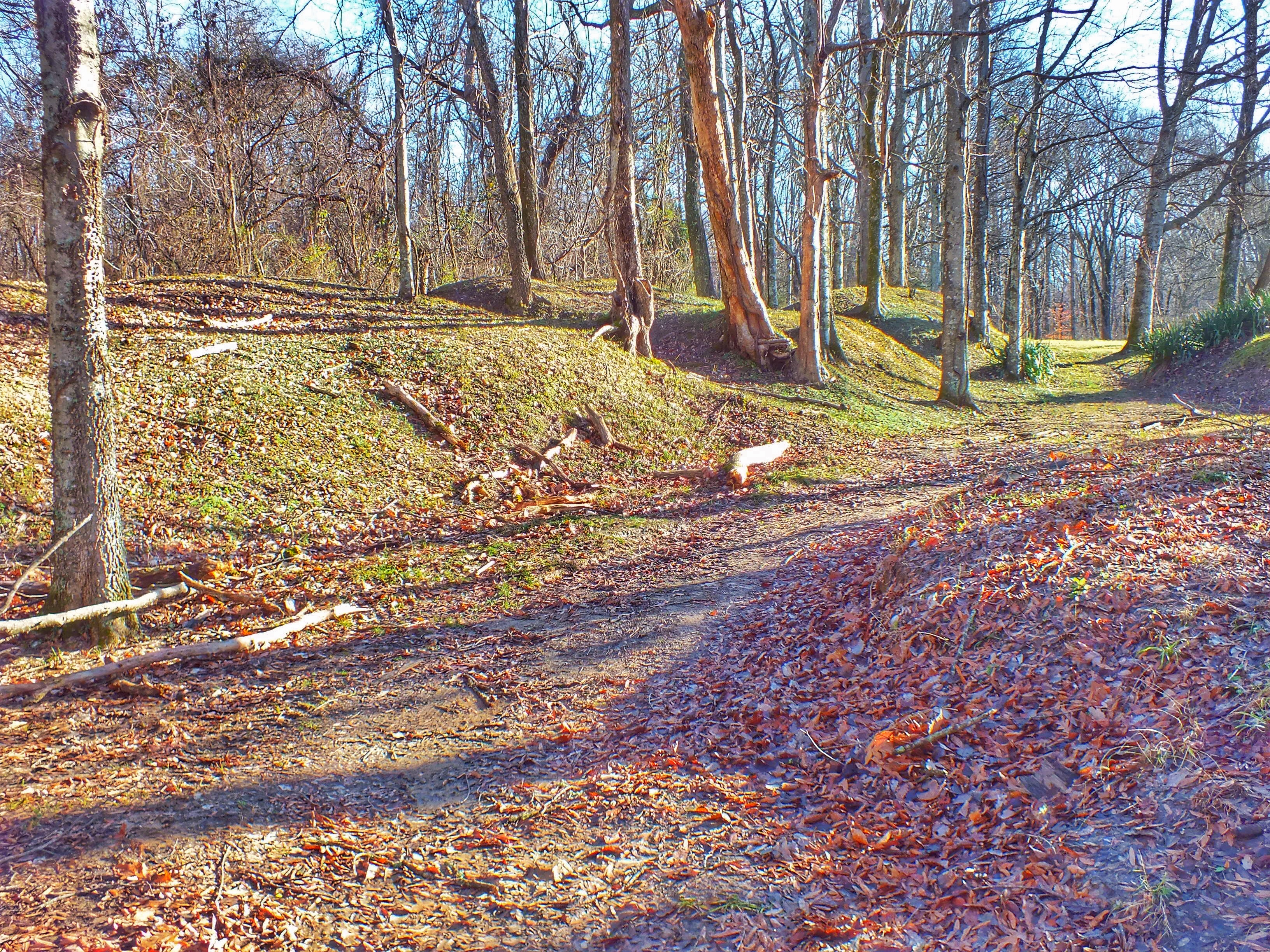 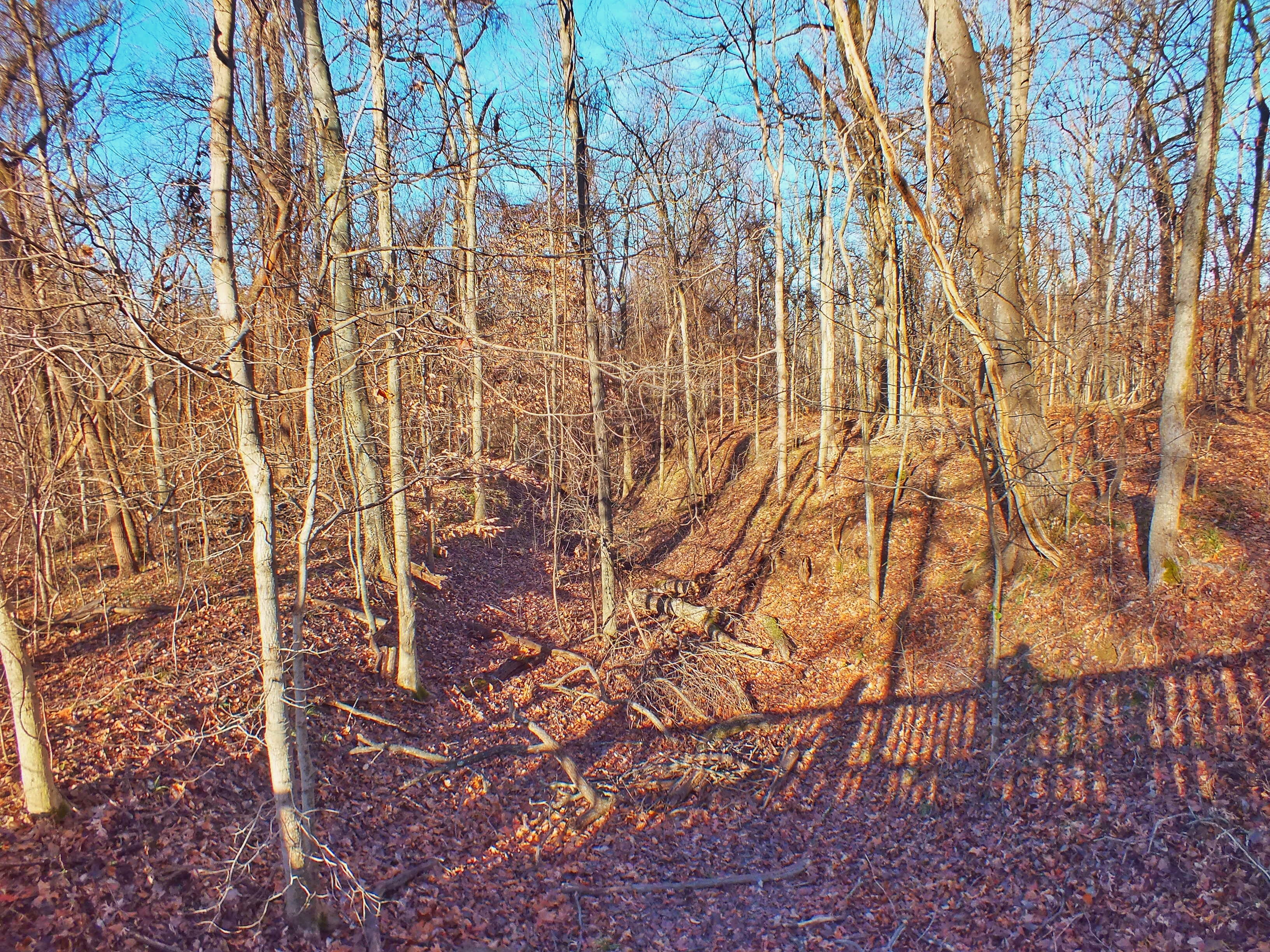 We walked down one hill and up another. The trail cut through a patch of woods, down an old road bed, along a power-line clearing. We kept seeing signs that the “restored fortifications” were just ahead. After about a mile and a half, my wife’s hip began hurting. We reached a ridge overlooking The Chute, a former section of the Mississippi that has been cut off and now, although forming the border of Arkansas and Tennessee, is on the east side of the river. 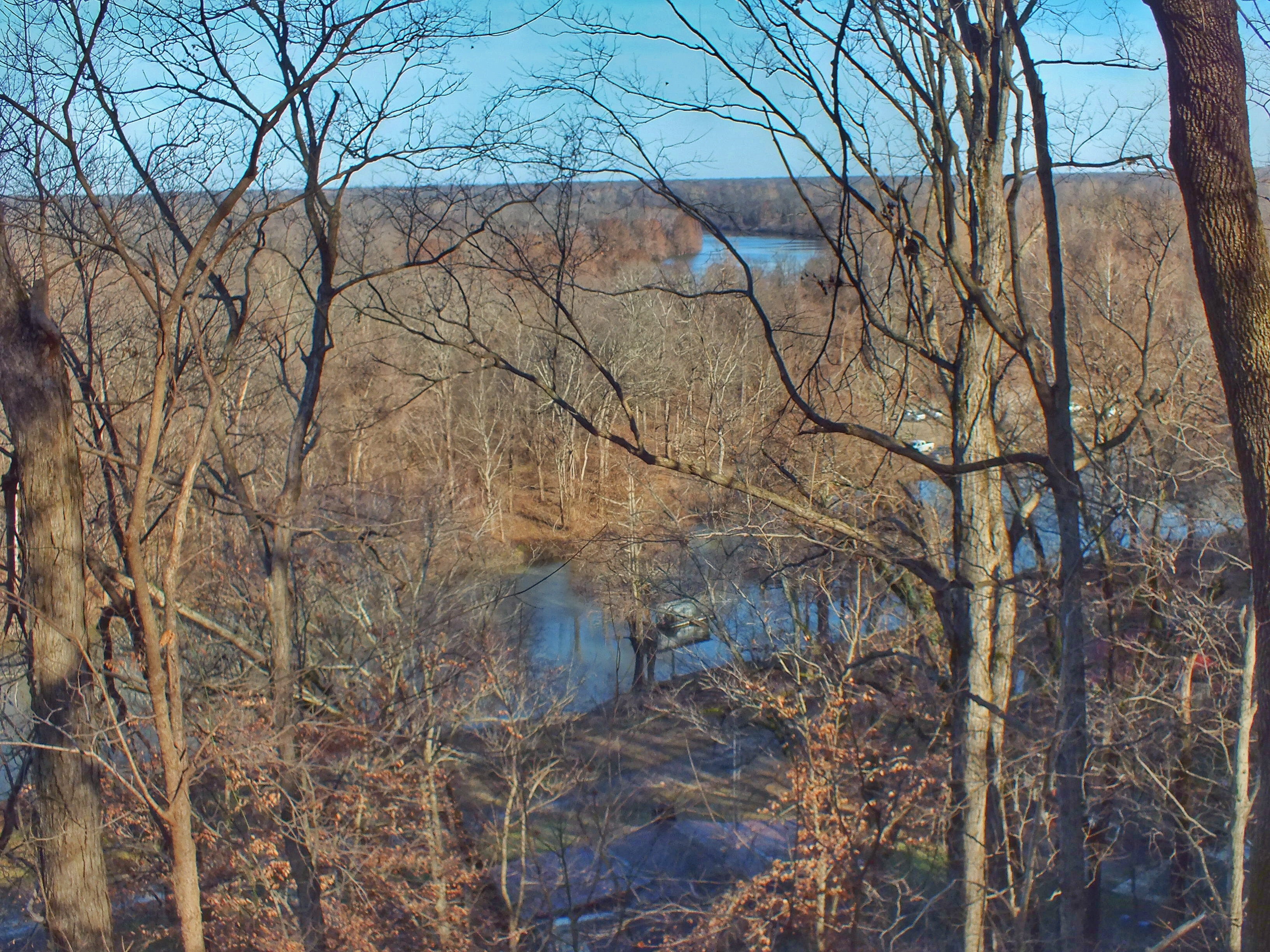 A sign — Restored Fortifications — pointed to a trail that led down the bluff toward the water. There was a road down there, and I figured we could have probably driven to our destination. We decided to go back and try from the other direction. We walked perhaps a mile back along a paved road. When we got to the point where the trail left the road, I left my wife sitting in the Red Chair in the woods and went back for the car. 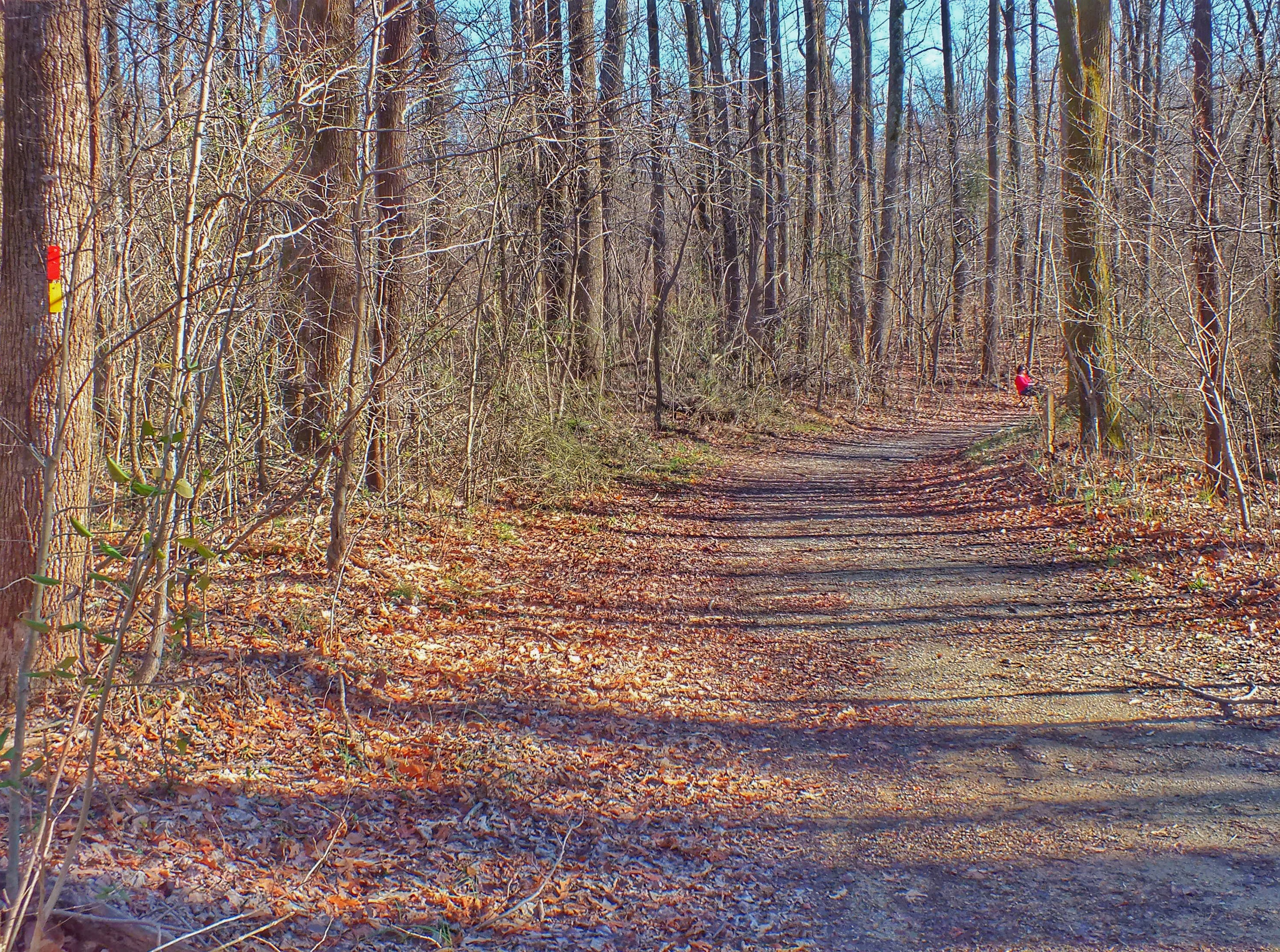 I was a little insecure about abandoning her there. I ran part of the way back to the car and got there much quicker than I had anticipated. I started driving, but when I didn’t come upon another park road, I looked at the brochure map. That’s when I discovered that the road I’d left her next to wasn’t in the park. Although I was only half a mile from her by trail, I was about eight or nine miles away by road.

I won’t say I panicked, but I felt like a jerk. My wife isn’t all that into battlefields, although she likes a nice hike. I didn’t know exactly where she was (unless I walked back on the trail) and I thought she’d probably think I was gone a long time. I sped through the park, far exceeding the speed limit, turned onto the state road and watched for the turn off to the road where she was waiting. When I got to the road, I was further befuddled. The name of the road on the brochure was Cold Creek Road. On the sign, it was called Crutcher Lake Road. What to do?

An electric company truck was parked a short way down the road. A guy in uniform was just packing up the last of his stuff to leave. I stopped and asked if this was the way to the fortifications. He said no, that I’d have to go back to the main park entrance. I didn’t want to tell him I’d left my wife in the woods, so I said that I’d been there already and thought there might be an easier way down this road. He wasn’t sure. So I showed him the map and told him I was looking for Cold Creek Road. He pondered and replied that Cold Creek could be reached by driving down the road. He was a very friendly guy and would have chatted for hours. I was in a hurry. I cut him off, thanked him profusely (to lessen my rudeness) and sped off.

Finally I arrived at the bend. I could just see my wife’s red shirt off in the woods. I’m sure nobody else driving on the road would have noticed. She saw me and came walking with the chair.

I apologized over and over, but she wasn’t sure why. She agreed that it would have made more sense for her to have walked the rest of the trail with me, but we hadn’t known. She said I was gone maybe half an hour and that she had enjoyed a nice, quiet rest on a nice day.

We drove down to the bottom of the bluff but saw no way to get to the fortifications. (I think the place where we turned around on the trail was probably very close to them.) So we left. It was not at all the way I’d planned the morning to go.

This entry was posted in Battlefields, Red Chair. Bookmark the permalink.