I took today and tomorrow off work to get my 2020 year list off to a fast start. I spent almost all the daylight hours at Lake Pueblo, first by the south marina where the gulls hang out and then below the dam.

I arrived shortly after dawn on a cold, overcast day. I walked about 20 yards and went back to the car for layers and gloves. I headed out to the tip of the peninsula to get close to the tire breakwater where the gulls hang out. Somehow in the midst of the huge flock of Ring-billed Gulls, I spotted a winter-plummaged Dunlin. It’s that small brown sandpiper in the very center of the photo. I only bother with this photo because it’s a very rare bird around here this time of year. 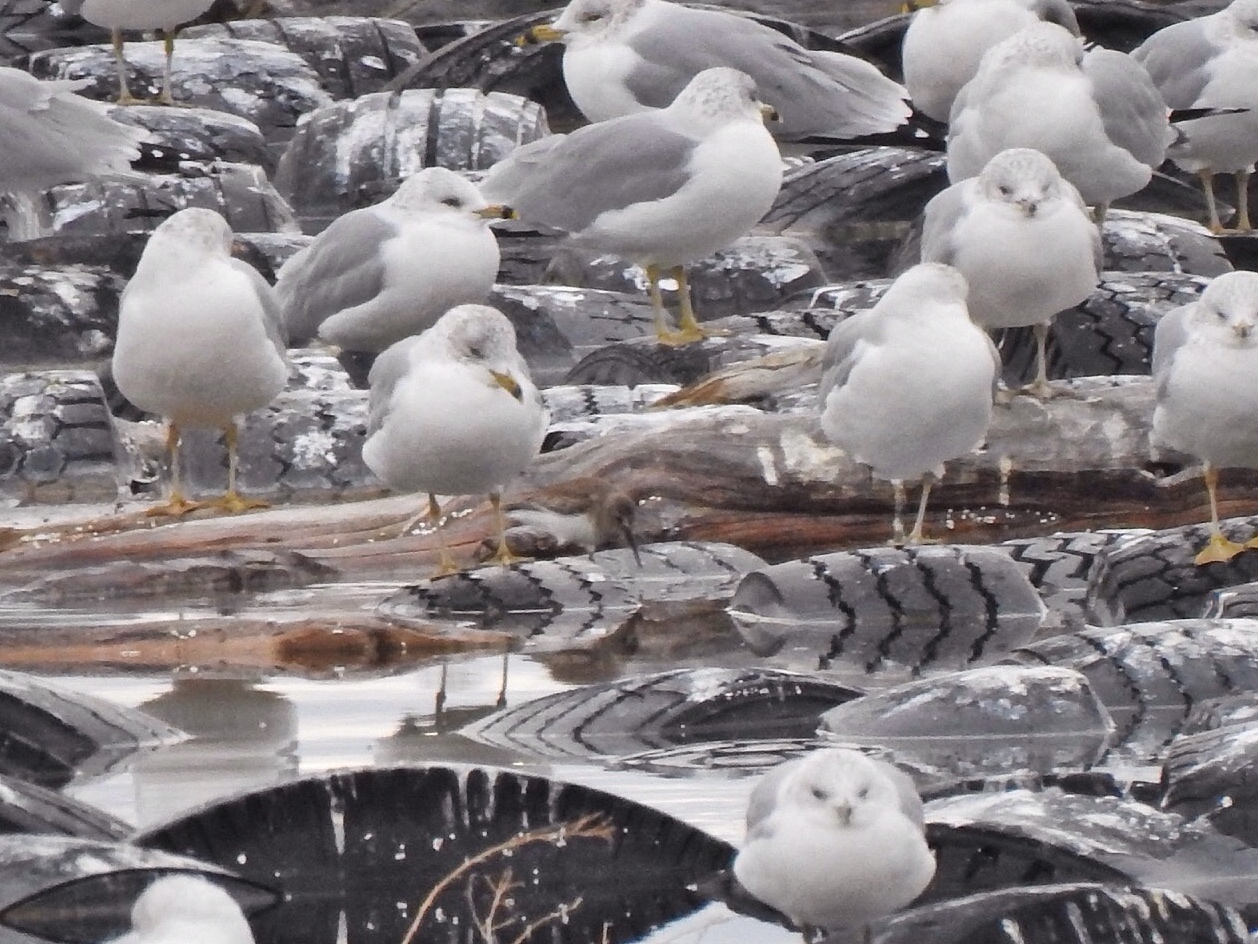 As I was sorting through the gulls, a winter-plummaged Horned Grebe swam by. 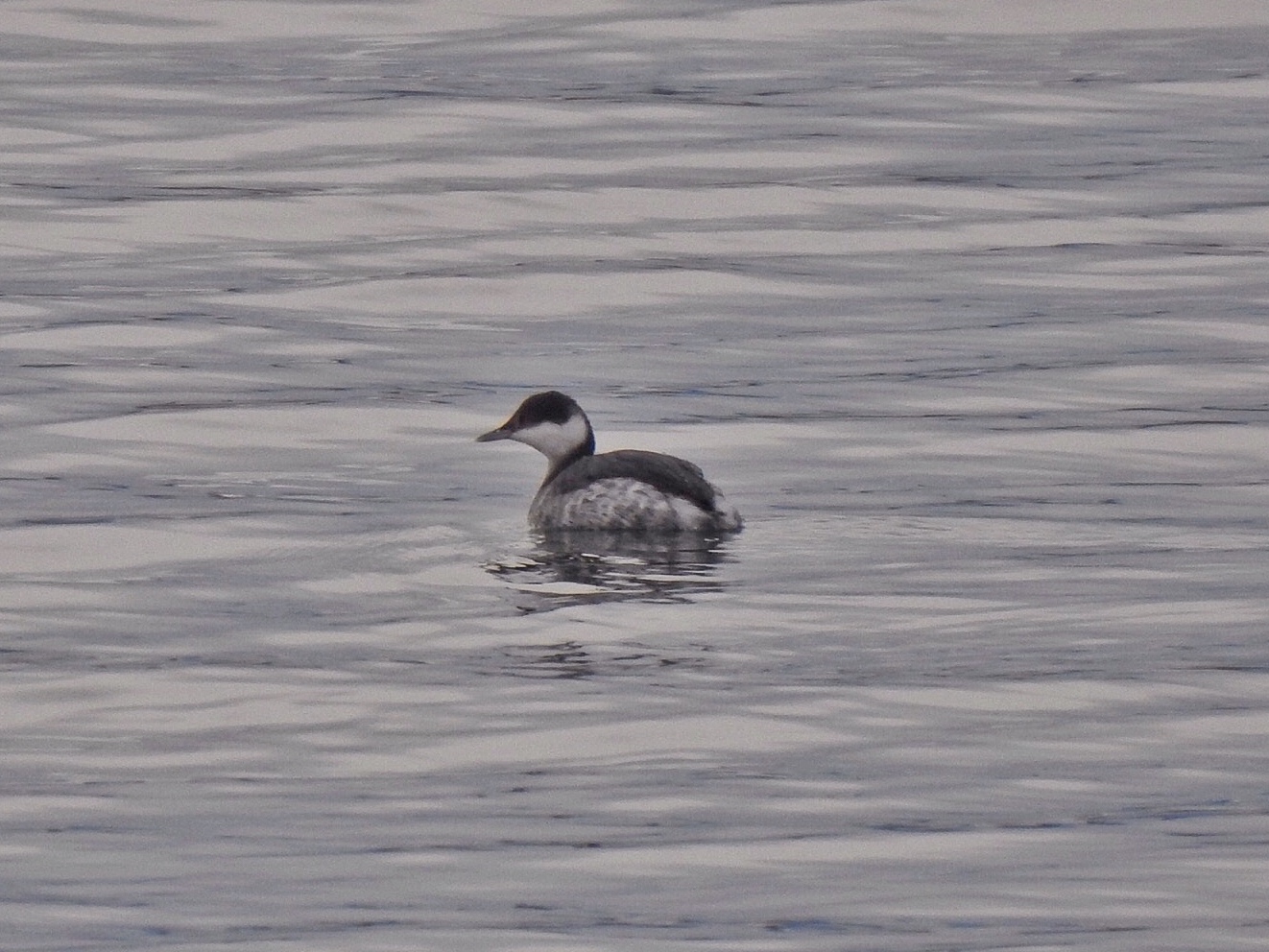 One of the first birds I spotted was a Lesser Black-backed Gull. I saw a second one a bit later on the other side of the marina—unless the first bird flew over there. I’ve included shots of both. Key marks are the dark back, the yellow legs, and the red spot on the bill. 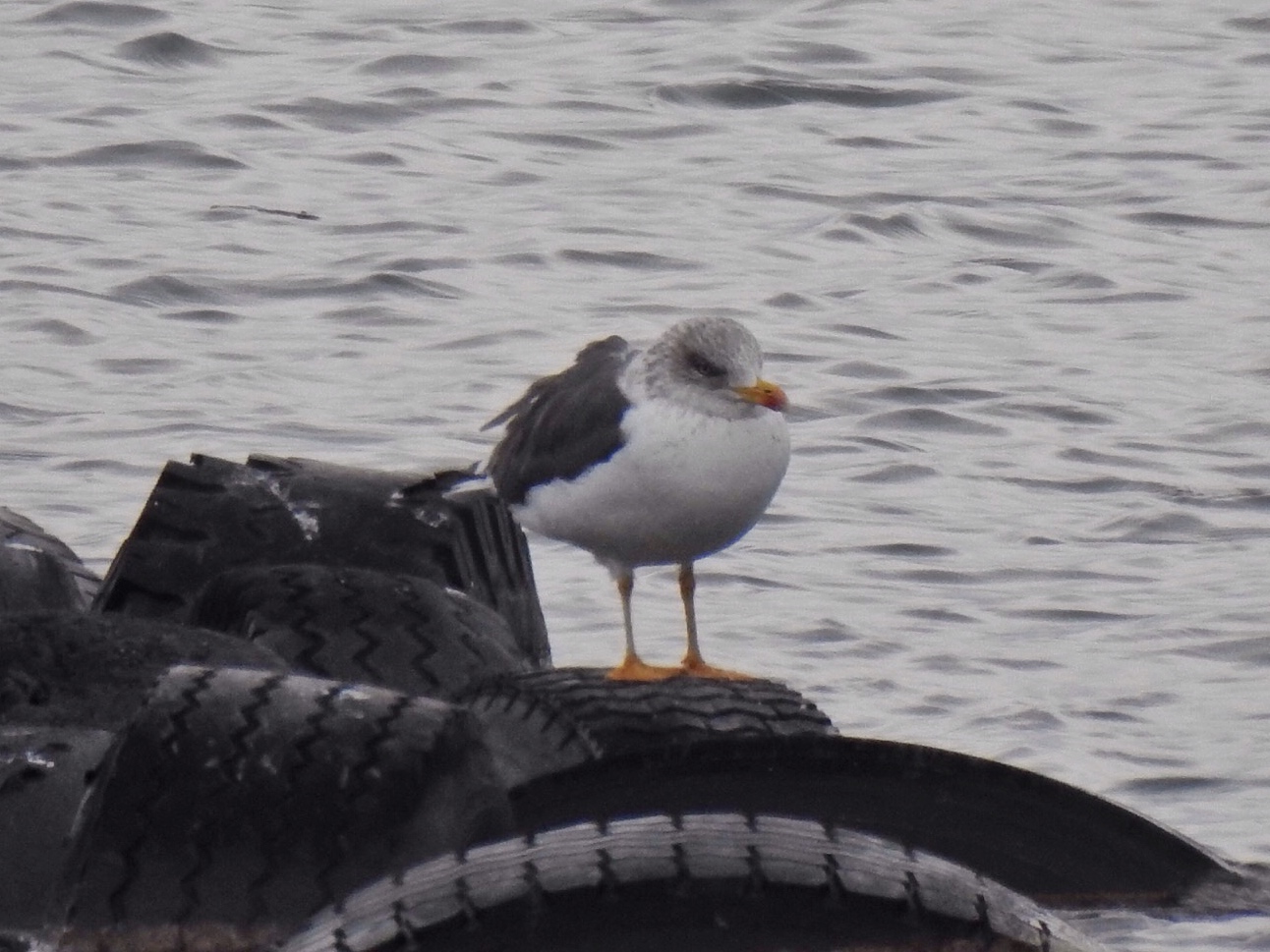 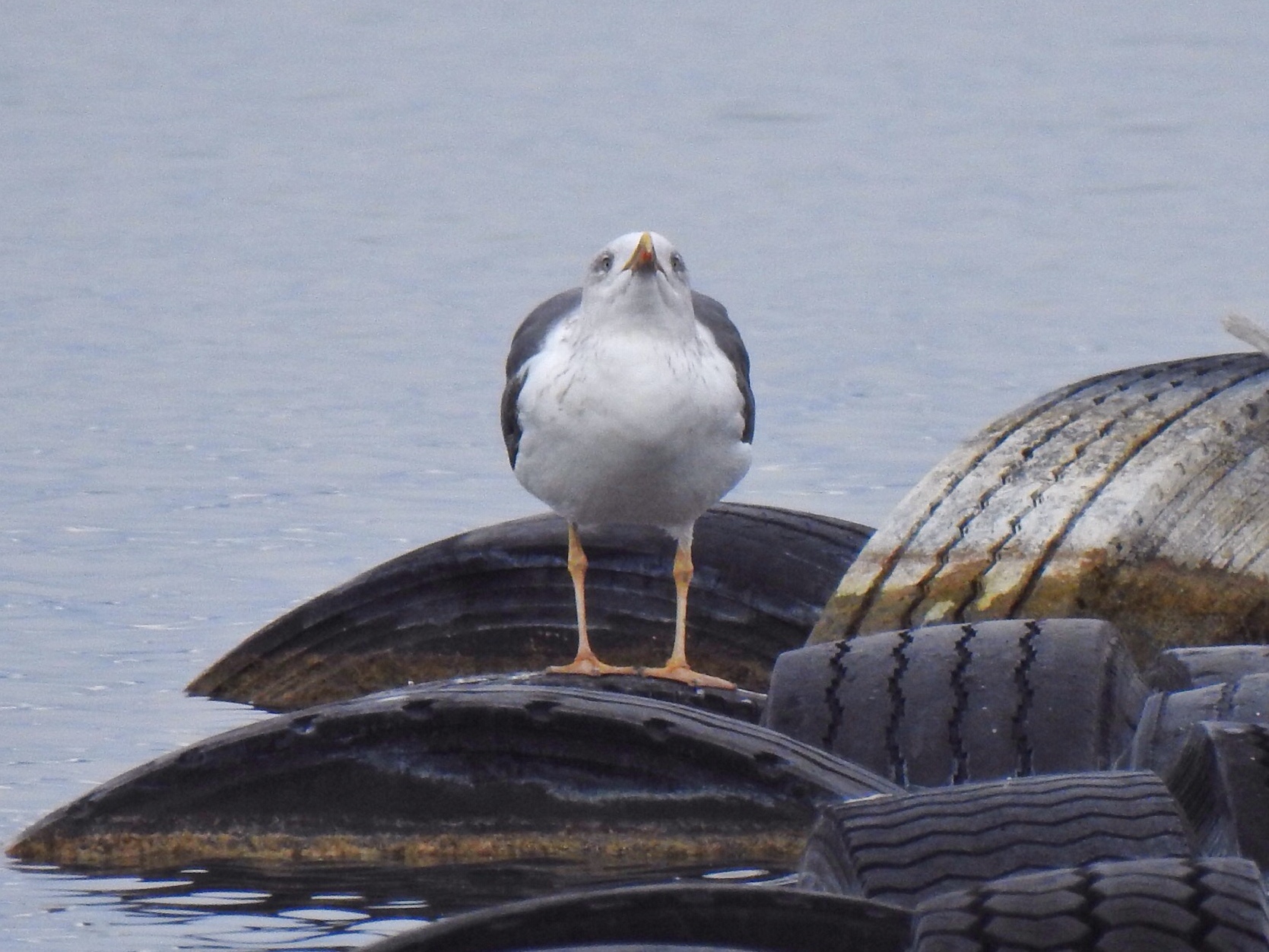 A California Gull landed on the  breakwater and looked just different enough from the Ring-bills to catch my attention. It’s a little bit bigger and longer-winged than the Ring-bills and has more black on the wing tips. It also has black and red spots on the lower mandible rather than a black ring around both. In the second photo below, it’s the one that looks like it’s wearing eye makeup. I saw my lifer California Gulls at Lake Pueblo back in 2002, about 500 yards from where I saw this one. 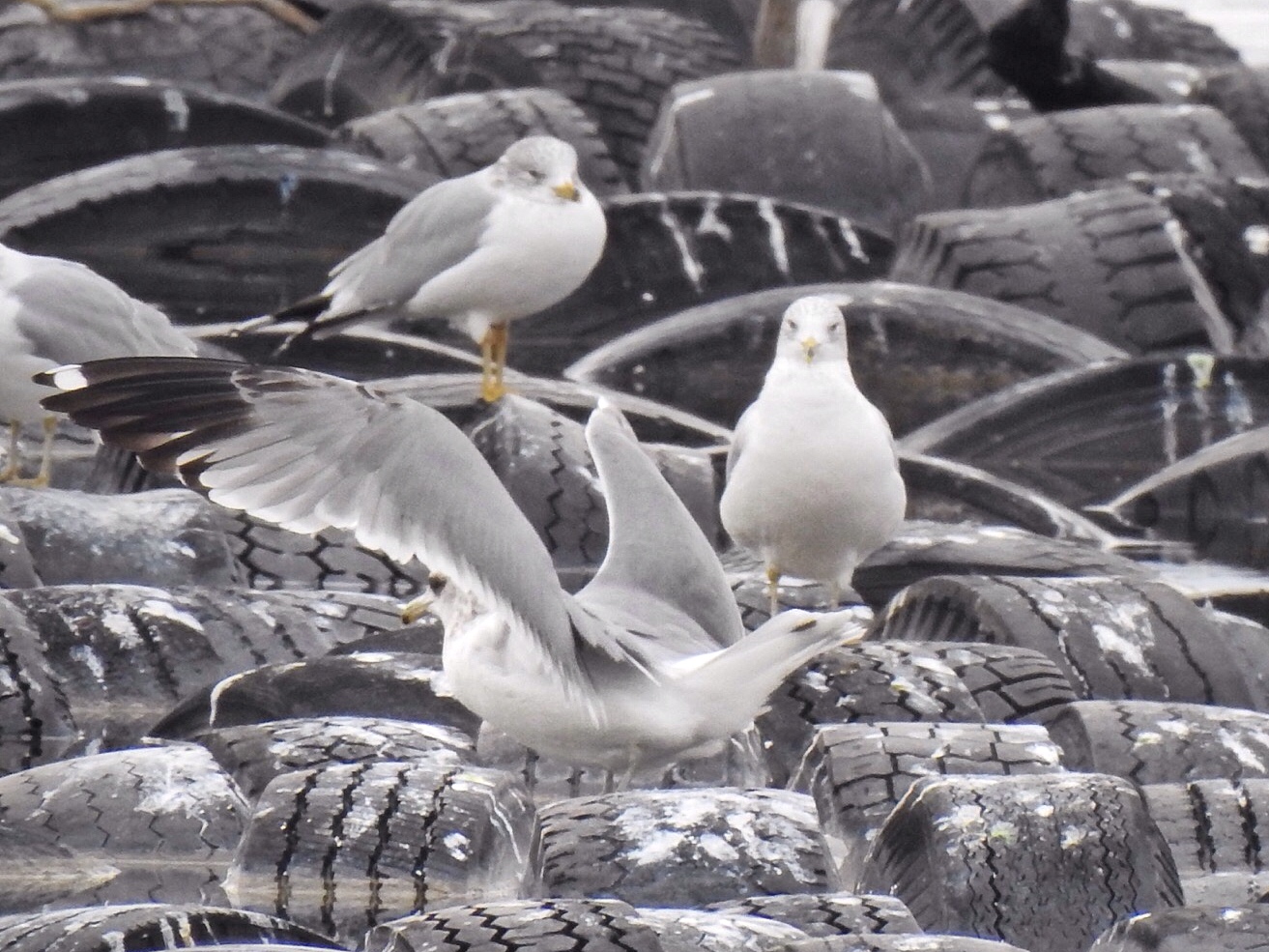 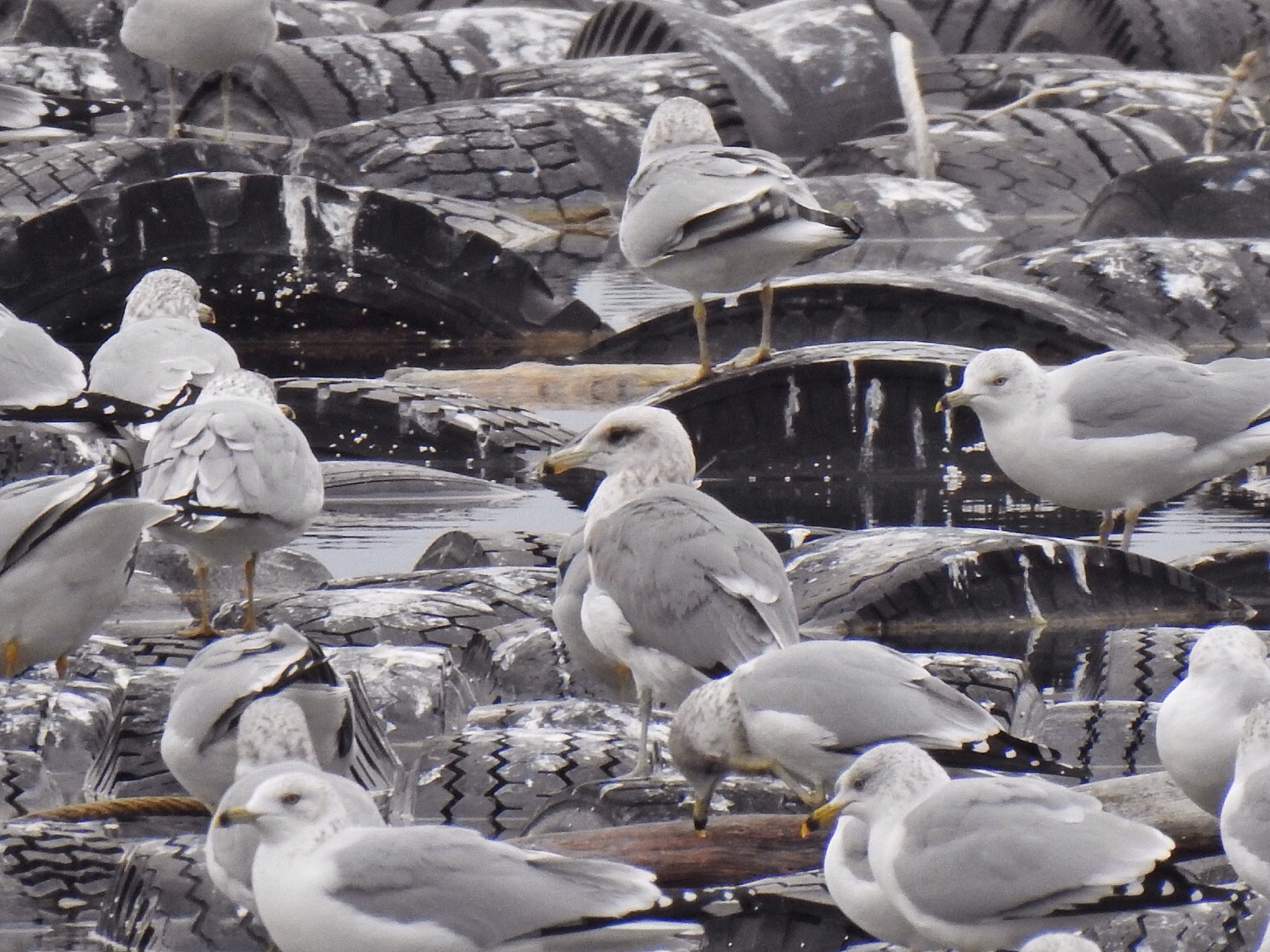 When I was done with the gulls on this breakwater, I headed around the marina to the other one. I’d gone about 10 steps when I spotted a covey of Scaled Quail running in front of me. As near as I can figure, this was within about 20 feet of where I saw my lifer Scaled Quails back in 2002. I’ve been other times in between—they hadn’t been there all along.

The quail were very skittish, but I stalked them and waited them out and got some shots. They finally flew across a small channel. I saw them three or four times on the other side, usually as they dashed from one bit of cover to another. 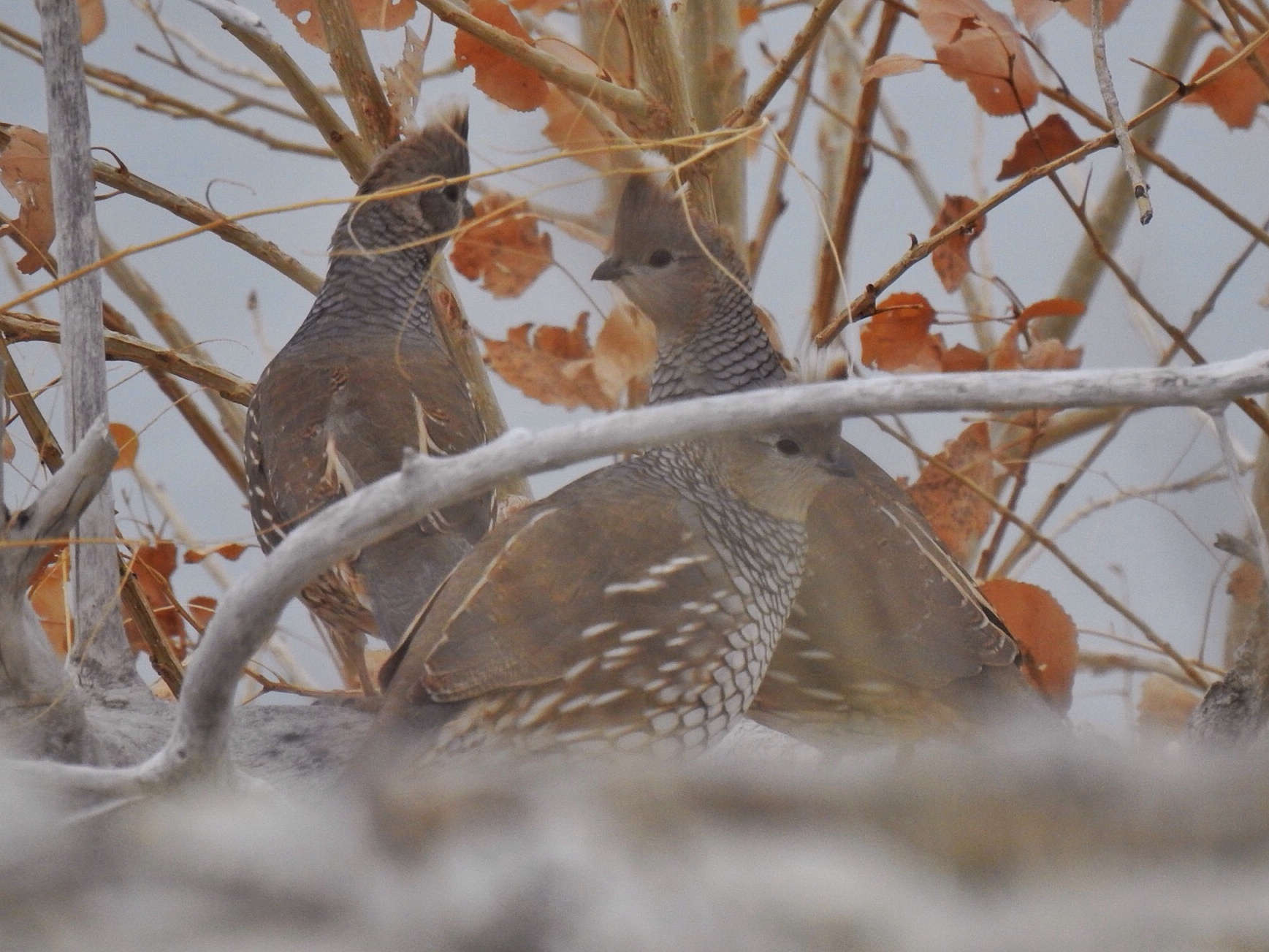 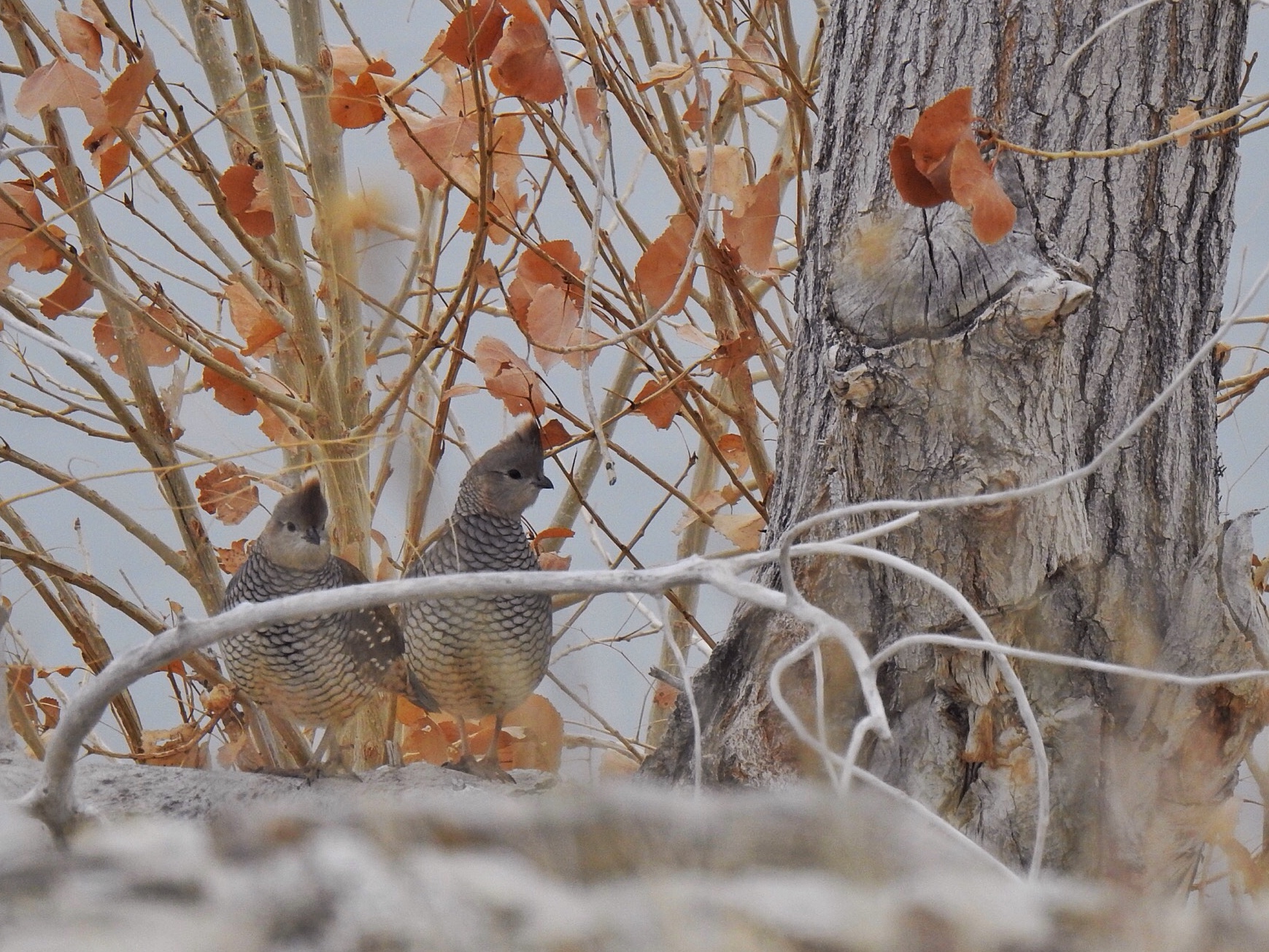 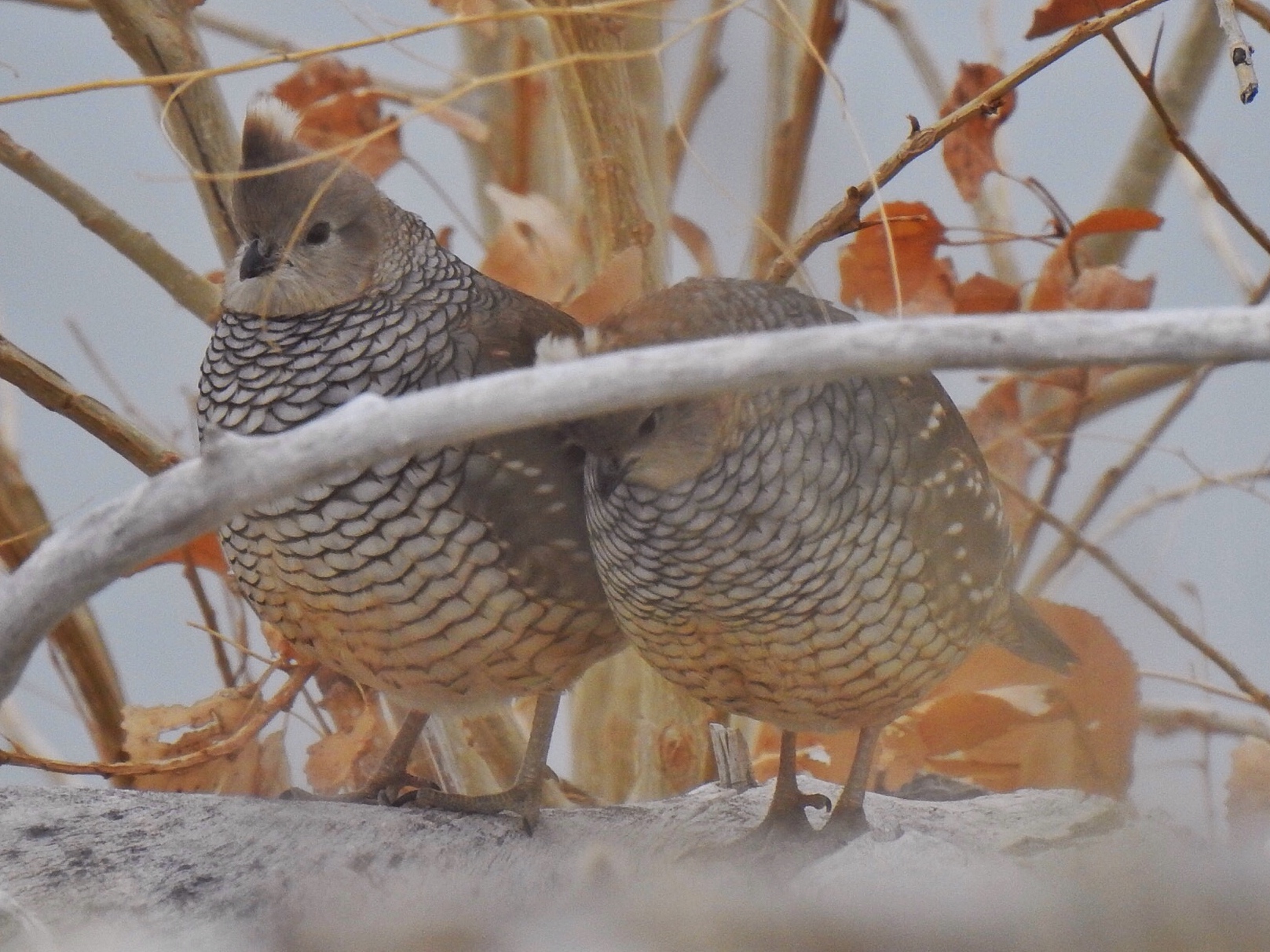 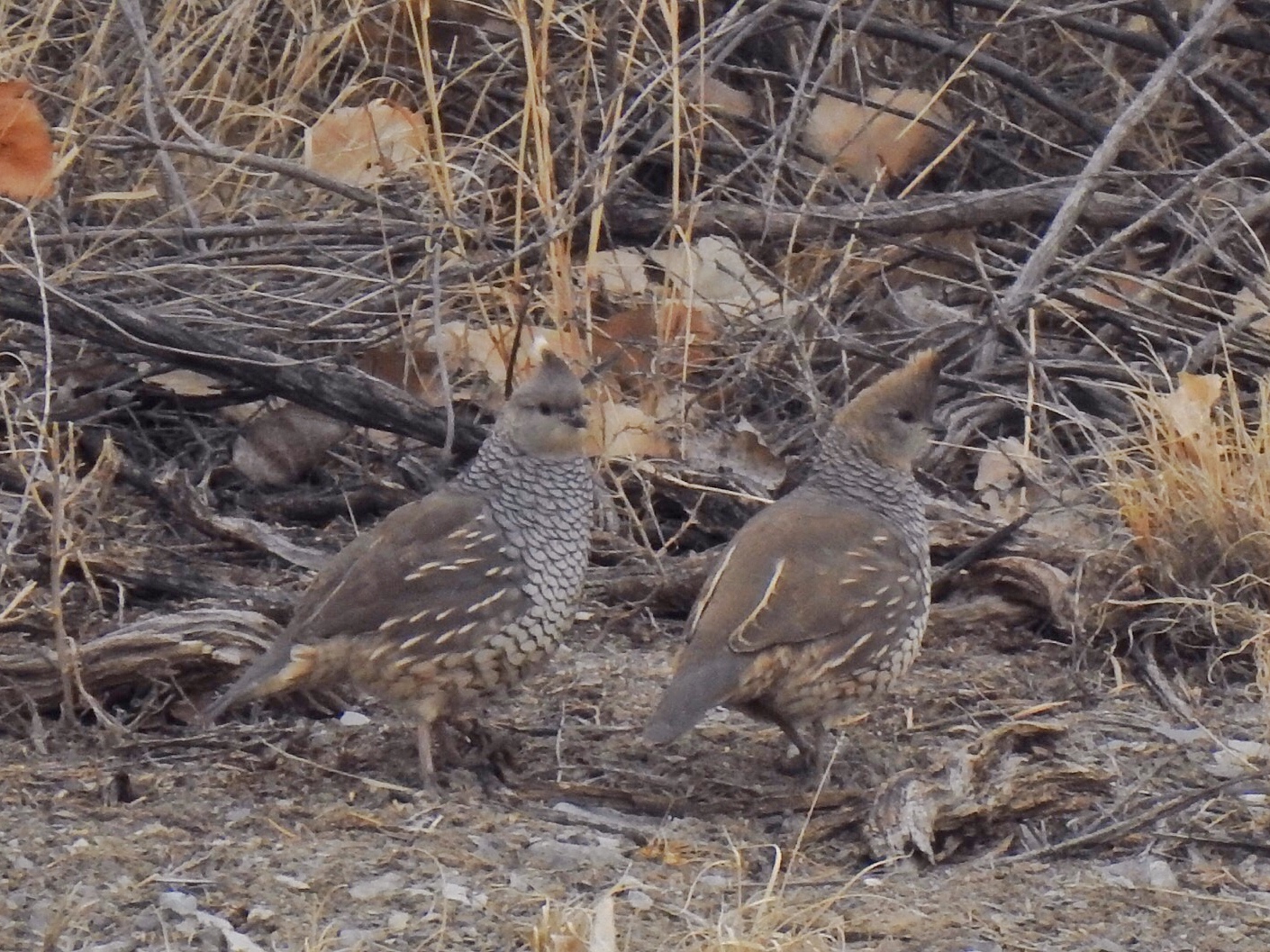 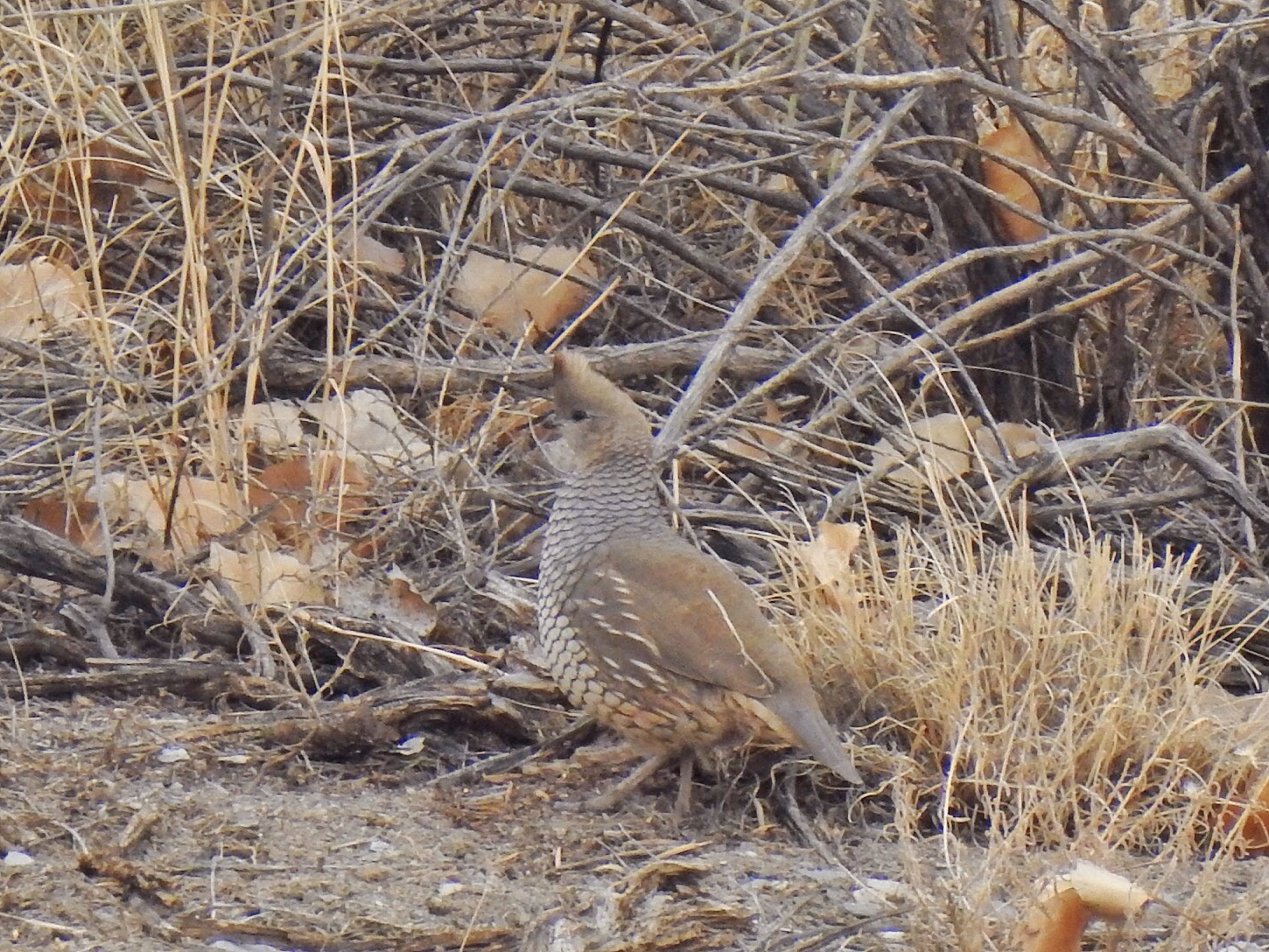 The other breakwater was filled with more Ring-billed Gulls. I can’t even begin to guess how many were around on this day. I came upon several more large flocks below the dam. 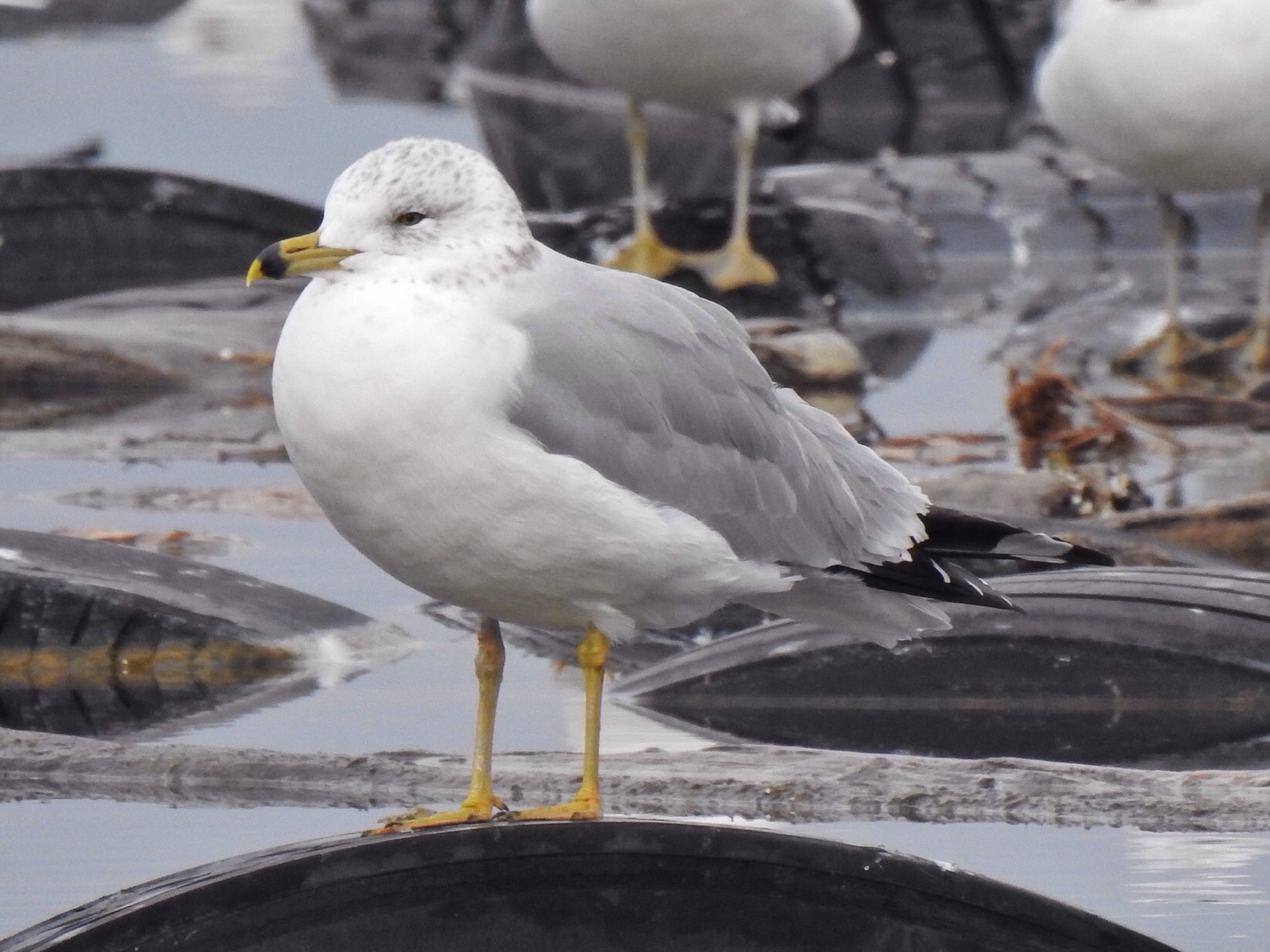 And a Great Black-backed Gull. No need to explain the field marks on this one. This is a very rare bird in Colorado—or it would be if this very bird hadn’t wintered at this very spot for the past 20 years, or so I’m told. I know I’ve seen it every year since we’ve lived in the state. 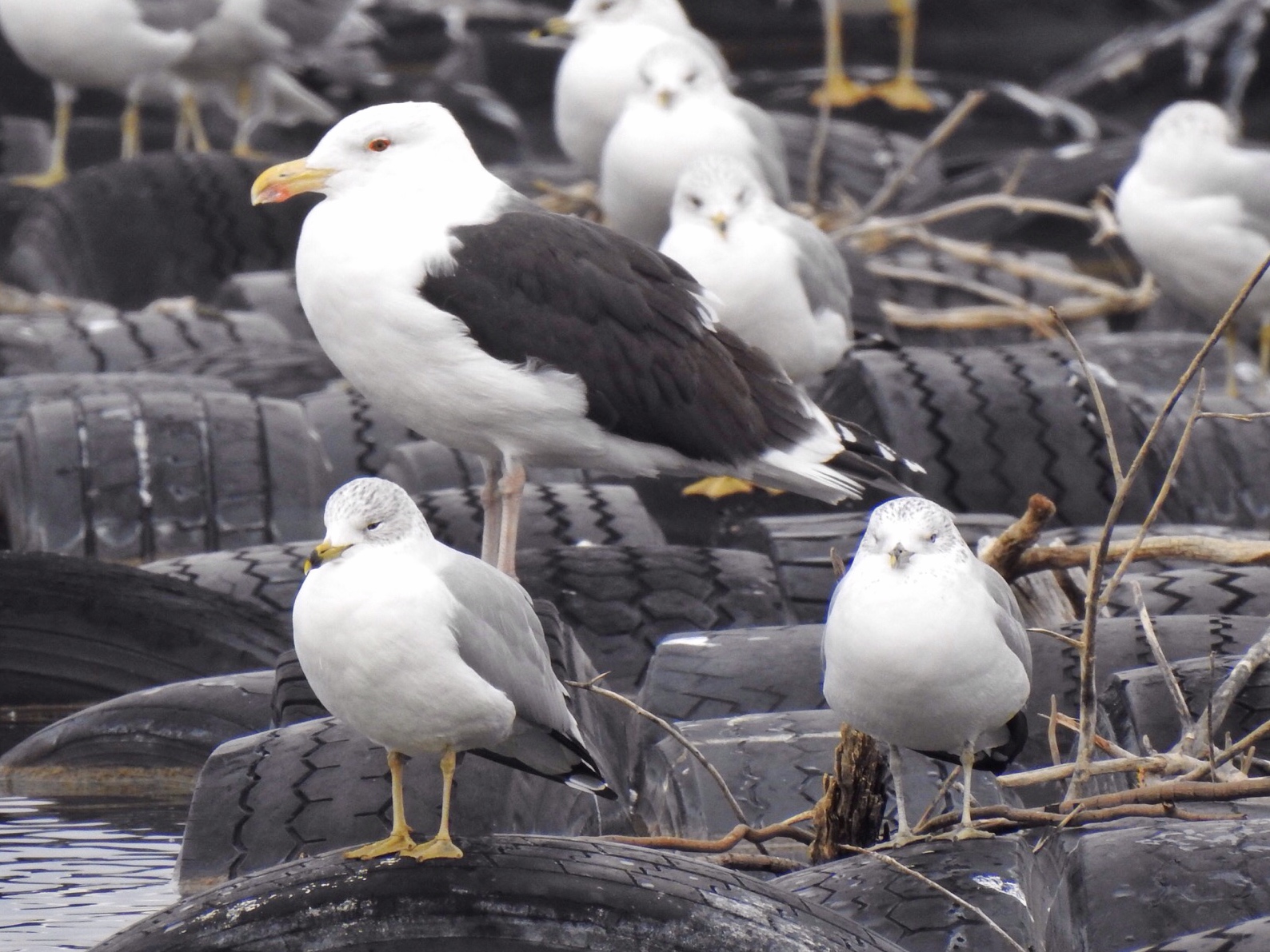 That was as much gull-viewing as I wanted to do for the day, and a lot more than I usually do. I parked below the dam and almost immediately saw an adult Cooper’s Hawk. 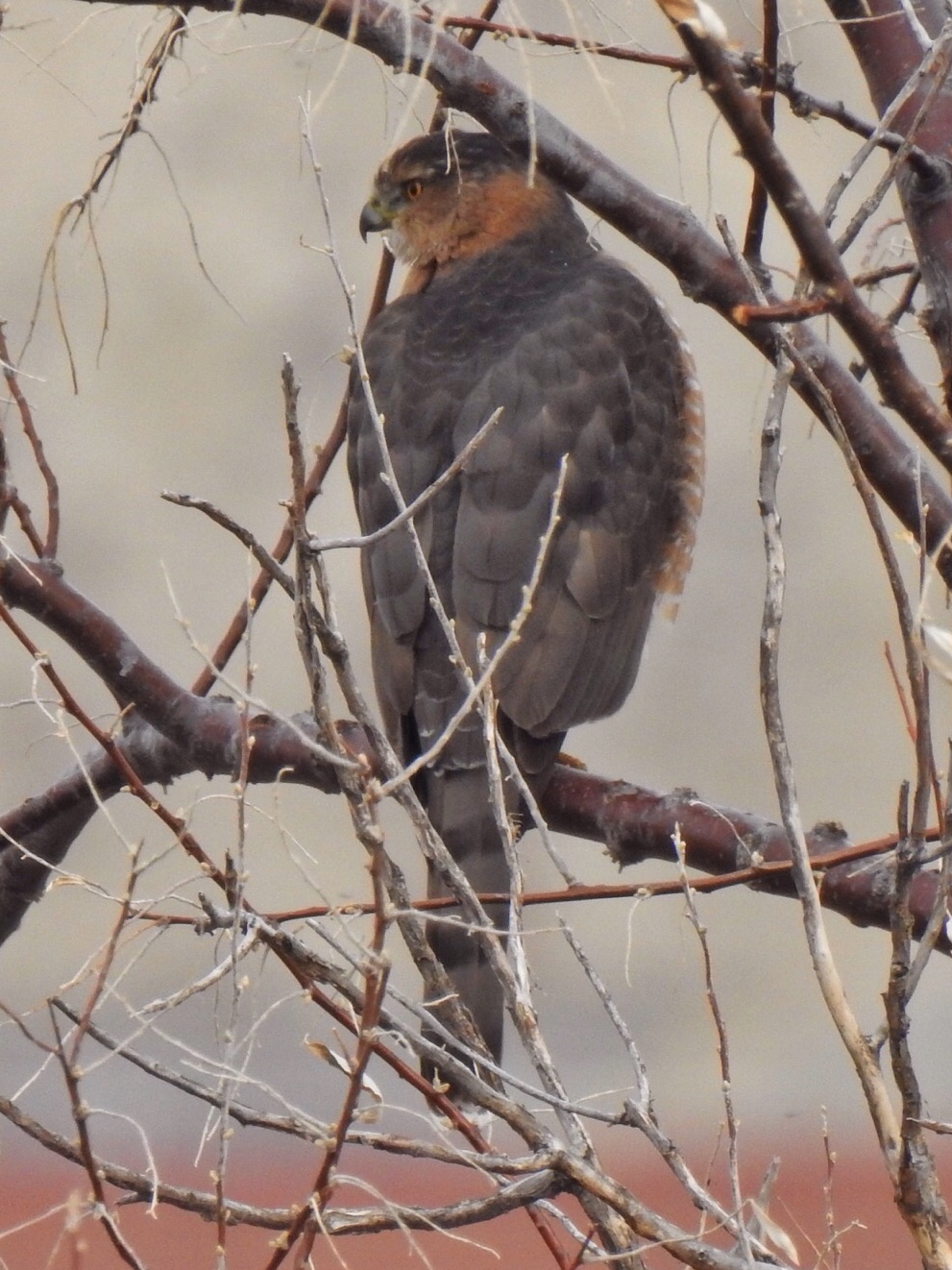 It let me walk around the tree and get an unobstructed shot of its front, but of course that made it silhouetted by the sun, which was breaking through the overcast. I lightened the photo as much as I could. 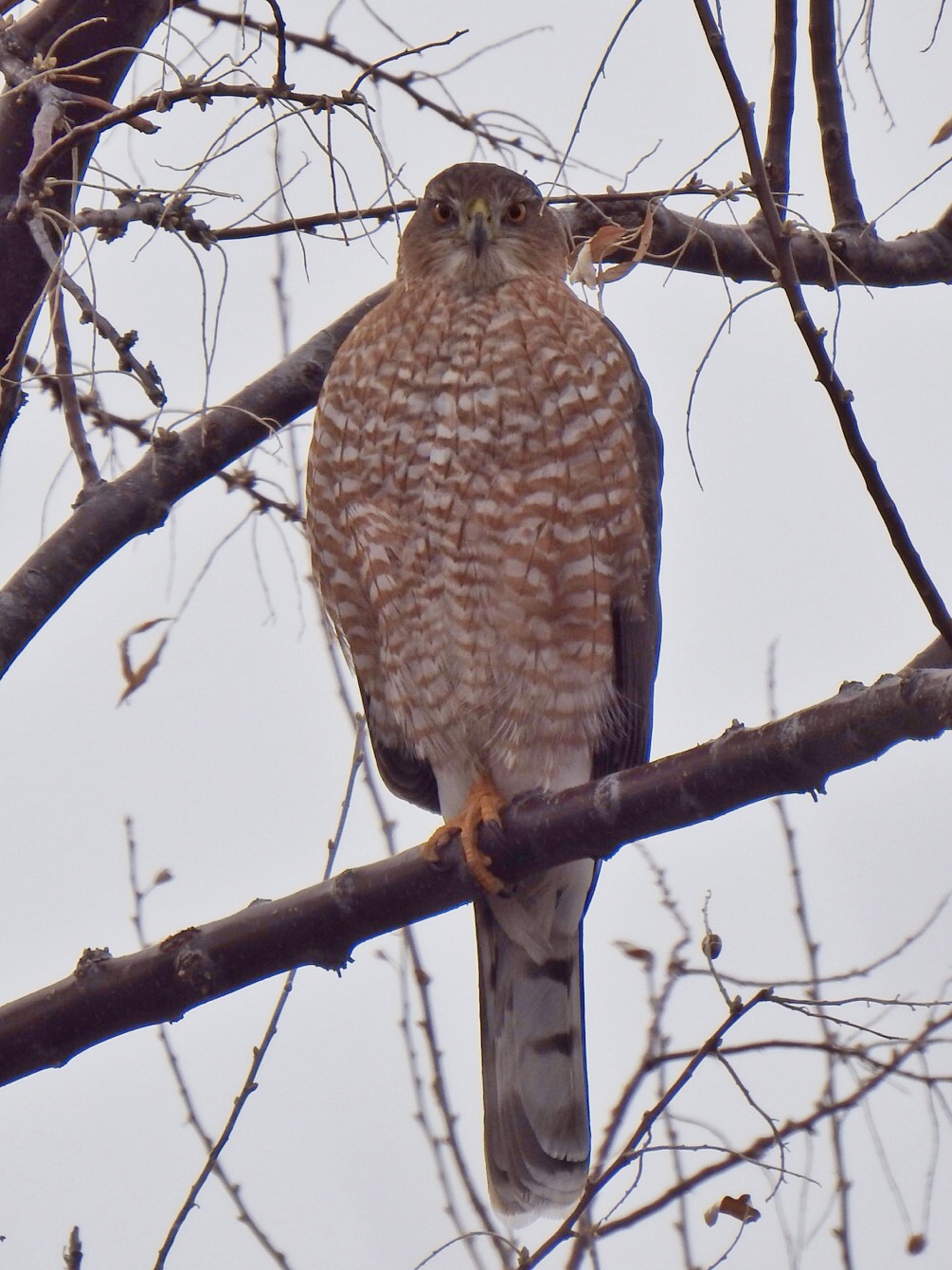 It obviously knew I was there, but it didn’t move. Several minutes later I saw it flying east over the river.

I decided to walk a couple miles down one side of the Arkansas River and up the other. I hadn’t gone far before I decided to return to the car to shed some layers. The highlight of the day was a female Merlin (Taiga subspecies) that flew down to the rocks along the river. It stood there for maybe four minutes before flying up to the top of a dead tree across the river. About 10 minutes later, I saw it circling overhead. I made a half-hearted attempt to take a picture of it in flight, but before I could even get my camera out and ready, it was so high up it was just a speck. 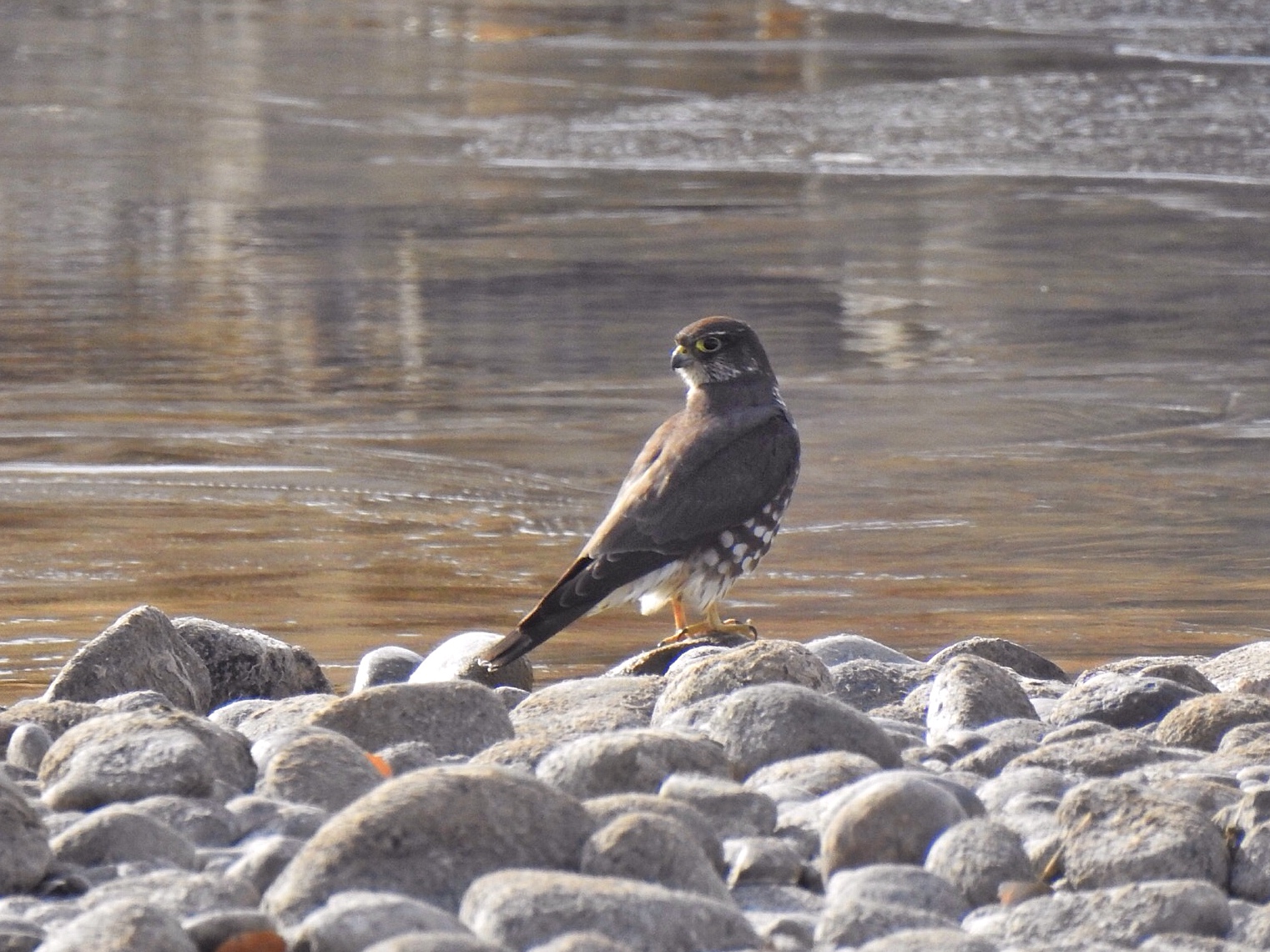 A Say’s Phoebe. We’ve had one nest on our front porch the last two summers, but I’ve never gotten a good photo. 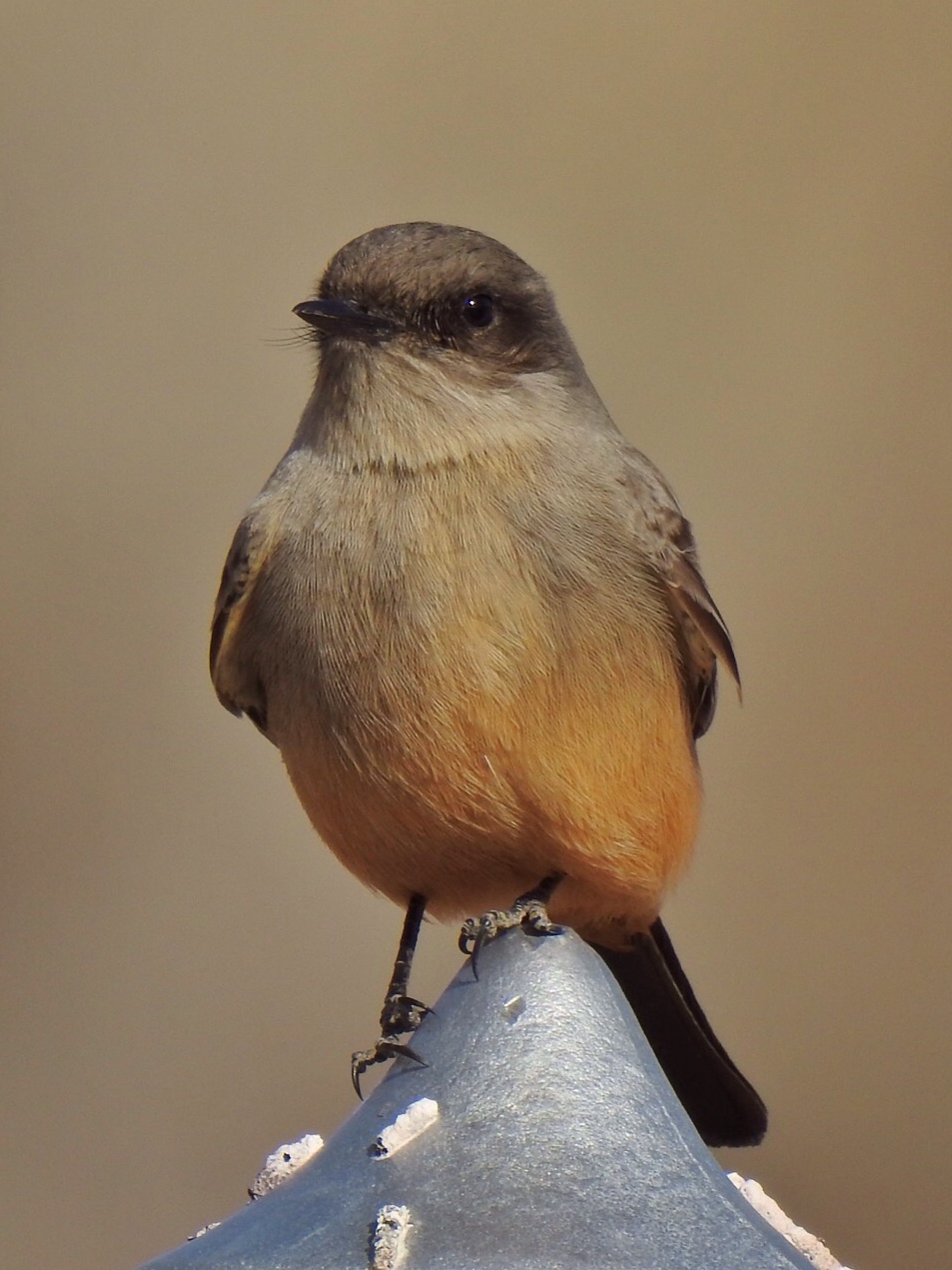 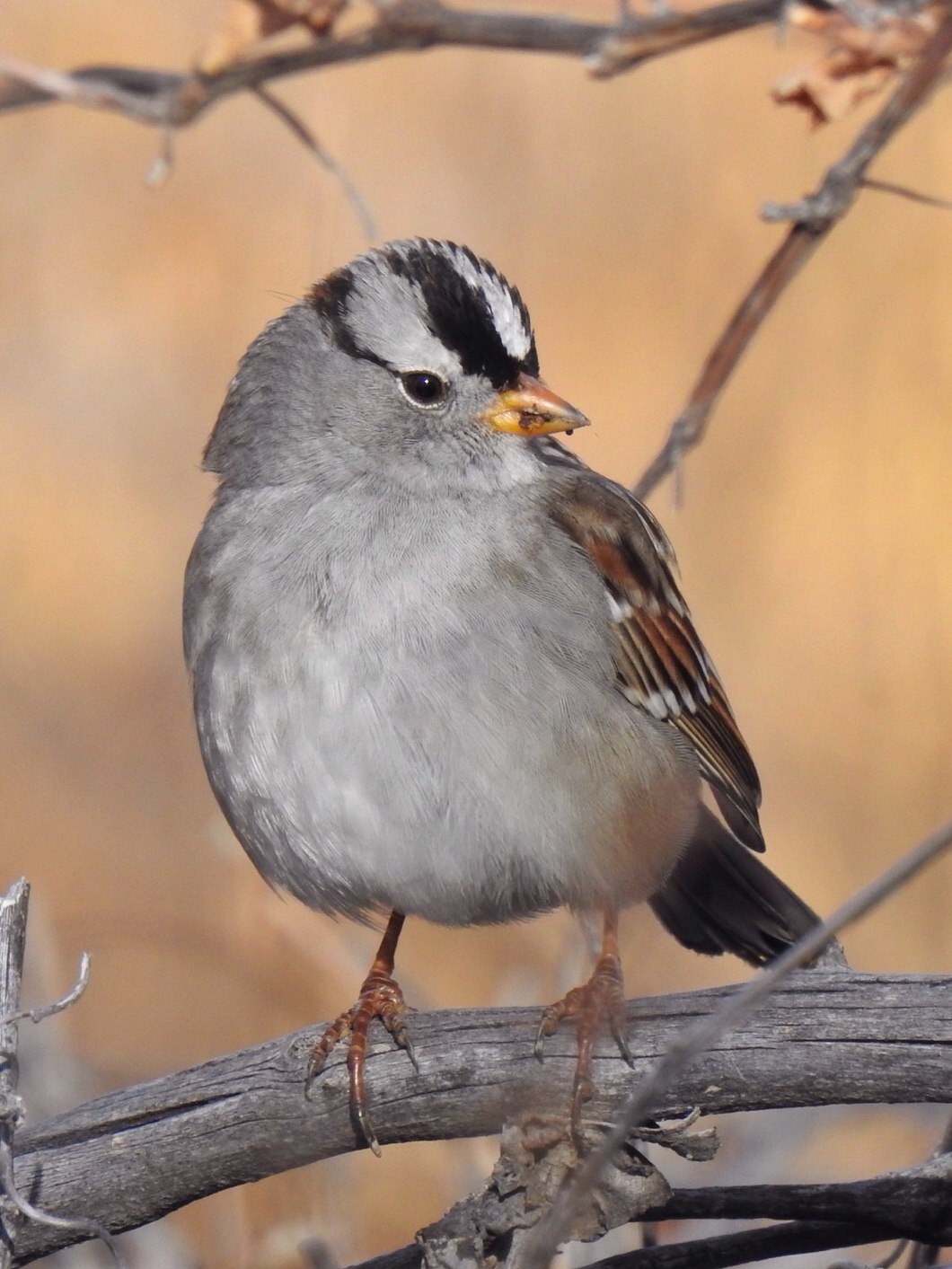 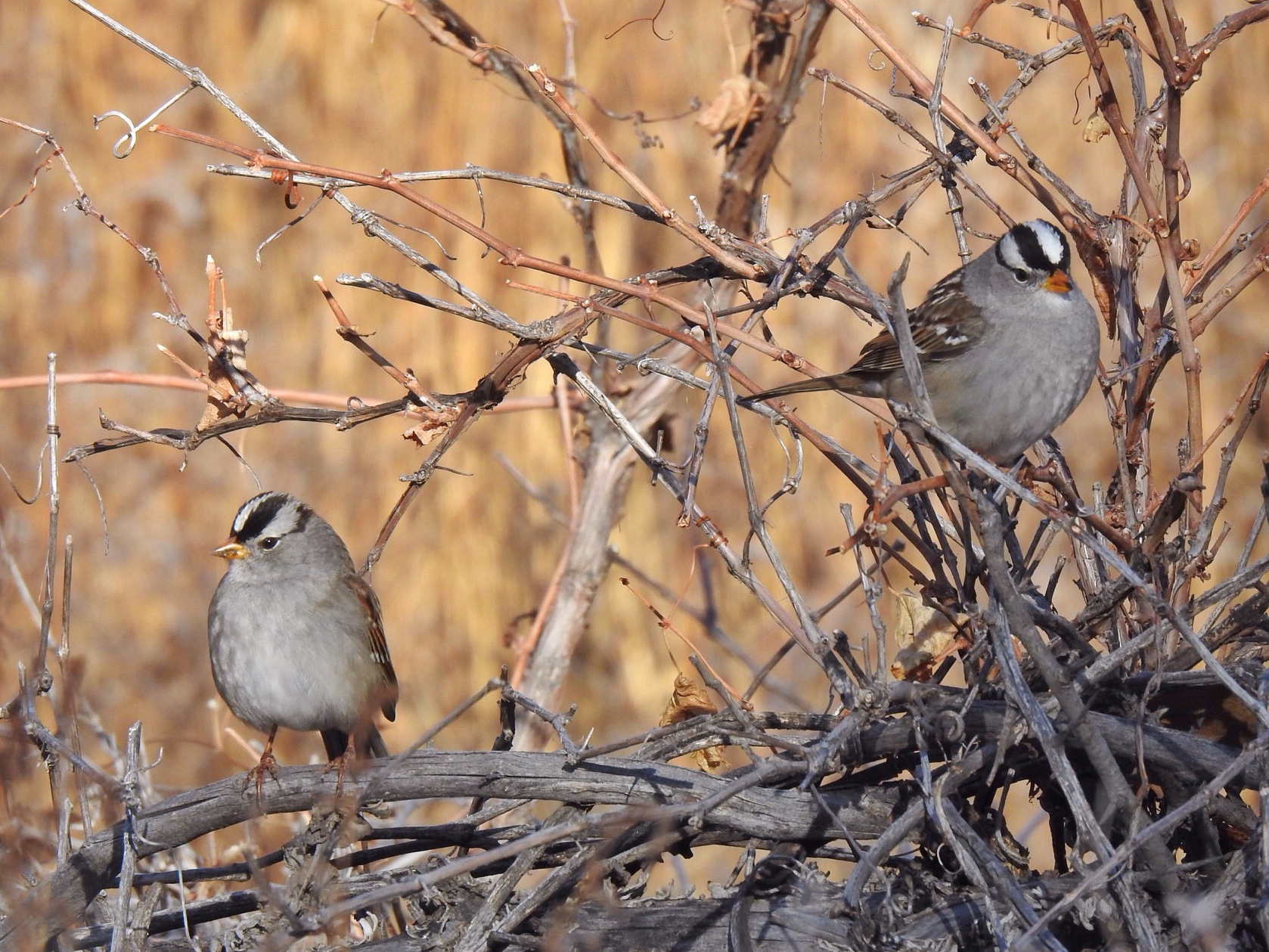 A Dark-eyed Junco (Oregon subspecies). Not a great photo, but the best I’ve gotten so far of this type. 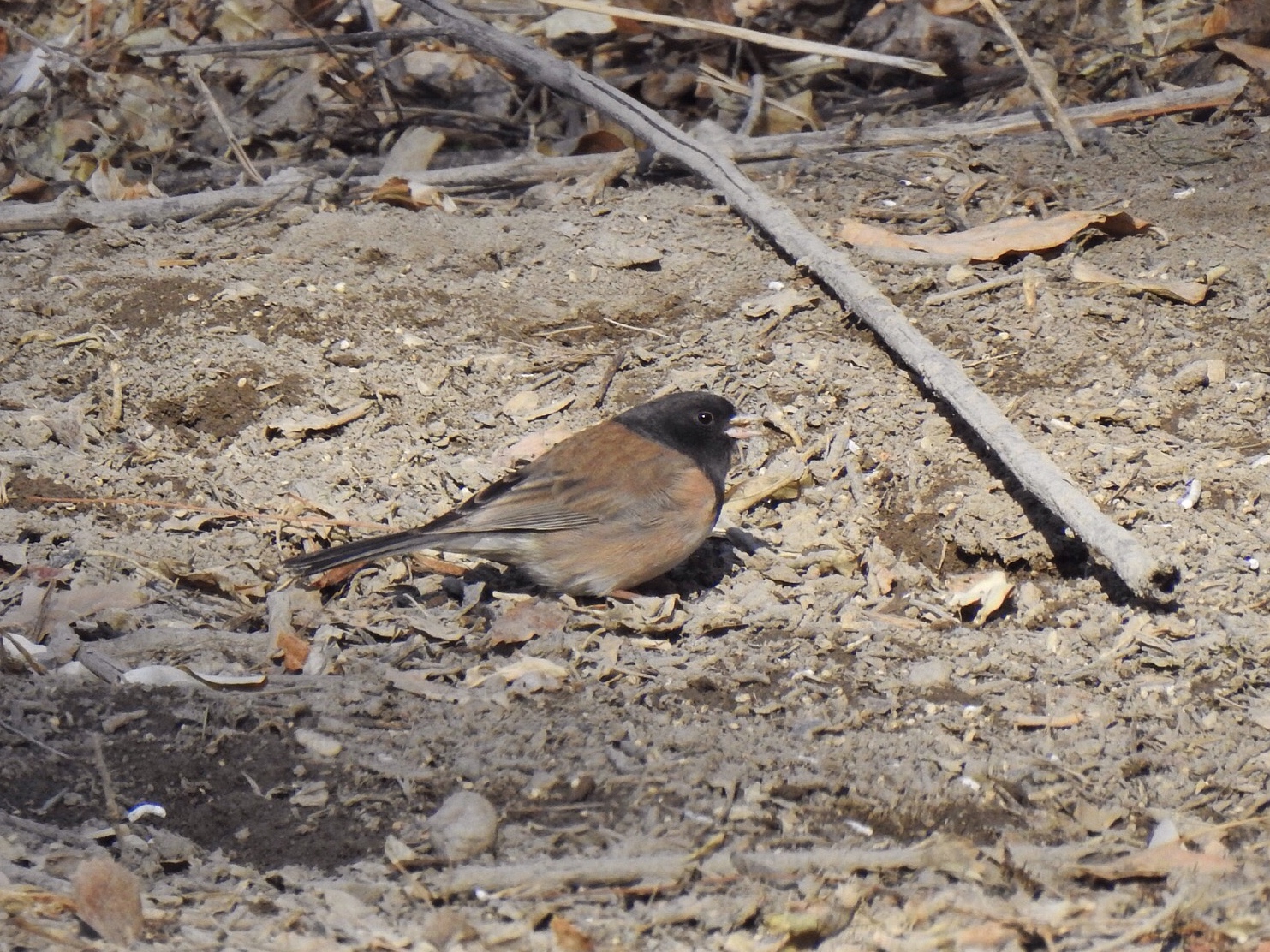 A juvenile Double-crested Cormorant hanging out by itself on a snag in the big pond north of the river. 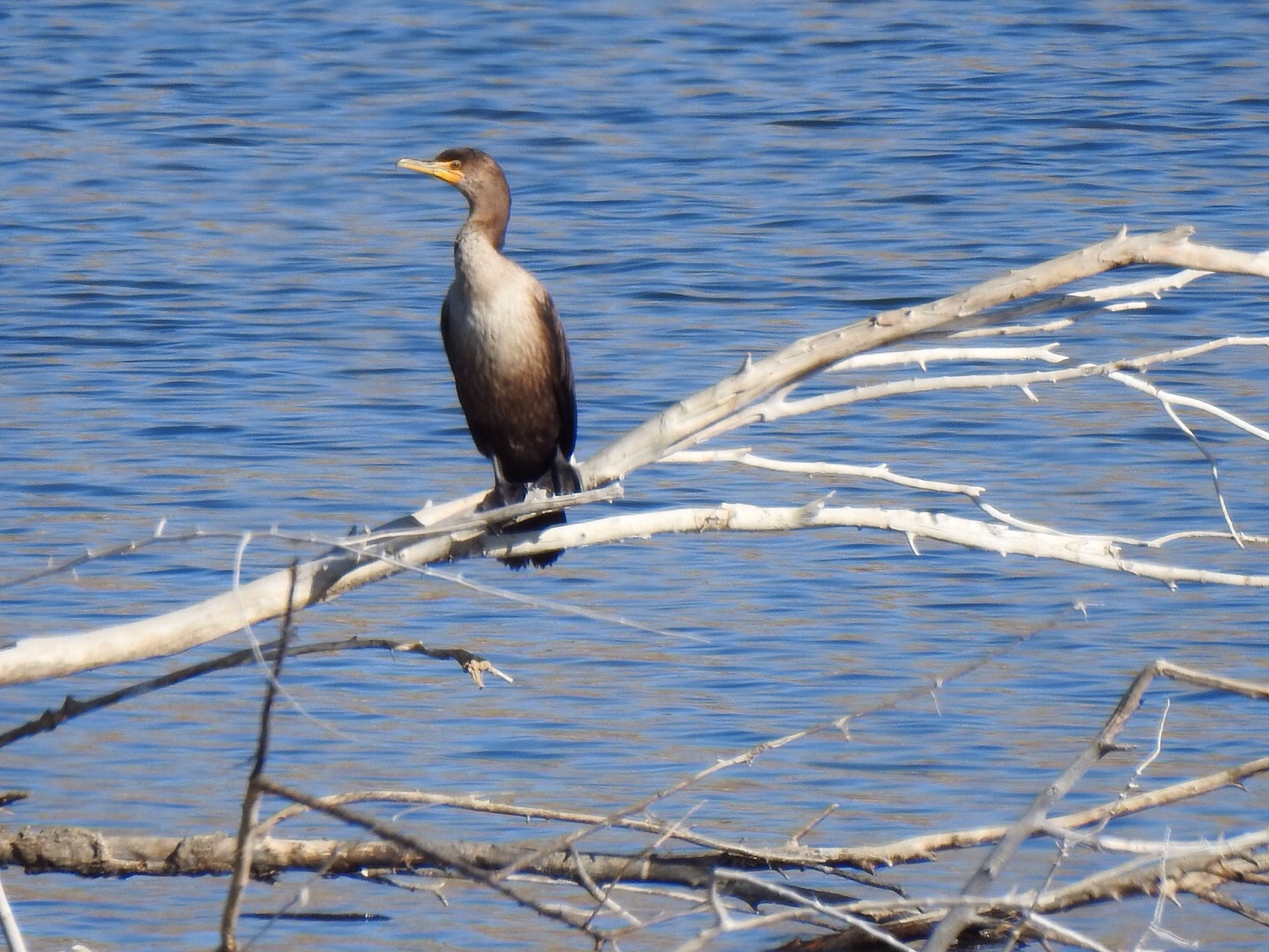 Your basic Rock Doves (pigeons), but I like the way the light brings out the iridescence. 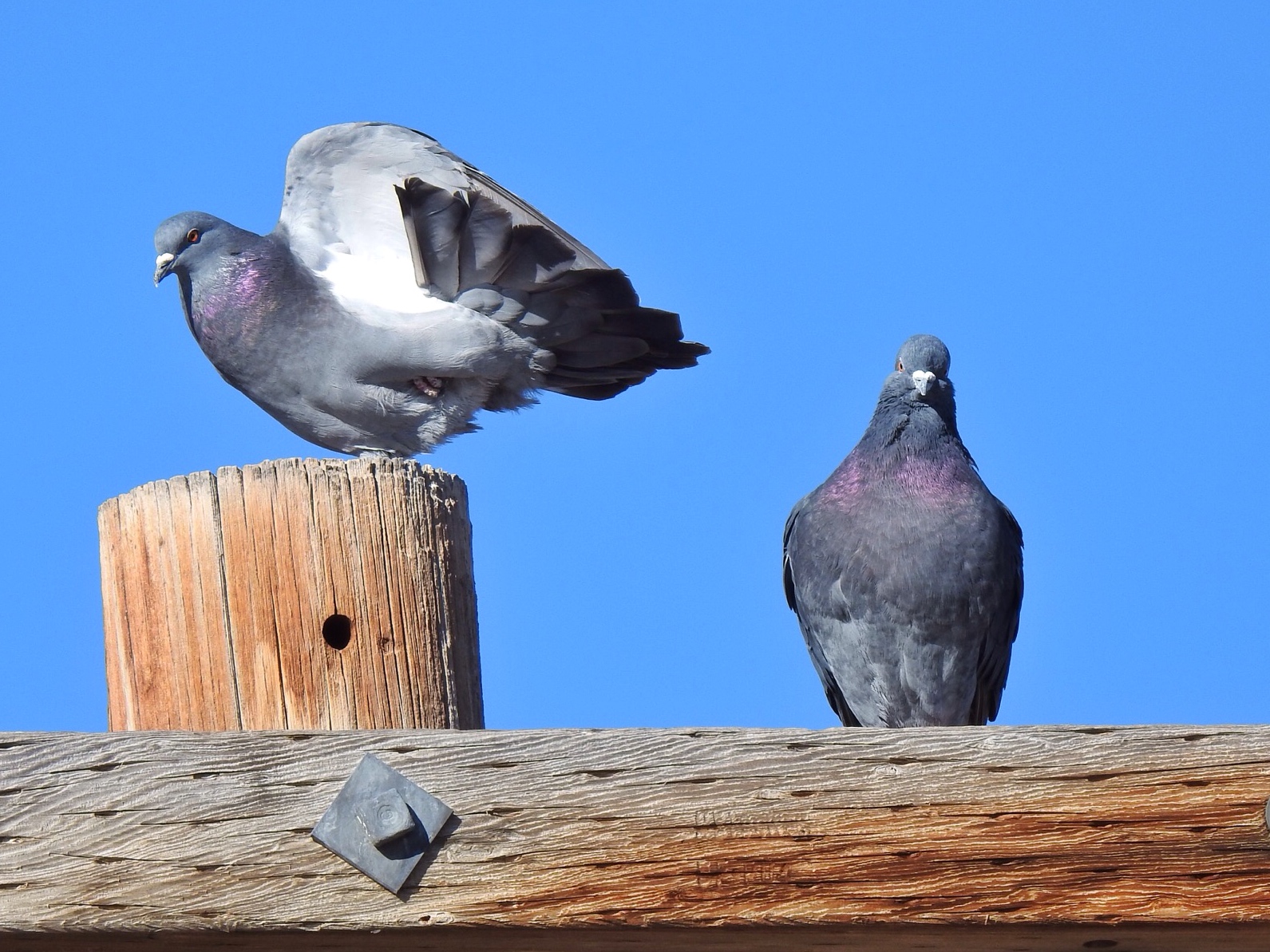 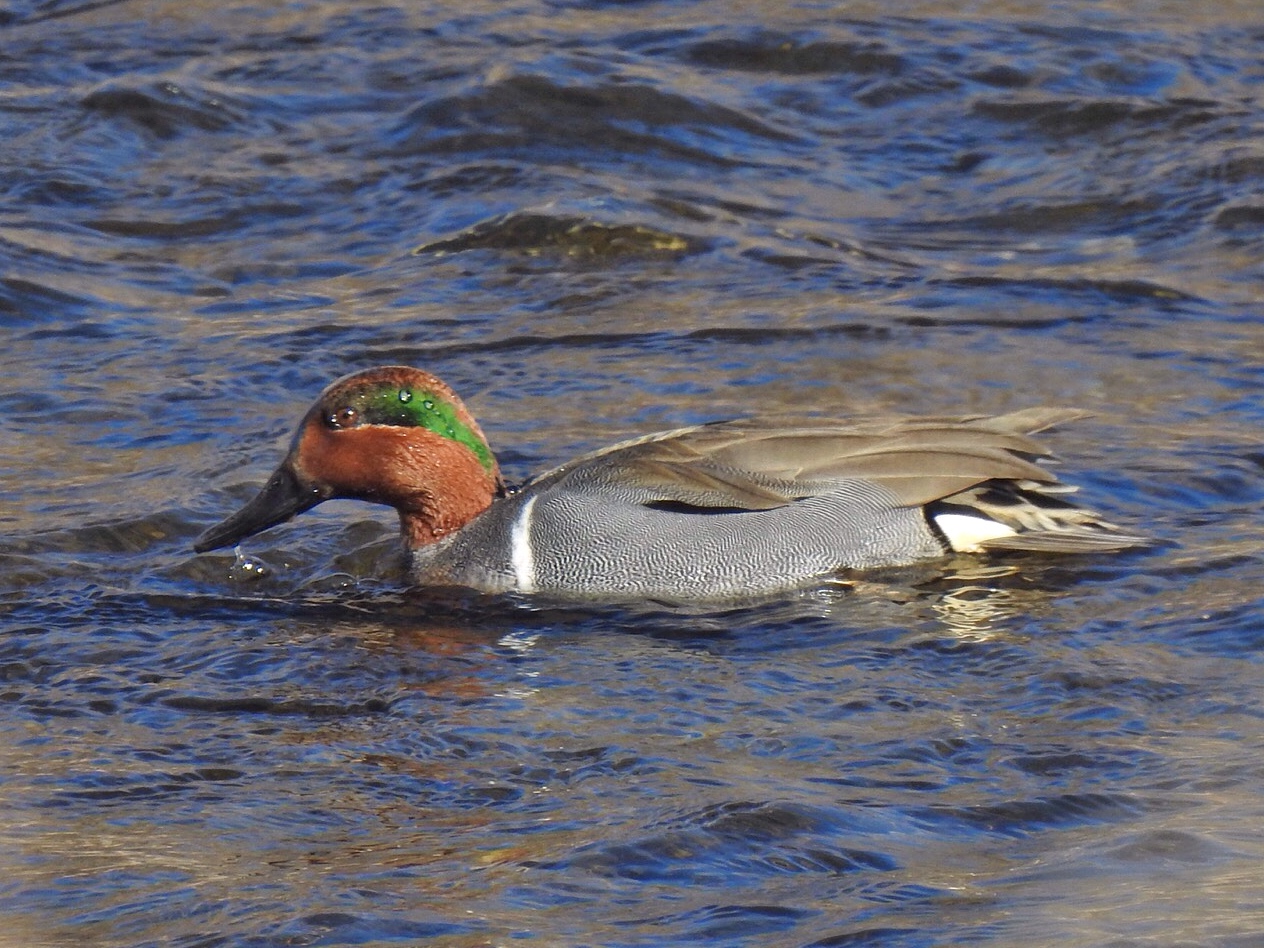 A Bushtit. I saw two flocks of these, both of at least 10 birds, and I was in perfect position to photograph them, but they move so fast I hardly had time to point the camera, much less focus and shoot. I did manage to capture this one. Based on the black ear-patch, it’s probably a juvenile male. 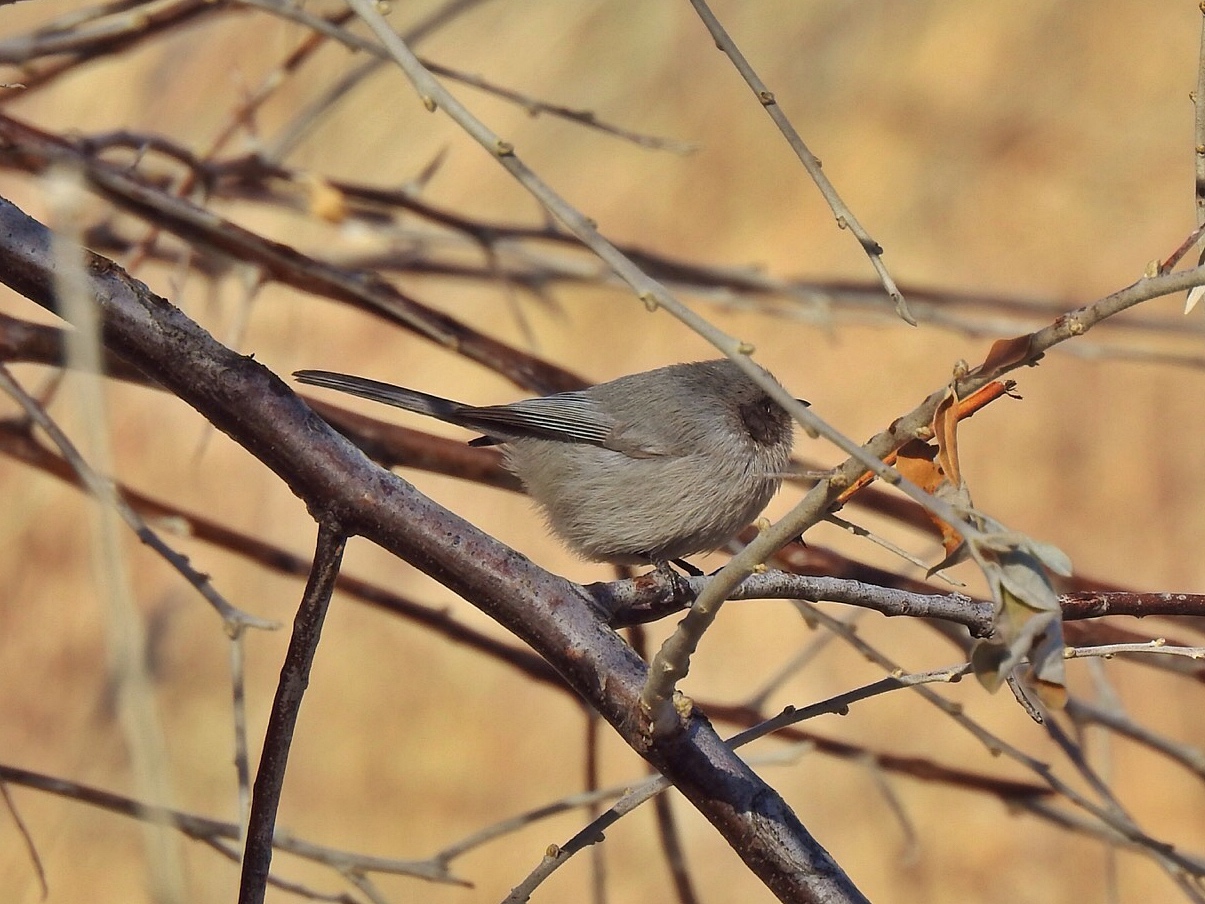 Getting a good shot of a Bushtit is on my bucket list.

I drove out into the flats on Hanover Road to look for raptors, but I saw bupkis except a couple Canyon Towhees in the cholla. I was home by 4:20 with 46 birds on my day list and 58 on my year list. And that doesn’t count the pair of Great Horned Owls that are calling outside my house as I write this because I haven’t managed to see them.