I rafted through the Royal Gorge back in 2002. I saw the suspension bridge high overhead and the crowds of people lining the train tracks along the bottom of the gorge. But it wasn’t until Easter weekend that we made the hour drive to visit.

It cost us $23 to get in. I found out from the ticket lady that the incline railway down to the river was shut down. There had been a fire in 2013 that wiped out everything in the park except the bridge itself. They’re slowly rebuilding, but the incline isn’t expected to be up and running for another five years or so. I’m guessing they haven’t lowered the price any.

We had beaten the crowds, so we headed right for the aerial gondolas. We crowded into a car with a friendly family of six from Virginia. The ride only took about eight minutes, but it offered impressive views of the gorge, the bridge, and the surrounding landscape. 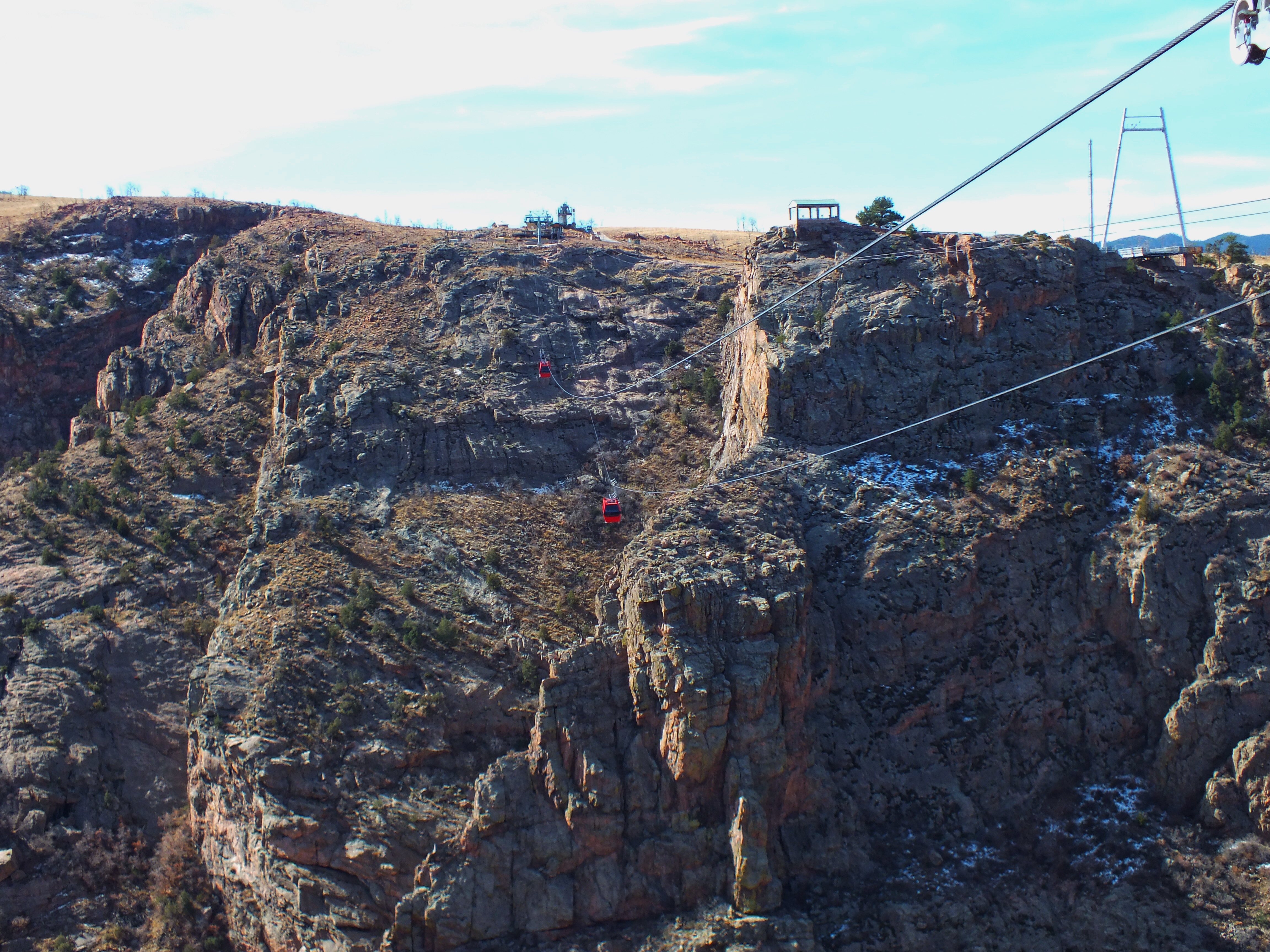 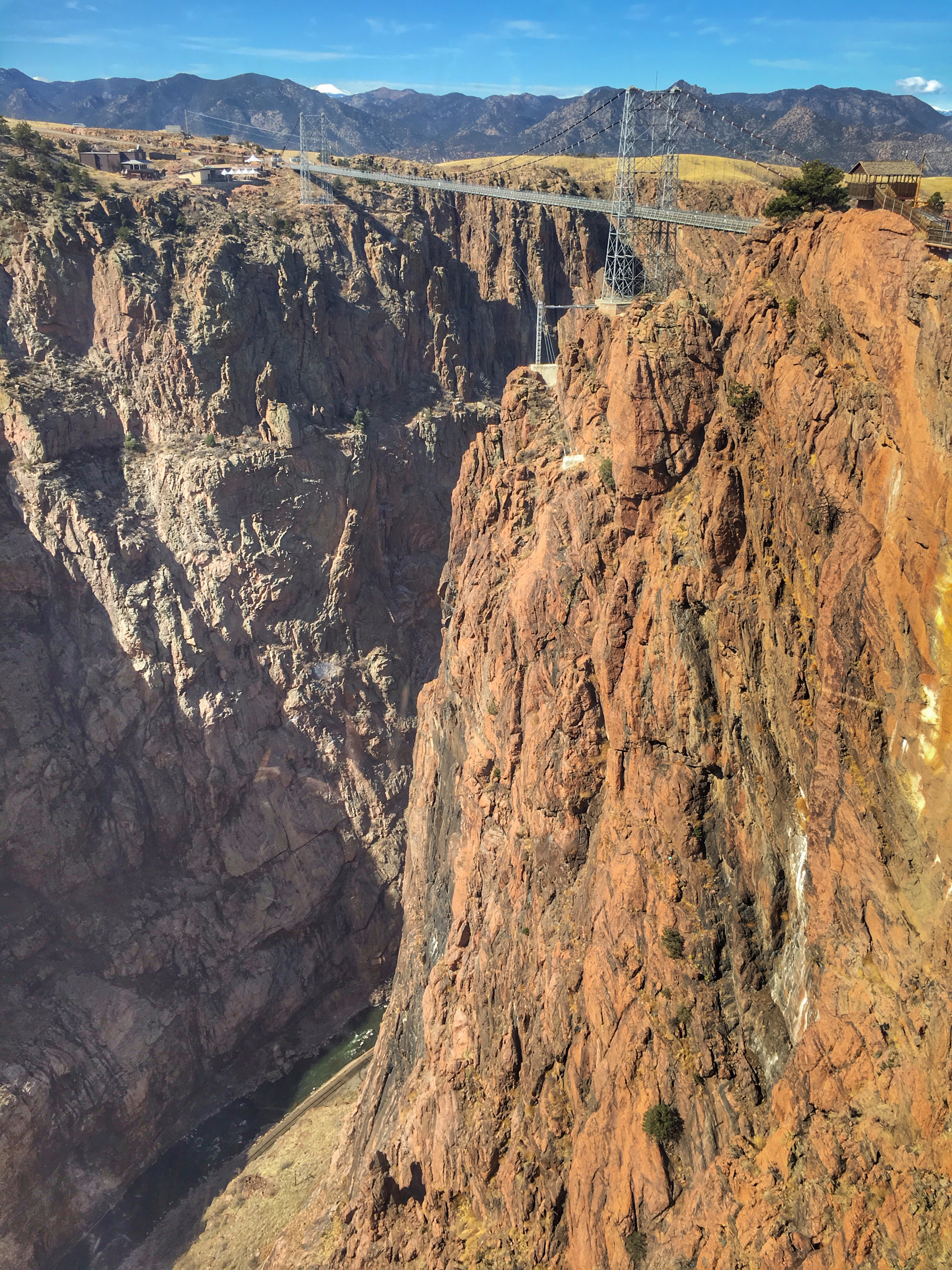 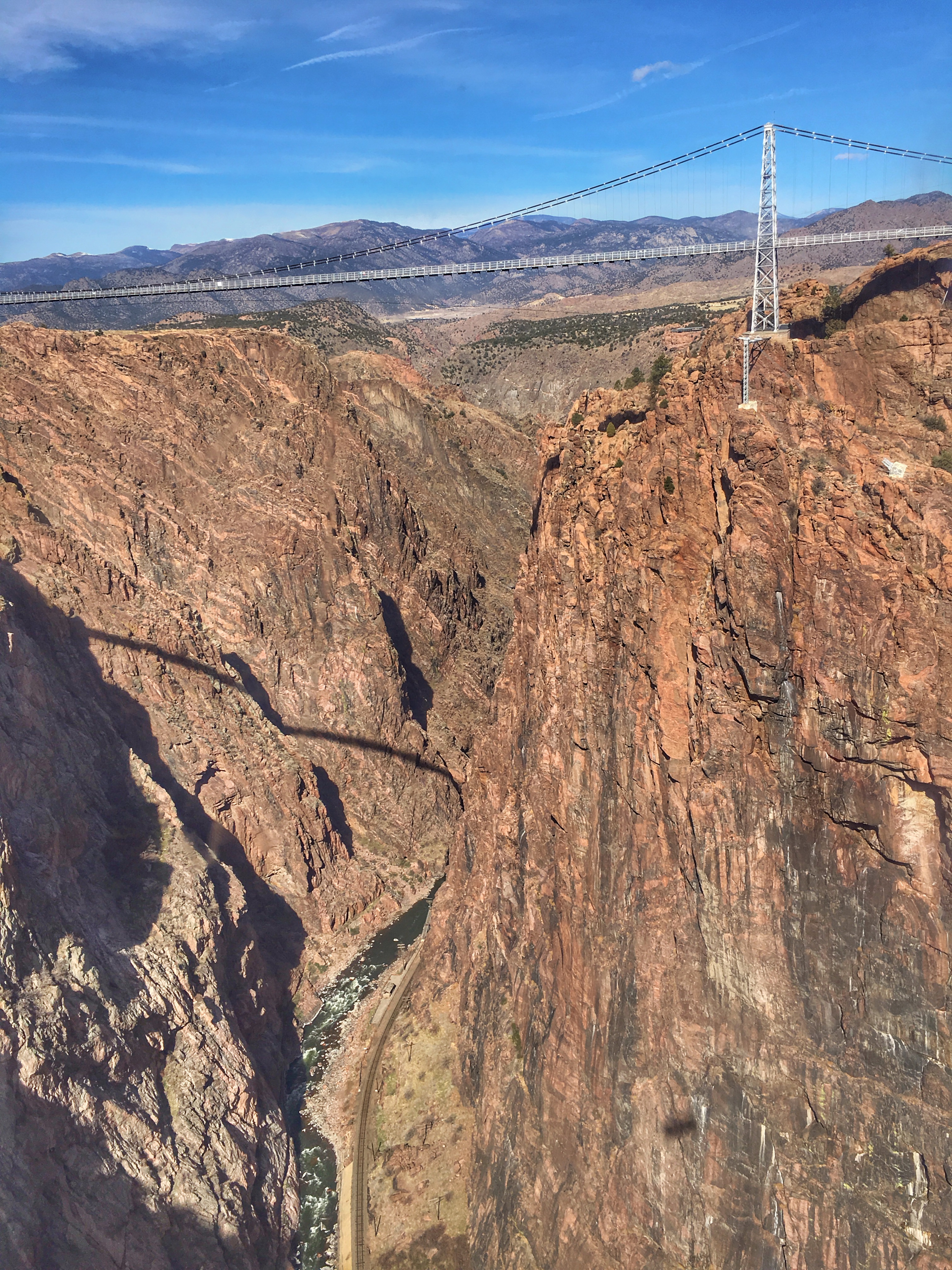 Most people were taking the gondolas one way and then walking back across the bridge, but since we could ride as often as we wanted, we just turned around and rode back. This time we had our car to ourselves.

We walked over to the bridge. At an overlook on the north side of the gorge, we saw a Peregrine Falcon circle past just above eye level and close. 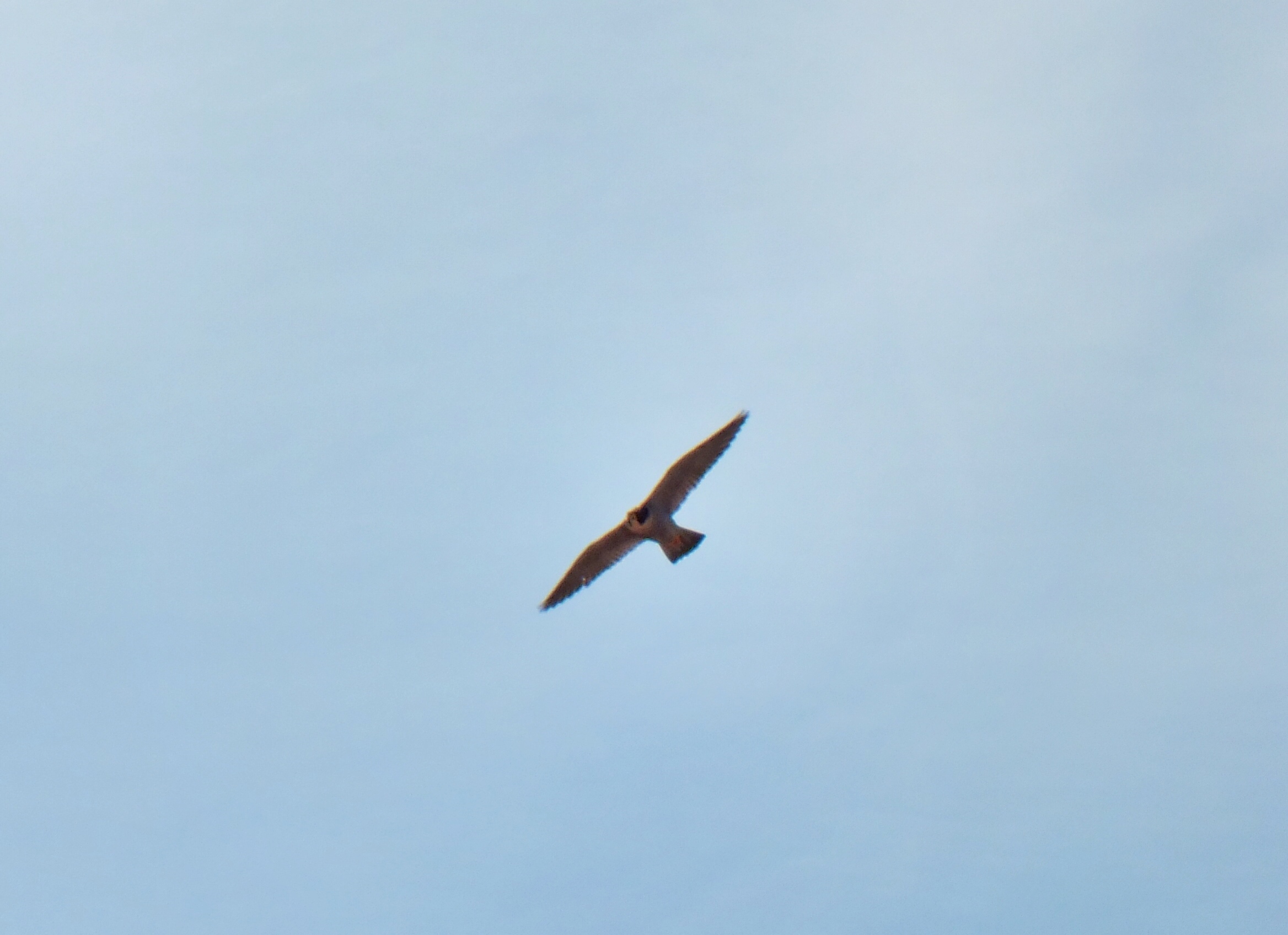 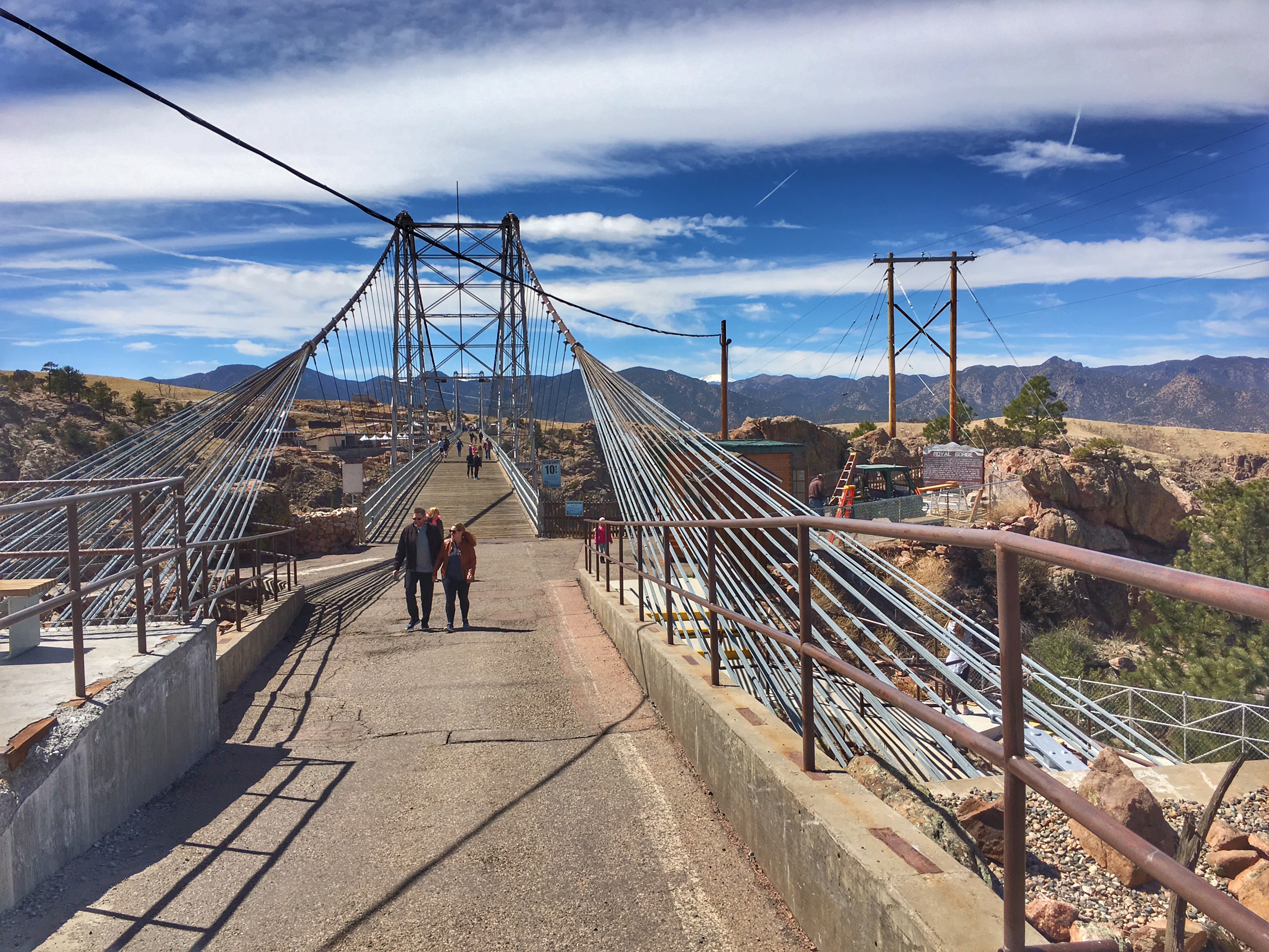 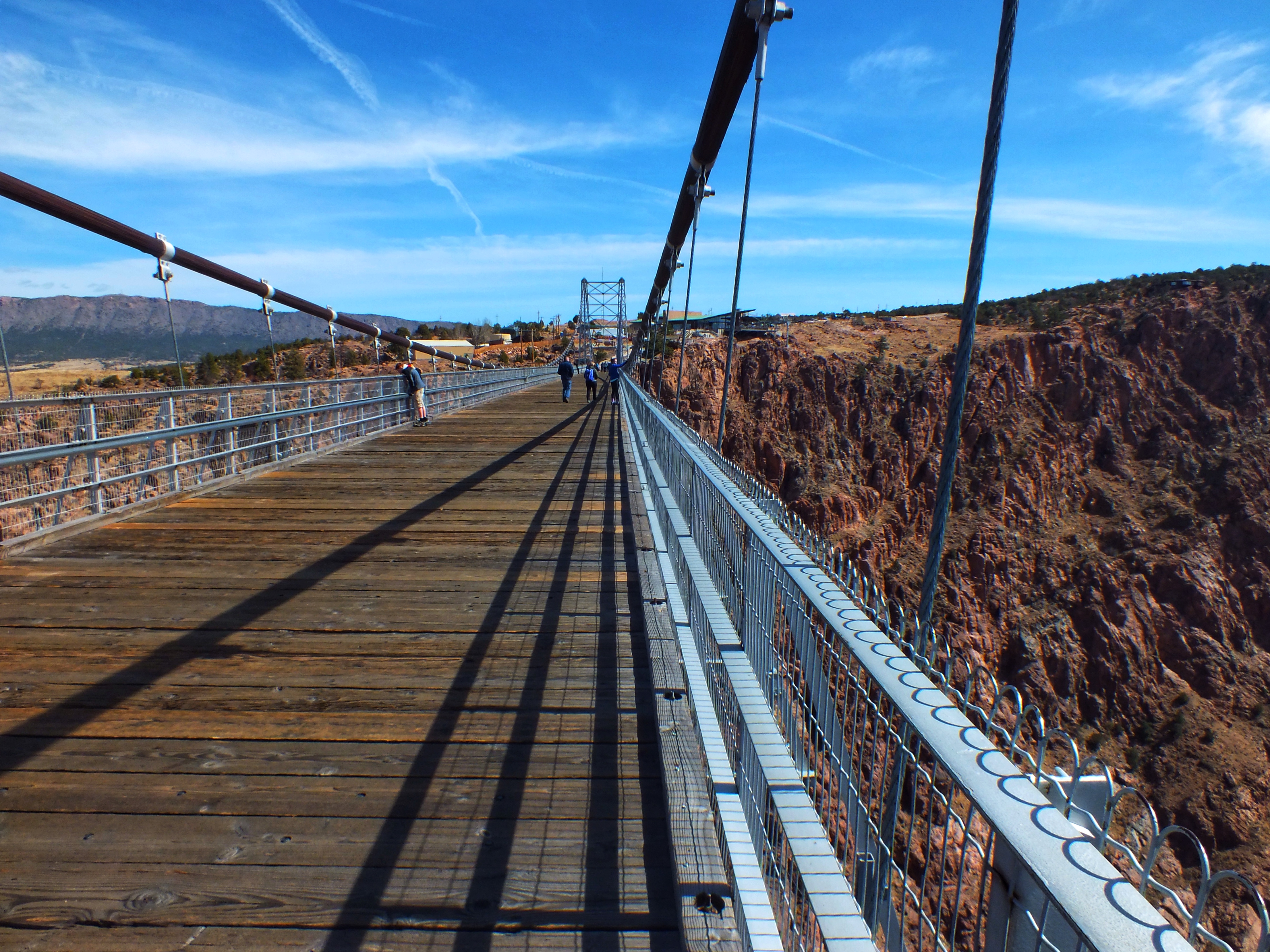 Here’s a little Royal Gorge humor that I thought was actually pretty funny. 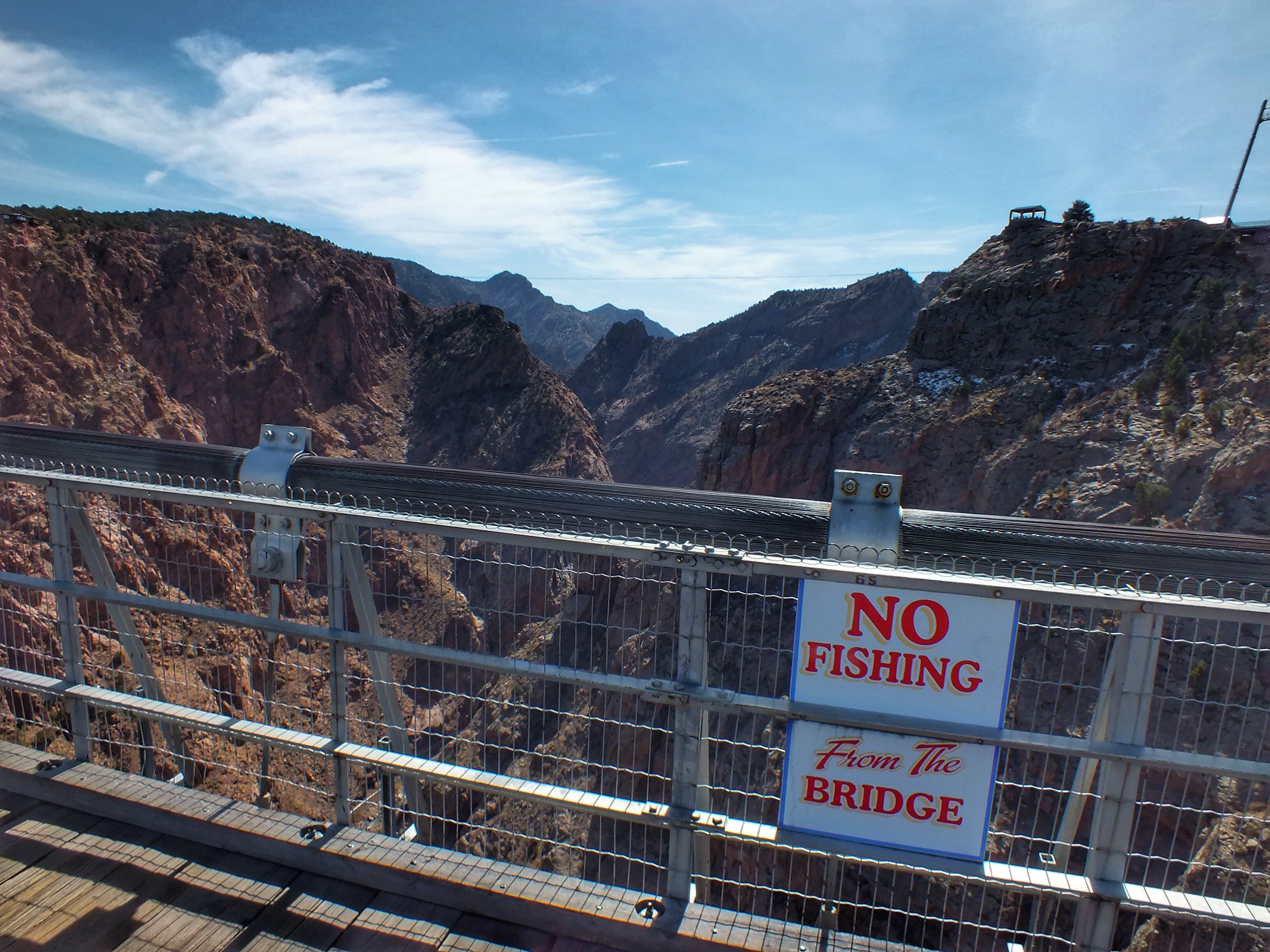 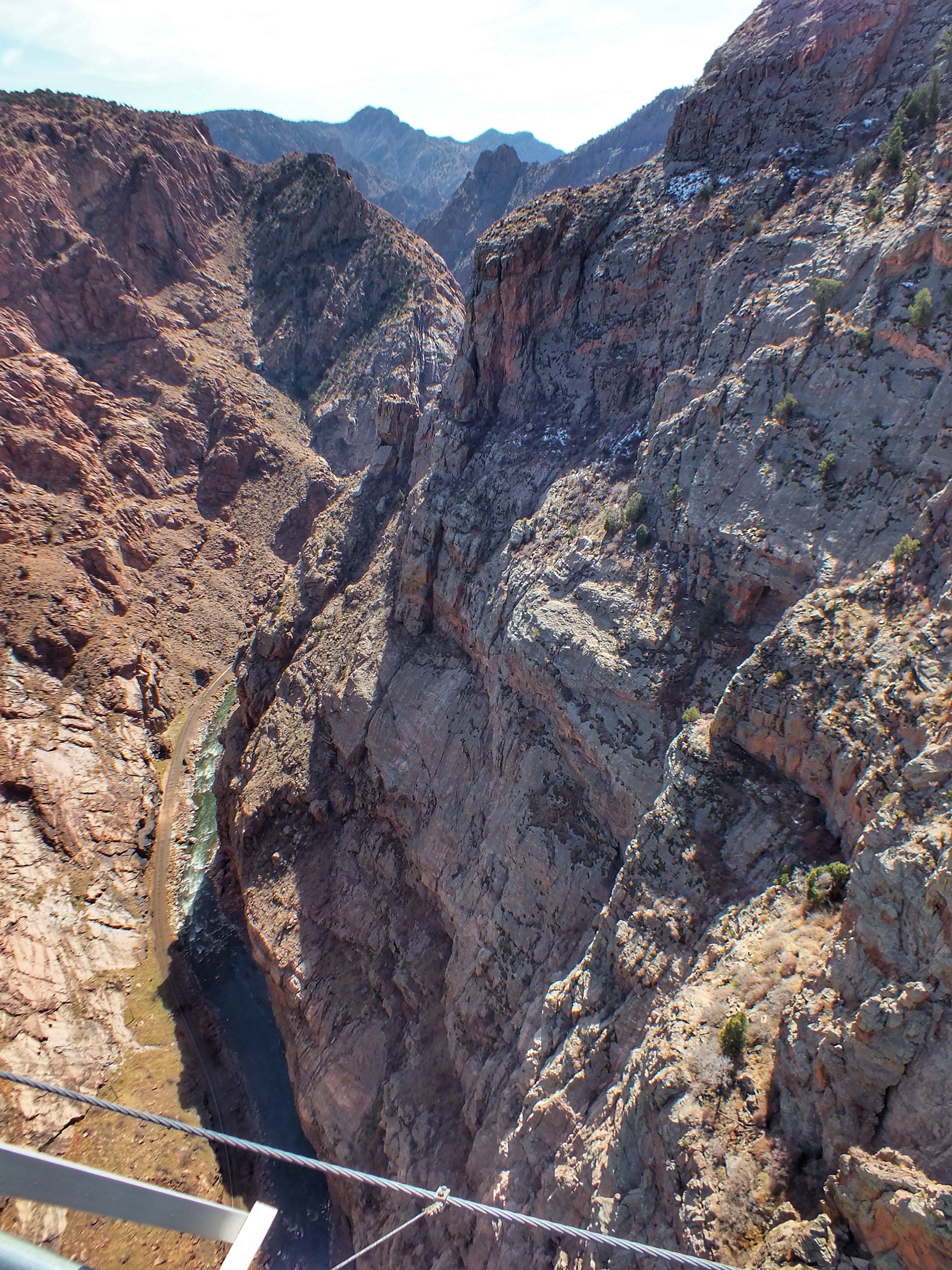 After riding the gondolas and walking across on the bridge, we stepped into the theater and watched a movie about the gondolas and the bridge (and the railroad and the fire). I dashed up to an overlook and took a couple panoramic photos. 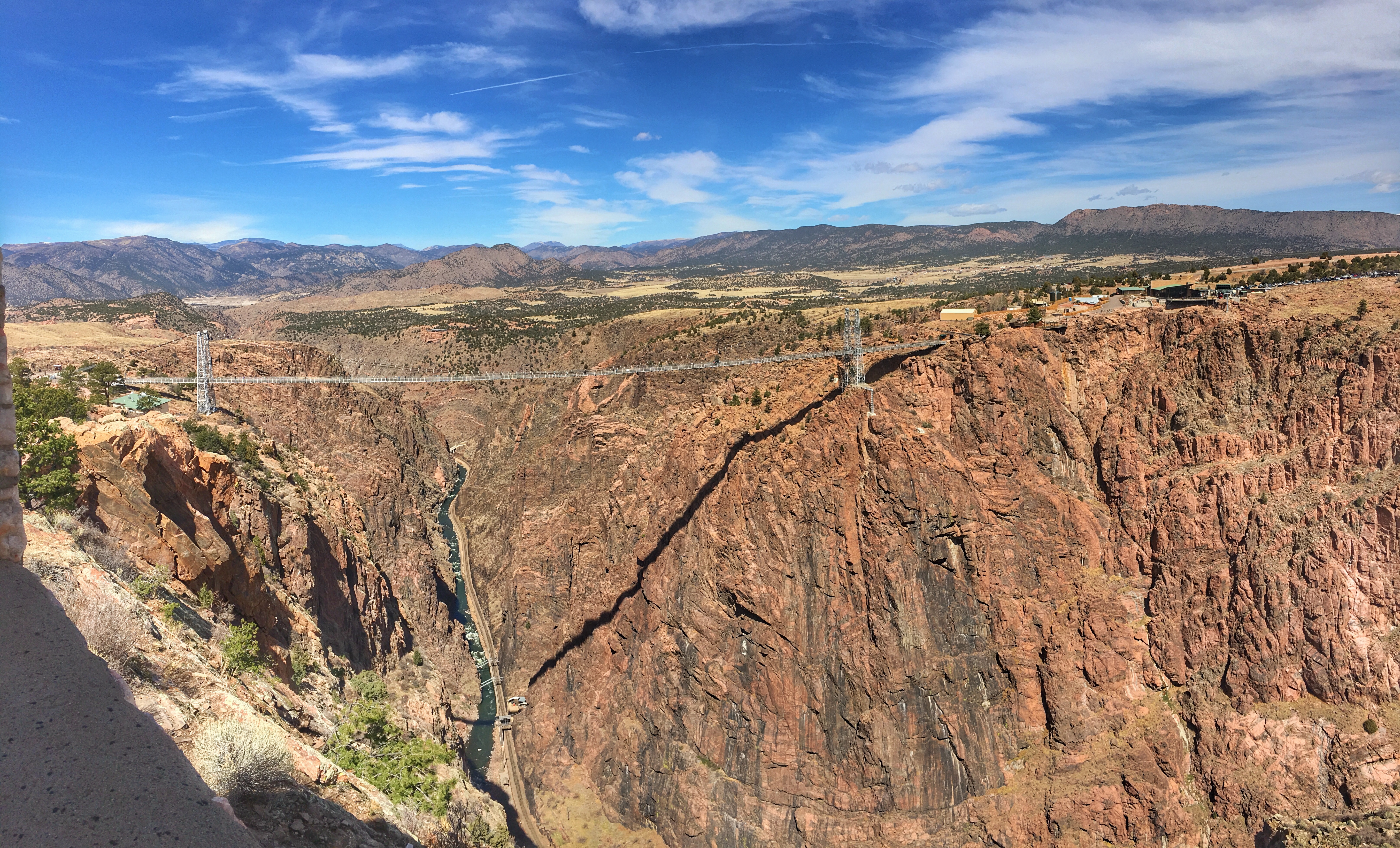 We then walked back across the bridge.

Looking west into the gorge. The hanging bridge that carries the train tracks though the gorge was built because there wasn’t enough room for the railroad and the river. The beams were anchored into the walls and the outside of the tracks were hung over the water. Since then, more footings have been built underneath so that only 10% of the weight hangs from the beams. The other structure in the right foreground is the bottom of the old incline. The wire is part of a system put in place a few years back to keep the bridge from swaying in the wind. 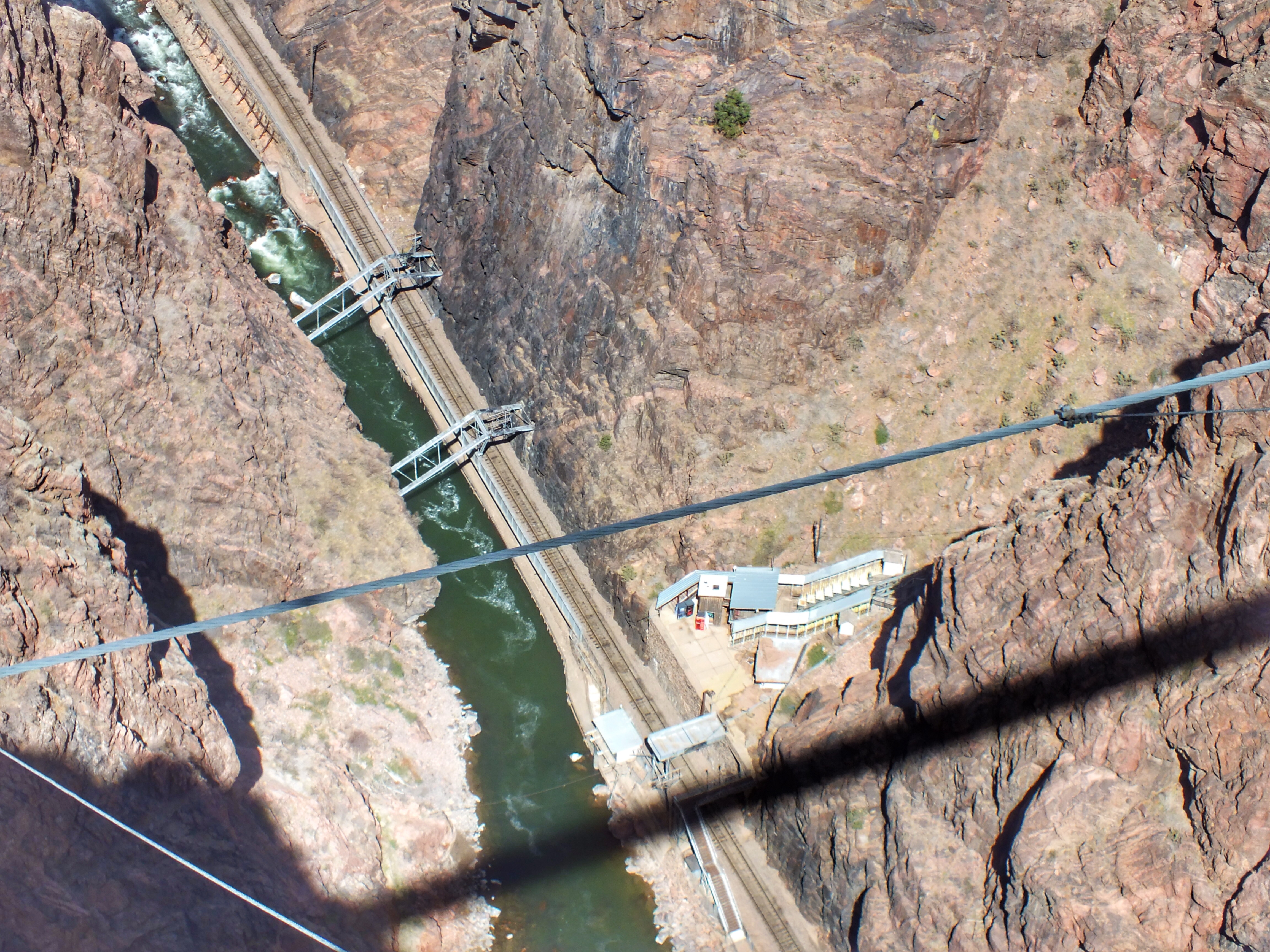 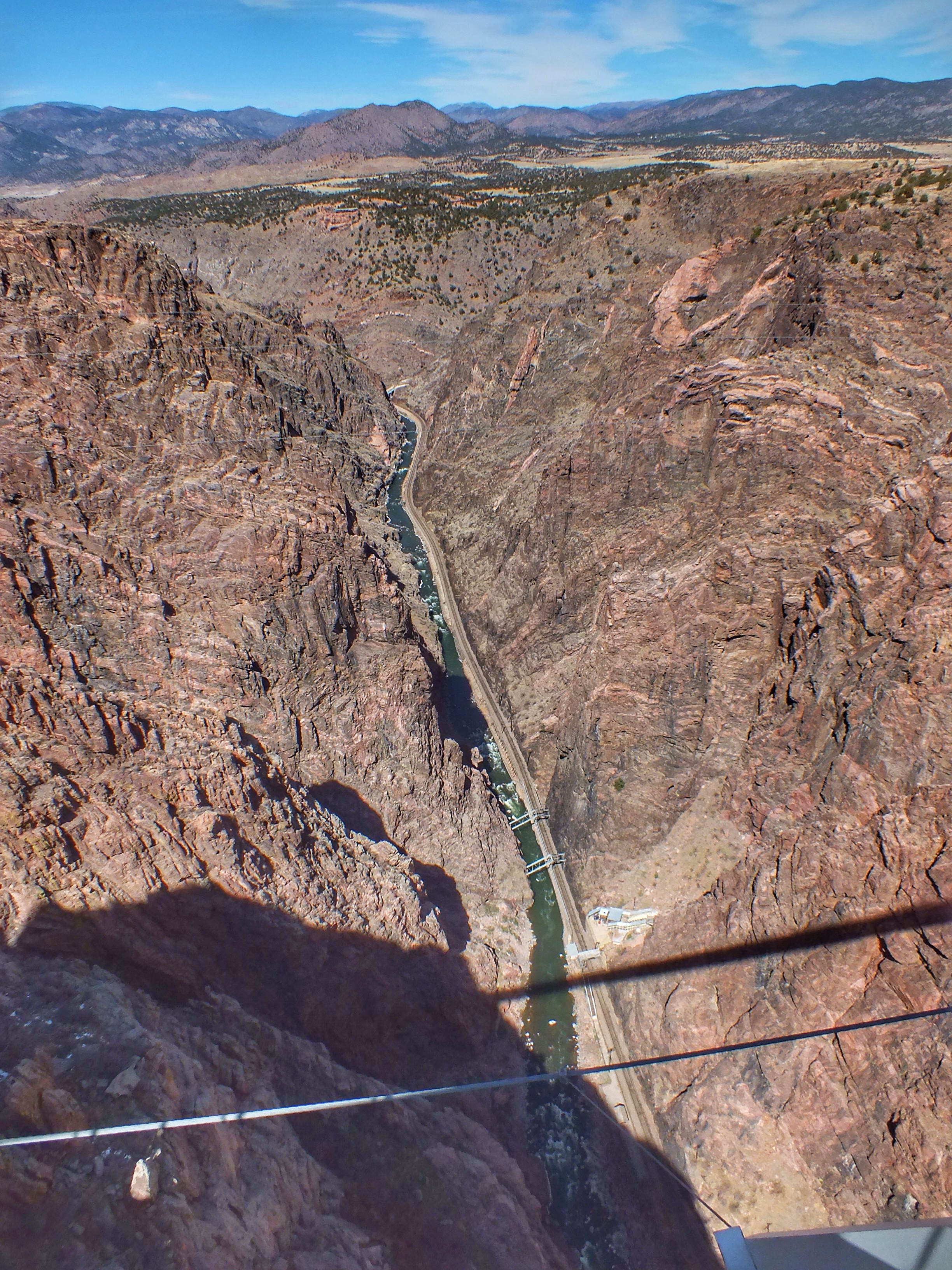 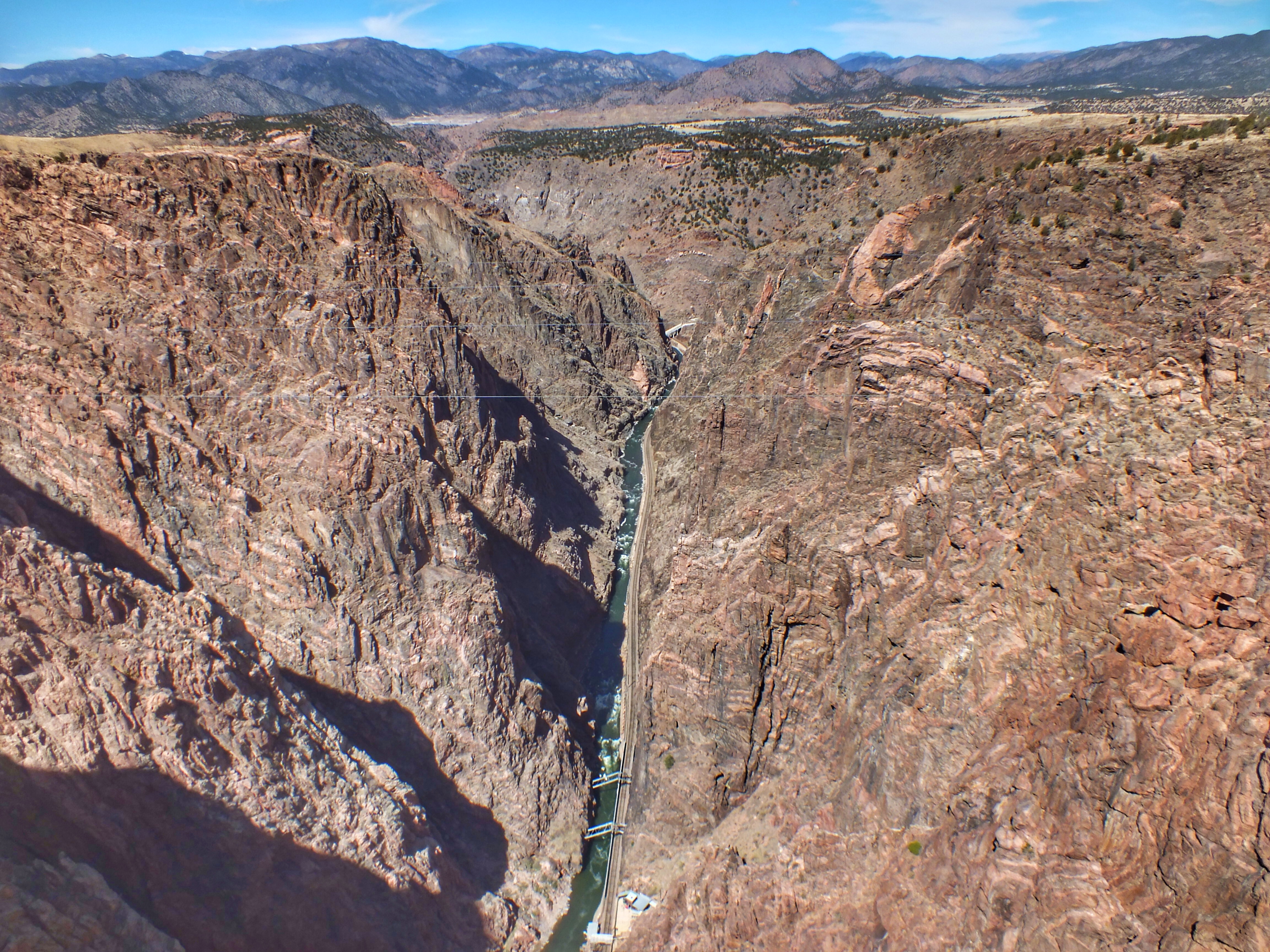 We ate an expensive and mediocre lunch in the cafeteria and debated whether to ride the gondolas again. But the park had filled up and we knew we’d be crowded in with a lot of other people, so we decided against it.