Seven Falls is the name of a tall waterfall in Cheyenne Canyon in southwest Colorado Springs. The creek that runs down the canyon isn’t large. There are some terraces along the way, but it’s a stretch to figure out how they find seven falls. But it’s a big tourist attraction in town and we decided we needed to see it at least once.

In the not too distant past, it was purchased by the Broadmoor, the ritzy hotel that owns half the town. It used to be a more interesting place—if you can believe the old man on our shuttle bus. He told stories of going there years ago when there were Indian dancers and Christmas carolers and you could drive right up to the base of the falls. 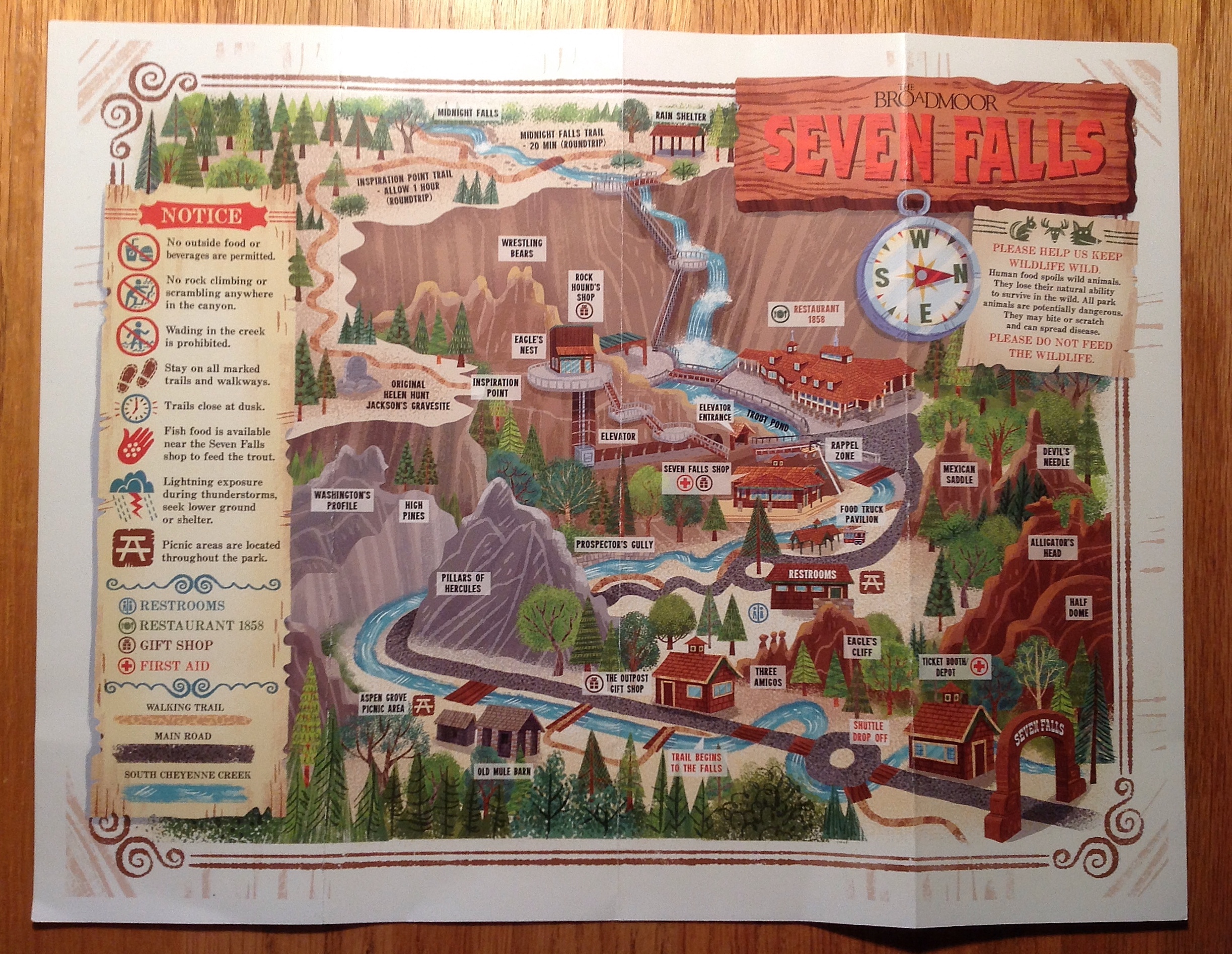 No more. We parked at the hotel and took a shuttle up the canyon. We were dropped off at a gate next to a booth where we had to pay $14 each to get onto the grounds. We chose to walk from there to the falls. We passed a small gift shop where we bought a glass Christmas tree. Santa was sitting inside, but he looked lonely. Mrs. Claus was talking on the phone. 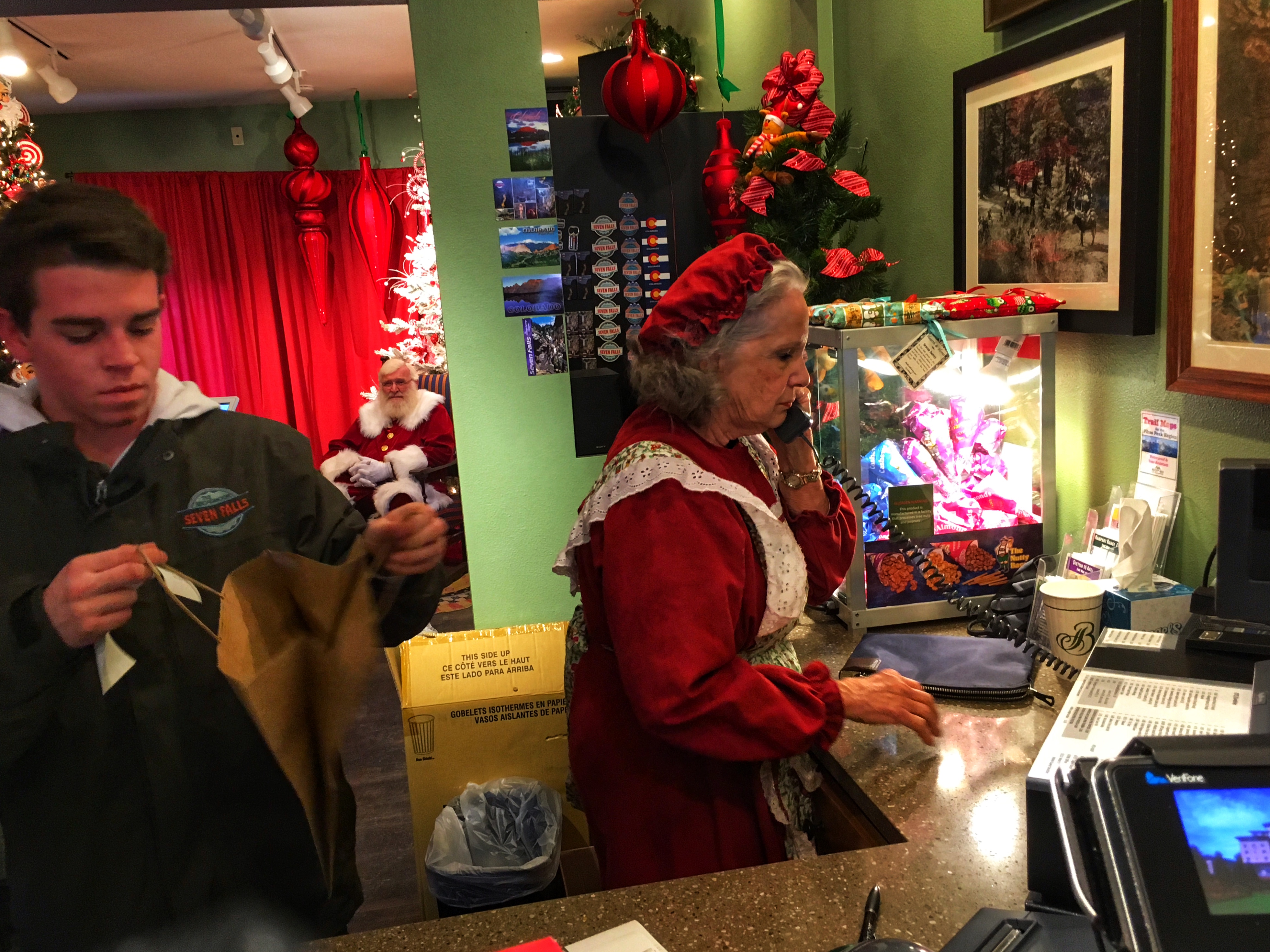 The canyon itself was impressive. 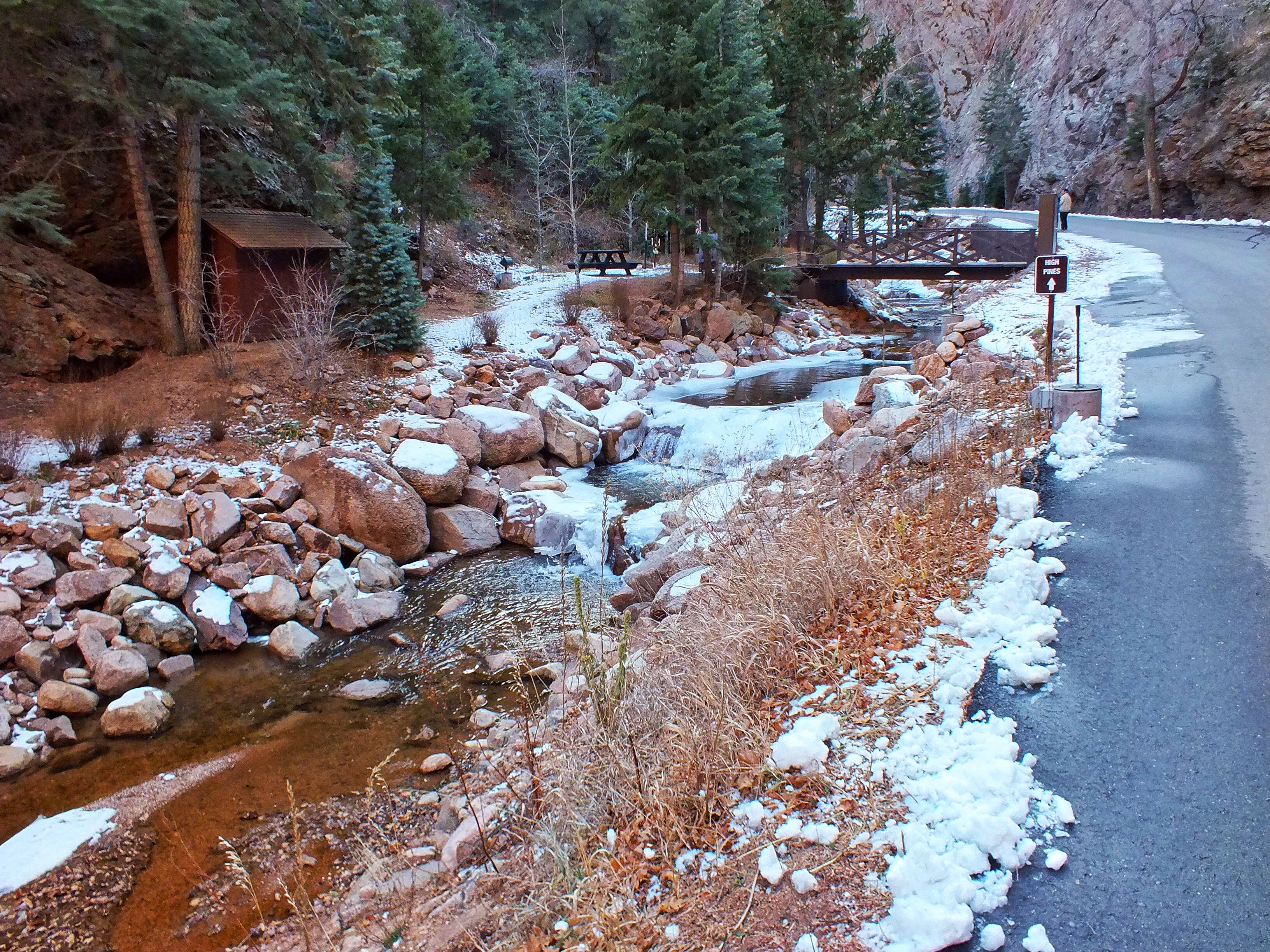 But it was amusing how hard they worked to make attractions out of everything. One sign pointed to “Washington’s Profile,” a rock on top of a cliff that did kinda look like George. The next sign said “High Trees.” I guess they were wanting us to look at the two evergreens in front of George. Why they were interesting, or why they deserved their own sign, I’m not sure. 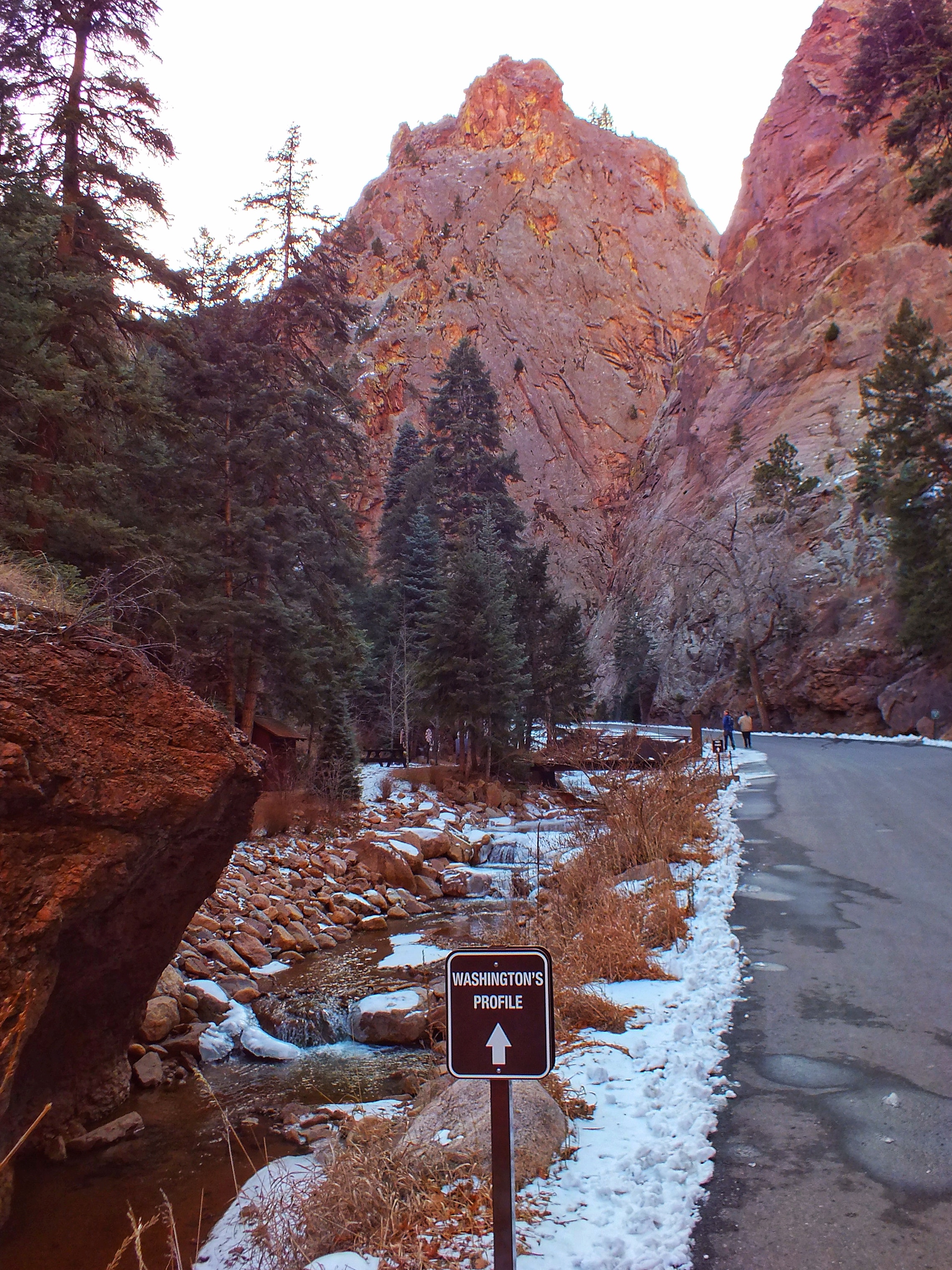 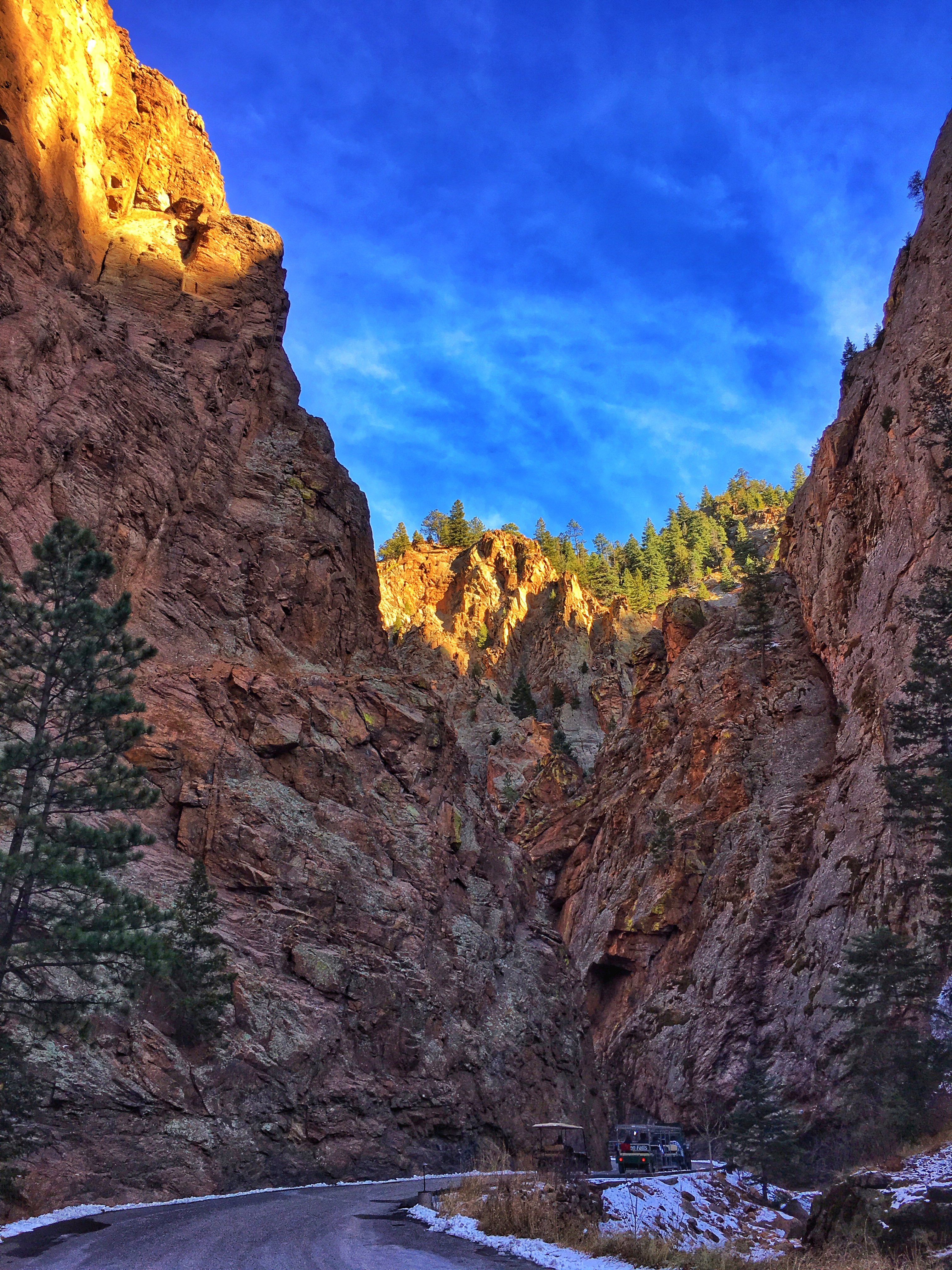 The road ended by a gift shop. There was also a tunnel entrance and a restaurant. We went inside the gift shop briefly, then followed the tunnel back to an elevator that took us up to a viewing platform—and another gift shop. 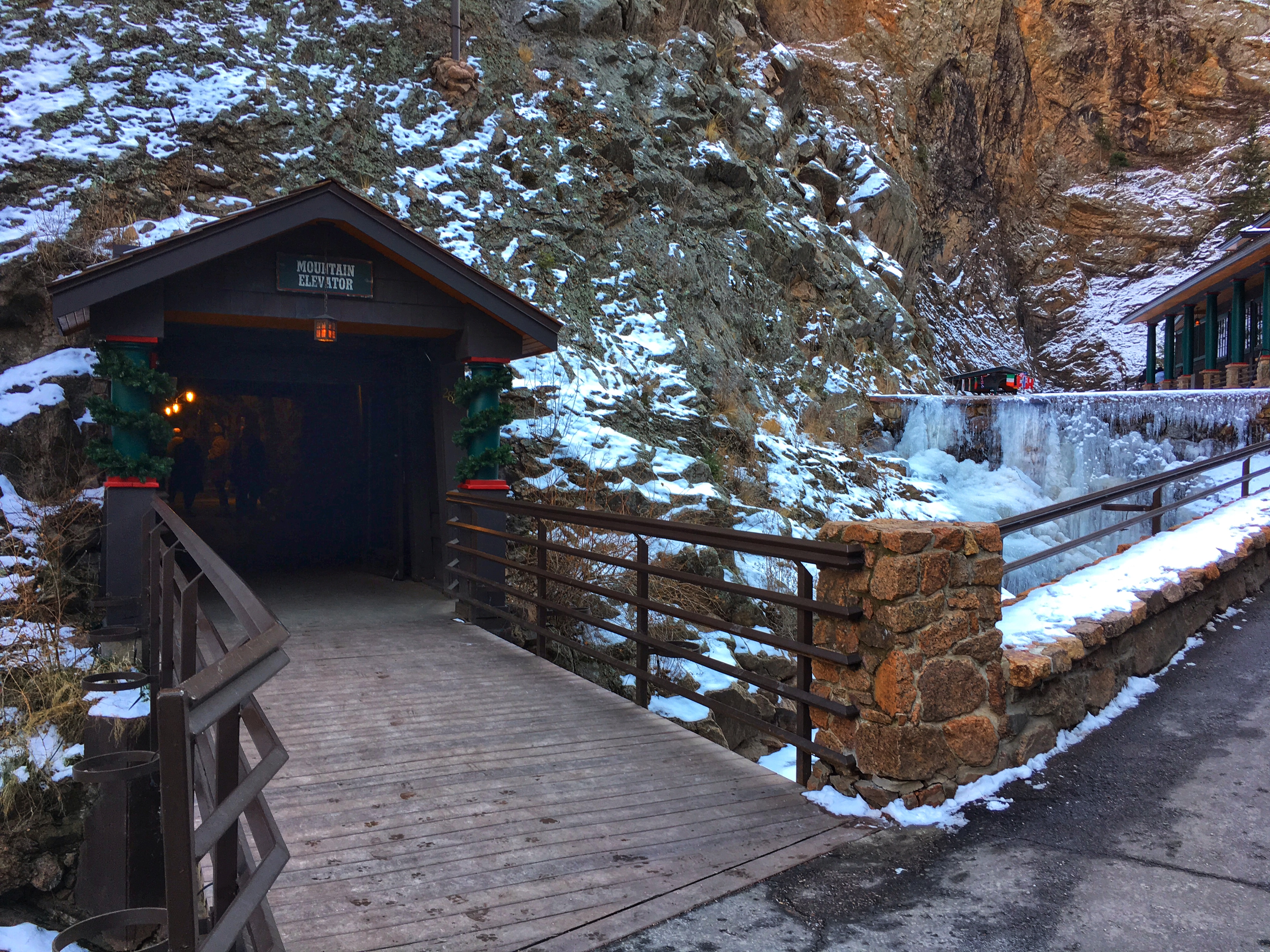 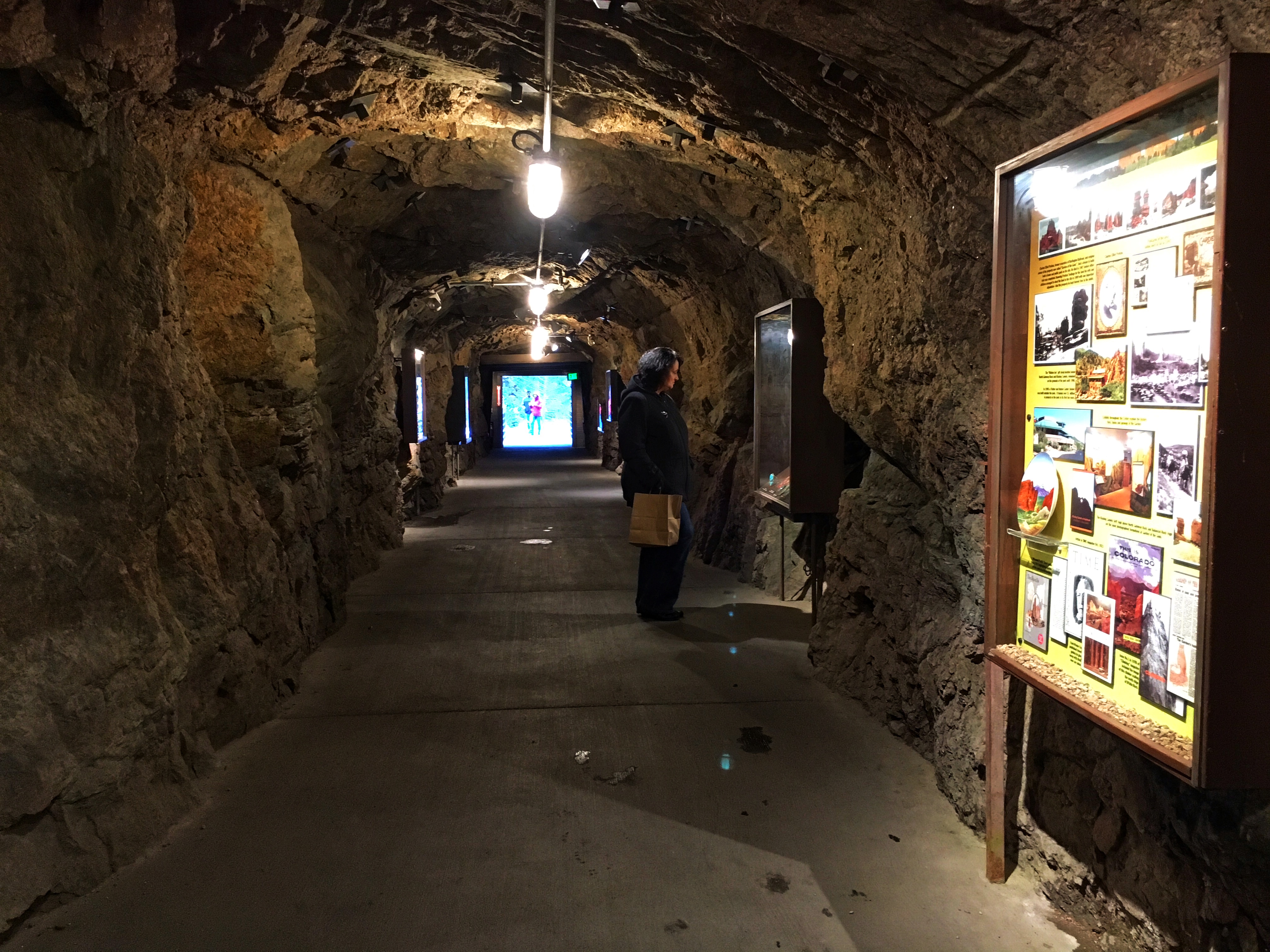 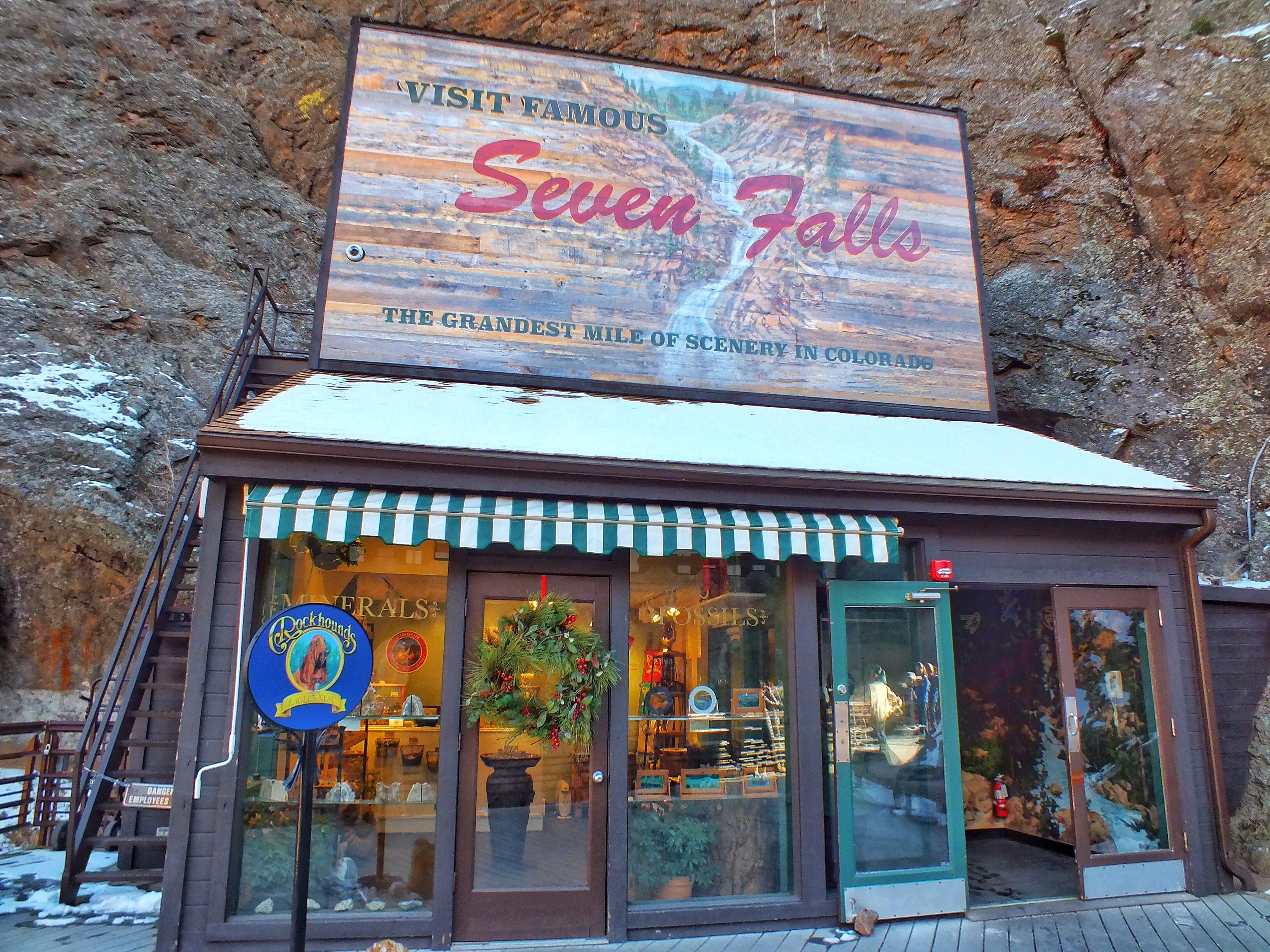 The view from the platform would have been more impressive if the sun hadn’t been directly in our eyes at the top of the falls. I’m guessing mid-morning would be the best time to see this view. 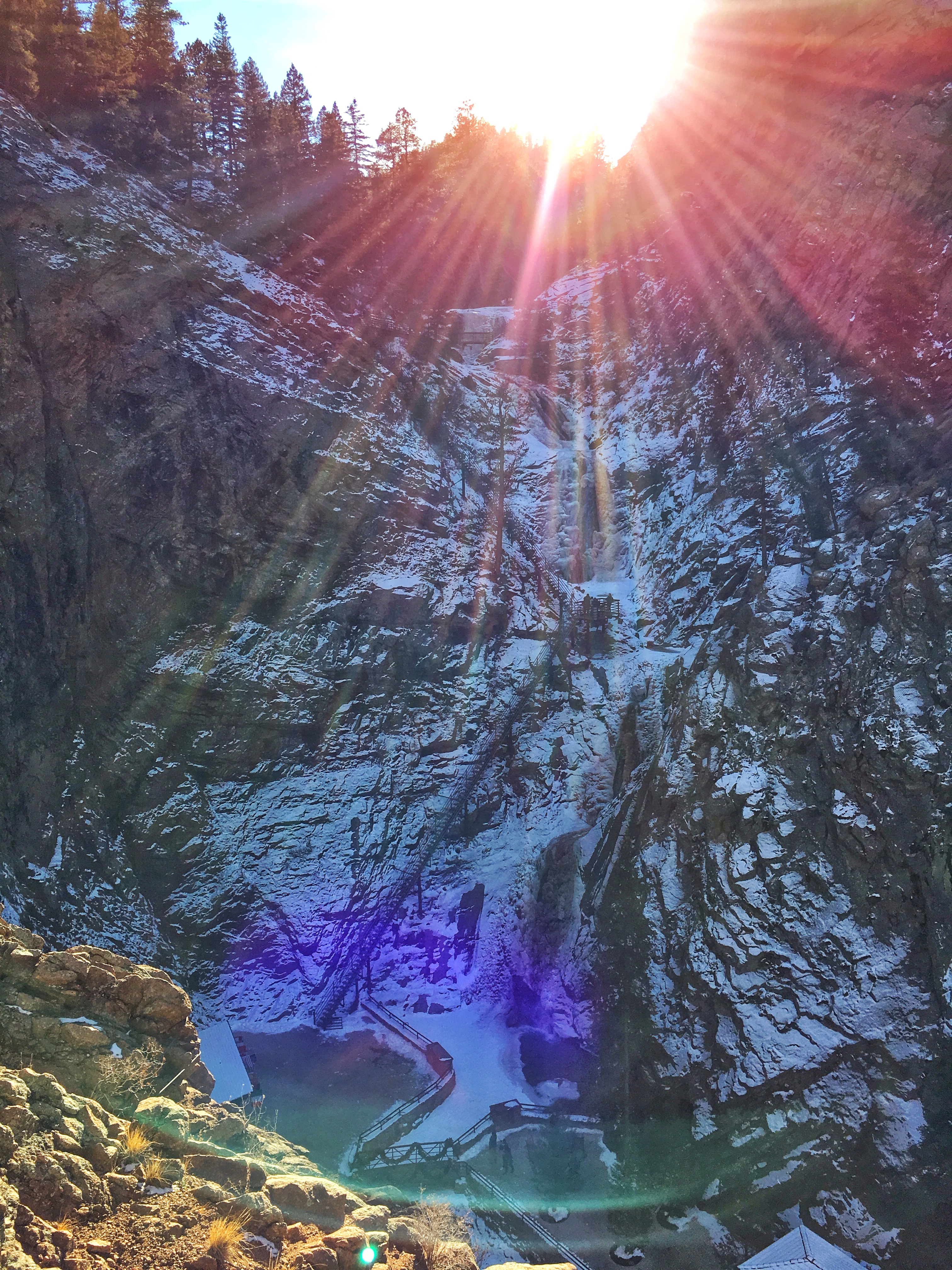 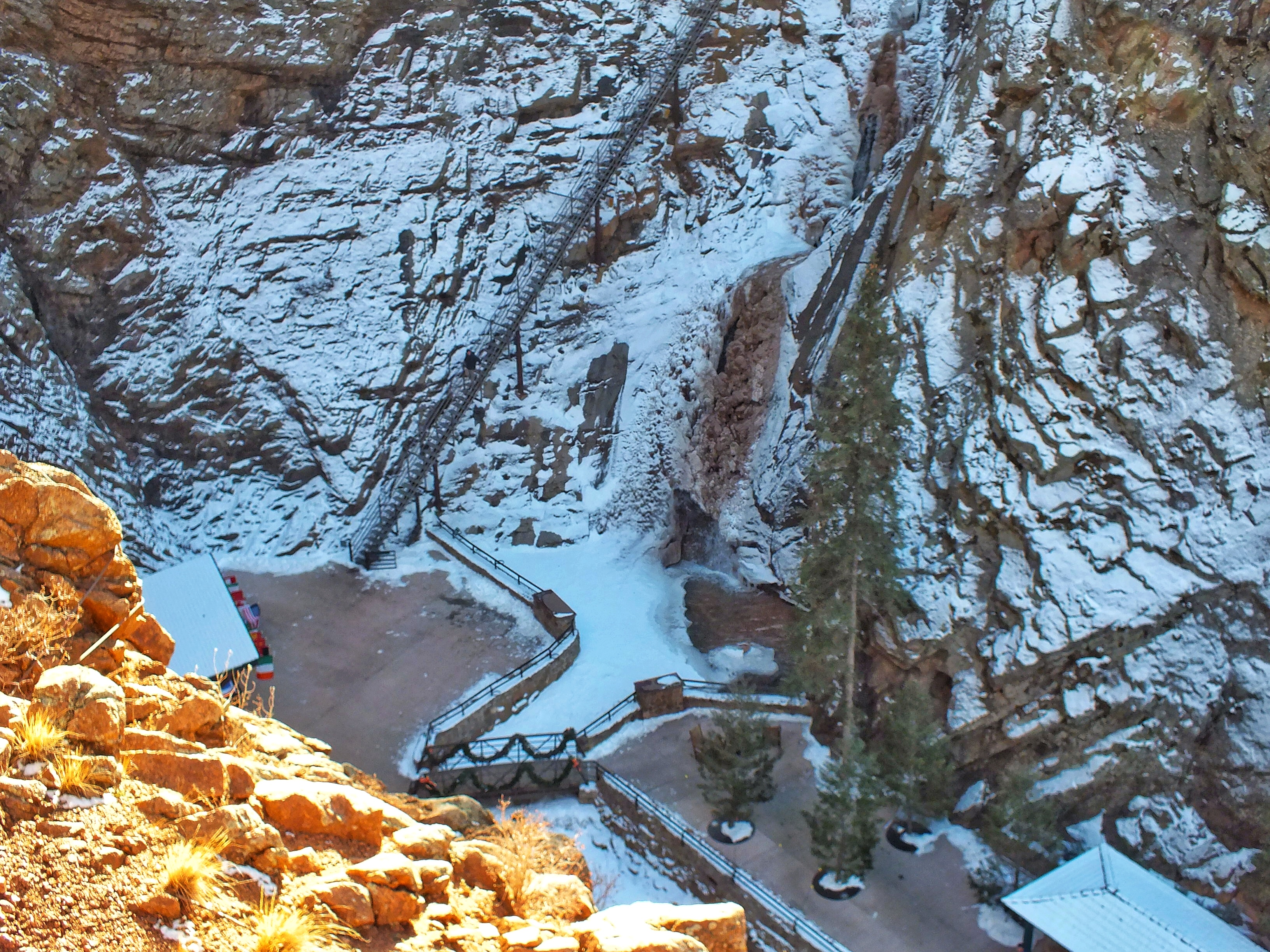 Much of the falls were frozen. Maybe a fifth of the length was open water. A handy sign gave us the names and descriptions of each of the “falls.” 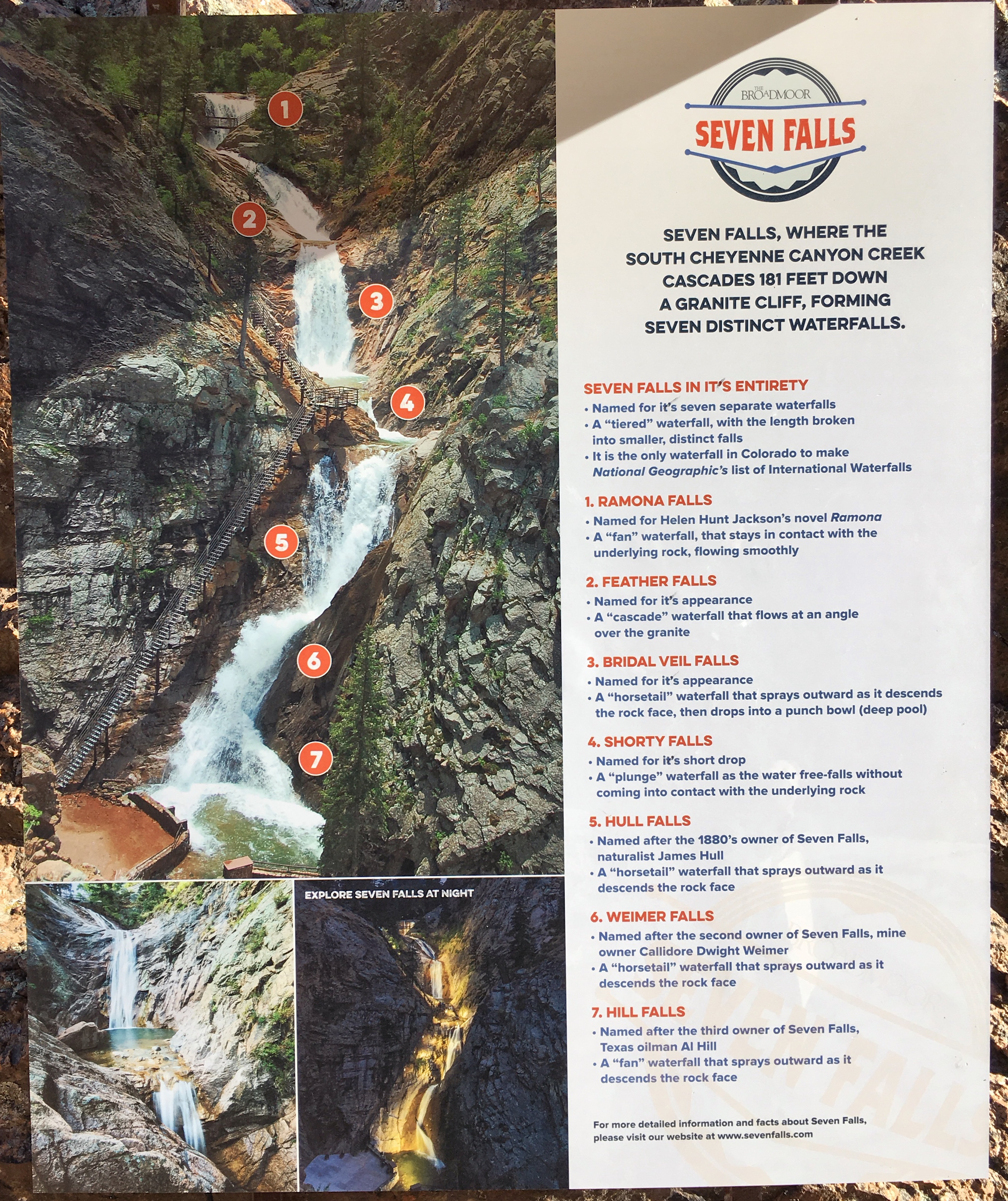 We walked to the base of the falls. My wife found a comfortable seat and relaxed as I climbed the 224 stairs to the top. 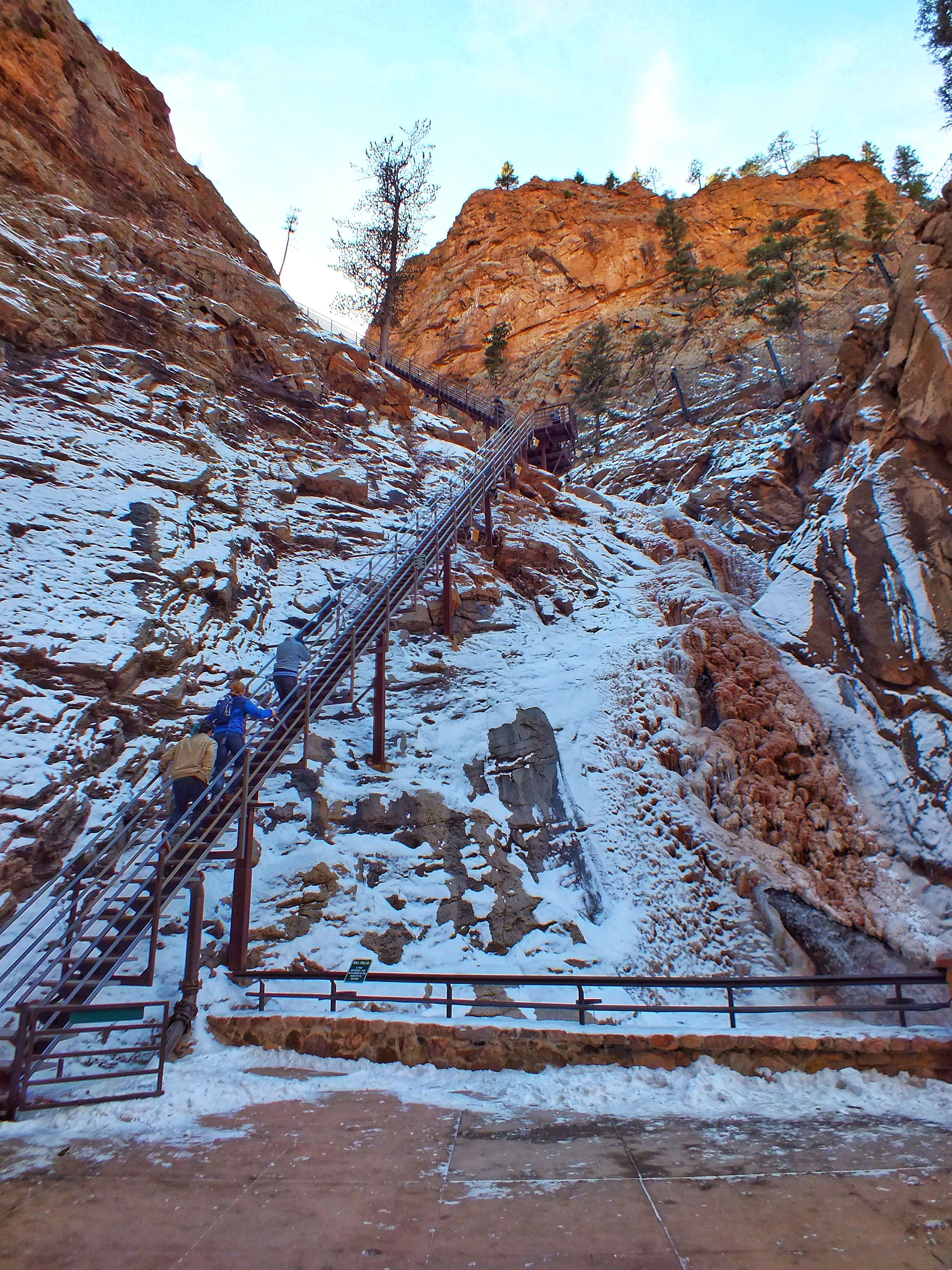 Sometimes I get achy and sore for no reason. I realize I’m getting older and wonder if I’ll have to slow down soon. And then I climb 224 stairs at 7,000 feet and pass guys half my age and I think I’ll be fine for a while yet. When I got to the landing two-thirds of the way up, three young men were talking to a woman. They were discussing the stairs and how steep they were and how afraid of heights they were. As I continued up the second flight, I heard one of the guys say about me, “He stopped halfway up, turned around and took a picture. No way!” The woman heartily agreed.  You can see my wife in her chair down at the bottom. This was the picture they couldn’t believe I had the courage to take. 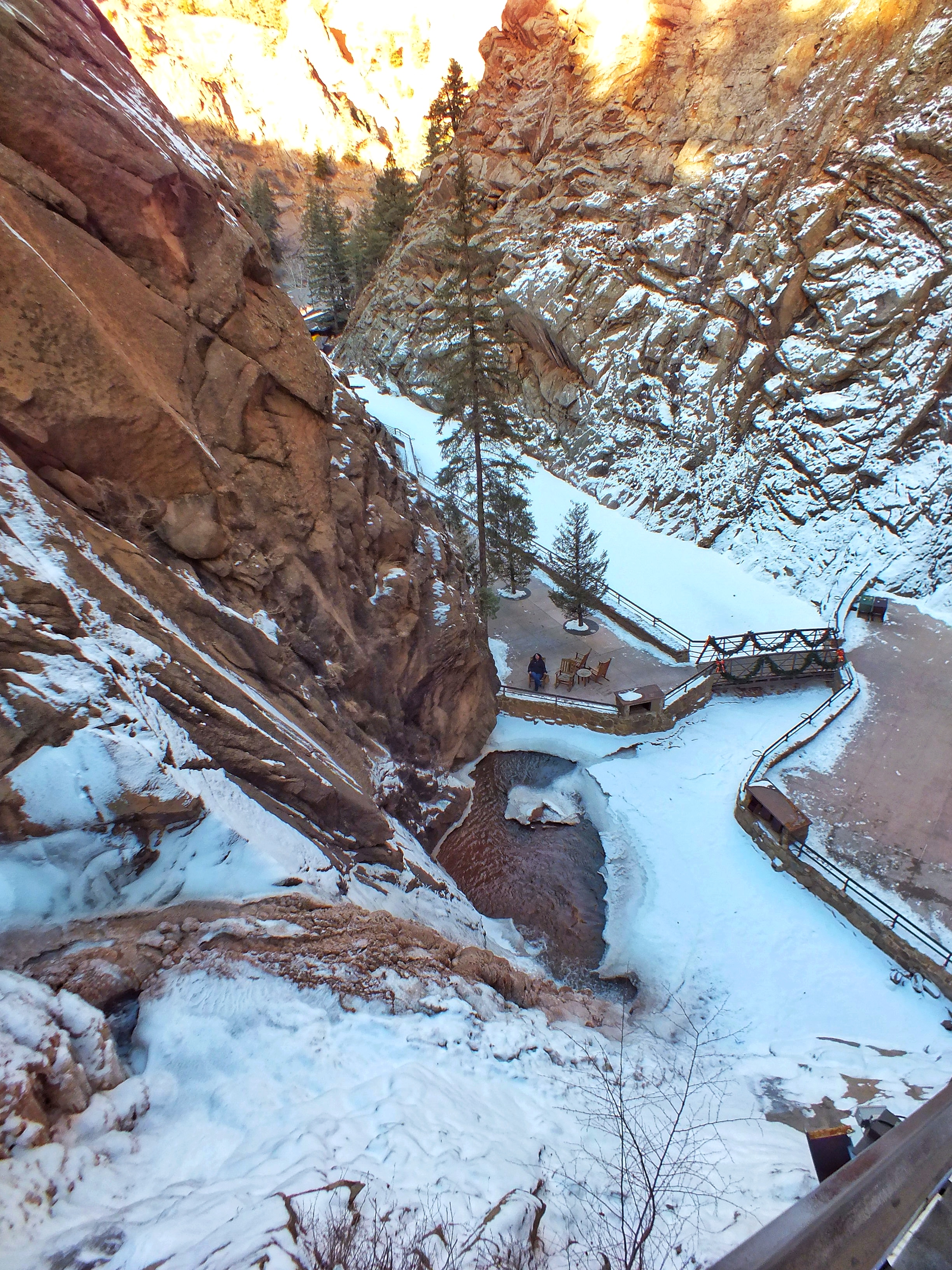 Here’s the topmost of the seven falls.

Above there were a couple trails. I took a short one to yet another waterfall. It was a pleasant walk, but the fall wasn’t large and was mostly covered with ice and snow. The creek along the way was pretty.

Here’s the view from the top of the falls looking down. 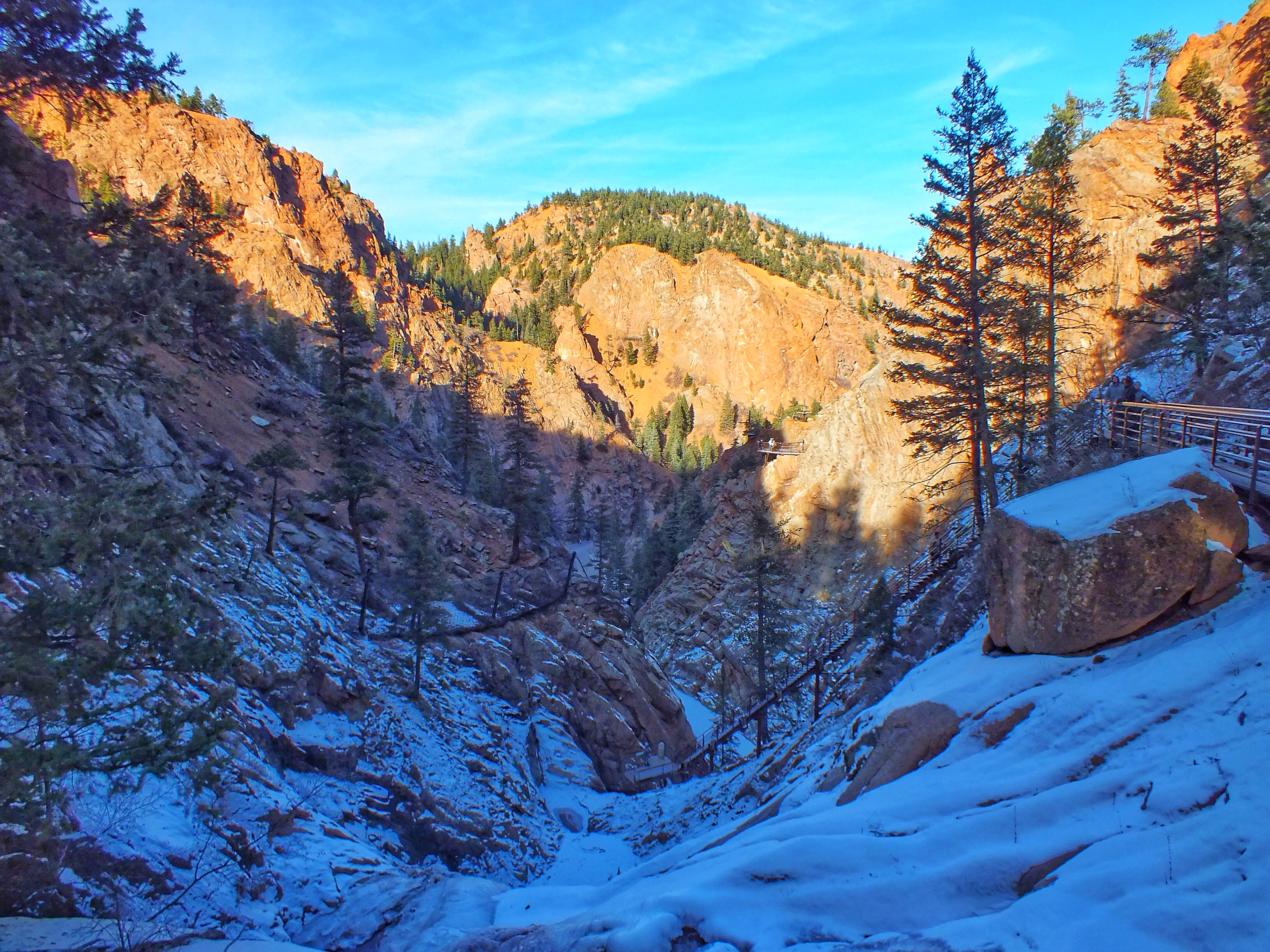 By this time, the lights along the falls were lit, although they didn’t have much of an impact yet. You can see a little pink on the snow on the left of the falls.

We ate a late lunch at Restaurant 1858 at the base of the falls. The name comes from the year when gold was discovered in the area. When I’d made the reservation, the woman informed me that it was fine dining (in other words, expensive) but that jeans and gym shoes were allowed because there was hiking. 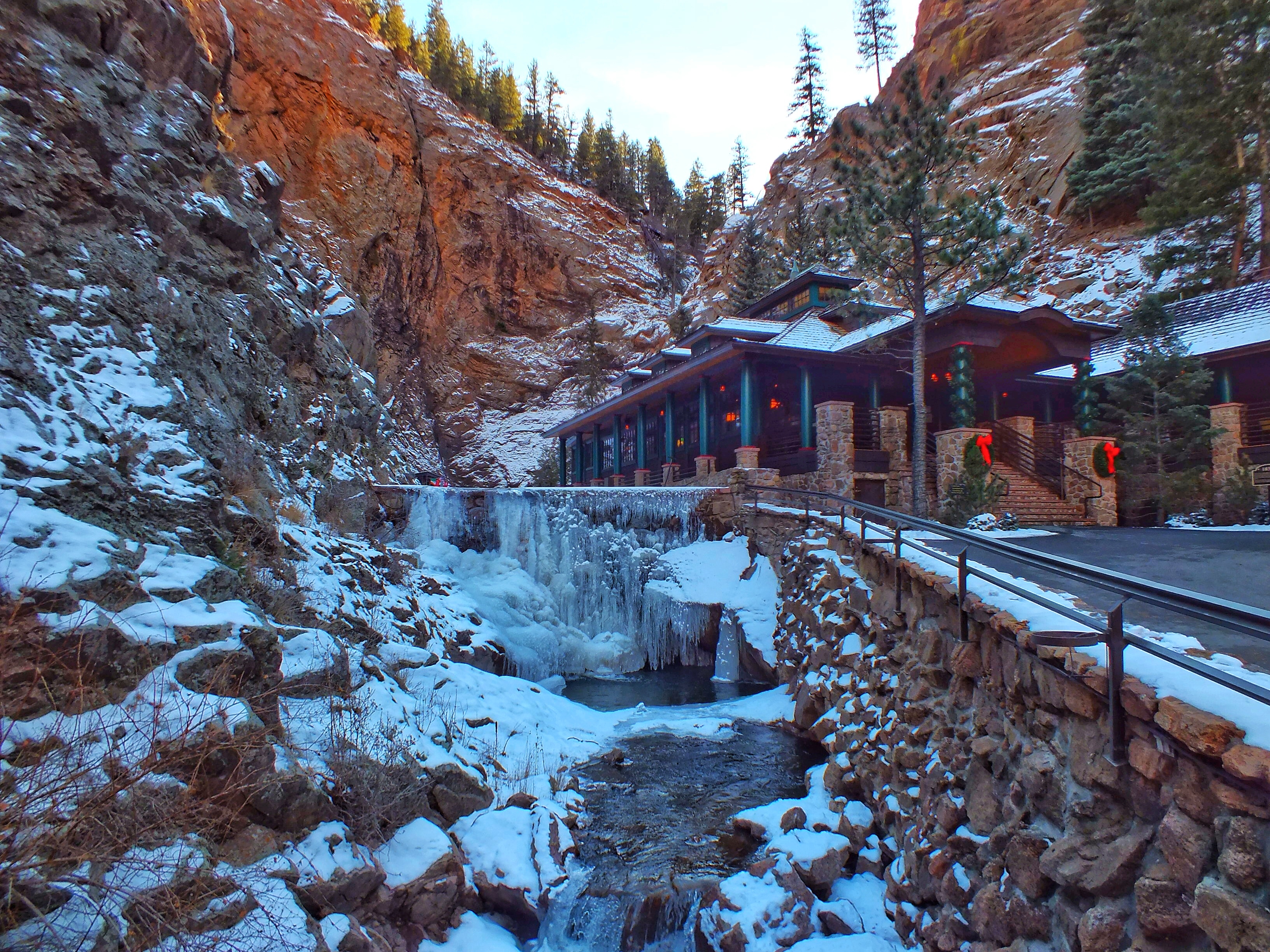 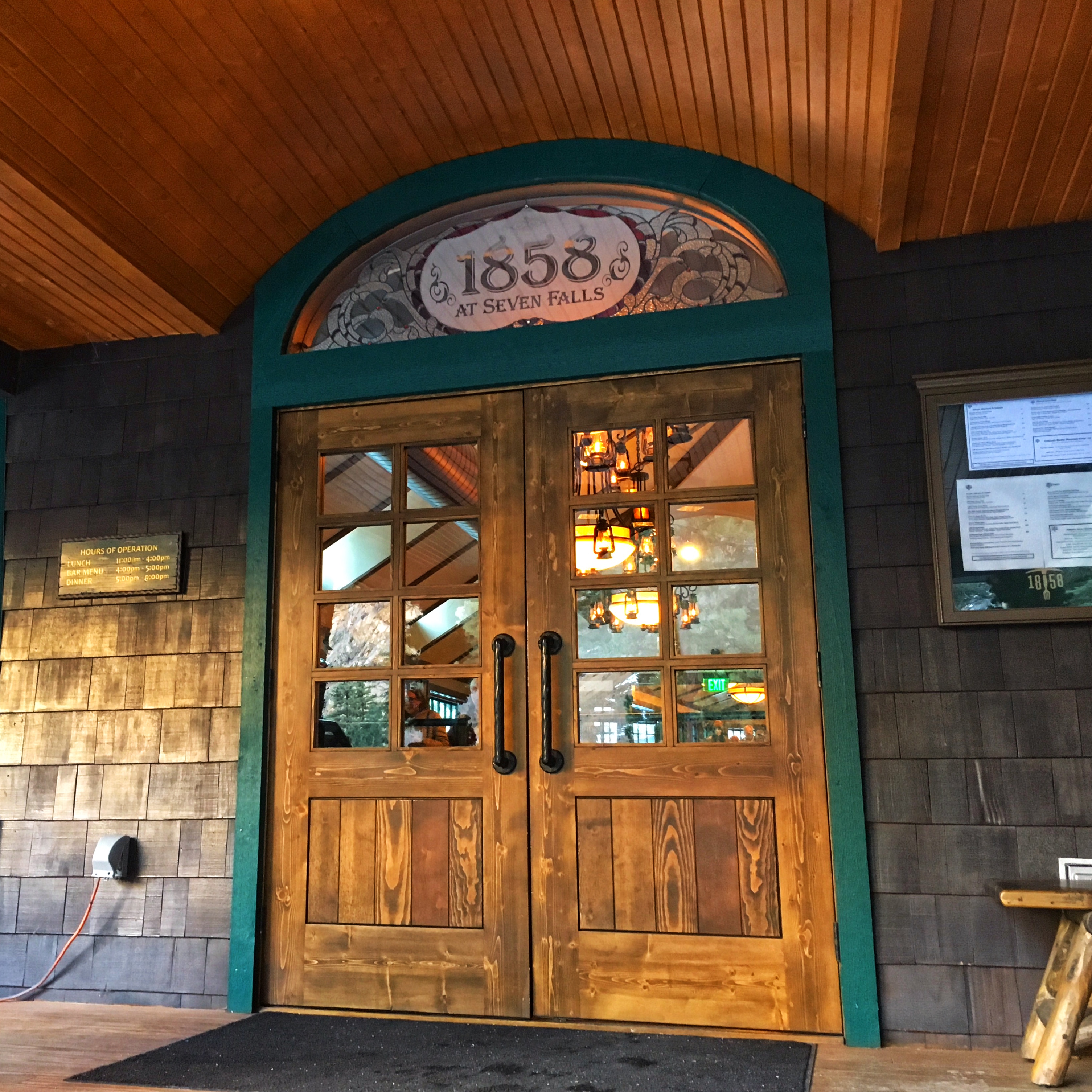 The restaurant was not at all crowded, which surprised me. It’s only open on Fridays and Saturdays, and you can only get to it by paying to get into the park. 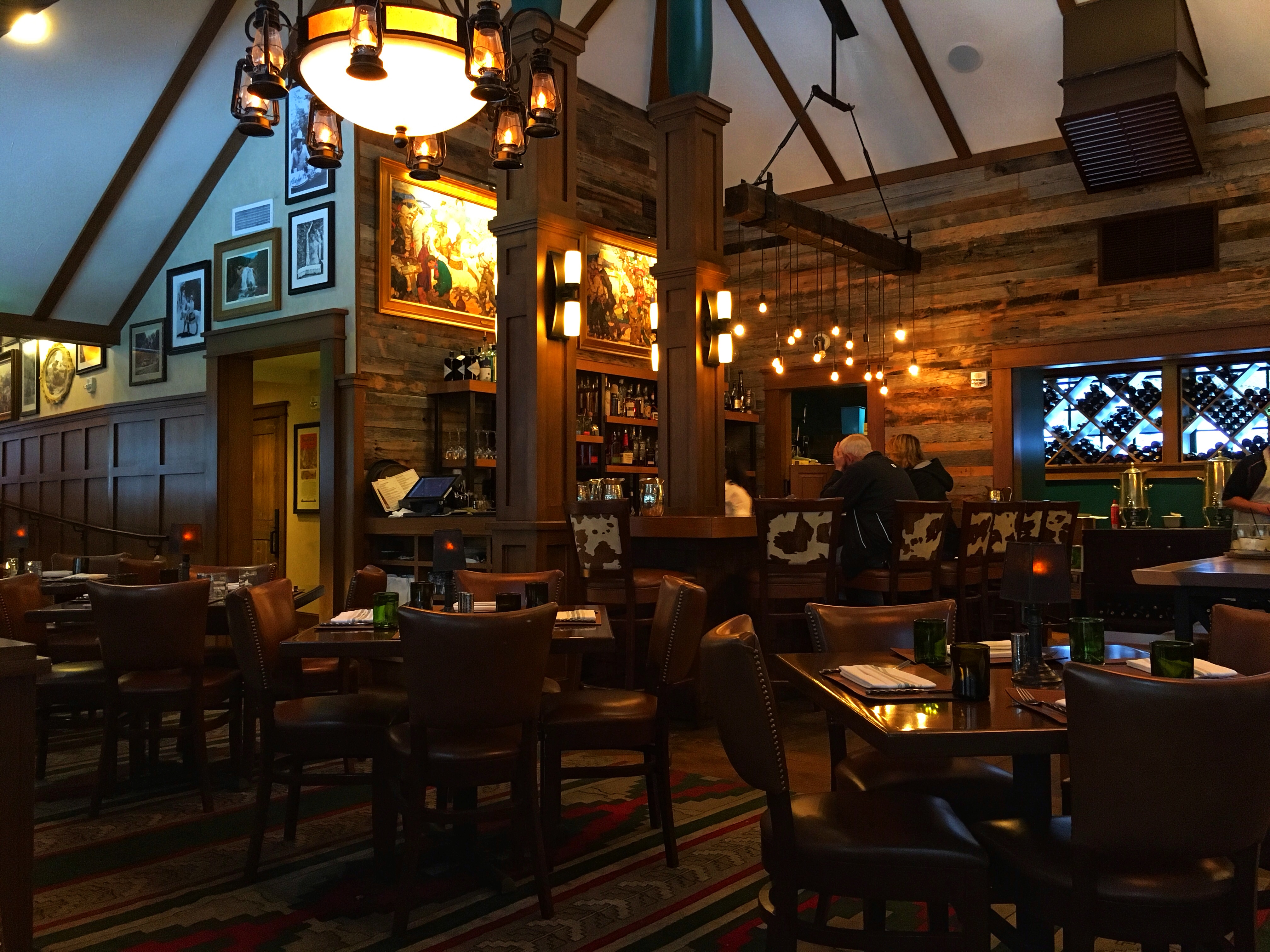 My wife could see down the canyon a ways, but my view was just a rock slope above a frozen pond. 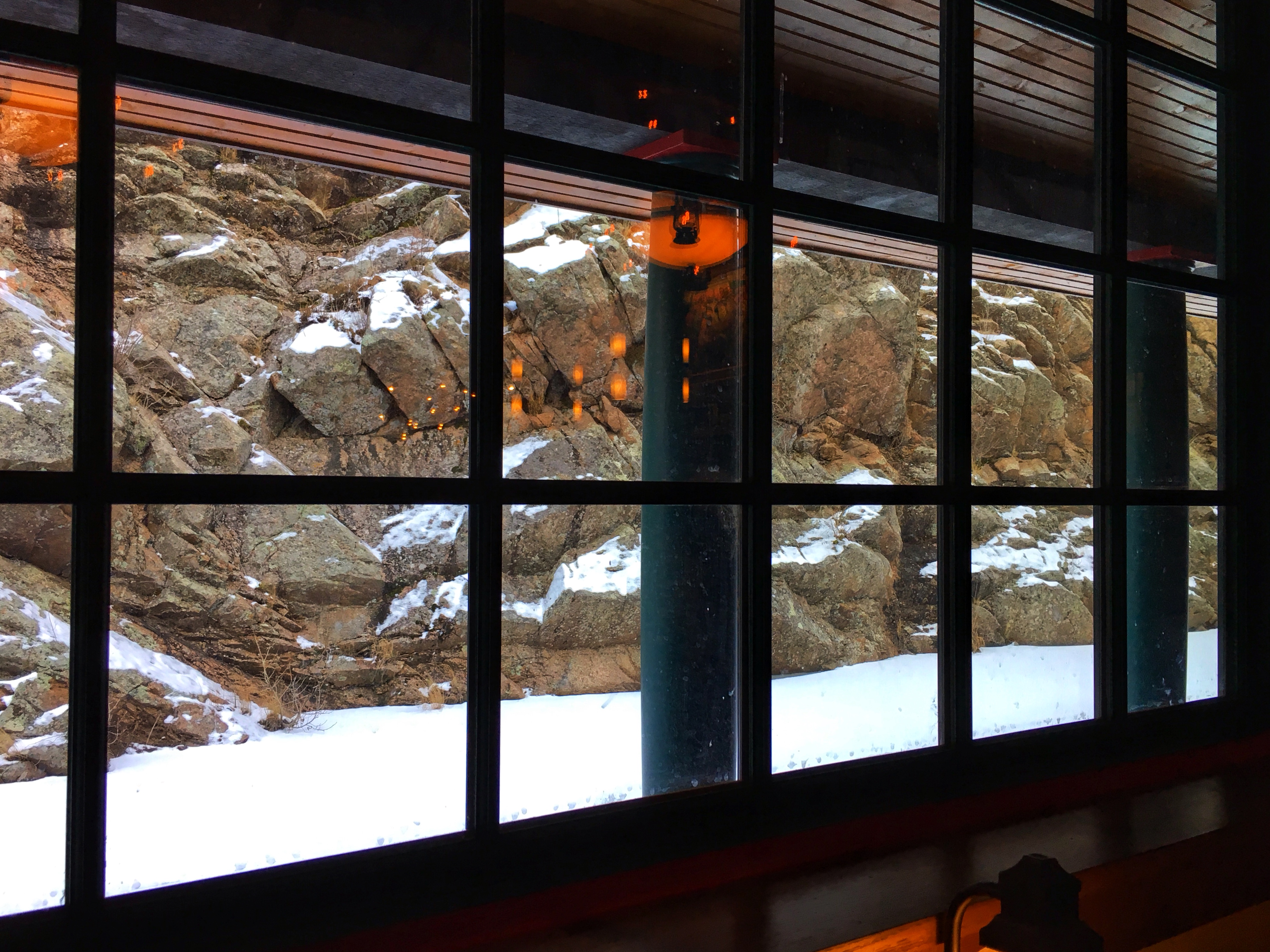 We ordered wild boar nachos and cheeseburgers. Both were amazing. 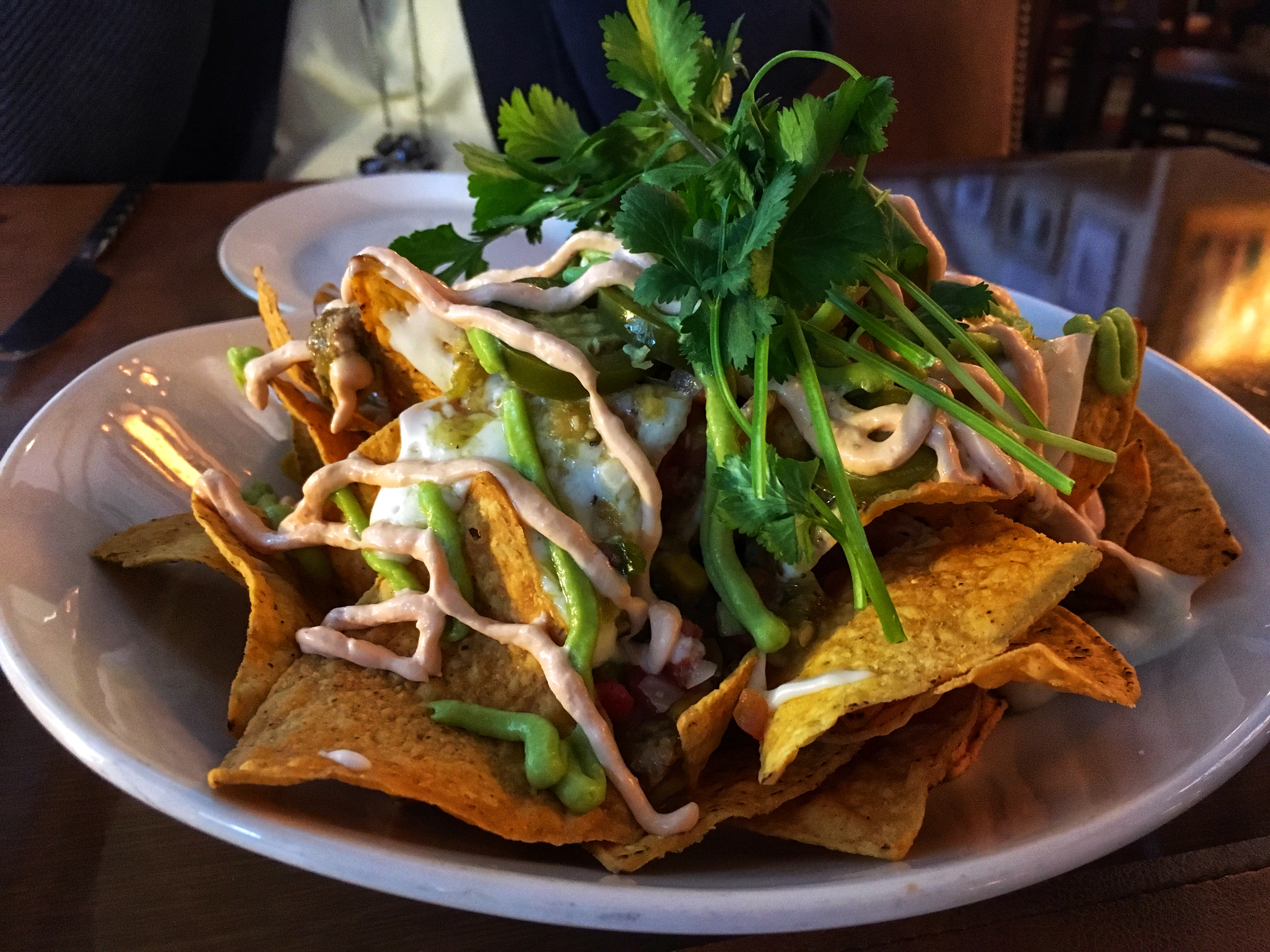 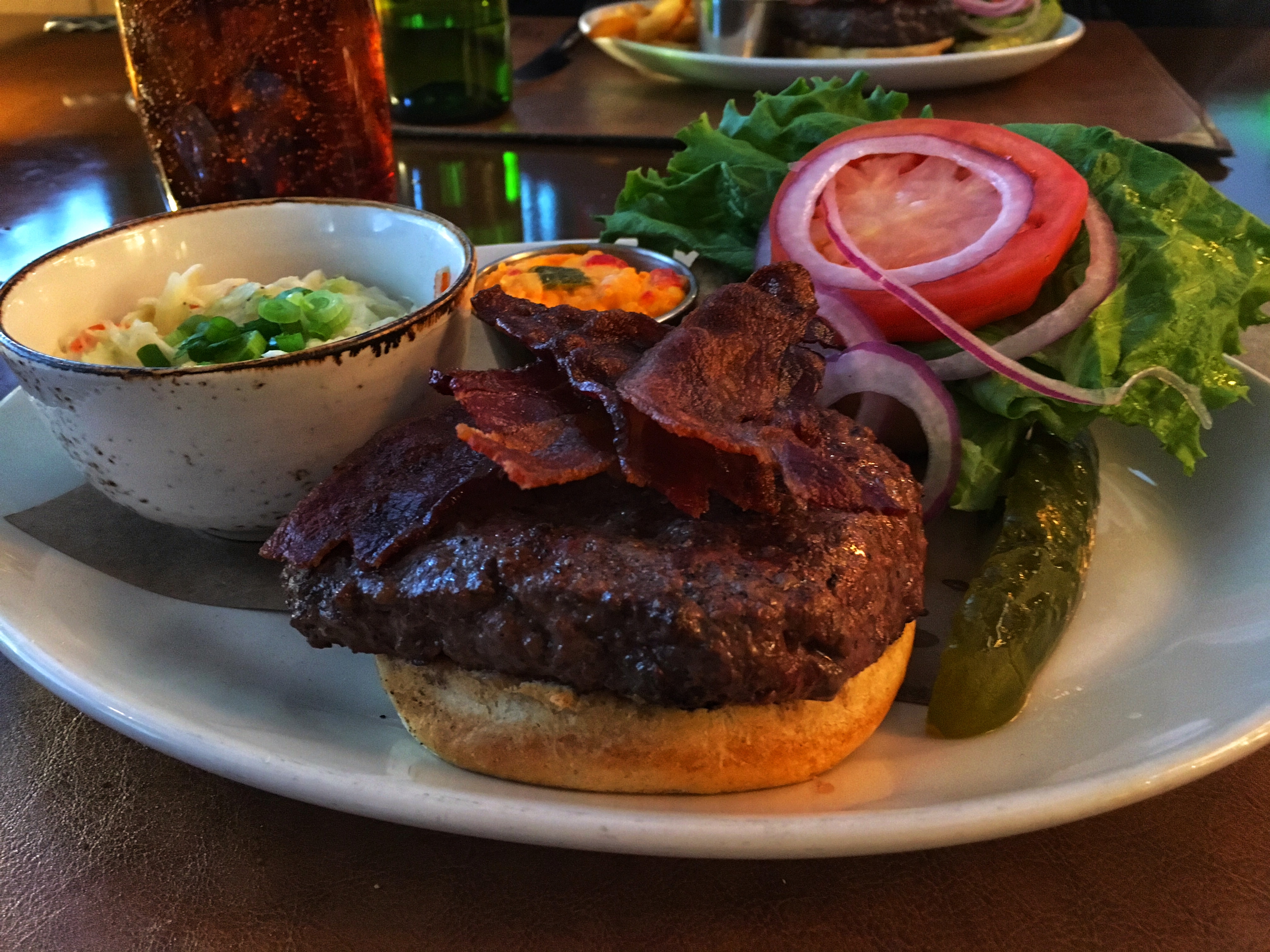 We split a lemon meringue pie for dessert, mostly because it wasn’t dark outside yet and we didn’t want to leave the restaurant until it was. 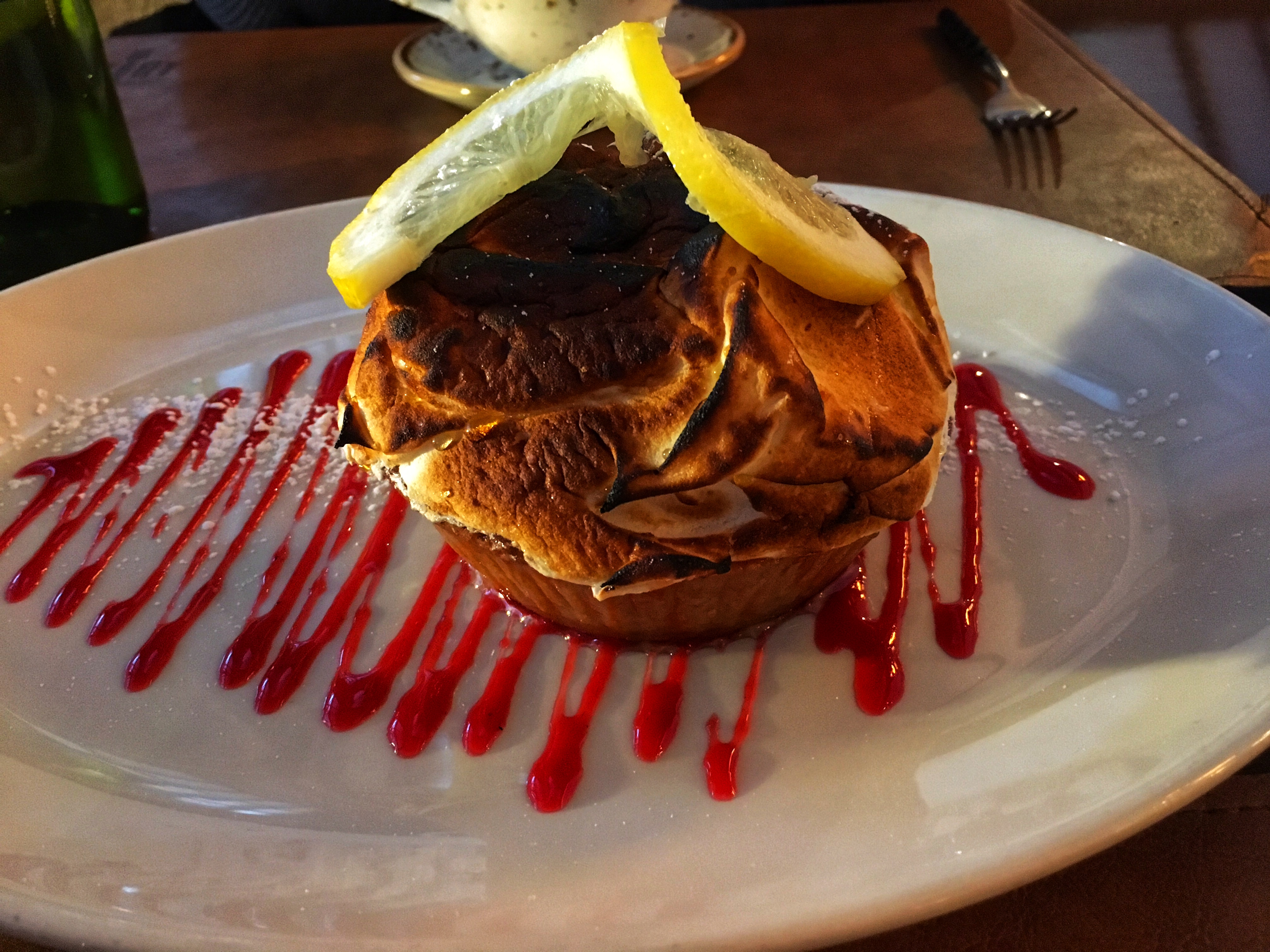 The meal wasn’t cheap, but at least we got great food for the price. The staff were very efficient and friendly and we were in relax mode, which made the experience more enjoyable.

When we got outside, a cool, damp wind was whipping down the canyon and we were not wearing enough coat.

We went back through the tunnel and up the elevator to the platform. It was really cold up there. The next two photos were taken from the same spot, the first with my camera and the second with my phone. The first is closer to what it actually looked like, but I’ve included the second because it shows more detail. 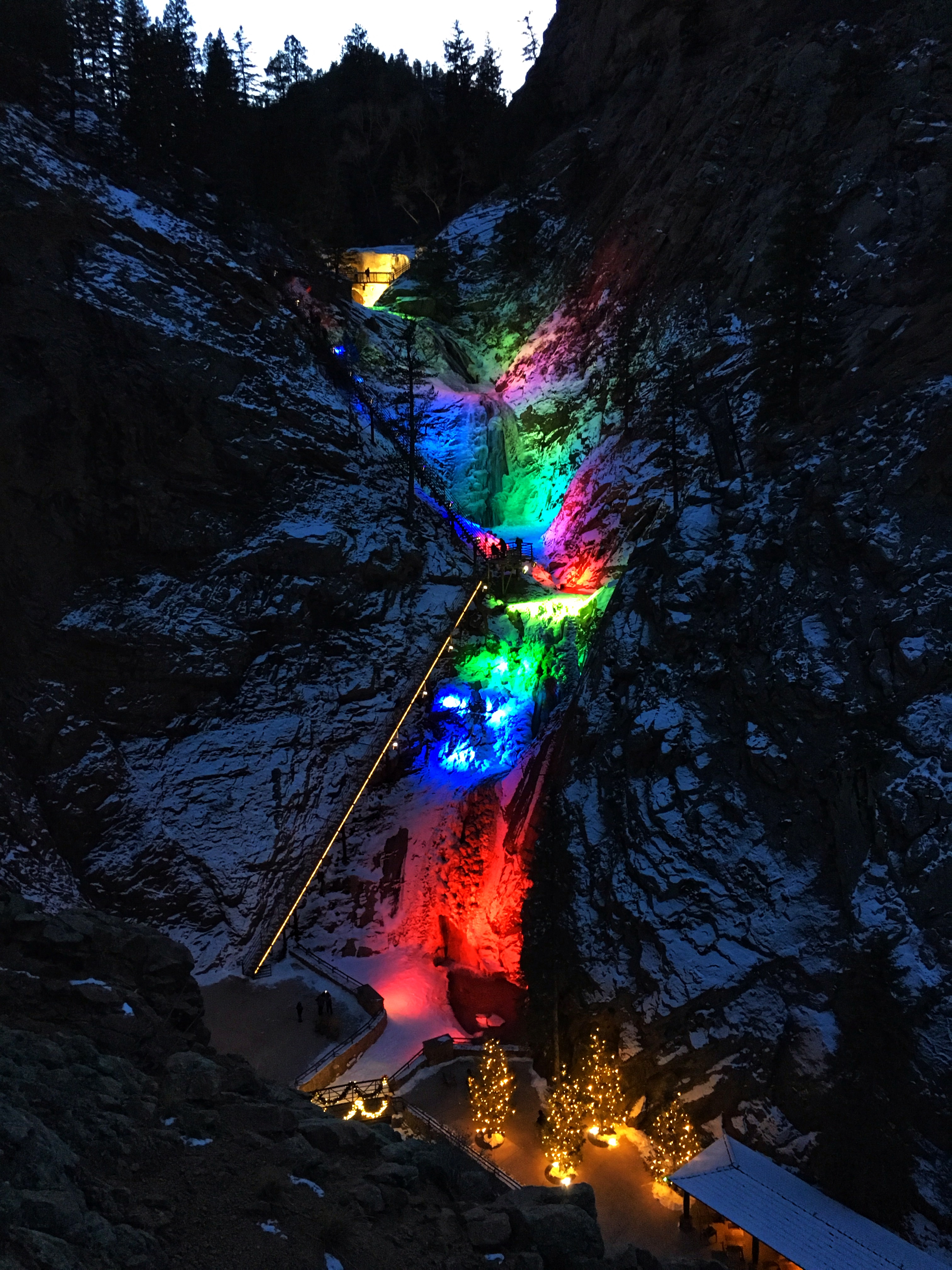 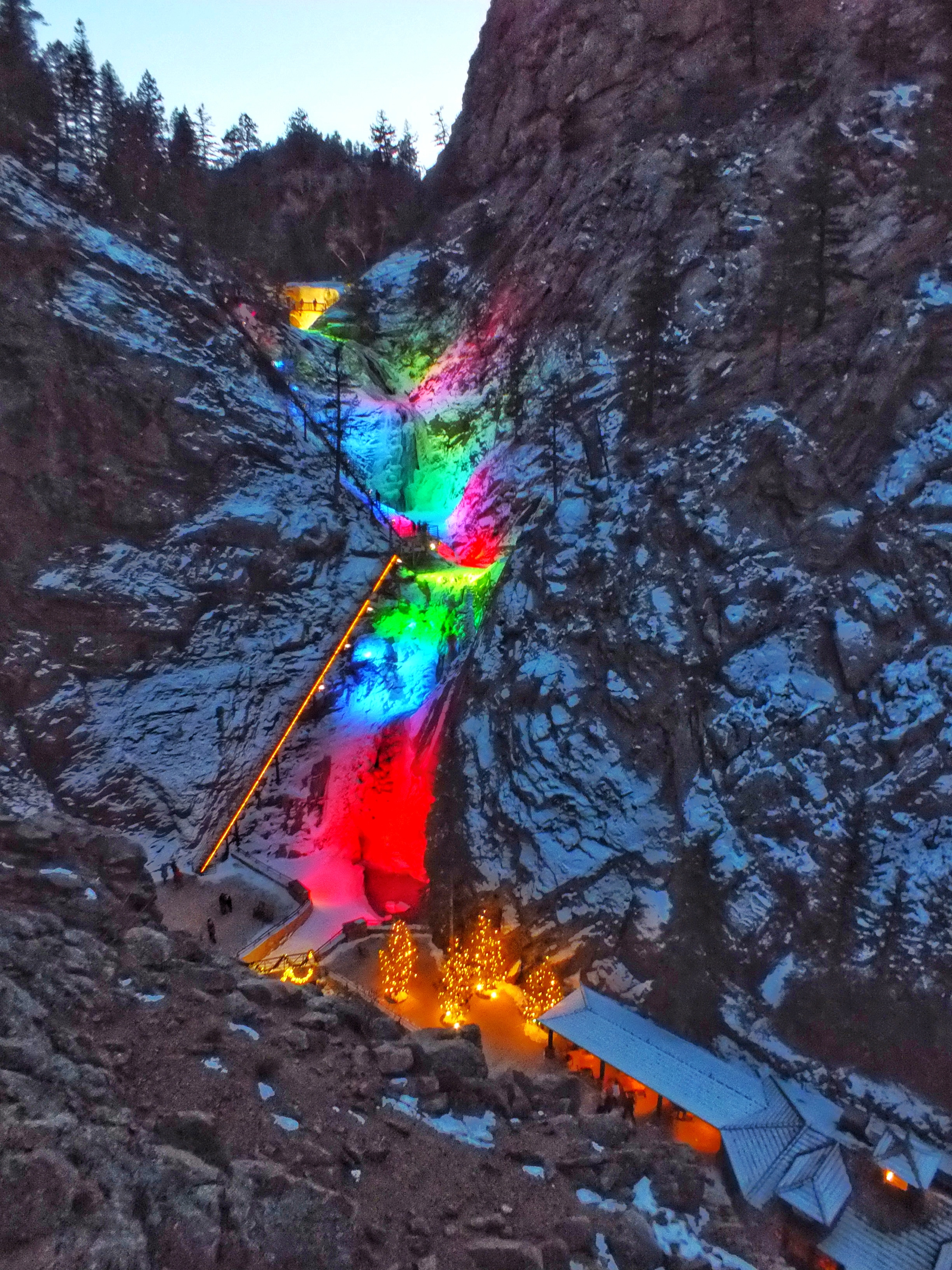 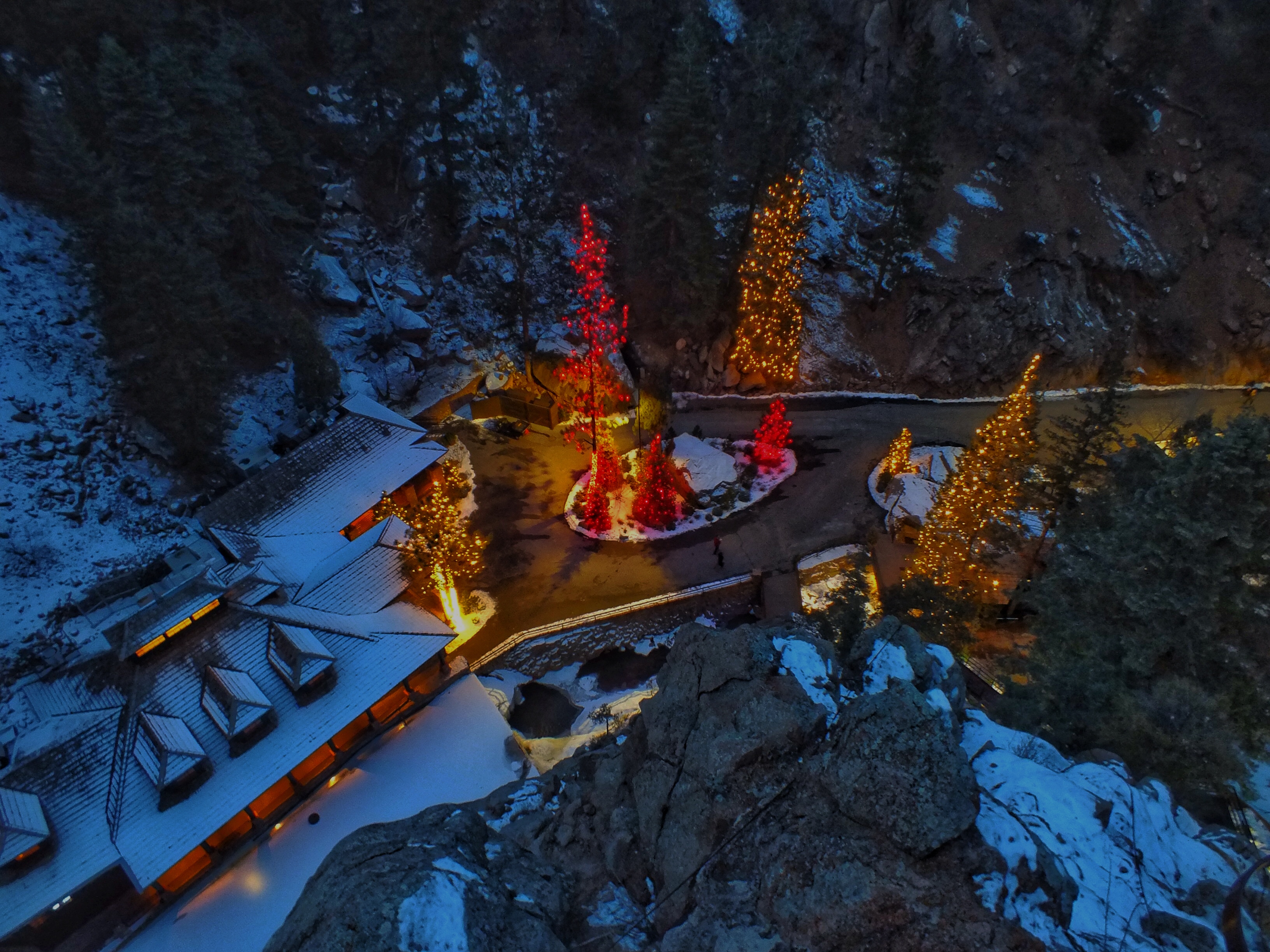 We were cold enough at this point that we went inside the gift shop and paid $2 each for a shuttle ride back to the gate. Once we got off the bus, we stood around for five cold minutes until another shuttle came around to take us back to the hotel. 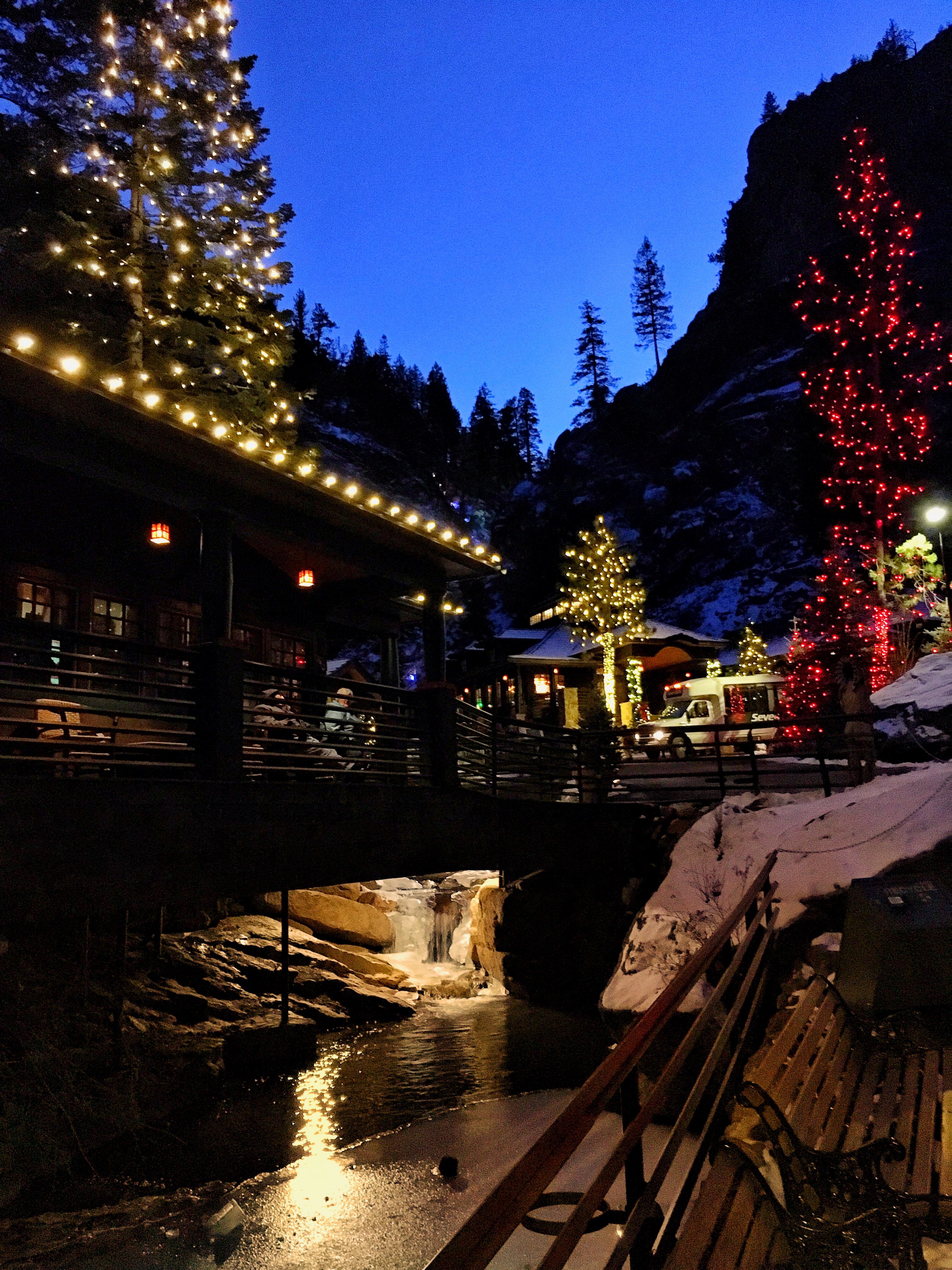 We spent a ridiculous amount of money between park admission, some purchases in the gift shops, lunch, and the shuttle ride, but we had a pleasant, relaxing afternoon in the middle of some beautiful scenery. No regrets.

This entry was posted in Food, Scenery. Bookmark the permalink.