As I neared Richmond, I spotted something rather strange. Every quarter mile or so, there was a fire hydrant, even though the trail ran between a strip of woods and a field with no buildings in sight. Perhaps they were for the convenience of hikers who walked their dogs on the trail? 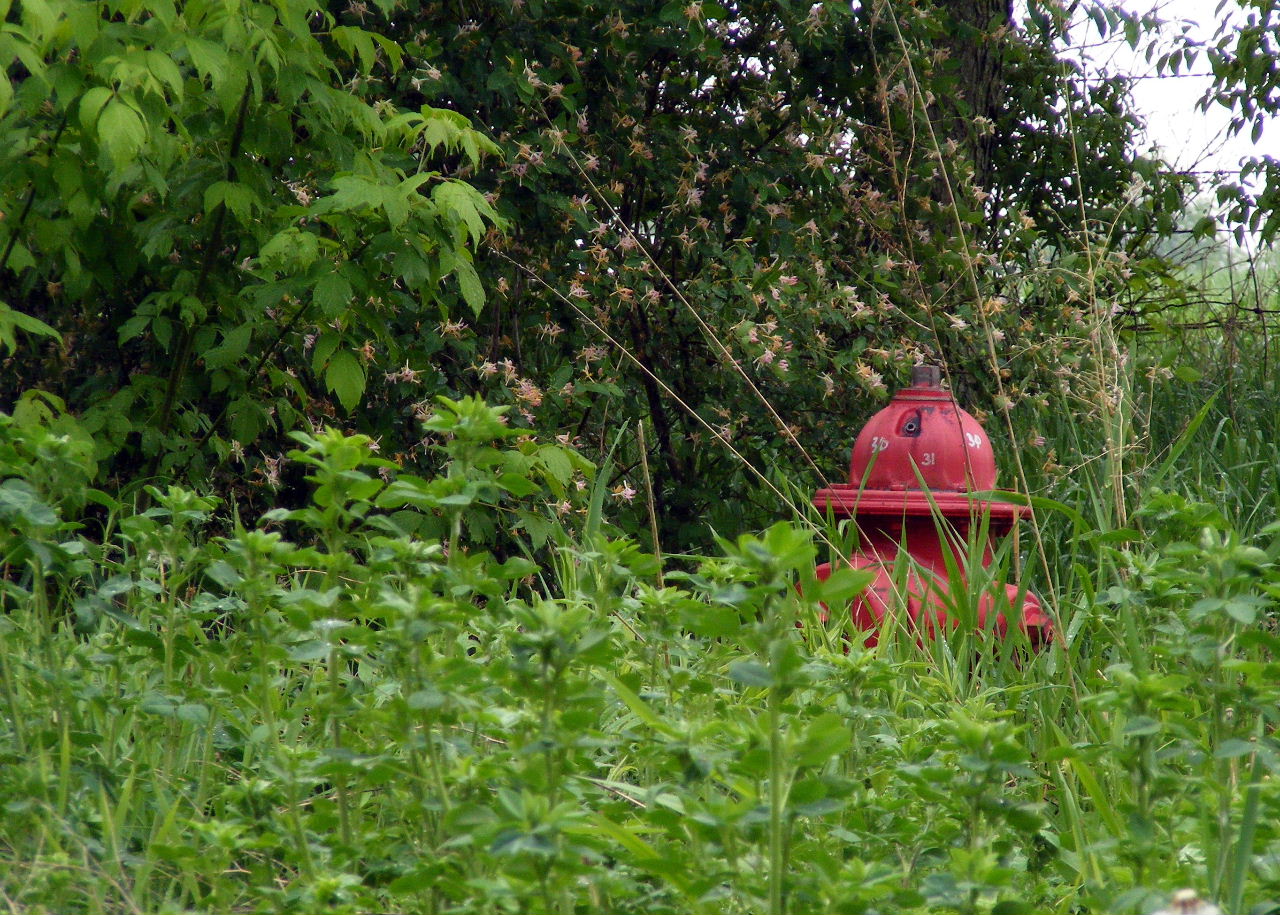 I stopped at a trail-side store and bought a bottle of Slice and a bag of Strawberry-Peanut Butter M&Ms. (I didn’t open them until the evening, when I shared them with my wife and daughter. Our opinion? “Better than expected.”)

Here’s a railroad bridge that crosses the path. Is this art or is it decoration? 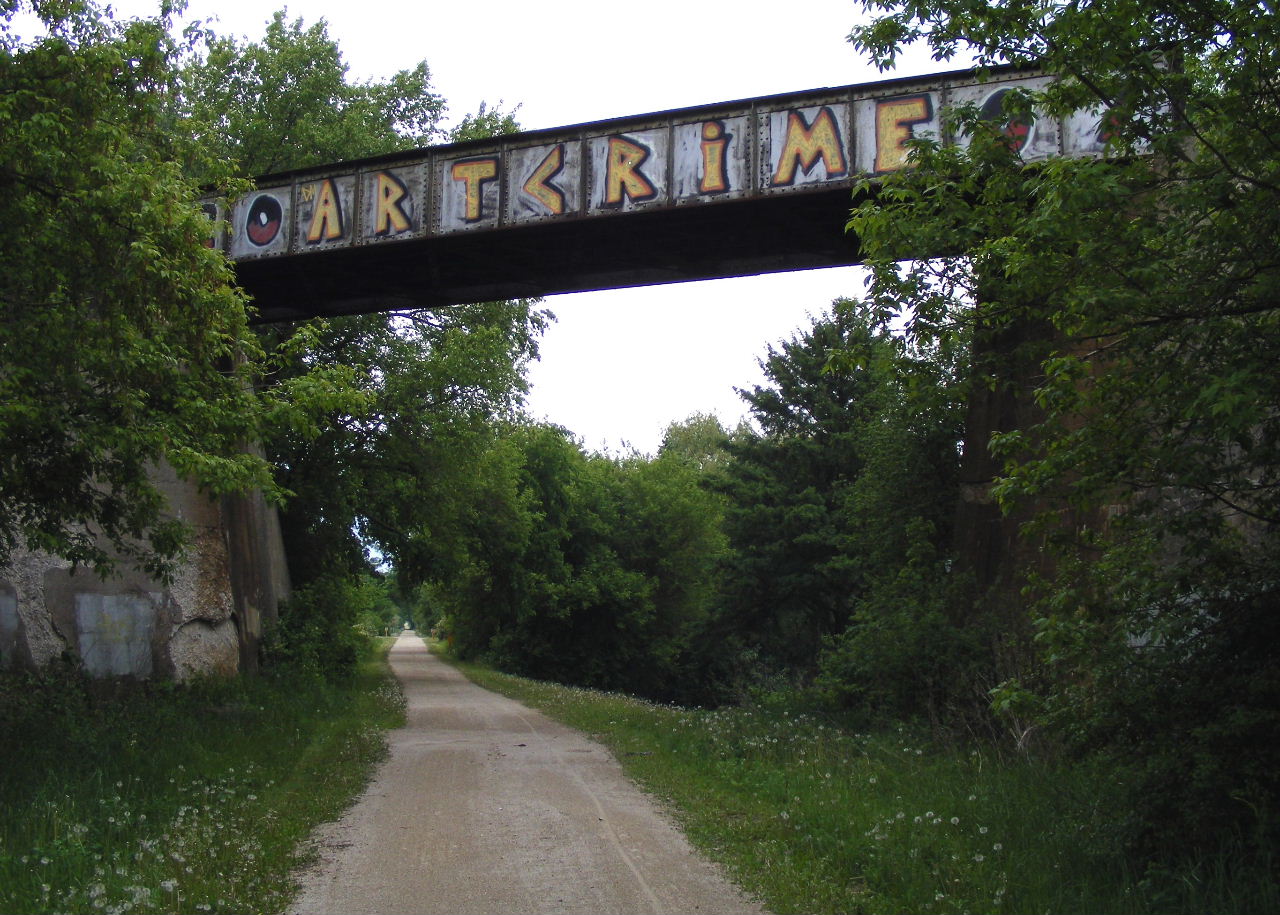 As I approached Richmond, I had a moment in which I thought I was in Arkansas. 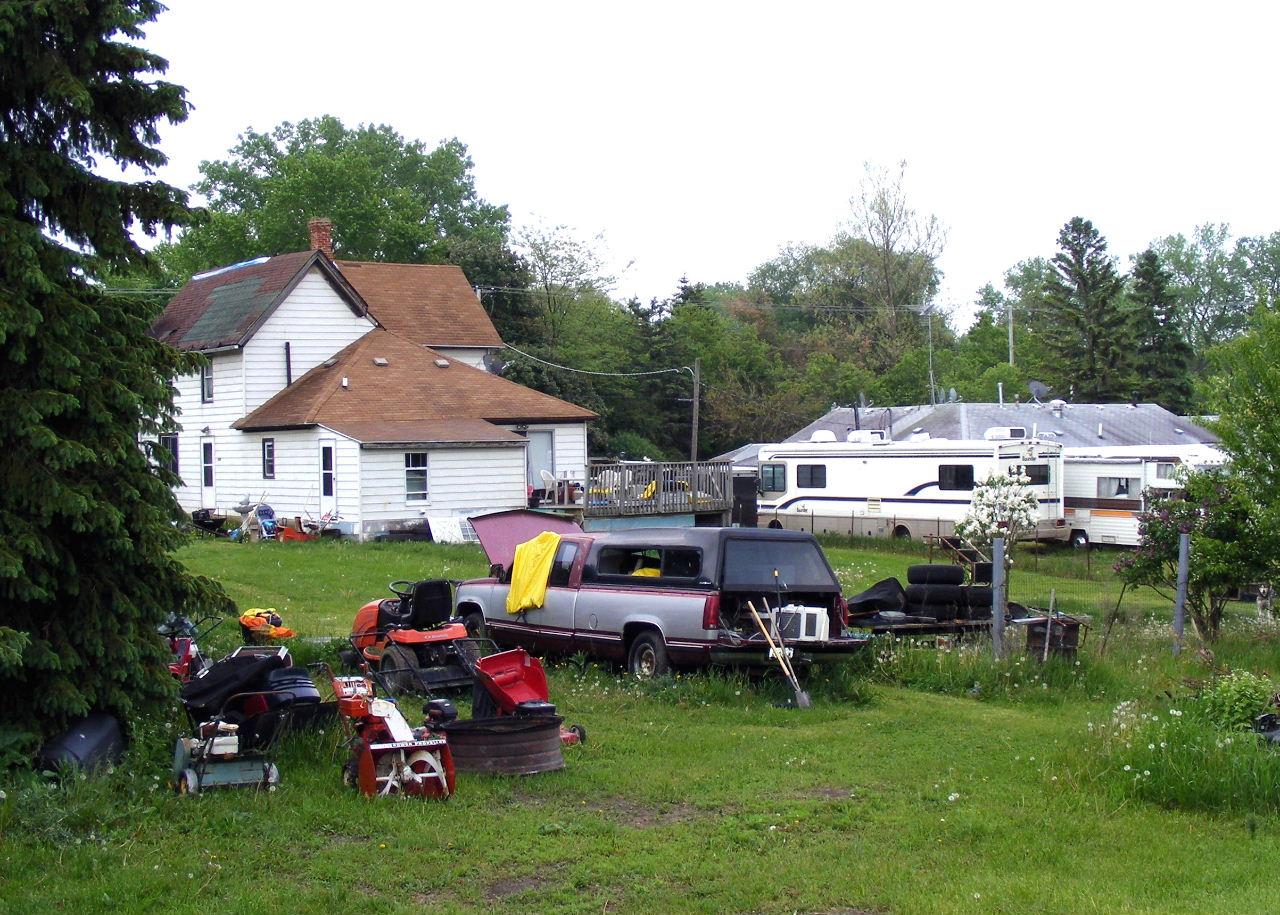 I had the path to myself for three or four miles except for one gentleman on a bike who actually rang his little handlebar bell to let me know he was coming. It was quiet enough that this turtle found the path a good place to lay her eggs. 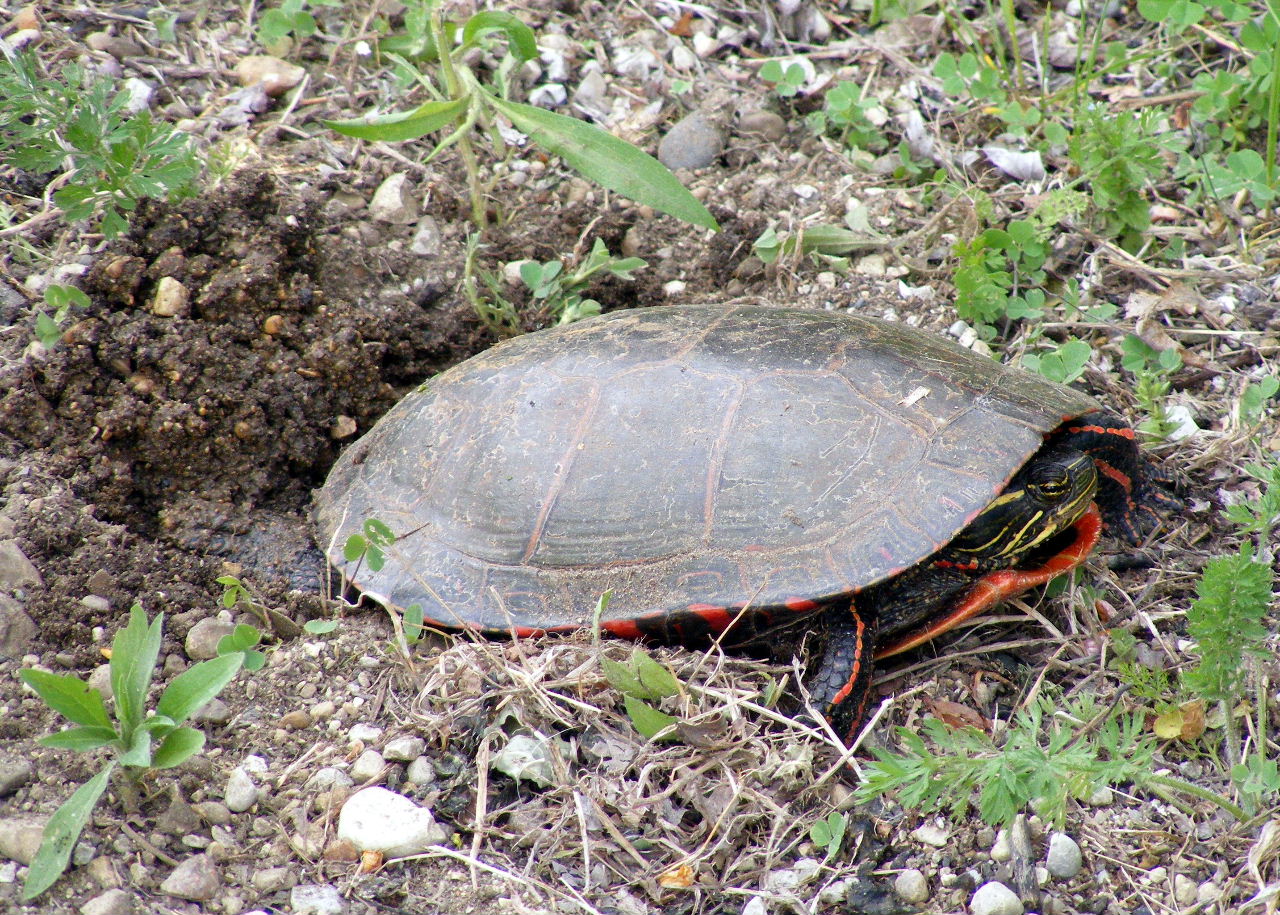 Richmond is full of old frame houses, like this one that is for sale at the moment. 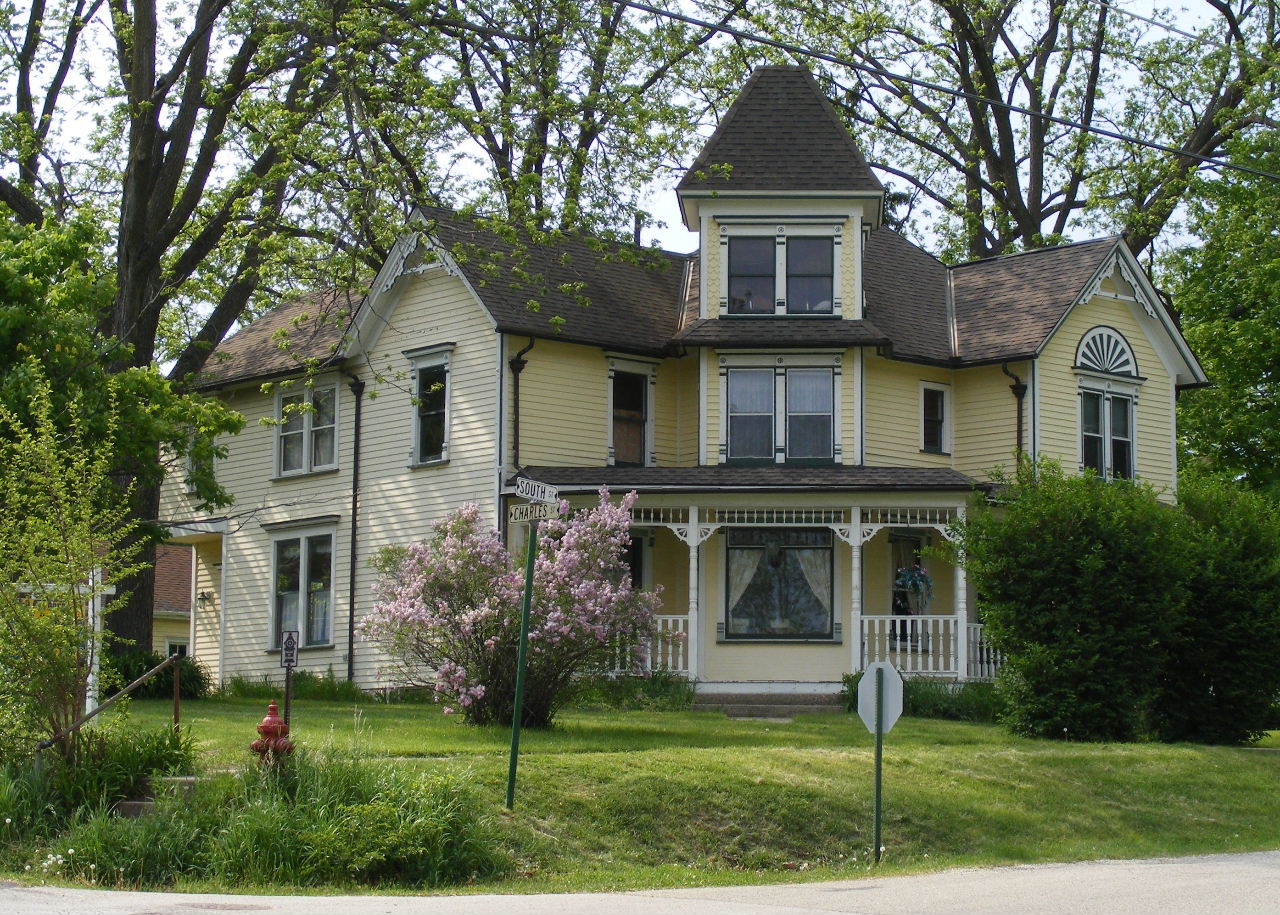 I spotted this old church and immediately thought of American Gothic. I didn’t have a pitchfork, but I found a handy stick and came as close as I could. Is this art or decoration or … 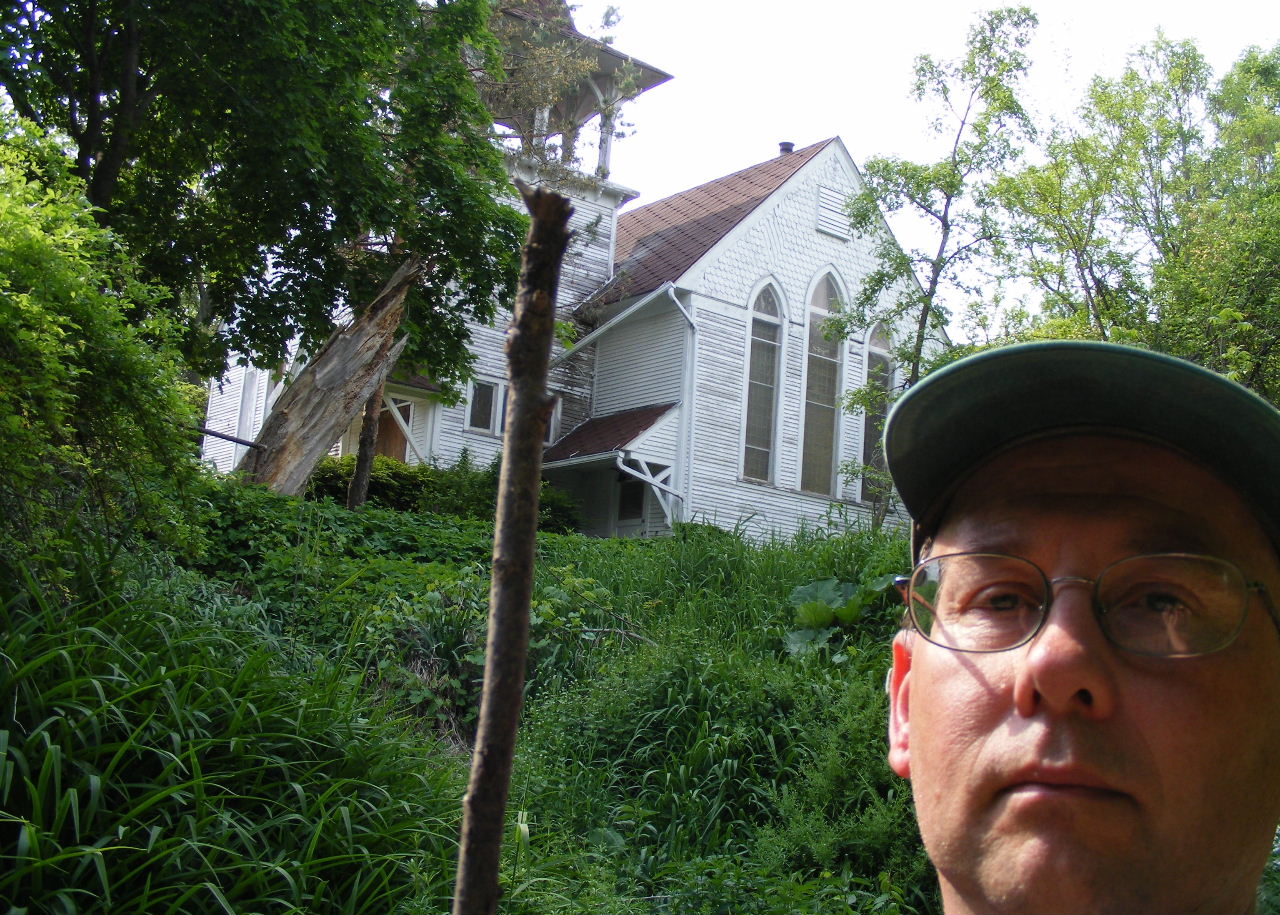 As I walked through Richmond, my wife called to see if I was still alive. I told her she should leave soon to come get me because I was getting close to the Wisconsin border. I got my third wind (or would that be my second second wind?) as I passed downtown. 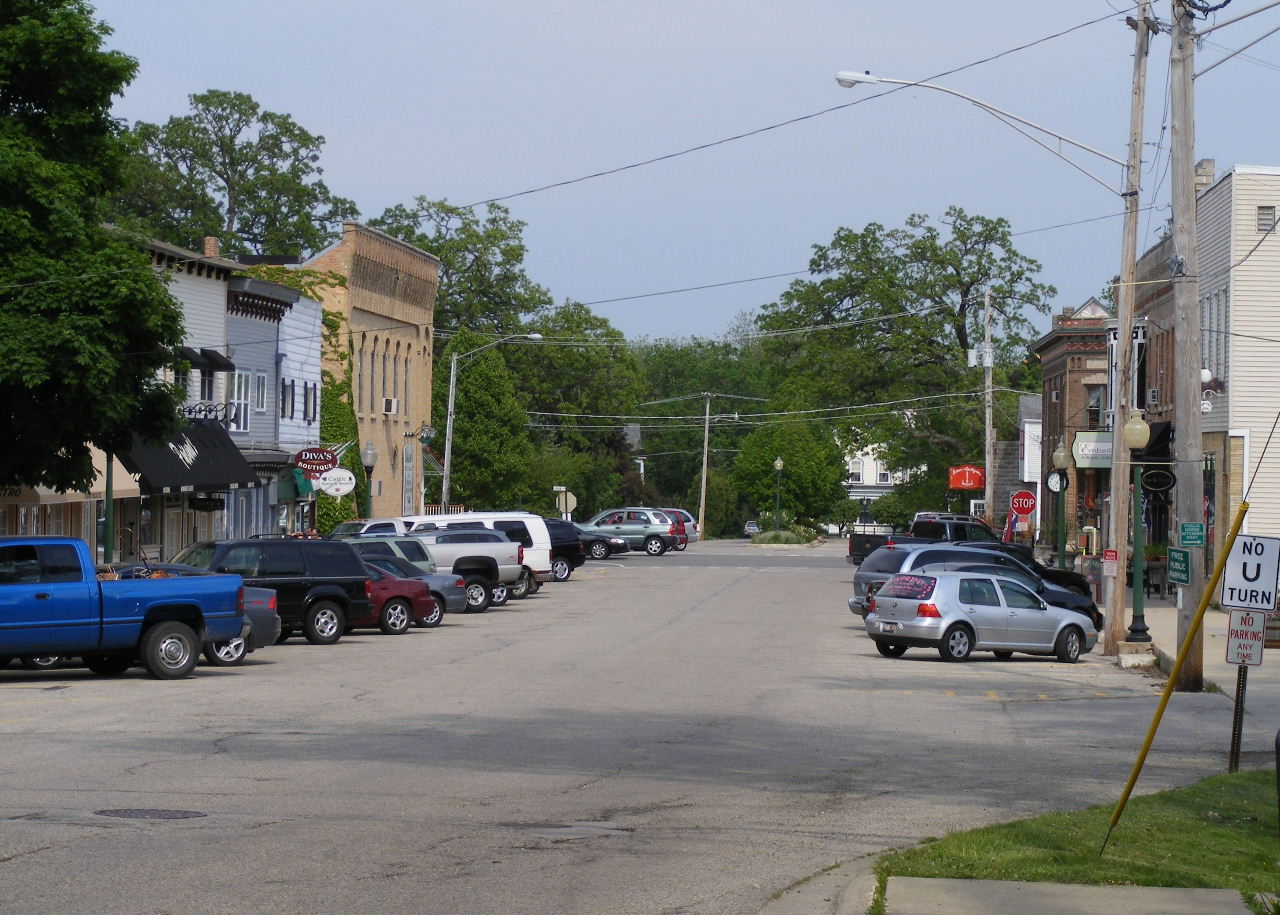 Here, for the record, is the Richmond water tower. 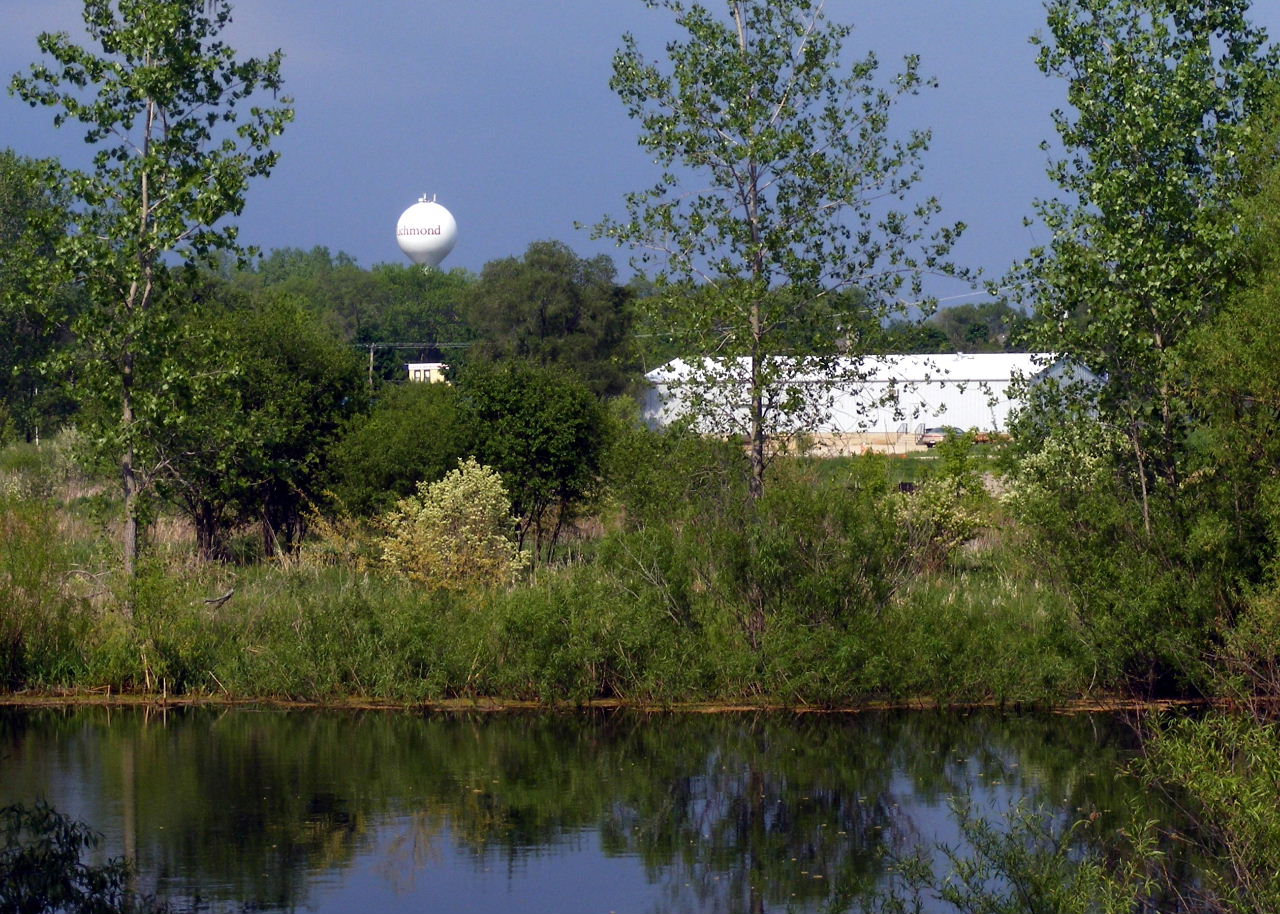 As you can see, the rain had stopped and it was clear and warm again. A couple miles north of Richmond, the trail became noticeably less traveled. 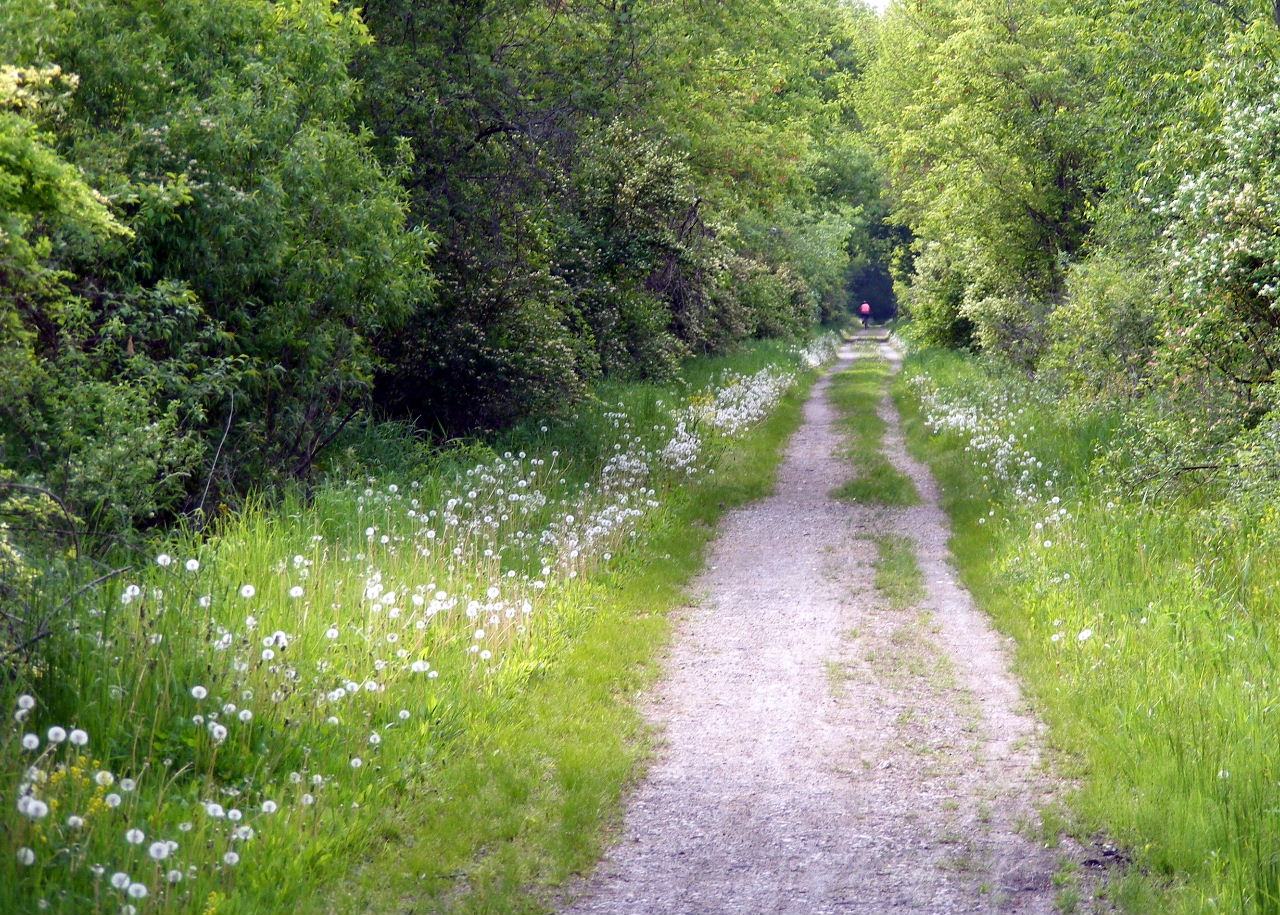 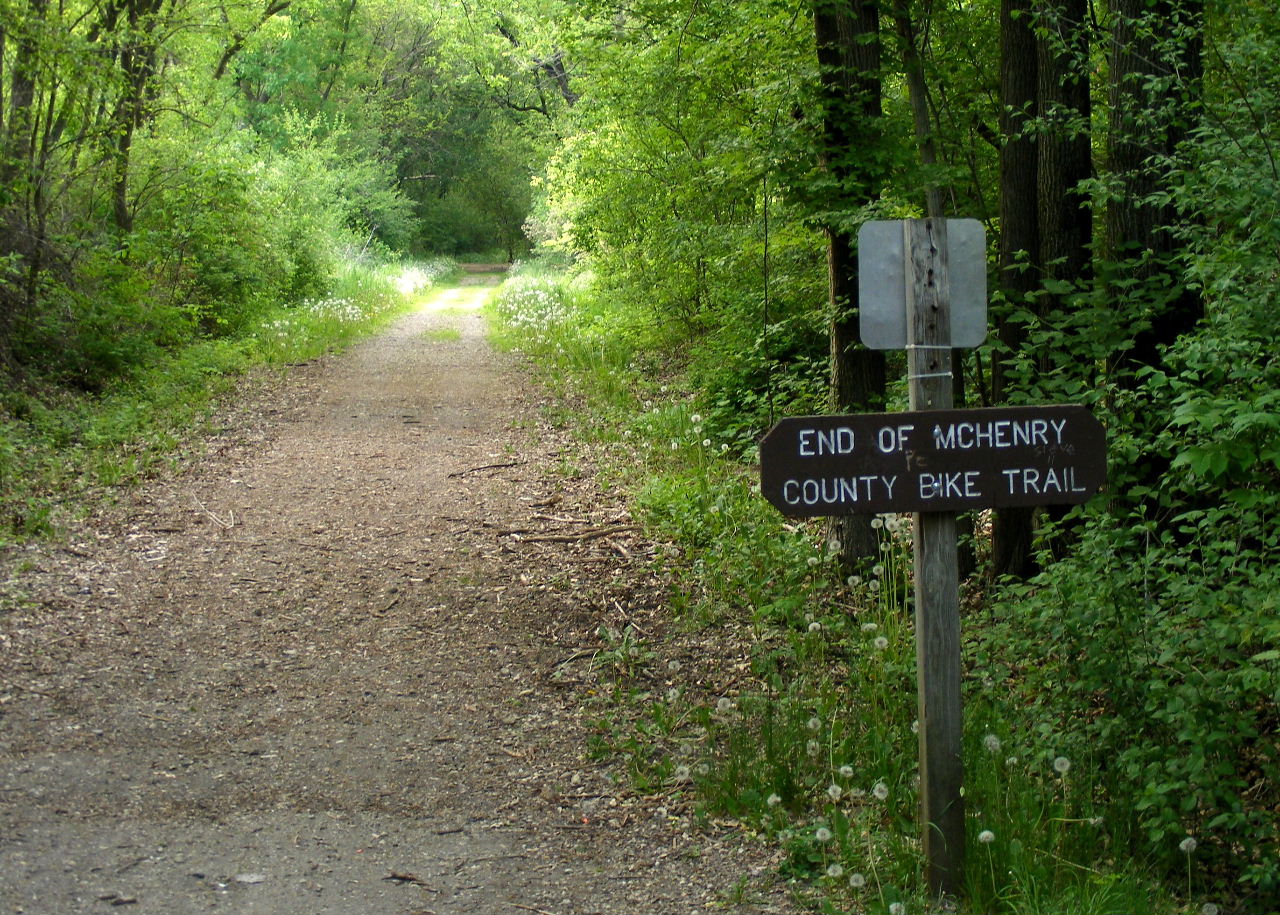 I assumed it meant that I had reached Wisconsin, but it didn’t say that. I wanted some photographic evidence that I’d made it to another state.  Not only that, but the path had veered away from Route 12, where I was supposed to meet my wife. Now what? I didn’t want to walk the two miles back to Richmond. About 50 yards beyond the sign, the path stopped. There was access to a neighborhood, but it was west of the path and I needed to go east. I don’t have GPS on my cell phone (I just barely have cell phone on my cell phone), so I couldn’t direct my wife to where I was.

I spotted a narrow deer path that led through some trees to a field to the east. I walked over and took a look. Across the way, I could see a water tower with Genoa City painted on it. I knew that was in Wisconsin. I also saw the top of a BP gas station sign, that I guessed might be on Route 12. The field was fallow, covered with knee-high grass. I headed across it diagonally. 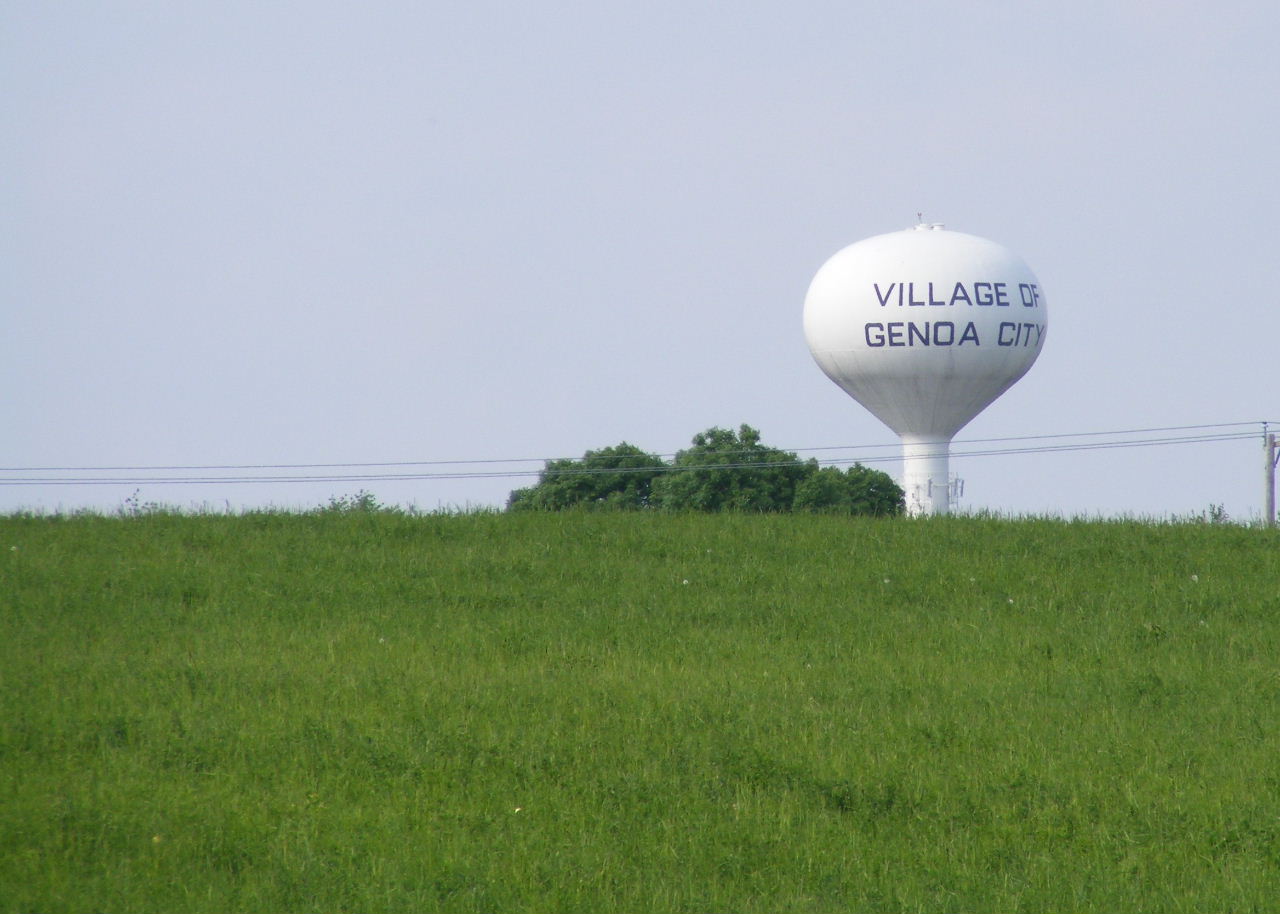 It was a big field. But it turned out that my guess was right. The BP station was just off Route 12, right where the road becomes a limited access highway. I walked along the shoulder, heading back south. 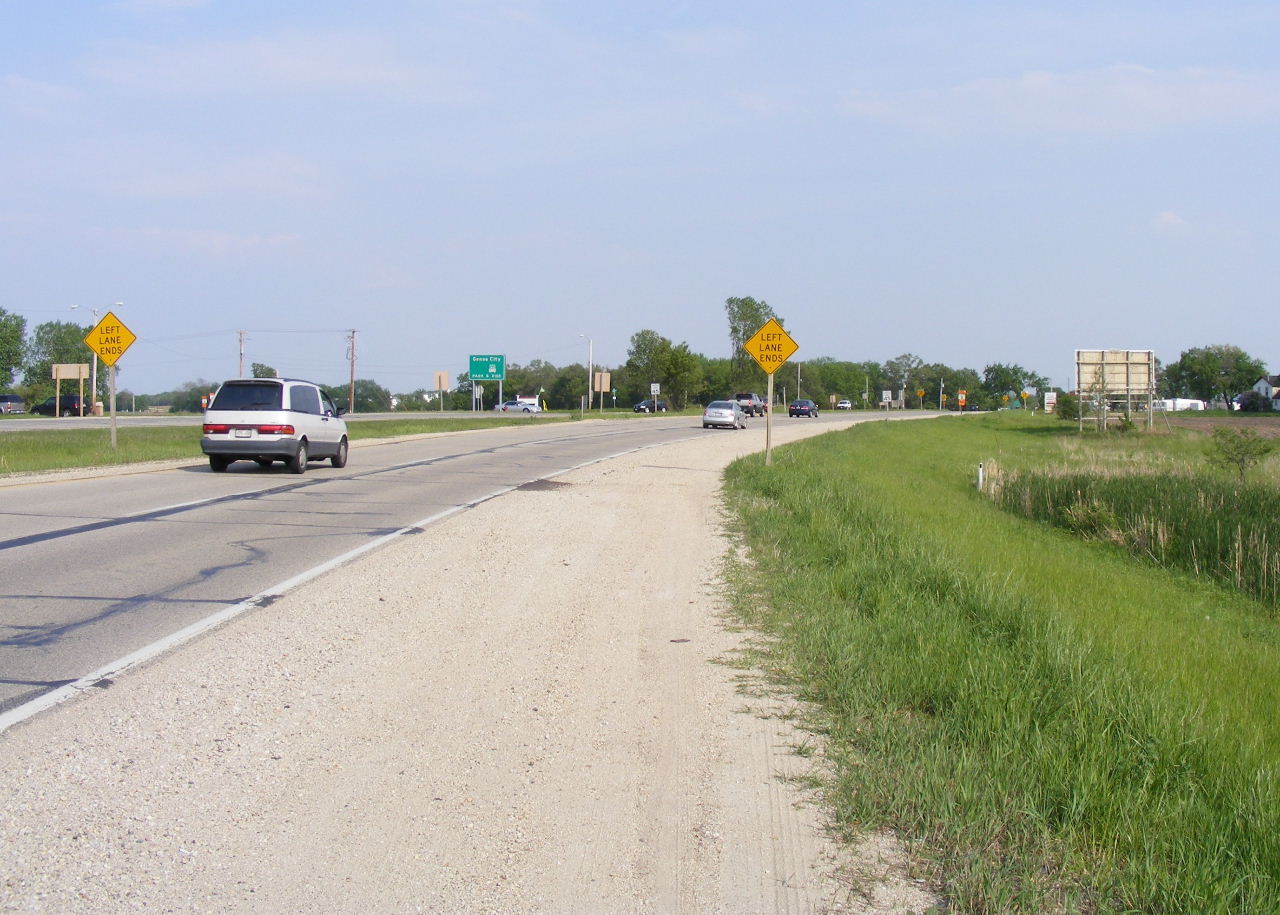 As I walked, I admired the Wisconsin scenery I’d come so far to see. 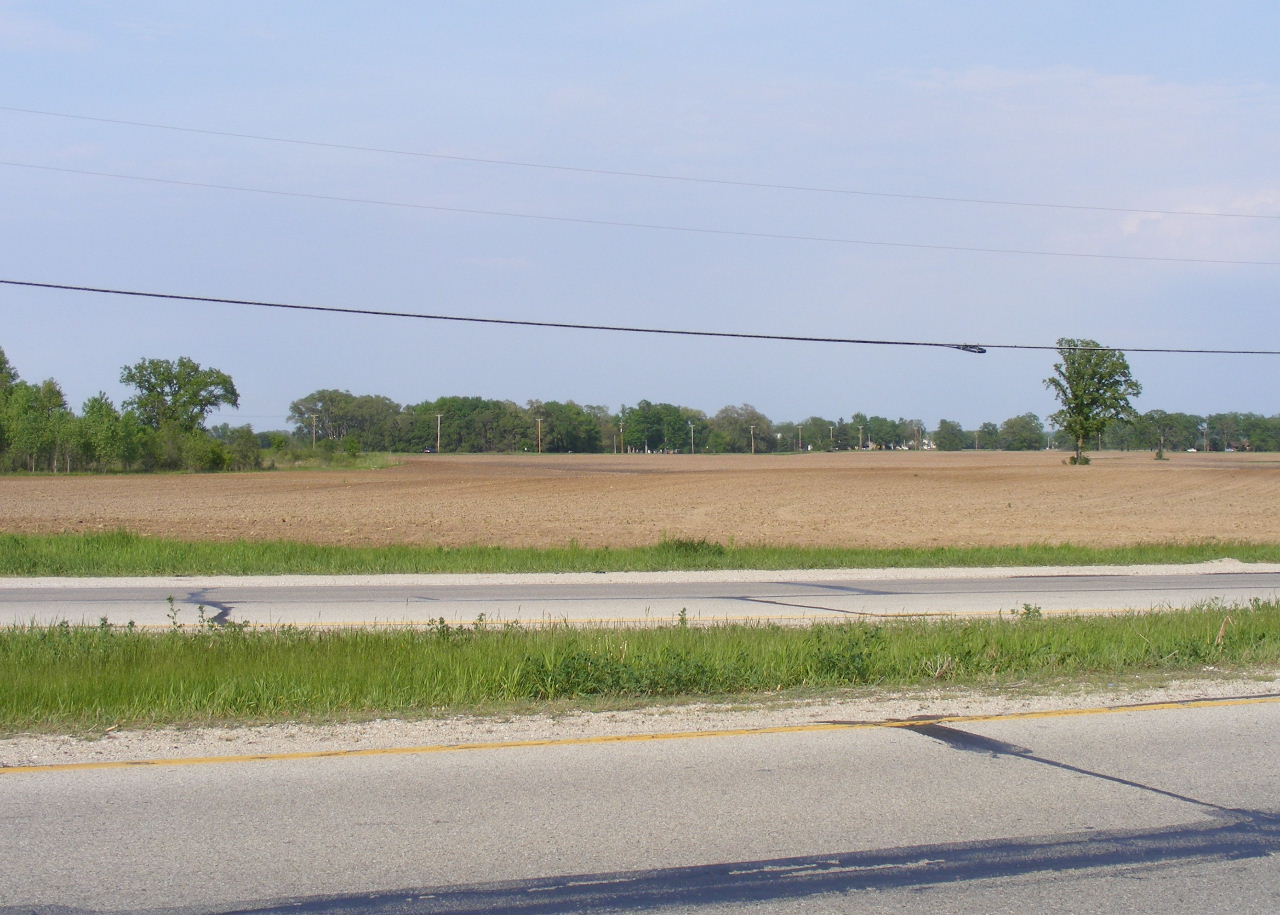 Finally I found the Wisconsin sign I’d been looking for. I was so bushed by this time that I had to take five photographs before I got one in which I managed to smile a little. Since I was last in Wisconsin, it appears that the state has tilted a bit to the left. 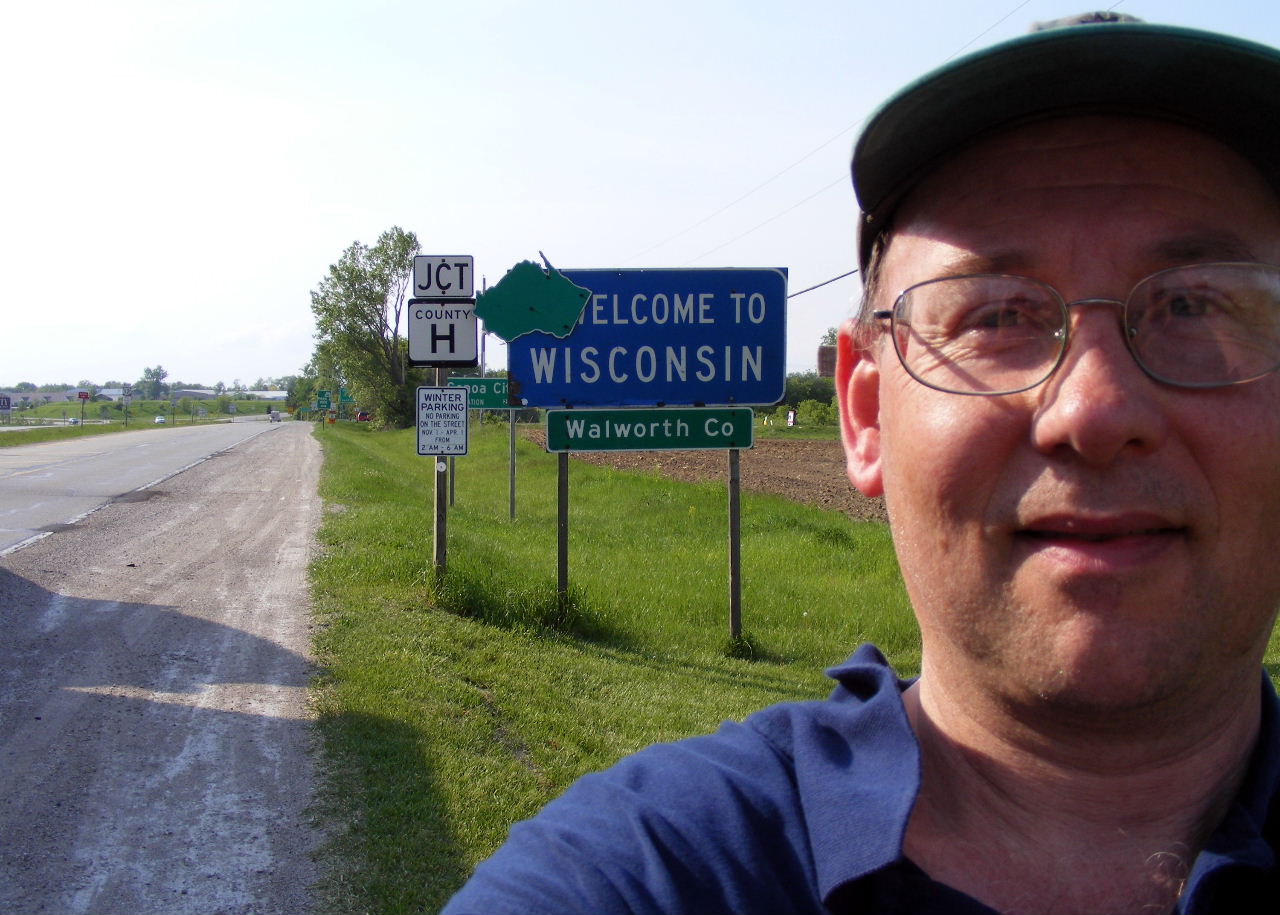 I walked on. My wife called to say she was at our meeting spot, which was maybe half a mile away. When she volunteered to come meet me, I gladly accepted her offer. She picked me up by a truck weigh station. (Have you ever seen one of these in Illinois that was open?) I crawled into the car, and we went for supper at the place where all walks should end. 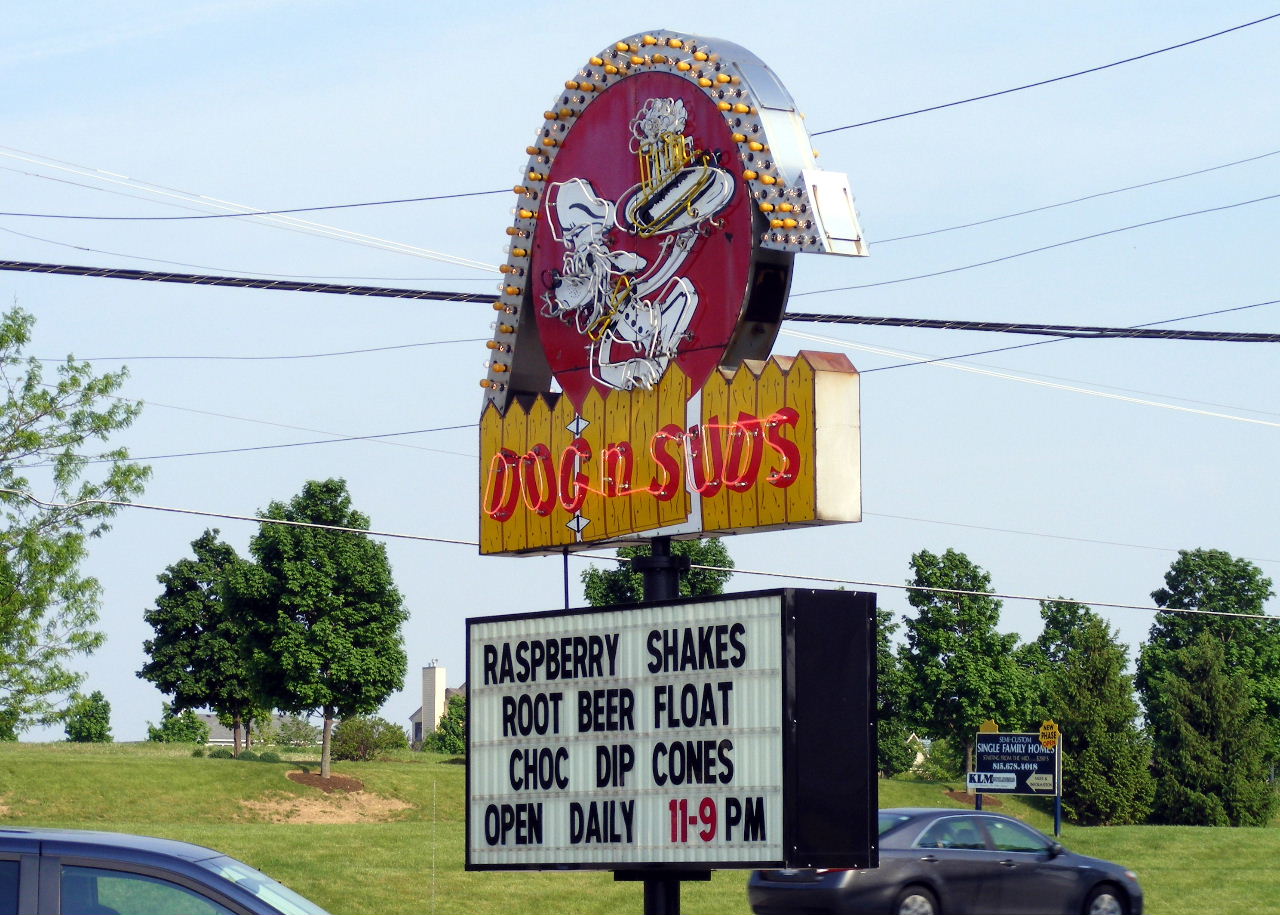 An amazing corn dog and two glasses of root beer refreshed me some, although my muscles started stiffening up as soon as I sat down. The ride home took us most of an hour, and I kept saying, “I walked this!” We made one more stop, which I will cover in a future post.

From the time I left home to the moment I climbed in the car, eight hours and 55 minutes had passed. Based on my somewhat accurate pedometer and the trail map, my best guess is that I walked something very close to 28 miles. 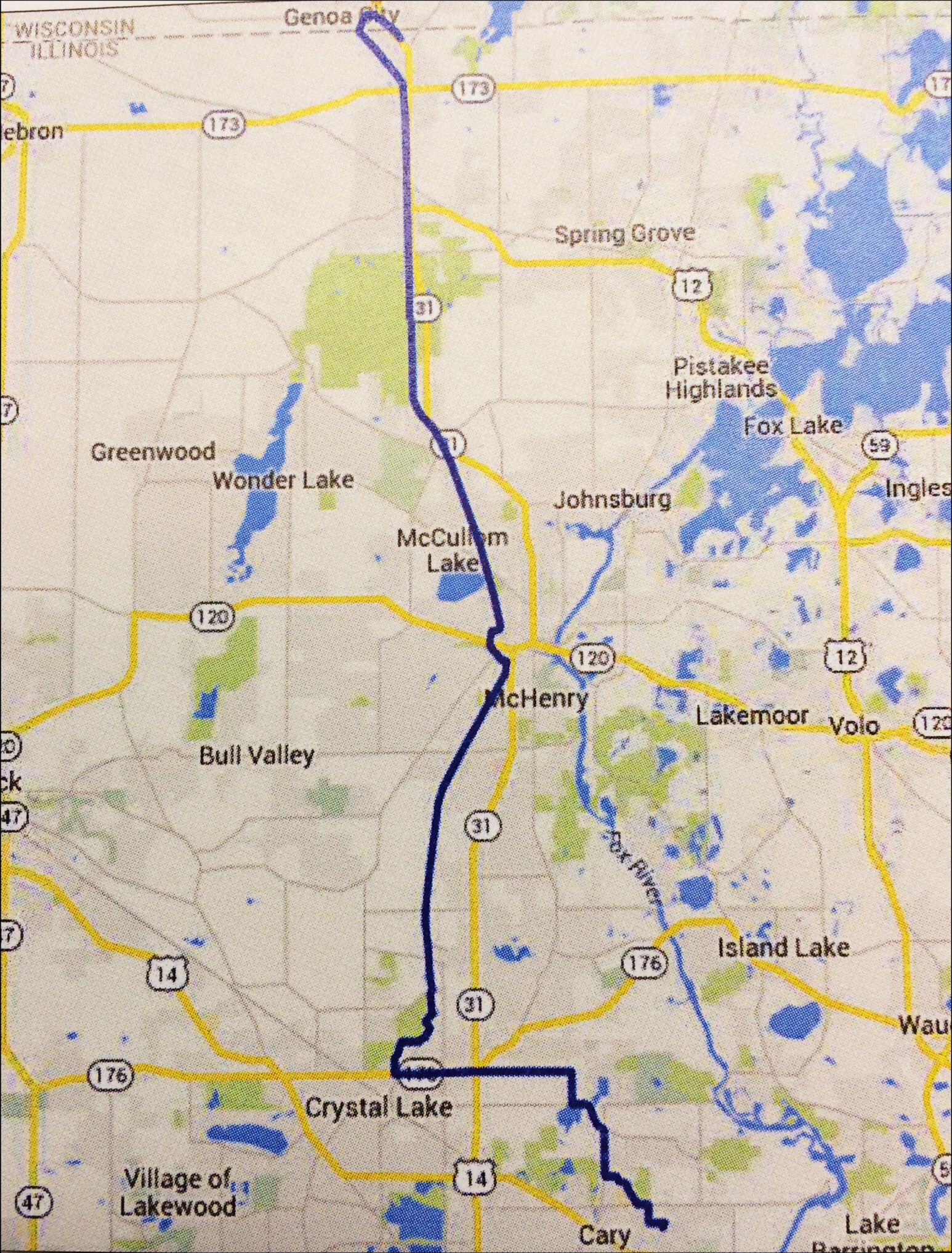